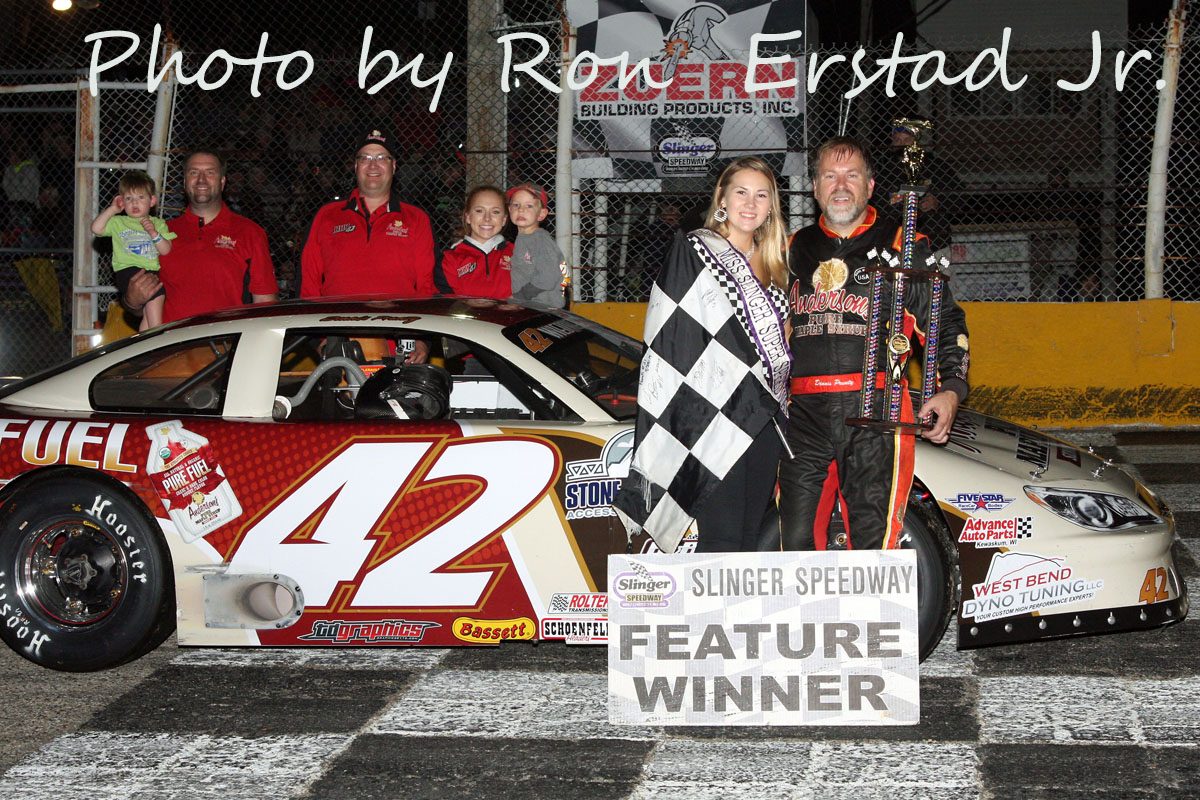 “Some people might think it was easy starting up front but look at who was all behind me,” Prunty said from victory lane after starting on the front row and leading a majority of the 100 laps in the race, “I never had time to rest and I gave it all I got.”

“I feel sorry for Brad,” Prunty continued alluding to yet another runner-up finish for Brad Mueller, “He had to follow one Prunty last week and another Prunty this week so he’s probably upset but he’ll get over it.”

“Dennis was equally as tight as I was on the restarts and after we got four or five laps on the tires,” Brad Mueller stated afterwards, “and at the end there he was just a smidge better.”

“We tried a little something different this week to prevent my car from falling off in the late laps,” Mueller continued, “And I figured Dennis (Prunty) might have felt bad for me, especially after I bought him a beer last night down at the Jackyl concert. I thought that might have given me a chance to get him but I guess not.”

“My guys worked really hard the last few days and we are really happy about this,” said the 15-year-old Luke Fenhouse after wrapping up an outstanding race by finishing in third, just inches behind Mueller, “We had a really good car tonight and I wish we could have got the 89 (Mueller) there and the 42 (Prunty) was really good but I’m proud of this effort.”

“We had a rocket ship tonight and I knew we had to finish at least twelfth or better to wrap up the championship no matter what happened,” Steve Apel told the crowd after capturing his fourth super late model track championship,” It was an awesome night and it’s really cool to see the stands filled because this is why we race, to put a show on for the fans.”

R.J. Braun and Dennis Prunty paced the field to the green flag and Prunty charged to the lead from the outside at the start while Steve Apel also used the high lane to move into second. Conrad Morgan and Alex Prunty raced with Braun for the third position just ahead of Brad Mueller and Rich Loch as the first caution flag waved on lap eight when Mike Held’s car hit the turn one wall after suffering a mechanical failure. Dennis Prunty was able to out-duel Apel for the lead on the restart as Alex Prunty began to challenge Apel for second as Morgan and Loch followed close behind. With Alex Prunty and Apel side by side on the backstretch, Apel looked to get to the inside lane as behind him, Morgan had the same idea and when he tried to look to the inside of Apel, the rear of Morgan’s car clipped the front of Rich Loch’s which sent Morgan’s car spinning across the track entering turn three. To avoid a direct hit on Morgan’s spinning car, Ryan Farrell instead cut right and hit the turn three wall, severely damaging his car as the caution flag waved. All drivers with the exception of Farrell were able to continue and Dennis Prunty held the lead over Apel and Alex Prunty while Morgan retained the fourth position after Loch utilized the “tap out” rule and took blame for the incident.

Apel was able to challenge Dennis Prunty for the lead momentarily for a few laps as racing resumed but Prunty was able to power ahead upon exiting the turns to keep the lead as Apel dropped into a battle for second with Alex Prunty. With Dennis Prunty out front, Apel and Alex Prunty staged an intense battle for second while Brad Mueller began to close in from third. The Apel and Alex Prunty duel came to a head on lap 57 when contact between the cars sent Alex Prunty spinning off the backstretch to draw the caution flag and place both drivers at the rear of the field for the restart. The Apel and Alex Prunty incident enabled Brad Mueller to advance into second place as Dennis Prunty continued to lead. Mueller challenge Prunty briefly for the lead as racing resumed but once again Prunty was able to use the outside groove off the turns to keep the top spot. Behind the top two Luke Fenhouse and Conrad Morgan raced for third place as both Steve Apel and Alex Prunty began to slice their way forward from deep in the field. Alex Prunty’s race and championship hopes ended on lap 65 when contact between himself and Grant Griesbach sent his car sailing hard into the turn three wall as the incident retired both cars and produced the final caution flag of the race. Mueller made several attempts to unseat Dennis Prunty from the lead during the closing laps but each time Prunty would prevail while Fenhouse looked on from third. Dennis Prunty began to ease away in the final ten laps as Fenhouse began to challenge Mueller for second. Dennis Prunty drove to the victory while Mueller edged Fenhouse for second in a close finish. Conrad Morgan finished fourth and Steve Apel was fifth. Rich Loch finished sixth followed by Brad Keith in seventh and R.J. Braun in eighth. Chris Blawat and Nick Wagner rounded out the top ten.

Alex Prunty won the super late model fast dash and super late model qualifying produced an interesting story as Luke Fenhouse and Conrad Morgan were separated by just .005 on the race track, they are separated by 56 years in age as the 15-year old Fenhouse turned in a lap at 11.190 seconds to set fast time while the 71-year old Morgan timed in second at 11.195 seconds.

Jacob Nottestad outdueled Jack Stern to nail down his eighth feature victory of the season in the 50-lap late model main event. Ryan Gutknecht finished a close third while Jerry Eckhardt finished fourth and Jakob Hassler was fifth. Adam Peschek and Ryan Gutknecht were the winners of the late model heat races and Jacob Nottestad also was the fastest qualifier with a lap at 12.069 seconds. 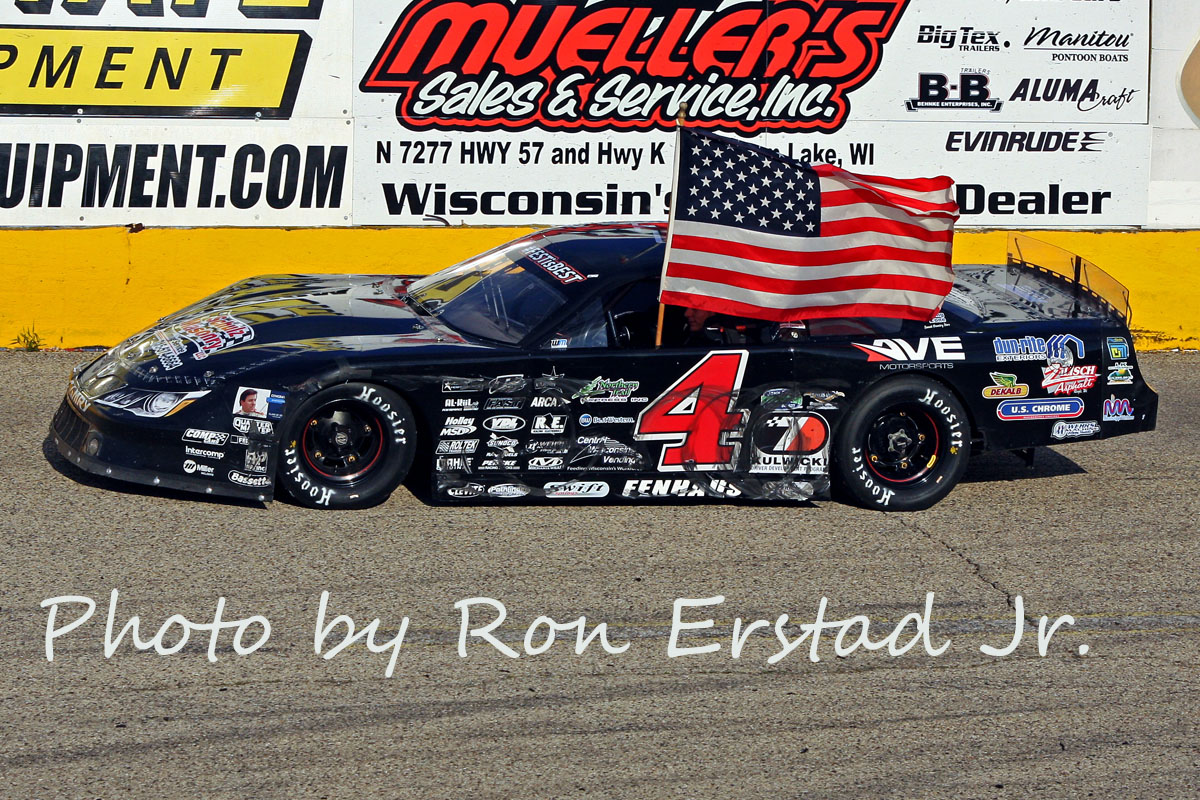 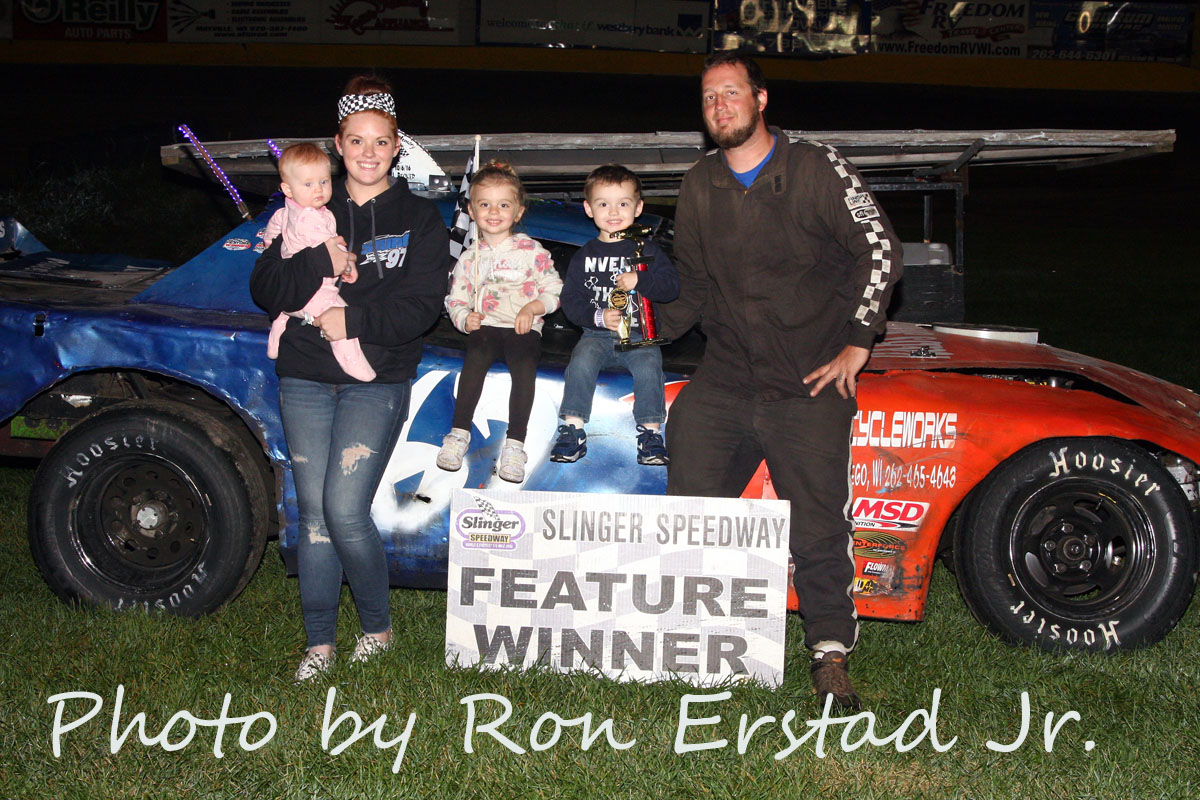 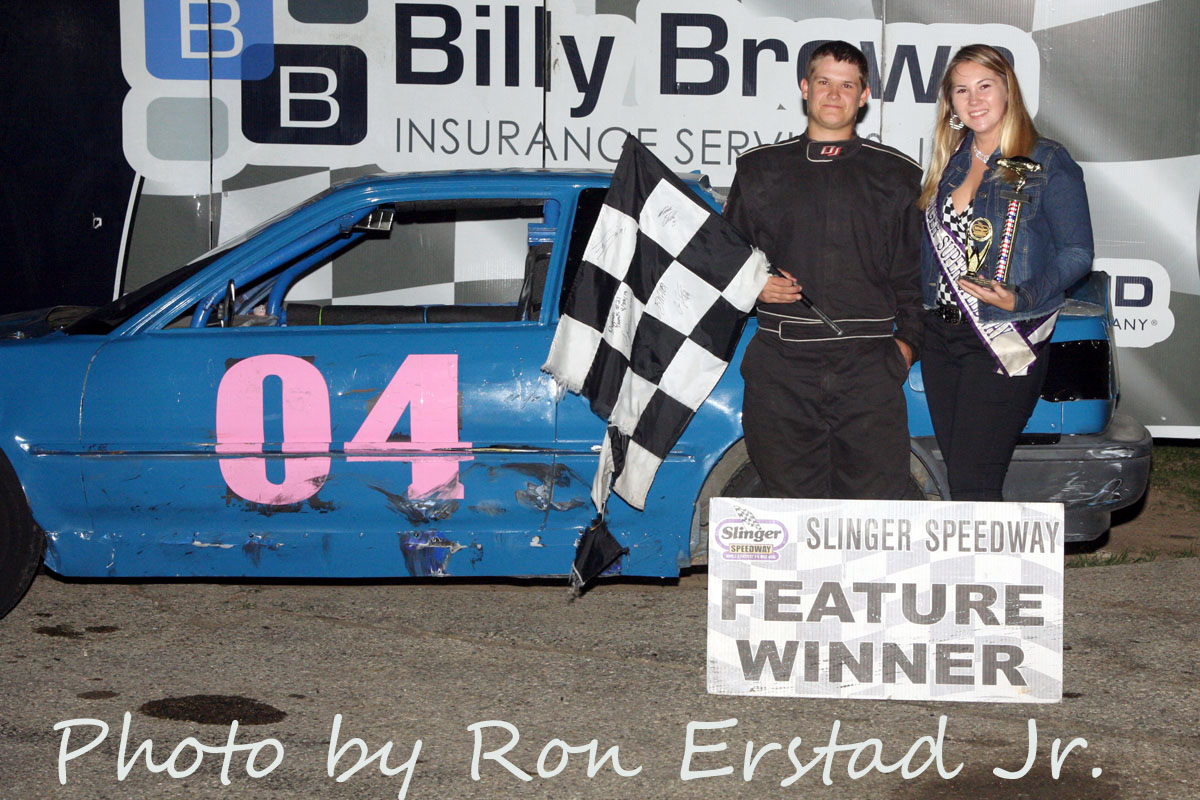 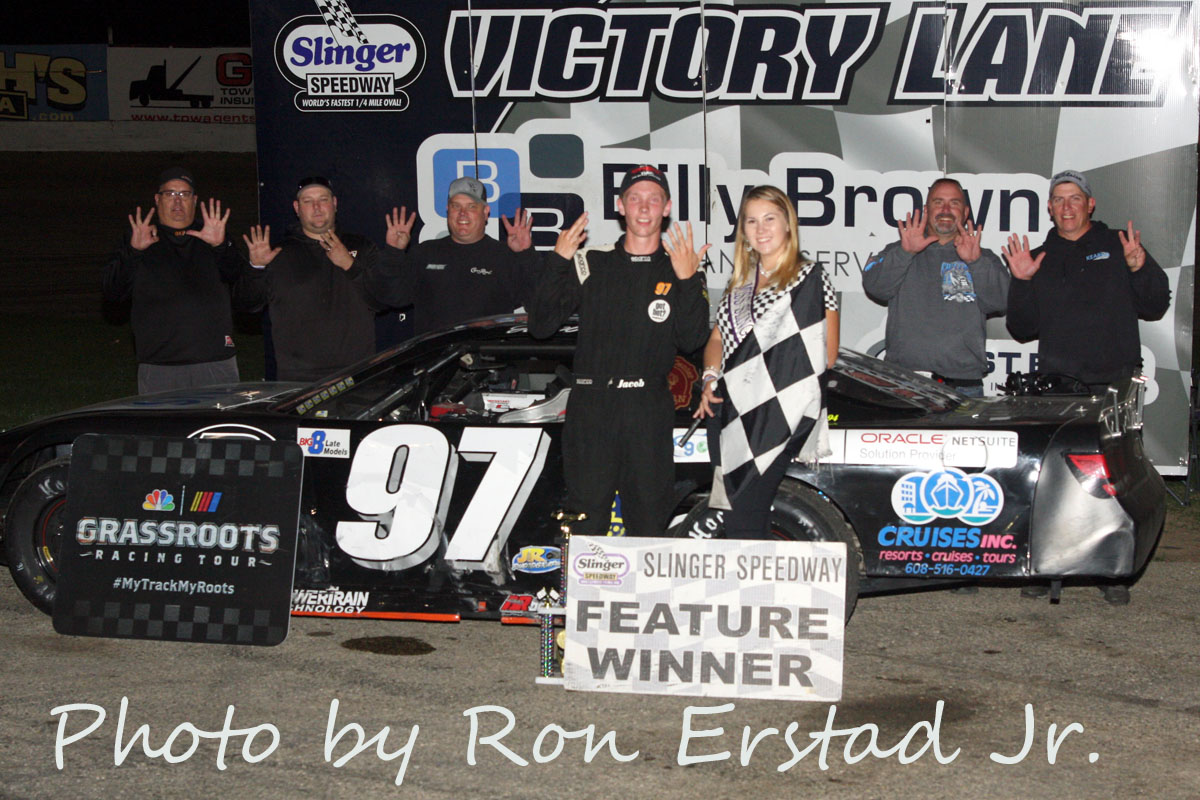 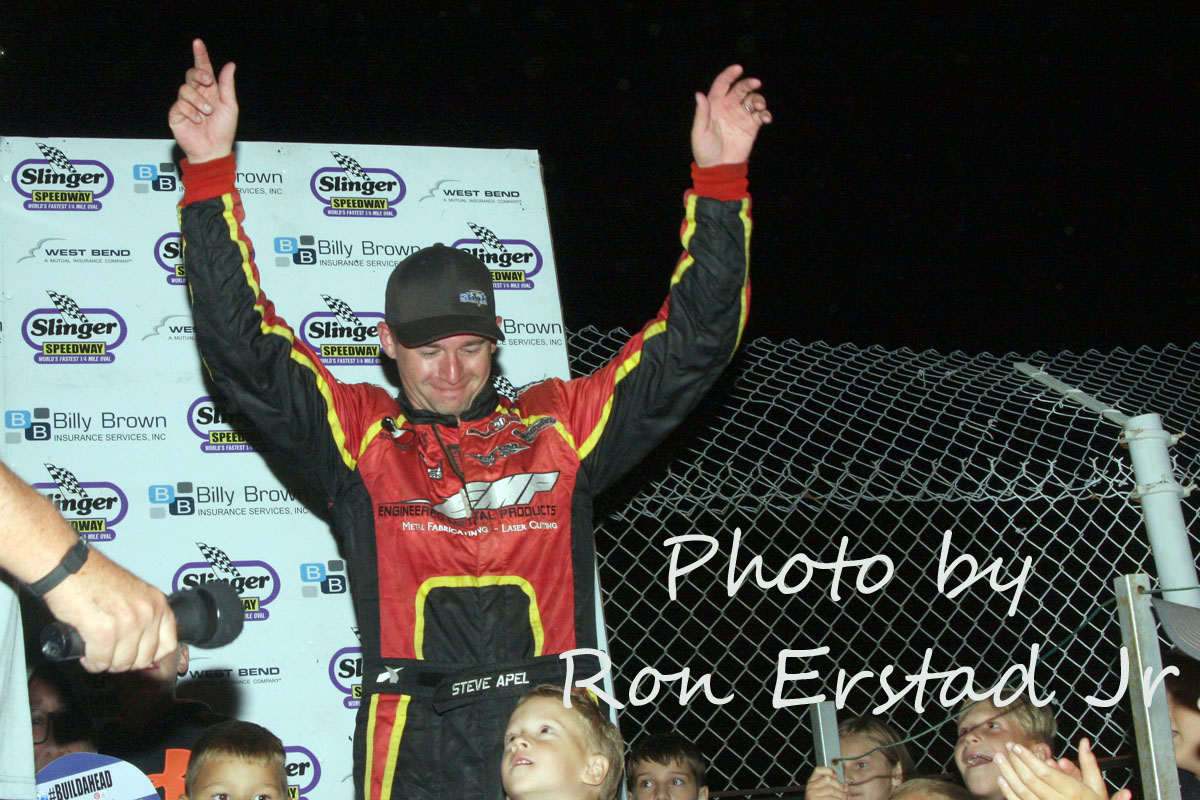 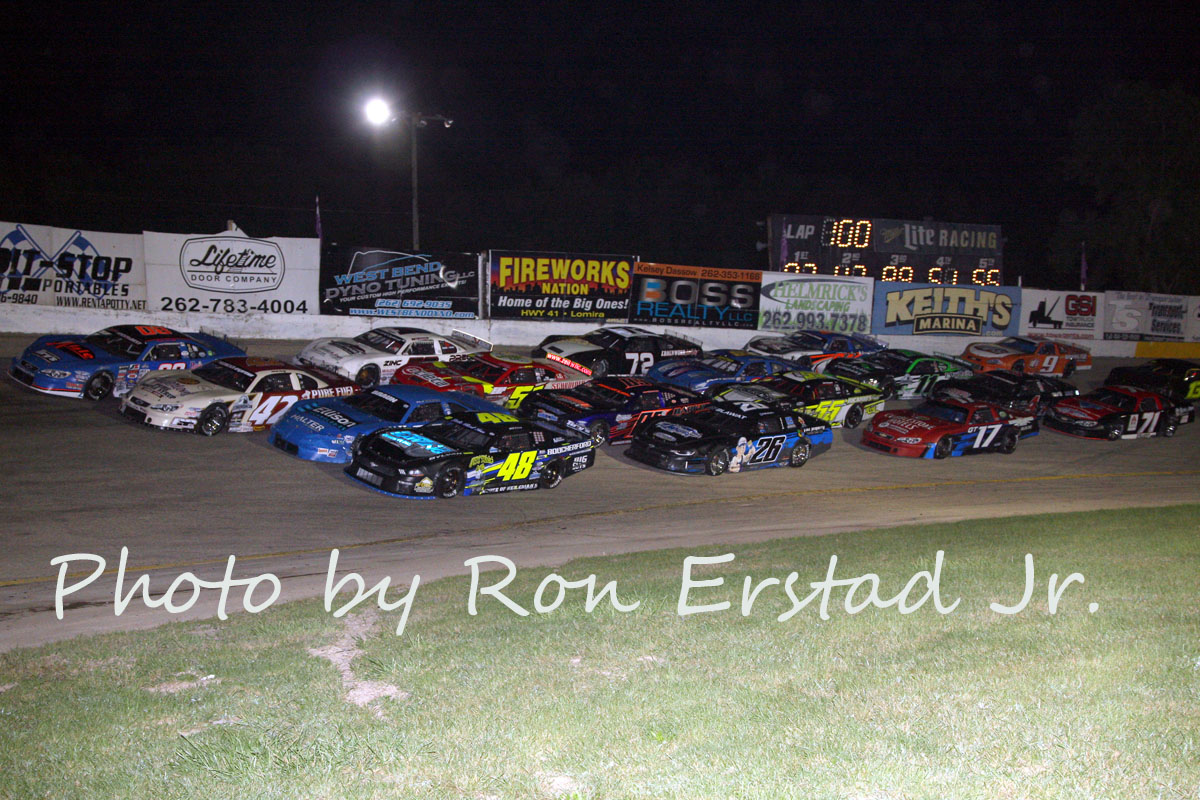 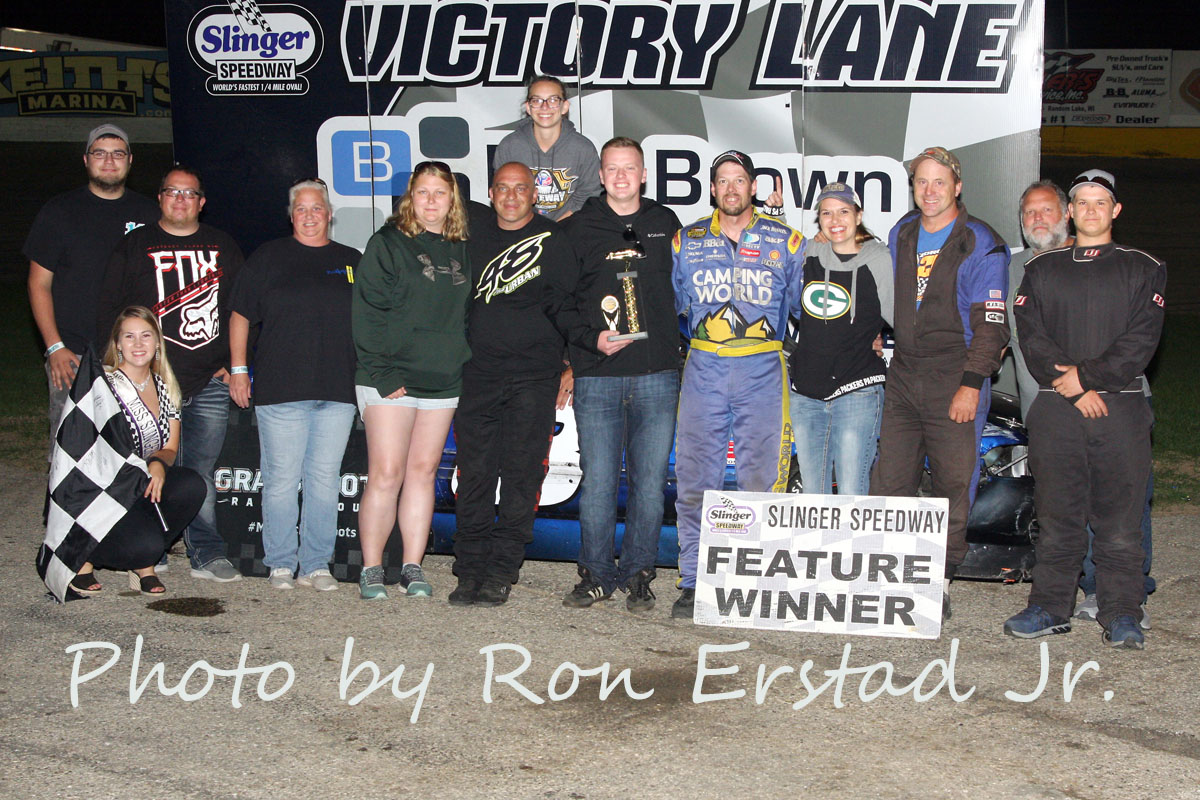 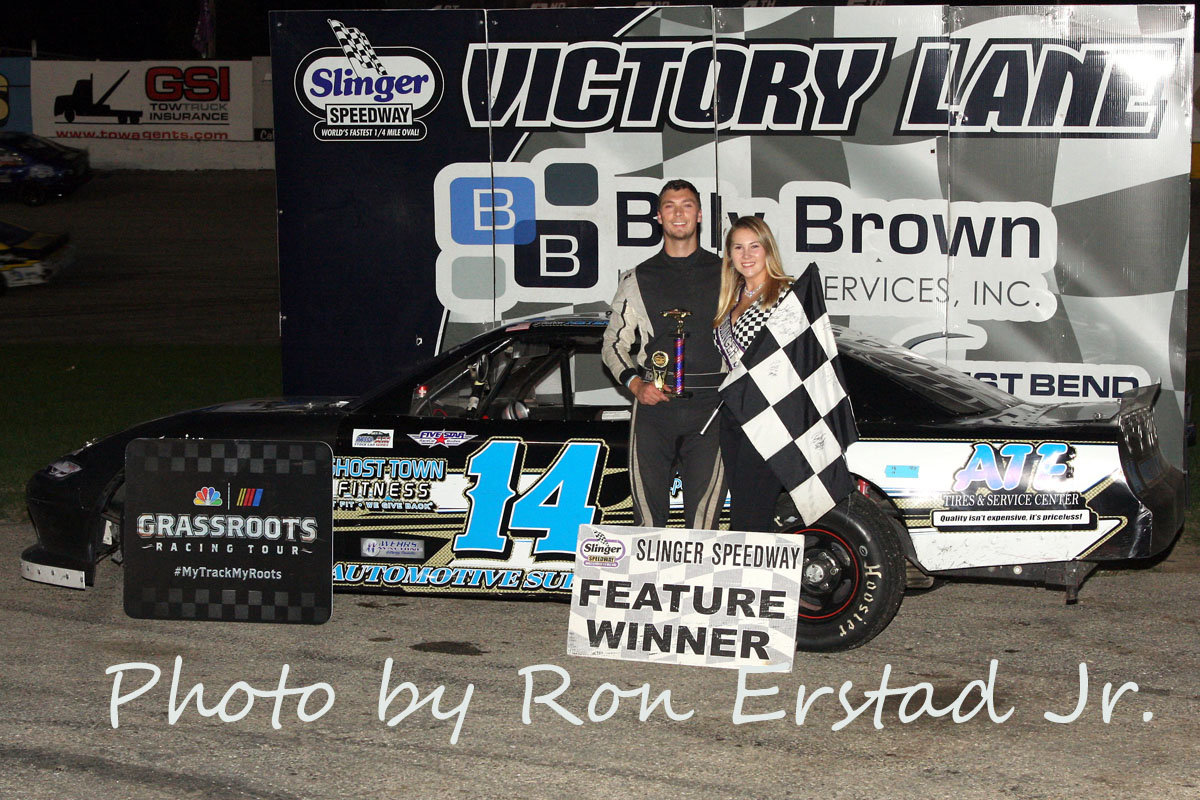 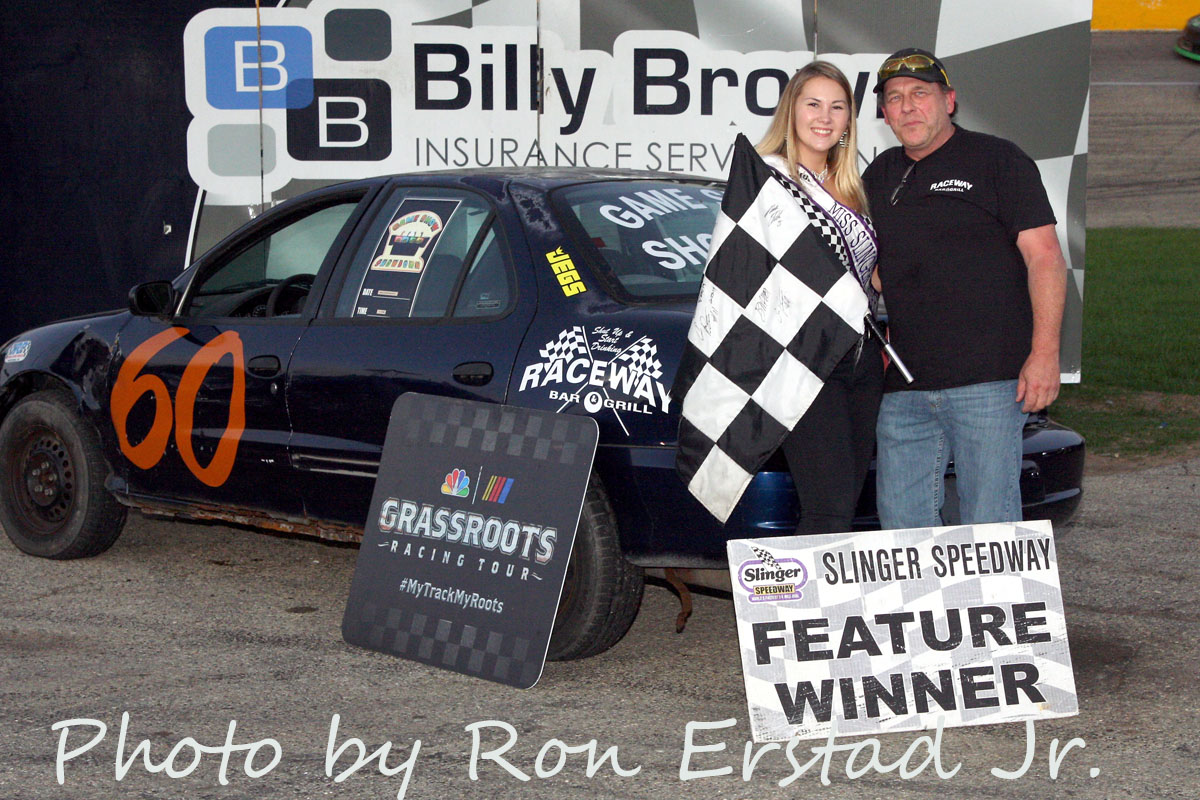 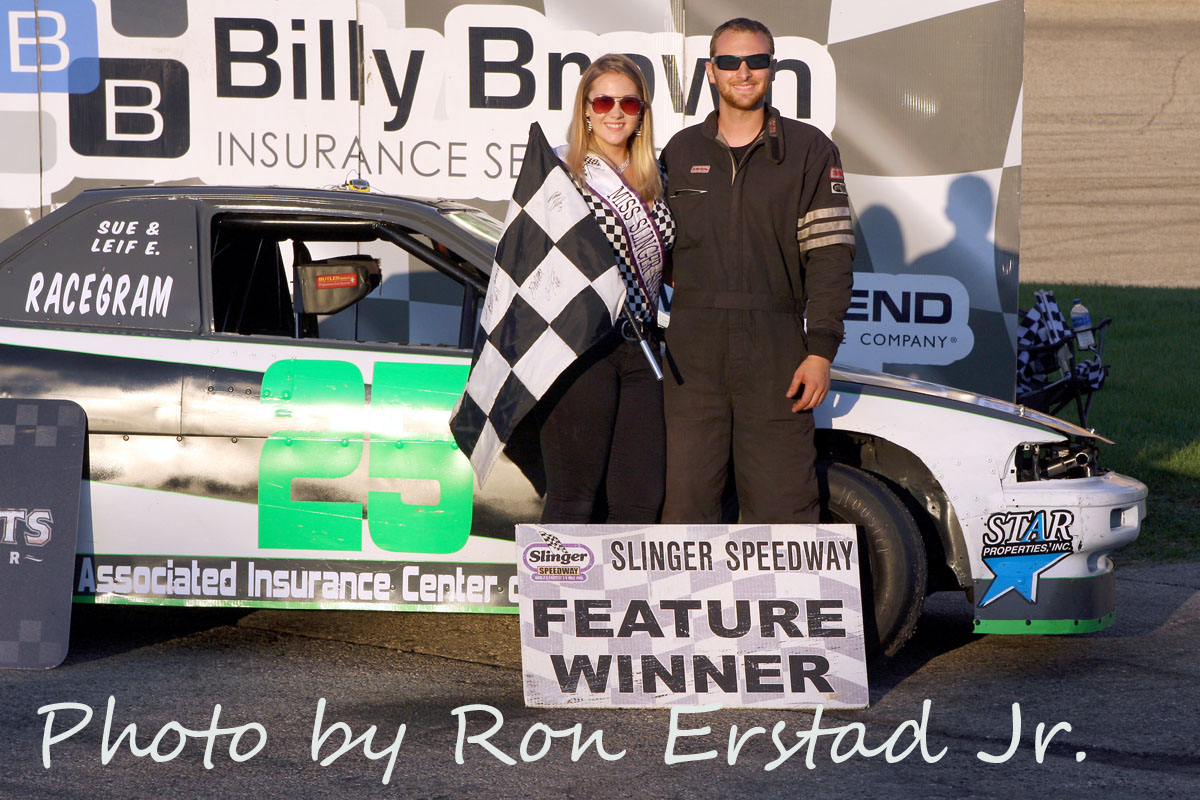 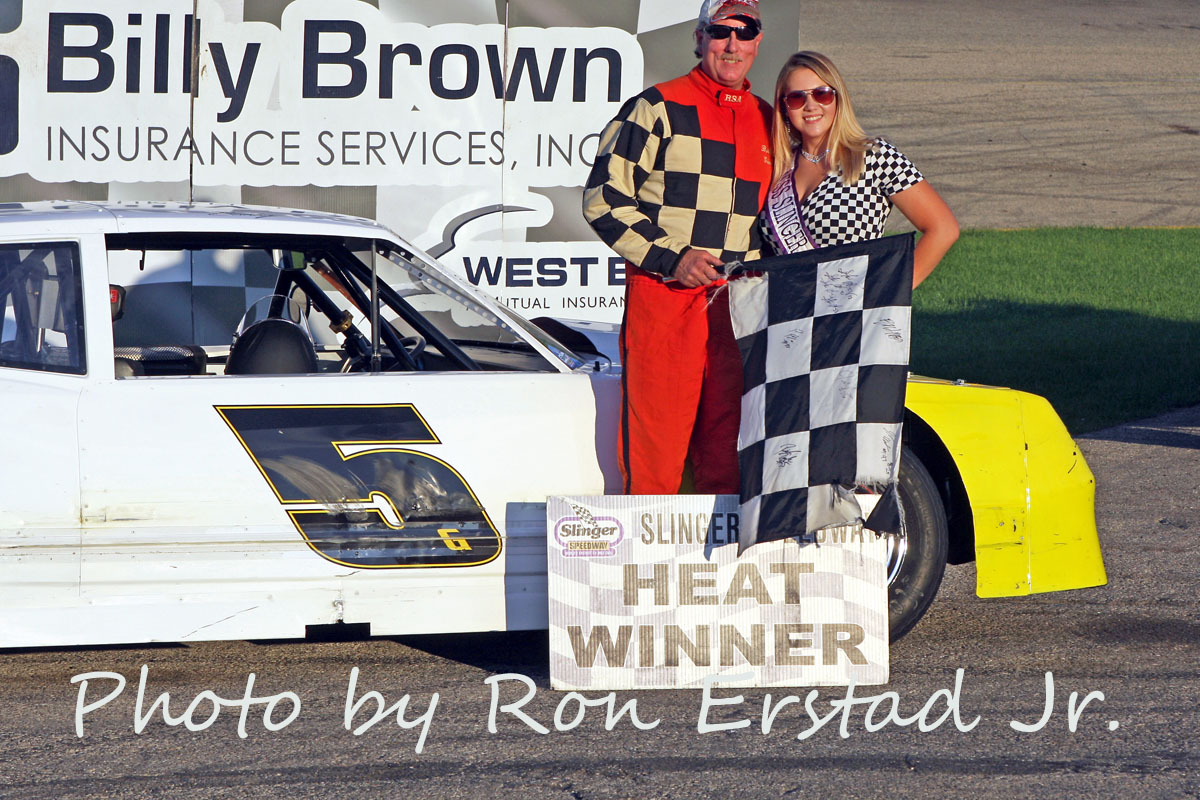 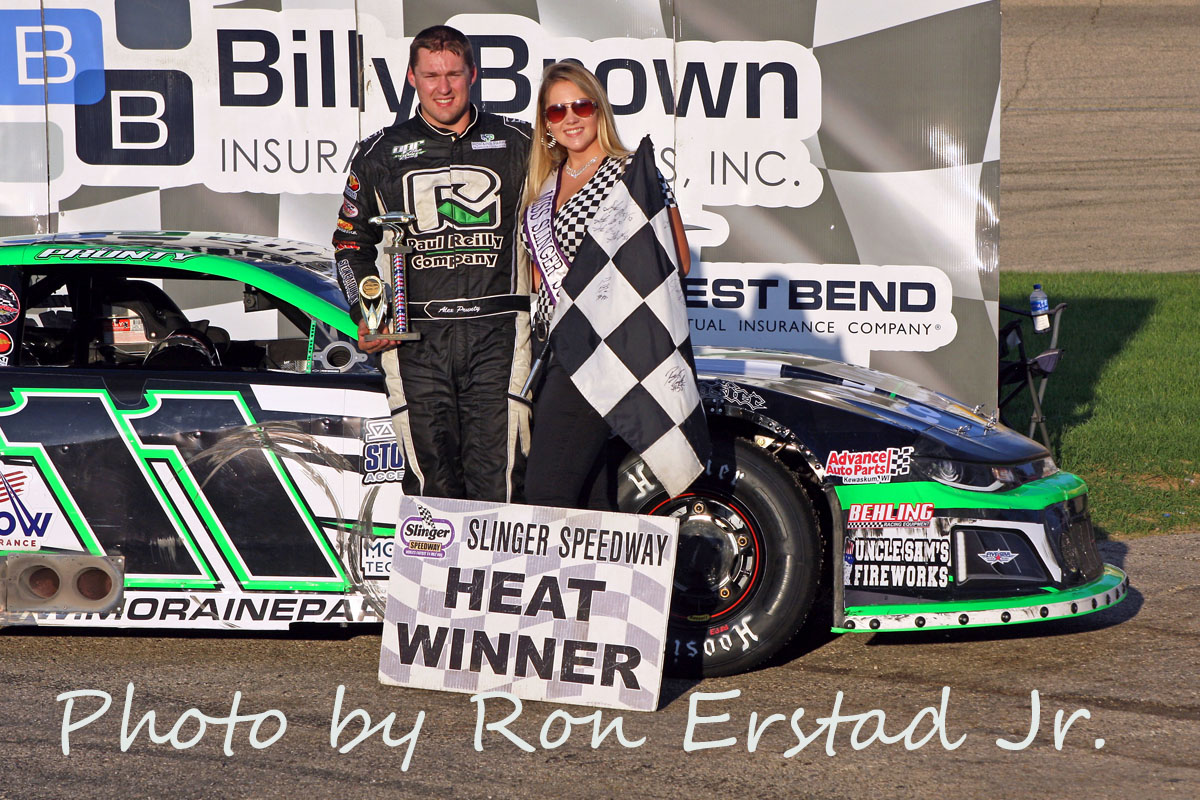 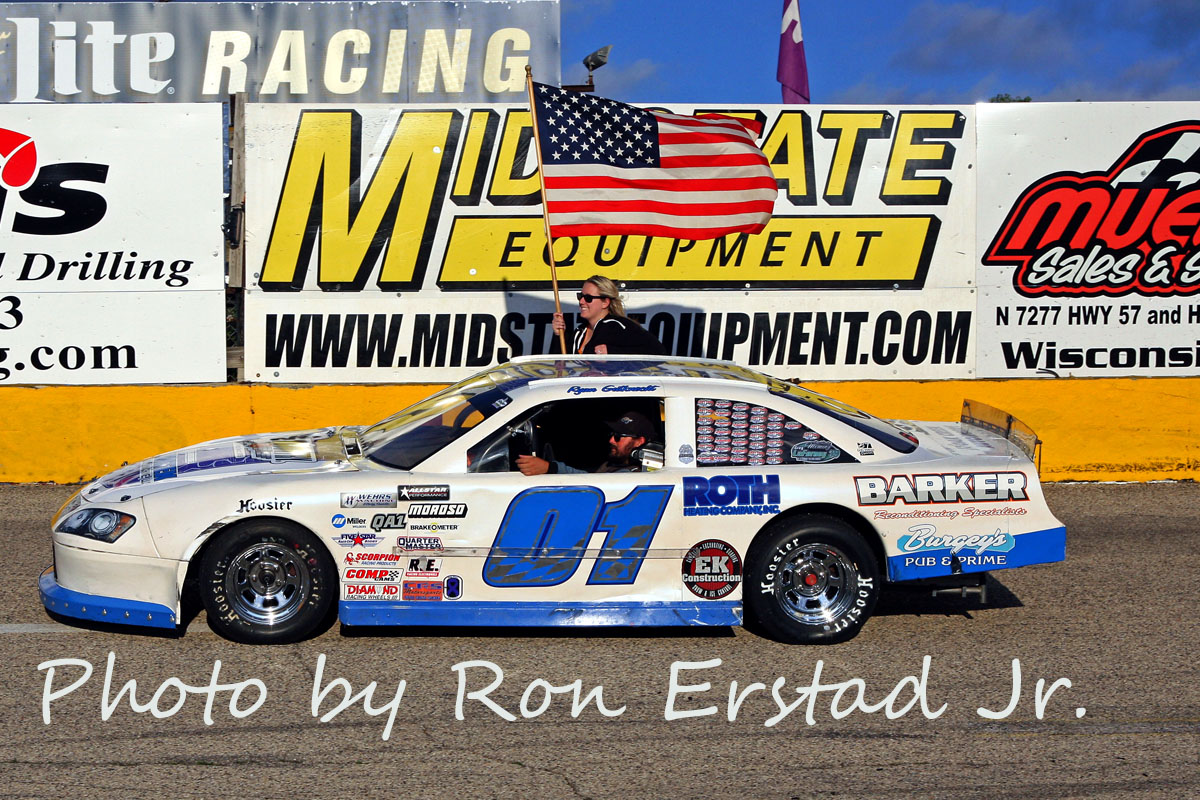