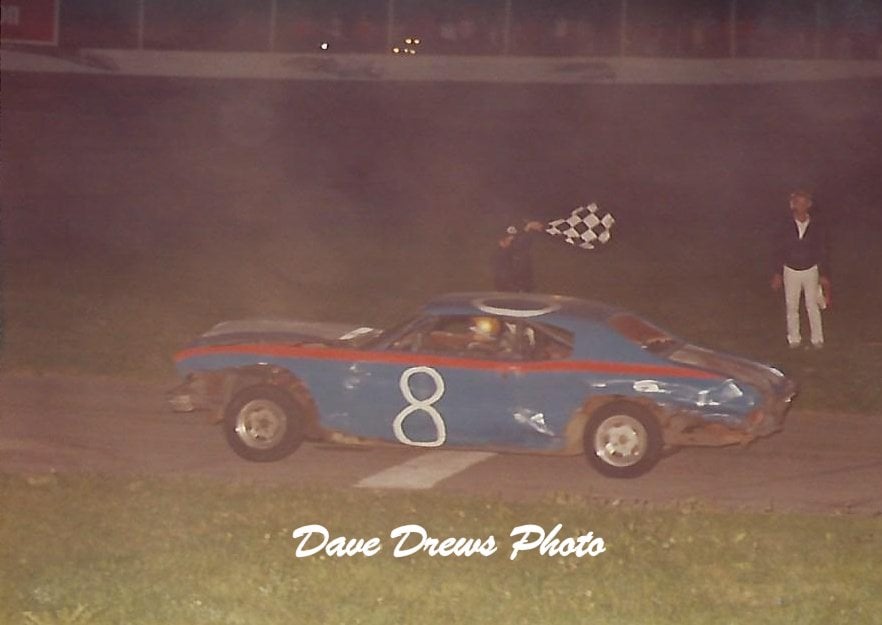 How did you get into racing?
Well, that was quite a few years back…Dad and a friend made a puddle jumper (some people call them jitneys – made out of Model A or Model T parts and pieced together) and were racing through the corn stalks. He put me into the Amateur division at Slinger, and it just went from there. I’ve been racing from the age of 10 – tractors, go-karts, anything… That was my real job when I raced – we ran seven cars every Sunday. There was a little bit of maintenance going on. Well, I had a repair shop and did some repairs too.

What have you been up to since leaving racing?
I did some tractor pulling this summer and took second place out of 150 tractors at Burnett. I raced last year at Track Attack at Jefferson too. That was a trophy deal – more for fun than anything .

Why did you stop racing?
A lot of it was a cost issue, and I had enough championships already. That’s probably the best time to quit – when you are on top. It was mostly a cost thing, though; it was getting pretty costly in the late 80s. I had been racing for 20 years by then.

What do you like about Slinger Super Speedway?
Well, to tell you the honest truth I liked it when it was dirt [laughs]. I was born and raised on the dirt, sliding around my whole life. I could make the car work on dirt. I drove around the circuits – all the tracks. The dirt just worked for me. I talked to Wayne a lot about putting a Figure 8 track in years before he did it. That was my forte. I could slide around like I wanted to. I was always good at making the car slide, I have good peripheral vision, and I knew how to set the car up for the high banks.

What divisions did you race?
The Figure 8s, Amateurs, Hobby Stocks, Late Models…the full gamut. Pretty much all the divisions on a regular Sunday night. Figure 8s were my favorite. I could excel in that because I had a good handle on it. In the other types of racing on the oval, it is a lot of do this, do that, the track changed, the tires changed, the atmosphere changed…We didn’t have that trouble with the Figure 8s. Once the car was set you never had to worry about anything. We could run the tires all season. And it paid better too!

Who do you need to thank from your racing days?
Crew: Scottie Koch, the Dobberpuhls: Russ, John, and Ken
Sponsors: Jerry Mueller’s dad – Mueller Food Service and Fox Welding Supply
Anyone else: Well that was it – those are the ones that really made it work

What was the Kannenberg Connection?
Well that was the five of us – the Dobberpuhl’s, Scottie, and me. That name was something Todd [Behling] came up with because we were there every Sunday for years and years, never missed a week. [Follow-up: I’ve heard about a train of cars coming to the track…] That would be us. I drove a 3-car hauler, then I had two 2-car haulers, then we added on a semi car carrier. They call them portable parking lots. We pulled into the pits with seven or eight cars, so we had a train. When I raced, I had cars waiting in the pits so I could get out of one and into another. I was tired by the end of the night.

What is your favorite racing memory at Slinger?
When I gave Dick Witt a ride. That was pretty good [laughs]. He was in the pits and needed a ride to the flagstand. I made him get in the car and we took a couple laps. His fists were flying, but the crowd was going wild!

How did you get your car number (#8)?
I took it. When the Figure 8s started, I promised Wayne five cars all year, and said my car number was going to be 8. I thought that was good for Figure 8s. I had a great BIG 8 on the roof, that went from the windshield to the back window. It was a black roof with a white 8 on it, so it showed up pretty good.

Which Slinger driver (past or present) do you respect the most?
I always liked Miles Melius. I knew him pretty well, and we seemed to get along and chat a lot. He was pretty good to me.