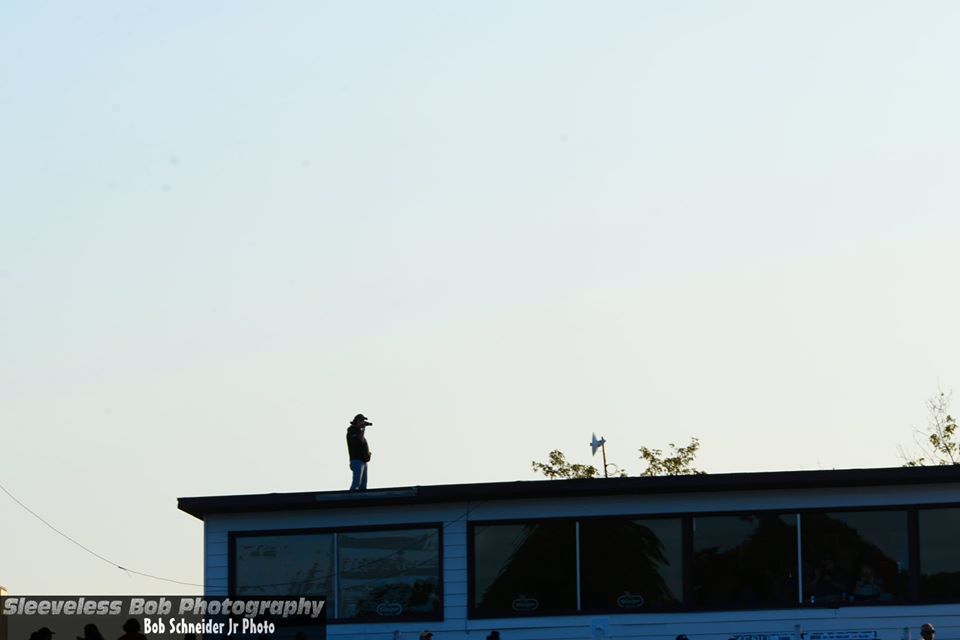 How did you get into racing?
My dad is a big race fan and he and my grandpa took me to the USAC stock car races at the Milwaukee Mile when I was two years old. I think it may have been the practice and qualifying day and I remember the Plymouth Superbirds of Bobby Unser and Roger McCluskey being really fast. After that my dad and I spent a ton of Saturday nights at the Hales Corners Speedway where Al Schill and Mike Melius were the drivers I cheered for the most. My parents knew Dave Tomczak through high school and I got to hang out in his garage once in a while and we watched him race at both Hales Corners and Slinger. (The pics included are…Hales Corners Inspection Day 1973, 3-year-old me by the #0 car, 5-year-old me in Dave Tomczak’s #68 Hales Corners late model, in the pits with #21 Dave Tomczak at Slinger around 1981)

You video the races from atop the concession stand, free-standing on the roof. Any close calls up there?
The only one I can think of occurred several years ago on a fireworks night when suddenly a fireman popped up through the roof opening. He was as surprised to see me as I was to see him. “What are you doing up here…the building is on fire!” he said, which really got my attention. During the fireworks show, someone wasn’t paying attention to the concession grill and the wall caught fire. Everyone inside the suite was evacuated and apparently they all forgot to tell the guy standing on the roof. There were flames shooting out the vent behind the building by the stairs and I had to wait for the firemen to blast them with their extinguishers and then run down the stairs before they flamed up again. The fire was eventually put out without too much damage and I recorded the rest of the night from the top row of the grandstands.

This past summer, you had Tony Eury up on the roof with you….any other famous visitors over the years?
There have been quite a few over the years. I have watched races from the roof with NASCAR Hall of Fame members Bill Elliott, Buddy Baker, Dale Jarrett, Alan Kulwicki, and Rusty Wallace (who told me I like racing way too much). Dick Trickle, Butch Miller, and Ted Musgrave have also been up there and even USAC/Indycar driver Tom Bigelow was up there when the USAC National Midgets raced at Slinger in 2008.

What do you like about Slinger Super Speedway?
The people, from the drivers, crew members, track employees, and the fans who collectively provide a one-of-a-kind experience that can’t be found anywhere else. Slinger is fast and intense and the competition throughout the field is incredible. I have been to several tracks and events throughout the country and nothing comes close to the racing action at Slinger. Every week I find myself thinking “it can’t get any better than this” and then next Sunday rolls around and it usually does.

What is your real job?
I am the Police IT Specialist/Office Manager at the South Milwaukee Police Department. I manage the Records Department handling open records requests and maintain the Records Management and CAD computer systems as well as the squad computers, body cameras, license plate readers, and citation software programs. 2020 will be my 29th year at the department and I worked as a 911 dispatcher on third shift from 1991-2004 (many times I went from Slinger straight to work) before moving into the Monday-Friday Records/IT position. I kept up my 911 certification and still work some dispatch shifts in emergency situations.

Two non-racing Slinger memories really stick out for me as well. The first was also in 2005 when the Nationals got rained out on Tuesday and ran on Wednesday night. I got to the track way early and when I went in the office, Dick Trickle was in there. He invited me to sit down seeing as I was there so early. We talked about everything for like 45 minutes from racing in North Carolina to Wisconsin racing and he knew who I was and what I did. I walked out of that office and literally made one of those “OMG” faces and couldn’t believe just how cool that was.

The other was in 2017 (July 9th to be exact) and I had my worst night ever in assisting with track calls, totally missing two of them and costing drivers valuable positions on the track. Also that night a coworker from the police department brought their family and friends to the track for the first time and even though I wanted to get out of there as quick as I could, I felt obligated to walk the pits with them afterwards. They had a great time and their kids were really excited to meet the drivers and get autographs. The parents were pretty impressed with the track as well and said they would definitely come back. It was a real life lesson on how in the big picture you should never let your worst night at the track ruin someone’s best night and I have thought back to that night since when things at the track haven’t exactly gone as planned.

Have you ever raced?
I raced in a “celebrity” type media race at Hales Corners Speedway back in 1990 and 1991 when I worked at the WAUK radio station. In 1990 I drove Mark Flasch’s #8 Pontiac and made it to the second turn before I spun out. In 1991, I was determined to have a better showing. There were eight of us in the race and drivers in the Hales Whales (basically street stock) division let us drive their cars. I drove Roger Lee’s #288 City Veteran Oldsmobile Taxi and I think they lined us up on an invert by perceived ability which put me on the pole alongside the other guy from our station who for some reason refused to acknowledge me when I waved to him as we lined up for the start. I was determined to at least lead the first lap which I did but then got way loose off turn two (again Turn Two!) on the second lap and spun wildly down the backstretch as Jim Tretow and John Baas rocketed by into the lead. I was 21 and had a pretty large group of drinking buddies in the stands to watch, including some pretty good-looking girls who hung out with us. I was so mad that I had just blown my one big chance to get noticed that I mashed the gas as the car spun around which kicked up a huge cloud of dust. It looked pretty spectacular from the stands as the “Taxi” light on top of my car came through the dust and I was able to keep going, although I had to limp around on a bent wheel to the finish. I finished 7th out of eight drivers, and the one driver I beat was the other guy from our station, at least I thought. It turned out he never showed up and they substituted the track trophy queen in his place, which is who I finished ahead of. It also explained why I didn’t get an acknowledgement when I waved over at the start as she was probably wondering who the idiot waving in the car next to her was. There is a video of the race on YouTube and it can be found here…https://youtu.be/e9OgEdTQLgE

If you could have dinner with any three people (alive or dead), who would they be?
Fireball Roberts, Chuck Yeager, and Enzo Ferrari. Fireball Roberts because I’ve always been intrigued by him just from reading about his history. He was the first NASCAR superstar and continued to win even as NASCAR transitioned from the beach and dirt races to the superspeedways. I’d like to hear first-hand stories on racing on the beach. Chuck Yeager because talking to someone who was a flying ace in the war and then served as a test pilot for experimental rocket powered aircraft to be the first guy to break the sound barrier just has to be an interesting conversation. Enzo Ferrari because he founded what is probably the most recognized racing team in the world and pretty much poured everything he had into his cars, which totally went against the perception that he was just some super-rich dude. I’m a big believer that determination is a huge part of being successful, and I’d like to think he would be able to provide some advice on how to stay determined especially when things aren’t going your way.

Among those who know you, you are famous for attending many races each year. How did that get started? What did this year’s schedule look like?
For me, the racetrack was always the one place I could go where for some reason I just seemed to “fit in”. It’s the place I can go to escape life for awhile and be myself and not feel like an awkward guest. As a kid I was painfully shy, so much so that one of my early teachers told my parents I wouldn’t amount to anything because of it, and being accepted so easily at the racetrack went a long way toward developing the confidence to do other things in life such as the radio shows. Like the old Cheers TV show theme said, you want to go “where everybody knows your name and they’re always glad you came,” which to me was the racetrack and each time I went, I met more people who suggested other tracks and events and it just kind of snowballed from there. I’ve never been one to just sit around as well and many times I go to races because I have nothing else to do and I don’t want to just sit around. This year’s schedule came to about 80 races including NASCAR races at Daytona, Las Vegas (twice), Joliet, Indianapolis, and Homestead along with asphalt super late models, late models, modifieds, WOO dirt late models, WOO and IRA sprint cars, USAC Midgets, Indycar, and IMSA sports cars. Contrary to what a lot of people think, I don’t “have” to go to all the races I go to and definitely would cut back on them if I had other obligations.

Which Slinger driver (past or present) do you respect the most?
I would say Conrad Morgan as I think it’s incredible that not only has he raced as long as he has but he has continued to win and is as competitive as ever. Coming back from his serious back injury a few years ago and then actually winning the super late model feature is an amazing story that would probably make a good movie if someone took the time to make it.