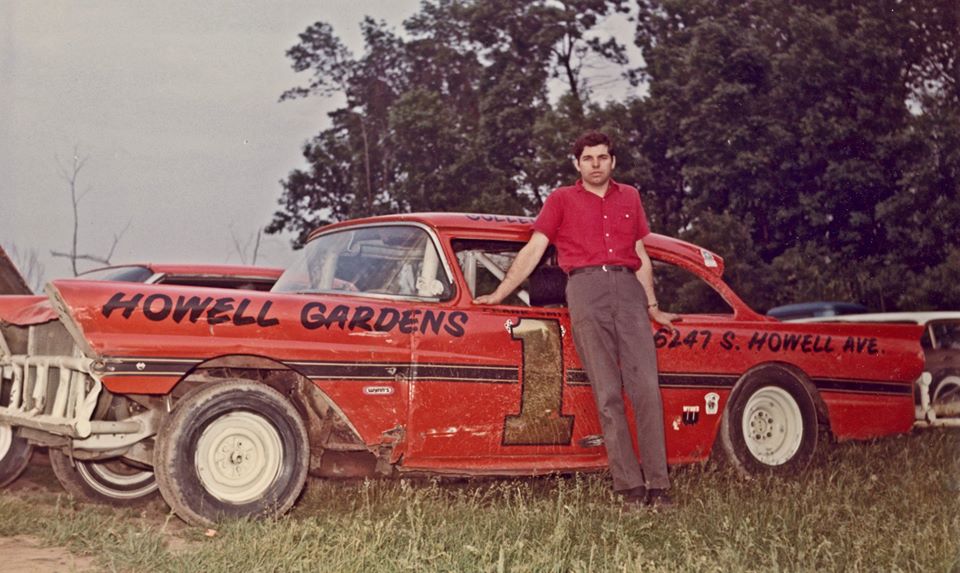 How did you get into racing?
Oh boy. Well my buddy talked me into it – that’s how it happened. He had a friend with a car way up north, and he decided it should have to happen. We had to drive all the way up there to get it – it was the other end of the world…past Eau Claire. It was pouring rain the whole way, but we were young so it didn’t matter.

Do you remember your first race?
No, but I remember my first win. It was at Hales Corners. There was an accident and I got rolled over on the roof. They put me back on my wheels, and the front wheel was bent. They didn’t want to let me run, but the crowd was saying let him run. So they did, and I won the race.

What do you like about Slinger Super Speedway?
Well, it’s pretty fast for one thing – stuff happens in a hurry. It’s a pretty nice track. I’ve been going there for a lot of years.

They called you “Frank the Farmer” – why?
(laughs) Well, that’s what I was. I was raised on a farm in Lena.

What was your real job when you were racing?
I worked at American Motors for 30 years, putting cars together on the assembly line.

What is your favorite racing memory at Slinger?
Back in the day I won eight championships in a row [1962-1971] running Sportsman. That’s a pretty good memory.

You mentioned your first car number being 112. Why did you choose that number?
That’s how many cars there were! It was the only number I could get because there were so many cars. Back then we just got them out of the junkyard, so they were free or cheap. That’s why there were so many.

If you could have dinner with any three people (alive or passed), who would they be?
Well, that’s pretty tough. The Mouse would be one for sure; we got along really well. Could I put Brad Mueller in there too? There are so many guys, this is really tough….Dick Duston – he was always a good guy, and he’s still around.

What was your first street car?
I think that was a gray 1949 Olds. [What happened to it?] It had a bad motor so I traded it off and got a ‘56 Ford, which was a really super strong car. I beat the living daylights out of it!

Which Slinger driver (past or present) do you respect the most?
Brad Mueller – I know him and he’s a pretty clean driver. I like clean racing. I’ve been watching him on the dirt and the asphalt and have known him for a long time.

Catch up with Frank and other “Living Legends” at the Southeastern Wisconsin Short Track Hall of Fame on Saturday, February 29th from 10am to 2pm.