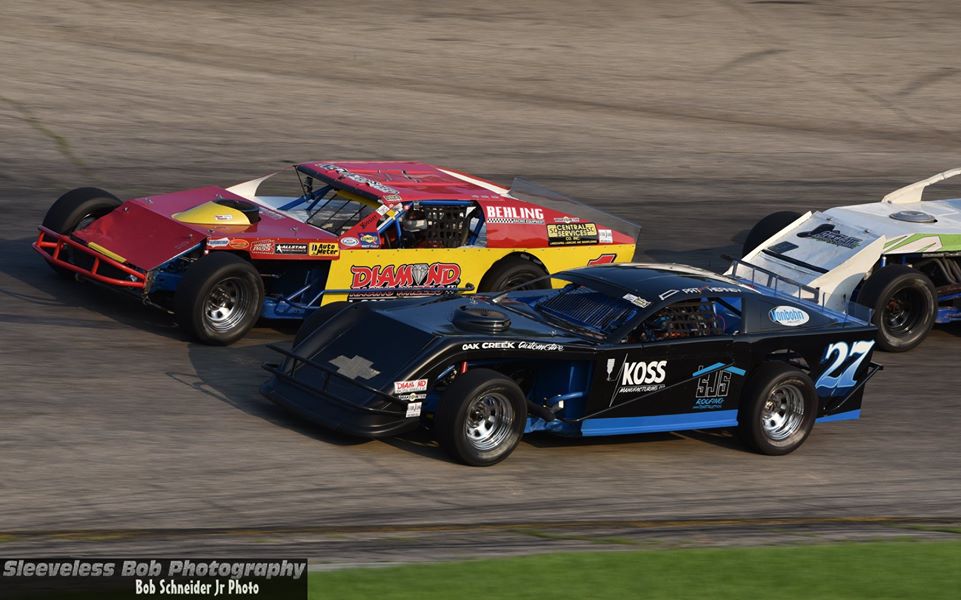 Describe the division, please.
Never thought I would get the chance to really be competitive in this class, but the rules as they are make it easy for a variety of chassis and engine combinations to be competitive. The whole idea is to make it affordable and enjoyable. As the rules are written, it is a keep it simple concept. Most of the competitors in this division have a lot of experience and want to enjoy racing without breaking the bank These cars are not allowed high-dollar trick parts.. Not having to race every week is also a nice concept so you can plan a few other things during the summer. I think one of the best things about the Modified division is the fact that they do not look like any other pavement race car. I believe this helps attract fans to watch them. I think it is a great way to enjoy competitive racing at a reasonable cost. ~Bill Prietzel, Driver of the #11 Modified

How much will it cost to get involved?
Getting started in a modified is quite easy and it is probably as inexpensive as any entry division. There are plenty of used cars around in the $2,000 to $5,000 range that were raced on either dirt or pavement. Converting a dirt car to race at Slinger is not difficult. Finding a good Sport Mod is a great place to start. These cars already have a 3-link suspension which is one of the rules for the class. You can also run a leaf spring car. The 602 crate engine is very popular but it isn’t your only engine option. A new 602 crate engine is about $4,500 with the 650 CFM 4 bbl carb and water and fuel pump. The rules allow for either a 602 crate engine or you can run an open engine which would be anything other than a crate engine but with a 500 CFM 2 bbl carb. There is a 150 pound weight advantage by running the 602 crate engine. The 602 engine has a 2,500 pound weight rule versus the 2,650 pound weight rule for the open engine modified. Both engine and weight combinations are competitive. ~Bill Tandetzke, Driver of the #1 Modified

When will the Slinger mods race in 2019?
Once a month, May through September. This will be a points-based division, with a championship!

How many crew members does a Mod need?
One to two crew guys can work well for the modifieds, but more can be better. ~Steve Schulz, Slinger Modified Champion-2007, 2008

Why bring back the mods?
(1)Low cost racing. (2) Something different for the fans to see at the track. (3) Current Modified Division racers are asking to compete at Slinger Speedway. (4) The fans are asking for the mods to return. ~Todd Thelen, Owner/Promoter, Slinger Super Speedway

You’ve run several divisions at Slinger, why are the mods your favorite?
I decided to build a modified because they are unique. You can run pretty much any body style you want and can make your own body panels easily at a low cost. They are easy to work on with the open wheels and you don’t have to replace fenders. We can run a quick change or 9” rear end. You can be just as competitive with a 602 crate motor as a big open motor. Mods run very similar lap times to a late model at a reasonable cost. ~Justin Okruhlica, Driver of the #54 Modified, Slinger Modified Champion-2009

What is the secret to winning a championship in the mods?
The first championship I lost because I turned down a motor claim…. After that I read the rule book extremely close and spent hours in the garage working on my car. I wouldn’t leave the shop until everything was perfect. Races and championships are won in the shop not chasing your tail at the track. ~Dale Prunty, Slinger Modified Champion-2003, 2004, 2005, 2006

How would someone find sponsors for their car, to help with the costs of racing?
Getting money to help is really similar to any other division. Ask around as much as you can, you never know. You definitely get a lot more no’s than yes’s. Also try to make it beneficial for the sponsor as well. Maybe offer to hand out coupons or something with a little money from each one that comes back coming to you or things like that. It really depends. ~Steve Schulz, Slinger Modified Champion-2007, 2008

Who can be contacted for more information?
Lynn Wagner, Slinger PR/Marketing Coordinator at lynn@slingersuperspeedway