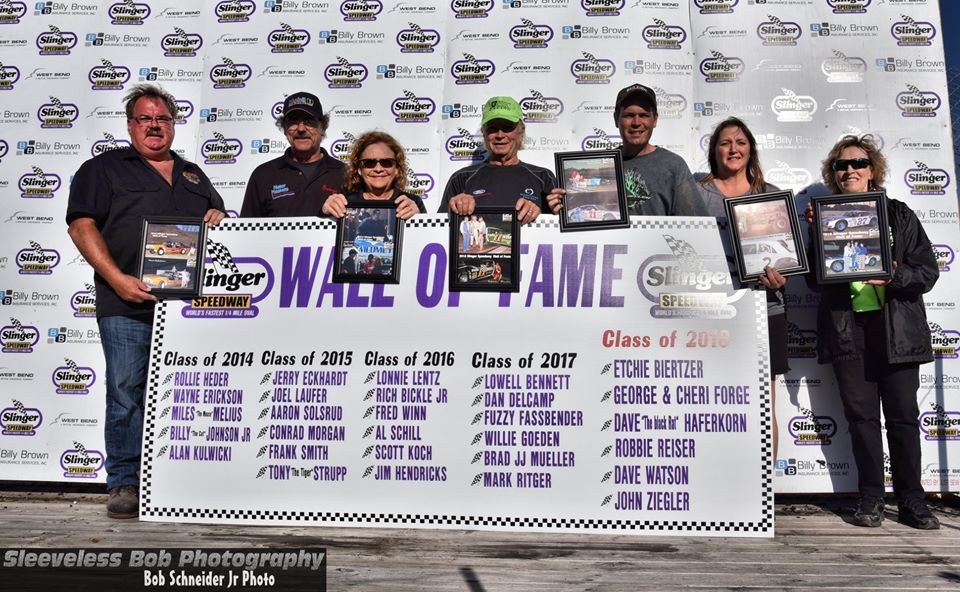 How did you get into racing?
In probably 1978 I started going to Hales Corners. I helped pit crew for Rick Anderson, Mike Cayton, and Mike Egan. Then I started racing in a Spectator car at Slinger, probably in 1980. I did that for a couple of years and then I built my first Figure 8 car in 1982. [Why Figure 8?] Because they actually paid the most money for the investment you had.

How did you get the name “Black Rat:?
Well, we were sitting at a shop I rented and my car, the Spectator Eliminator, had a different colored hood, fender and door and it just was ugly and obnoxious. So, I decided to paint it all black one night when my buddies and I were sitting around. The next weekend we were sitting around hanging out and we decided to name it. We came up with the nickname Black Rat for the car and eventually it turned into my nickname.

A recent compilation of feature wins at Slinger, shows that you have at least 37 – do any of them stand out?
Of course the first one, and I know I won a couple of Pat Schauer Memorial races. I always liked those. There was a season special at the end of the year where they invited all the drivers from the other Figure 8 tracks in the area. I won that one year; that was pretty cool!

What do you like about Slinger Super Speedway?
I guess its uniqueness in how fast it is and the high banks. People don’t appreciate those high banks until they go across the track and walk up one of them.

Who do you need to thank from your racing days?
Crew: My dad-Dave, Sr. and my brother Dale – they were there through all of it. Dave Teske. John Spinney – he was my motor guy. I did 90% of the work myself; I believed if I couldn’t do the work myself, I wasn’t going to do it. Sponsors: my very first sponsor I ever had was Otto Ambulance – a tow truck company that was at Slinger and towed wrecked cars every week. The Brake Shop – he gave me used tires from his auto repair shop and let me use his tire machines. Then I had Butler Metal Spinning, where I served my apprenticeship. He let me build the cars there and work on them – the first ones. Schneider Grinding was one of them in the beginning. Then I guess I got my brother when he started TriTech Heating – he was a sponsor. My cousin owned Action Quick Print and he sponsored me. Hometown Appliance in Hartford sponsored me. Hitching Post – it was a trailer hitch installer in Milwaukee sponsored me. Volkman Railroad Builders was a big sponsor of mine. They gave me a shop for probably ten years to work out of.
Anyone else: All the fans mostly and a lot of the competitors I got to be good friends with. And all of the other friends I made through the years. That’s one thing I liked the most was the people that came back in the pits after the races and you’d laugh and giggle and tell stories. Finally, my wife, Susie, for putting up with all my nonsense and missing different family functions.

What is your favorite racing memory at Slinger?
There are a lot of them, but one that sticks out in my head is Joe Destefano, Sr. He and I graduated together and we’ve been friends ever since probably 1977. His son, Ryan, was…I’m going to say two or three years old and they came in the pits after the races one night. Ryan had taken crayons, drawn me a picture of my racecar, and gave it to me. I still have that picture downstairs in my memorabilia. When he got to be older…I don’t know 10-12 years old…they’d still come out to the races. He wanted his bedroom painted with one wall a checkerboard and they had me come out there and sign his wall with “Dave Haferkorn The Black Rat”. I’ve actually gotten letters from fans and young kids that I gave trophies and t-shirts to!

What was your first street car?
My very first car was a 1969 Camaro that was a rust bucket. My dad and I rebuilt it and had it all ready for when I turned 16 years old. I sold it after about 10 years to buy a ‘70 Camaro that I did my first frame-off restoration on.

Which Slinger driver (past or present) do you respect the most?
I was always a big Conrad Morgan fan back in the day…Al Schill and Brad JJ Mueller too. But as far as Figure 8 drivers go, I’d have to say Officer Steve Schuldt and Mike Newlin. A lot of people thought that Officer Steve and I didn’t get along, but to this day we are still best friends. I actually built the last Figure 8 car he had. There’s kind of a funny story because I had the Black Rat, and Officer Steve had a sheriff’s badge…and on the inside it said Rat Patrol. Then on the back of my truck I had, “Have you dialed 911 lately” (that was the number on Steve’s car). We’d go back and forth like that all the time, just pranking each other. The fans bought into that all the time that we didn’t like each other. But in fact, we were really good friends and pitted next to each other. One night he won the race and after the races we were in the pits and he had his trophy on top of the car. I stole his trophy and put it in my truck. He was wild! He thought someone stole it. We loaded up and went home. I painted the trophy black, snuck in his office, and put it on his desk. He got me back, though. That year…1997 maybe…it was the last night of racing and it wasn’t too stressful because I think I had to finish better than eighth to lock up the championship. We were getting ready to go out and his wife came up to my truck. She was carrying a box, but I didn’t think anything of it. She said, “Good luck,” and at the last second she dumped in my truck three live rats. You talk about mind over matter! I could feel them crawling up me and jumping up from my lap to my arms during the race. I came off the track and my dad said he thought I lost something during the race because something went flying out the window. I told him it was probably a rat. He didn’t believe me so I told him to look in the truck – two were still running around inside there. [You also mentioned Mike Newlin…] He was very, very competitive. Mike and I would fight tooth and nail. He was probably the fastest guy and the hardest guy to get around.