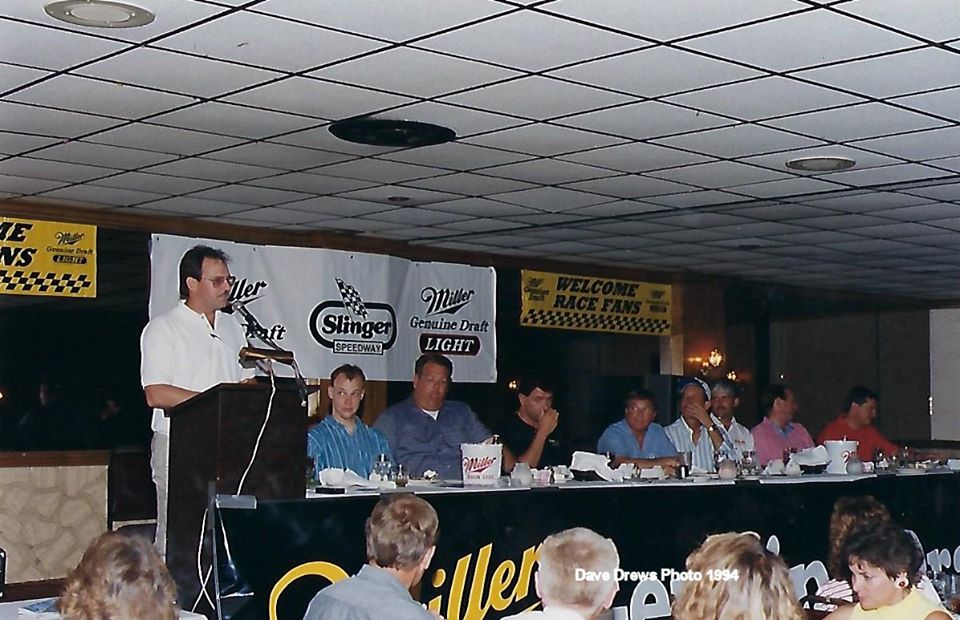 How did you get into racing?
I was a fan first. In fact, I grew up ½ mile from Slinger Speedway, born and raised in Slinger. I started going to the racetrack when it was still dirt with a neighbor who was a classmate of mine. His dad, Norman Saegert, worked at the track as a pit steward. I became a fan – and very much a fan not just of slinger, but of racing in general. In 1988, Seagert, Dick Melius, and my sister Rosie all worked together at Tecumseh in Grafton and car pooled. On the way to work one Monday morning they were commenting about how the PR guy quit. They asked if I could do it and laughed. They told Wayne Erickson and he called and asked if I wanted to come in for an interview. The short story is I was hired because I knew how to use a fax machine.

What do you like about Slinger Super Speedway?
From the fan perspective: It’s probably the most entertaining racing in the country. In all divisions. The ability for those cars to run side by side, lap after lap. It’s the speed and entertainment value the racers are able to provide to fans. From the business perspective: It’s close to Milwaukee, which gives us (sales) a pretty big customer base from which to tap into, and a large media base to tap into. Lots of racetracks don’t really have that luxury.

You witnessed the transformation from dirt to asphalt. What do you remember about that?
I remember some days watching it from the top of the ski hill, looking down at it. But one day I remember actually being at the track when they were starting to pave it. They had already graded it and the pavers went out and made a couple of passes. Behind them they had the big rollers to pack the asphalt down. They had cranes attached to them to keep them from tipping over.

Did you ever race?
I never raced. I did drive a Legend or Bandolero a number of times, including a few laps at Slinger. I took my passenger car out there quite a bit, though.

I read about something you did one night on the front stretch…
I did a lot of stuff on the front stretch with Todd Behling, but you are probably talking about the marriage proposal. Somehow I kept it a secret and we were doing a promo for one of our sponsors, Country Time Lemonade. We had remote control cars to give away to lucky fans. Todd and I got down there with these cars and were getting ready to call the lucky numbers. I asked him if we could call Kay down there to help…and I proposed in front of however darn many people were there that night. She swore at me, right over the PA system, and then she said yes. It seemed to work – we just celebrated our 25th anniversary. I did have to fill Behling in on it that night; I couldn’t pull it off without him being on board and I was nervous as well. Todd would later become best man at our wedding.

Slinger hosts an Alan Kulwicki Memorial Race every year. Were you around during his time at the track?
As a fan I was. He raced there and won a championship right after they paved it. My memory of Kulwicki is I was at the track on a night when he rolled over and slid down the whole front straightaway on his lid. He was the first Cup champion from Wisconsin, which is a huge honor – just him and Matt. There are many states who can’t claim a Cup championship. Not only was he a Cup champion, but he was a Slinger champion. Beyond that, just the way Kulwicki made it, and where he made it. As an independent, and an educated engineer graduate of UWM. I think he represents Southeastern WI and Slinger Speedway in a way nobody else does. Because of that he should be remembered.

What have you been up to since leaving the track?
Wayne bought Madison while I was at Slinger and for 2-3 years we (Kay and I) did sales/marketing/PR at both tracks. She helped a lot because a lot of sponsorships brought people out, so we had hospitality – that’s how the Pavilion in turns 1/2 got built. One of the races we brought into Madison was the ASA series. The owners of ASA liked what they saw at Madison and offered Kay and I jobs to move down to Indiana in 1995. We moved and worked for ASA from 1995 through 2004. She was the Member Services Manager and I was VP of Sales & Marketing. In May of ‘04 I was hired as VP of Marketing and Communications for ARCA. In 2012, I was promoted to VP of Business Development and Corporate Partnerships for ARCA, and that is what I am doing today.

What is your favorite memory at Slinger?
It’s going to be hard to pinpoint just one…. Bobby Allison won a “NASCAR vs Local Stars” 20-lap race on the preliminary night of Nationals. I thought it was cool as heck when he won that race! Allison was hurt at Pocono a few weeks later, which really made it stick in my mind. I have the Victory Lane picture framed in my basement to this day. I got to meet a lot of those visiting NASCAR guys and get to know them. That was a lot of fun; those were great memories. Beyond that, just the people, all the people – racers, fans, sponsors. It seemed like a huge family of people who cared about each other, watched over each other, had common interests and looked out for each other

When will we see you at the high banks again?
As soon as I can. No matter where I go people tell me how lucky I was to have been able to grow up and be at Slinger Speedway as much as I have. Bob Dilner and Buddy Baker came to Madison once for an ASA race. Dilner told Baker that Kay and I used to work at Slinger and he said, “We’ve got to go!”. I said, “Sure, sometime.” But he said, “Tonight, after this ASA race”. So we hopped in two cars and drove way over the speed limit to get to Slinger. We didn’t tell anyone we were coming and after we went through the ticket gate, Baker walked straight to the frontstretch and through the gate onto the track. “Oh. My. God.” he said, “I have never seen anything like this in my life. I heard about it, but never believed it until now.”

Which Slinger driver (past or present) do you respect the most?
Dick Trickle was a huge draw and a huge fan favorite. He used to come and do whatever it takes to put on the show. I saw him change a motor in like an hour and 20 minutes at Nationals one year. He could have just said it “blowed up”, been done for the night, and went to Willie and Kathy’s. But he didn’t. He and Wayne, legend has it, are the guys who created Slinger Nationals. By far my favorite event of the year was Nationals – what it was, the excitement it would build up. Trickle was a racer who wasn’t always just looking out for Dick Trickle. He had a sense of what was going to be good for the promoter…good for the sport…good for competitors…and good for the fans. 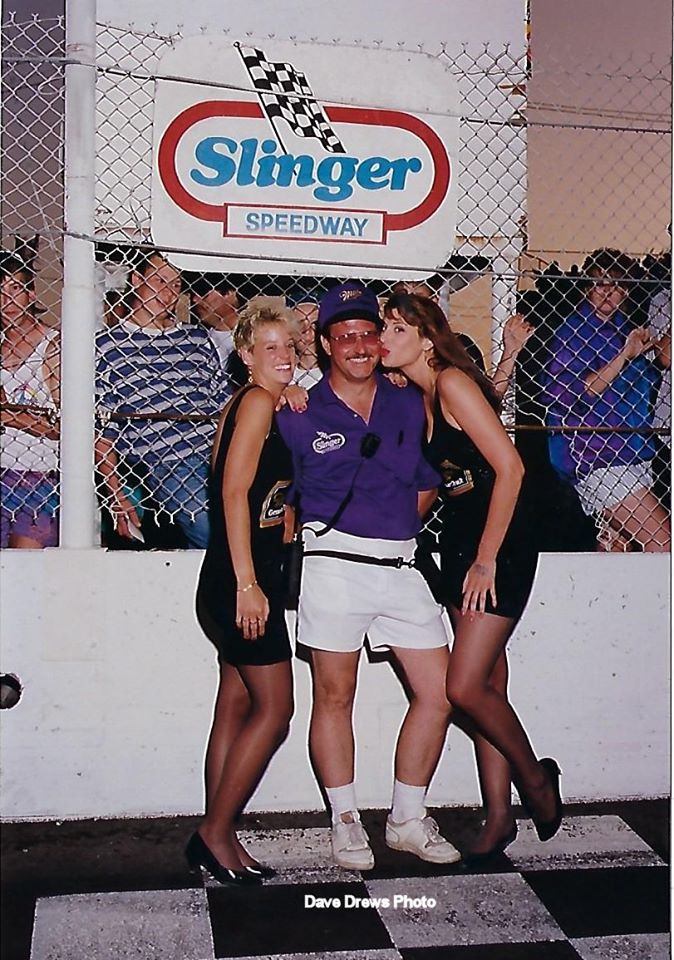