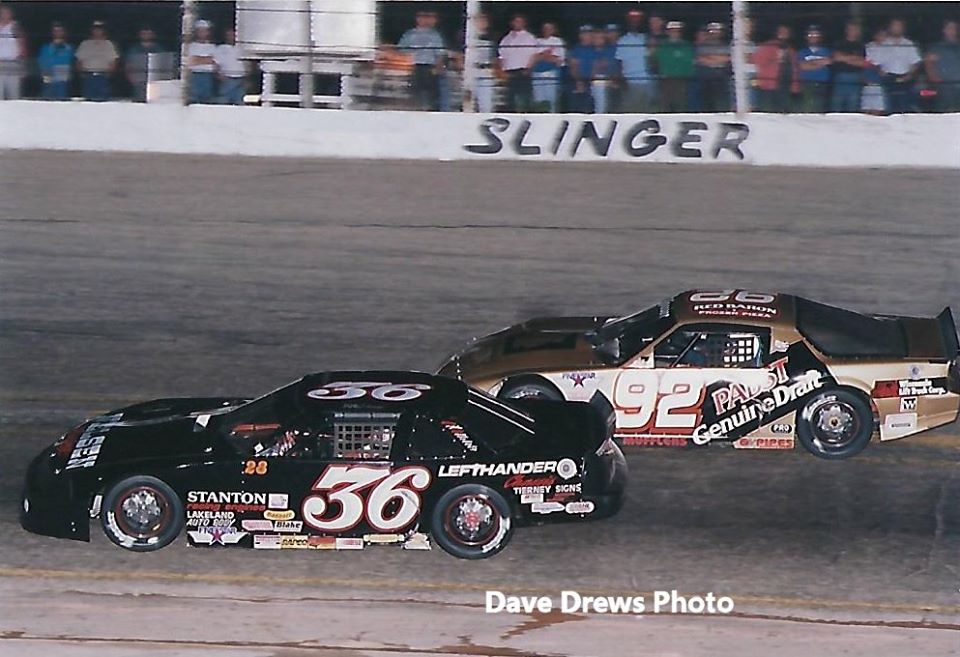 Question 1. Who do you need to thank?
Crew: My wife Lisa (Thank you for not only staying involved with our racing at home and at the track, but being so supportive of my passion for racing, for all these years.)

Dave Behling and Lori, Scott Lynch and Lori, Mike Vogt Jr., Mark Vogt, Harold Butschke, Roger Lindsay and Tyler Pudleiner. (Thank you for all your time working in the shop and at the track, and your time away from loved ones, wives and families.)

Question 2. How did you get your car number (#92)? And why have the majority of your cars been blue?
Answer: When I was 16-17 years old, that was a popular radio station. I chose it as my number and blue because it has been a favorite color of mine.

Question 3. Which Slinger driver (past or present) do you respect the most?
Lowell Bennett, because he is very competitive and a very clean racer. He always races everyone with respect, and I’ve never heard him say a bad word about any of his competitors. He is also highly respected in many Wisconsin short track racing series.

Question 4. How did you get into racing?
My uncle Dale raced at Jefferson when I was 15 years old and we used to go out on Saturday nights and watch him. After watching him race for close to a year, he helped me get started. You had to be 18 to race and my parents didn’t want me to race, so I forged their name on the release form; that lasted about a week and they decided I was going to race one way or another, so they consented and the rest is history.

Question 5. What do you like most about Slinger Super Speedway?
That Slinger has always been a highly competitive race track and it is known throughout the Midwest for being one of the fastest race tracks. Also, the opportunities to get to race against NASCAR stars, from Dale Earnhardt Sr., to Alan Kulwicki, Bobby Allison, Kenny Schrader, Dale Jarrett, Matt Kenseth, Johnny Sauter, Kerry Earnhardt, Davey Allison, Ron Horniday, Mark Martin, Kenny Wallace and Ernie Irvin.

Question 6. Why have you chosen to race at Slinger, rather than any of the other short tracks in the area, after all these years?
At this point in my racing, I have decided to race only one night a week and being that Slinger was my favorite track throughout the years that I have raced, the decision was made to keep racing there as long as I can race competitively.

Question 7. What would you tell someone, looking to get into racing or a younger racer about to start racing, that you wish you knew when you started?
Try to associate yourself with someone that has experience, can mentor you at the shop and at the track, and can get you the basics and helpful hints to be able to get you headed in the right direction.

Question 8. You have won 12 championships and have many other notable victories in your illustrious career, what one race(s) and or championship(s) stands out to you as a favorite in your short track racing career?
Winning the 4th of July, 200 lap, NASCAR race in Concord, North Carolina in 1990.

Question 10. If you could have dinner with any 3 people (alive or dead, real or fictional) who would they be? And why?
Dale Sr., Dick Trickle and John Ziegler because they are people that I have admired all of my life and have had tremendous accomplishments in their lifetimes.