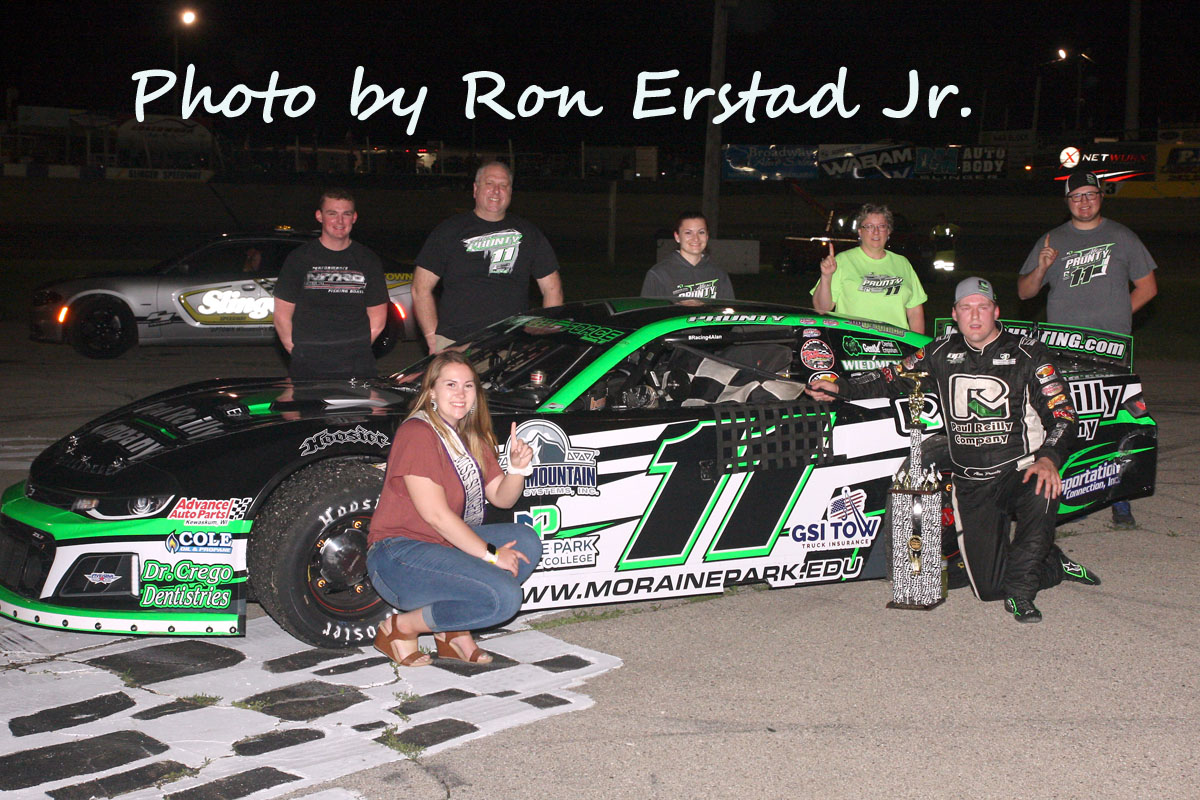 “The car just got better and better as the race went on, “Alex Prunty stated from victory lane after leading the final 66 laps to score the win, “I can’t thank my guys enough for getting it back together after the year we had last year and then coming here tonight and putting it back in victory lane.”
“The track was greasy from top to bottom and if your car was going to turn you wanted to be on the bottom and if it wasn’t going to turn you wanted to be up top,” Dennis Prunty said after leading a total of 17 laps before finishing second, “This is a new car and we still getting the bugs out and we still have some work to do.”
Perhaps the most satisfying run of the night came from Mike Held who raced with the leaders throughout the event before taking the checkered flag in third for one of the best super late model performances of his career.

“I have to give a huge thanks to my crew, my friends, and my parents for all the support as we’ve tried so hard and we’ve worked our tails off so hard this year and this is encouraging,” an enthusiastic Held said afterwards.

Casey Johnson and Alex Prunty led the field to the green flag as Johnson eased out front ahead of Prunty with Dennis Prunty, John DeAngelis and Mike Held following. Steve Apel and Rich Bickle began to move forward during the opening laps as well and they joined the lead battle by lap 11 when Alex Prunty was able to wrestle the lead away from Casey Johnson. Dennis Prunty moved into second place shortly thereafter as the first caution flag waved when R.J. Braun hit the turn one wall on lap 15. Dennis Prunty time the restart perfectly to grab the lead away from Alex Prunty as racing resumed while Johnson and Bickle disputed third place just ahead of Apel and DeAngelis with Rich Loch, Mike Held, and Jordan DeVoy within sight as well. With a quarter of the race completed, Bickle dove to the inside of Johnson for third entering turn three and the ensuing contact sent both cars careening into the turn three wall in a shower of sparks as the caution waved for the second time.

Dennis Prunty maintained the top spot on the restart but was immediately pressured by Alex Prunty with Steve Apel close behind. On lap 34, Alex Prunty was finally able to work his way around Dennis Prunty to take the lead while DeAngelis and DeVoy battled behind them. On lap 43, slight contact off turn four between DeVoy and DeAngelis sent DeAngelis’ car sliding through the frontstretch grass where it came to rest in turn one, drawing the caution flag in the process. Alex Prunty once again led over Dennis Prunty and Steve Apel as racing resumed while Rich Loch and Mike Held advanced into the top five. Held was on the move and chased down the top three as the race neared the halfway point. On lap 51, Dennis Prunty slipped off turn four and his car’s sudden stop resulted in hard contact from Apel who was racing close behind him. The contact was enough to severely damage the nose and front fender of Apel’s car as Held took advantage of the situation to pass both Apel and Dennis Prunty to move into second. A few laps later the final caution flag waved as Apel’s fender became dislodged from his car and rested on the backstretch.

Alex Prunty was able to keep the lead on the restart and he could not be caught as the final half of the event ran without a caution flag. Dennis Prunty was able to keep within sight of the leader but had to settle for second place at the finish. Mike Held finished a strong third while Rich Loch and Austin Nason rounded out the top five in fourth and fifth respectively. Brad Mueller finished sixth while Steve Apel took the checkered flag in seventh with his damaged car. Chris Blawat, Jordan DeVoy, and Grant Griesbach completed the top ten finishers.

Mike Held won the super late model fast dash and Steve Apel was the fastest qualifier with a lap of 11.234 seconds.

Ryan Gutknecht captured the victory in the 50-lap late model feature that was slowed numerous times under the caution flag.

Braison Bennett paced the early laps before Gutknecht took over the top spot on lap 10. Jon Reynolds Jr. advanced forward to challenge for the lead, eventually taking the top spot from Gutknecht on lap 23. During one of the caution periods, Reynolds left the track to correct an issue and Gutknecht reclaimed the top spot. Jack Stern proved to be Gutknecht’s biggest rival in the closing laps but Gutknecht was able to maintain his lead and score the victory. Stern finished second followed by Max Kahler who turned in an impressive run by finishing third. Defending track champion Jacob Nottestad advanced from deep in the field to finish fourth while Jerry Mueller was fifth.

Brady Held won the 25-lap Slinger Bees feature over Brandon Tackes and Paul Reagles. Ricky Gebhard and Zach Greer completed the top five finishers. Austin Omernick and Mitchell Strobel were the winners of the Slinger Bees heat races and Brady Held was the fastest qualifier with a lap at 15.219 seconds.

Tristan Swanson held off Gary LaMonte to win the 25-lap Legends feature in an exciting finish. LaMonte took the lead coming to the white flag but Swanson was able to cross over to the inside off turn two and reclaim the lead before holding on to take the checkered flag. John Holtger finished third followed by Austin Jahr and Dillon Schwanbeck in fourth and fifth respectively. John Holtger and Tim Brockhouse were the winners of the Slinger Bees heat races and Gary LaMonte was the fastest qualifier at 13.486 seconds.

Alex Hartwig won the 20-lap Bandolero feature over Laney Osborne and Tucker Bodendorfer. Ayrton Brockhouse finished fourth and Mason Surgener was fifth. Bandolero heat races were won by Axel Oldenhoff and Laney Osborne while Alex Hartwig was the fastest qualifier with a lap at 14.562 seconds. 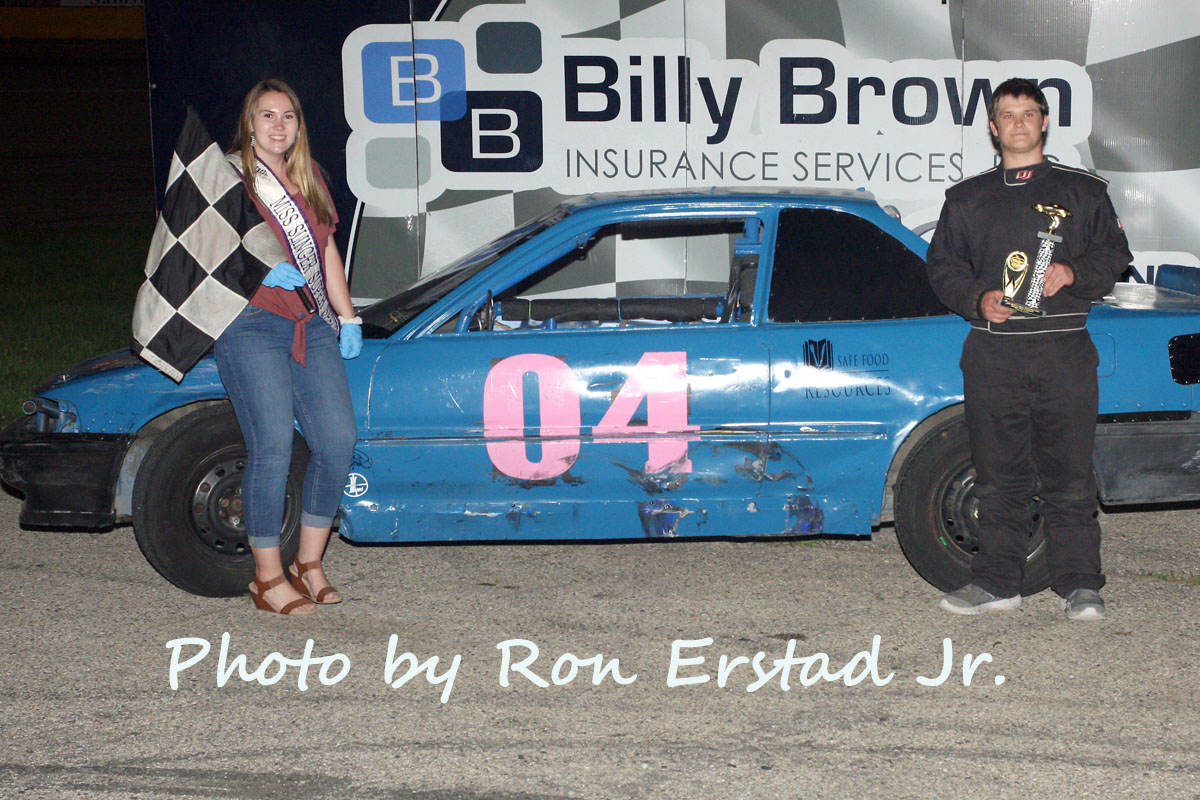 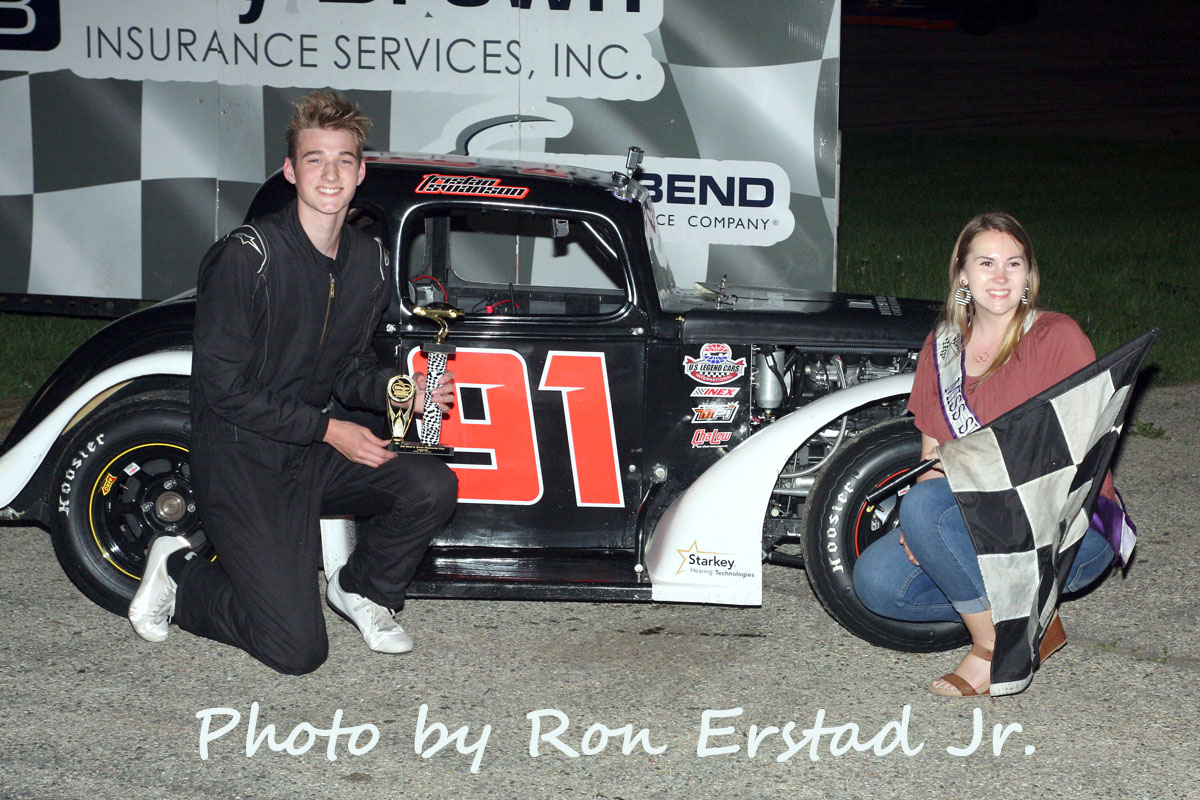 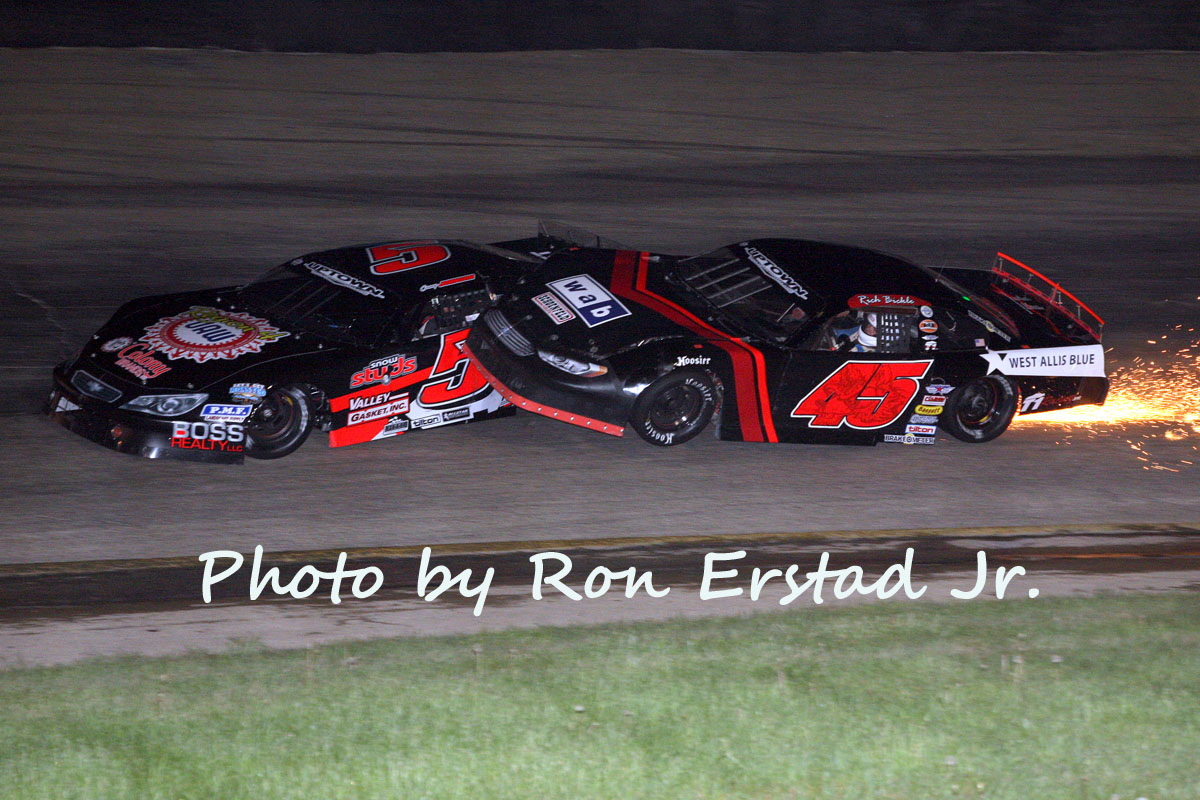 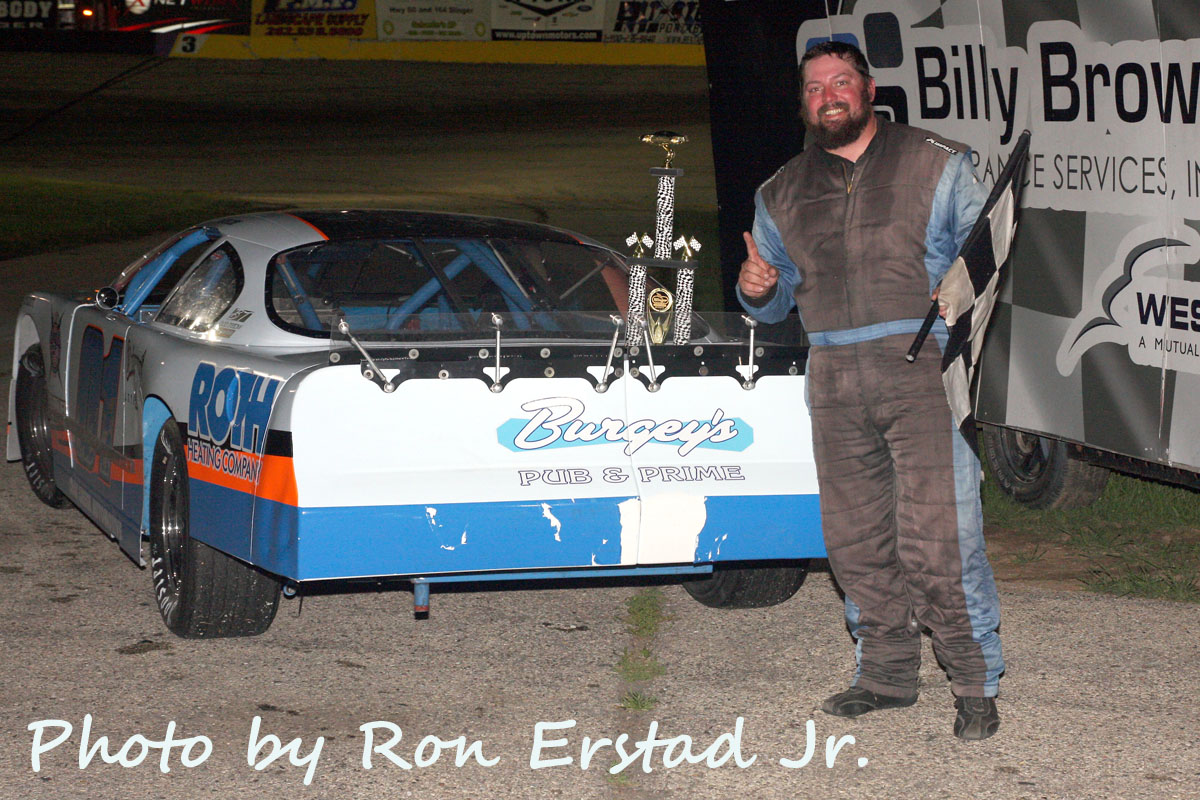 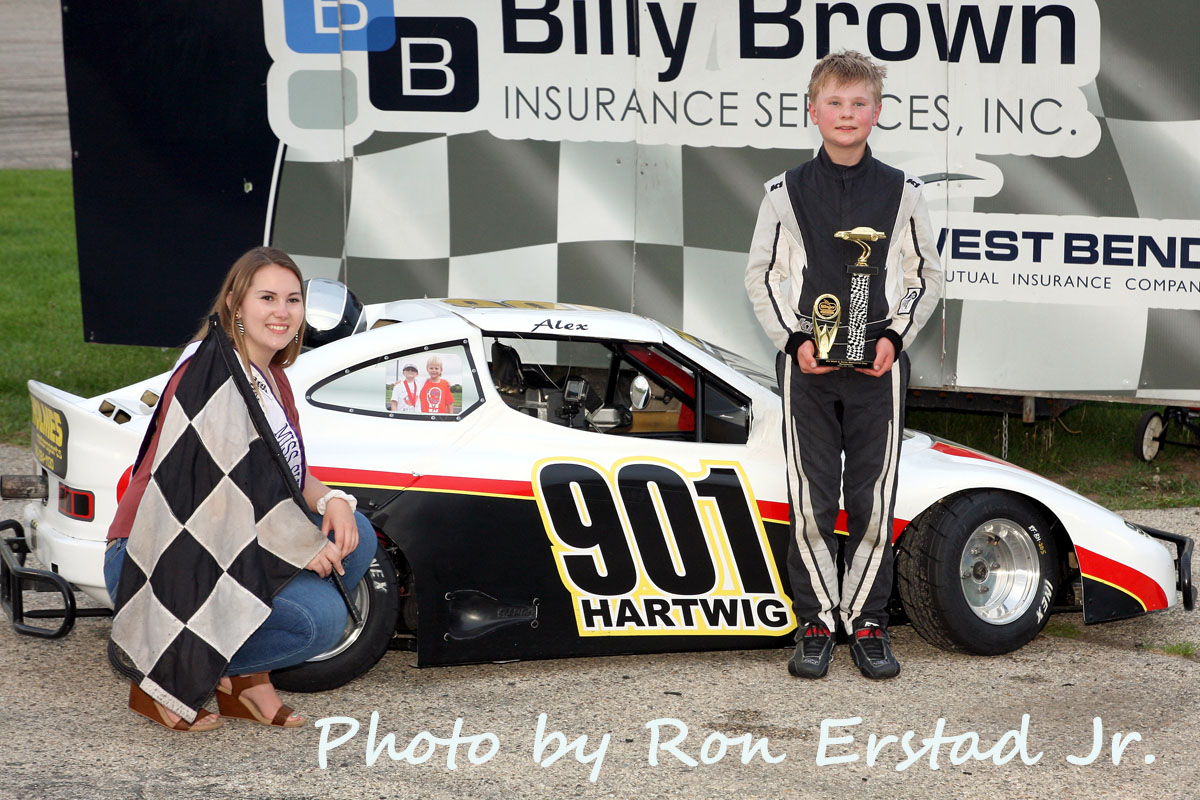 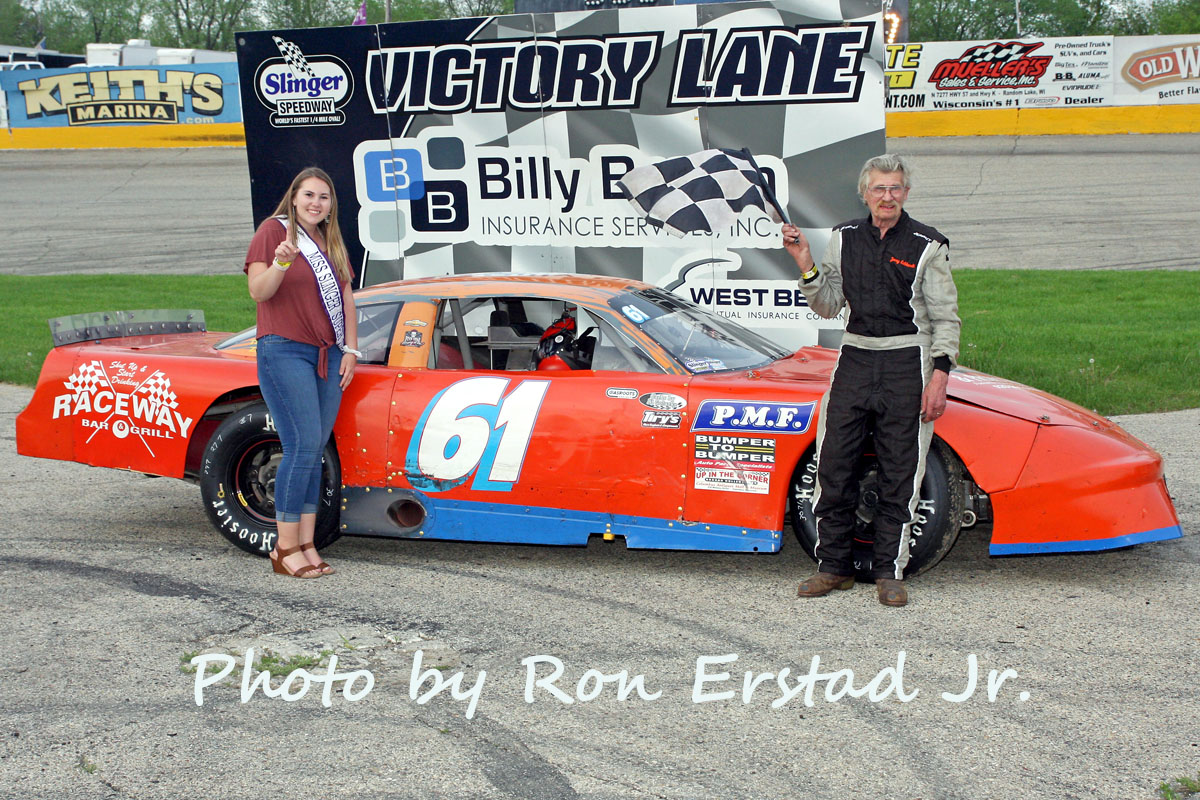 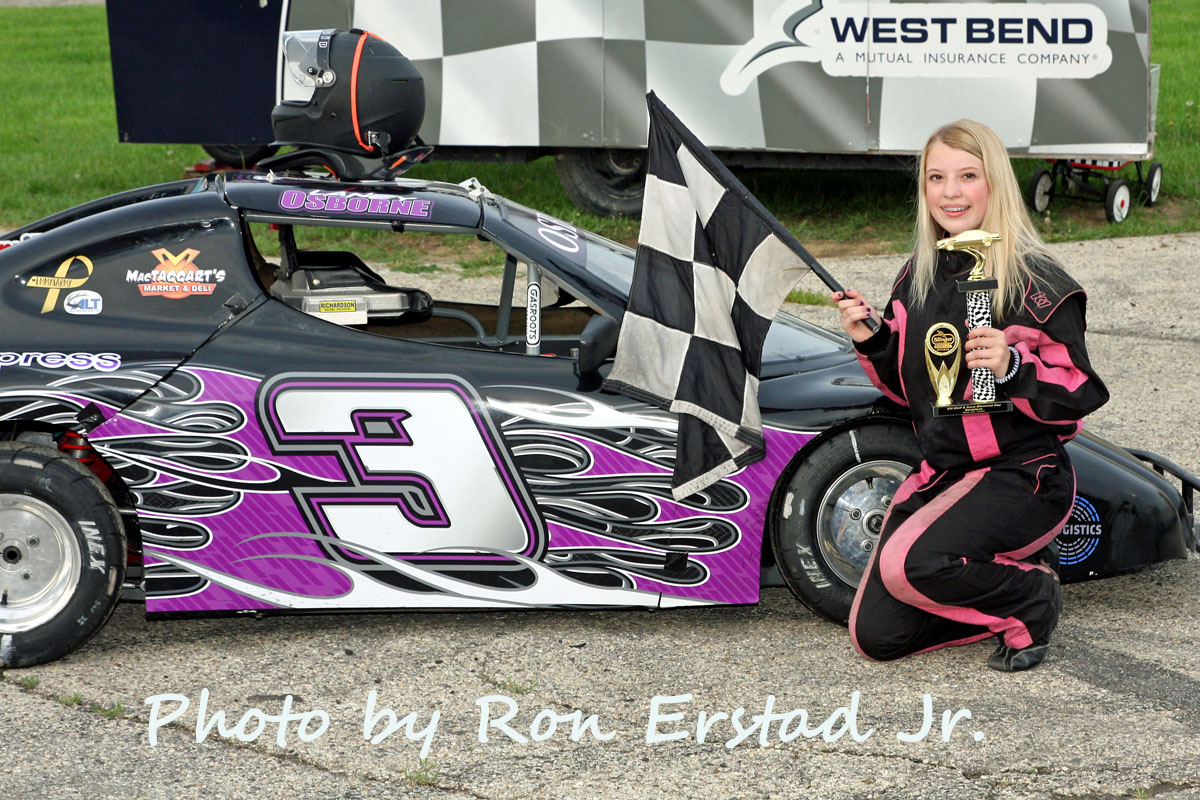 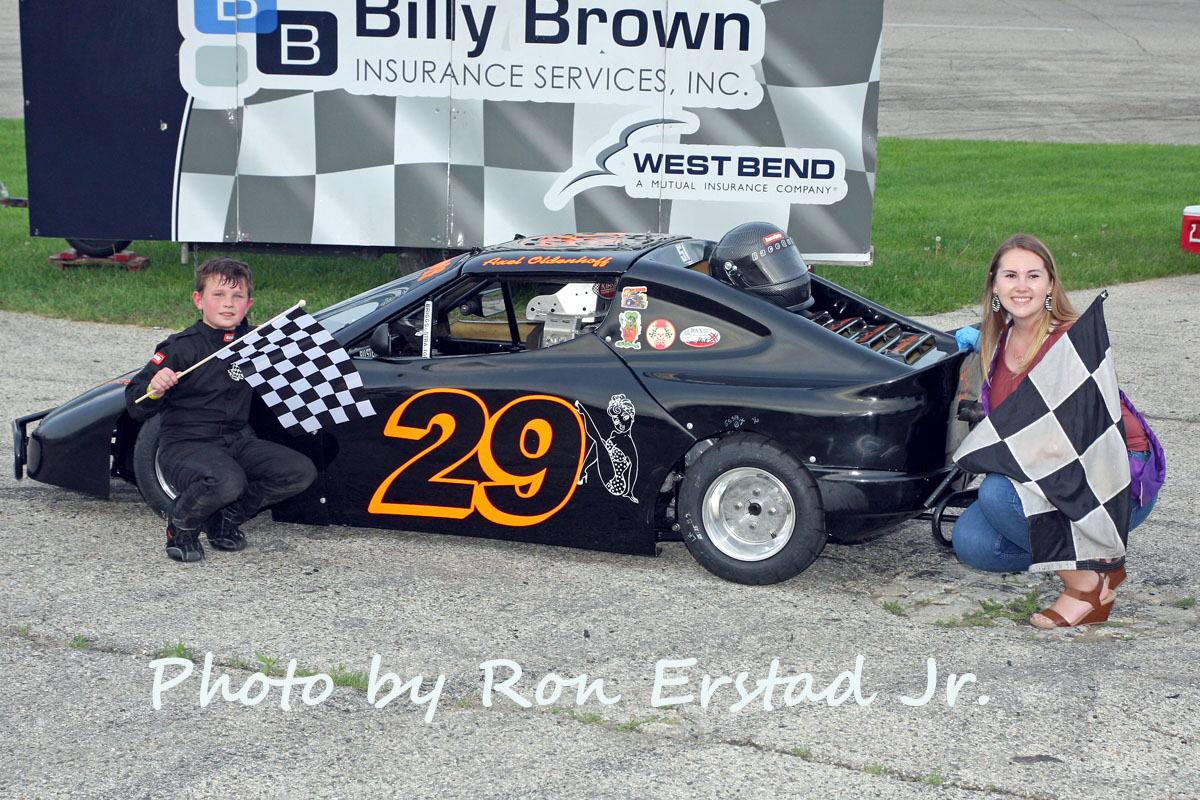 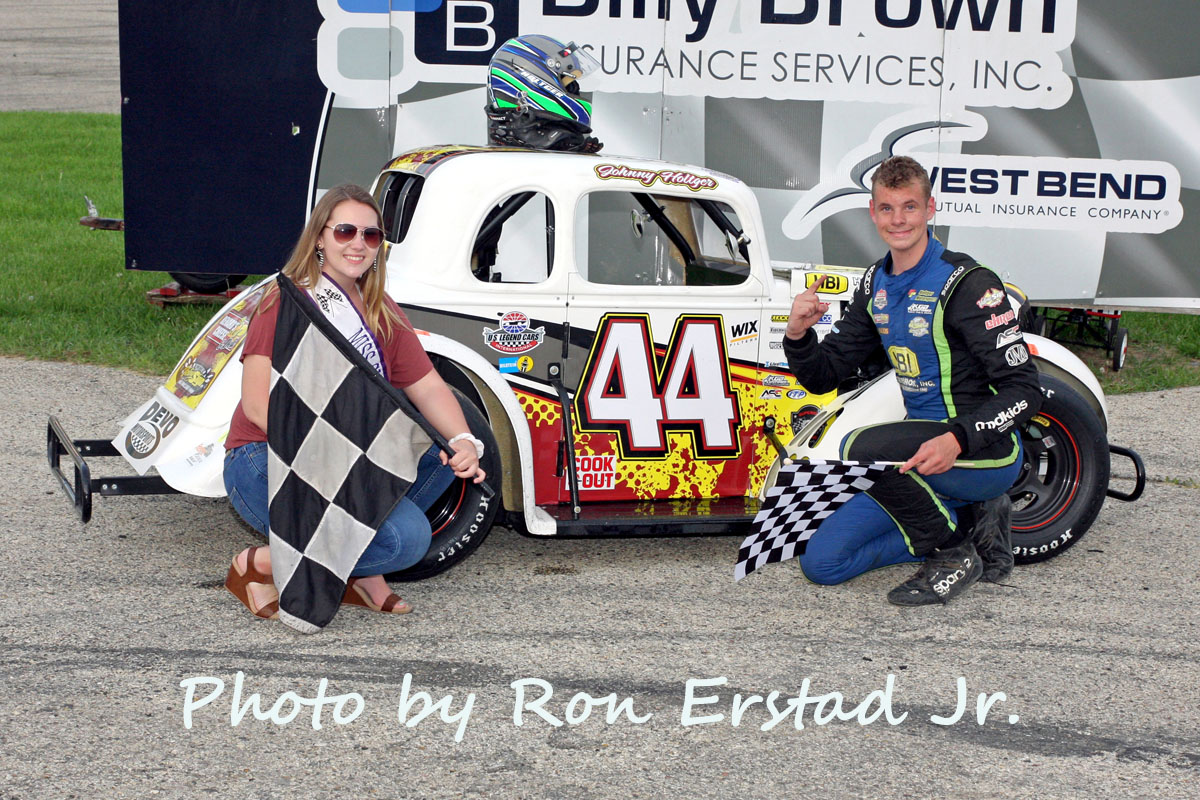 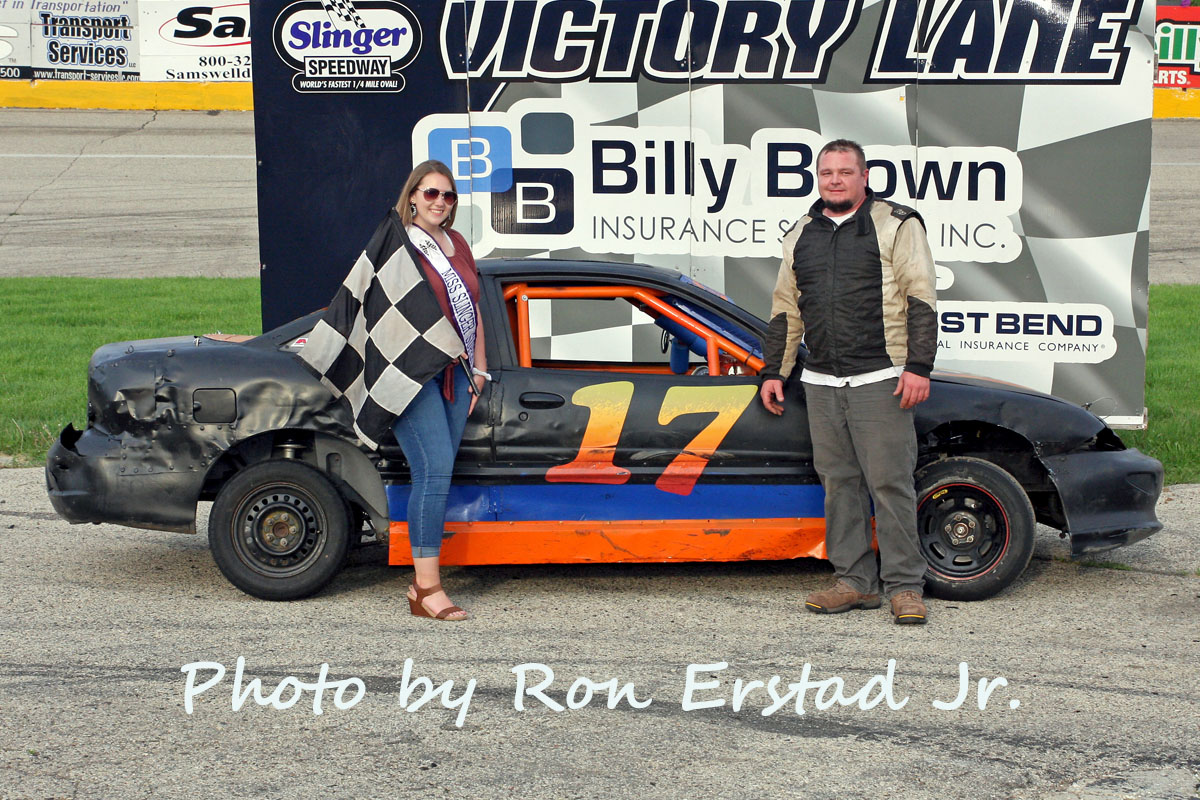 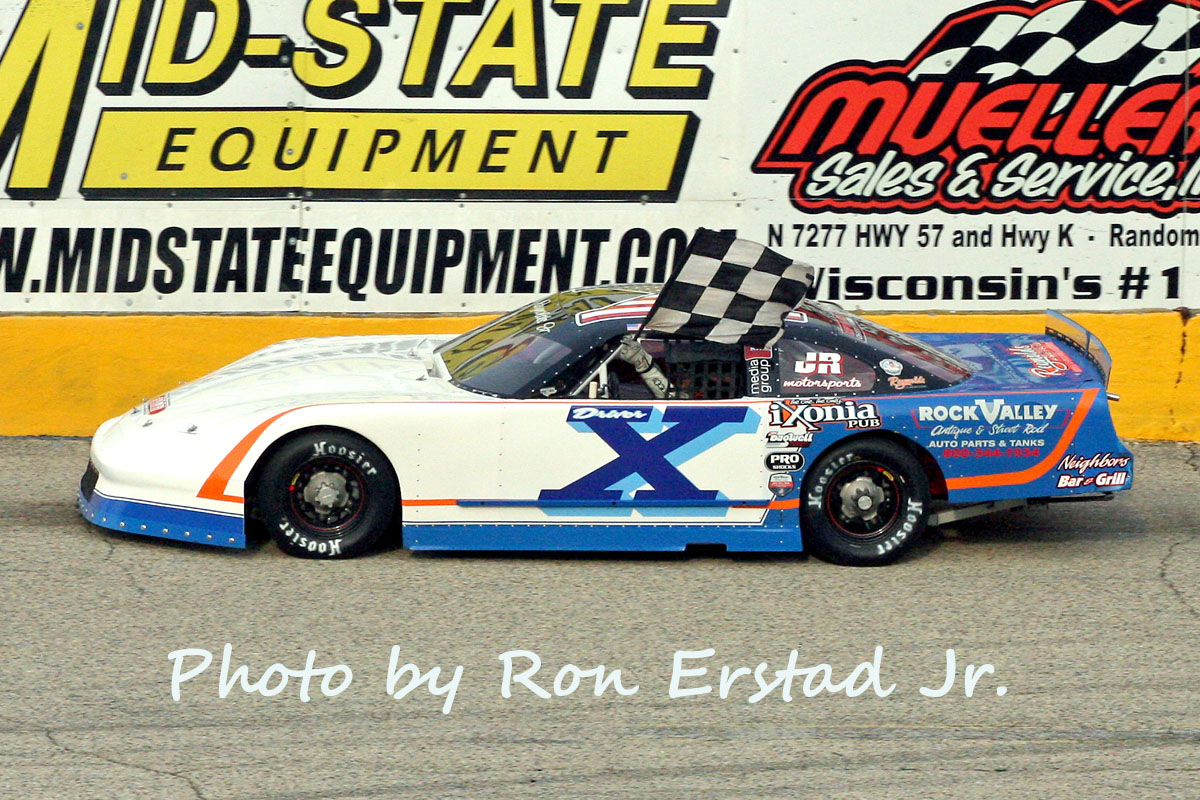 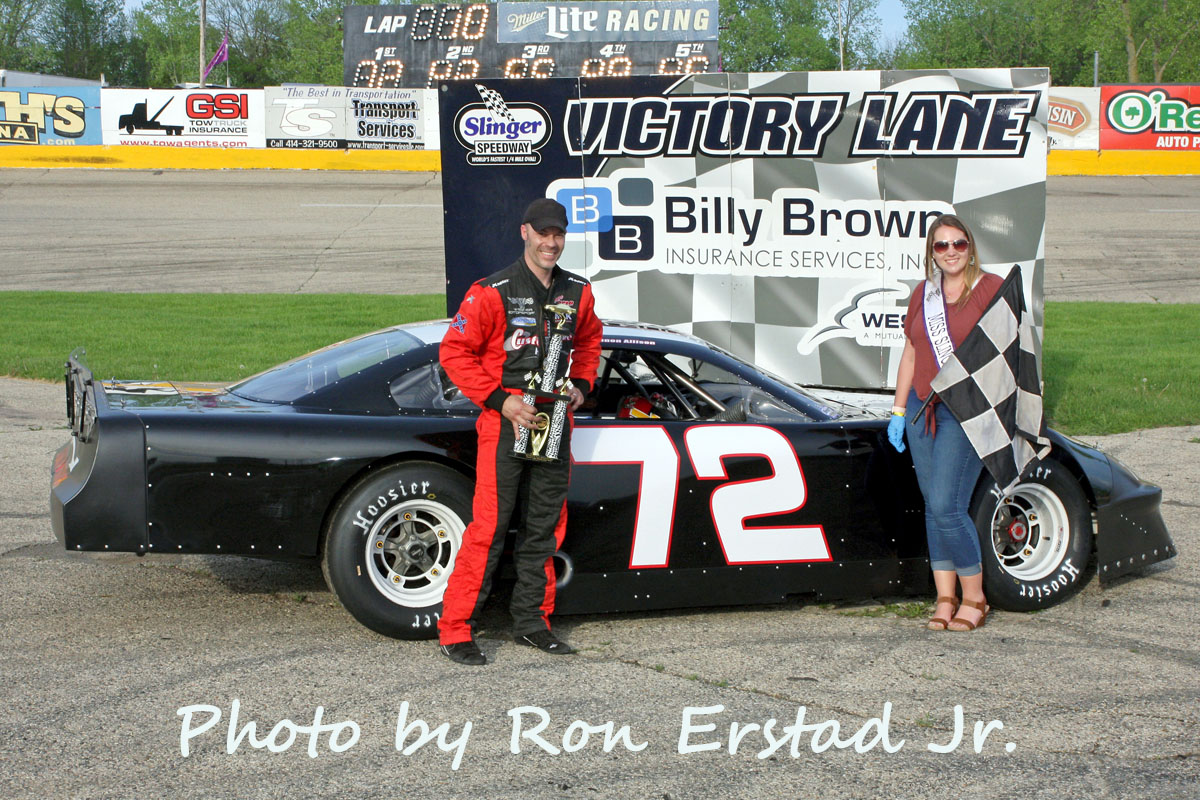 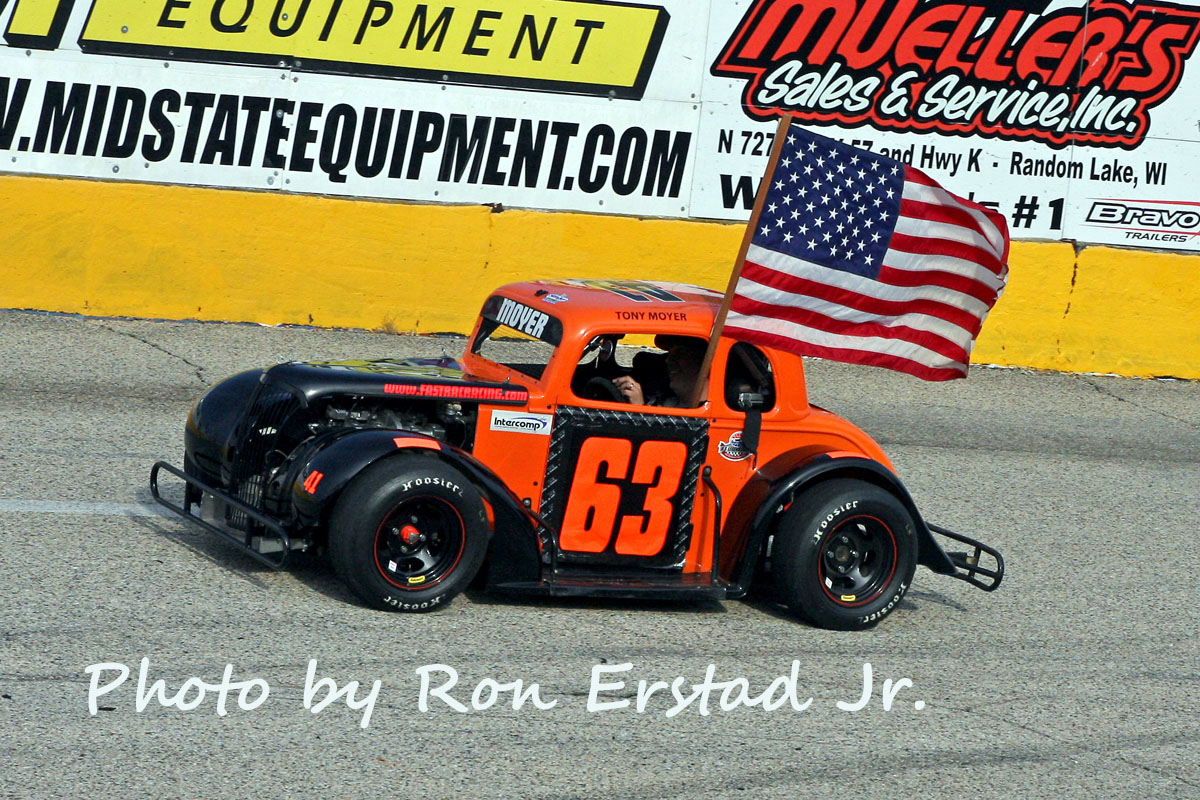 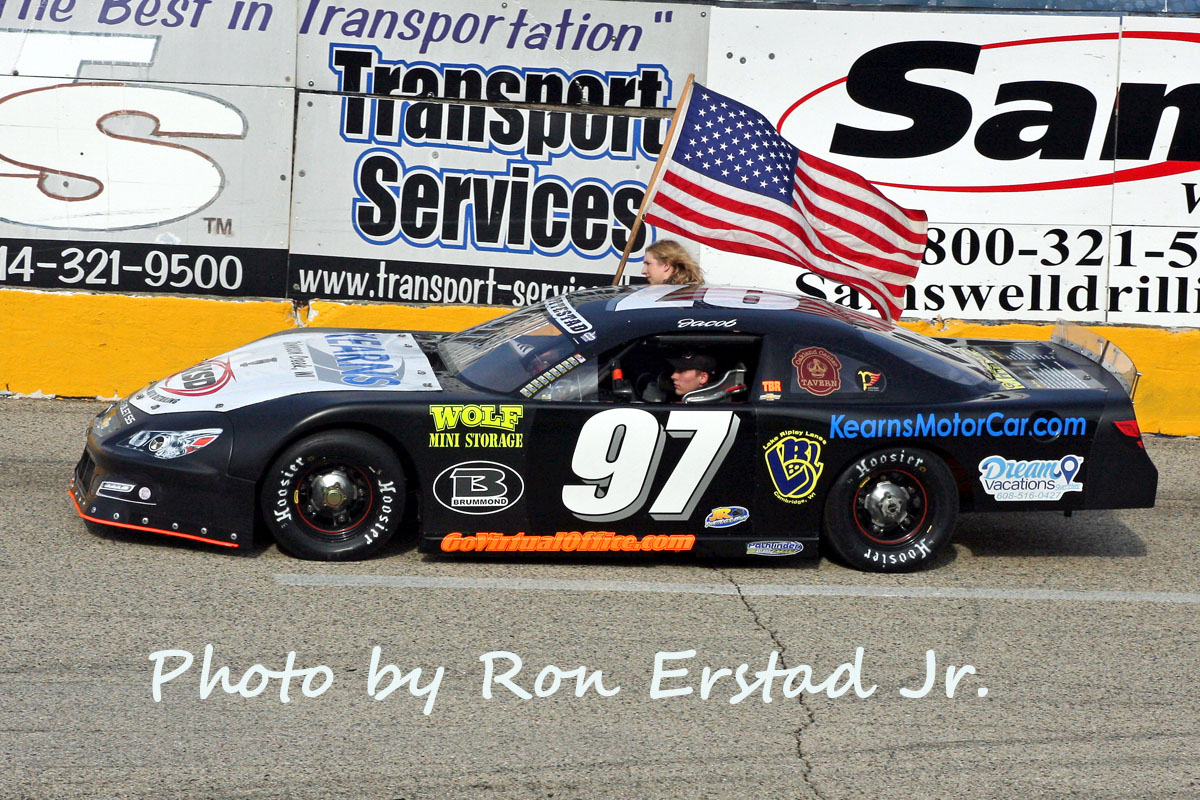 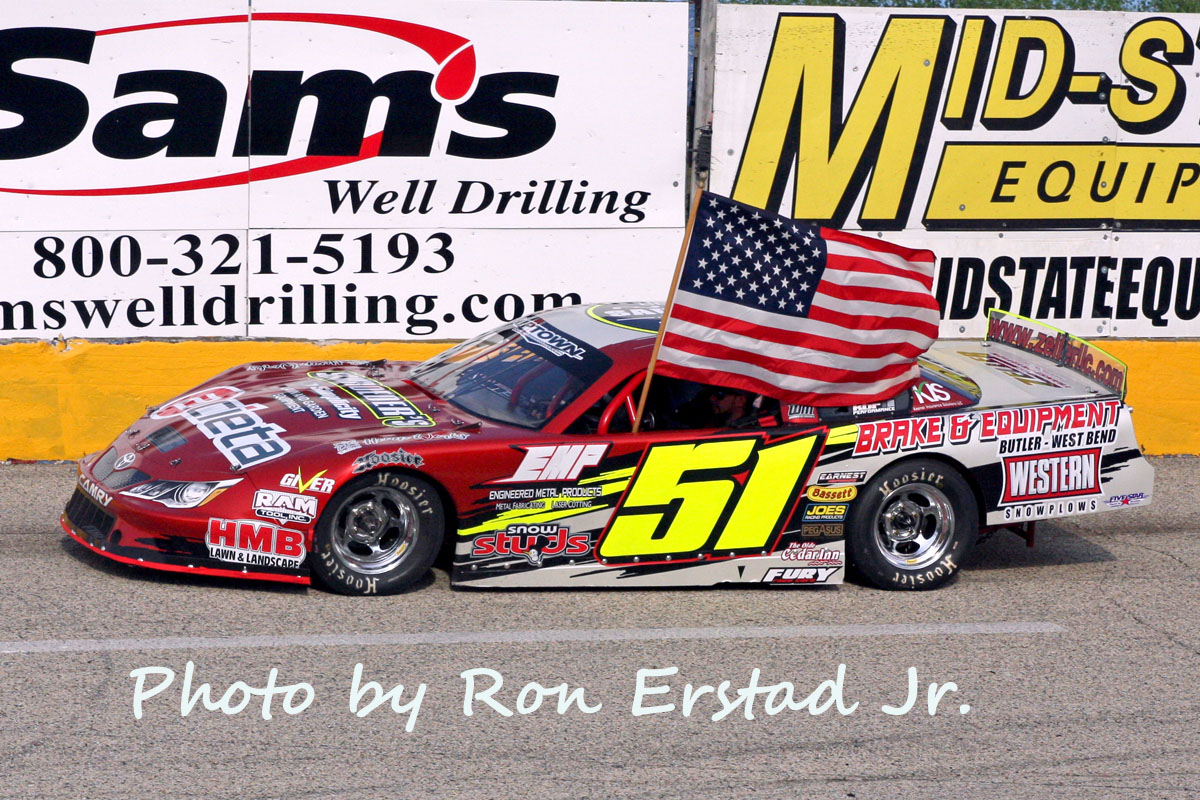