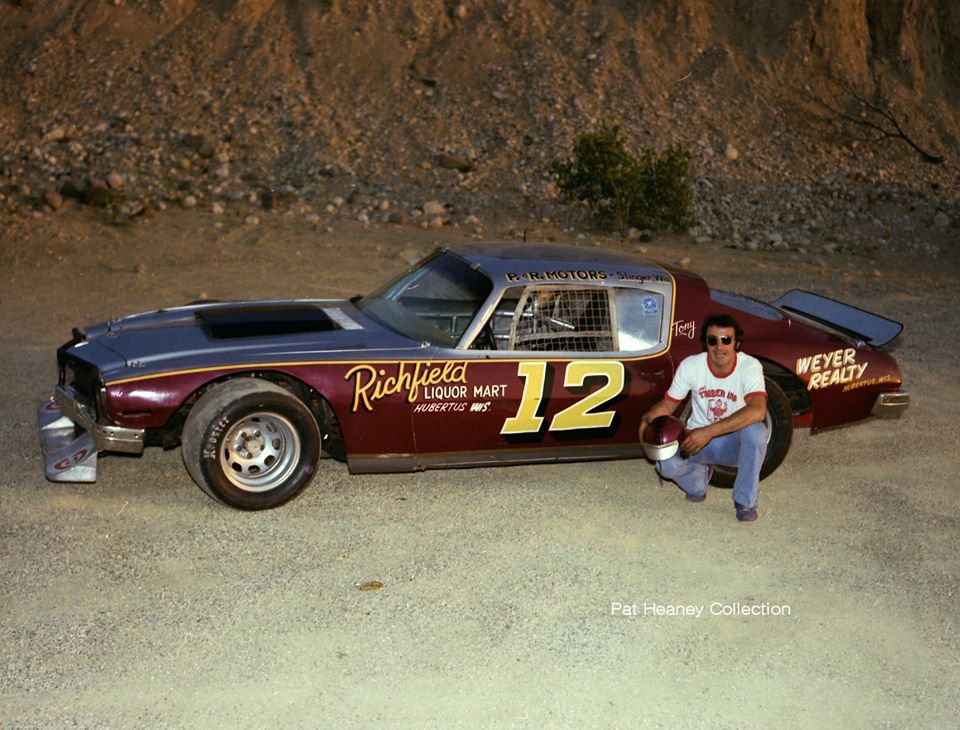 How did you get into racing?
I grew up on a farm and I was always hearing this noise on Sunday nights, like car rumblings, in the Slinger area. So my buddies and I decided to check it out one night. That was a little bit of the start. Then I got hooked up with my boss for 15 years, Wayne Erickson, and worked on a pit crew for him with my cousin Roger – I was 19, maybe 20. That got me going and we went all over…Cedarburg, Hales, Slinger with the modified, helping Wayne. So that was the start and then I started the Amateurs, went into Sportsman, then Late Models and built my own cars and that went for how many years.

Why did you stop racing?
I had a not-good thing happen…Gary Pomeroy died in 2009 and everything kind of went the wrong way then because of the economy. Gary was a very dedicated sponsor and business owner who helped me get where I was. I had a lot of great sponsors, but Gary was very involved and was involved with a lot of other guys too. He owned Big Red Machinery in Milwaukee. His death kind of put the kibosh on my career. I’ve always wanted to get back in. Still do. You just have it in you.

What do you like about Slinger Super Speedway?
How could I say anything bad about it? I helped build it, so I had a little bit of a feel about the way it was (laughs).

A recent (still in the works) compilation of feature wins has you with 68 so far. Do any of them stand out?
Of course quite a few. Mainly beating Alan Kulwicki. Second winning the Slinger Nationals, which I was trying for 19 years to win. Thirdly, 1976 when I was carrying that string of feature wins – 12 in a row – there was a time in that series when my car was broke from a previous race. I borrowed Wayne’s car – Billy Johnson was driving it at the time – and I ended up winning to keep my string going. Then I think it was the 10th or the 12th race where I blew an oil line and I really had messed up the track so they had a serious floor dry issue. My crew chief, Ron Schaefer – a really dedicated guy – fixed it and they let me come back out. I started on the rear and won that race. Then Al Schill beat me for the bounty on the 13th race. I wasn’t really liked, but I was kind of loved by a lot of fans, I think. There were so many other features, and the fans were so loyal. But it got out of hand now. We built our cars back then. “Technology” was the brain of the individual that was driving. Technology today is money buying speed.

Who do you need to thank from your racing days?
All my loyal fans and especially ALL of my crew members including the final years when we were traveling all over. Both of my sons [Mike and Tony, Jr], and of course Jeremy Sandretti, Dave Magnus, Ron Schaefer, a guy from Rockford-Wayne Paczesny-he drove up just about every night to help me on my car, Bob Schneider, John Luedtke-the man who could build a car in less than a week, my tire guy on dirt-Tony Geiger-he used to go across the country to find these Bucron tires – they were a super-soft automobile tire, Norm “Sags” Saegert, Darwin Steldt, and Tom Steldt. Mainly my sons, and then of course Gary and all the sponsors. Beer sponsors. Boy that’s a list that would be never-ending. I‘m going to forget a lot of them, but still remember that car, that era, and the people that were helping. I’d also like to mention my 11-year-old son Eric. He wasn’t around when I raced before, but he will be if I get back out there.

You raced on Slinger as both dirt and asphalt. Which did you like better?
I liked them both because I beat the same guys! There’s a picture of me at Hales, with Kulwicki following me at a distance. Then another picture at Slinger the next night with him following me at the same distance. I grew up on dirt, and that helps your knowledge on asphalt in a way. It didn’t hinder me by any means, but it definitely was fun on the dirt.

How did you get your car number (#12)?
It started out when I got into SCRAM [Stock Car Racing Association-Midwest] and the first number they gave me was 214. Then I went to 15, then 9, then I went to 2 when Frank Smith beat me out for the Sportsman championship. I built my own Late Model in 1971 or 1972. I was always finishing a lot of firsts, and a lot of seconds also. So I thought if you can’t be number one, you gotta settle for number 2. I put the numbers together, and that’s how I came up with 12.

The night you broke the track record – did you know it? Are you surprised it has stood this long?
I kind of felt it was coming after hot laps. There were other people close but when I could full- throttle it through one and two, and three and four was just a burp… I could feel the G force was unbelievable in the car. I can’t believe it still stands! I know some came really close, but I’m definitely surprised. The reason I’m so surprised is the technology from back then to now – now is way more advanced from what we did in 1994. It was an experience that I will never forget.

How did you get the nickname Tony the Tiger
I don’t know – from the cereal box, I think. It was all nicknames back then…Mouse, Hound, Rabbit. Mouse was one of the guys who inspired me.

Did you ever consider moving to the next level?
I had the opportunity to go with everyone else who left Slinger. Ted Musgrave offered me a Busch ride and got me something lined up in South Carolina. But, I missed the opportunity and stayed in Slinger. I didn’t go because the kids were young.

Which Slinger driver (past or present) do you respect the most?
I have to go with Alan Kulwicki. In our era, when I raced with him, that guy was so smart with his mechanical degrees. He would come over to my house after the races and look at my car (if he didn’t look at it at the track during the races) and always ask me questions: “Why are you running this there? Why are you doing that? He was always so curious. We were really big rivals on the track, but we both had a lot of respect for each other. I have respect for a lot of other drivers that I raced with…Conrad Morgan, Lowell Bennett, Al Schill…the list goes on. I would put Alan on the top, though. I also want to mention the fact that I was racing against my son, Mike. It was always a challenge to race against my son because I wanted him to win so bad but I was also out there competing against him. He was faster than me a lot of the time. But he never got that first feature. It was inspiring to race against him because I wanted him to win so bad.

You mention Conrad Morgan – is it surprising to you that he’s still out there every Sunday?
Yea, in a big way, and of course Jerry Eckhardt who’s been out there frickin’ how many centuries?! He was my best man at my wedding! I’m surprised Conrad is still doing it and Jerry’s still doing it. I know physically I could still do it and I always keep telling everybody I’m going to get back out there. Last year I actually had a pretty good sponsor lined up, but I was too busy working. The kids said, “You’re crazy!”. I said, “No, I was crazy to race for 35 years!”.