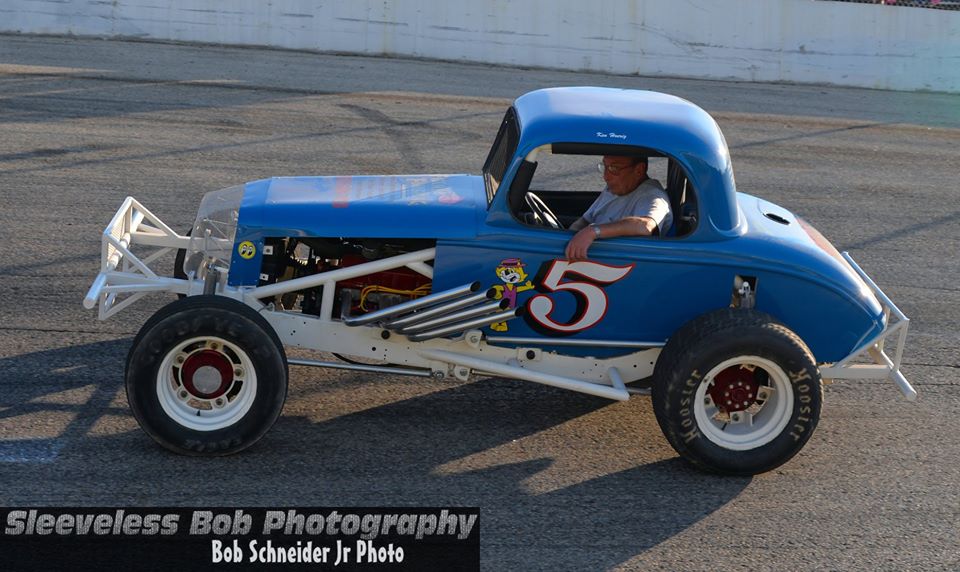 How did you get into racing?
It was 1974 and the guy who lived across the street, Darrel Werkmeister, had a racecar. I started helping him, and he asked, “How’d you like to be on my pit crew?”. That’s where it all started. I helped him for 3-4 years, then Frankie Heimerl for 6-7 years. Randy Czarnecki started building cars and I helped him for ten years. Then I helped Danny Cain until the Mods stopped racing at Plymouth.

What is your current Vintage Racecar?
A ‘34 Chevy frame, ‘34 Ford Coupe built by Roger Strupp and Wayne Erickson in 1968 for the ‘69 season. It was the first 4-wheel driver for the MSC. They outlawed it after the ‘69 season. It’s a 3-speed top-loaded Ford transmission with a ¾ ton ‘66 rear end, and a 350 Chevy motor.

How did you get into having a Vintage Racecar?
I had a car in 91-92, one that Bobby Ratajczyk built for Jim Fiscus. I went to car shows for a while and then put it up for sale. Then I saw this car one night, for $2500. I always liked the coupes and sedans, so I called the guy the next day and offered $1500. I called my buddy Mark Biertzer up, and in the daylight we found that the body was in pretty bad shape. From my days working with Czarnecki, I knew he had a ‘34 coupe cut down for a Mod, so I told him I was redoing Wayne Erickson’s car and wanted that body. Starting in the Fall of ‘99, Biertzer came out every Wednesday at 6pm and he’d work on the body while I worked on the frame and motor. My son was going to school to learn how to weld at the time, so he helped and it was good practice for him. By March we were done. But every year I’ve done something else to it.

Who is your favorite Slinger driver of all time?
Conrad Morgan. He’s a good driver and he is friendly.

Why do you restore/show Vintage Racecars?
It’s a hobby – I enjoy doing it. I always liked the old mods. My dad took me to Slinger, and then when I got my license I went every Sunday. It’s just in your blood.

If you could sit down with a table of six racecar drivers, alive or passed, any division/level, who would they be?
Number one would be Mouse. Then Etchie, Fuzzy, Aaron Solsrud, Tlougan, and Gib Wiser

What is your dream Vintage car?
I’d love to have one of Mouse’s or Etchie’s cars.

What can fans expect to see when the Vintage racers come to Slinger tomorrow?
I hope a lot of cars – we had 17 last year! I hope we can put on a good display. Fans can come on the track and ask any questions. We’ll answer them the best we can. I hope everybody has a good time! We’ll do parade laps and then some will do fast laps.