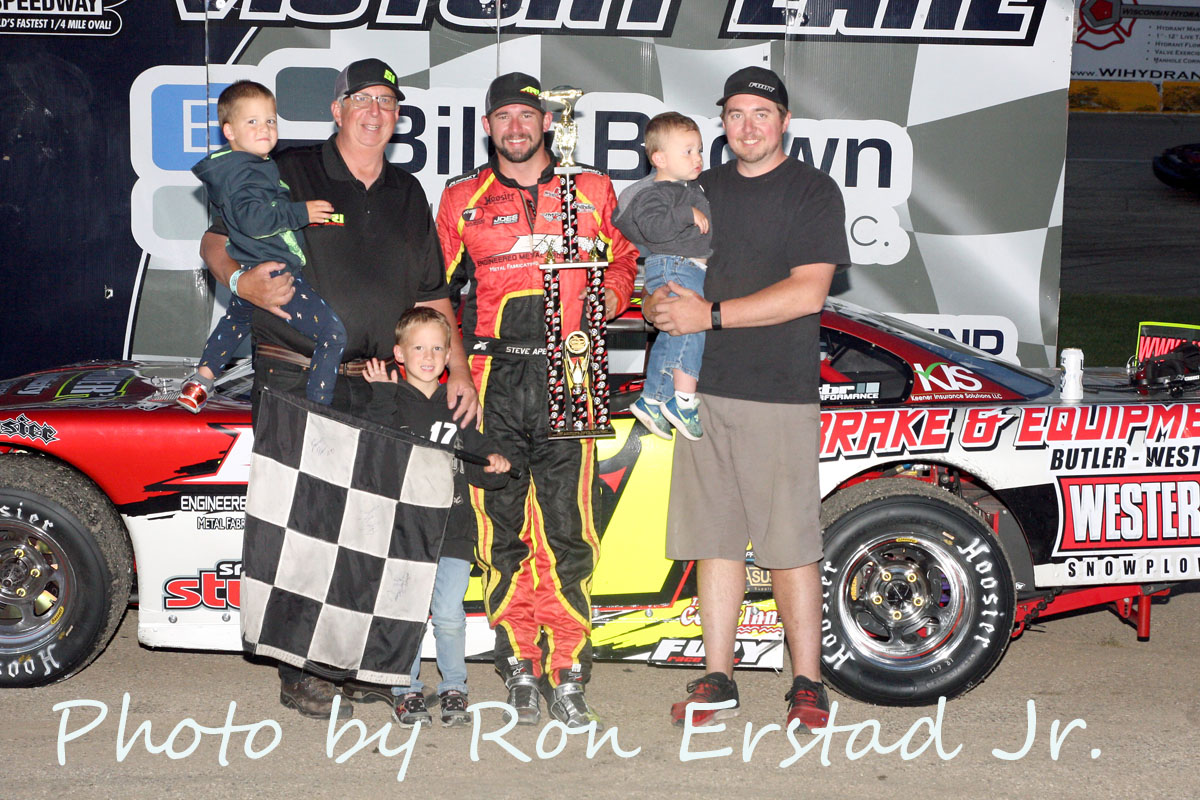 Slinger, Wis., June 21—For the second time in three weeks, Steve Apel worked his way to the front of the super late model feature field and drove away with the victory as he topped the PMF 75-lap main event Sunday night at the Slinger Super Speedway.

“I’ll tell you what, that was fun racing with Rich (Loch) and I could get clear of him and set sail,” Apel told the crowd from victory lane after taking the lead from Rich Loch on lap 11 and then capturing the victory over Brad Mueller, “I figured Brad (Mueller) was coming and wins like that don’t come very often and it’s been twice this year, but I’ll take it.”
“We had a good race and I was alongside Alex (Prunty) for a bunch of laps and then I got to the outside of him and it was a hard battle,” Brad Mueller stated after an intense late race battle with Alex Prunty to finish second, “We haven’t found everything yet and we are going to get better.”

“We’ve been playing with the air pressures lately trying to get better late runs,” Alex Prunty said following his third place effort driving his car that sported his father’s racing number on it in honor of Father’s Day, “All I had a fun week with my Dad and tried to get him a win tonight but a third place will have to do.”

Mike Held raced with the lead pack the entire event and brought home is second straight fourth place finish while NASCAR Gander RV & Outdoor Truck Series driver Johnny Sauter made a trip to the Slinger high banks to get ready for the upcoming Slinger Nationals and left with a fifth place finish.

“The car was bottoming out at first but it got better the longer it went,” Sauter explained afterwards, “We’ve got to figure out the short runs for when we come back but it was better than I’ve been but still not great so we’ve got a lot of work to do.”

Rich Loch paced the opening ten laps with Steve Apel settling into second place just ahead of hard racing for position between Alex Prunty, Brad Mueller, Mike Held, Luke Fenhouse and Brad Keith. Apel was able to run down Loch for the lead on lap 11 and those two edged away out front just before the first caution flag waved on lap 22 when Fenhouse slid sideways in turn two while trying to pass Held for the fourth position. Apel maintained the lead over Loch as racing resumed while Prunty moved ahead of Mueller for third and Brad Keith edged Held to take the fifth spot. The caution flag waved again on lap 38 when James Swan exited the speedway with a mechanical issue evidenced by white smoke trailing from his car. Once again Apel charged to the lead on the restart as Loch tried to fend off challenges from Prunty and Mueller. In the late stages, Prunty was able to nudge Loch out of the way for second on lap 67 and Mueller took advantage of the situation to slide into third. As Loch tried to ease back into line, his car came together with Brad Keith’s car which resulted in the two tangling into turn one to draw the final caution flag of the event. After some cat and mouse games between the leaders on a few aborted restarts, Apel was able to charge into the lead while Prunty and Mueller staged a side by side battle for second. Apel drove to the victory while Mueller edged Prunty for second with Mike Held and Johnny Sauter completing the top five finishers. R.J. Braun finished sixth ahead of Jacob Vanoskey in seventh and Chris Blawat in eighth. Justin Mondeik finished ninth and Nick Wagner was tenth.

Tyler Schley led at the start while Joe Shelby, Tom Berens, and Jon Reynolds Jr. battled for second. The first caution flag waved on lap 21 when Tyler Hromadka’s car looped around off turn four. Schley kept the lead as racing resumed and the caution waved again on lap 27 when Zach Prunty and Ryan Gutknecht tangled while racing for position. On the restart, Reynolds was able to power around Schley for the lead as Jacob Nottestad moved up to challenge Schley for second. Nottestad and Schley raced side by side until Nottestad was able to edge ahead off turn two. However, as they entered turn three, contact between the two sent Nottestad’s car spinning around as the caution flag waved again on lap 32. Schley and Nottestad exited the event after some extracurricular activities occurred during the slowdown. The events moved Tom Berens and Cole Thomas into the second and third positions behind Reynolds while Jack Stern and Joe Shelby advanced into the top five. Reynolds was on his game as racing resumed and he drove to the victory while Berens finished second ahead of Stern who advanced to third. Cole Thomas finished fourth and Ryan Crane made a late charge to finish fifth.

Jerry Eckhardt and Joe Shelby were the winners of the late model heat races and Jacob Nottestad was the fastest qualifier with a lap of 12.112 seconds.

Jacob Schraufnagel won the 35-lap sportsman feature in a barn burner finish with Ryan Gutknecht. Schraufnagel and Gutknecht took the white flag side by side with Schraufnagel on the inside and Gutknecht working the high side and keeping momentum by charging hard off the corners. As the two entered the first turn Schraufnagel’s low line angle combined with the skew of Gutknecht’s car to achieve maximum momentum off the turn resulted in flush door to door contact between the two and after they separated, Gutknecht’s car spun around as they entered the backstretch. Schraufagel took the checkered flag and kept the win after a video review by officials determined the contact was the result of incidental hard racing and not deliberate. Bobby Gutknecht finished second followed by Brian Holtz in third. Andrew Meyerhofer and Jay Kalbus rounded out the top five finishers.

Andrew Meyerhofer and Ryan Gutknecht were the winners of the sportsman heat races and Jacob Schraufnagel was the fastest qualifier with a lap at 12.723 seconds.

Jason Recker drove the Hanks Restaurant and Drinkery entry to the win in the Bar Cars race and Ryan Lovald won the Figure 8 race which brought the evening to a close at 9:25 pm. 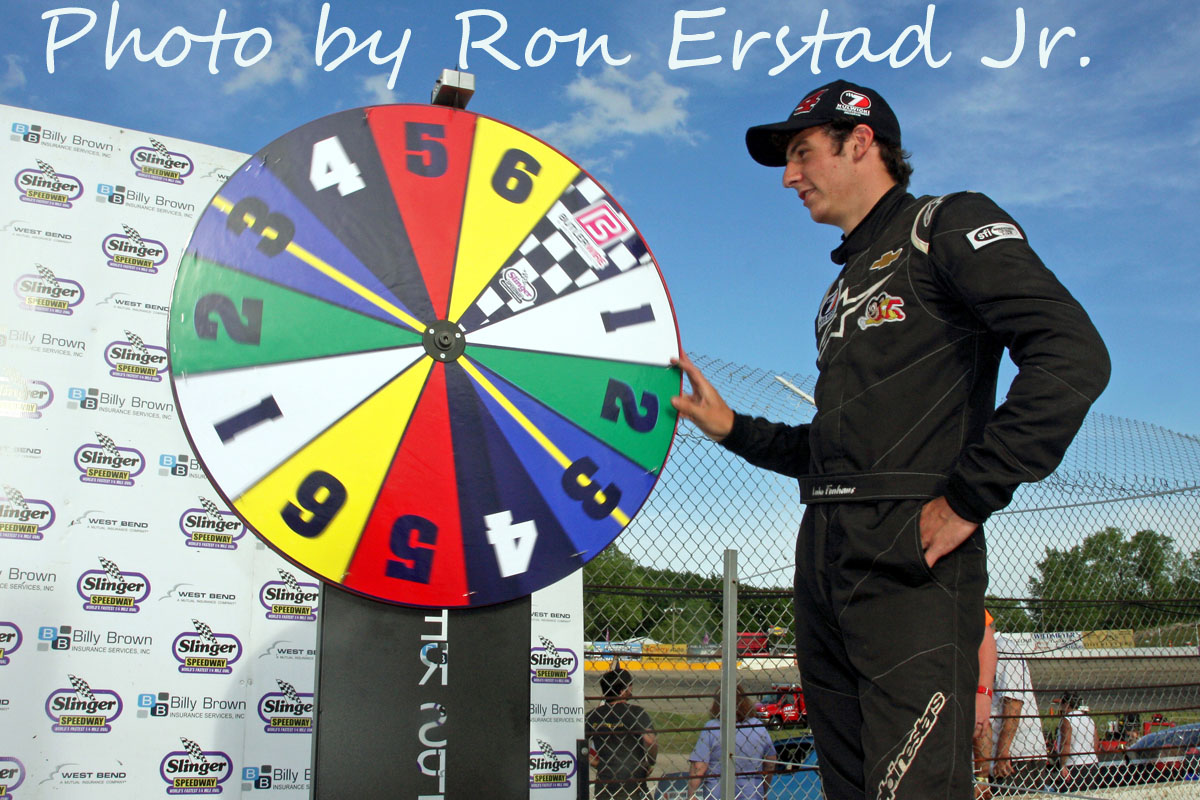 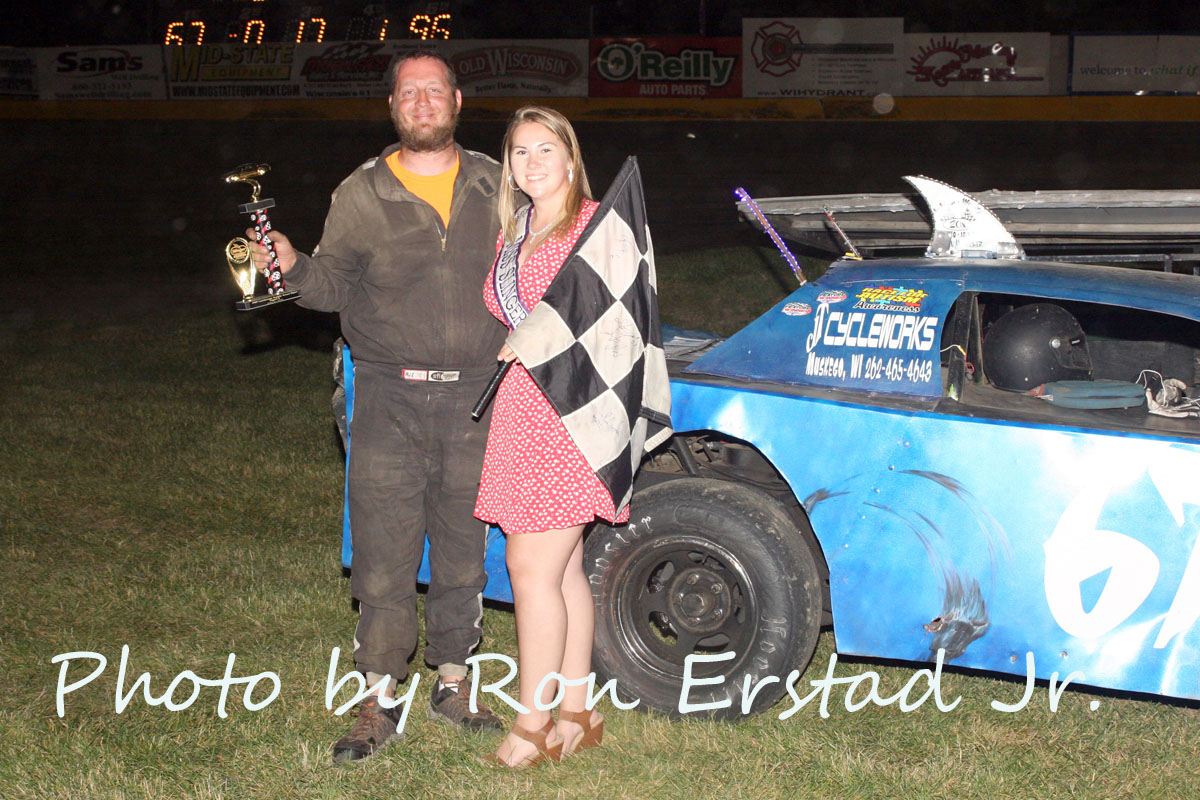 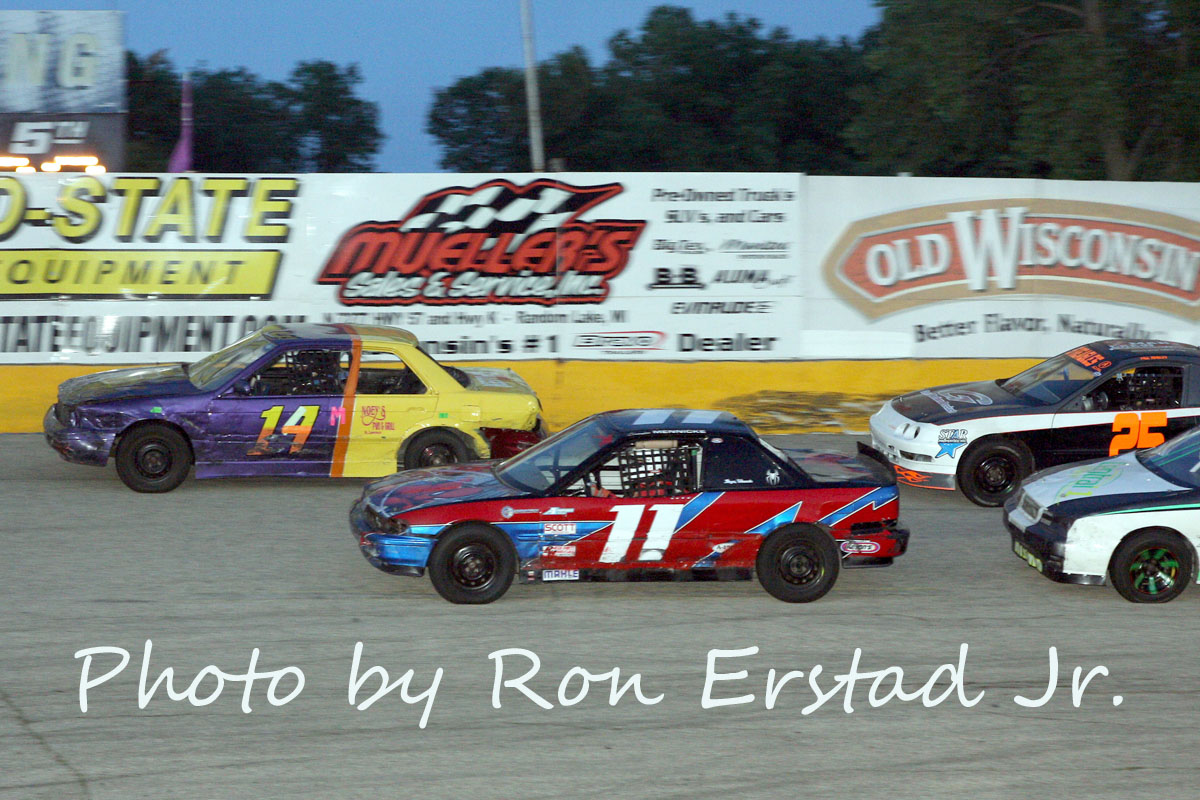 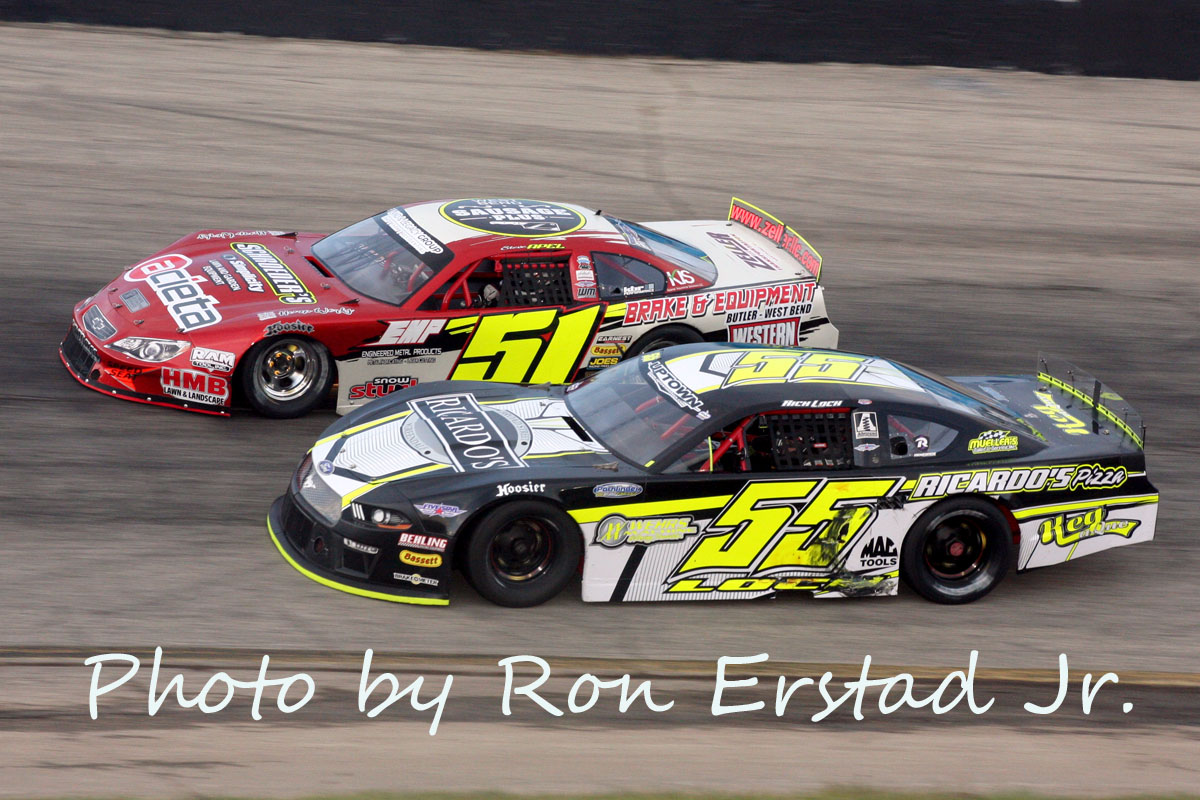 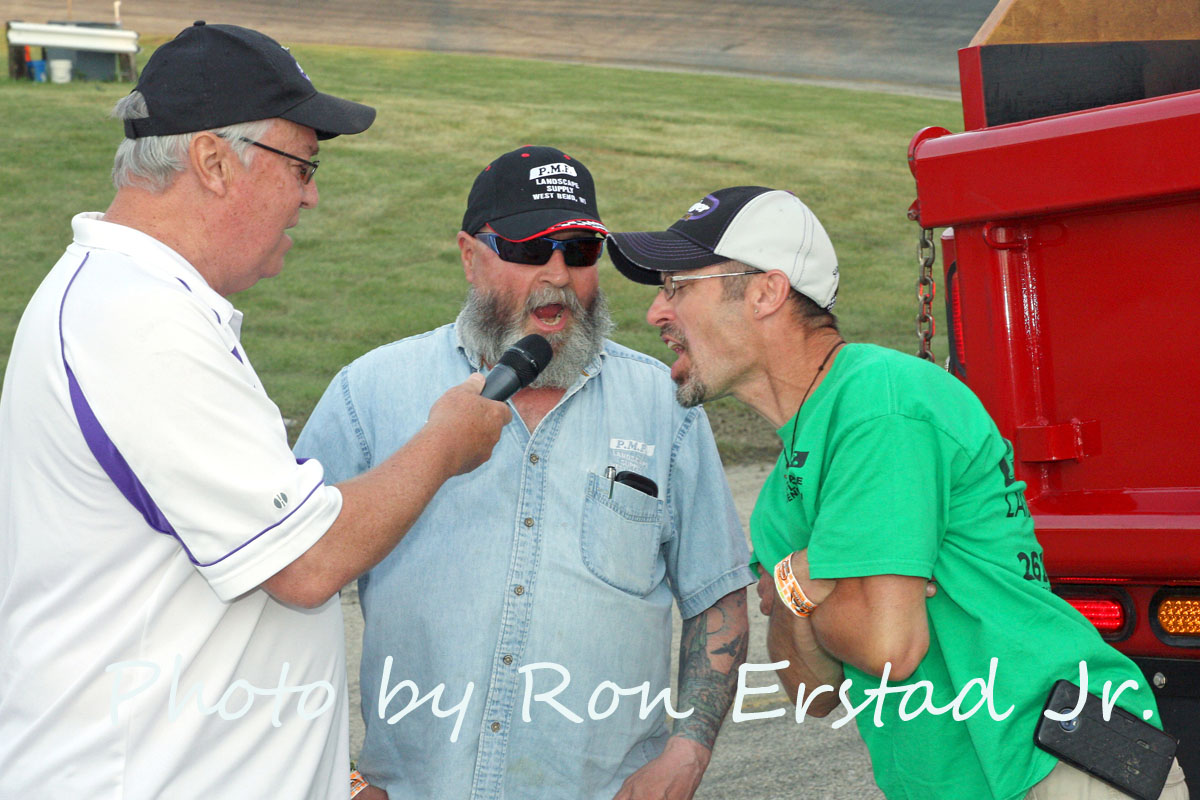 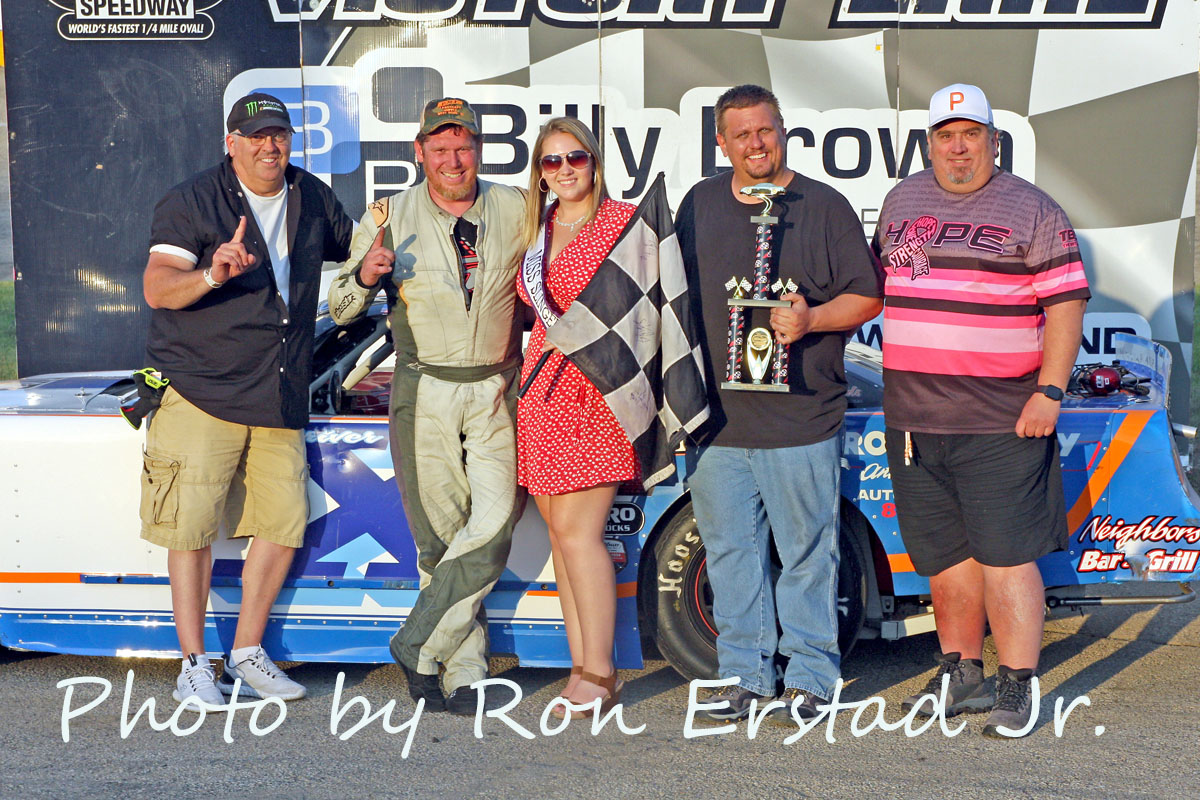 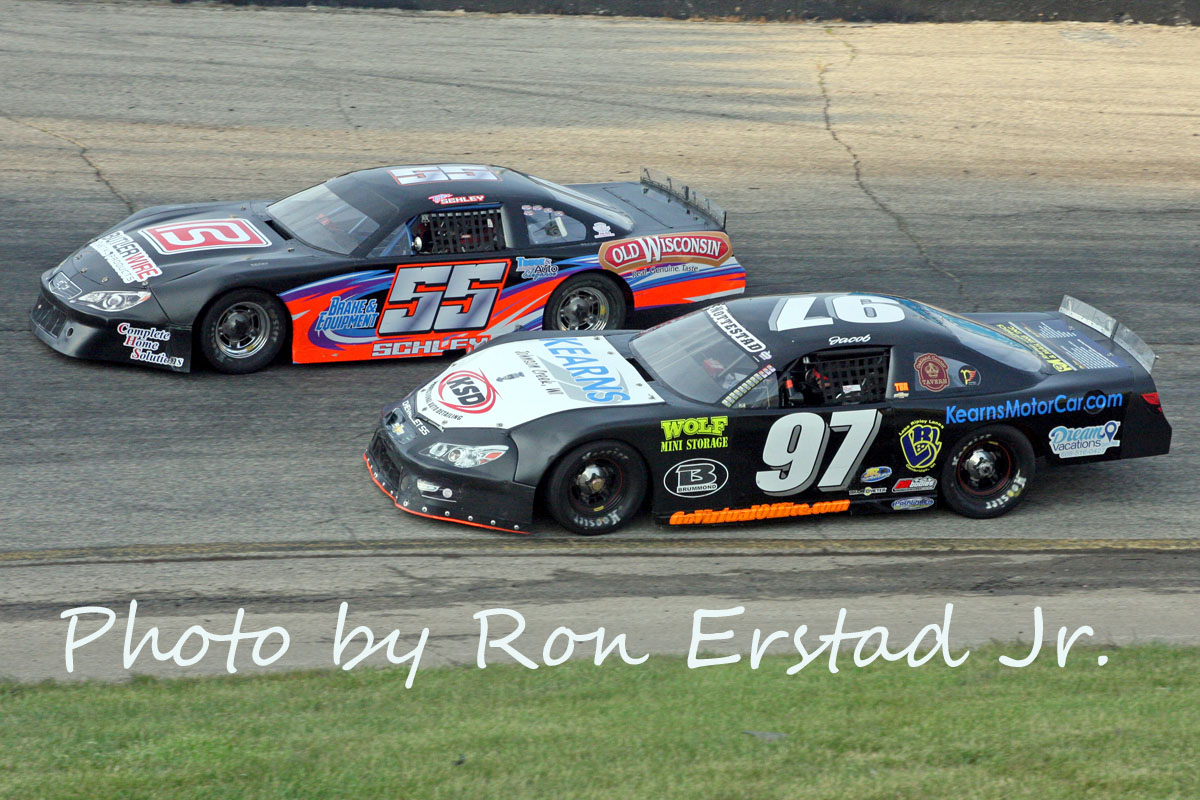 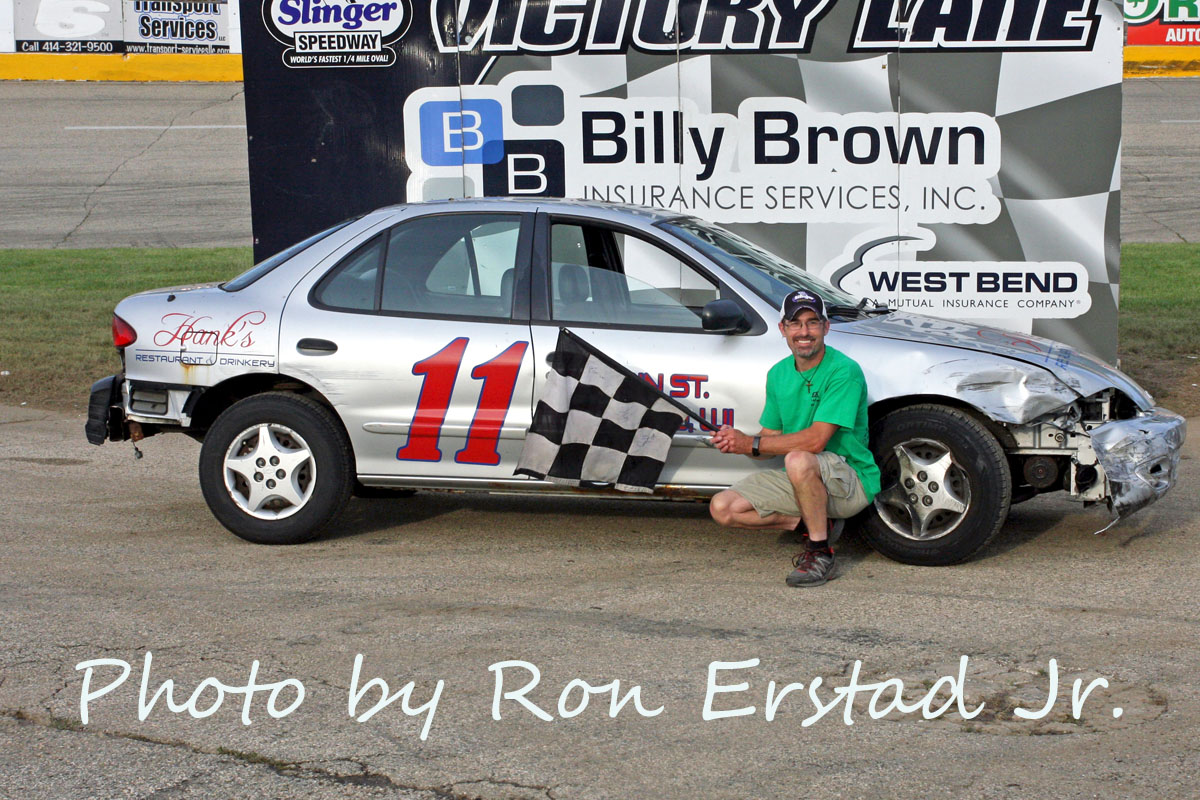 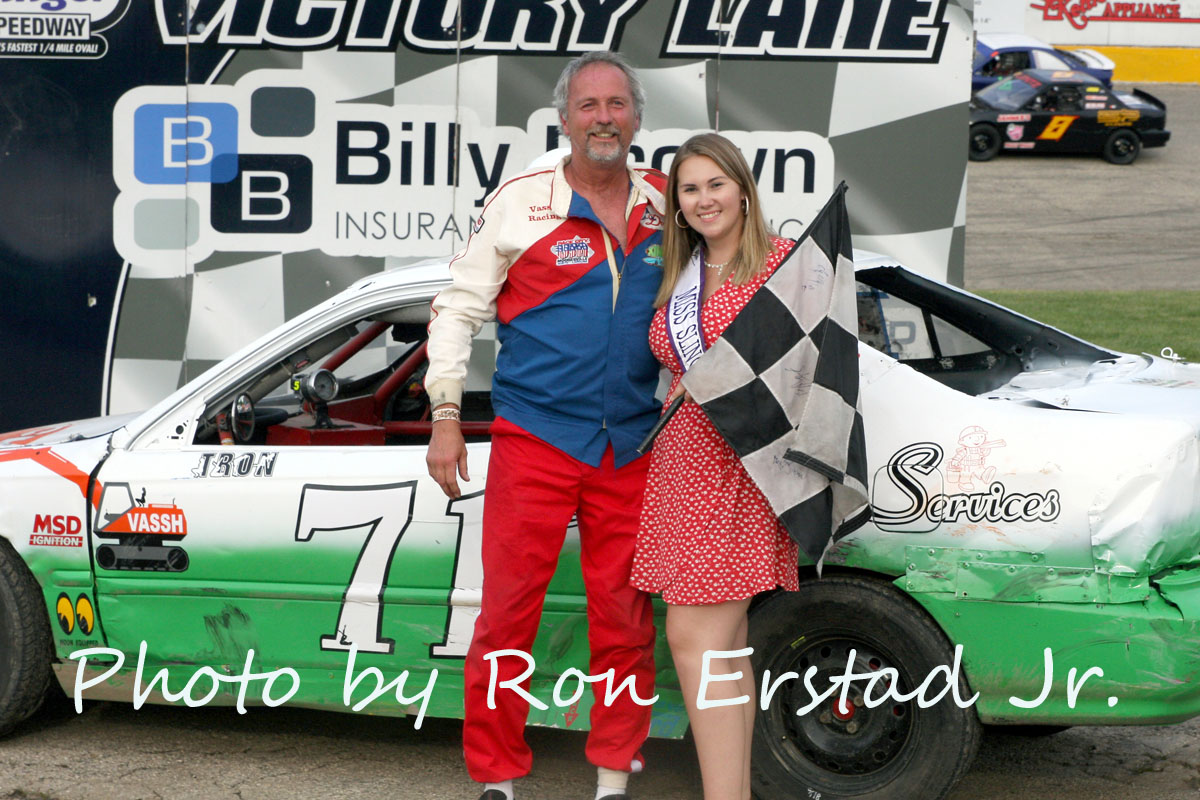 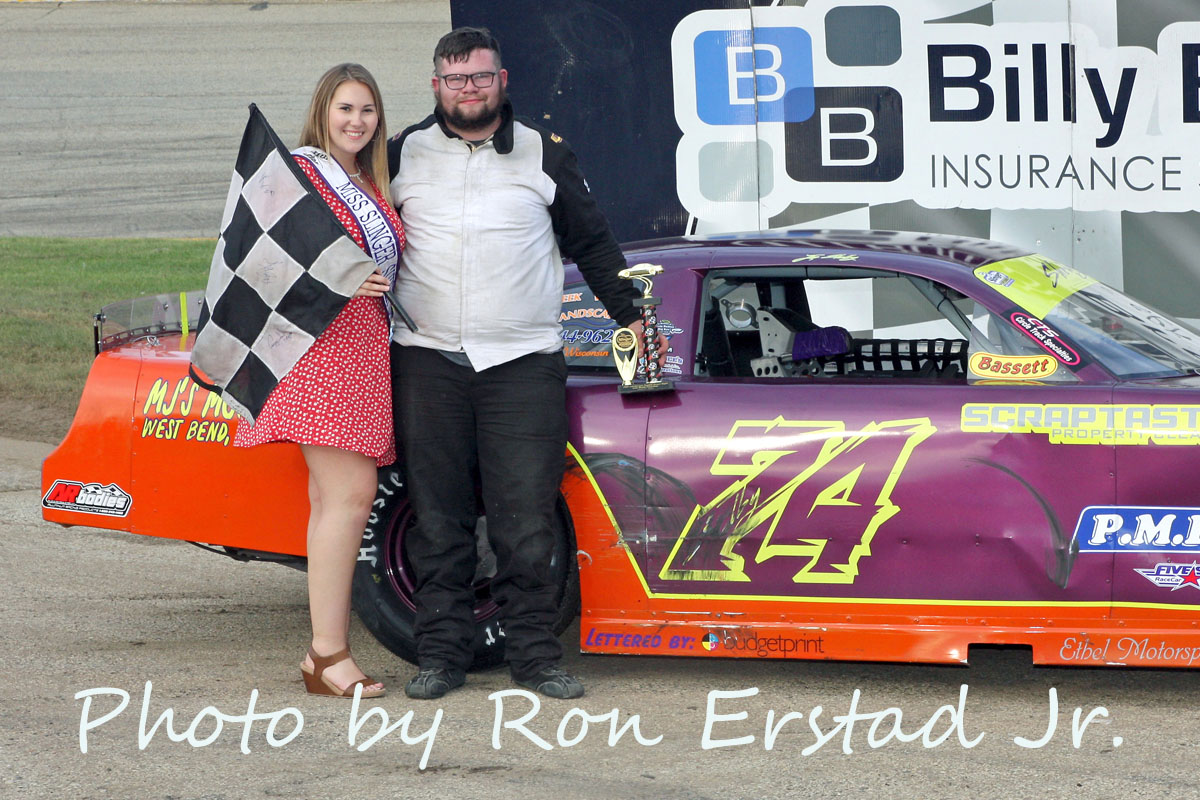 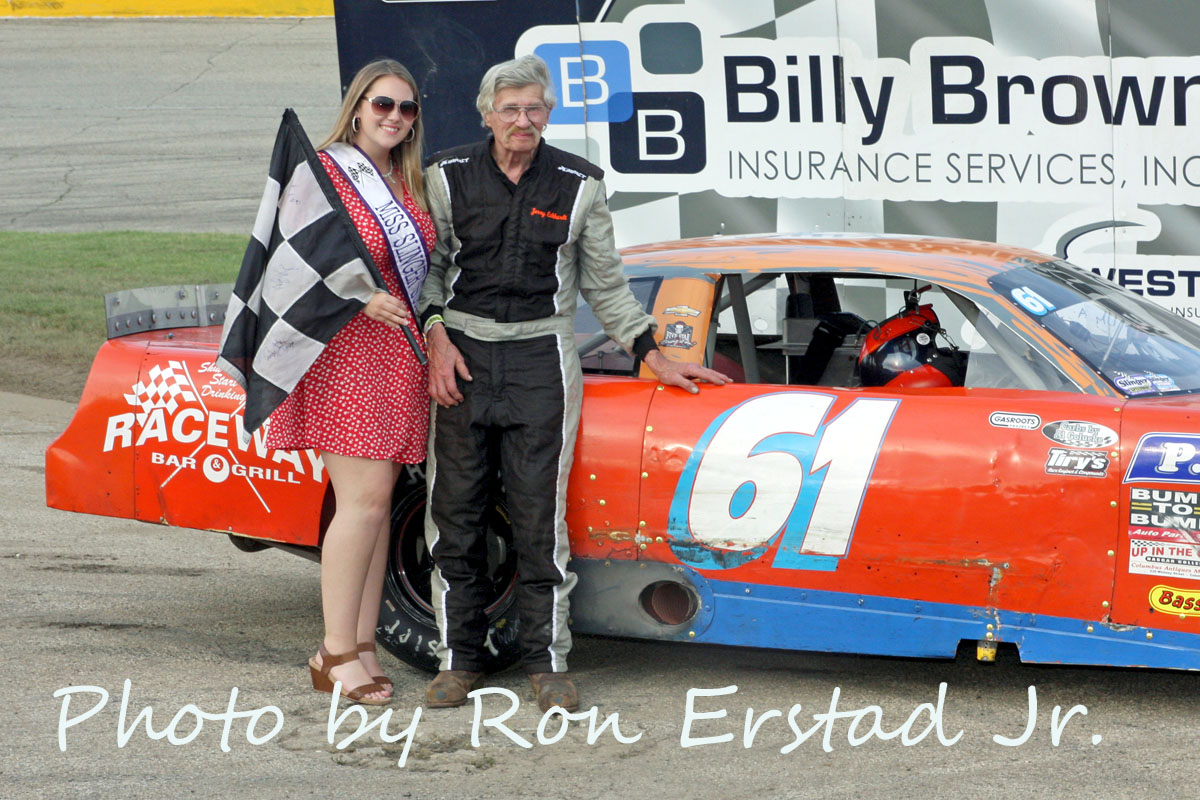 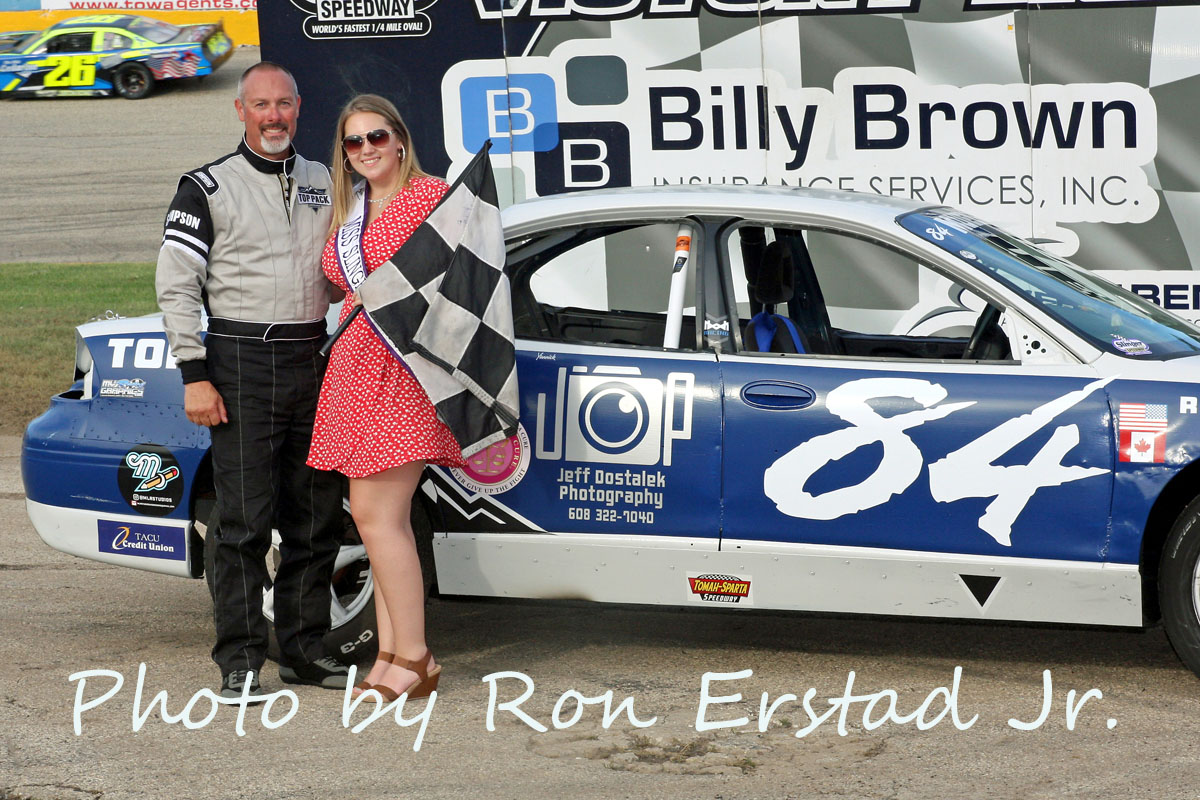 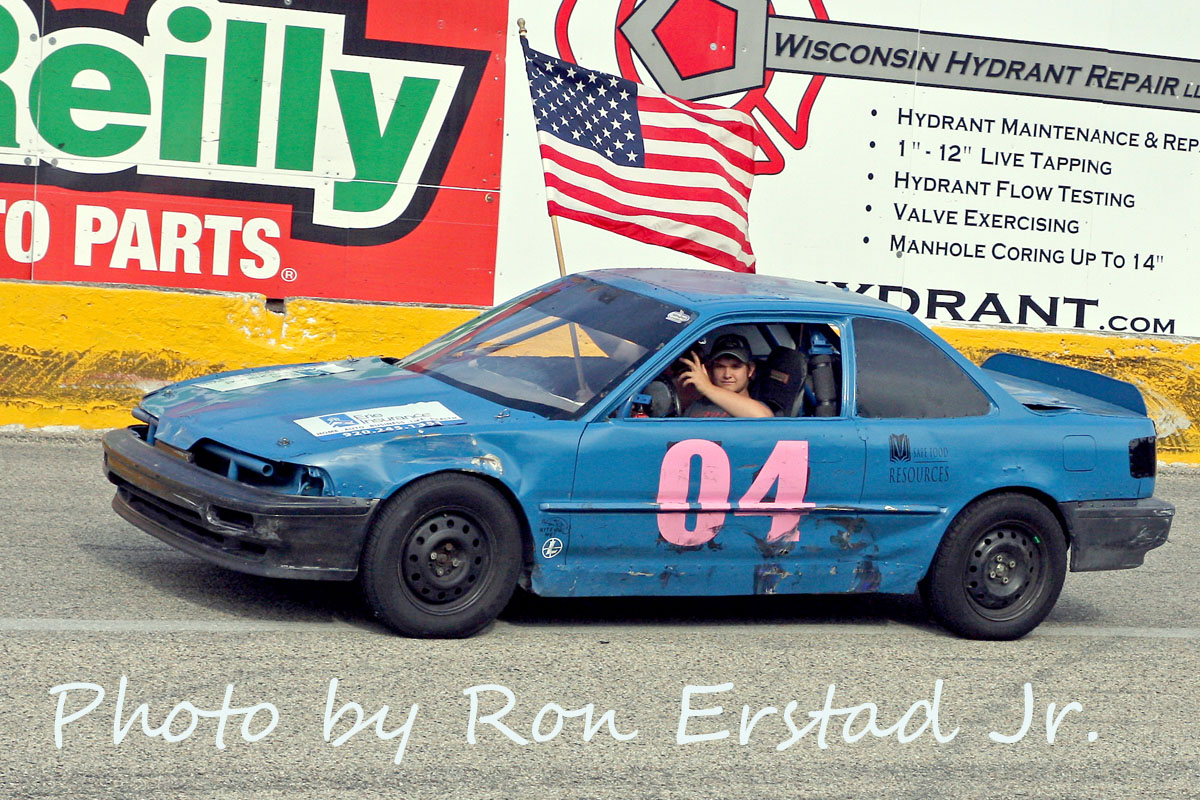 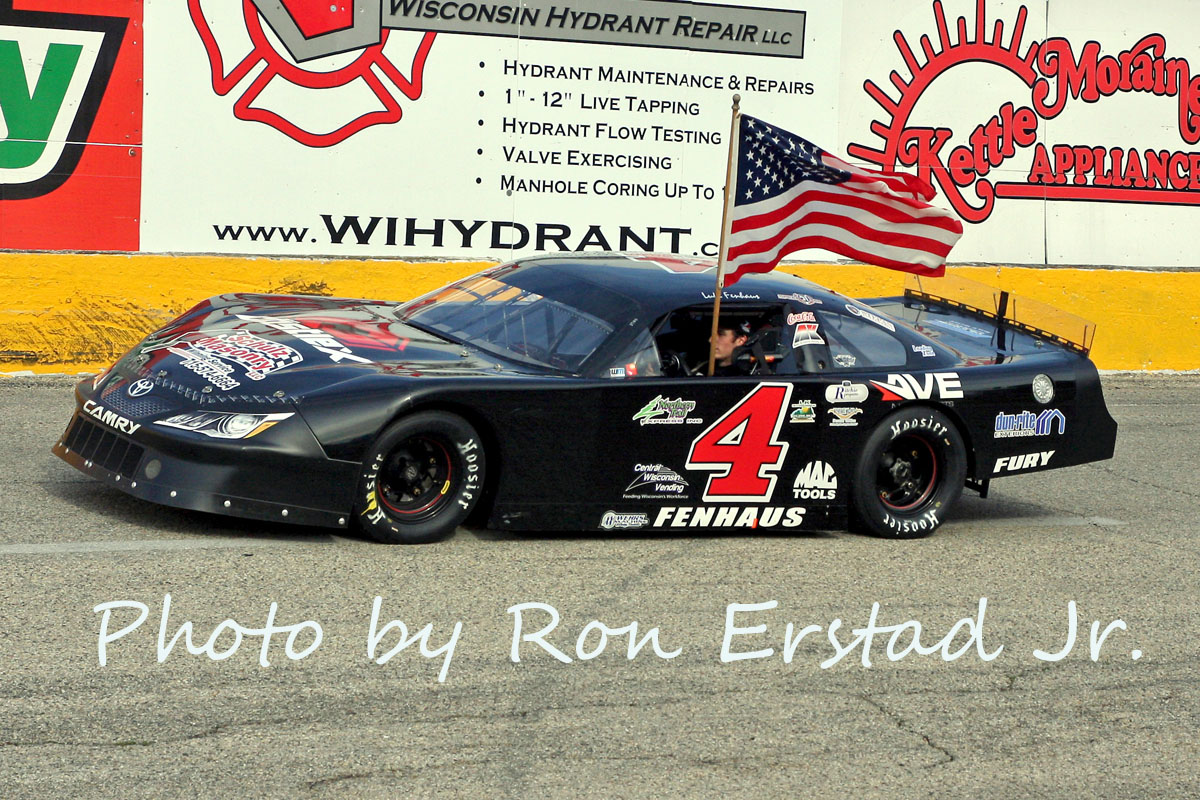 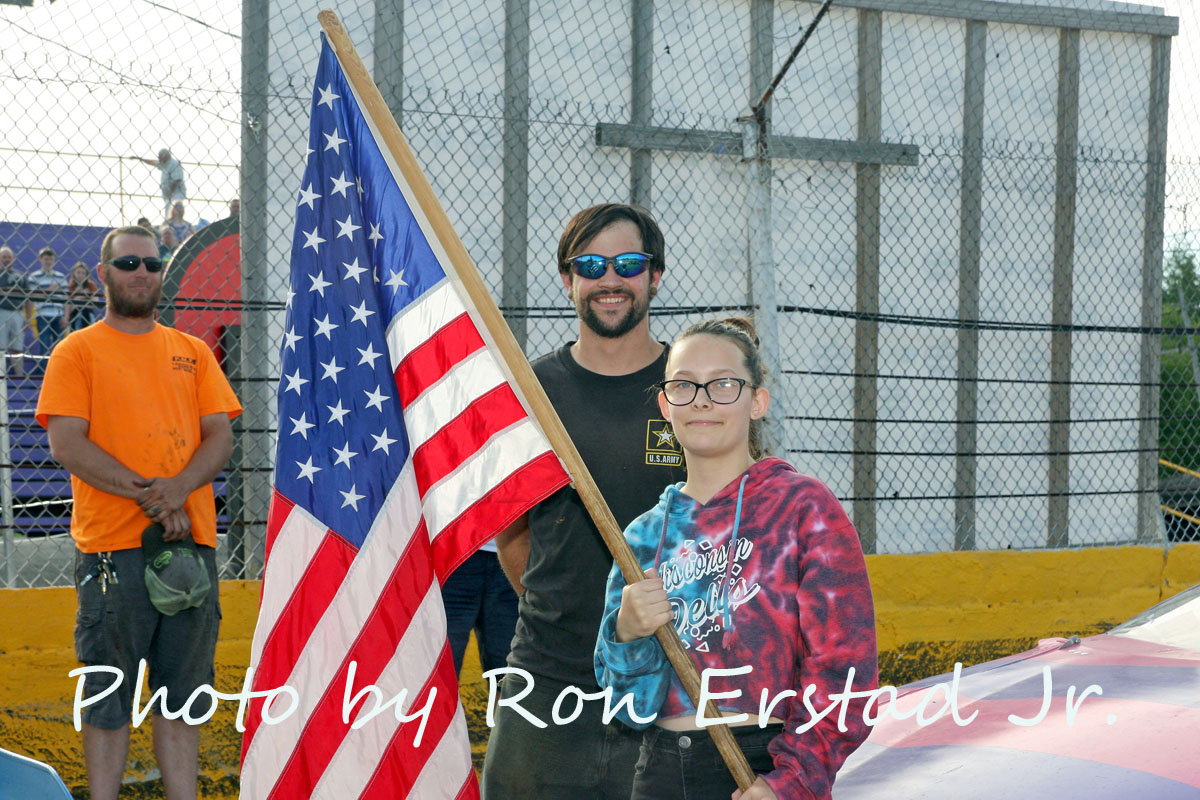