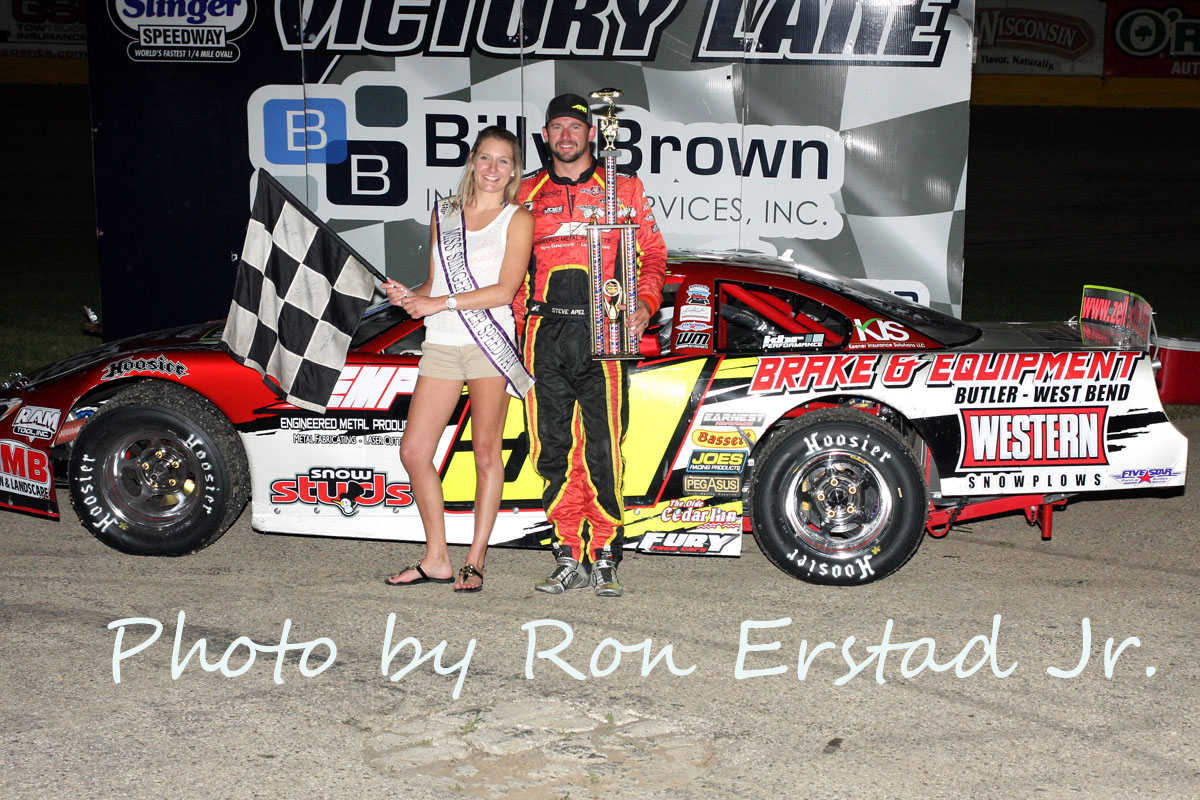 “These guys work super hard all week long and to be able to win in front of my wife, kids, and crew guys who dedicate a lot of free time to help me, if it wasn’t for them I wouldn’t be out here,” Apel told the crowd from victory lane, “It was an exciting win and that’s three out of the last four.”

Rob Braun made his first appearance of the season and took the lead at the start over Alex Prunty, Brad Keith, Mike Held, and Steve Apel. Braun turned back several serious challenges from Prunty and Keith in the early going but then his car twitched loose off turn four on lap eight and as everyone stacked up, Keith and Held’s cars spun to the infield as the caution flag waved. Braun “tapped out” and took the blame for the incident which meant Keith kept his second place position behind Alex Prunty while Held’s car sustained too much damage to continue in the race. Prunty and Keith disputed the lead as racing resumed with Apel tucked in close behind them. Prunty managed to hang onto the lead despite numerous attempts by Keith to unseat him from the inside groove. On lap 34, a slight nudge from Keith sent Prunty’s car looping around off turn four which drew the caution and placed Apel into the lead.
Prunty and Keith would battle back throughout the event to eventually finish third and fifth respectively before exchanging barbs toward one another in post-race interviews in what has the makings of a budding rivalry.

Apel continued to lead following the restart as Rich Loch, Chris Blawat, R.J. Braun, and James Swan now occupied the remaining top five positions. Loch took sole possession of second place behind Apel while Blawat and Braun raced hard over third. The top five positions remained stationary following a lap 50 caution flag that waved when the cars of Nick Wagner and Jacob Vanoskey tangled in turn four as Apel once again maintained the lead. The caution flag flew once again just three laps after the restart as Blawat’s car kicked sideways and made contact with Braun’s machine while battling for third and looping both cars around in turn two. Blawat “tapped out” at the start/finish line signaling he took the blame for the incident which allowed Braun to keep his third place behind Apel and Loch. Another quick caution for a single car spin on lap 63 slowed the closing laps briefly but no one really had anything for Apel as he remained out front. Alex Prunty and Brad Keith charged forward from their earlier incident with Prunty advancing all the way to third just behind Braun who was able to wrestle the position from Loch a few laps earlier. Apel cruised to the victory while Prunty and Braun staged a side by side battle for second that concluded with Braun taking the spot by inches for his best career finish while Prunty settled for third despite spinning just after taking the checkered flag. Rich Loch finished fourth while Brad Keith was fifth. Lowell Bennett finished sixth while Jacob Gille and James Swan were seventh and eight respectively. Rob Braun and Nick Wagner rounded out the top ten finishers.

Jay Kalbus won the 35-lap sportsman feature in a fender banging side by side finish with Ryan Gutknecht. Jacob Schraufnagle finished third while Andrew Meyerhofer and Rick Corso were fourth and fifth respectively. Rick Corso won a sportsman heat race while Jay Kalbus completed the clean sweep on the evening by not only winning the feature race but also his heat race and setting fast time at 12.657 seconds.

Brady Held passed Misty Benn in traffic with two laps to go to win the 25-lap Slinger bees main event. Benn finished a close second to complete one of her best races to date while Brandon Tackes finished third. Paul Reagles and Brandon Mennicke rounded out the top five. Slinger bees heat races were won by Tom Elsinger Jr. and Ricky Gebhard while Marty Tackes was the fastest qualifier at 15.209 seconds.

Dave Meyerhofer drove the SideTracked entry in the bar cars event to its first victory of the season and Carl Trapp bested a strong field of spectator racers in his Corvette to claim top honors in that division. Nick Ostberg edged Ryan Lovald in a photo finish to win the Figure 8 race and Rachel Taylor was crowned Miss Slinger Speedway for the 2020 season. 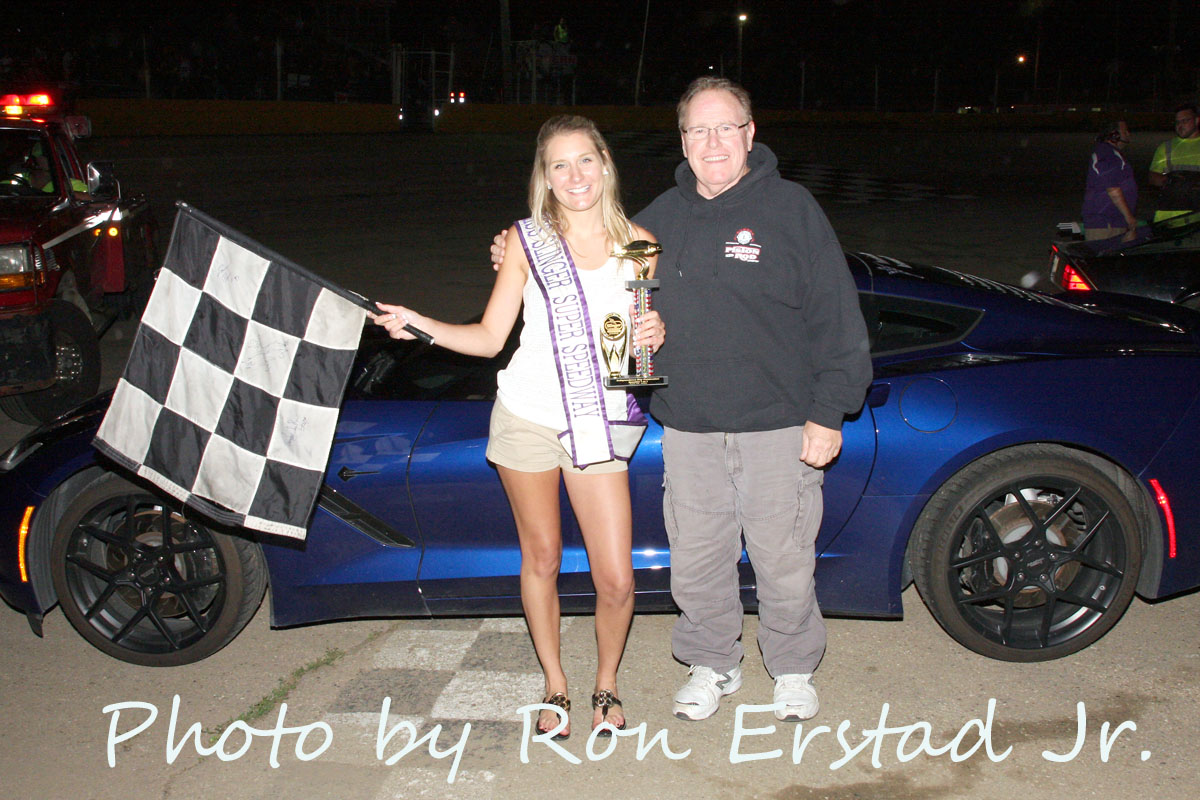 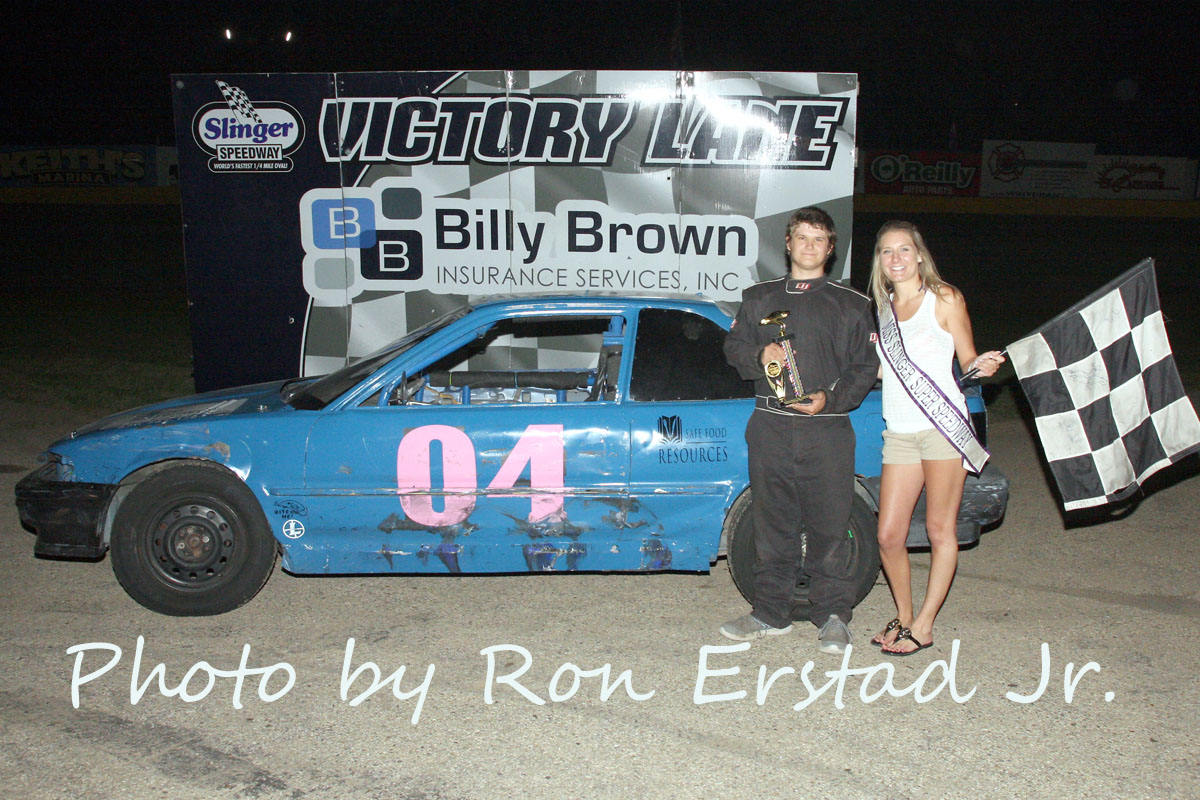 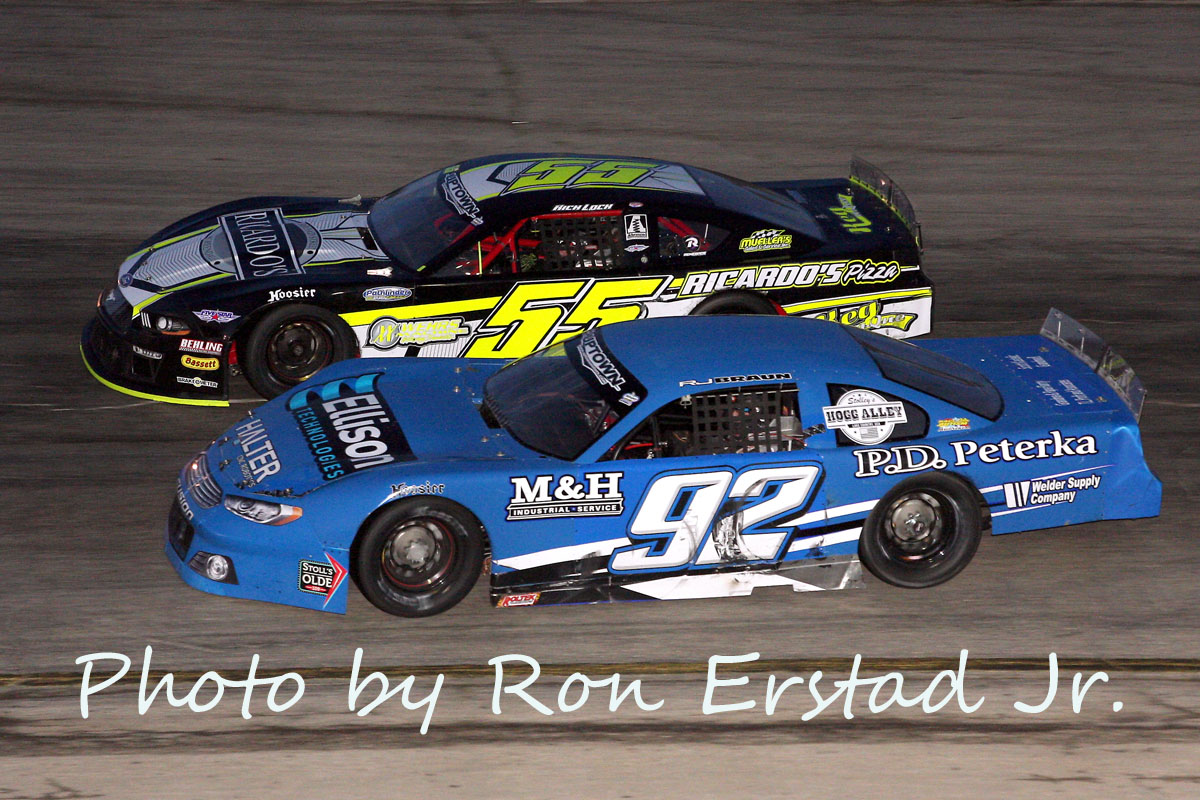 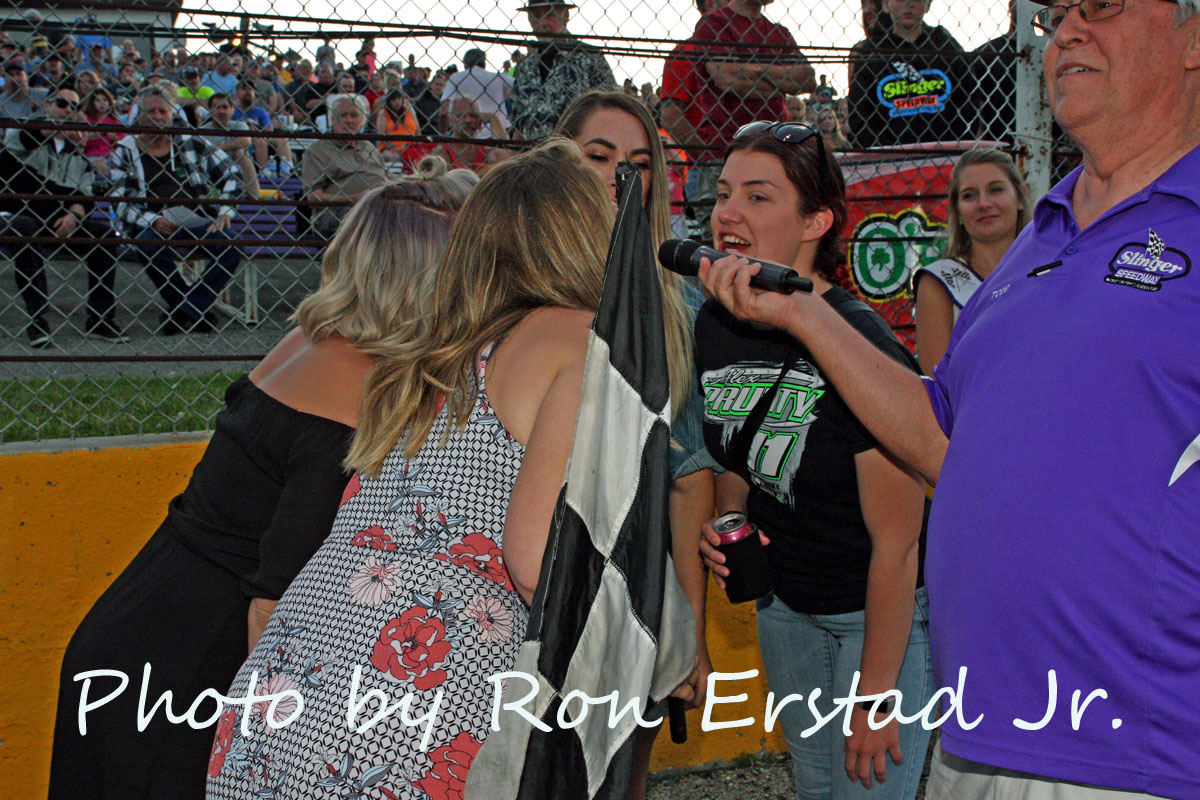 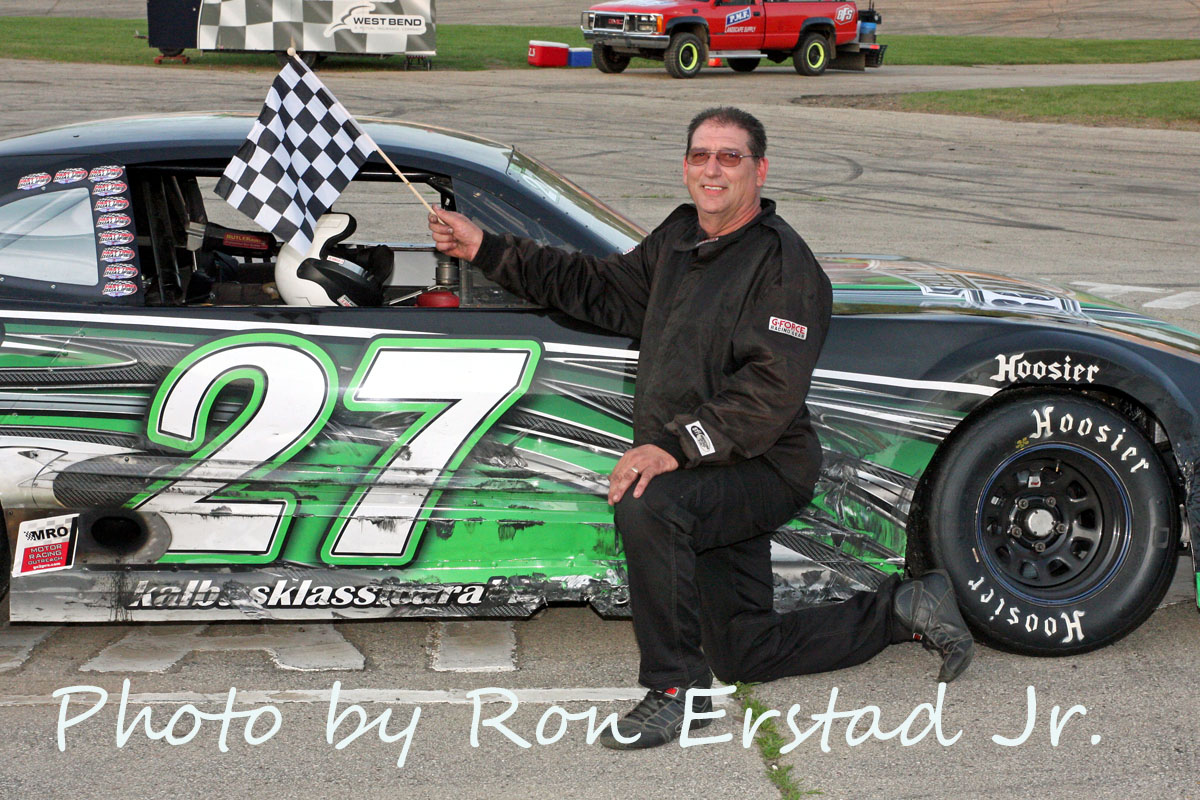 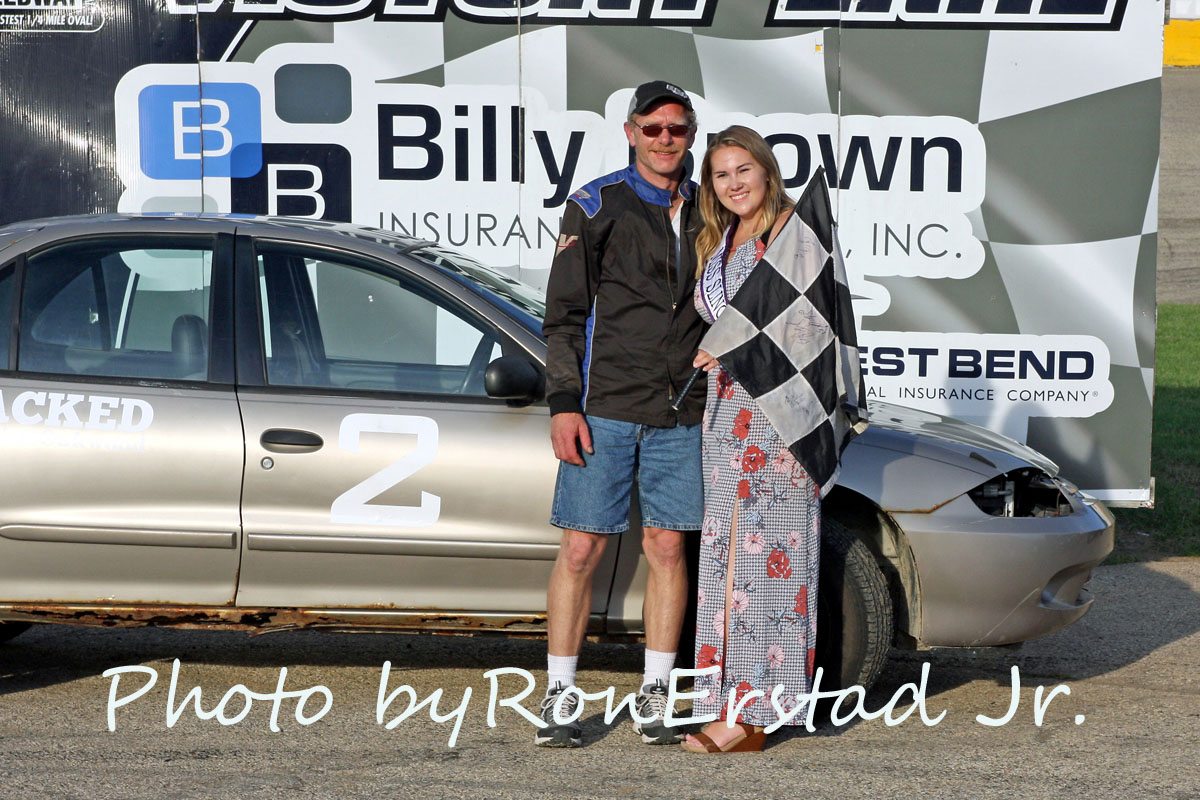 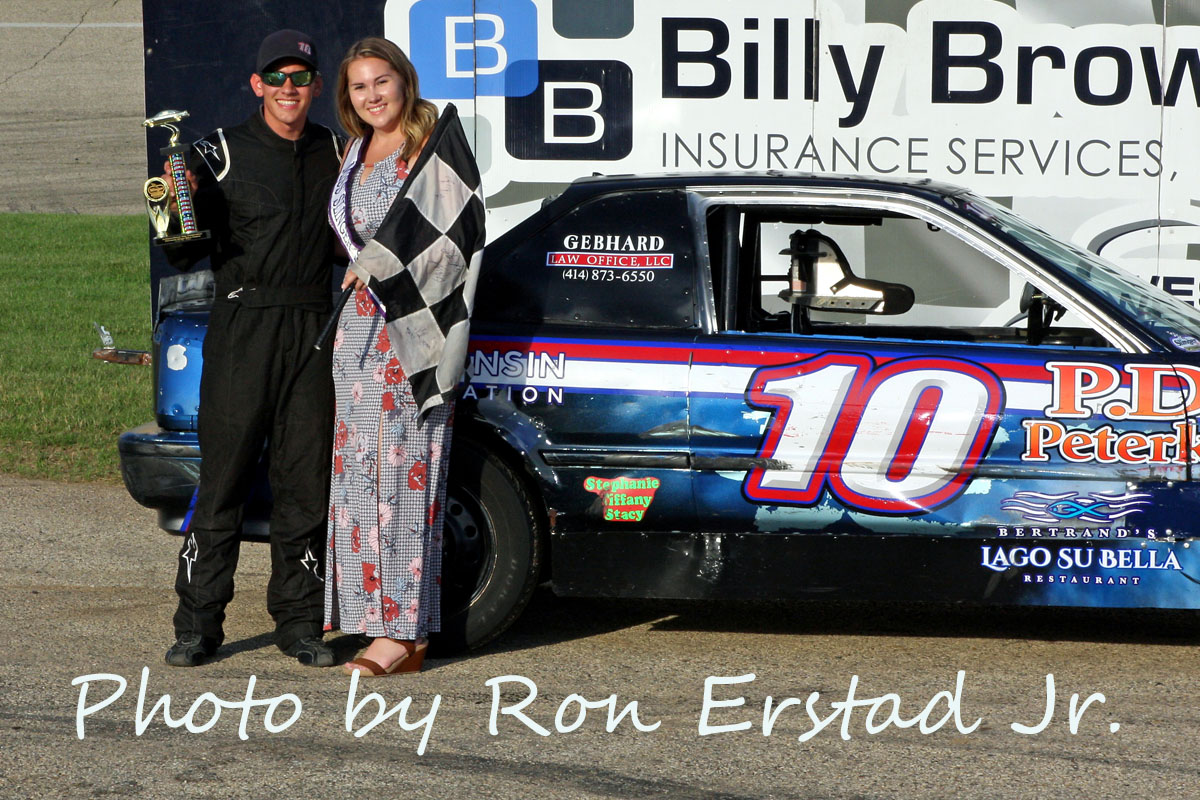 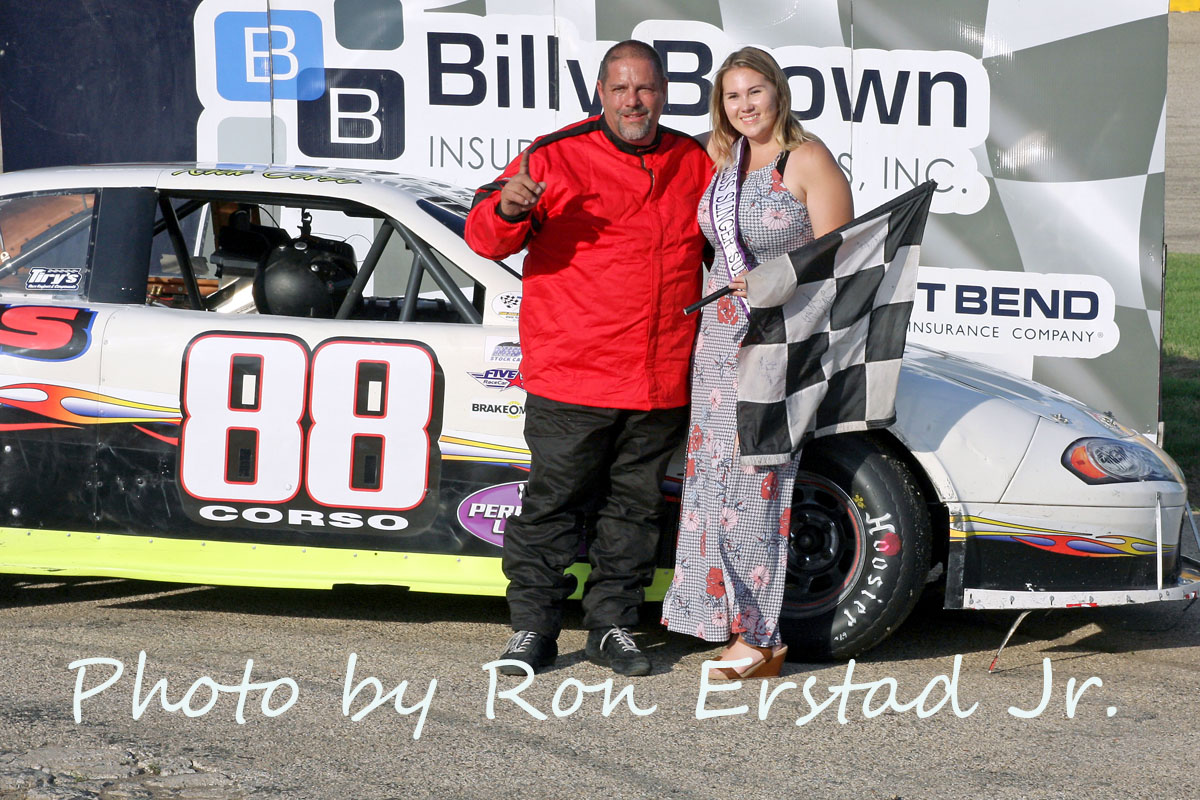 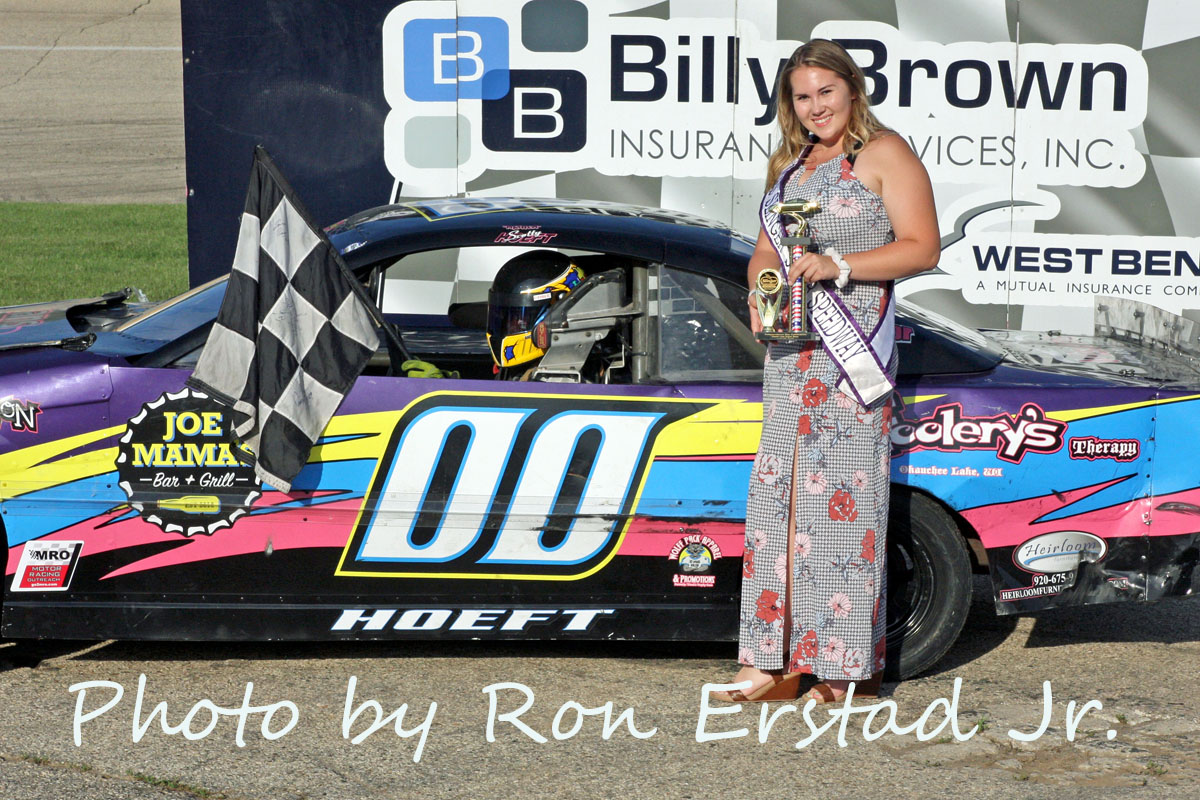 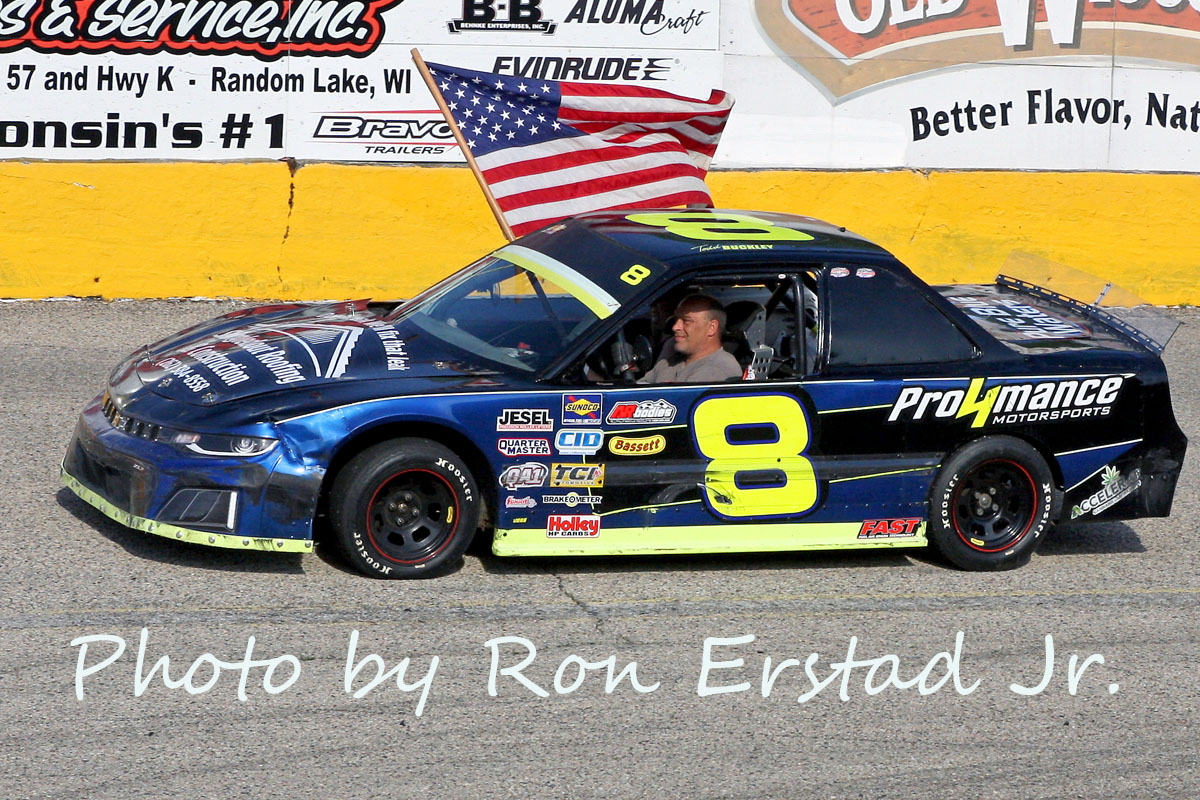 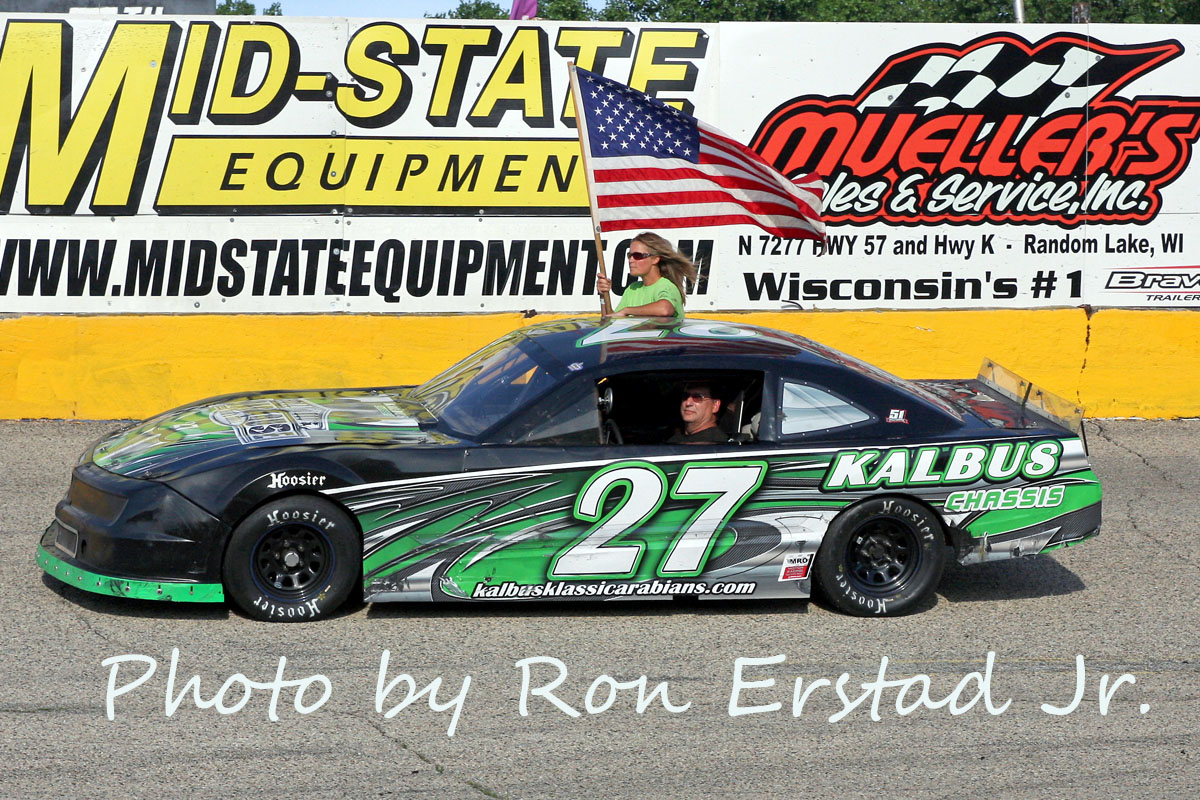 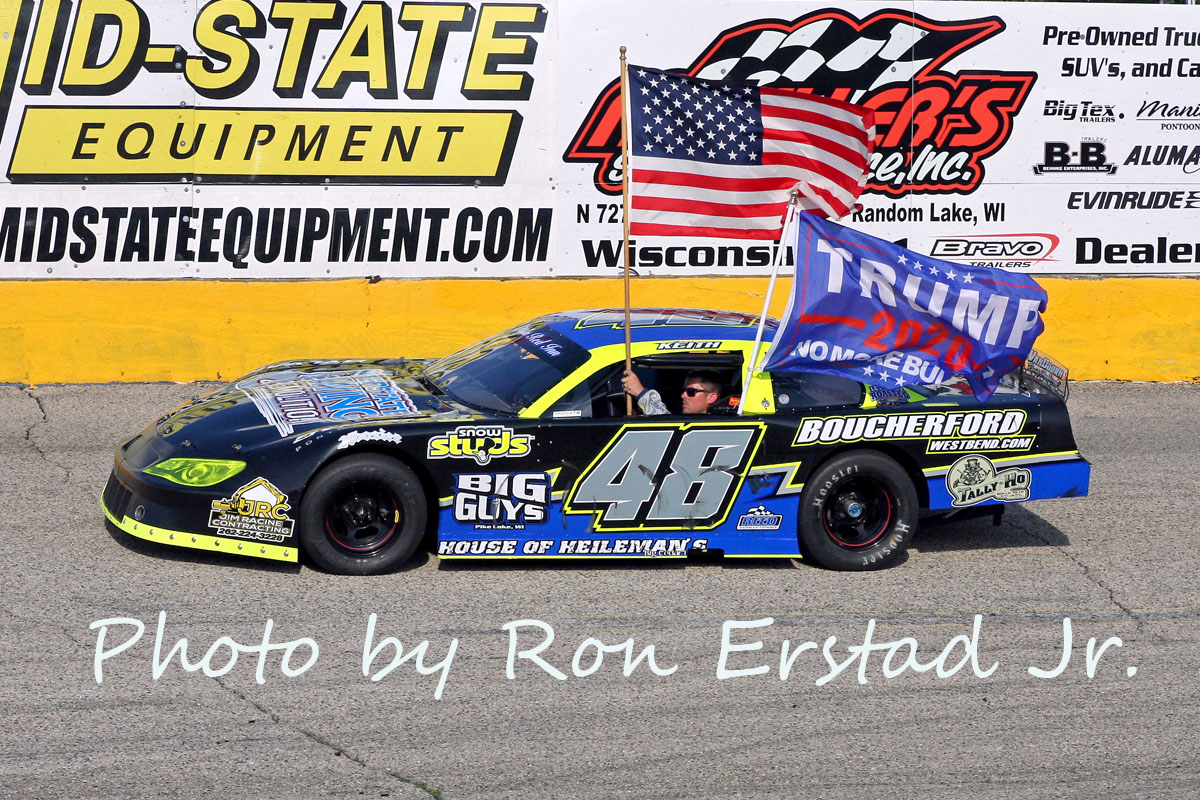 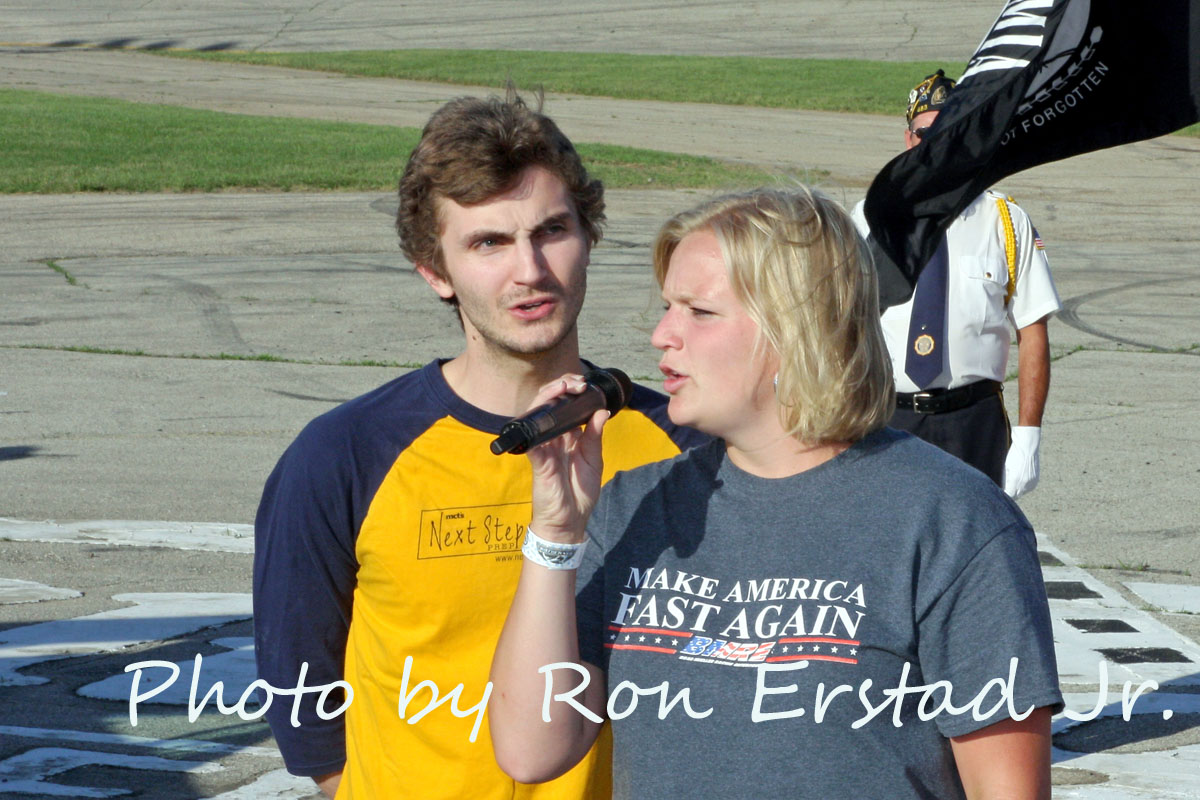