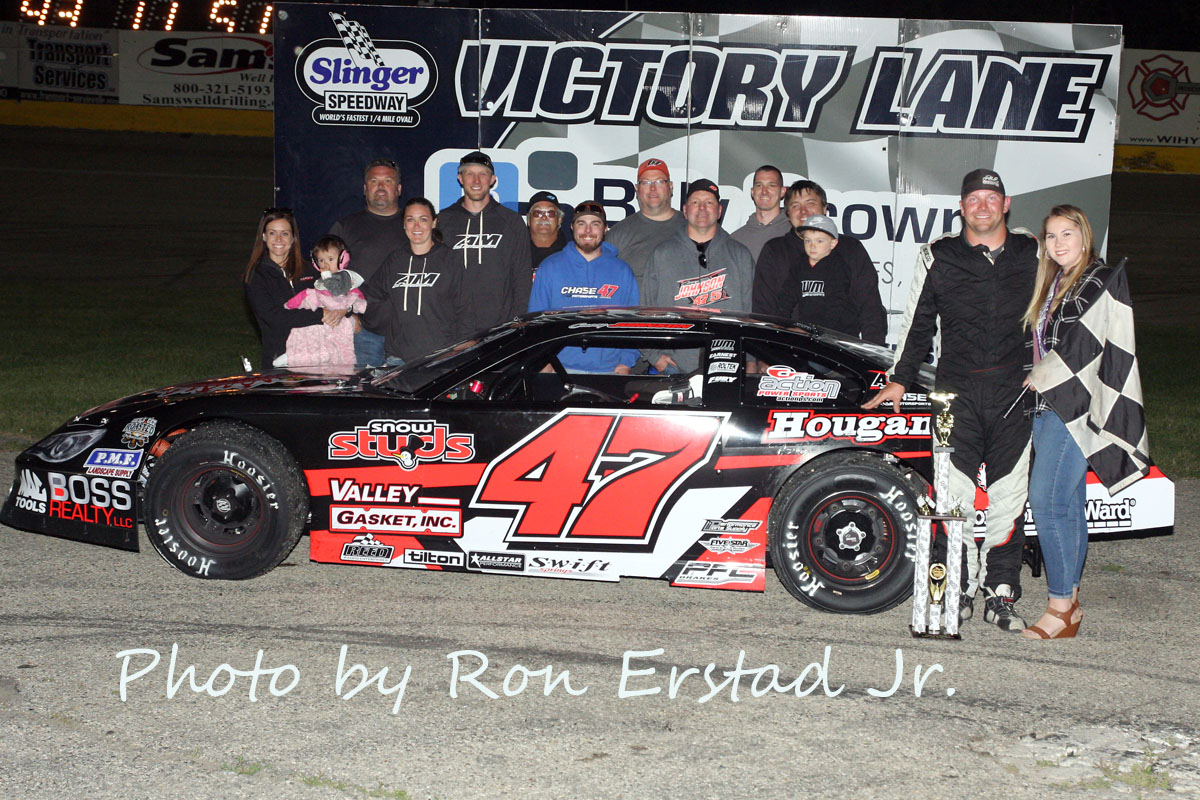 “We just got this car done this morning and it was real fast right out of the gate, “Johnson told the crowd from victory lane, “for the first race on a brand new race car, you can’t get much better than that.”

“The outside lane just had so much overall grip and I felt comfortable running with Alex (Prunty) and I knew he was going to run me clean,” Johnson continued explaining his choice to use the top groove of the speedway through several late race restarts, “it was a lot of fun and feels great to finally get the super late model win out of the way here at Slinger.”

“The bottom just wasn’t the place to be tonight and you just had to do what you had to do,” Alex Prunty stated after challenging Johnson for the lead before surviving an intense battle with Steve Apel to finish second, “all in all though it’s a good second place finish and a great start to the year.”

Rich Loch and Dennis Prunty led the field to the green flag as a skirmish deeper in the field quickly put the race under caution as Nick Wagner’s car sat sideways in turn one while the machine of Chris Blawat left the track with damage. On the restart, Loch and Dennis Prunty battled door to door for the lead while Alex Prunty held down third just head of Casey Johnson, Brad Keith, and Steve Apel. Loch eventually grabbed the lead over Dennis Prunty as the race began to sort itself out with Alex Prunty edging ahead of Johnson and Apel with Keith in the mix as well in sixth place. With Loch continuing to show the way over Dennis Prunty, the action heated up for third as Johnson and Alex Prunty disputed the position side by side for several laps. Johnson eventually prevailed and moved into third as Alex Prunty began to be challenged by Steve Apel over fourth, Prunty momentarily cleared Apel for the position but the momentum needed to slip in front of Apel coupled with the sudden slowing necessary to avoid running into Johnson’s rear bumper, twitched Prunty’s car sideways which allowed Apel to once again challenge on the inside. By the time Alex Prunty was able to use the outside lane to retake the fourth position from Apel, Johnson had driven away and caught Loch and Dennis Prunty at the front of the field. Those three ran nose-to-tail for several laps before Johnson was able to nudge his way to the inside of Prunty for second after Prunty’s car swung loose off the fourth turn. The dicing for second allowed Alex Prunty, Steve Apel, and Brad Keith to all join the front runners and the top six raced in single formation with Loch continuing to lead. As Johnson began to challenge Loch for the lead, Alex Prunty muscled Dennis Prunty out of the way for the third spot. Johnson was able to edge to the inside lane and move alongside Loch for the lead and after several side by side laps, he was able to take command of the race as Alex Prunty also moved around Loch to take over second. Dennis Prunty, Steve Apel, and Brad Keith reeled in Loch for the third spot and as they raced bumper to bumper, Apel began to pressure Prunty hard for the fourth spot while the leaders began to encounter lapped traffic. Just as Apel moved alongside Dennis Prunty, the caution waved on lap 63 as Jeff Holmgren’s car sat sideways in turn one. Johnson chose the outside lane on the restart and was able to keep Alex Prunty at bay for the lead as Apel and Loch raced in there tire tracks but behind them, Dennis Prunty and Brad Keith rubbed fenders over fifth and then tangled in turn two a half lap later to draw another caution flag. Once again Johnson was able to fend off Alex Prunty as racing resumed and once again the caution waved two laps later when Dennis Prunty’s car suffered a flat tire and stopped in turn four. For a third time, Johnson used the outside lane to fend off Alex Prunty on the restart as Apel sat ready to pounce for second just ahead of Mike Held and Rich Loch. Johnson began to edge away out front in the closing laps as Apel and Prunty raced hard over second. Apel briefly took the spot before Prunty charged back from the inside to regain the position as Johnson continued to pull away. Johnson drove to the victory over Prunty and Apel while Mike Held and Rich Loch rounded out the top five. Brad Mueller finished sixth ahead of Lowell Bennett and R.J. Braun while Brad Keith and Gabe Sommers completed the top ten finishers.

Dennis Prunty won the super late model fast dash and Casey Johnson blistered the speedway in 11.175 seconds to nail down fast time honors on the evening.

While Nick Egan led all 40 laps of the late model main event on his way to victory, it definitely wasn’t easy as he fended off numerous challenges from defending track champion Jacob Nottestad. Nottestad had to settle for second place at the checkered flag while Jack Stern finished third. Ryan Gutkencht crossed the finish line in fourth place while Max Kahler finished fifth.

Brian Vixmer won the 25-lap Wisconsin sport truck feature over J.J. Vanderloop and Kasey Vanderloop. Jason Van Handel finished fourth and Andrew Ross was fifth. Jerry Vanderloop provided some excitement early in the race when his truck spun and rolled over on the frontstretch in an incident in which his truck’s body became separated from the chassis. He was not seriously injured in the incident but in the scramble to slow down under the red flag, another truck spun and backed into the speedway pace car causing minor damage. Wisconsin sport truck heat races were won by J.J. Vanderloop and Brian Vixmer and Vixmer was also the fastest qualifier with a lap at 13.639 seconds.

Brian Hillringhouse won the Bar Cars race driving the Slippery Rail of Allenton entry and Nick Ostberg was the winner of the Figure 8 race over Ryan Lovald and Carl Benn. Bill Shavlik and Rick Bruskiewicz rounded out the top five in the Figure 8 event as the evening was completed before 10:00 pm. 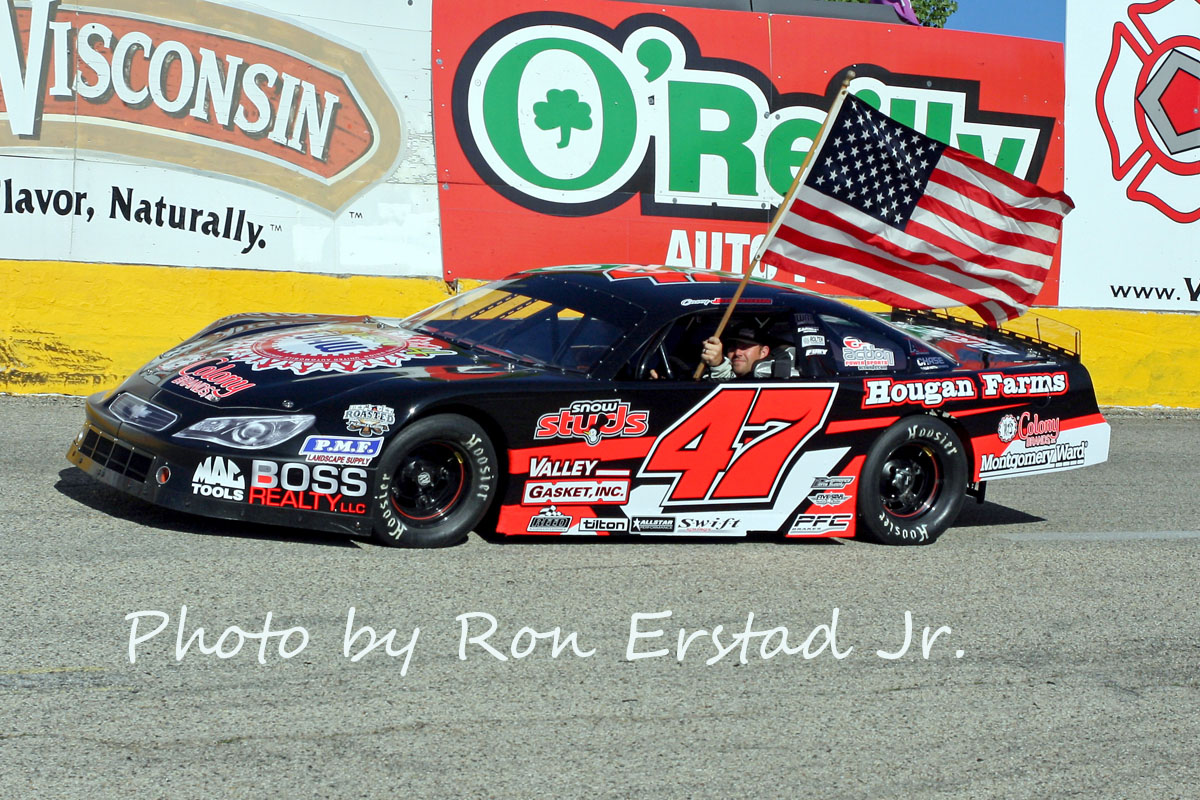 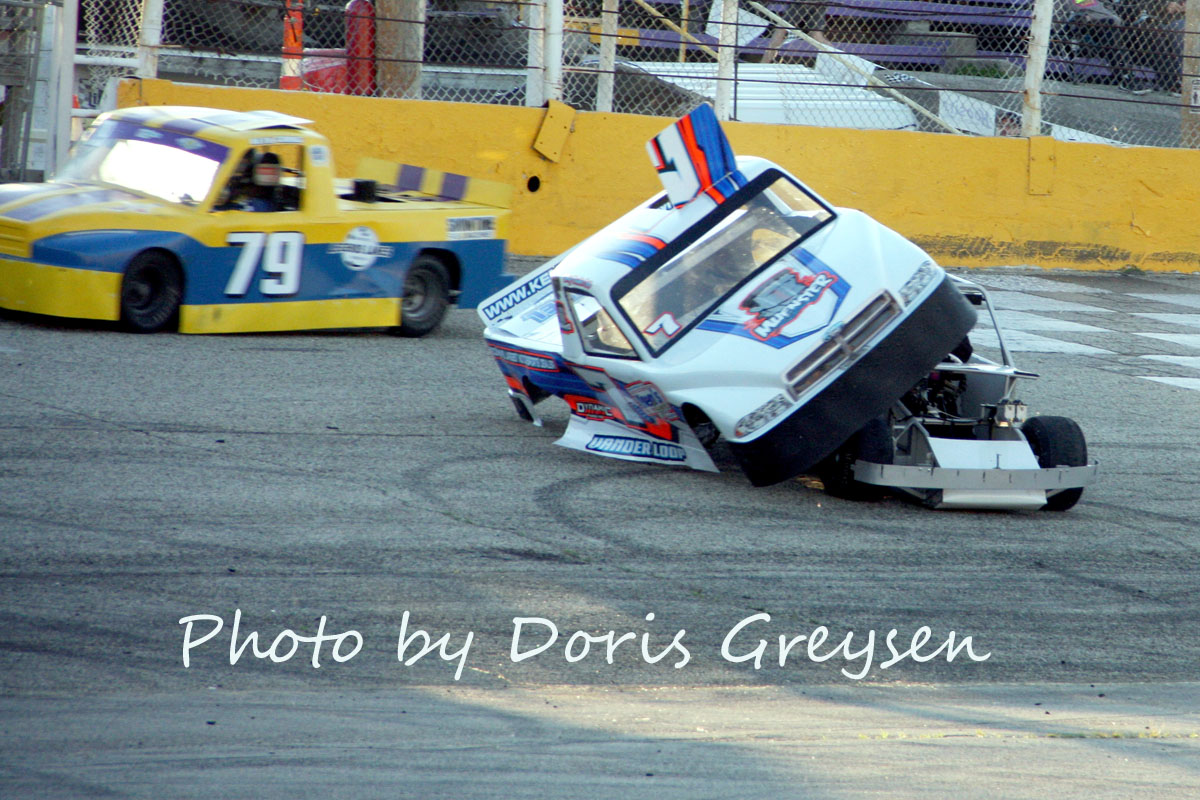 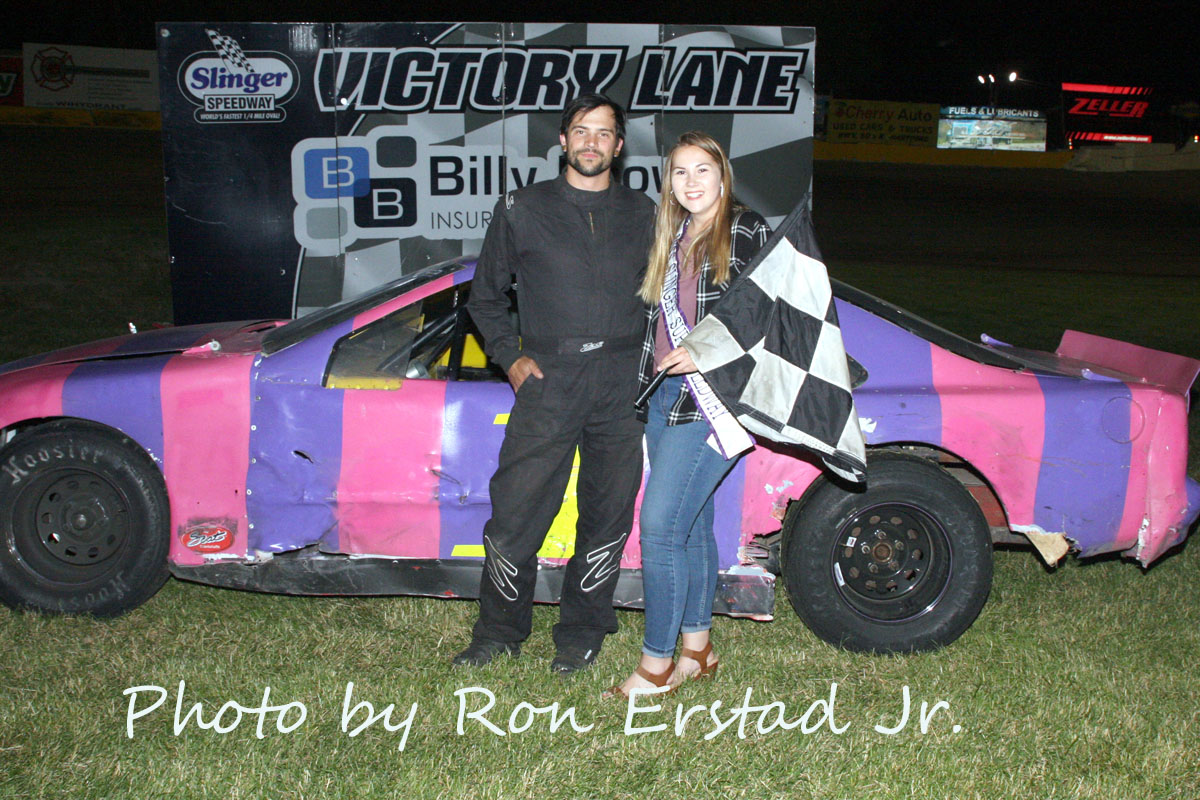 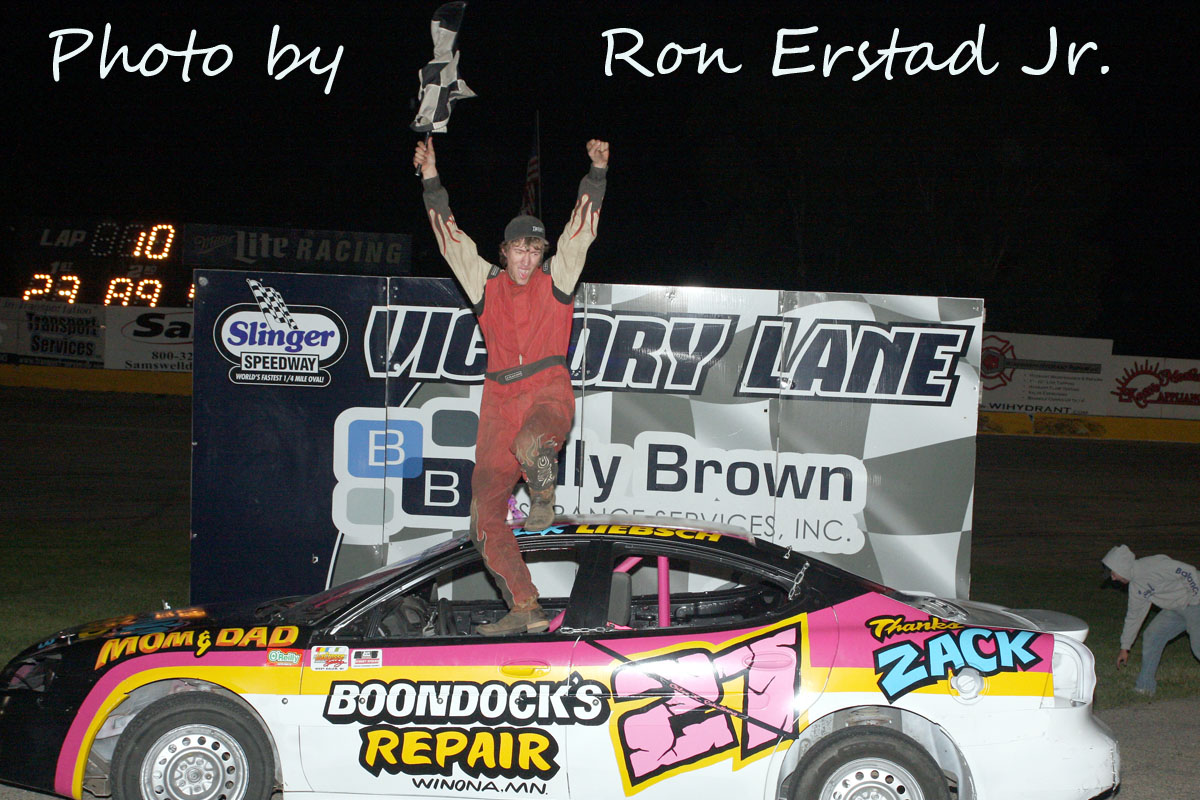 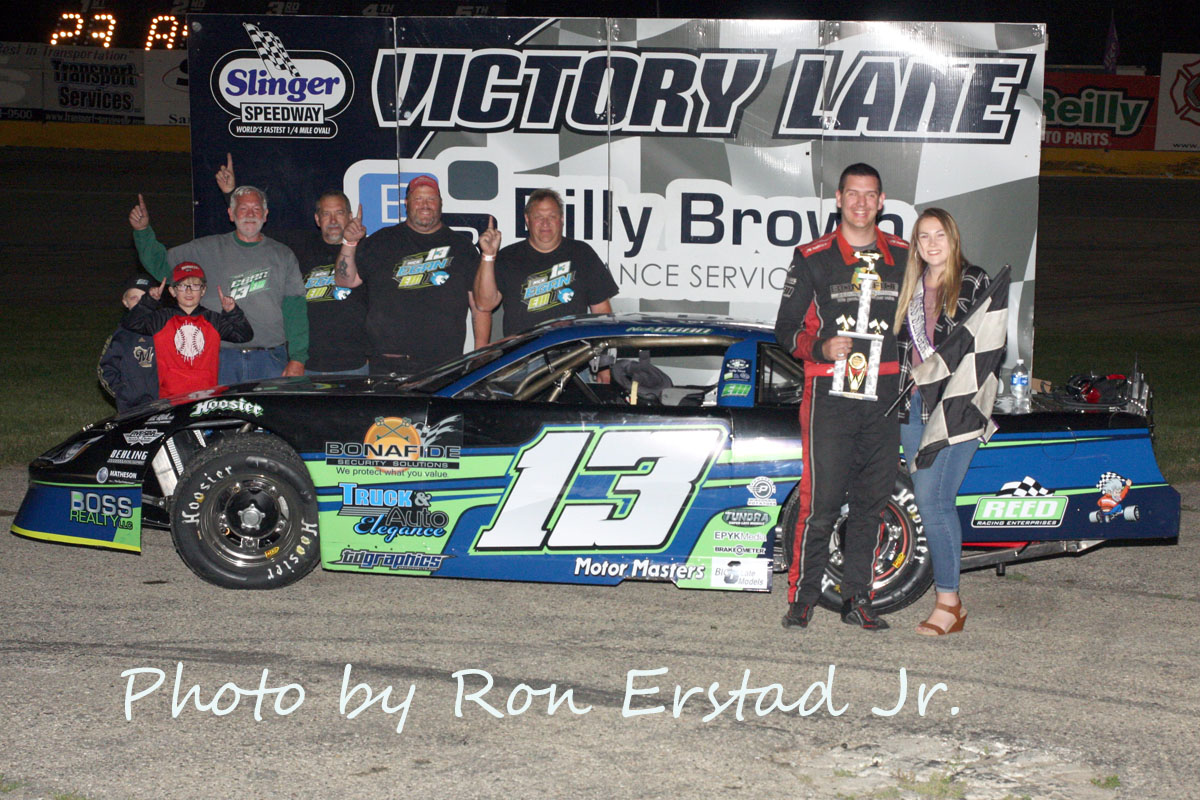 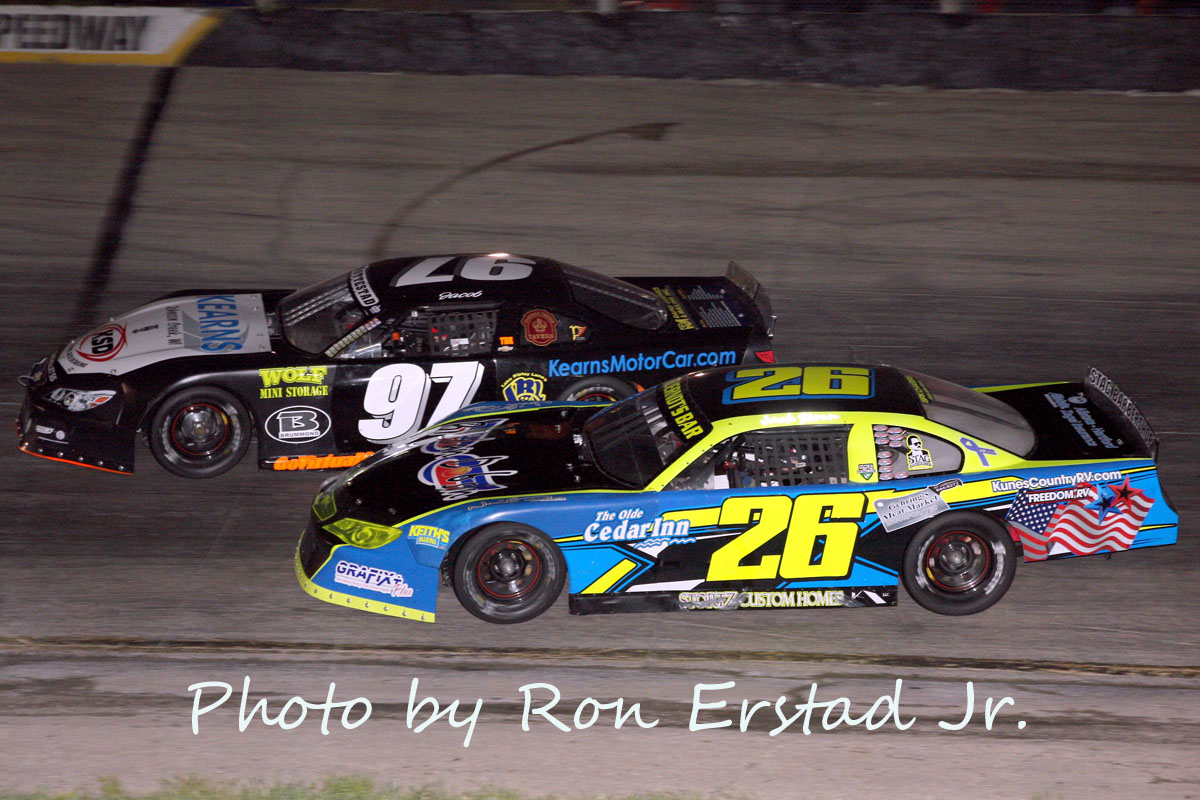 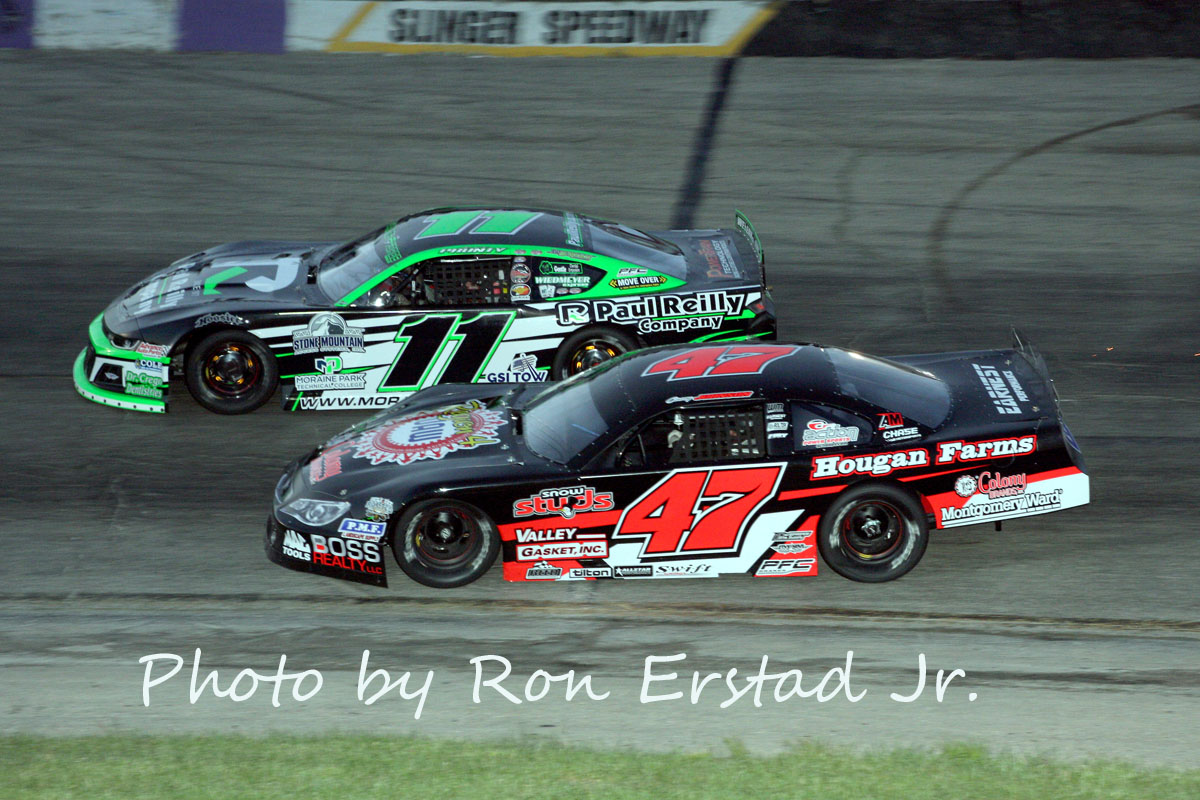 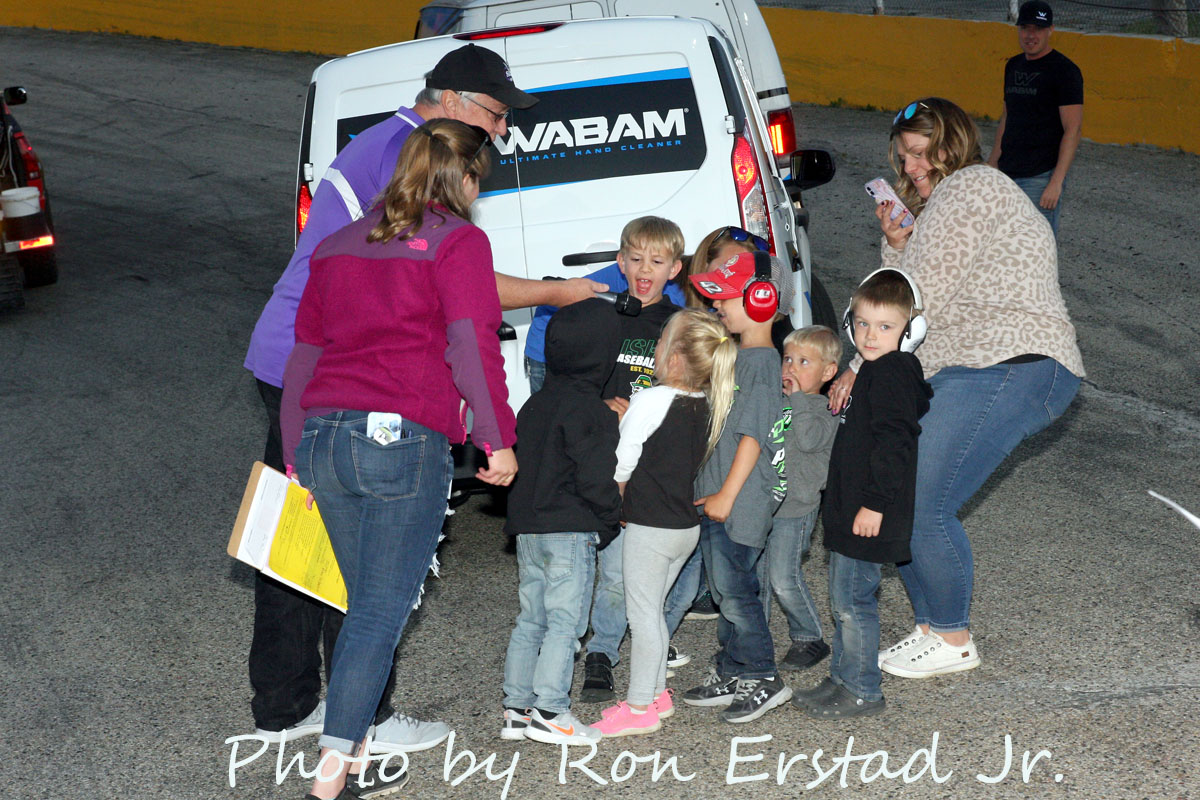 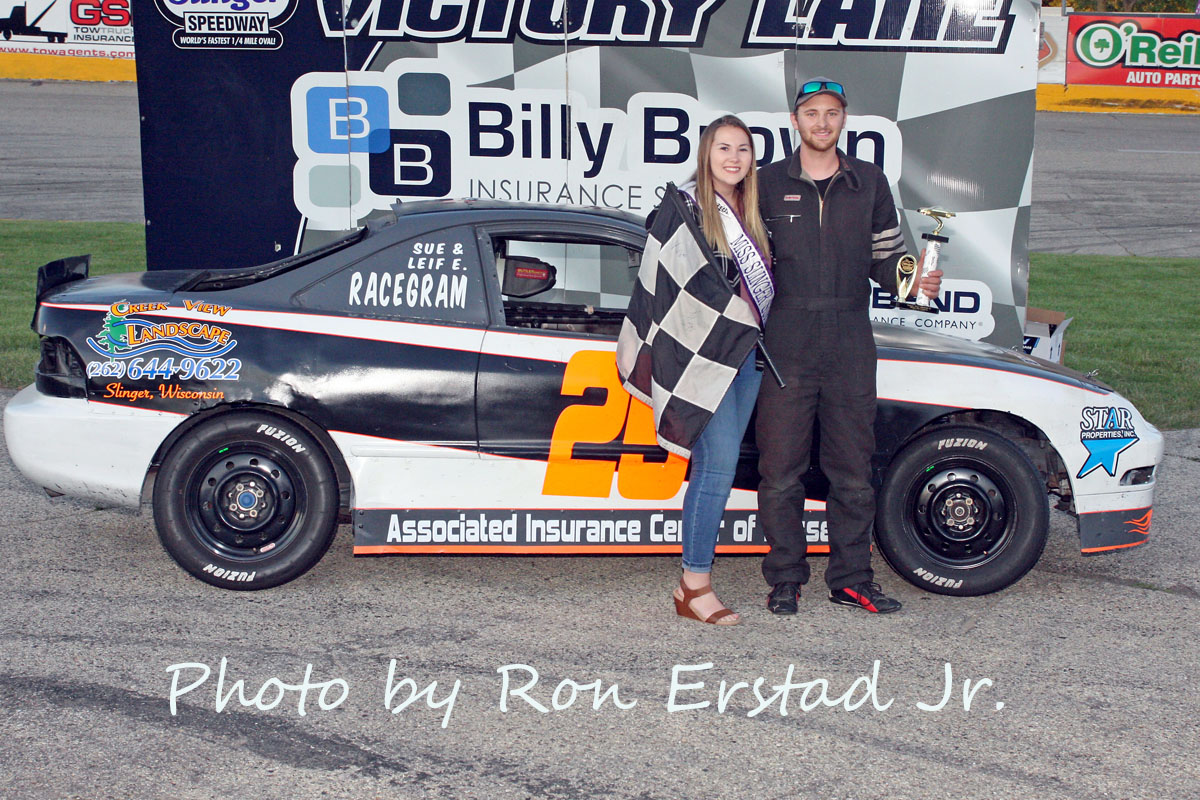 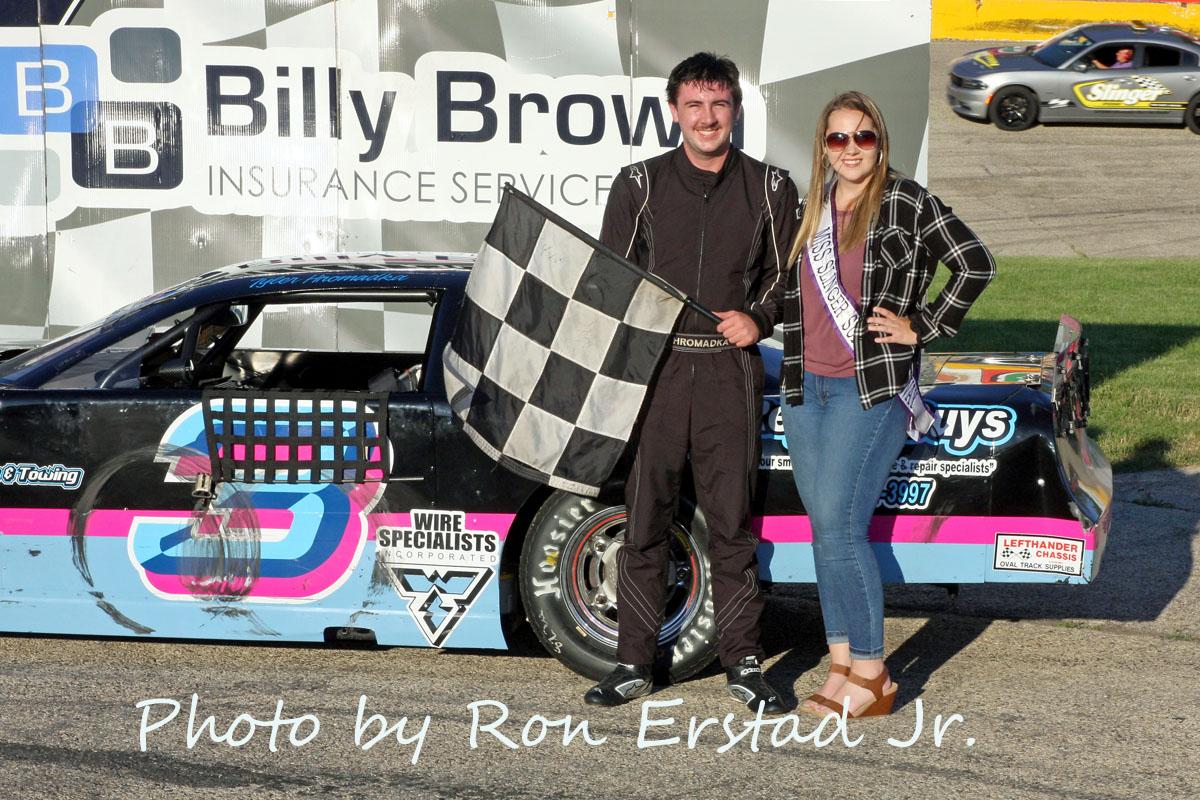 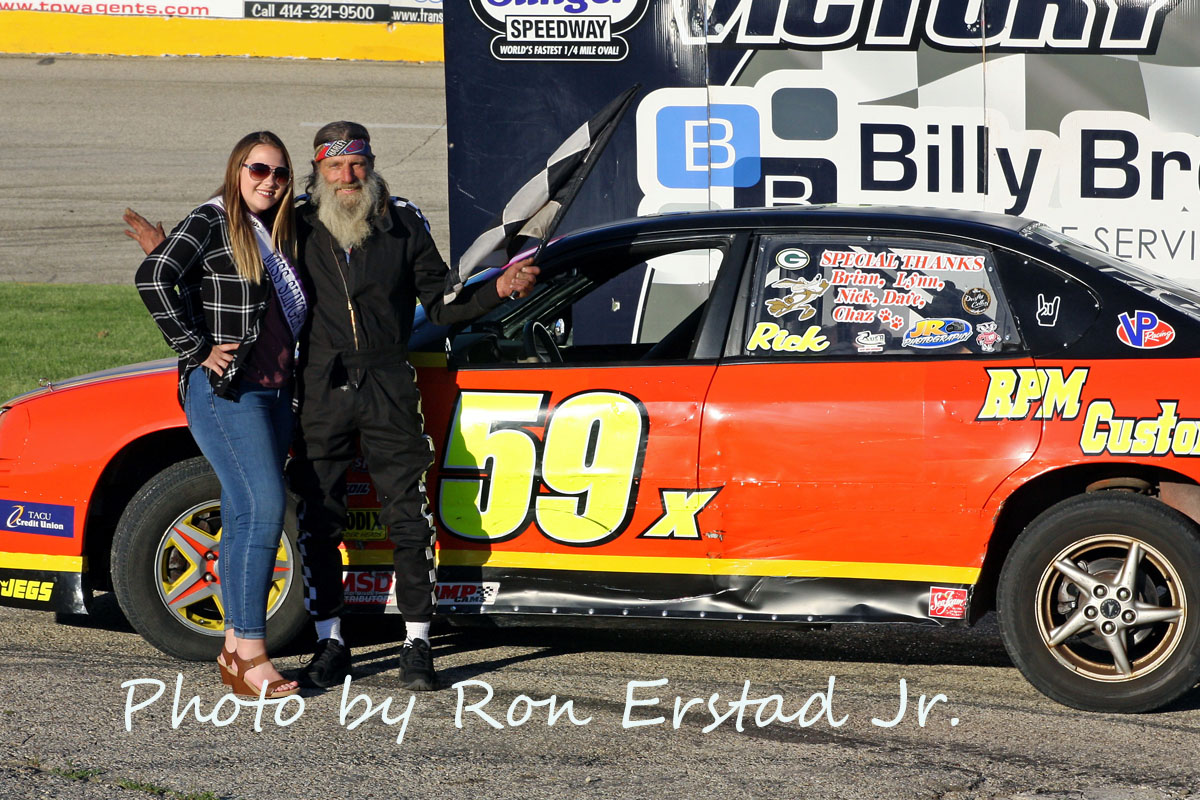 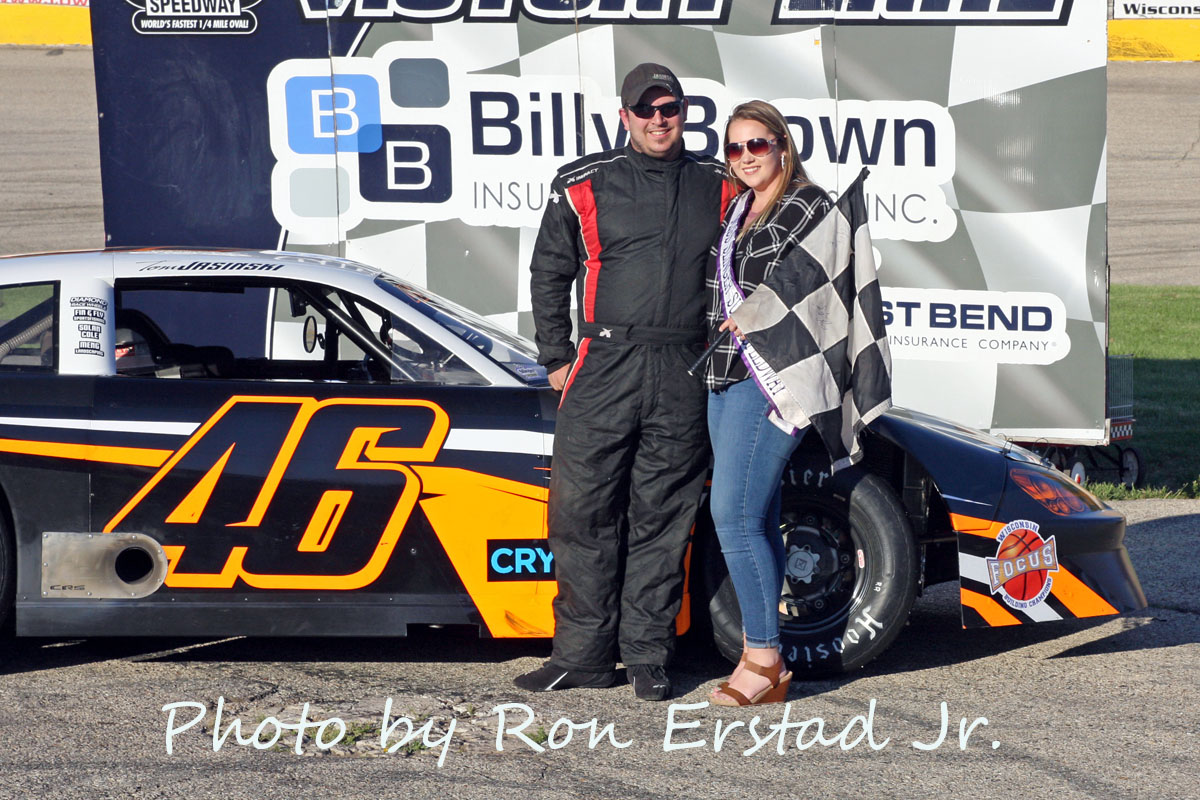 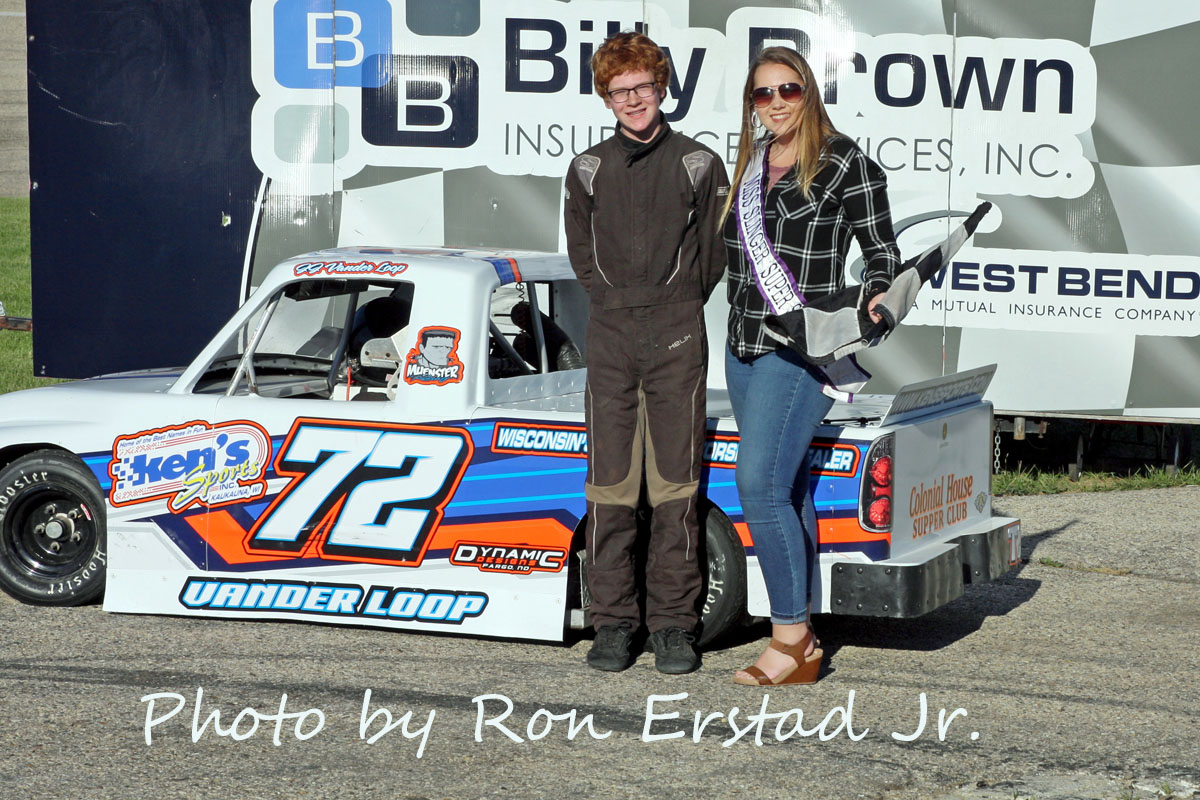 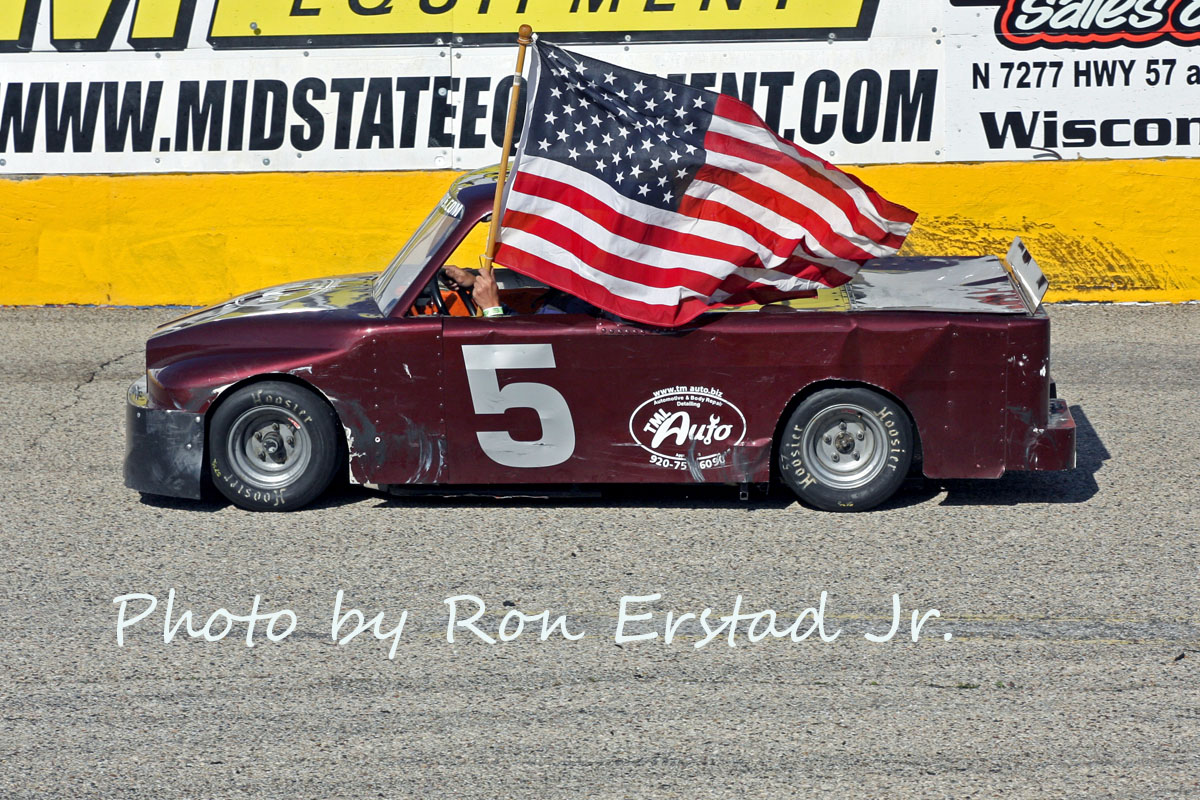 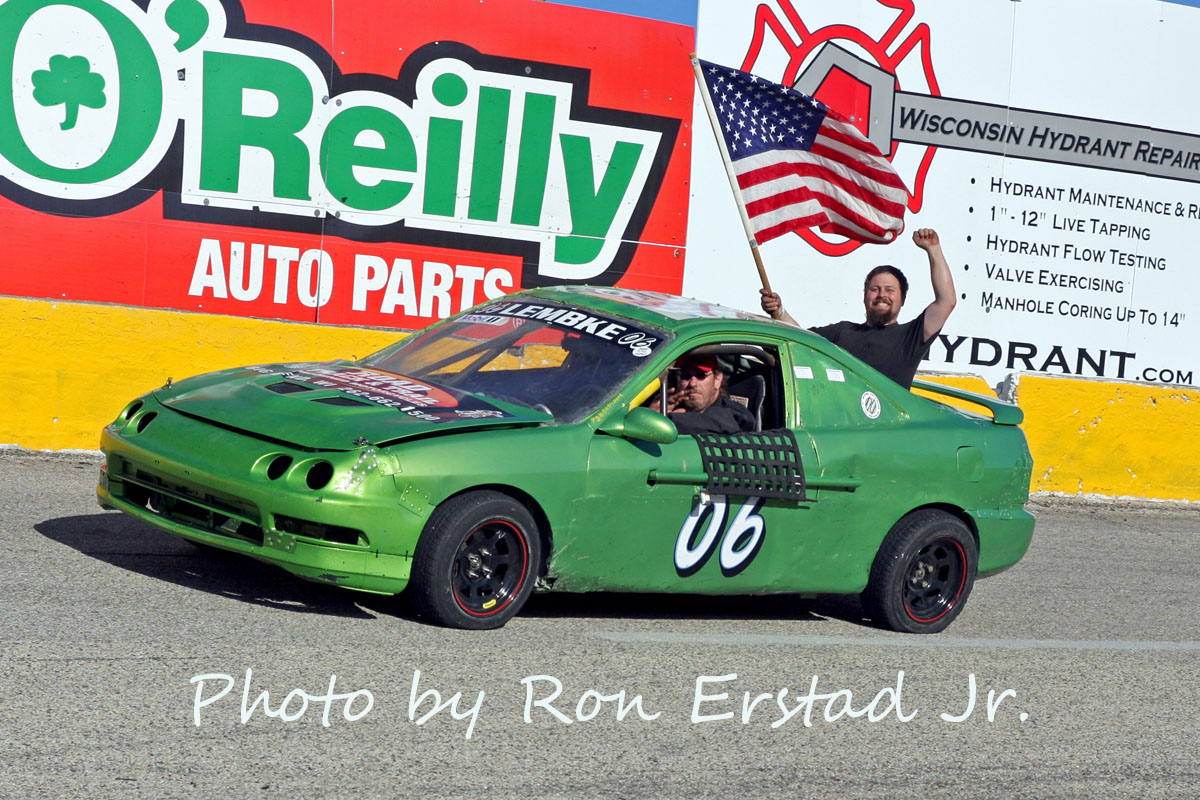