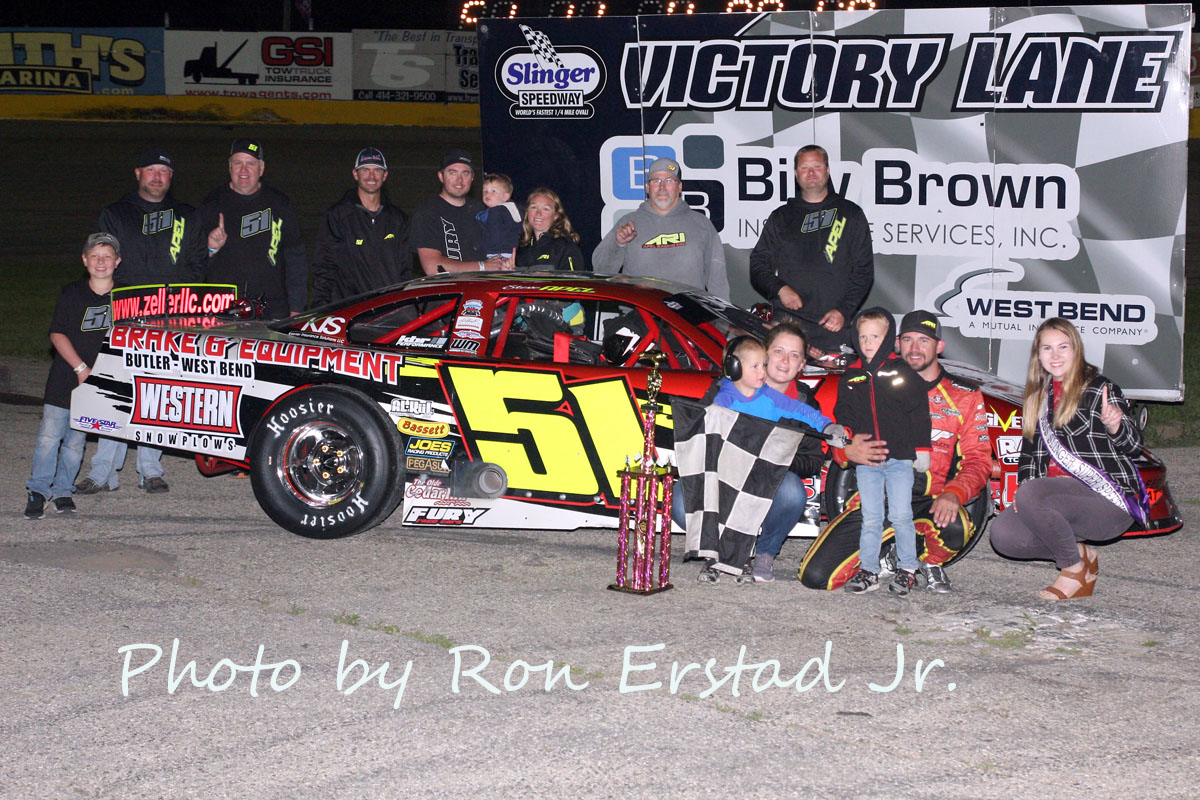 Slinger, Wis., May 31—Defending track champion Steve Apel drove to a convincing victory in the Alan Kulwicki Memorial Sunday on Keith’s Marina Race Against Cancer night at the Slinger Super Speedway. The win was Apel’s first in the prestigious super late model race.

“It’s been a long time coming.” Apel stated reflecting on the important victory, “It’s been a tough start to the season with last week where the car was a rocket ship and we just got caught up in somebody else’s mess, but this week we bought a house, sold our old house, and fixed the race car and we did it.”

Apel started from the third position and watched as Nick Wagner and Rich Loch traded the lead in the early laps while Luke Fenhouse, Alex Prunty, and Brad Keith all raced in tight formation at the front of the field. The lone caution flag of the event waved early on lap six when Conrad Morgan’s car suddenly snapped to the right and struck the wall hard in between turns three and four. Morgan emerged from his wrecked car on his own and was checked by the medical crew as a precautionary measure. As racing resumed, the battle between Loch and Wagner for the lead stabilized which allowed Apel to slice his way forward, taking the top spot on lap 12 as Brad Mueller joined the front running pack. Mueller muscled his way around Prunty for second place as Fenhouse held down fourth as Apel began to streak away with the lead. Apel’s lead stretched out during the mid-stages of the race as Prunty was able to work his way back around Mueller for second and Fenhouse followed suit a few laps later to take third. Fenhouse then dogged Prunty hard for the second spot as Apel maintained his comfortable lead. Apel had the field covered and he drove to the victory while Prunty held off a hard charging Fenhouse for second. Brad Mueller and Brad Keith completed the top five finishers in fourth and fifth respectively.

“It was pretty good running there with Luke (Fenhouse) as he had a fast car and I wasn’t sure I was going to be able to hold him off,” Prunty said after following up his win last week with a runner-up finish, “I don’t know if we wouldhave had anything for Steve (Apel) but I have to thank the crew and my sponsors as we have started the year with a first and a second and we will just keep rolling.”
“The car was really good tonight, “ Fenhouse stated after his impressive third place finish, “It was really rolling in turns one and two but in turns three and four it was a little tight. It was a good night and I really have to thank everyone who has helped me out.”
Mike Held finished in sixth place followed by Nick Wagner and Rich Bickle in seventh and eighth respectively. Chris Blawat and Rich Loch rounded out the top ten finishers.

Nick Wagner won the super late model fast dash and Brad Keith was the evening’s fastest qualifier after circling the speedway in 11.248 seconds.

Jacob Nottestad scored his first victory of the season in the 40-lap late model main event.

Nottestad took the top spot from early leader Nick Egan on lap 13 and following a caution period when Egan’s car billowed smoke and came to a stop, held off Jon Reynolds Jr. for the victory. Reynolds had to settle for second place as Jack Stern finished third. Zach Prunty took the checkered flag in fourth followed by Max Kahler in fifth.

Dan Church own the first late model heat race and Jon Reynolds Jr. topped the second late model heat. Tom Berens was the fastest qualifier in the late model division after turning in a lap in 12.069 seconds.

Jake Schraufnagle won the 35-lap sportsman feature after taking the lead late in the event from Andrew Meyerhofer. Meyerhofer finished in second place just ahead of Jay Kalbus in third. Paul Wager finished fourth and Bobby Gutknecht was fifth. Sportsman heat races were won by Bill Prietzel and Bobby Gutknecht while Ryan Gutknecht set a new track record in qualifying with a lap in 12.521 seconds.

Carl Benn won the 25-lap Slinger Bees feature as he held off Brad Held for the victory. Marty Tackes finished third followed by Mitchel Strobel and Brandon Mennicke. Slinger Bees heat races were won by Tommy Elsinger, Austin Omernick, and Carl Been. Kevin Lentz was the fastest qualifier with a lap at 15.211 seconds.

The Slinger Sixers division for six-cylinder cars debuted and the inaugural feature event was won by Mark Fogel Jr. Marty Tackes finished second while Sean Worman, Shawn Lounsbury, and Chad Mausehund completed the top five finishers. The Slinger Sixer heat race was won by Bradley Lounsberry who also was the fastest qualifier with a lap at 16.395 seconds.

The Sheryl’s Club 175 entry won the Bar Car race which featured seven entries all sponsored by local taverns and driven by amateur drivers. During intermission many raffles and auctions were held benefiting Chix4aCause charity and their fight against cancer. 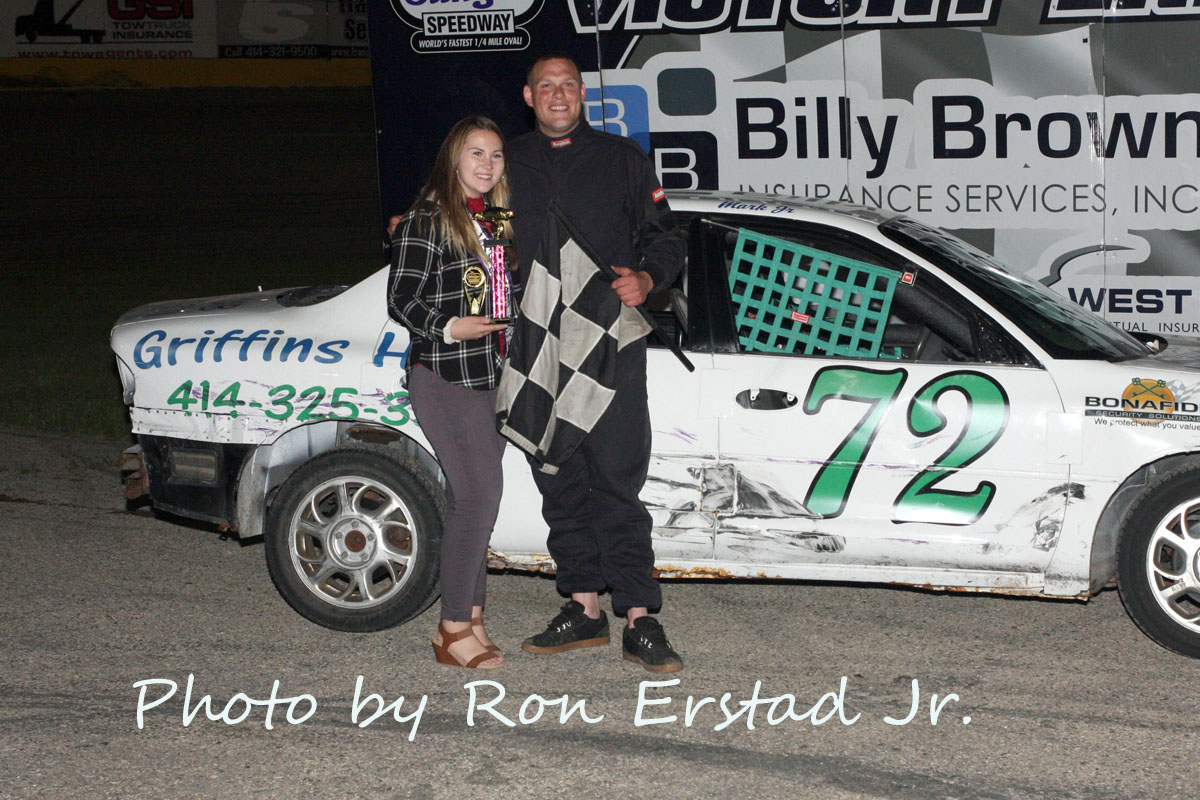 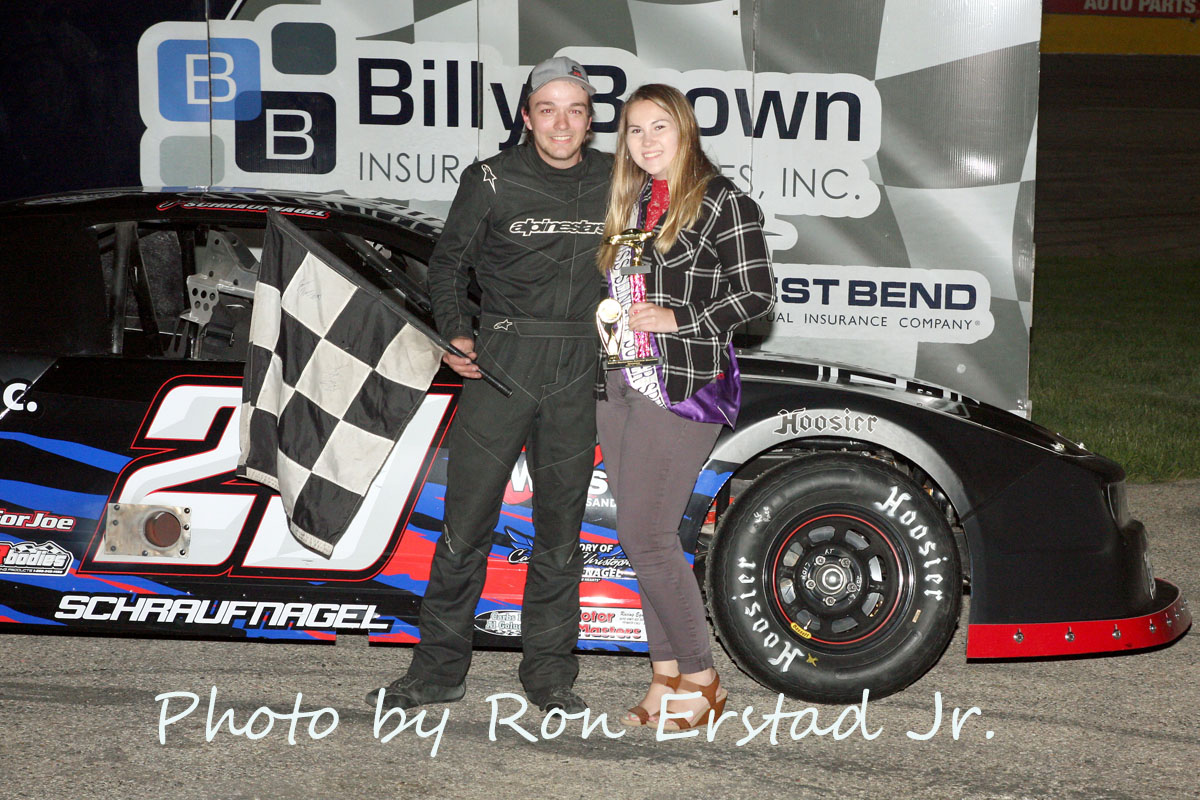 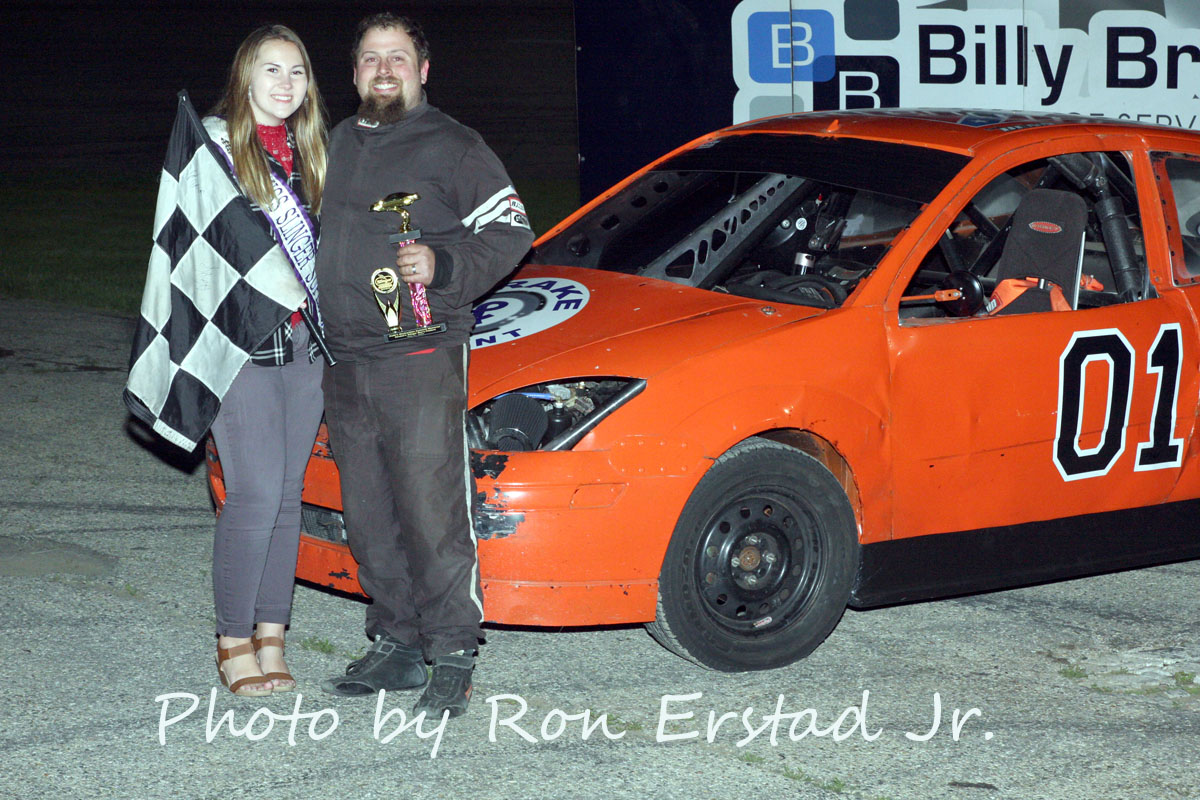 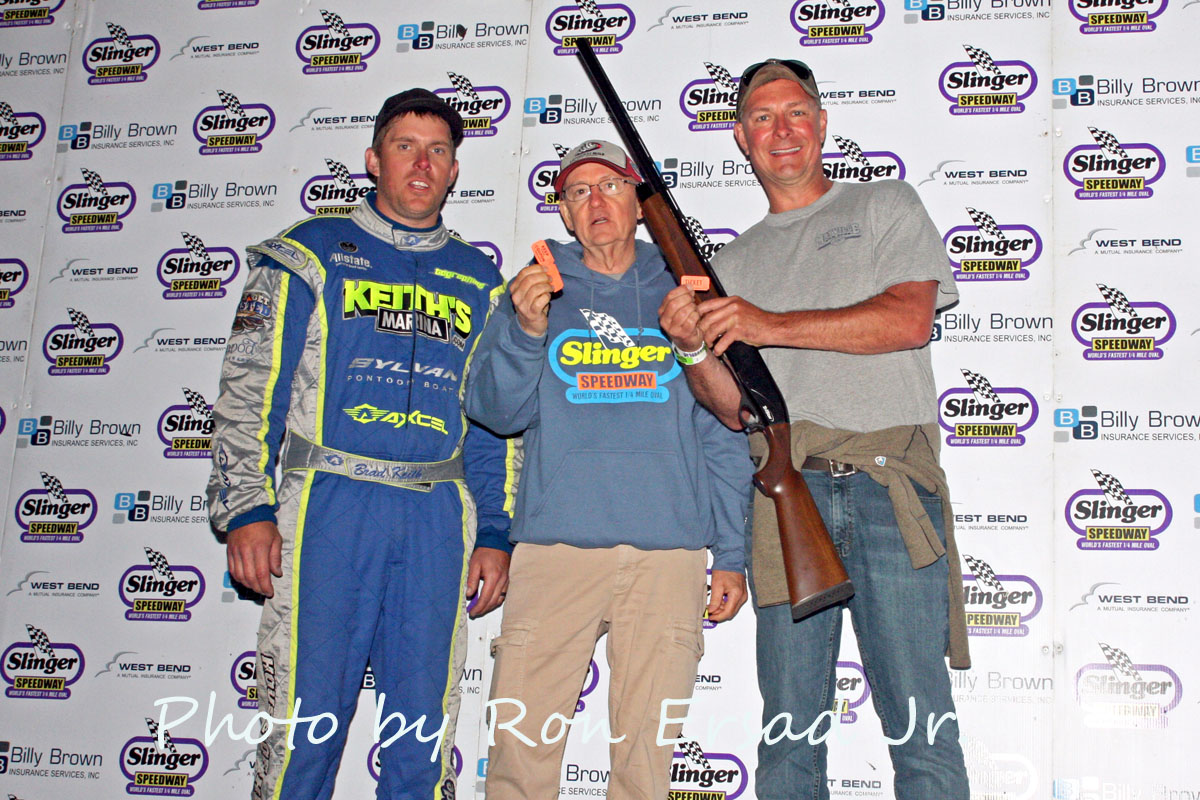 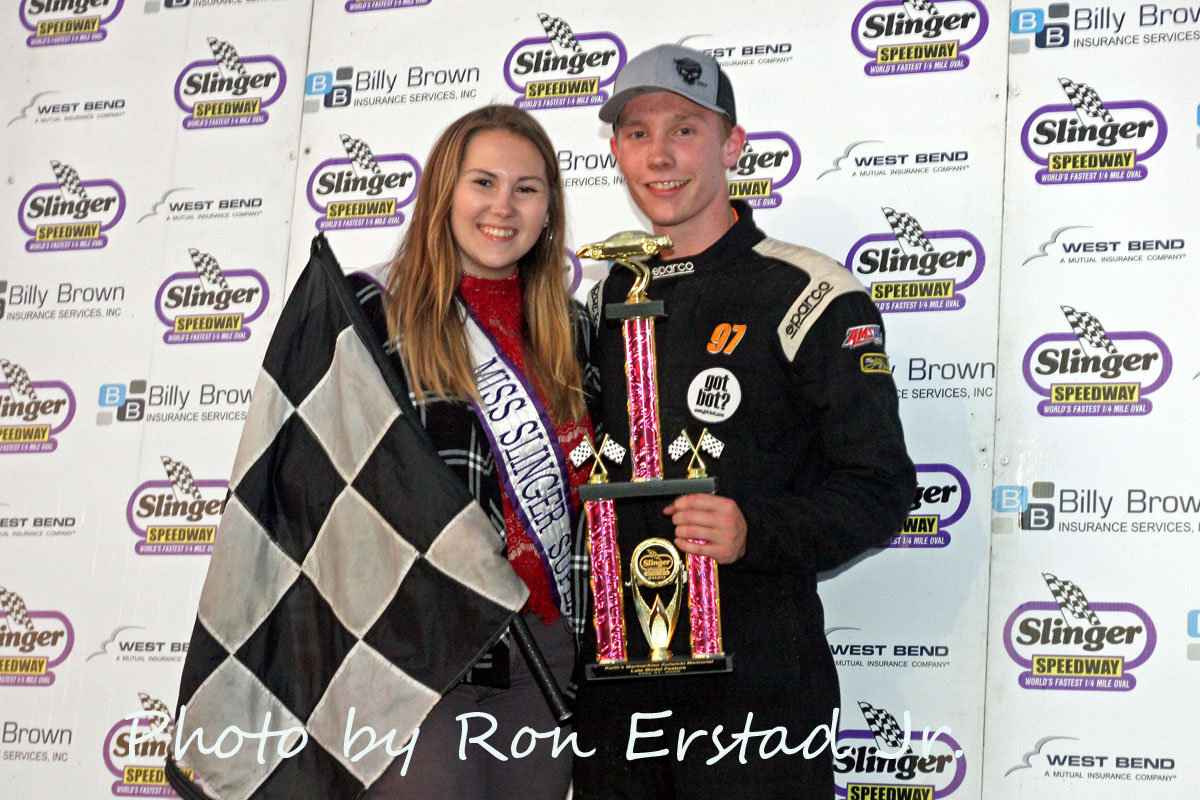 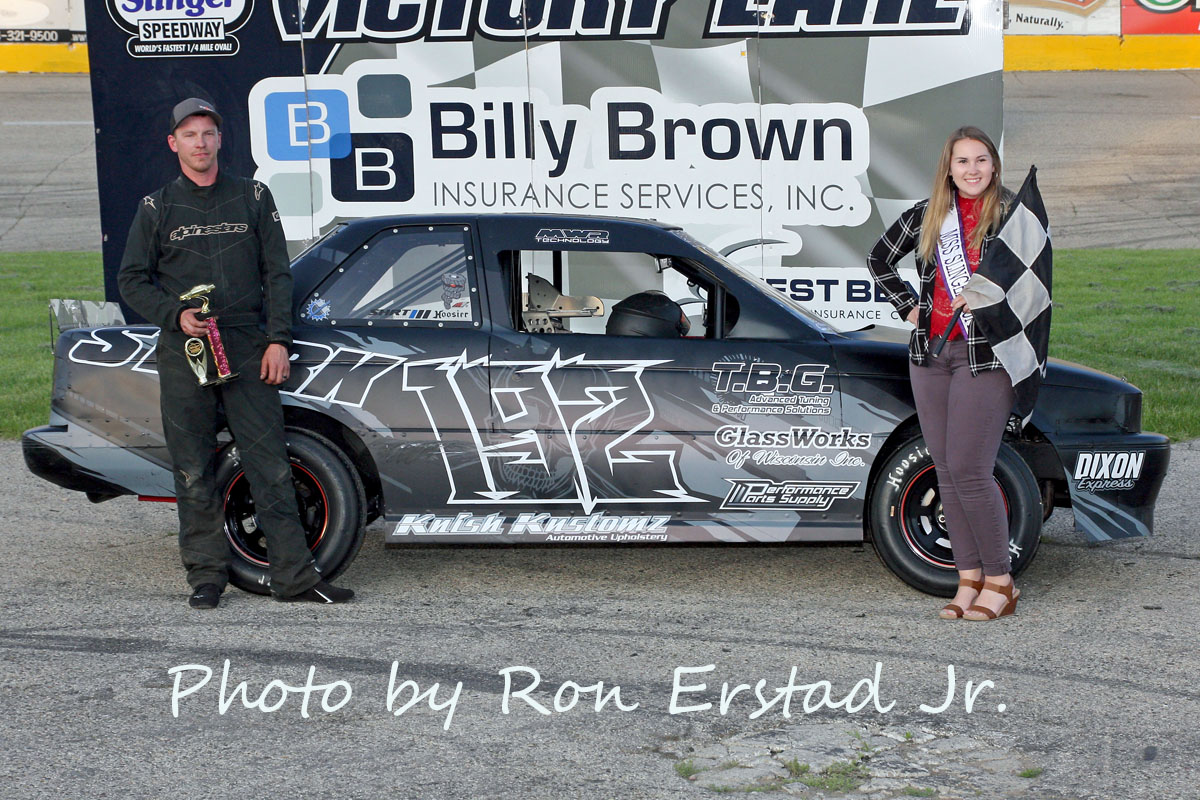 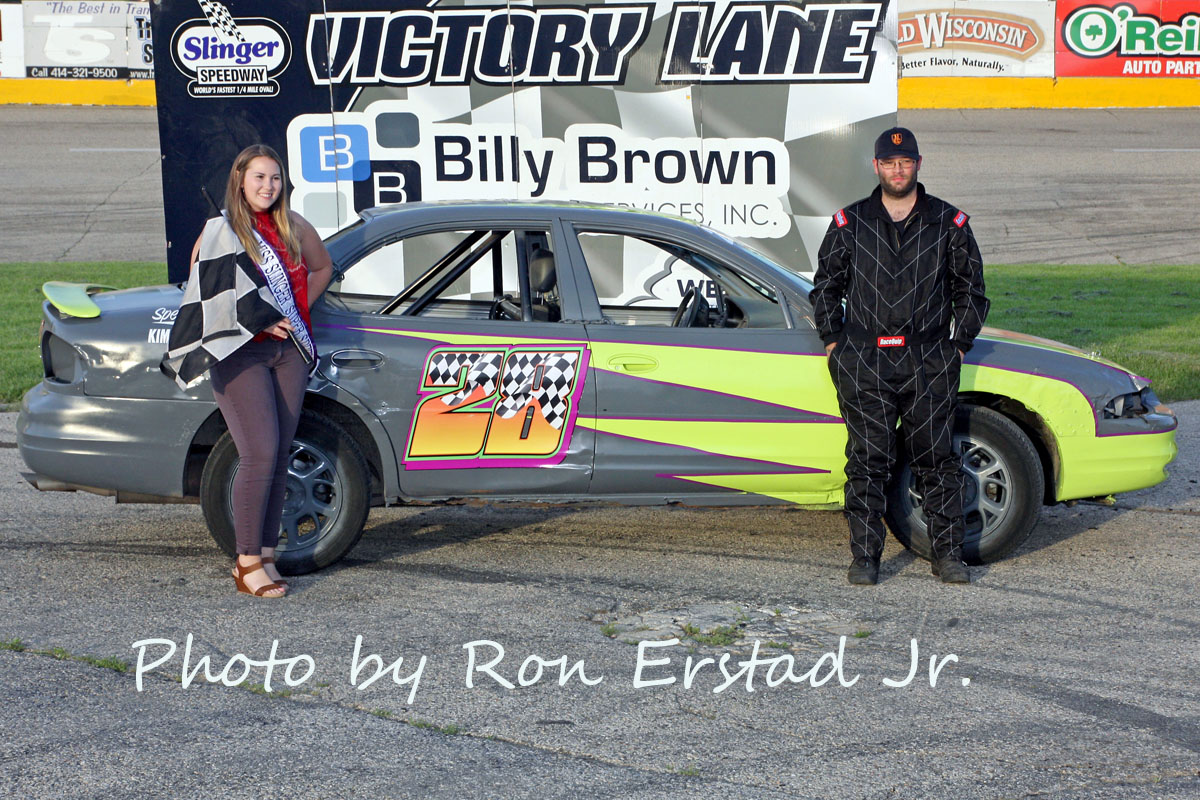 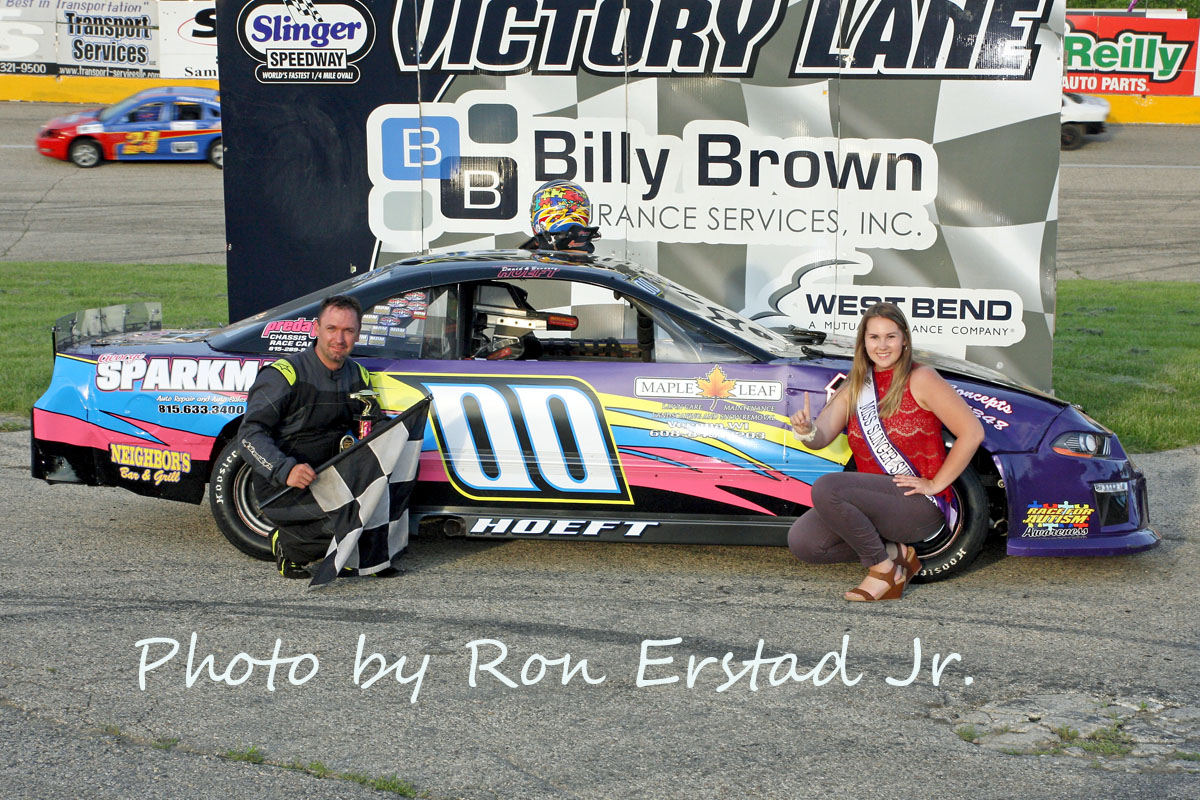 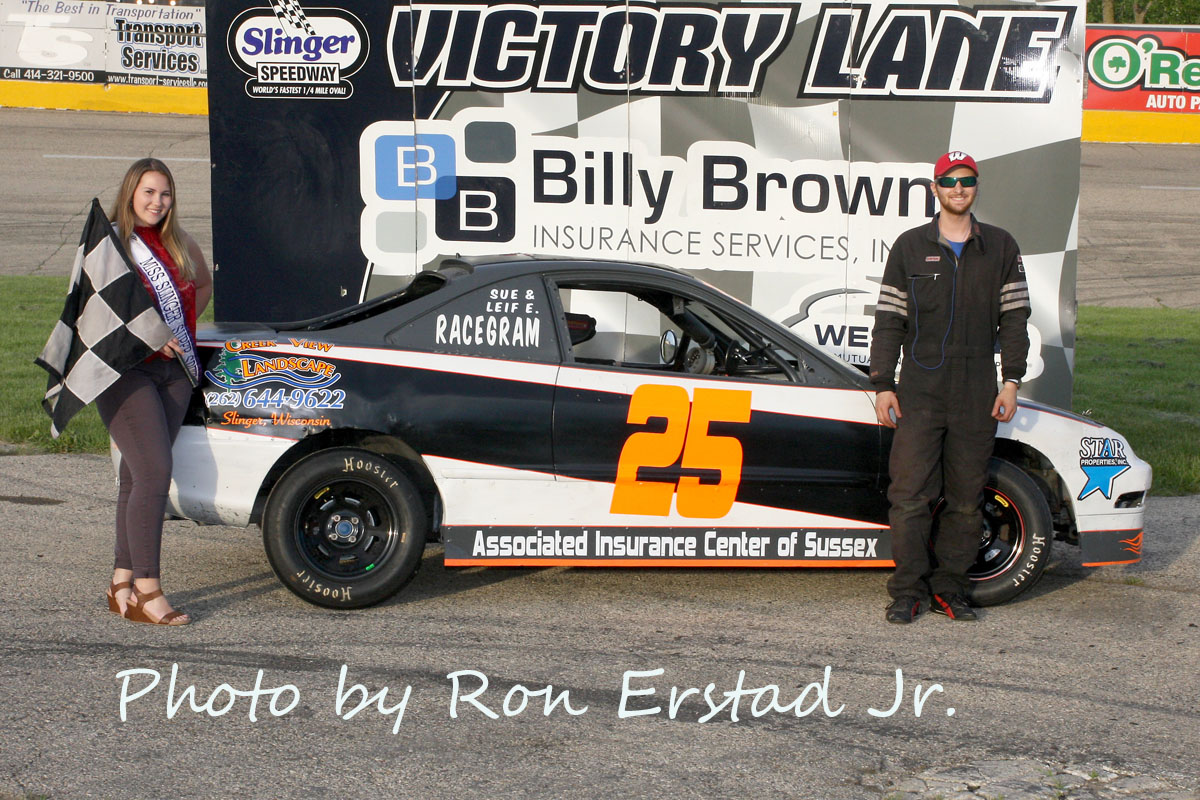 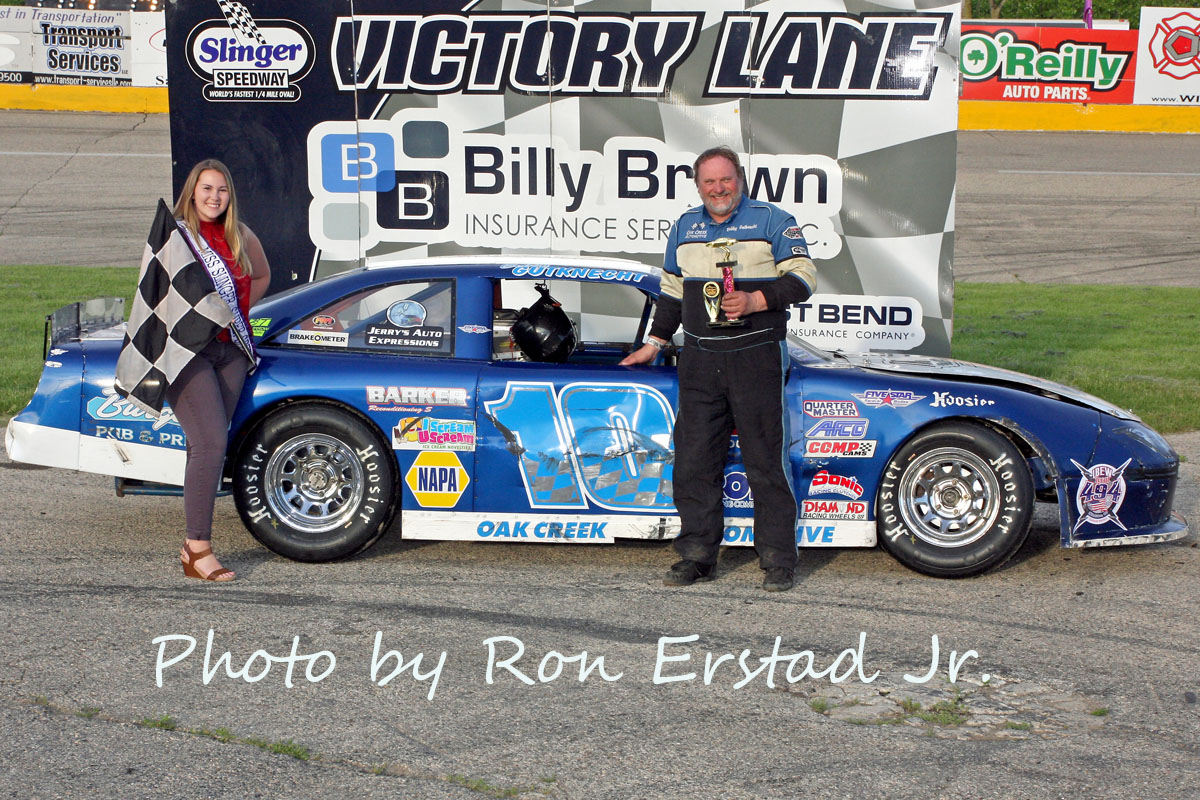 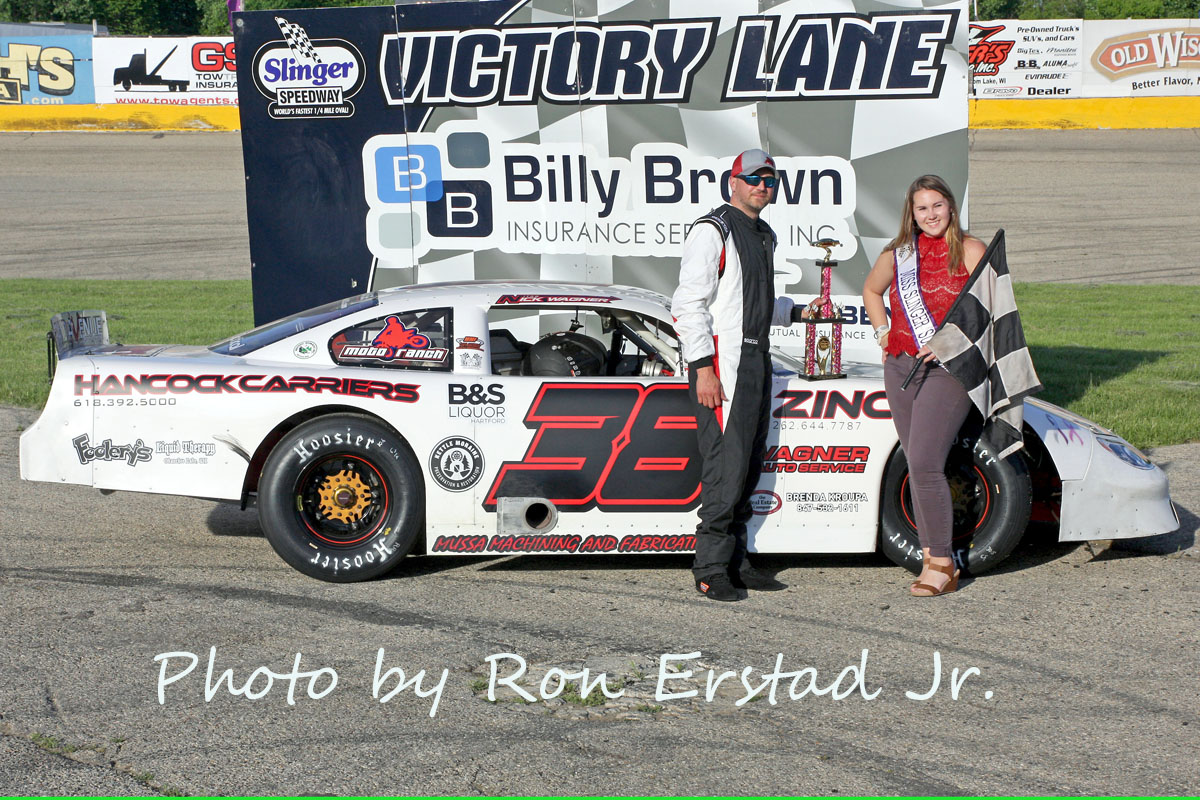 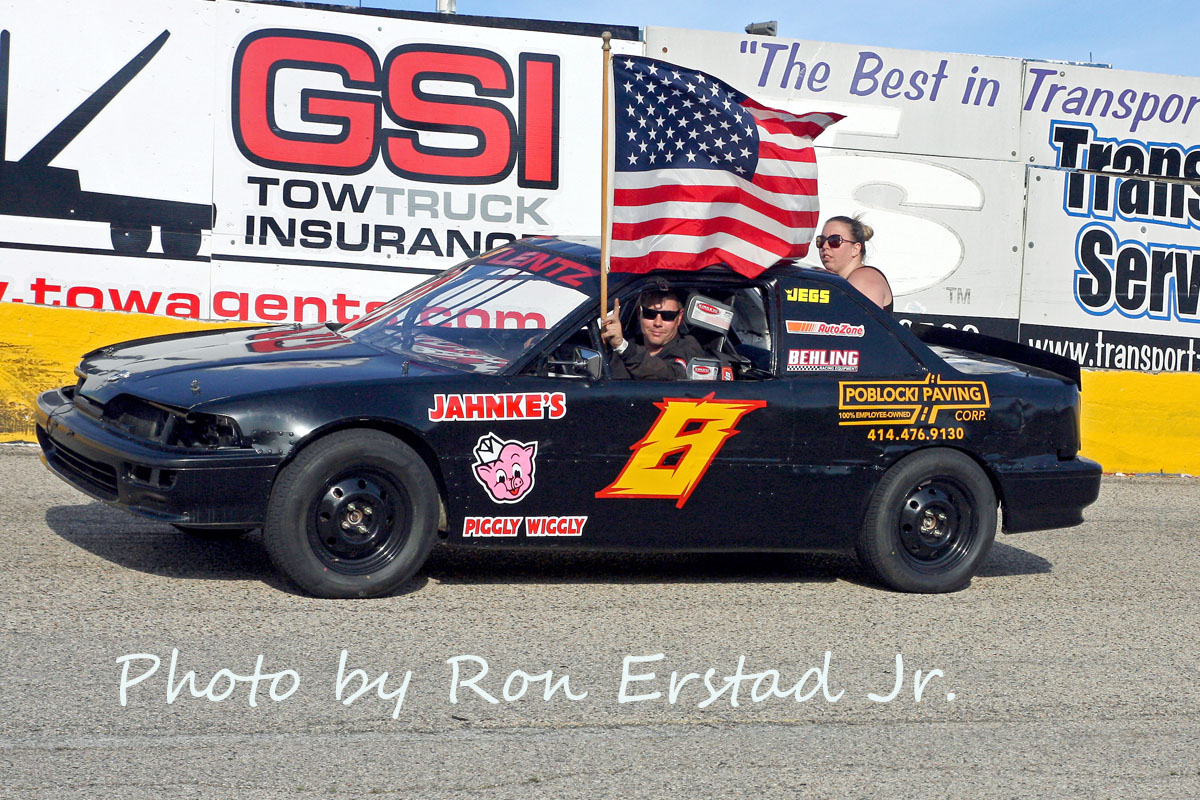 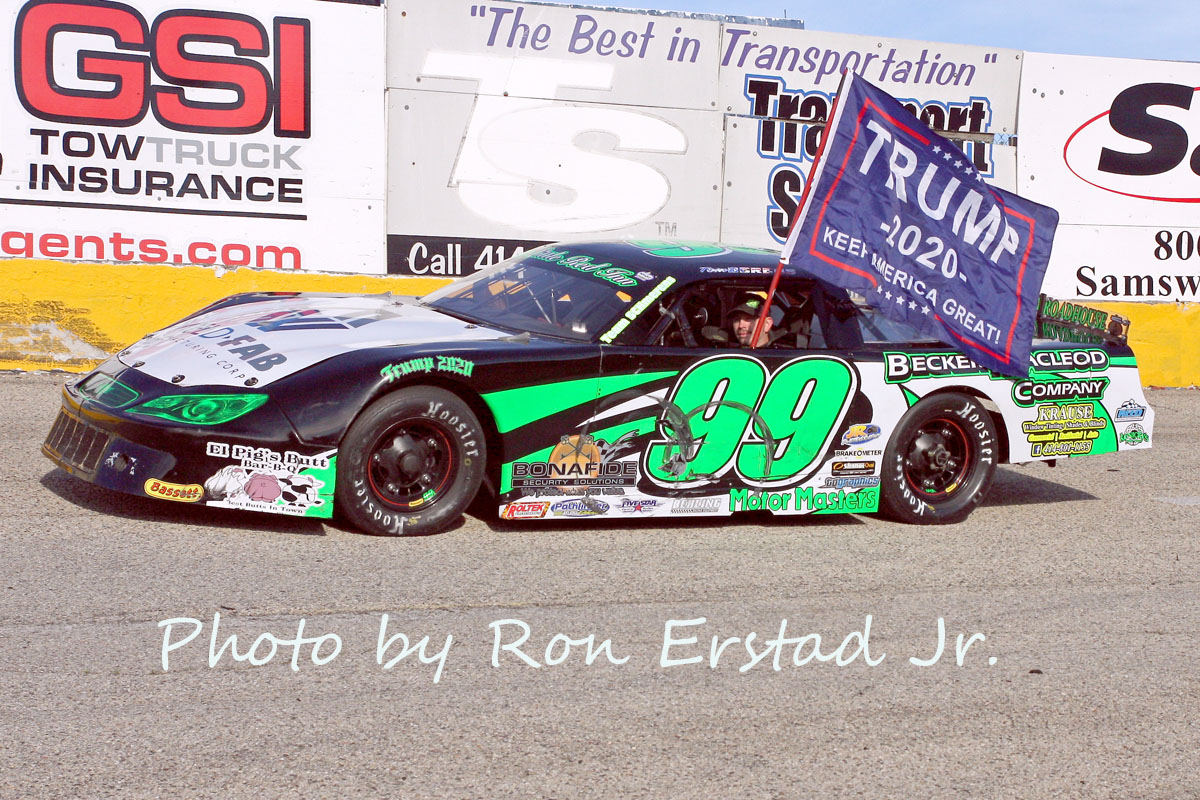 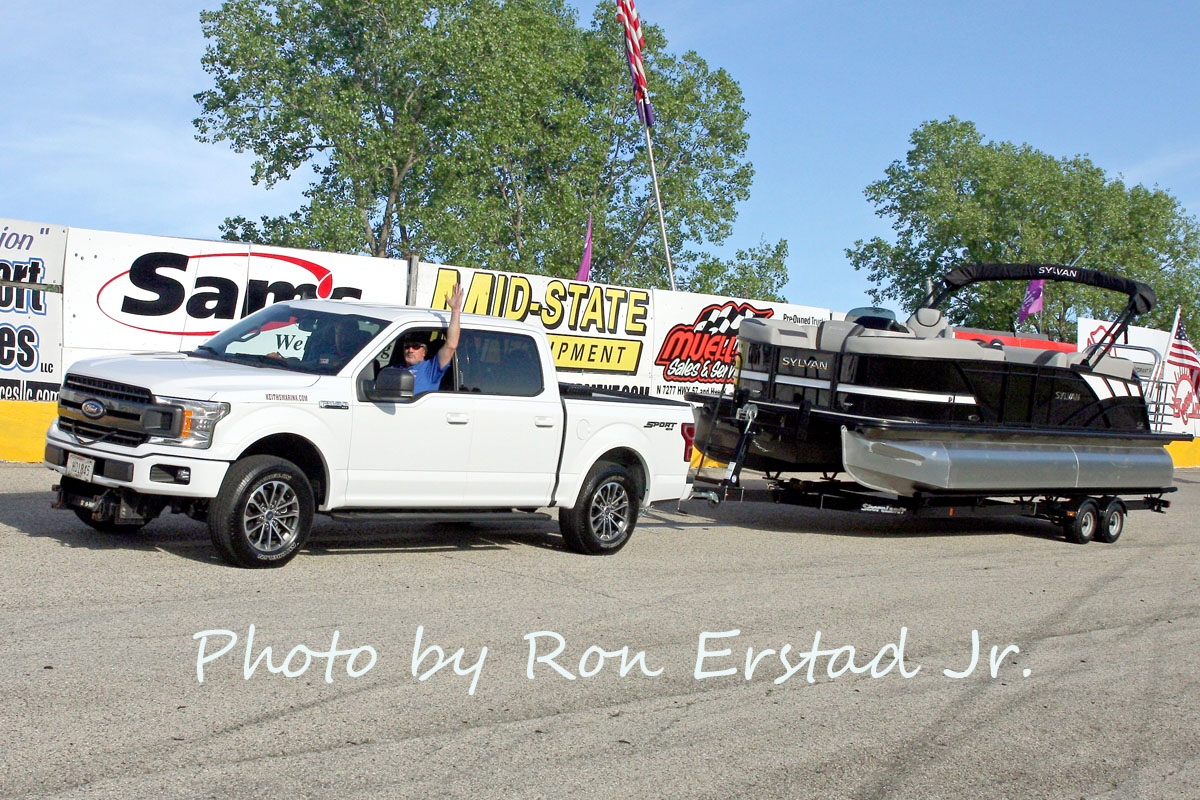 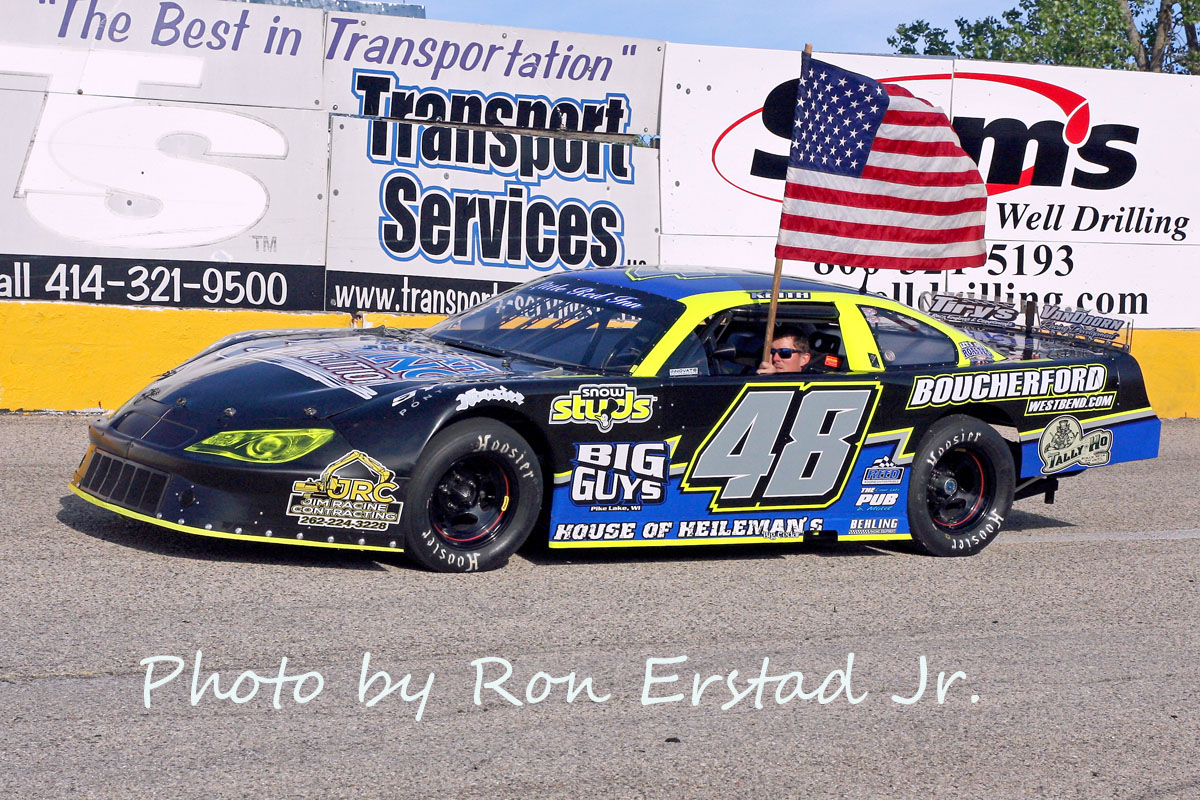 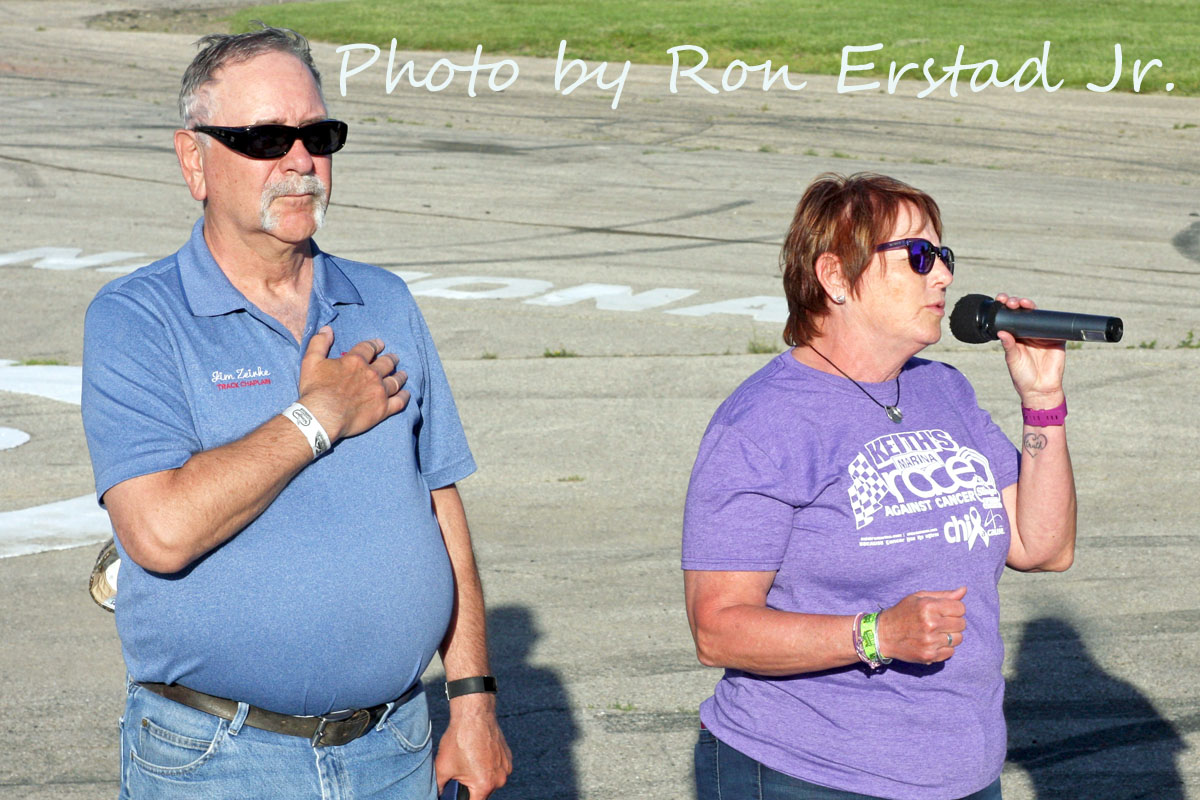