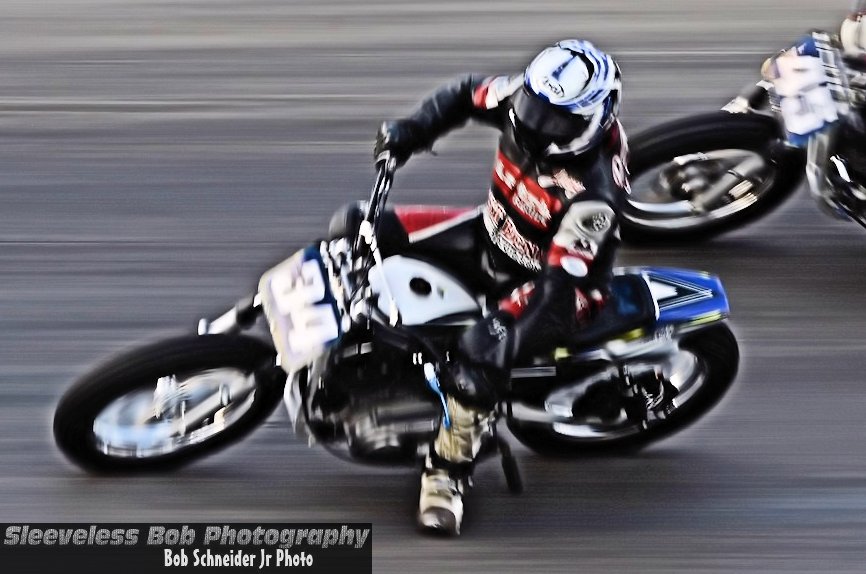 How did you get involved with racing motorcycles?
I got involved when I was 5 years old. My neighbor raced and invited me to start racing their bikes.

How did the Hooligans end up racing at Slinger?
The Hartford HOG chapter rents out the pavilion every year. Due to their relationship with West Bend Harley Davidson and their race team, it was discussed to have the Hooligans come and run an exhibition race.

You’ve raced a Super Late Model and a motorcycle at Slinger. Which was more difficult?
It was much more difficult for me to race a Super Late Model because of my limited experience in a racecar, but to me it’s much more fun. Motorcycles are second nature to me now so it’s much easier. I’d love to have some car guys take a few laps on a bike some time.

How did you get your bike number (#34)?
I got the #34 in 2007 after I made my first AMA Grand National main event in 2006 at the Peoria TT. I’ll be running #1 Sunday after winning the Grand National Hooligan Championship last season.

What do you like about Slinger Super Speedway?
I’ve been coming to Slinger since I was a little kid. The racing is always great and I think it’s one of the more technical tracks in the country.

Which Slinger driver, past or present, do you respect the most and why?
I respect Brad “JJ” Mueller a lot. He’s been racing there a long time and no matter how his night goes he’s upbeat (usually) and welcoming to the fans.

Who do you need to thank?
Crew: Me, Myself, and I. 🙂
Sponsors: Suburban Harley Davidson, Supertrapp, Russ Wernimont Designs, TD Graphics, Motion Pro, Pro Plates, and Vortex Racing

What can fans expect to see when the Hooligans hit the track tomorrow?
Fans can expect to see well-prepared and built bikes. You’ll see a lot of close racing and tons of passing. Make sure to come in the pits afterward and look at the beautiful machines!

Who else is racing against you tomorrow?
One of the more recognizable names is J.J. Flairty. He won the 1st X Games gold medal for the Hooligan class at the inaugural race in Minneapolis. The West Bend Harley team will also be there with at least 6 riders. [Full list of riders: Louie Lauters, Dan Lauters, Justin Limberg, Hannah Lange, Parker Lange, Jay Scheffler, JJ Flairity, Jeremy DeRuyter, Matt Jensen]