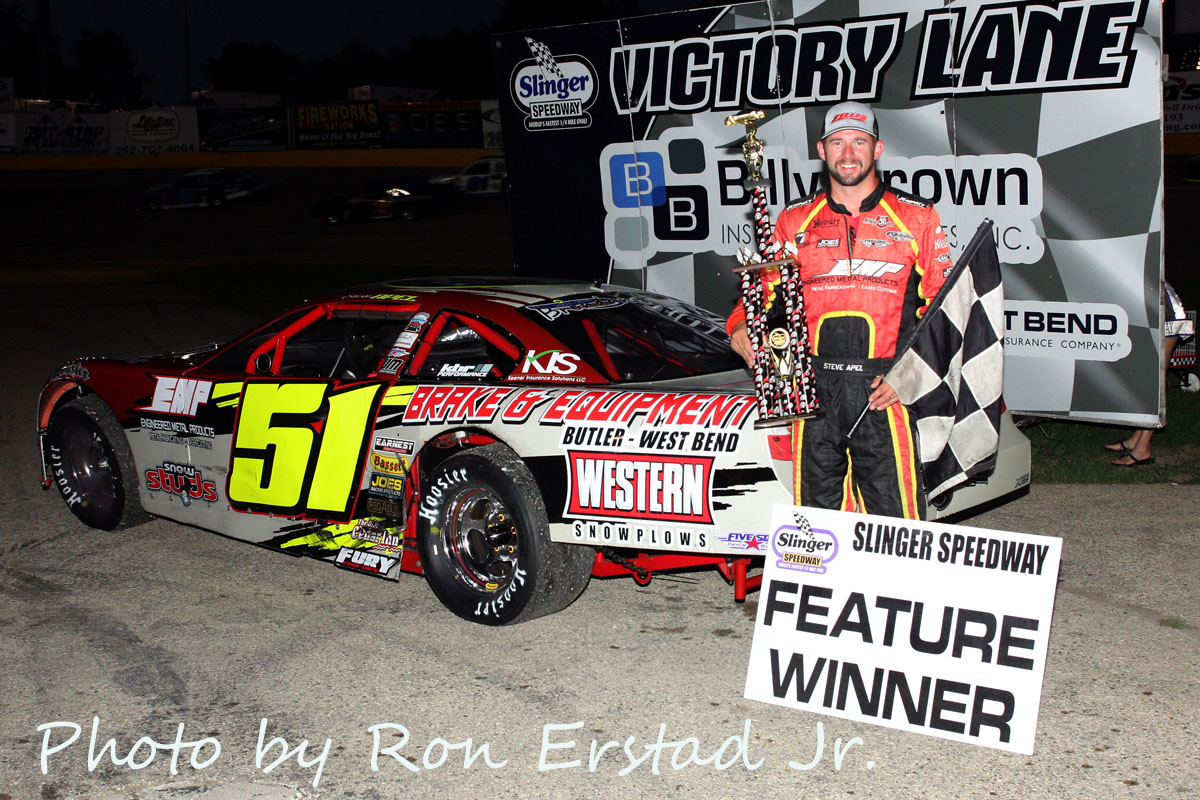 Slinger, Wis., July 19— Picking up right where he left off when the super late models last raced a Sunday night at the Slinger Super Speedway, Steve Apel drove to a convincing win in the Tribute Night 75-lap main event.

“I can’t thank the crew enough because we wrecked the car pretty bad in the Nationals.” Apel stated reflecting on his crash in the prestigious event on July 7th following his June 28th victory, “And we bought a house and moved last week so between getting the new house set up and getting the race car done it’s been crazy but to come out here and race with Brad Keith and Brad Mueller and never rub doors, it’s been an awesome night.”

“I think it was a difference of picking the right lane on the last restart,” second place finisher Brad Keith said following the event, “He (Apel) found a hole and once we both got out front we were turning equal lap times,”

“We didn’t have a bad car and we are still trying to work some bugs out of it,” Brad Mueller stated after leading early before finishing third at the checkered flag,” When I saw Steve (Apel) coming up on my right rear I knew my night was over and then Brad (Keith) came by and we were able to hang onto third. The car is struggling with being tight in the middle of the corner but we’ll get to the bottom of it.”

Brad Mueller took the lead at the drop of the green flag from the outside front row starting position as polesitter Nick Wagner’s car kicked loose in the first turn which enabled Rich Loch and Mark Eswein to advance to second and third respectively. R.J. Braun, Mike Held, and Brad Keith all used the inside groove to move forward as well while Mueller continued to lead. Farther back Chris Blawat, Steve Apel, and Alex Prunty also worked their way ahead as the front six raced in single file formation. Keith was able to dive to the inside of Held for fifth to take the spot while Blawat and Apel followed suit as Held lost the positions as he was trapped in the high groove. Up towards the front, Rich Loch began to dog Mueller for the lead while Keith continued his march forward by picking off Braun to take fourth place while setting his sights on Eswein for third. Once again Apel followed Keith’s lead and used the inside lane to also pass by Braun while Keith raced around Eswein to take third. When Held also tried to pass Braun using the inside lane, contact between the cars sent Held’s car sliding to the infield before it came up the track and was struck by Blawat’s car. Blawat’s car was then struck by Alex Prunty who had nowhere to go and could not avoid the incident as the caution flag waved on lap 15. Held and Blawat were able to continue but Prunty’s car was heavily damaged and he retired from the event.

Mueller chose the outside lane for the restart leaving Loch the inside while behind them Keith chose the inside and Apel chose to try the top side as racing resumed. While Mueller and Loch battled side by side for the lead, Apel’s outside groove choice paid off as he was able to get around Keith for third. Apel then used the outside lane to first pass Loch for second and when Mueller moved to the inside after clearing Loch for the lead, Apel stayed up top and drove around him to take command of the race on lap 23. Keith also moved to the outside lane and passed Loch for third before also working his way by Mueller for second as Apel pulled away out front. With the top three stabilized, the best battle on the speedway was over fourth place between Loch and Mark Eswein, who made his first Slinger appearance of the season. Loch and Eswein raced alongside each other for much of the late stages of the race until Eswein drove hard on the inside into turn one with four laps to go which caused Loch’s car to move up the track and relinquish the position. In the closing laps, no one could catch Apel and he drove to the victory over Keith and Mueller. Eswein finished fourth and afterwards apologized to Loch over the late race incident while Mike Held finished fifth. R.J. Braun took the checkered flag in sixth and Rich Loch was seventh while Rob Braun, Nick Wagner, and Jacob Vanoskey rounded out the top ten finishers.

Rob Braun won the super late model fast dash and pocketed $300 courtesy of Mac Tools and Brad Keith was the fastest qualifier after turning in a lap in 11.300 seconds.

Jack Stern paced the 40-lap late model feature from start to finish and collected the victory over Ryan Gutknecht and Ryan Craine. Tyler Hromadka had one of his best races of the season as he finished a strong fourth while Cole Thomas finished fifth. Tom Jasinksi finished sixth ahead of Joe Shelby and Tom Berens in seventh and eighth respectively. Jerry Eckhardt and Mitchell Haver completed the top ten finishers. Defending track champion Jacob Nottestead experienced mechanical issues just before the halfway point and retired from the event.

Late model heat race victories were collected by Jerry Eckhardt and Joe Shelby while Jacob Nottestad was the fastest qualifier after circling the speedway in 12.116 seconds.

Ryan Gutknecht turned back the challenges of Jacob Schraufnagel to win the 35-lap sportsman feature. Gutknecht took the lead on lap 26 after early leader Dale Lecus Jr. exited the race with mechanical problems while leading. Jay Kalbus finished third while Bobby Gutknecht and Dan Calhoun were fourth and fifth respectively. Adam Bleskan and Jay Kalbus were the winners of the sportsman heat races and Jacob Schraufnagel set fast time with a lap at 12.662 seconds.

Dan Wood drove the Foolery’s Liquid Therapy entry to victory in the Bar Car race and Bill Shavlik survived a wild Figure 8 event to take the victory as the program wrapped up at 9:15 pm. 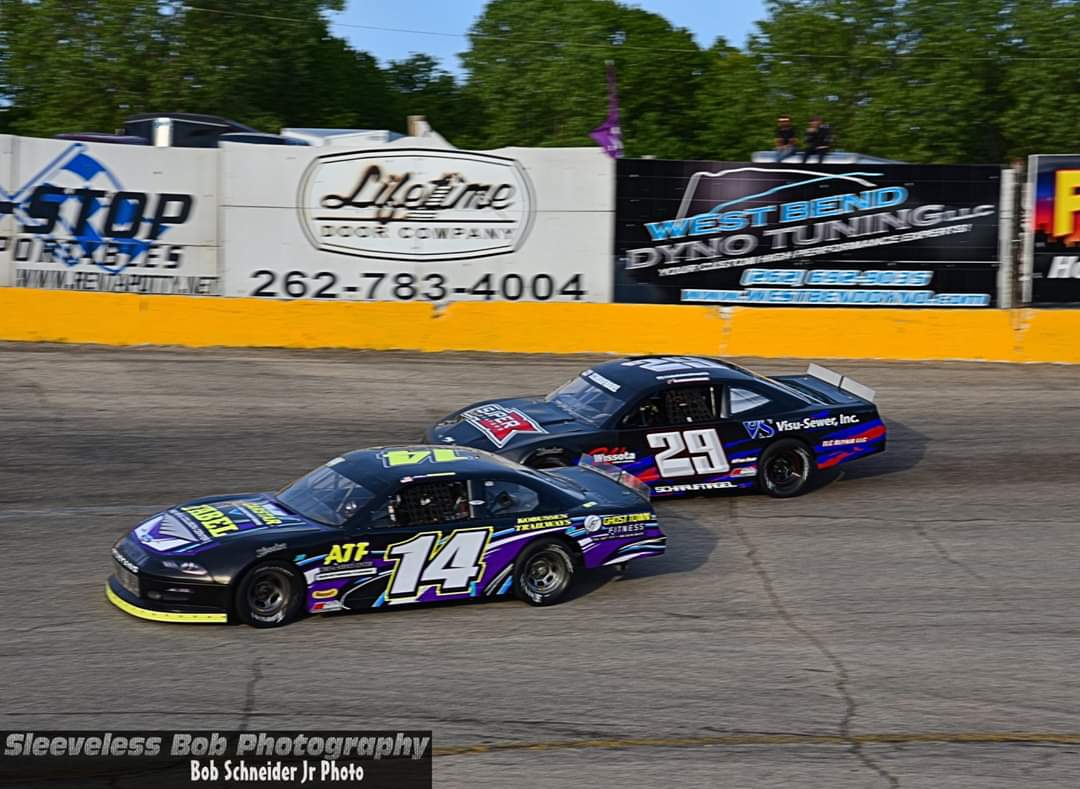 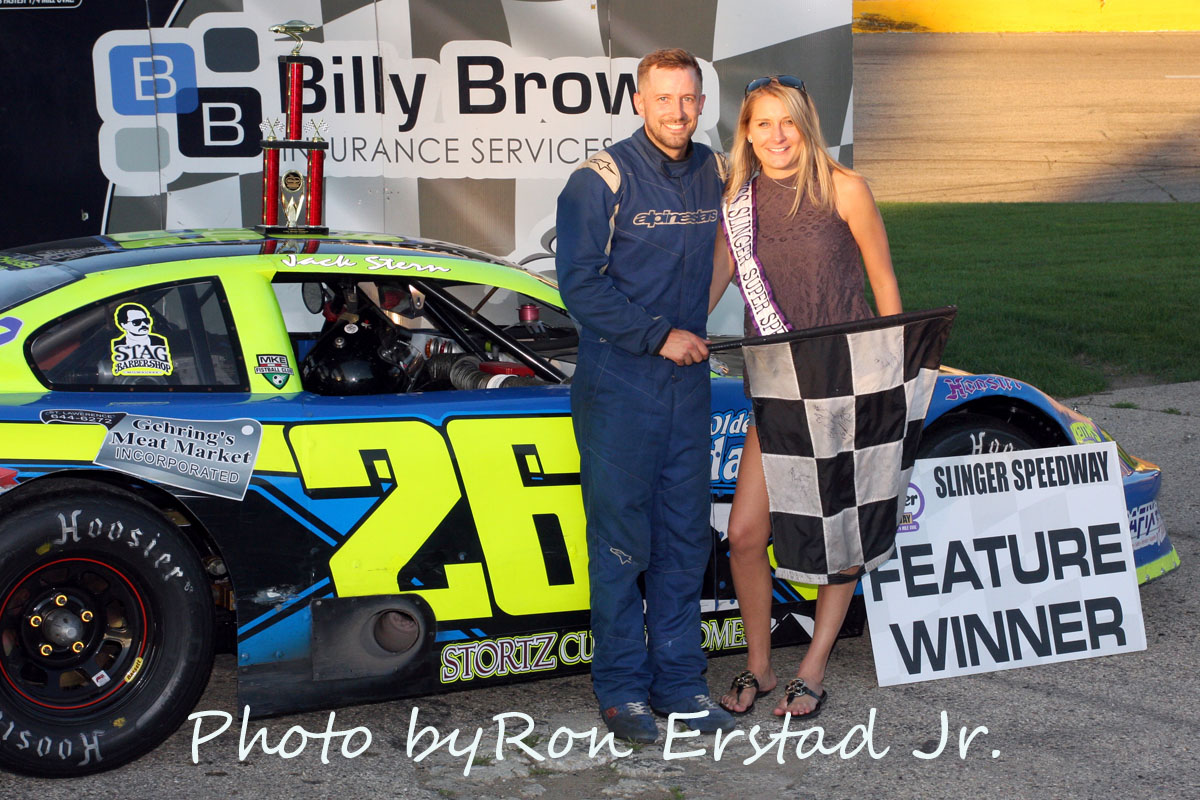 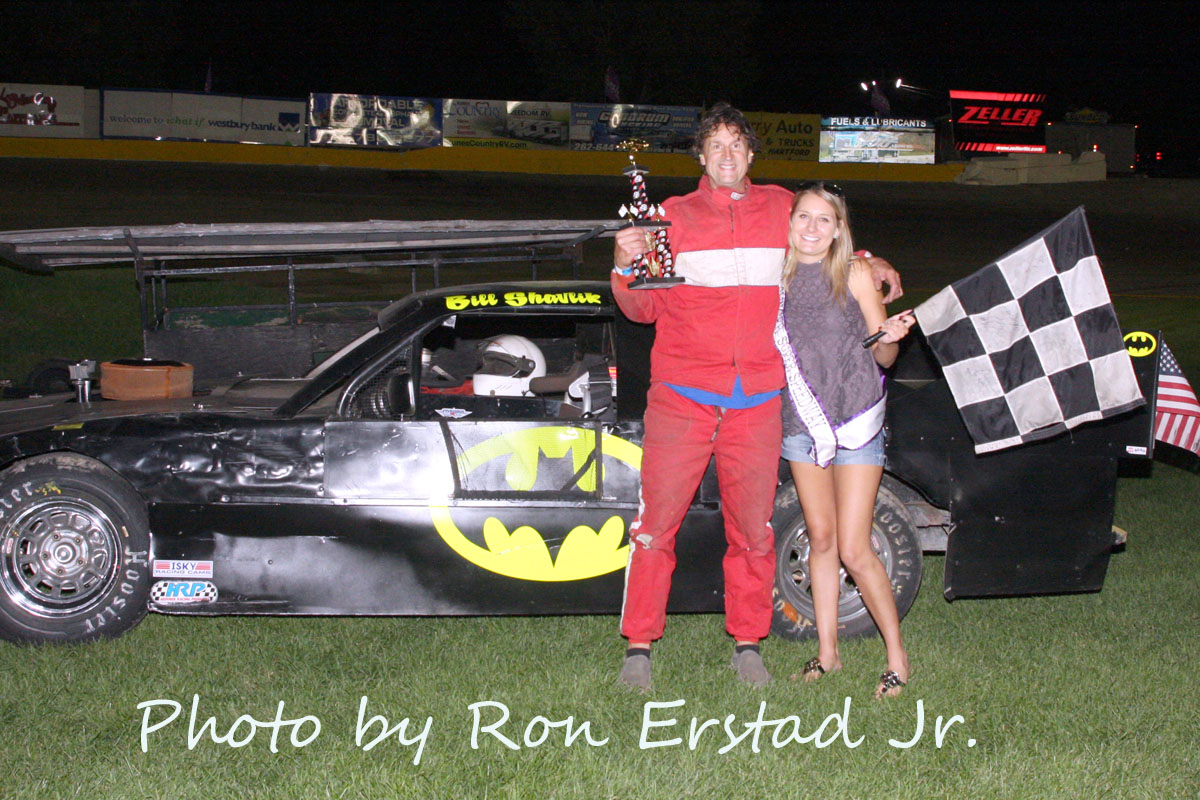 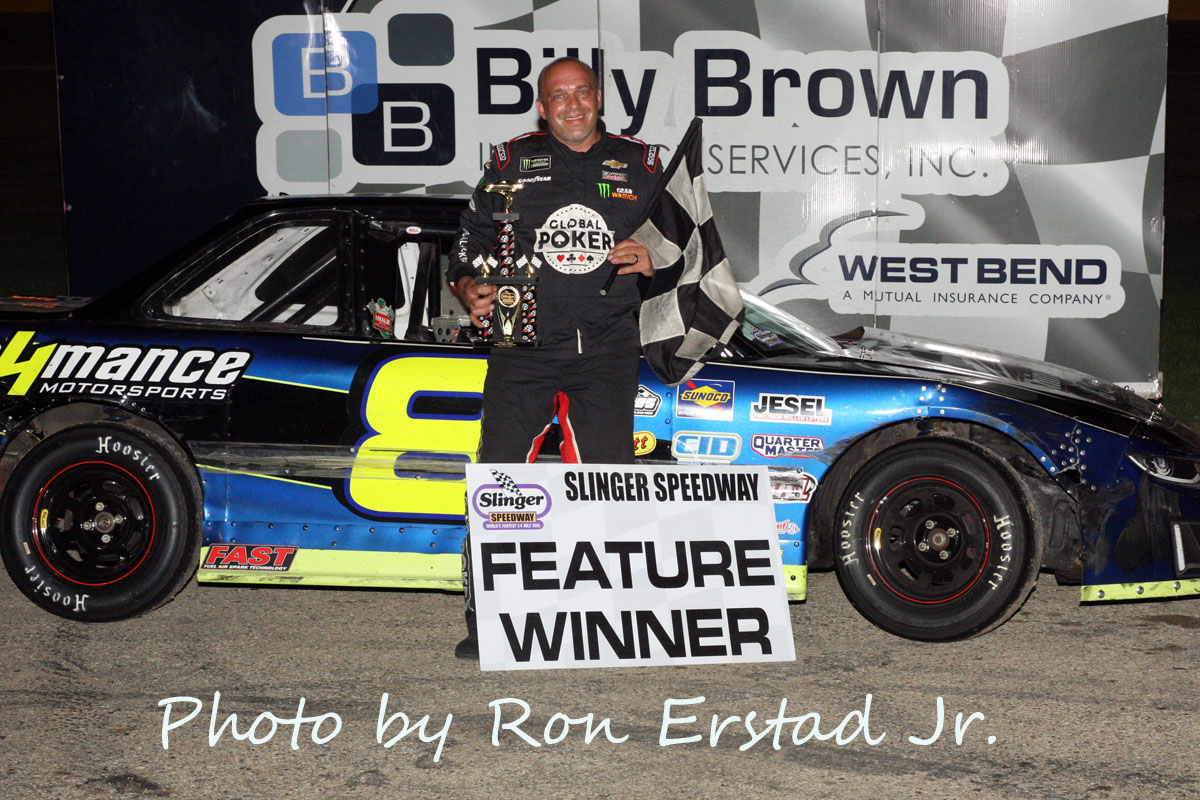 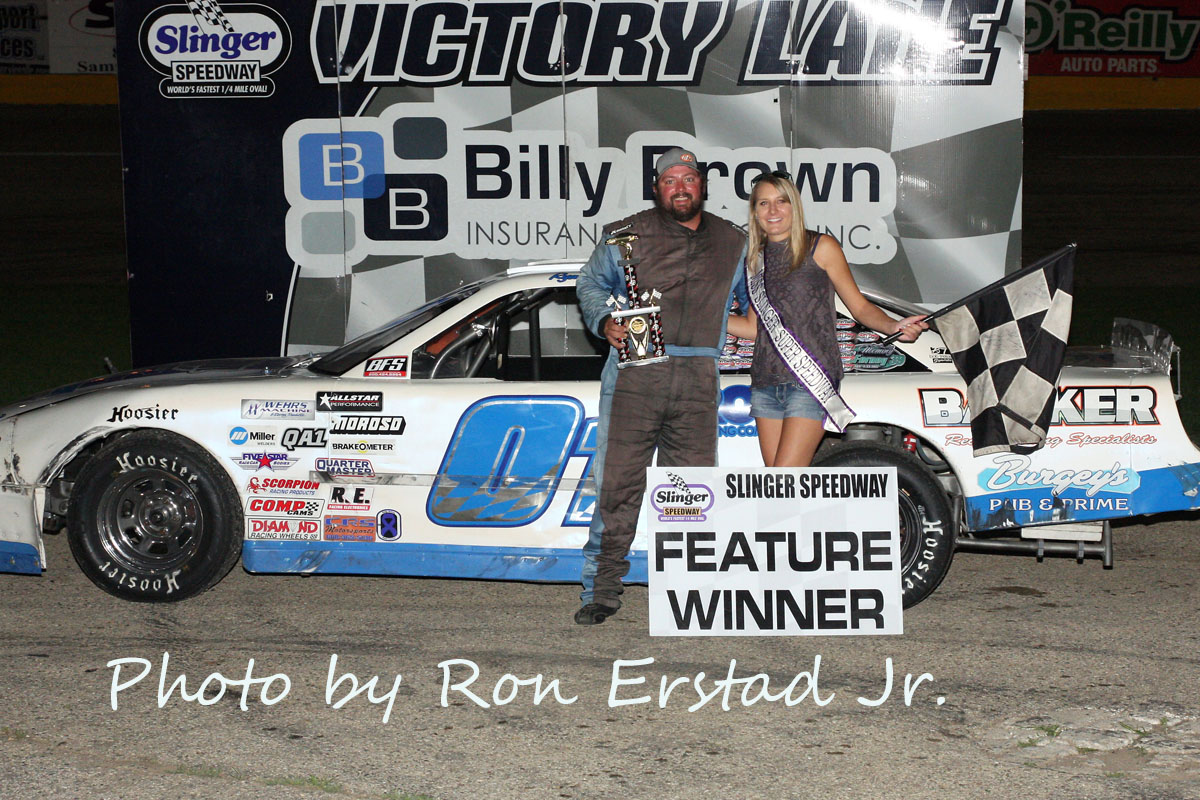 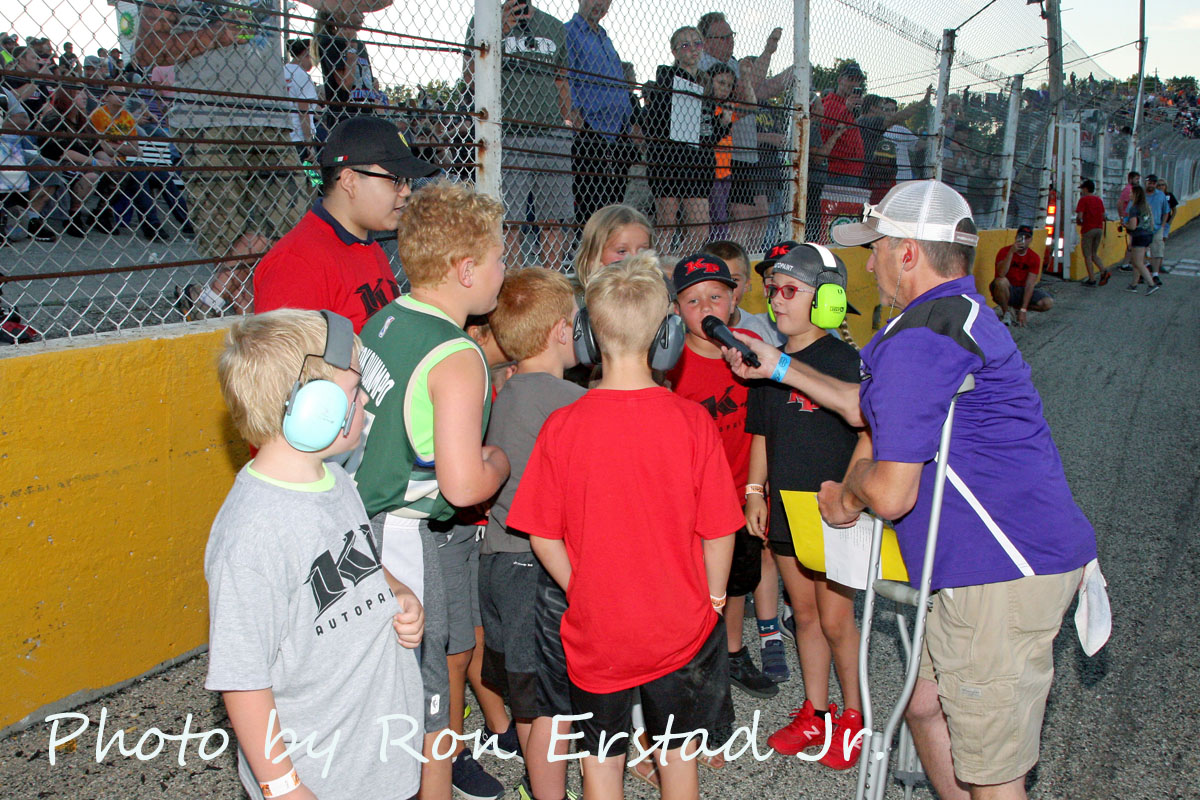 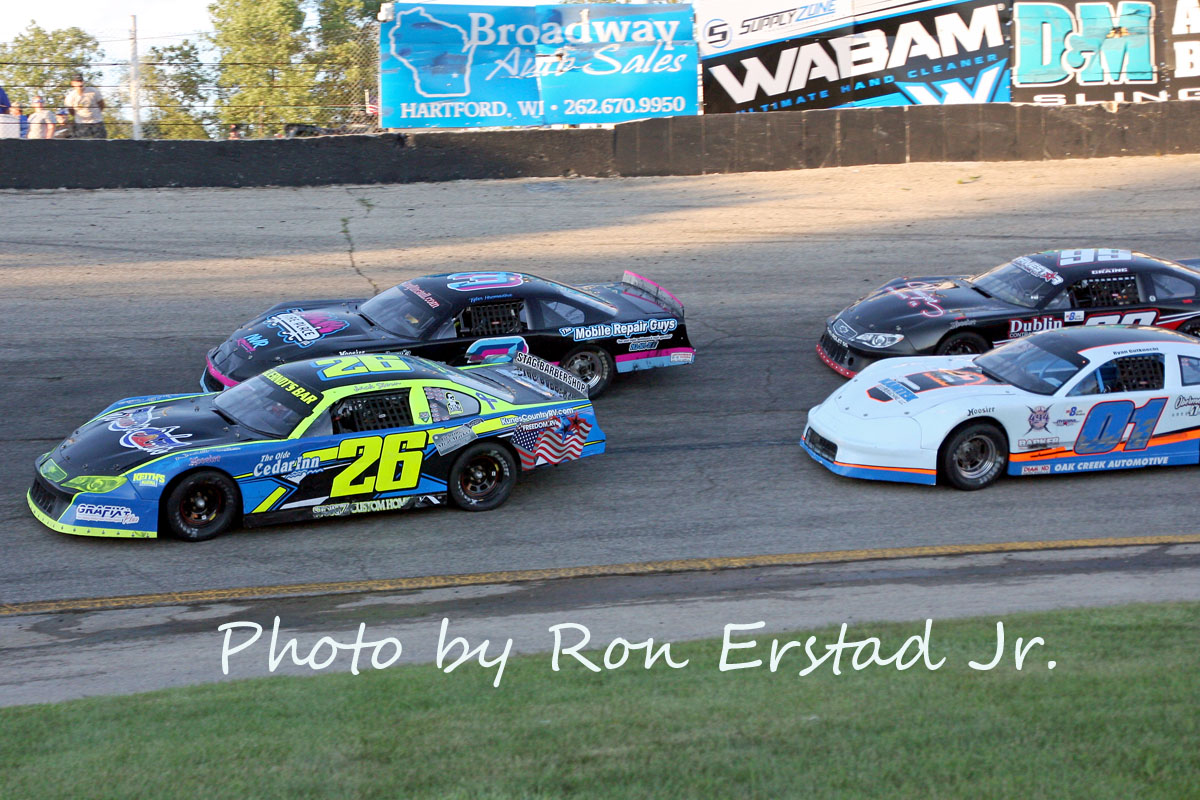 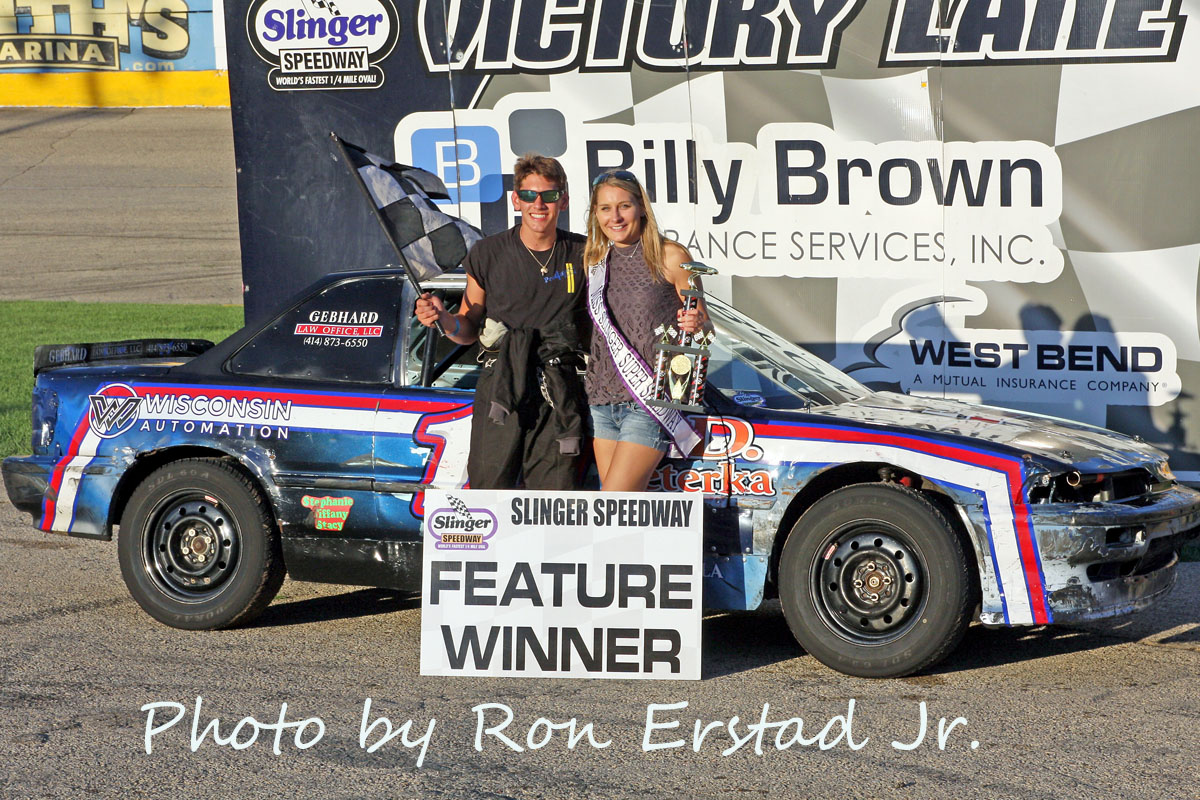 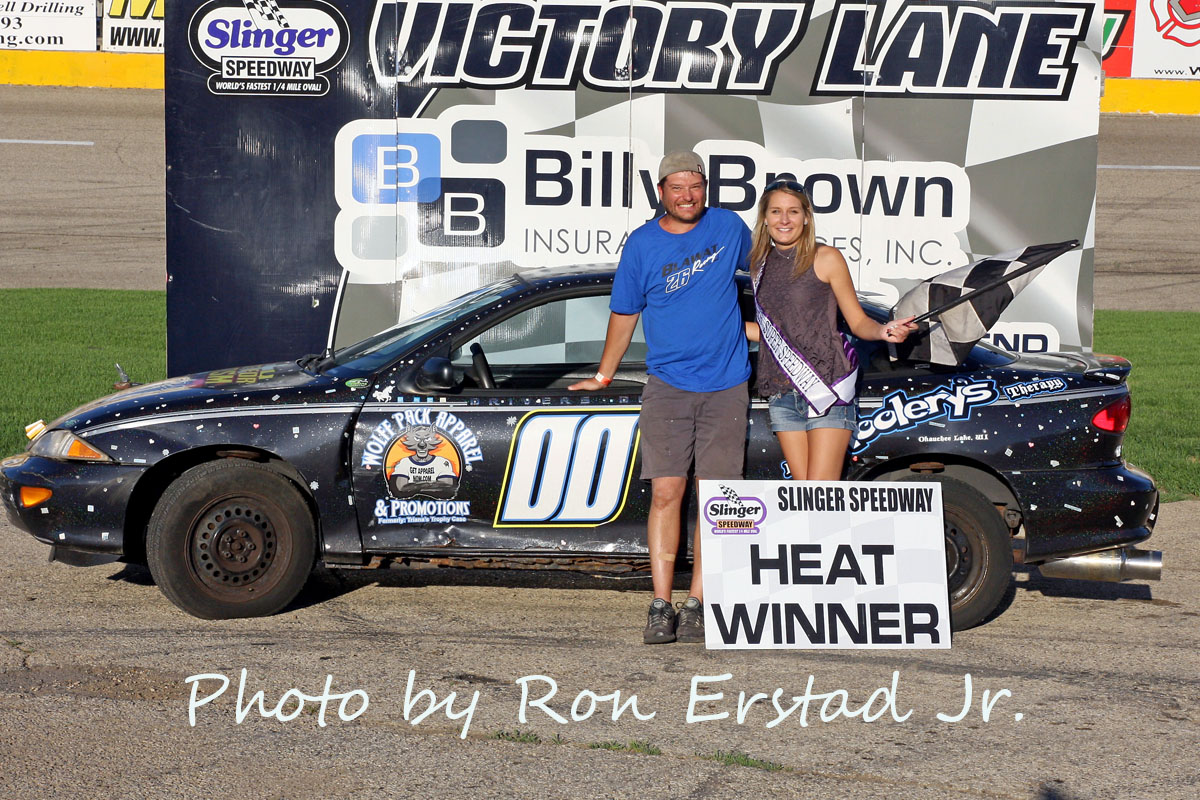 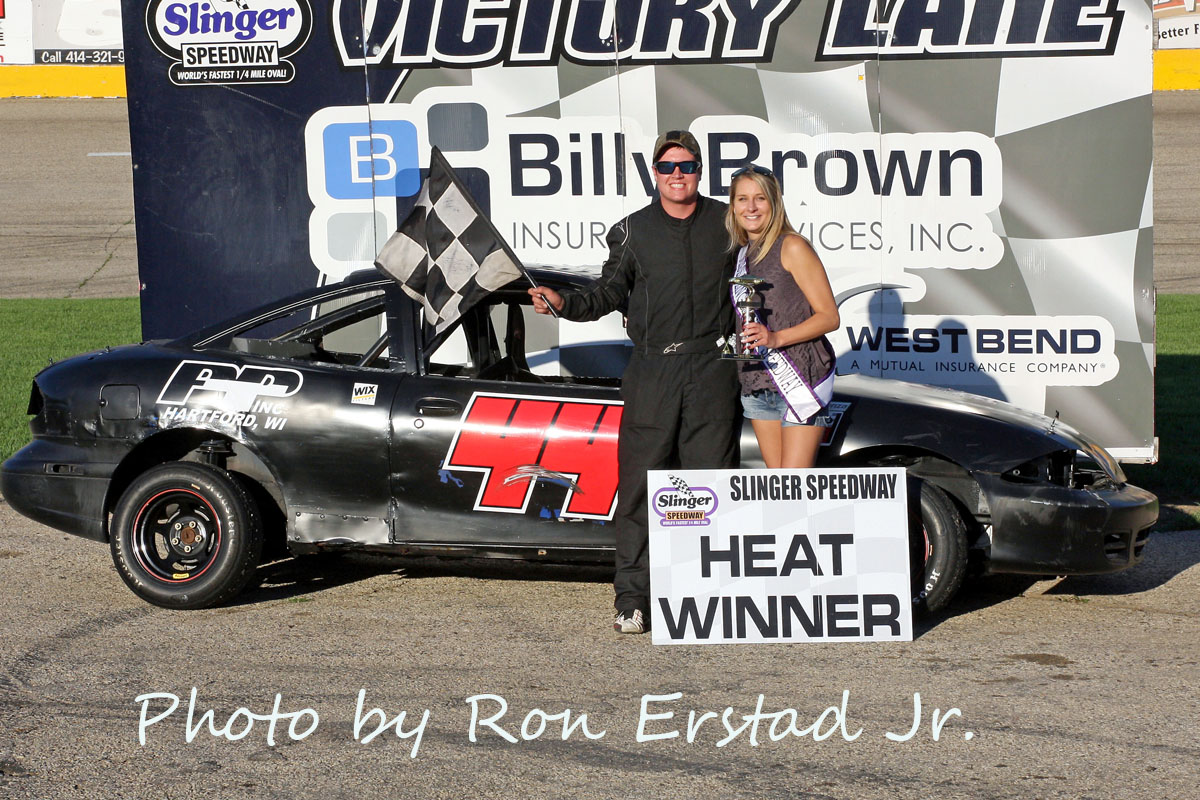 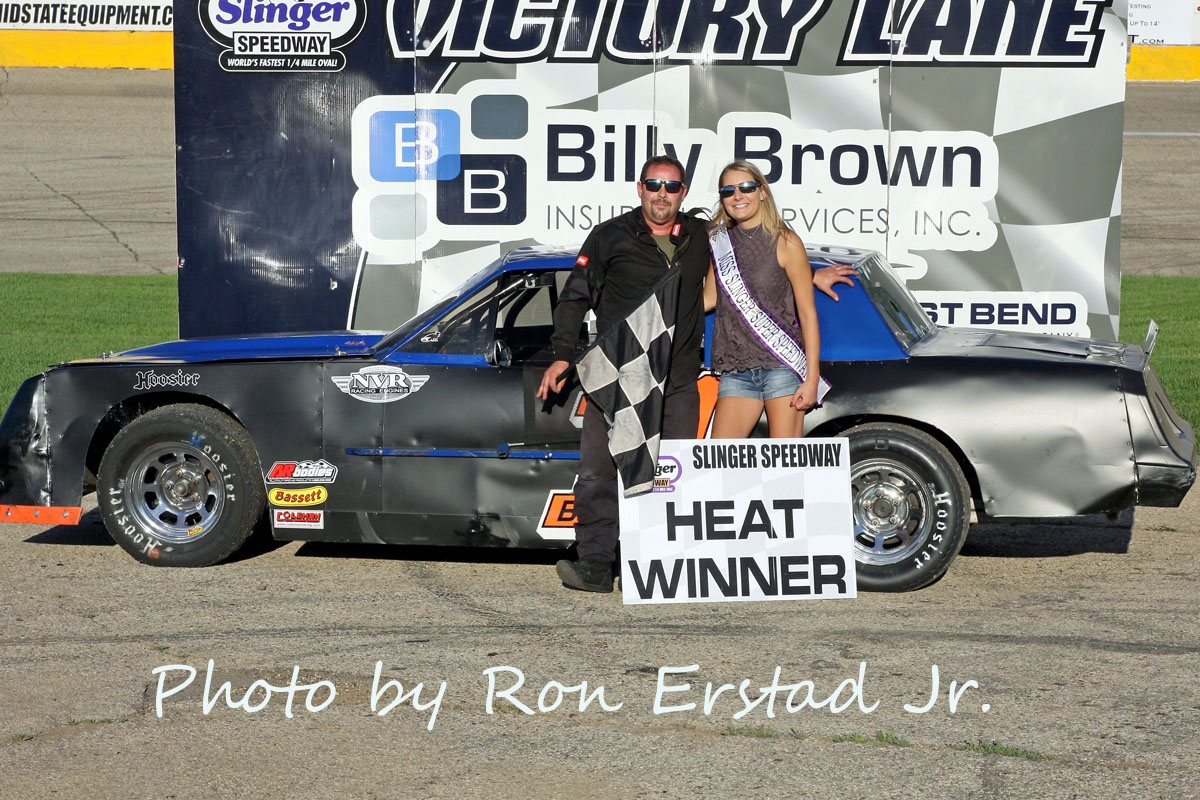 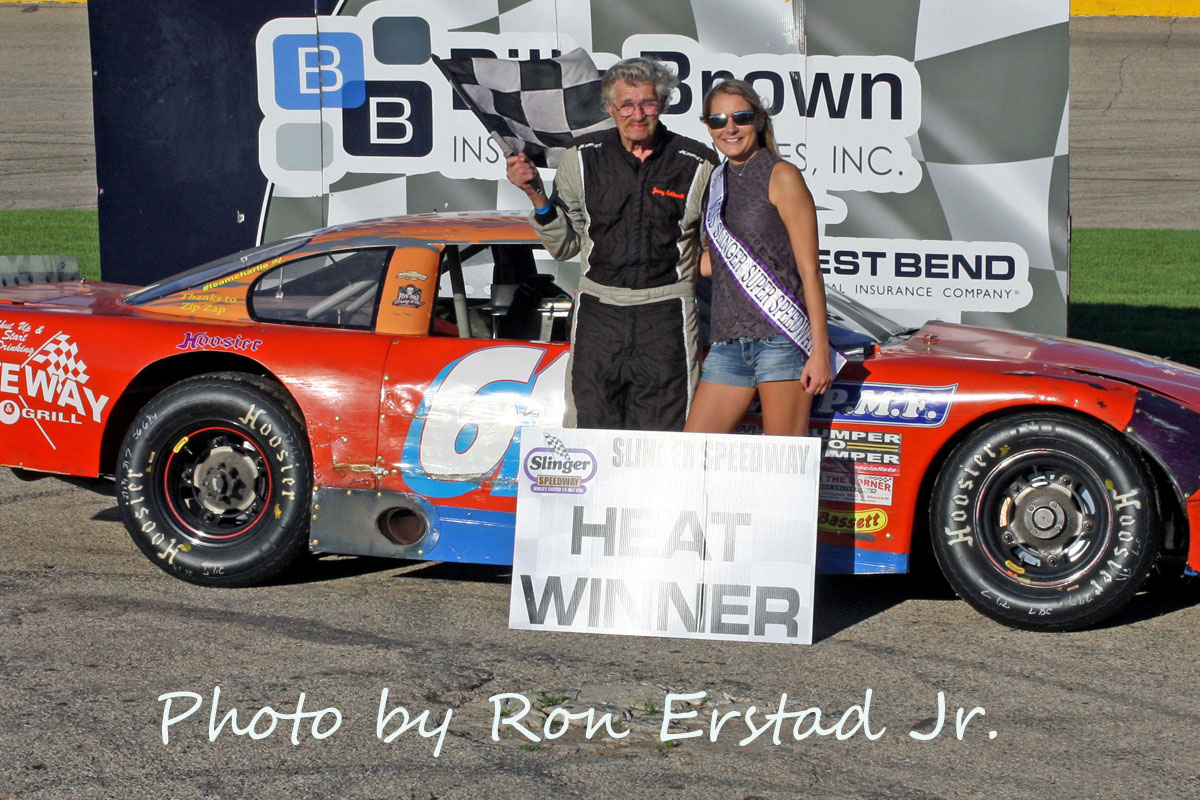 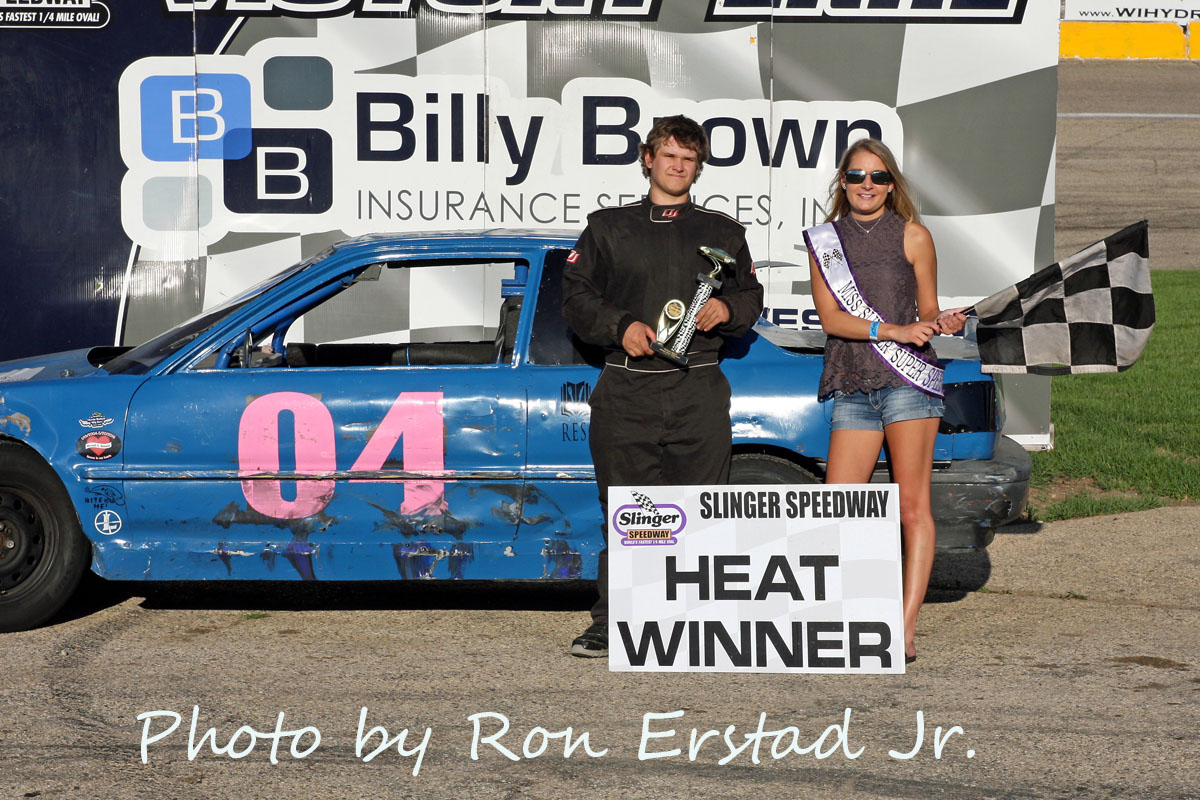 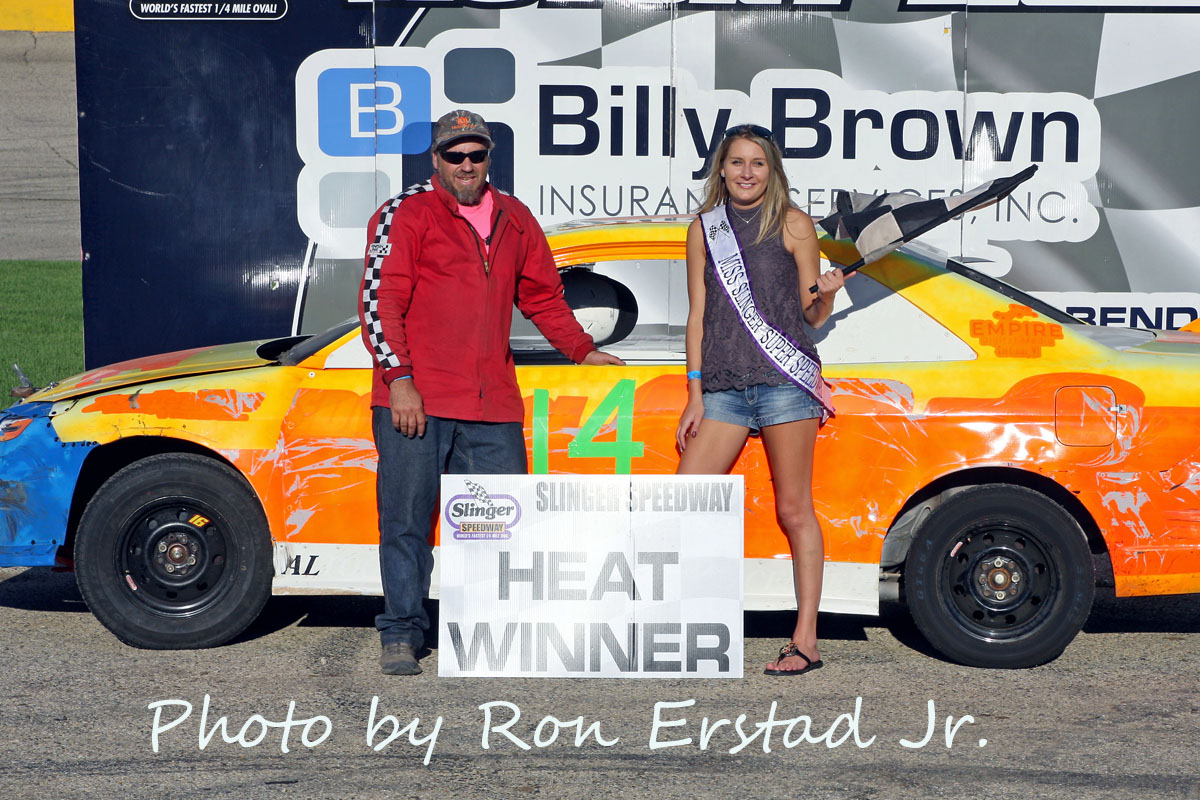 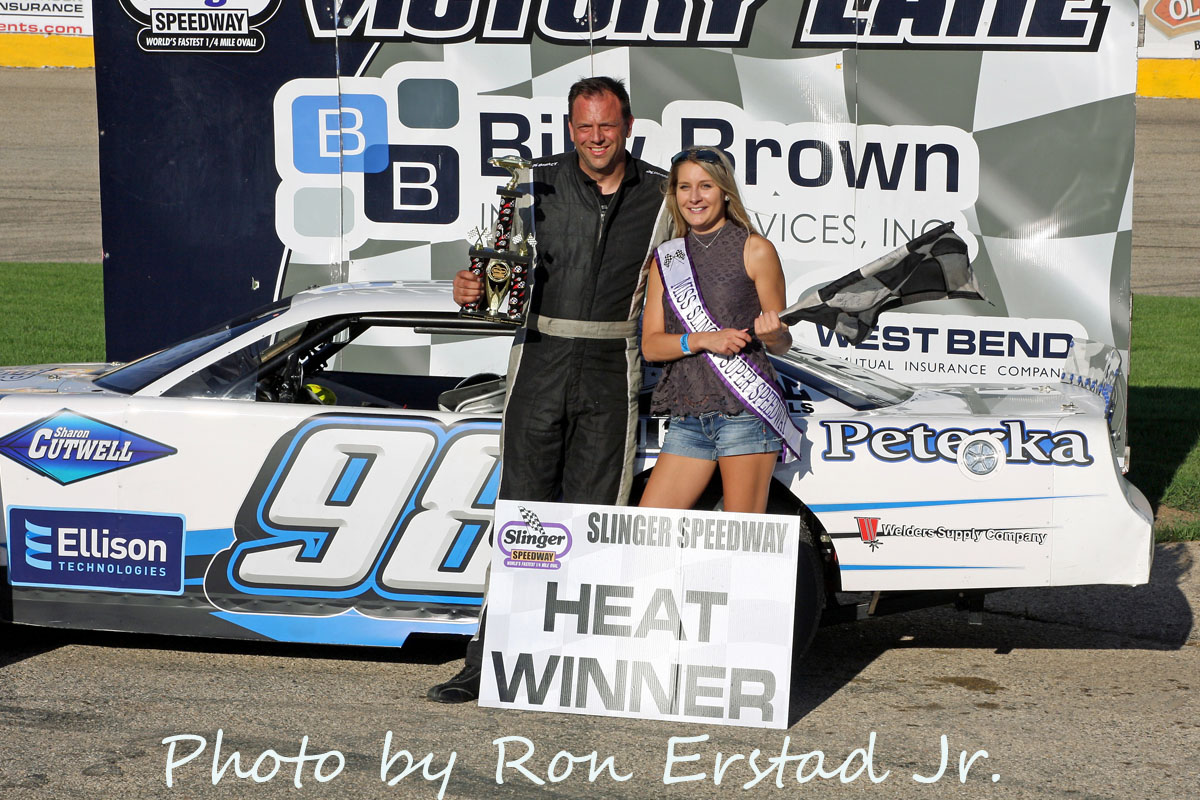 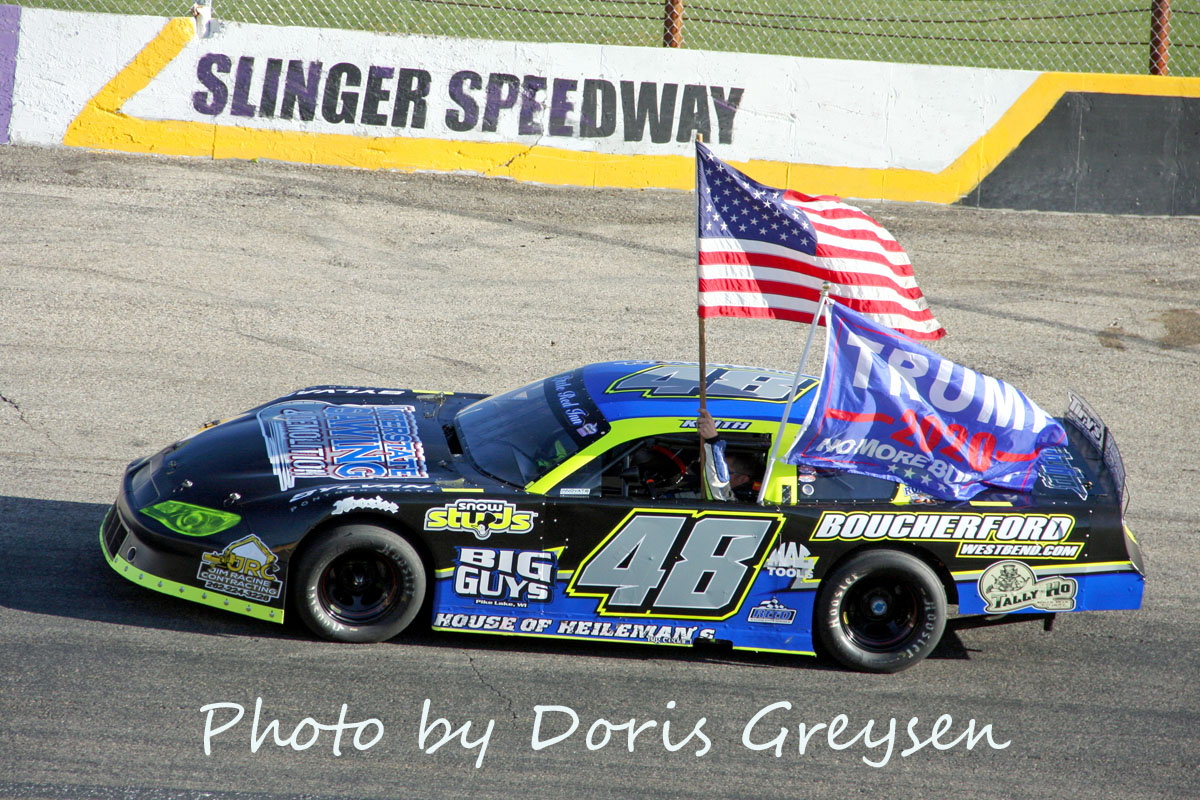 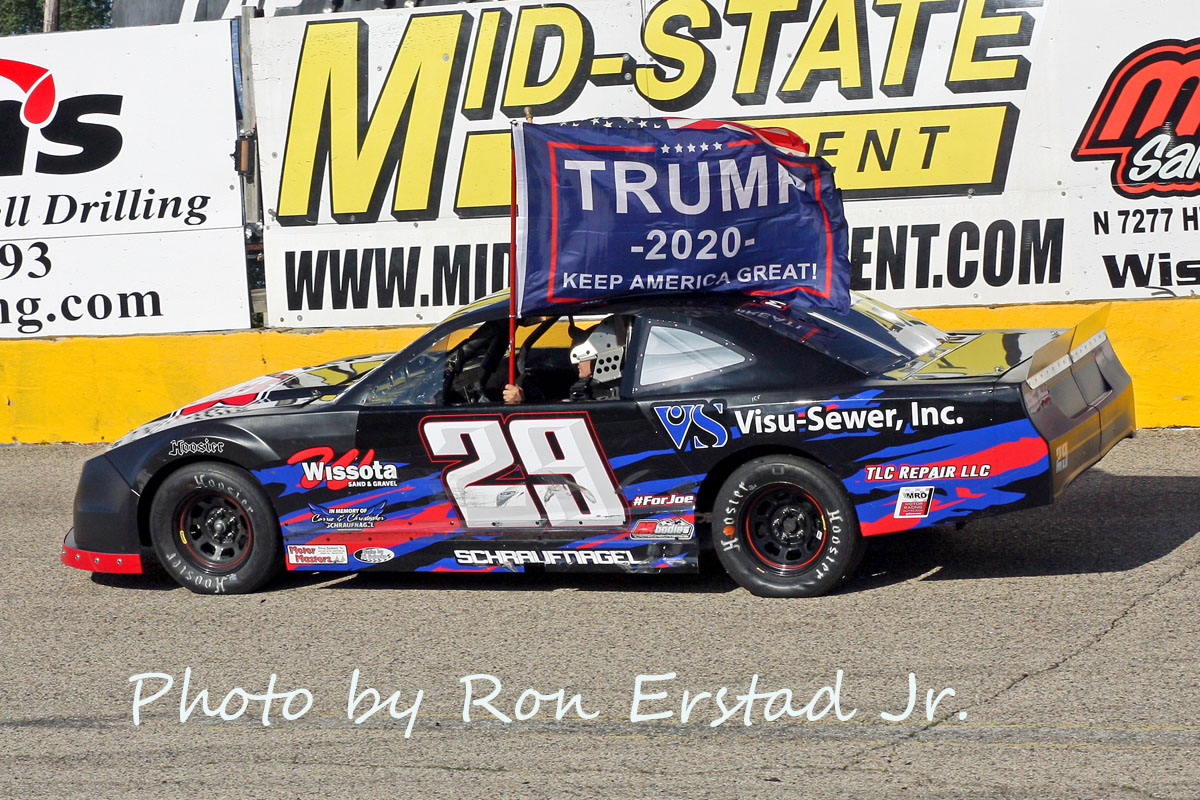