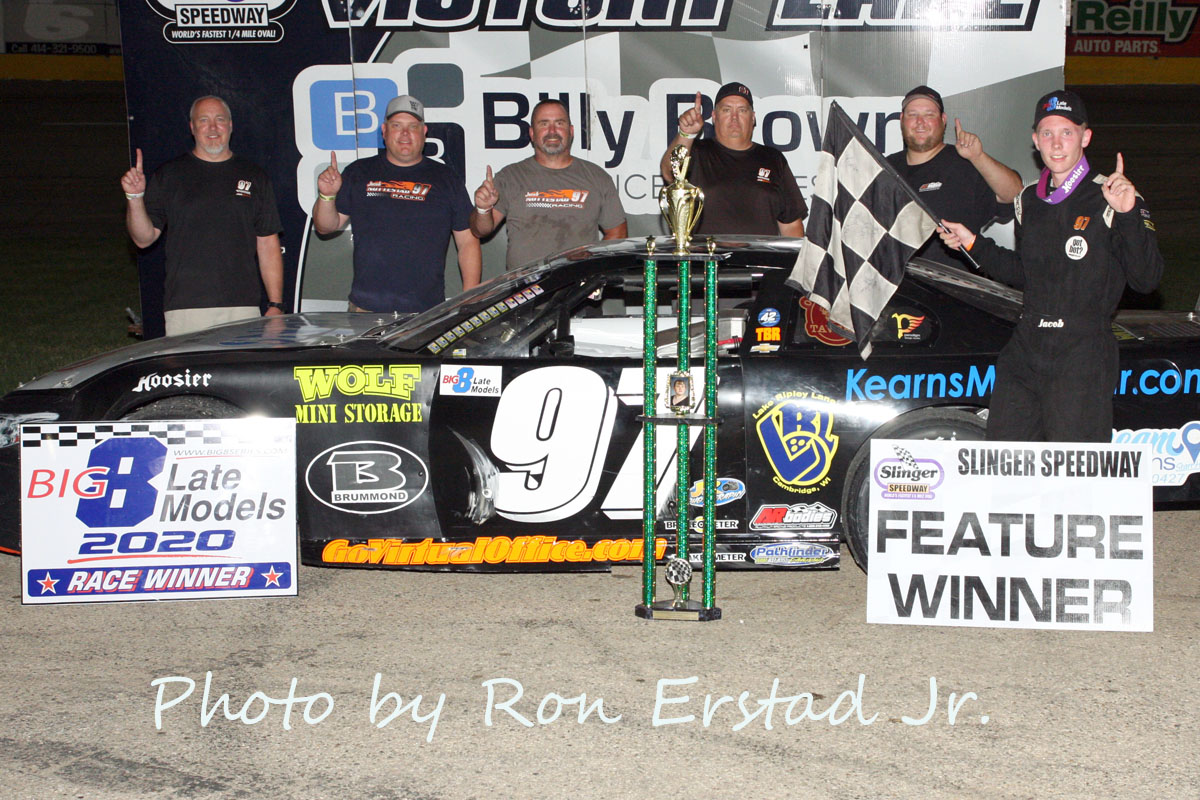 “The car really came to life after the halfway mark,” Nottestad stated from victory lane, “We were loose the first run and tight in the second run and tight was the way to go because everyone was going to burn their right rear (tire) off.” “I’ve got an advantage because my dad used to race here (2006 track champion Scott Nottestad), “Nottestad continued, “Because of his experience and he’s the smartest man out there no doubt.”

“I had a really good car the first half and I was holding back and that may have actually hurt me,” second place finisher Ryan Gutknecht stated afterwards, “because I didn’t really know what I had because I wasn’t pushing it.” “I’ve got to thank my crew though because they had a long week working on that car and switching everything over. That was some good hard fought racing.”

“I just put everything I had out there at the beginning of the race and at the end of the race there I was just holding on,” Egan said after leading a total of 13 laps before taking the checkered flag in third,” We were out front for a while and it was good hard racing which is why we come to Slinger.”

Dan Church set the pace on the opening lap as the caution flag quickly waved when Jonah Frederickson’s car spun in turn three. Church continued to lead on the restart as Ryan Gutknecht, Cole Thomas, Nick Egan, and Tom Gille all raced near the front. Gutknecht caught Church and began to challenge for the lead, taking the top spot on lap 8 just before the caution flag waved again on lap ten when the cars of Jeff Holtz and Jerry Mueller got out of shape while racing for position and sent Tom Berens for a spin off turn four. Gutknecht set the pace as racing resumed while Thomas and Egan worked their way around Church to take over second and third place while Ryan Craine challenged Church for fourth place. Hard racing behind the leaders resulted in cars suddenly slowing and in the jam up, Jeff Holtz’s car down the front stretch off turn four producing a caution flag on lap 21. Chaos broke loose on the restart as the fourth place car of Church suddenly spewed smoke and fluid entering turn one and slammed hard into the turn one wall, taking the cars of Zach Prunty, Tom Gille, Rich Jaskinski, and Jerry Eckhardt with him. The cars of Church and Prunty came off the ground briefly as a result of the hard hits and all cars involved with the exception of Eckhardt were too damaged to continue. Gutknecht continued to show the way as racing resumed while Nick Egan was able to sneak around Cole Thomas for second. Jacob Nottstad had workd his way into the third spot just ahead of Ryan Craine and Max Kahler as the caution flag waved again for the scheduled lap 44 half-way break.

Following a ten minute time period for the crews to adjust on the cars, racing was underway again and Gutknecht was able lead four more laps before Nick Egan worked his way into the lead on lap 49. Egan began to pull away slightly as Gutknecht found himself in a battle with Nottestad whose car appeared to improve as the race went on. Nottestad was able to catch Egan by lap 60 and following a brief battle, took command of the race on lap 63. Egan fell back into the clutches of Gutknecht who challenged for second while Nottstad distanced himself in the lead. Gutknecht was able to take the spot from Egan and then was able to close the gap between himself and Nottestad on lap 70 when Jeff Holtz’s car suffered a flat tire and came to rest on the speedway. Nottestad would not be denied however and he paced the final laps to take the victory while Gutknecht held off Egan to claim the second spot, leaving Egan to settle for third. Max Kahler finished fourth and Tom Berens rebounded from his earlier incident to finish fifth. Mitchell Haver took the checkered flag in sixth followed by Jerry Eckhardt and Tyler Hromadka in seventh and eighth respectively. Jeff Holtz and Matt Klenz rounded out the top ten finishers.

Late model heat race victories were claimed by Cole Thomas, Tom Gille, and Jerry Eckhardt while Max Kahler was the fastest qualifier after touring the speedway in 12.183 seconds.
The hobby stock division made it’s first appearance of the season at Sligner and Jim Tate Jr, won the 25-lap feature.

Tate took the lead on lap 14 and drove to the victory over Jordan Egli who led the first 13 laps before finishing second. Chris Flairty finished third while Jamie Tate and Nick Oxborough completed the top five in fourth and fifth respectively. Ken Scott and Jordan Egli each won a hobby stock heat race and Chris Flairty was the fastest qualifier with a lap at 13.852 seconds.

After nearly scoring the victory a week ago, Misty Benn drove to her first Slinger Bee feature victory by holding off Brady Held in the 25-lap main event. Carl Benn finished third ahead of Brandon Tackes and Paul Reagles. Misty Benn and Brady Held also each won a Slinger Bee heat race and Tom Elsinger Jr. set fast time with a lap at 15.203 seconds.

Justin Okruhlica won the modified feature which was declared over after 27 of the scheduled 30 laps were completed due to time limit constraints. Braden Berge finished second while Bill Tandetzke, Mike Sandholm, and Bill Prietzel completed the top five finishers. Mike Sandholm won the modified heat race and Bill Prietzel was the fastest qualifier after circling the speedway in 12.270 seconds.

James Poleske drove the Finish Line Bar and Grill entry to victory in the Bar Car race and Bill Shavlik brought home the victory in the Figure 8 race. 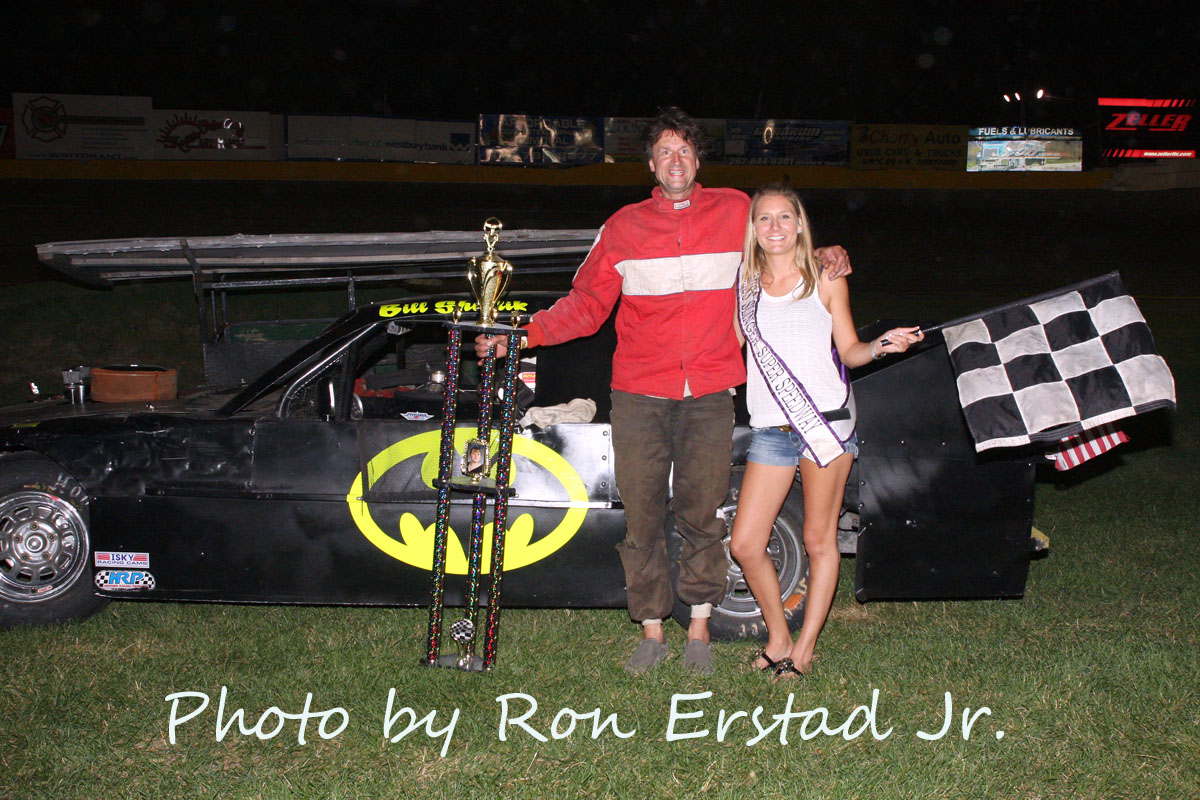 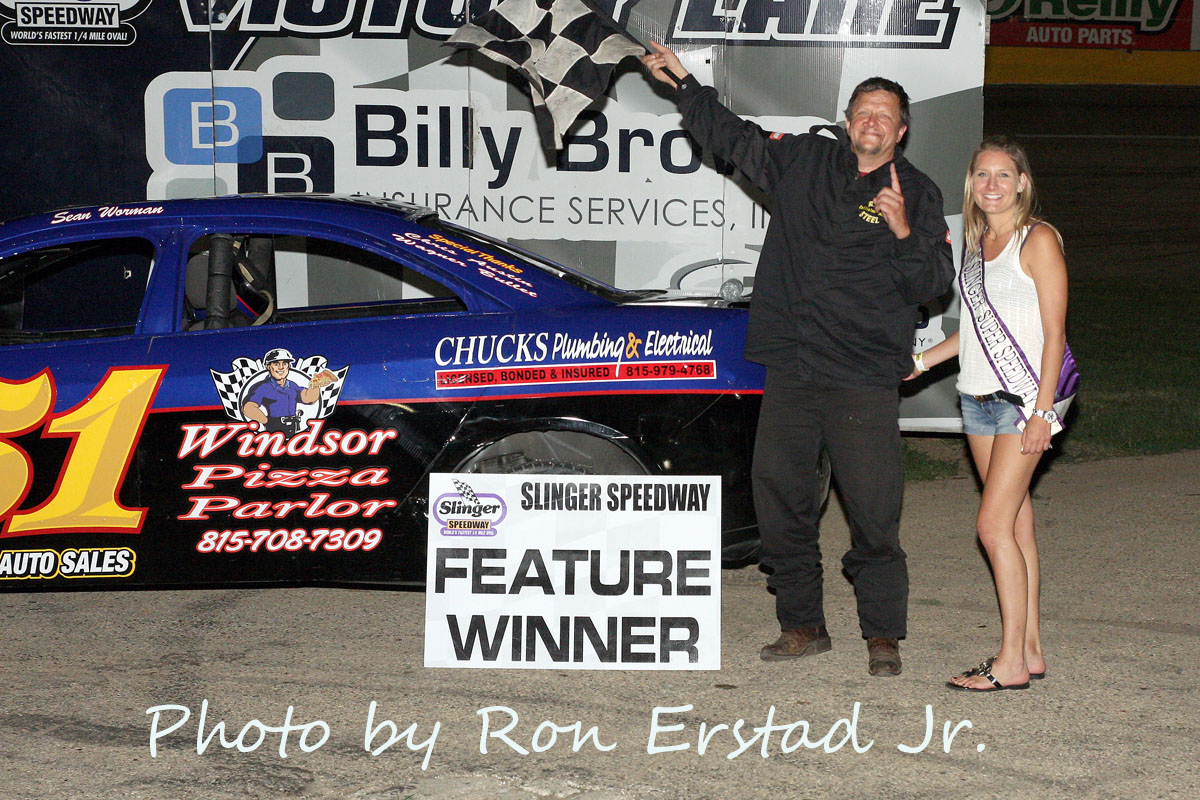 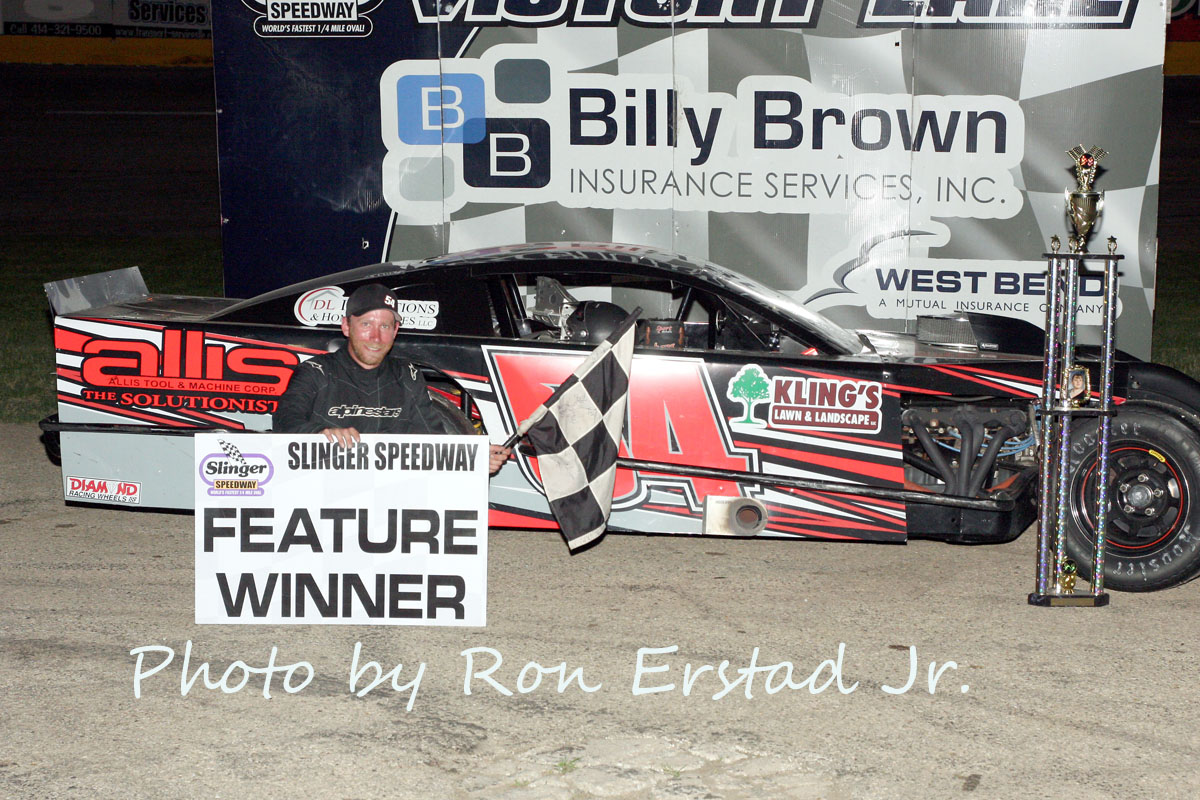 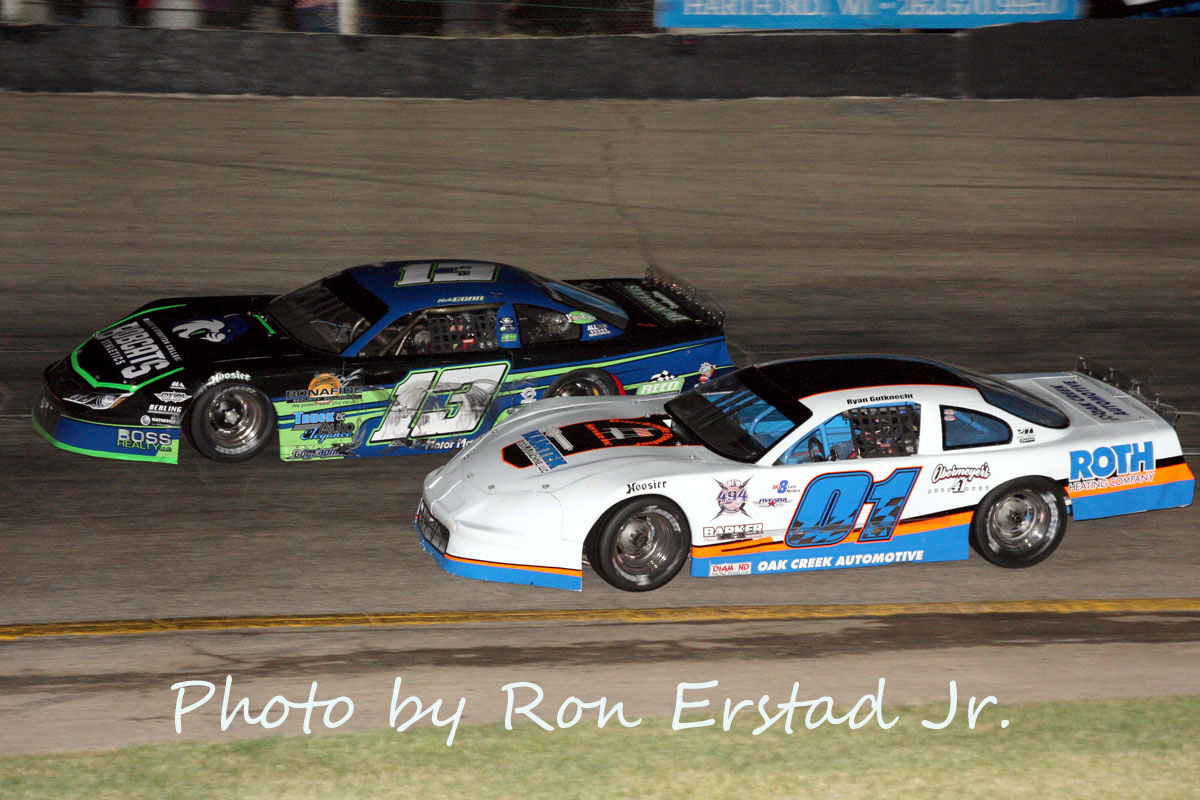 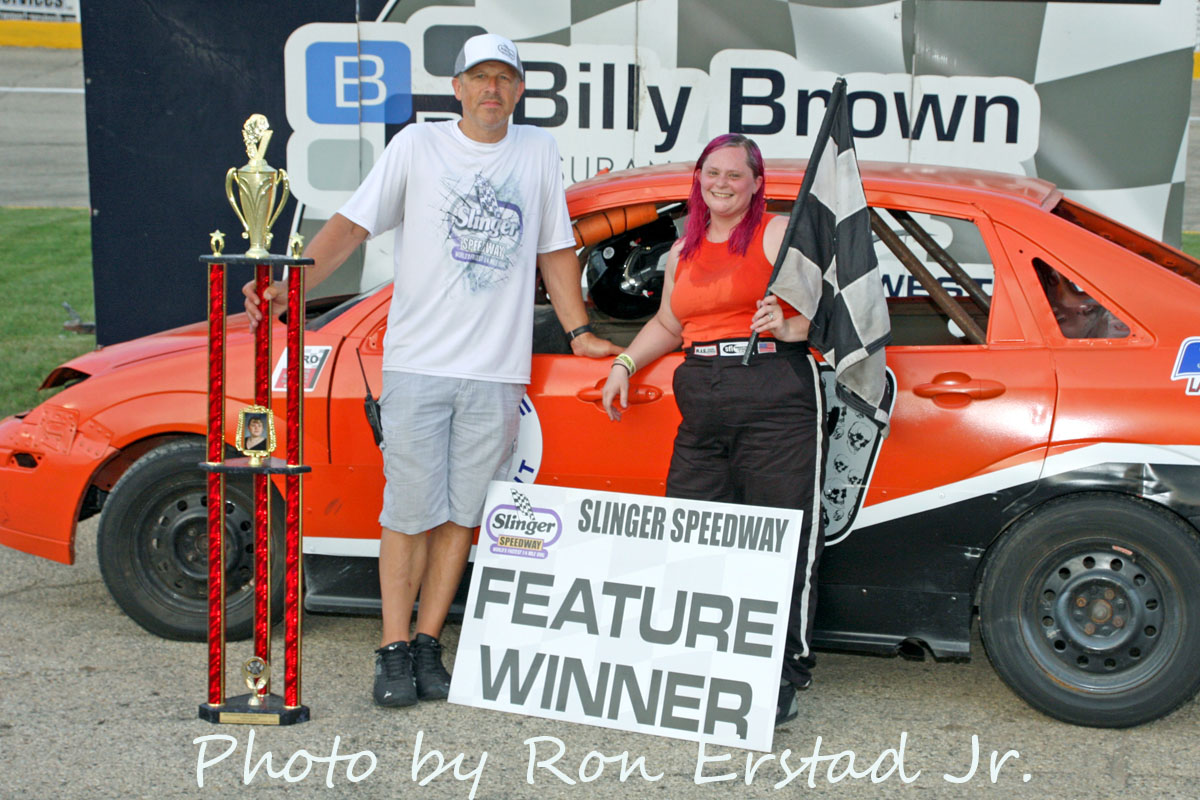 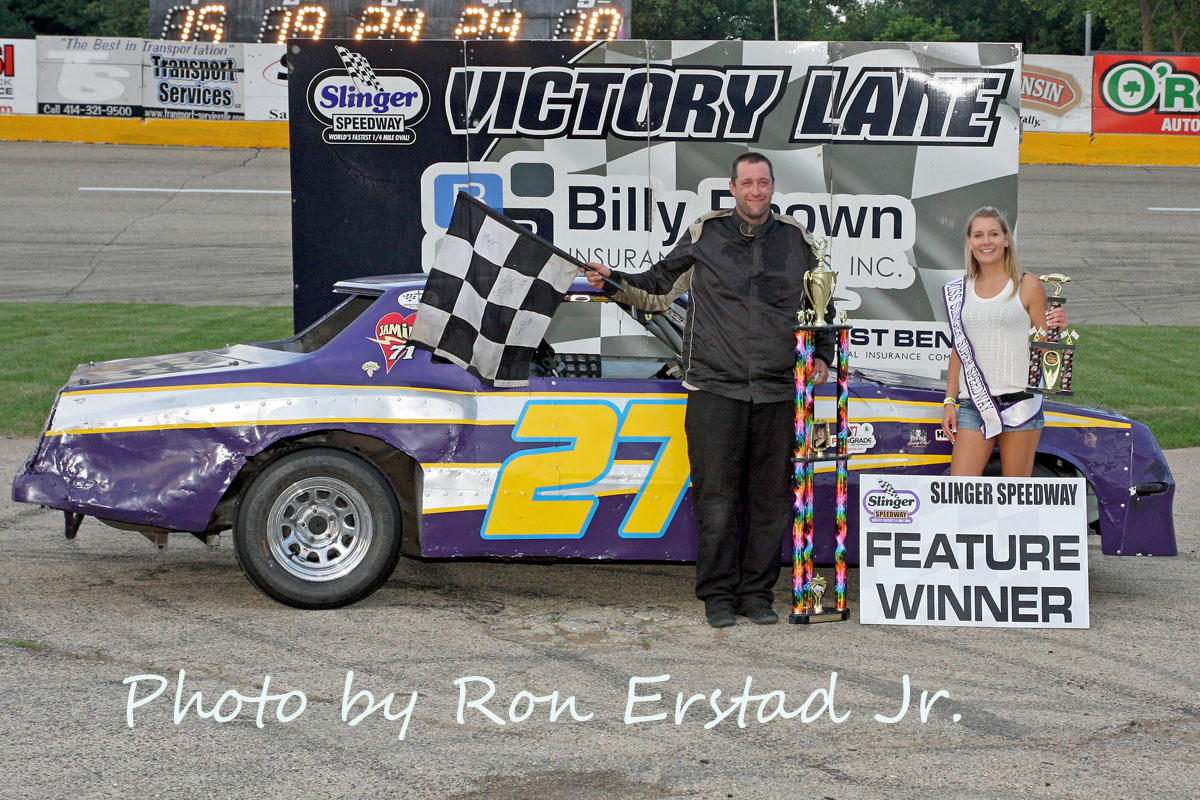 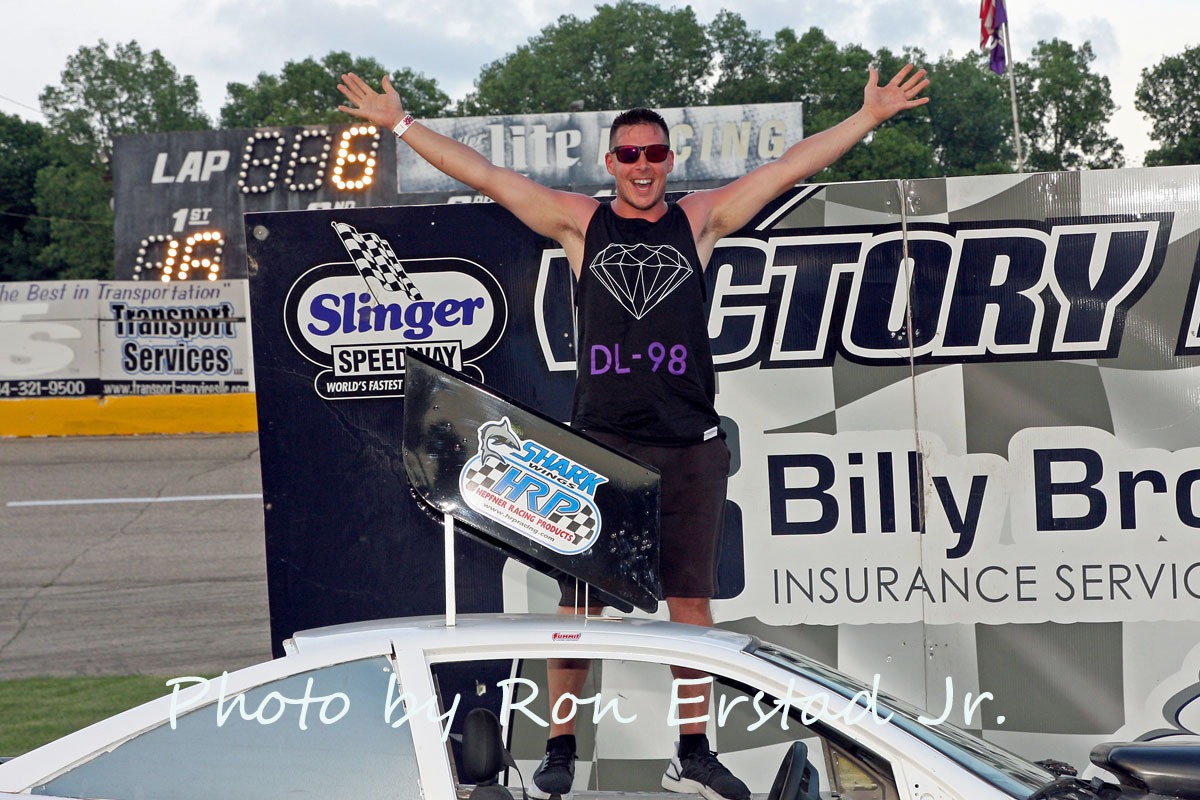 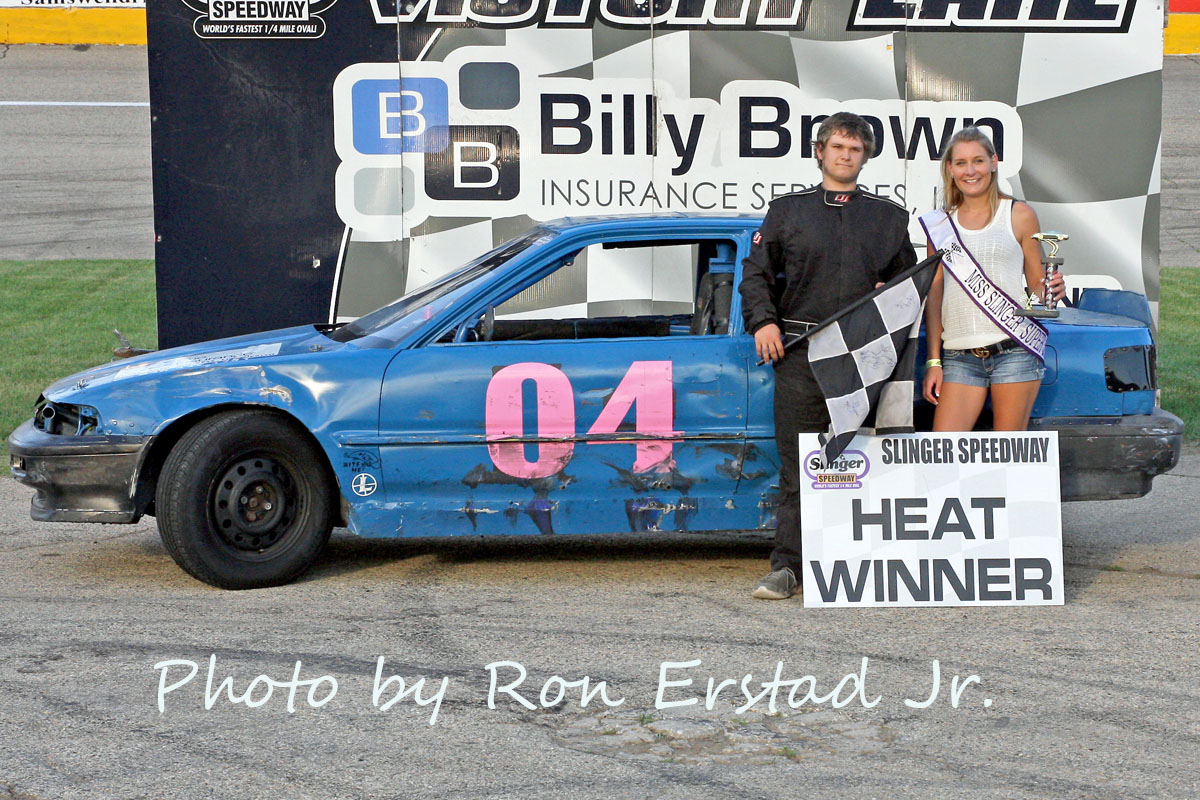 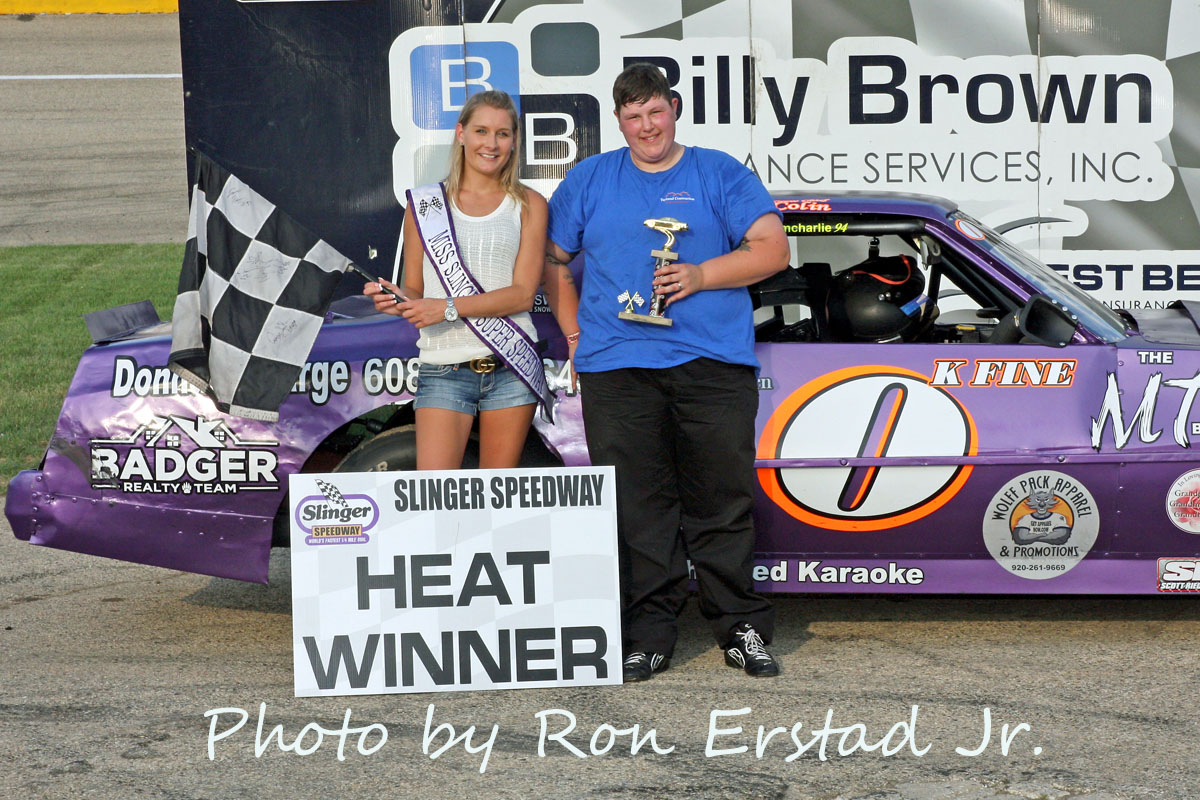 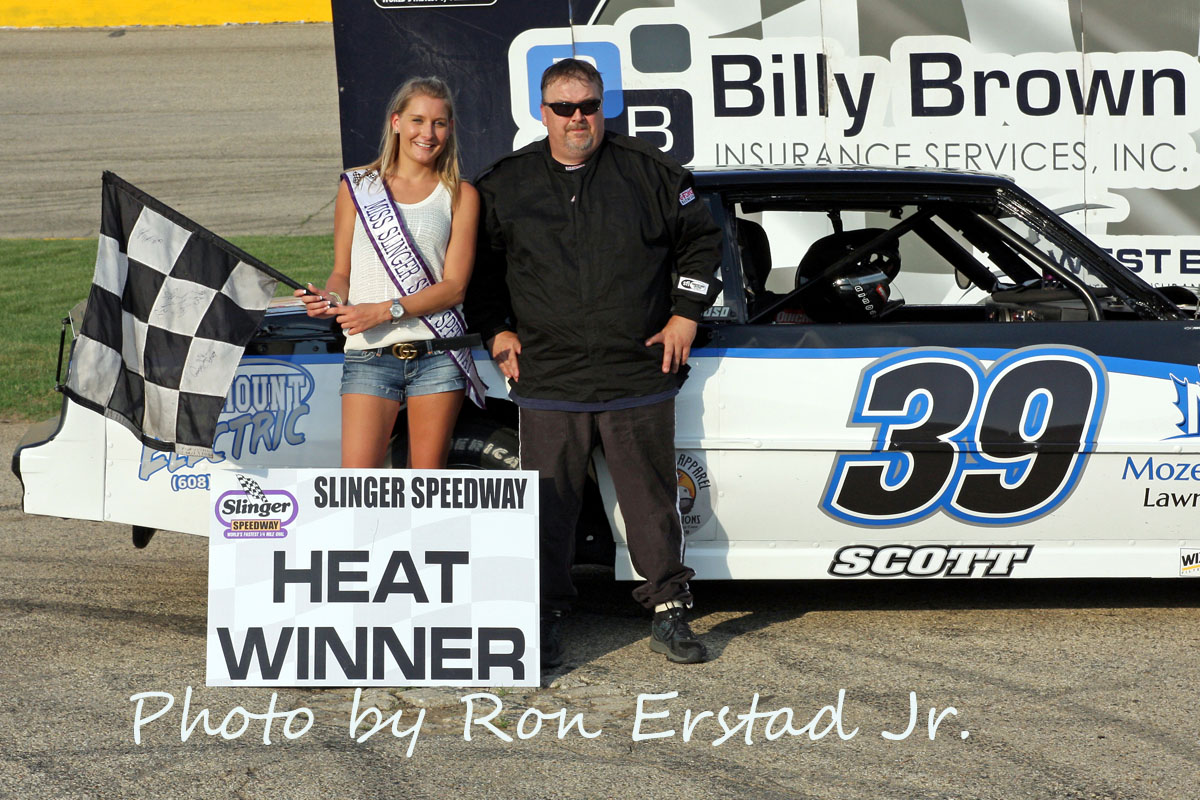 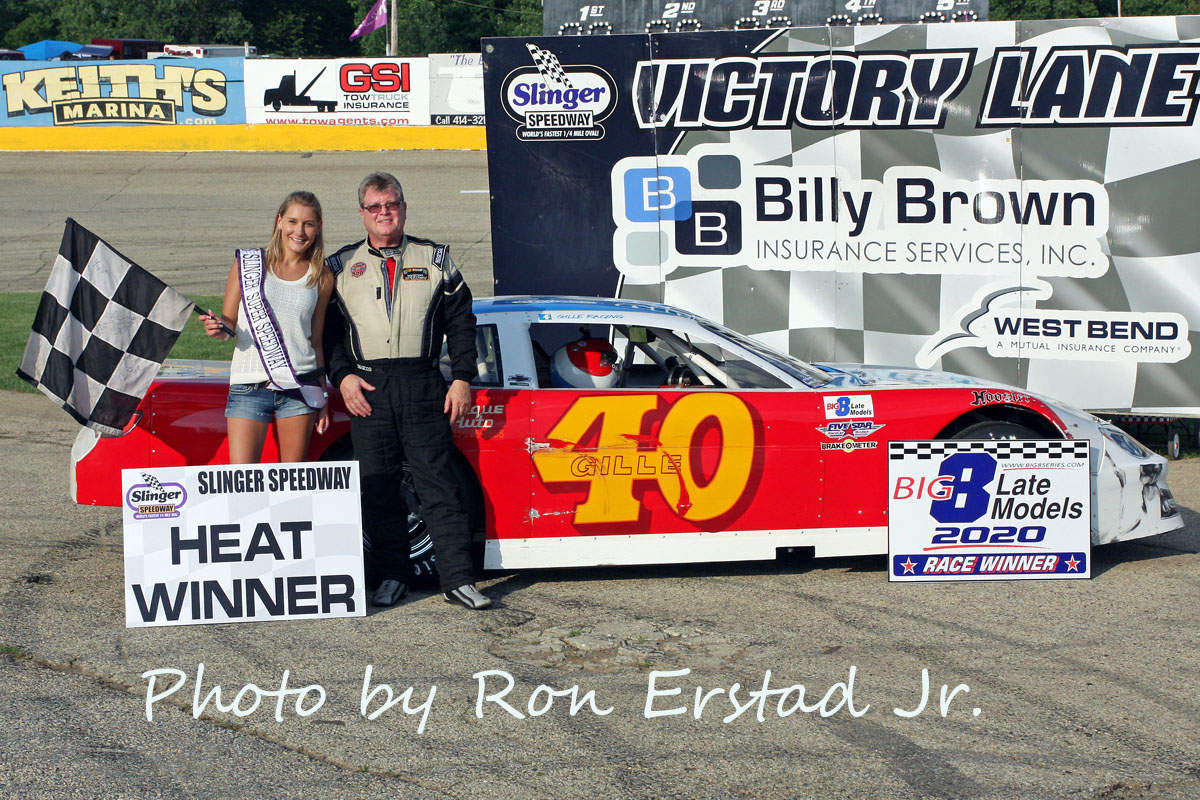 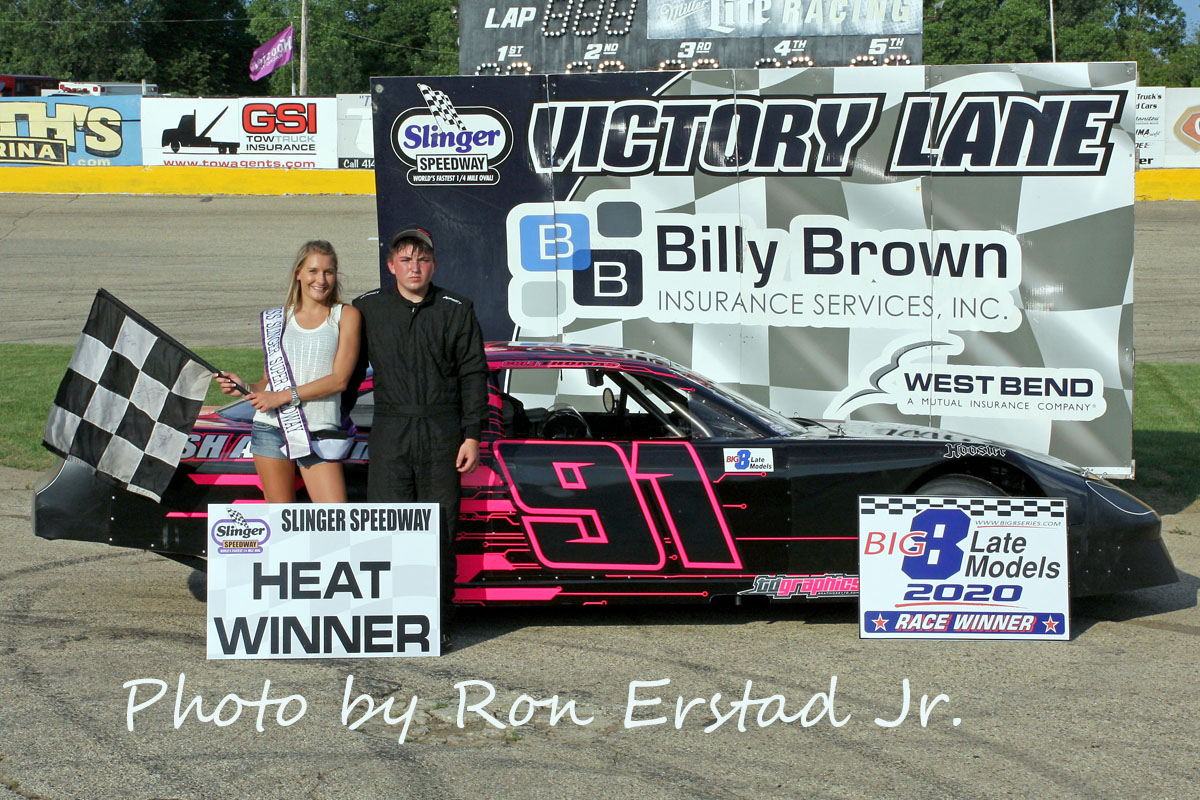 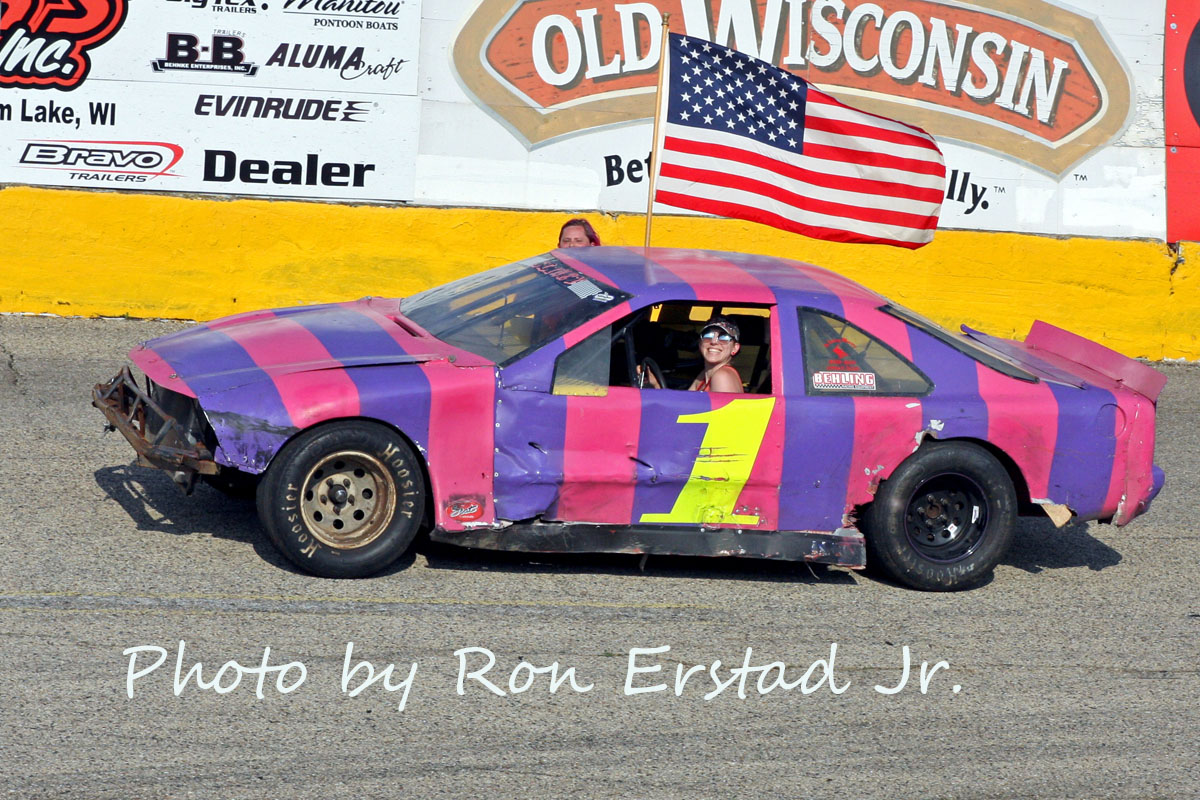 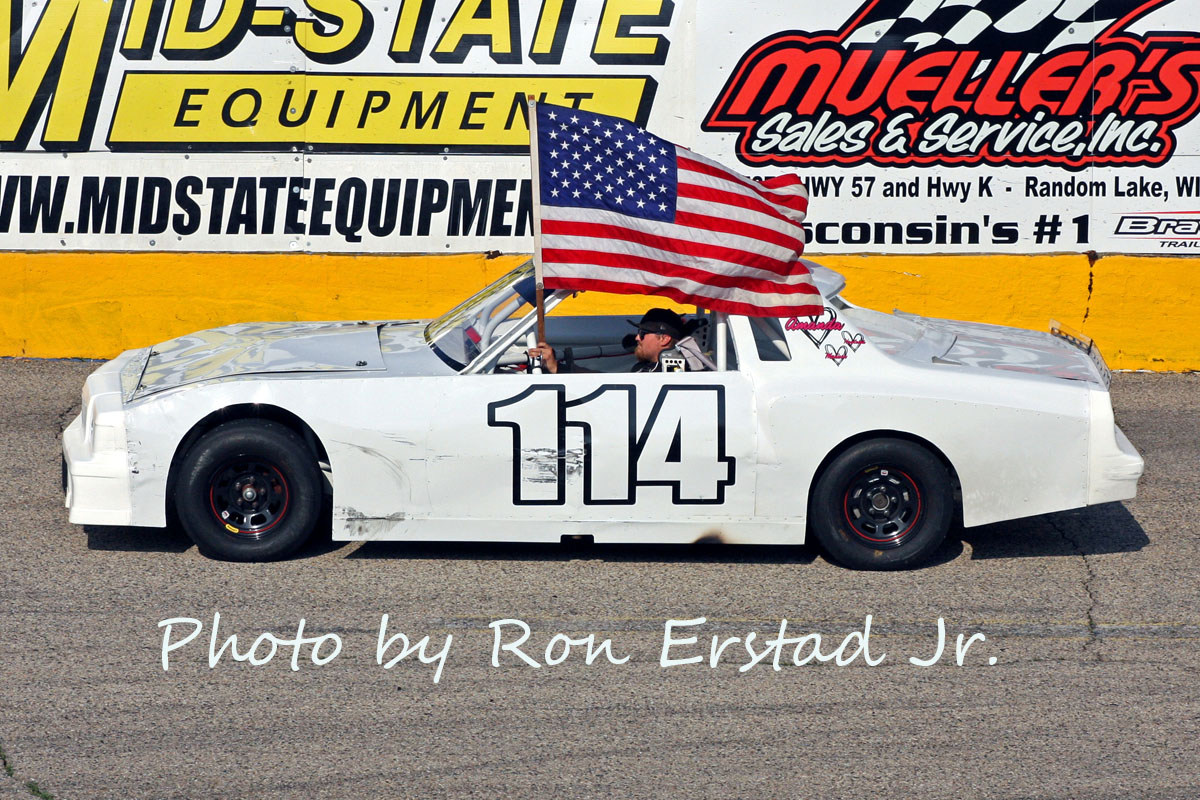 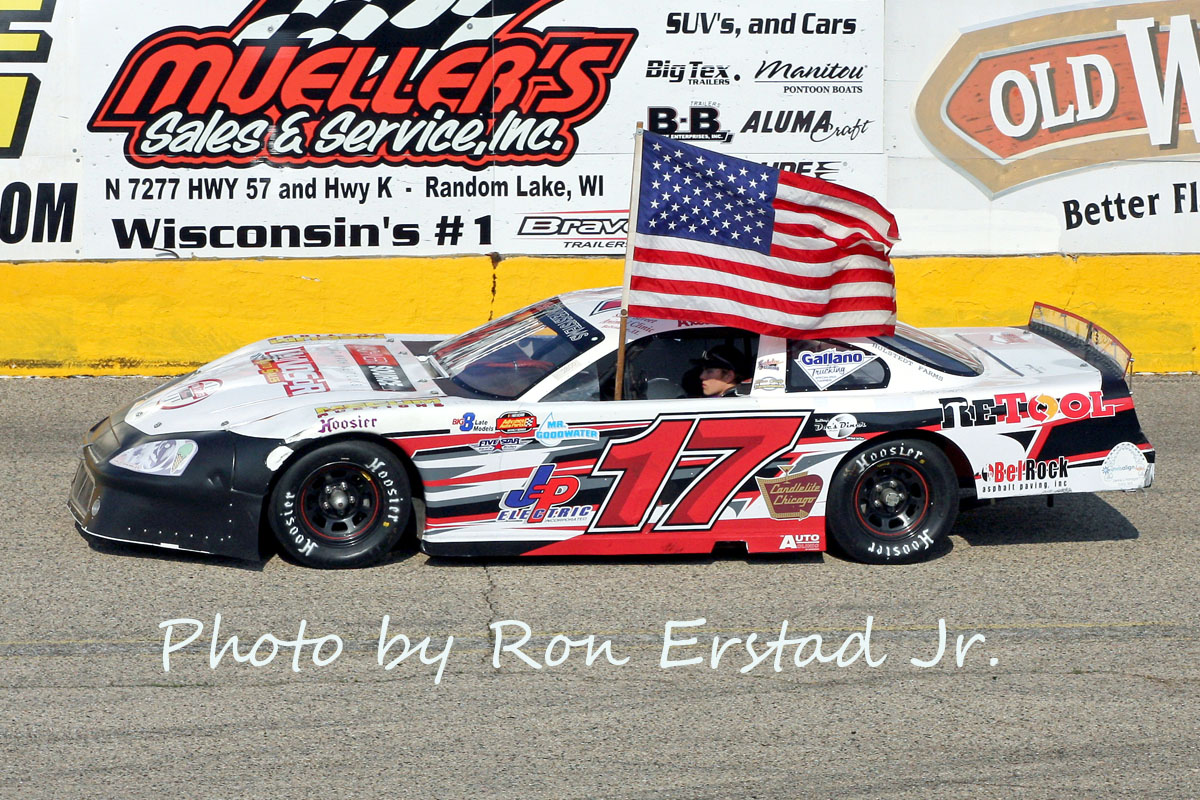