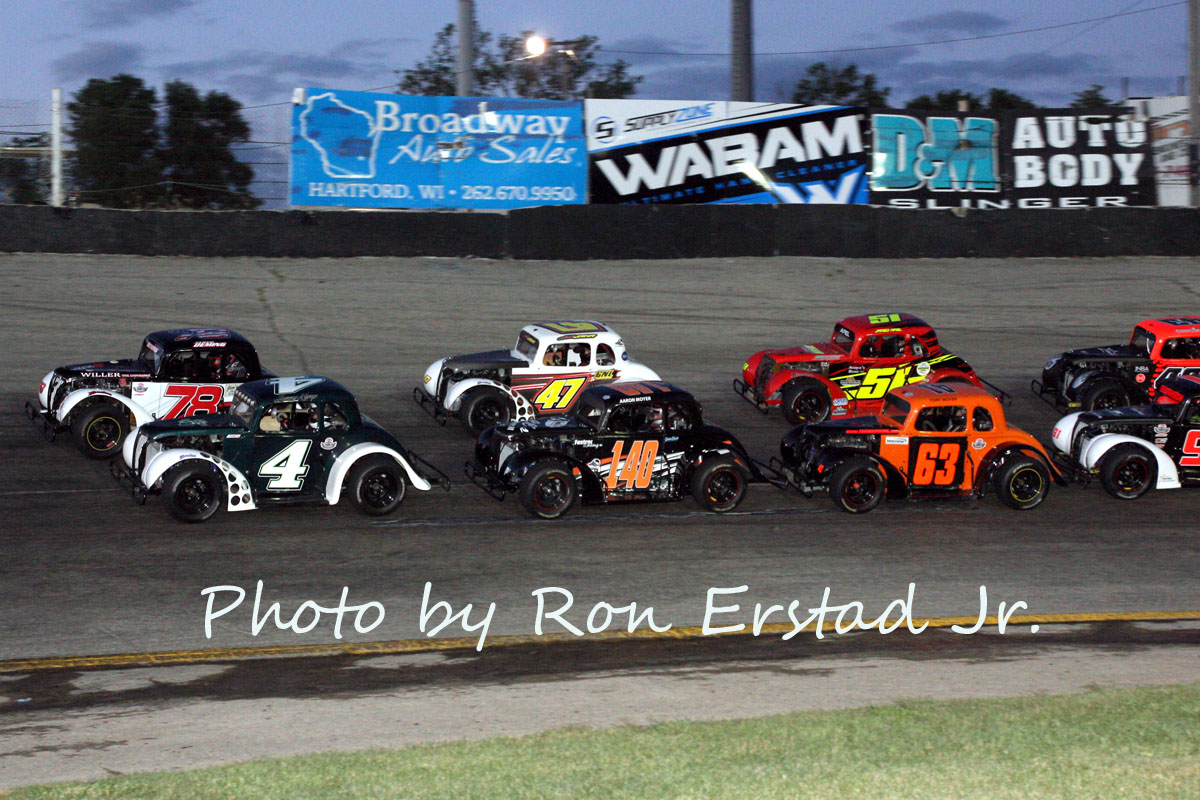 Stark captured the victory in the Super Beez division feature while Swanson took top honors in the Legends main event. Tackes was the winner of the Slinger Bees feature while Rose and Hartwig were the winners of the American Super Cup Series and Bandolero main events respectively.

Phil Malouf paced the opening laps of the 30-lap Super Beez feature as he led the first ten circuits that included the only caution flag of the event on lap three when Todd Buckley and Steve Zoromski tangled in turn two. Malouf fended off challenges from George Sparkman and Scott Hoeft before Kyle Stark picked his way through the field and moved into second by lap ten. Stark charged into the lead on lap 11 and began to edge away as Nick Schmidt advanced to join the top five. Schmidt worked his way into the second spot but was unable to catch Stark who drove to the victory. Schmidt finished in second place followed by Malouf who took the checkered flag in third.

“We had to dodge a few bullets out there but in the end it ended up working alright,” Stark stated from victory lane, “It’s always a blast to get out front and just ride it out and do my thing.”

“It was an alright night and I don’t know what happened towards the end but I think it knocked my tow out on the car pretty good,” Schmidt said, describing his experience in the race, “I could tell it wasn’t handling great but it was good enough I guess,”

“I’m pretty happy because I haven’t been here in a few years so this feels good,” said Malouf after his third place finish, “I’ve been busy traveling to races in Ohio, Michigan, and Indiana so it’s good to come back here.”

Al Strobel and Steve Zoromski were the winners of the Super Beez heat races and Kyle Stark set fast time by circling the speedway in 13.621 seconds.

Tristan Swanson took the lead on lap 16 and drove to the victory in the 25-lap Legends feature.

Aaron Moyer paced the beginning laps while Swanson and Austin Jahr raced for second place. Moyer maintained the lead over Jahr as the first caution waved when Jared Deming’s car looped around off turn four on lap 15, On the restart, Jahr’s front bumper hooked onto the rear bumper of Moyer’s car and with the cars stuck together, they both skated up the track in turn two as Tristan Swanson took the lead while the caution flag waved. On the first attempted restart, the hood fell off Jacob Nottestad’s car which prevented the green flag from waving and once racing resumed, the caution flag appeared once again. On lap 17, Jacob Nottestad’s car touched wheels with Michael Guderski’s car which sent Nottestad sailing through the turn two exit to the pits. Nottestad was able to maintain control and drive back around through the pits to rejoin the race without much damage. Once again, Swanson held the lead for the restart and he hit his marks as he led the final laps to take the victory. After their lap 15 incident Aaron Moyer and Austin Jahr put on a show for the crowd as they rocketed through the field to finish second and third respectively. James Lynch and Wayne Barlock rounded out the top five.

Michael Weber won the Legends semi-feature over Jeremy Reid and Griffin McGrath as they along with fourth place finisher Tim Morton transferred into the main event. Amanda Brockhouse finished fifth. Legends heat races were won by Amanda Brockhouse, Michael Weber, and Aaron Moyer. Tristan Swanson was the fastest qualifier after completing a lap in 13.438 seconds.
Brandon Tackes took the lead of the 25-lap Slinger Bees feature when early leader Paul Reagles experienced mechanical issues on lap 17 and then held off his father Marty Tackes to capture the win. Ricky Gebhard finished third ahead of Brady Held and Carl Benn in fourth and fifth respectively. Tom Elsinger Jr. finished sixth and Karter Stark was seventh. Misty Benn took the checkered flag in eighth while Brandon Mennicke and Tracy Neu were ninth and tenth respectively.

Nick Schmidt and Paul Reagles were the winners of the Slinger Bees heat races and Brady Held set fast time with a lap at 15.206 seconds.

Dylan Gagliano drove the Sidetracked of Oak Creek entry to victory in the Bar Car race while Zach Kaminsky was the winner of the Spectator Elimination races in his 1989 Pontiac Trans Am. 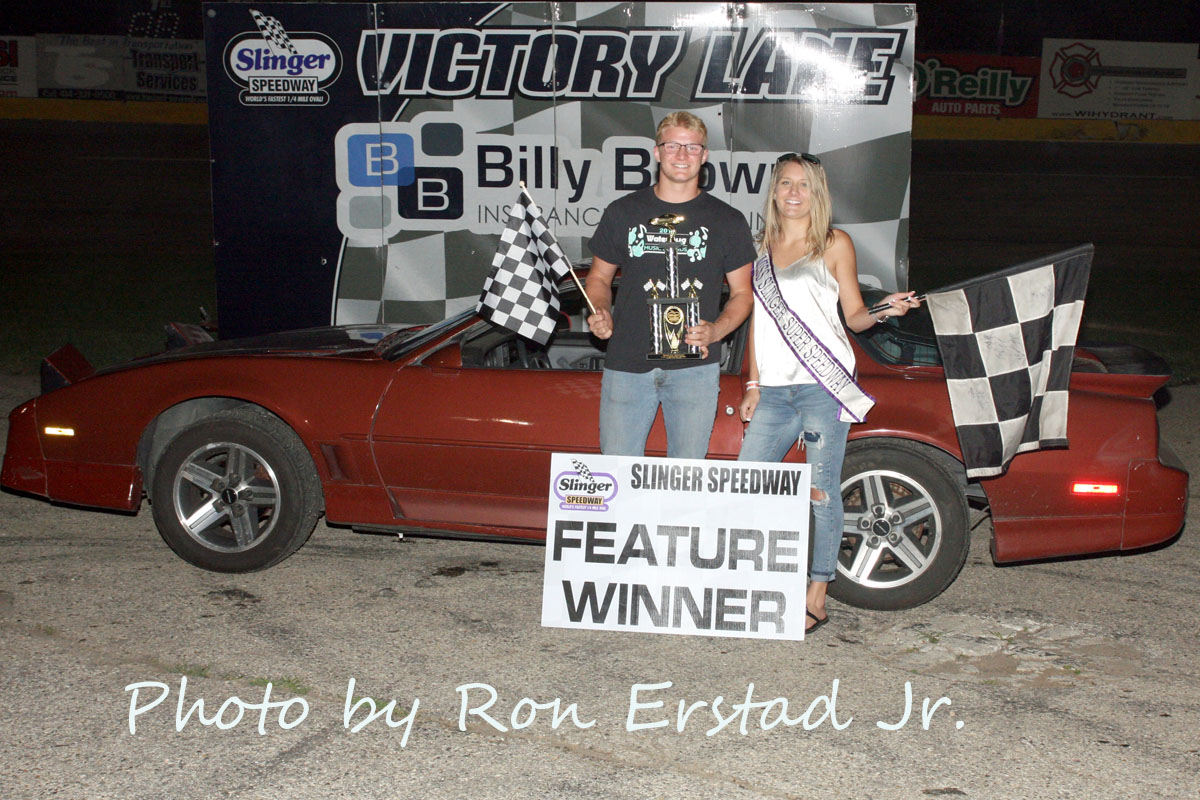 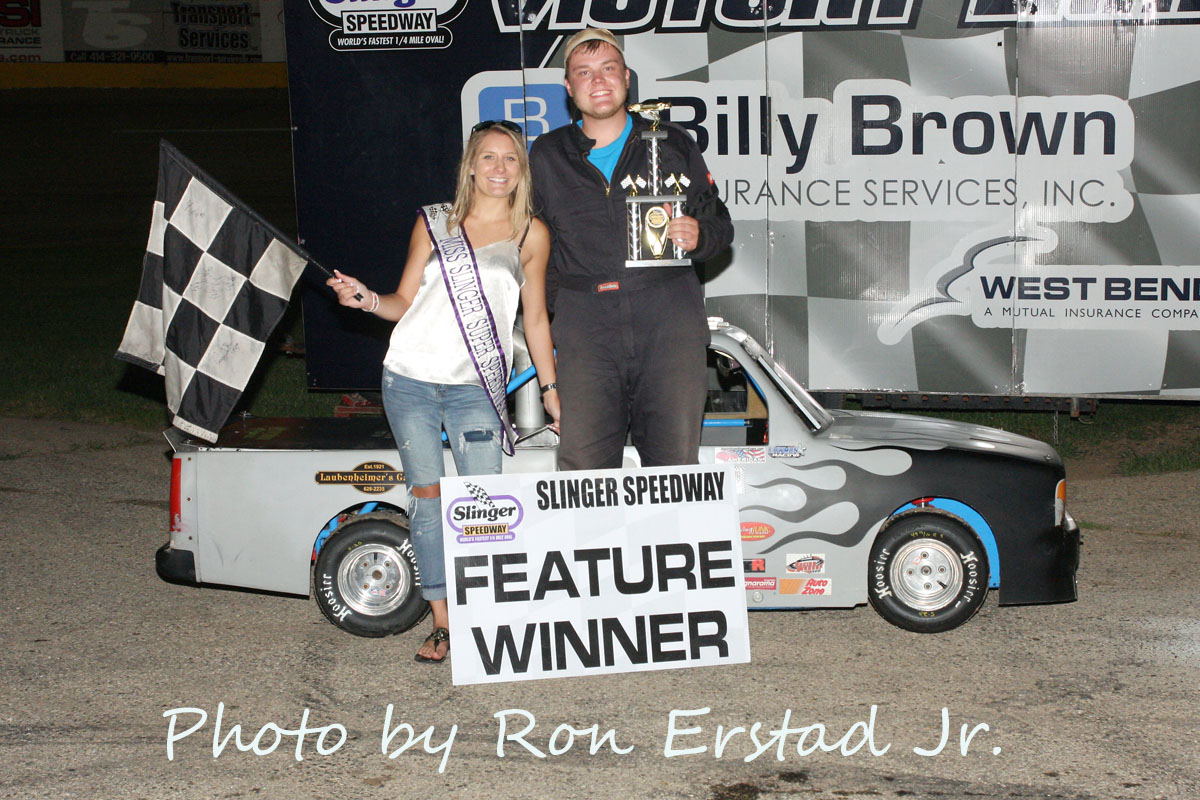 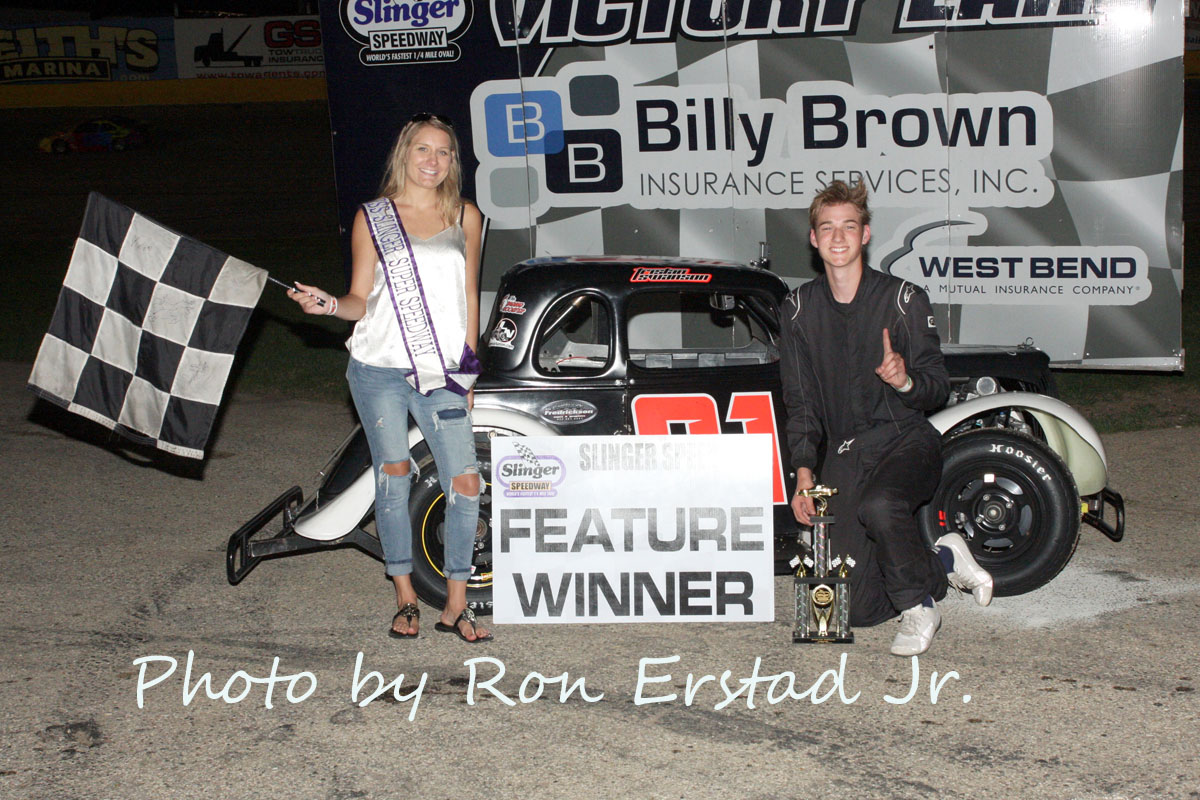 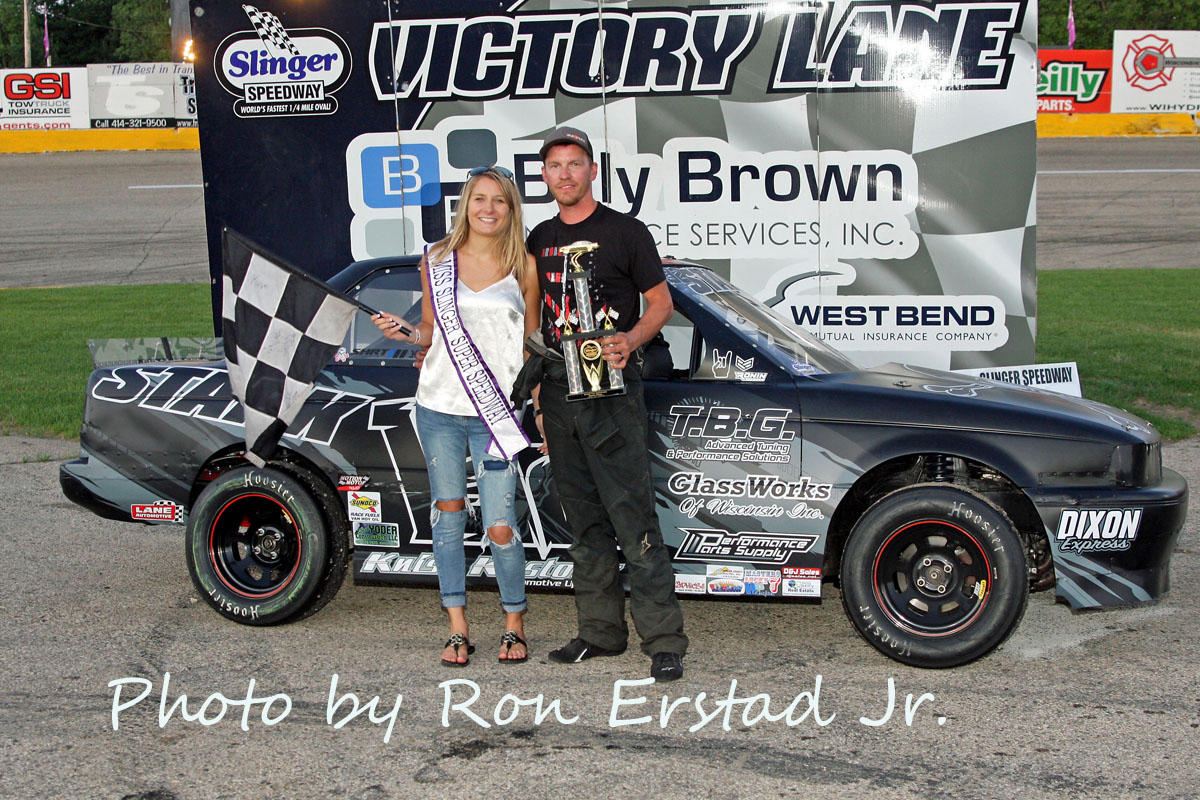 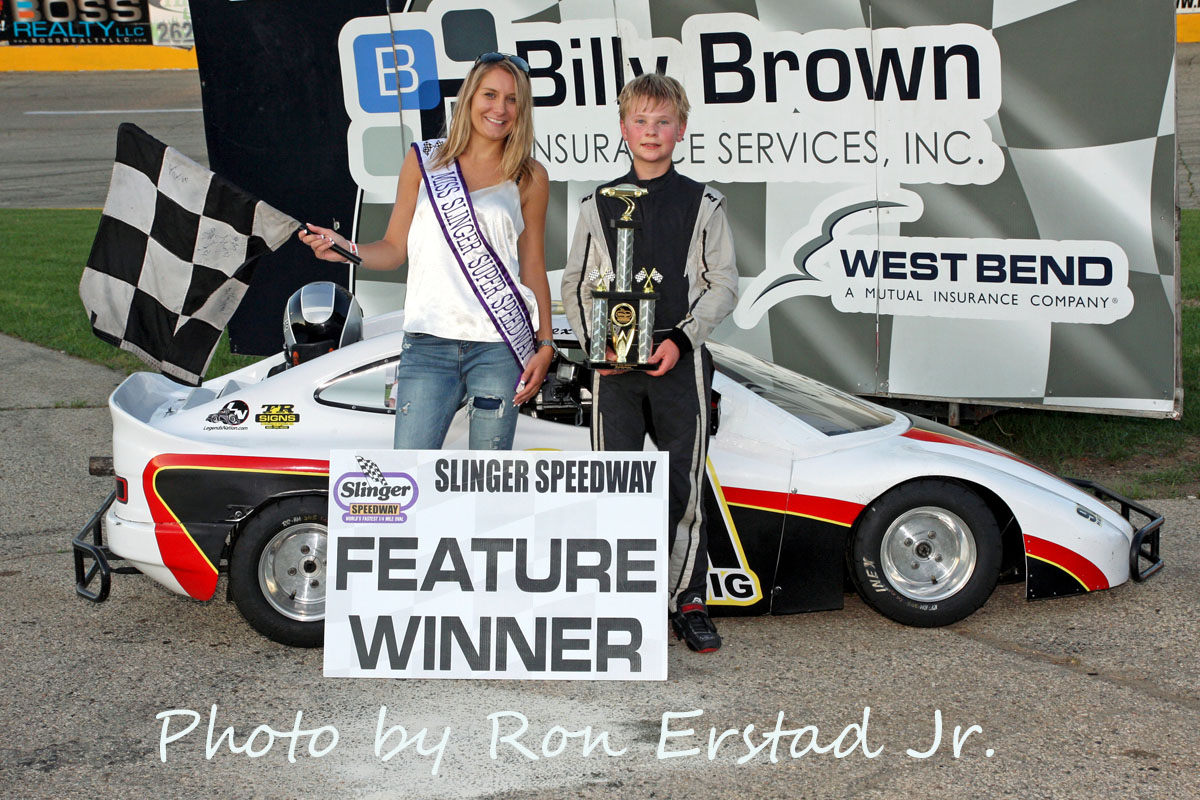 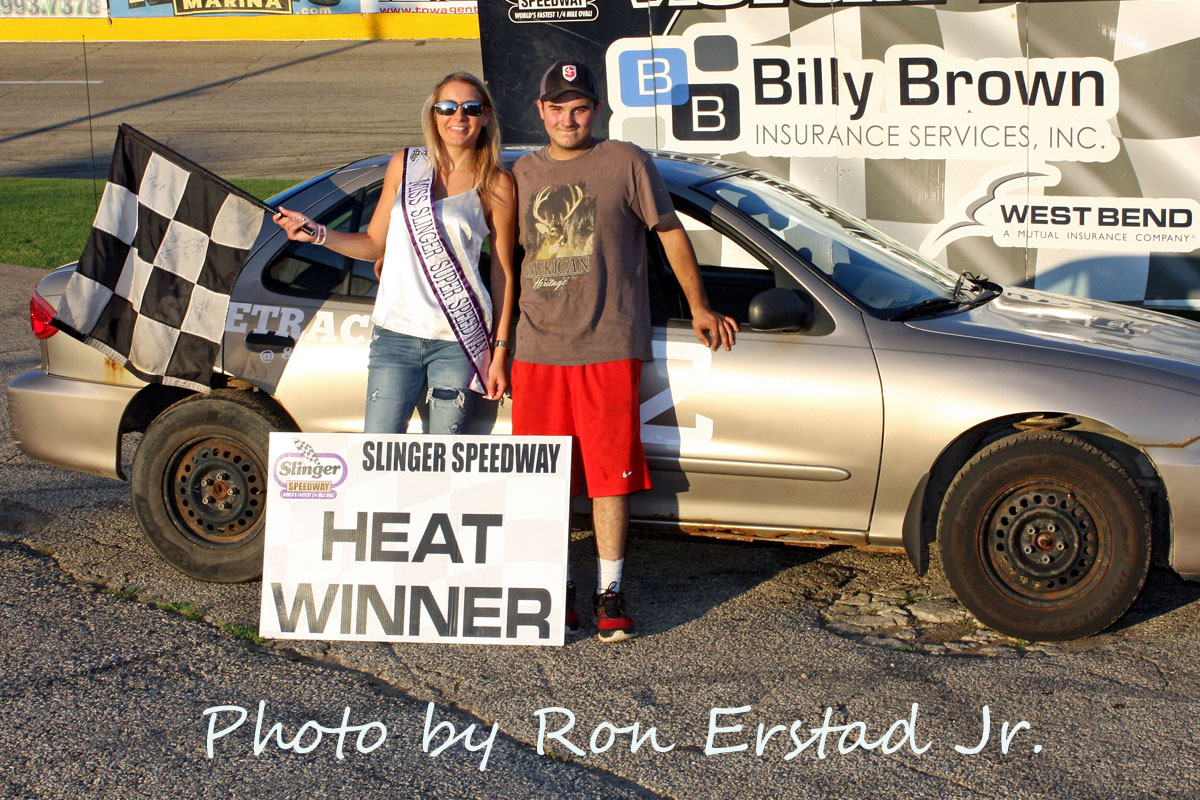 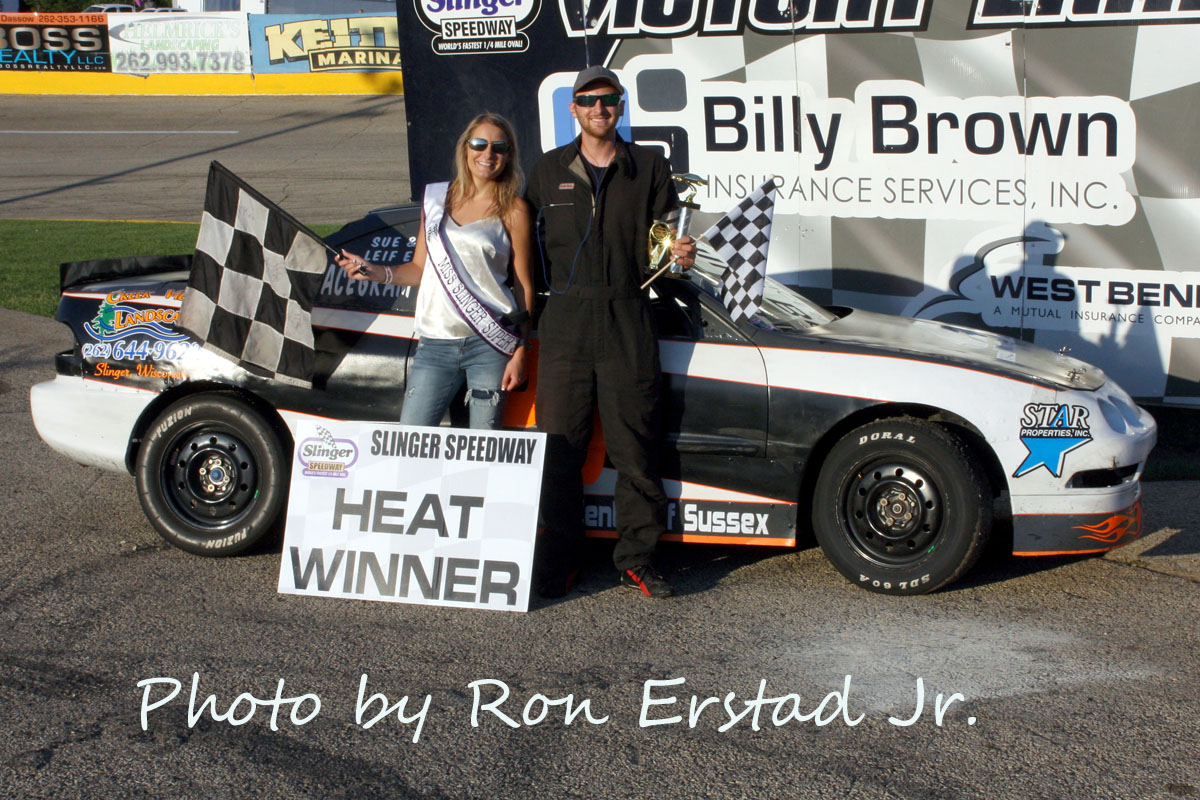 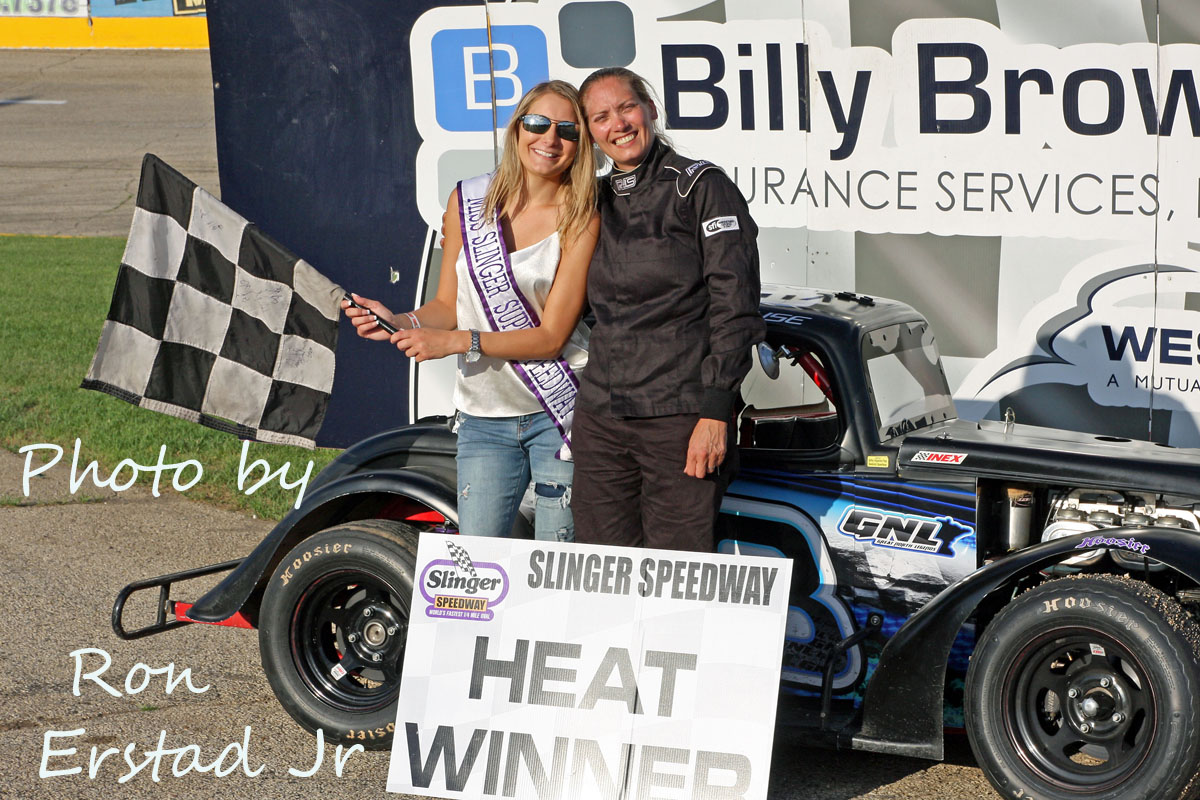 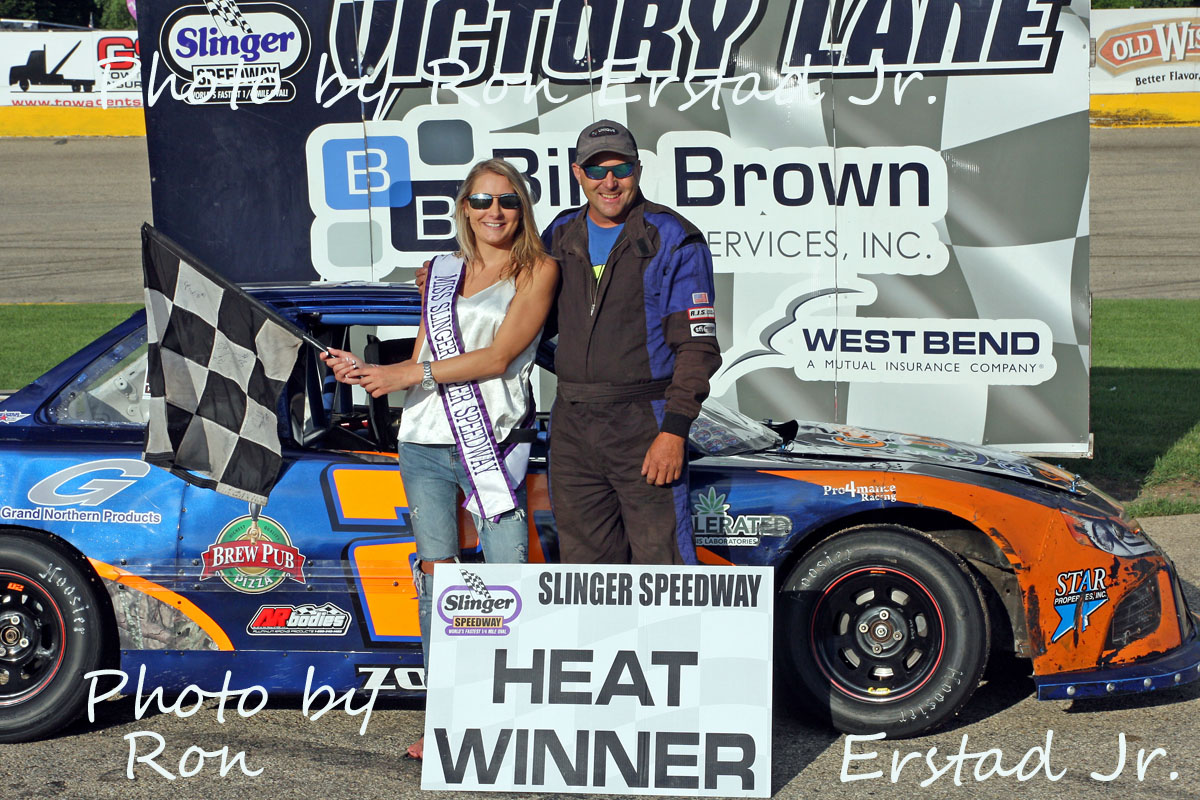 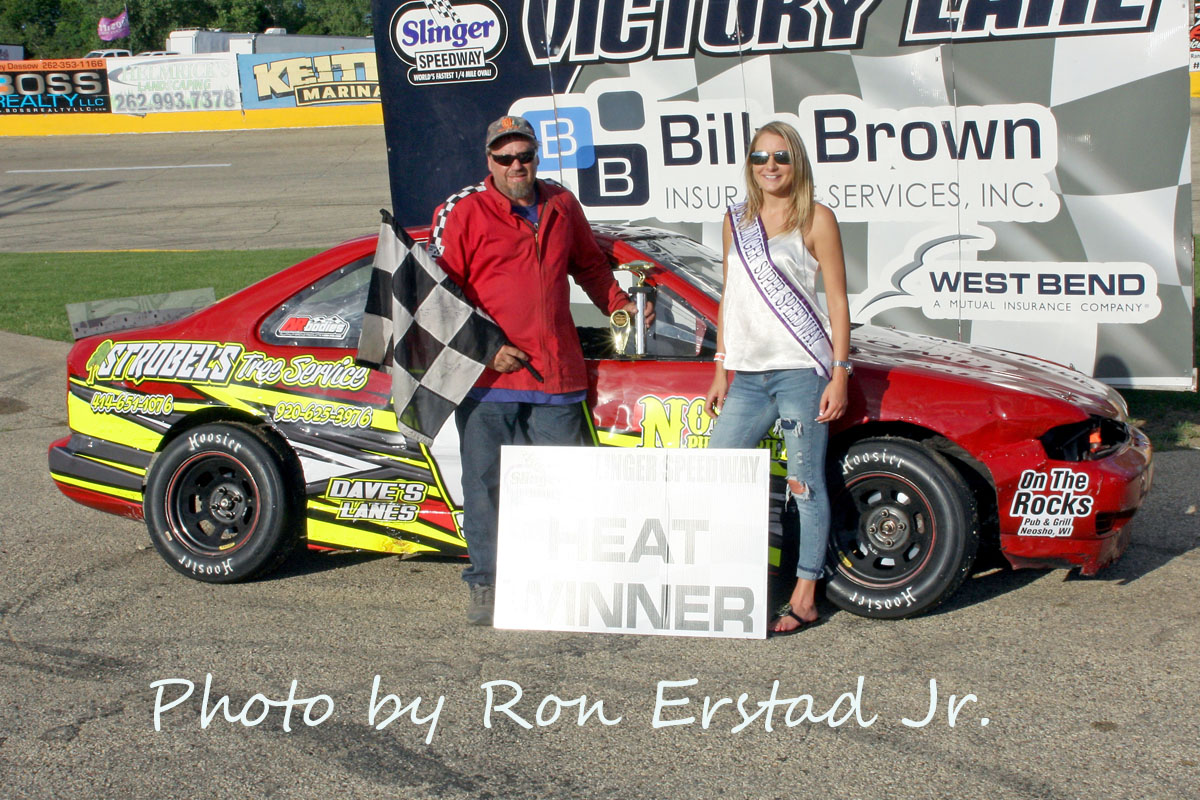 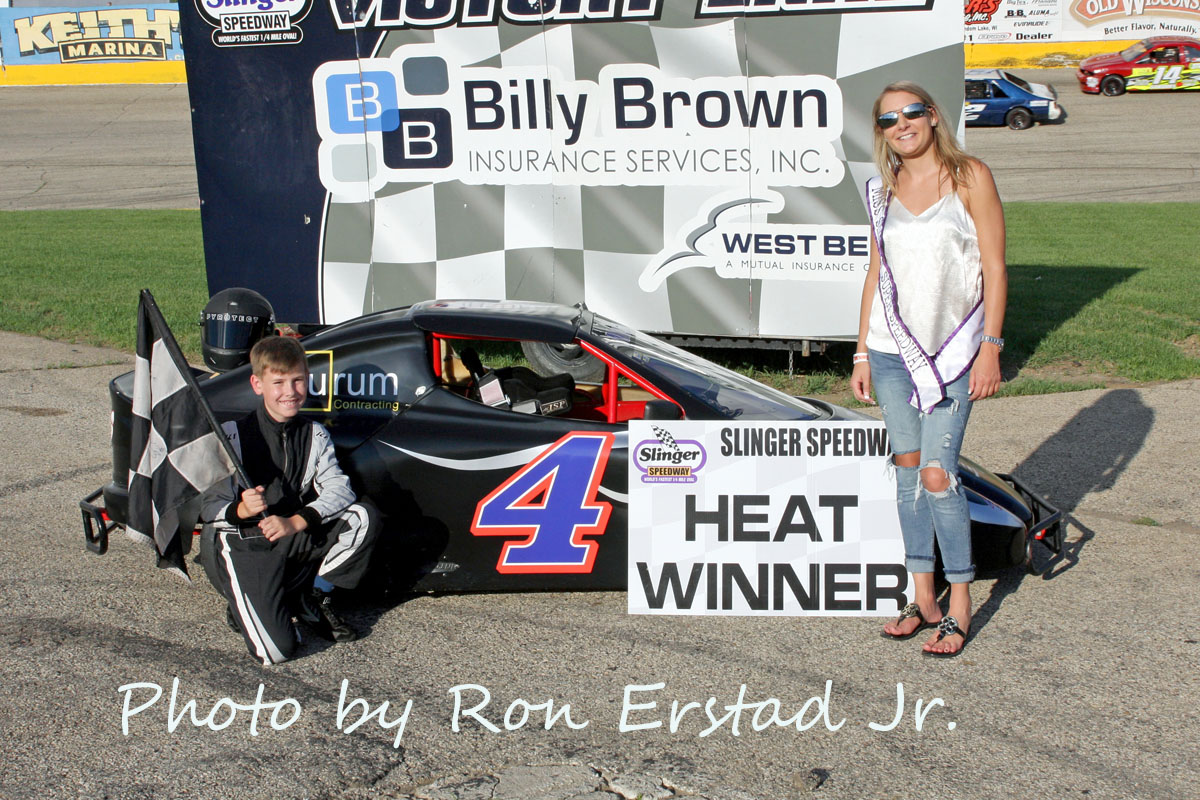 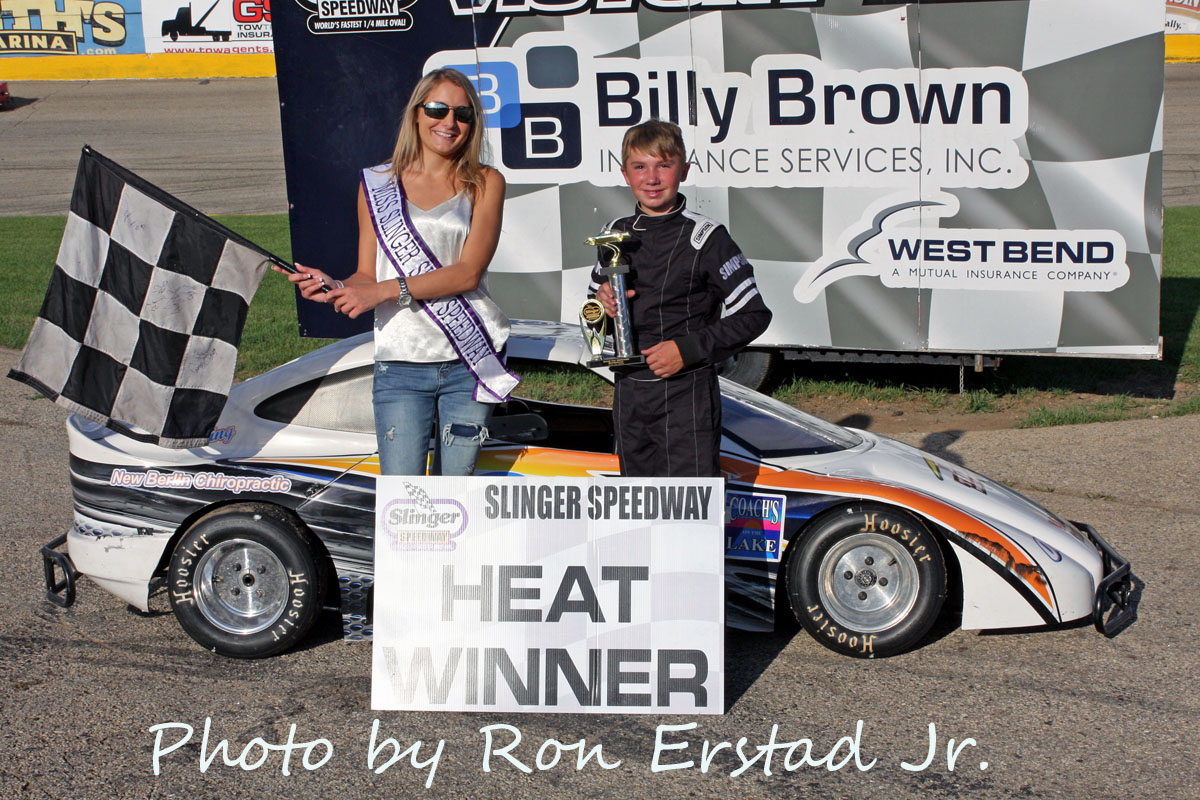 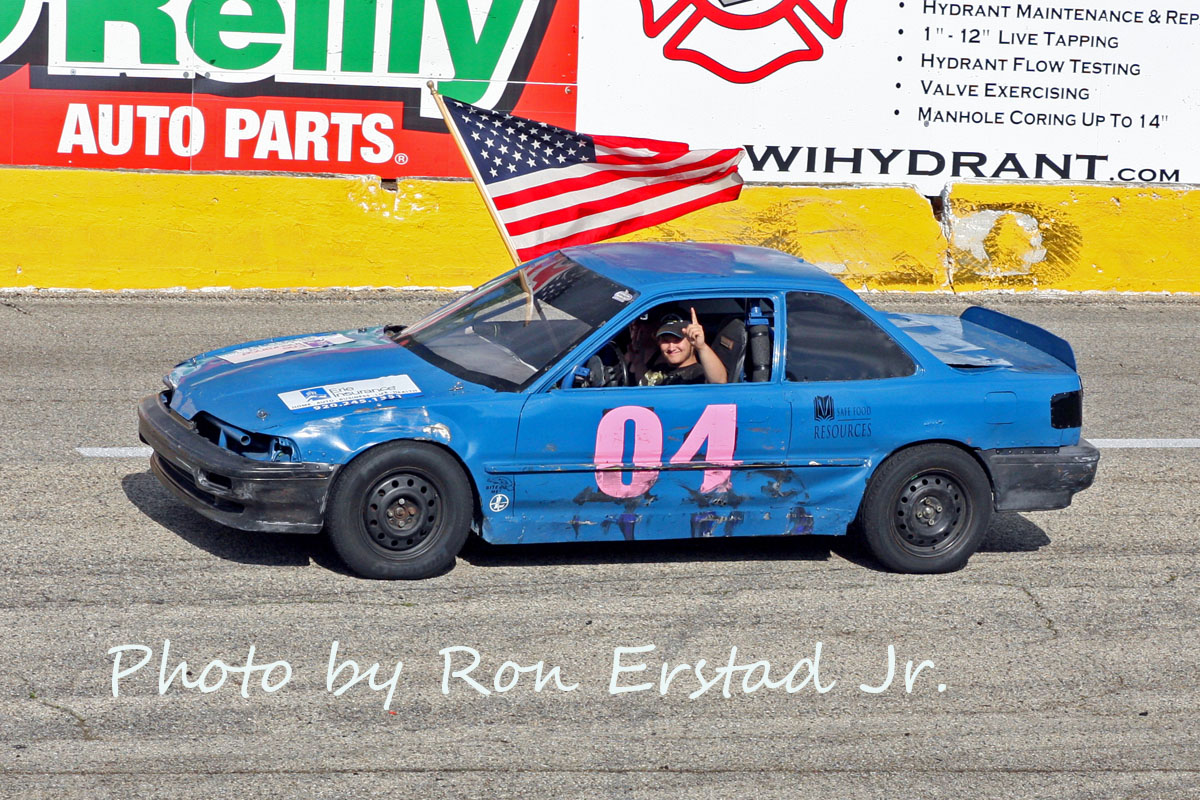 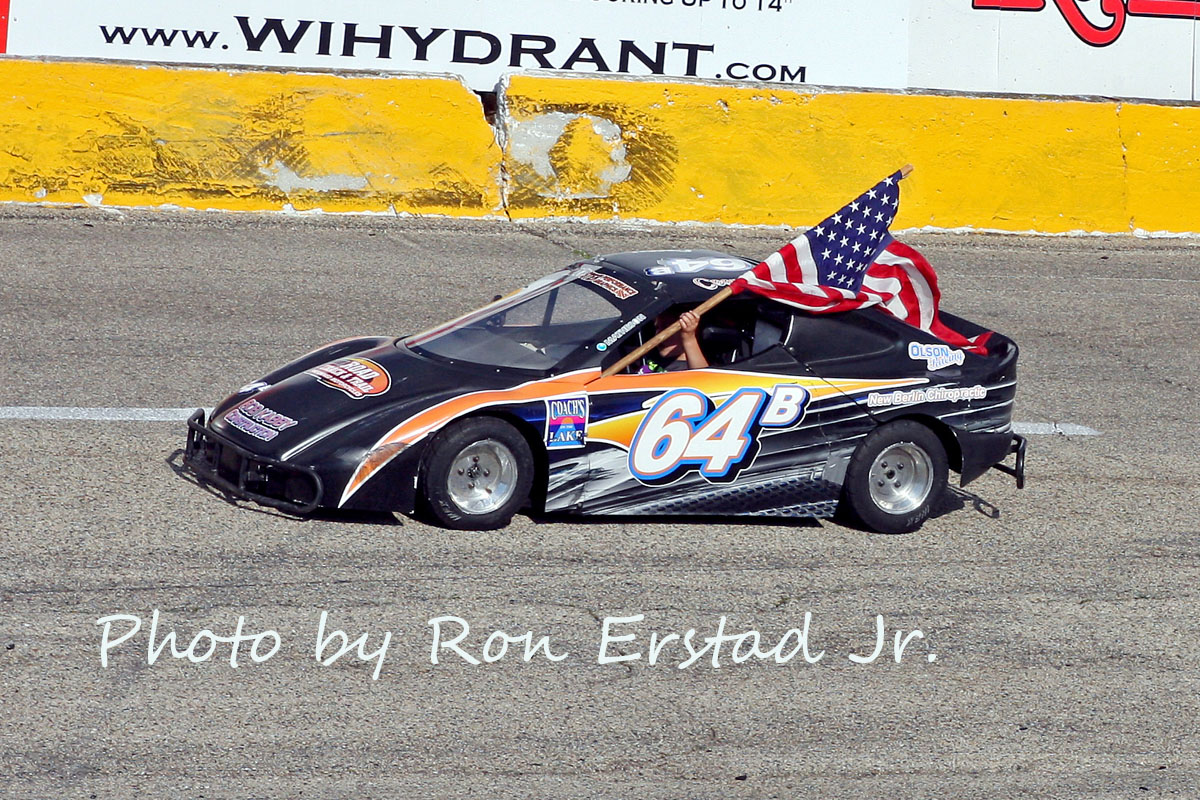 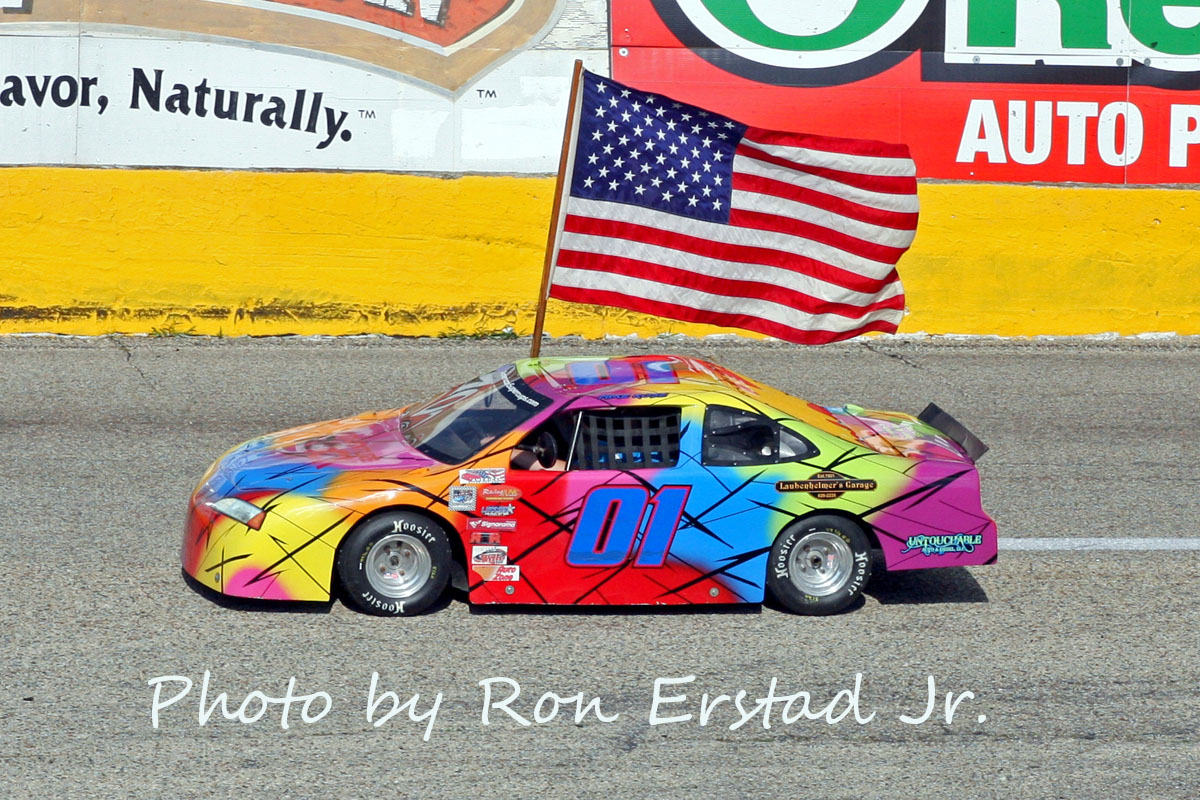