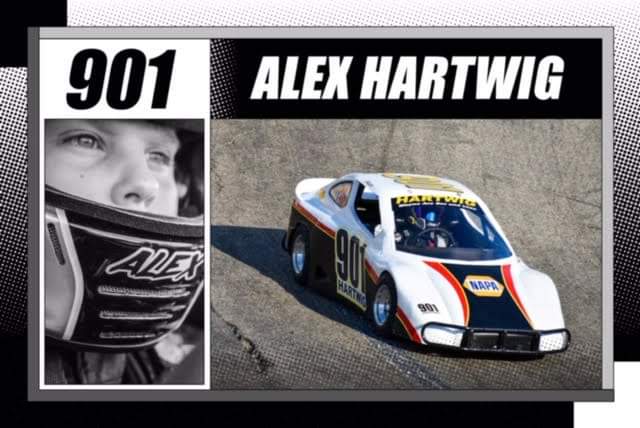 Driver of the #901 Bandolero, who just recorded his 80th career win!

How did you get into racing?
My dad’s friend had a go-kart and we rented it for a night. I found I liked that, so we kept going. I raced go-karts on dirt for two years. Then I moved to Bandos because my dad thought they were safer.

What do you like about Slinger Super Speedway?
The banking. When you go into the corner, the banking pushes you into your seat. You can actually feel the G-force!

Describe the Bandolero division.
Kind of like a mini-NASCAR, but a lot less power. They have a Briggs and Stratton V-Twin Vanguard and go about 72 mph. Everyone is super nice and there is good competition!

Who do you need to thank?
Crew: my dad, Bob; Sponsors: NAPA, Wayne Ace Bus and Limo, Two Rivers Signs; Anyone else: my family and the “Fight Like Mike” Johnson family – my friend that has battled leukemia since I started racing. Mike is doing well and his picture is still on my car. They come to a lot of our races.

Give us the basic “stats” on you.
I’m 12 and have been racing for 5 years. I go to St. John’s. I like Minecraft, iRacing with people all around the country, “Hogan’s Heroes” (it’s kind of funny) and “Chasing Monsters” (fishing show)

How did you get your car number (901#)?
Dennis from Wegner brought a kart to Beaver Dam and we tried it out. It was number #90, but there was a 90 out there, so we just took a strip of duct tape and made it 901. Not even knowing if we’d race again. But we did, and it stuck. Our zip code also ends in 901 – that wasn’t planned, it just happened that way.

You set the track record at Slinger last season and then broke it at the last race of the season. Could you tell it was a fast lap?
I could kind of tell but not a lot. But I could tell I was smooth.

You recently recorded your 80th win; do any of them stand out?
At an early race in Slinger, I tried to split two drivers but hit them both. It knocked the car really bad out of tow. I went in the pits and my dad fixed it by kicking the front really hard while I held the steering wheel. When we took the cone, everyone picked the inside except two cars, so I started in the second row and won the race.

What’s next for you in racing?
A truck or some kind of late model – maybe next year. We looked into it this year, but it’s more expensive than we thought. Plus a lot of tracks won’t let a 12-year-old run in those divisions (without a very expensive insurance rider). Maybe a Legend for a couple of years.

Which Slinger driver (past or present) do you respect the most?
We were at Slinger for a Sunday morning practice. Steve Apel also happened to be there and he came over to talk to us. We didn’t know him – he just came over and said, “You guys are getting through 1-2 really well, let me tell you about 3-4”. It was really cool for a high-level performer to come over and talk to a Bando driver he never met. [Follow-up question: Did you follow his advice?] Yes! I also like to watch Aaron Moyer in the Legend – the way he gets through traffic without hitting anybody. He knows exactly how wide his car is and where his bumper is.