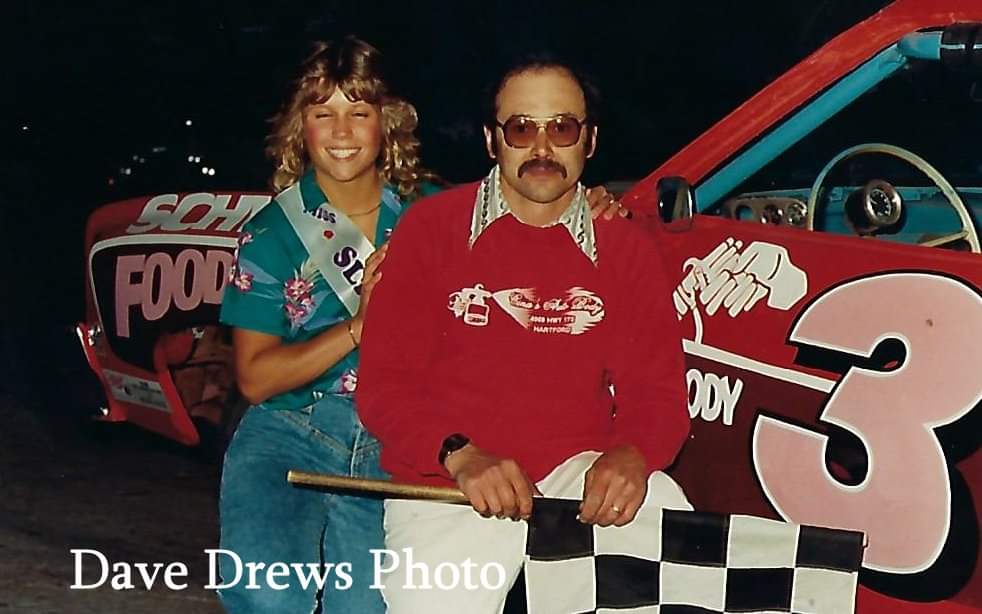 Join us on Sunday for Alumni Night! (Alumni must RSVP to slingerspeedwaymarketing@gmail.com)

Former champions will gather on the Billy Braun Victory Deck at 6:10 for a group picture!

Jim “Chico” Cina
Raced: Slinger Stingers 1984 to 1992
Champion: Slinger Stingers 1986
My favorite memory was in 1986. I won the championship, became a grandpa, and a writer for the Milwaukee Journal won a race with my race car! He then wrote a story about me and my car!! That was so special to me!!!

Art Wachs, Jr.
Raced: “Raced a few times when it was still dirt” – Hobby Stock/Sportsman around 1971, Late Model 1984 to 1985
Racin’ for Food! A long, long time ago…we sometimes raced for food. Toward the end of the feature you knew what position gave out pizza or a bucket of chicken from local sponsors. I would always ask my crew “chicken or pizza?”. One night I settled into my “chicken” spot when Mic Kolowith slowed to put me in the “pizza” spot. We were both hungry for chicken and each trying to drop into that spot without losing another position. After the race we were both laughing our butts off knowing what we did…never thinking anyone else raced for food. I loved racing at Slinger. THANKS for the memories!

Randy Schuler
Raced: Slinger Stingers 1992-1994, Super Late Models 1995 to present
My favorite memory of racing at Slinger Speedway was winning the Miller Lite 120 in 2009. I remember it was the first time I lapped Brad Mueller, and I was surprised that I got past Eric Fransen for the lead. I remember drinks flowing at Sheryl’s Club 175 (our sponsor) afterward, including champagne that Sheryl brought out, but memories of the rest of the celebration get fuzzy.

Doug Duncan
Raced: Mini Stock 1982-84, Sportsman 1986-1990, Modifieds 1991-1993
Champion: Sportsman 1990, Modifieds 1991
I have so many great memories of my years racing at Slinger, I can’t really pick just one out!!! I think they are some of the best memories of my life so far!!!! The willingness of other racers to help out someone that probably will beat them in the next race is almost unbelievable!! When we were just getting everything figured out in the Sportsman division in about 1988, we stripped out a drive plate in qualifying. We were loading up the racecar to head home when Roger Otto came over and said he had a drive plate we could use. He just said to get it back to him when the races were over that night. Well, I was shocked because Roger was not one of the easiest guys to get along with – he was a very intense racer. But, I said yes and, to say the least, our relationship was completely different from that point forward. Also Rapco Performance Brake Systems was a sponsor of my team and Rich Bickle’s team too. They sponsored a night of racing at Slinger in 1989, I think. Rich won the 75-lap Late Model feature and I won the 40-lap Sportsman feature!! It was a great night for them for sure!! Also in 1990, I won the first four features in a row and eight total for the season. We had the championship locked up with four points races left. Wish I could go back and thank all the great people from back then!!!! But more than anything I have so much respect for my crew!!! They really did it all!!! I just drove the car on Sunday nights.

Jim Bentzler
Raced: Thunderstock 2007-2012, SlamFest Team Cruiser, Spectator Eliminators
I remember one time when I was racing against Al Stippich and Aaron Cain in the Thunderstocks. Al’s front tire fell off, Aaron drove over it, and I won the feature! That was a great night…well, for me.

Bob Hamel
Raced: Sportsman 2013-2017
Beating James Swan after he wrecked and I went over there to talk to him and he said, “Yea you got me,” and that I did a good job. Also, just finishing races on the lead lap. Those guys are good, man.