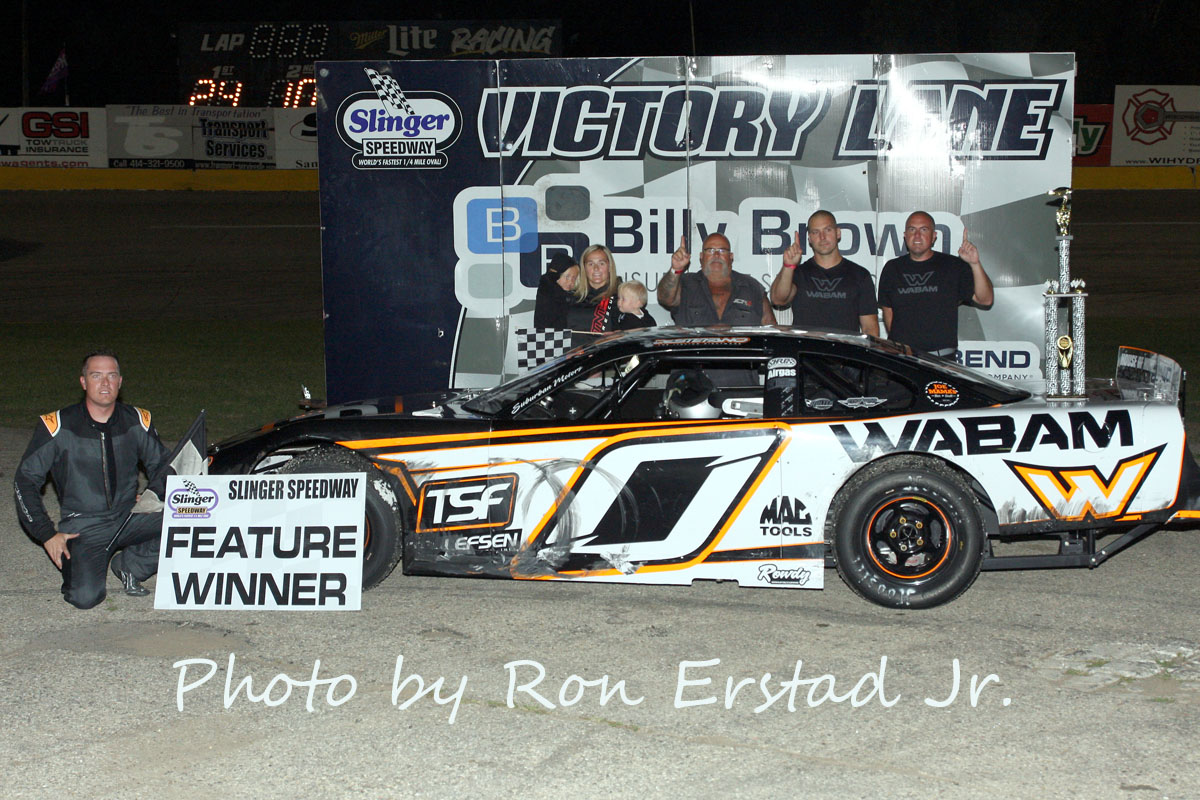 Slinger, Wis., Aug 30—A driver’s first super late model feature victory at the Slinger Super Speedway is always memorable but the moment is even more special when that victory is achieved by beating the best in the business.

Ryan DeStefano did just that Sunday night as he captured his first career super late model feature win in the 75-lap main event by besting Rich Bickle Jr., Steve Apel, and Conrad Morgan who together own 13 track championships between them.

“We’ve been doing this for twenty-some odd years, hell yeah!”, and excited DeStefano proclaimed from victory lane, “I tried to drive with a ton of respect because Rich (Bickle) has more laps around here than I’ll ever see and he had a great car early on and I had a little better car but didn’t want to push the envelope. I held back a little bit and when the time came to go, my car was pretty good on the outside and we may have touched but I ran him as clean as I could.”

“It’s just surreal,” DeStefano continued reflecting on finally achieving his first super late model victory, “We’ve been growing up here and we’ve been at this track for 36 years and we’ve always dreamed of doing this.”

“We were pretty good and unfortunately on the last restart the carburetor loaded up,” Bickle said after leading 64 laps of the race before finishing second, “We’ve had some bad luck this year so to finish second feels pretty good. Of the 226 tracks I have raced at Slinger is definitely in the top ten and it’s one of my favorites.”

Conrad Morgan paced the first lap of the race by edging Bickle from the outside of the front row as the caution flag waved early after lap one when Jerry Mueller’s car spun into the infield off turn four. Bickle quickly grabbed the lead on the restart from the inside lane and the caution flag waved once again on lap four when Morgan’s car kicked loose off turn four and slid toward the infield as the cars of Mike Meyerhofer, Pat McIntee, and R.J. Braun all received damage in the scramble to avoid the incident. Bickle was maintain the lead as racing resumed while Ryan DeStefano used the inside lane to challenge Nick Wagner for second with Brad Keith, Alex Prunty, and Steve Apel close behind. DeStefano was able to pass Wagner for second and Prunty and Apel also moved up into third and fourth as Wagner and Keith became caught in the upper groove of the speedway. DeStefano made numerous challenges by looking to the inside of Bickle’s fender while Apel got around Prunty and began to close in third. Apel caught the lead duo as the top three ran nose-to-tail just before the caution waved again on lap 28 for when R.J. Braun spun off turn two while racing for position with Chris Blawat. Bickle was once again able to maintain the lead on the restart as Apel and DeStefano raced side by side for second with Brad Keith joining Alex Prunty in another side by side battle over fourth. Apel was able to take over second and he took his turn to challenge Bickle for the lead while DeStefano tried to hold off Keith and Prunty for third. With Bickle still out front, Keith was the next driver to step up as he passed Apel for second when Apel’s car washed wide off turn four and DeStefano also made the pass as he relegated Apel back to fourth. Bickle continued to lead as he fended off challenges from Keith just before the caution flag waved once again on lap 62 for a spin by Chris Pulera on turn three. Keith chose the outside for the restart and kept even with Bickle for a lap as racing resumed but when the leaders exited turn four, the real estate between Bickle’s car and the outside wall narrowed and as Keith checked up, DeStefano went by on the inside and into second as Alex Prunty pulled alongside Keith in a battle for third. That battle for third produced the next caution flag on lap 65 as contact between Prunty and Keith entering turn one sent Keith’s car spinning around in turn two. This time, DeStefano was able to keep up with Bickle on the outside and eventually pass him a lap later to take the lead. Bickle held onto second place by turning back a challenge from Apel as DeStefano edged ahead of them both. DeStefano drove the final laps perfectly and raced to his first career Slinger super late model feature victory while Bickle held off Apel for second. Conrad Morgan rebounded from his earlier spin to charge to a strong fourth place finish while Nick Wagner finished fifth. Chris Blawat finished sixth ahead of R.J. Braun and Rich Loch while Rob Braun and Brad Keith completed the top ten finishers.

Rich Bickle Jr. won the super late model fast dash and Brad Keith was the fastest in qualifying after circling the speedway in 11.234 seconds.

Jacob Nottestad grabbed the lead from Tyler Schley on a late race restart and drove to the victory in the 40-lap late model main event.

Zach Prunty paced the first 27-laps of the race before Schley was able to work his way into the lead from the inside groove. Prunty and Jack Stern began to stage a battle over second while Schley edged ahead in the closing laps while Jacob Nottestad ran a distant fourth. With six laps to go, Prunty’s car twitched toward the outside wall in turn two and as he tried to regain control of his car, Stern’s car was clipped in the right rear fender, sending both cars hard into the backstretch wall and drawing the caution flag. Nottestad advanced to second place due to the incident and he lined up to Schley’s outside for the restart. Schley appeared to spin his tires slightly as the green flag appeared and Nottestad took advantage by charging into the lead. Nottestad drove to the victory followed by Schley in second and Stephen Scheel in third. Ryan Craine finished in fourth followed by Schaun Scheel in fifth.

Late model heat races were won by Mitchell Haver, Cole Thomas, and Zach Prunty while Ryan Gutknecht was the fastest qualifier after turning in a lap in 12.095 seconds.

Jay Kalbus won the 35-lap sportsman feature after taking command of the event on lap seven. Brian Holtz finished in second placed followed by Bobby Gutknecht in third and early leader Andrew Meyerhofer in fourth. Jake Schraufnagel finished in fifth. Jake Schraufnagel and Brian Holtz were the winners of the sportsman heat races and Bobby Gutknecht set fast time with a lap in 12.670 seconds.

Zach Greer passed Scott Hoeft with four laps to go en route to victory in the 25-lap super beez feature. Hoeft finished in second place while Steve Zoromski rebounded from early issues to finish in third. The result was enough for Hoeft to earn the track championship for the division in a hotly contested battle with Zoromski all season long. Todd Buckley finished in fourth place and Brandon Tackes finished fifth. Zach Greer and Todd Buckley each scored victories in the super beez heat races and Scott Hoeft set a new track record in qualifying by turning in a lap in 13.514 seconds.

Brady Held edged Brandon Tackes in a photo finish to win the 25-lap Slinger bees feature. Ricky Gebhard was third followed by Mitchell Strobel and Misty Benn in fourth and fifth respectively. Slinger bees heat races were won by Colin Saegert and Ricky Gebhard while Brandon Mennicke was the fastest qualifier with a lap at 15.245 seconds. 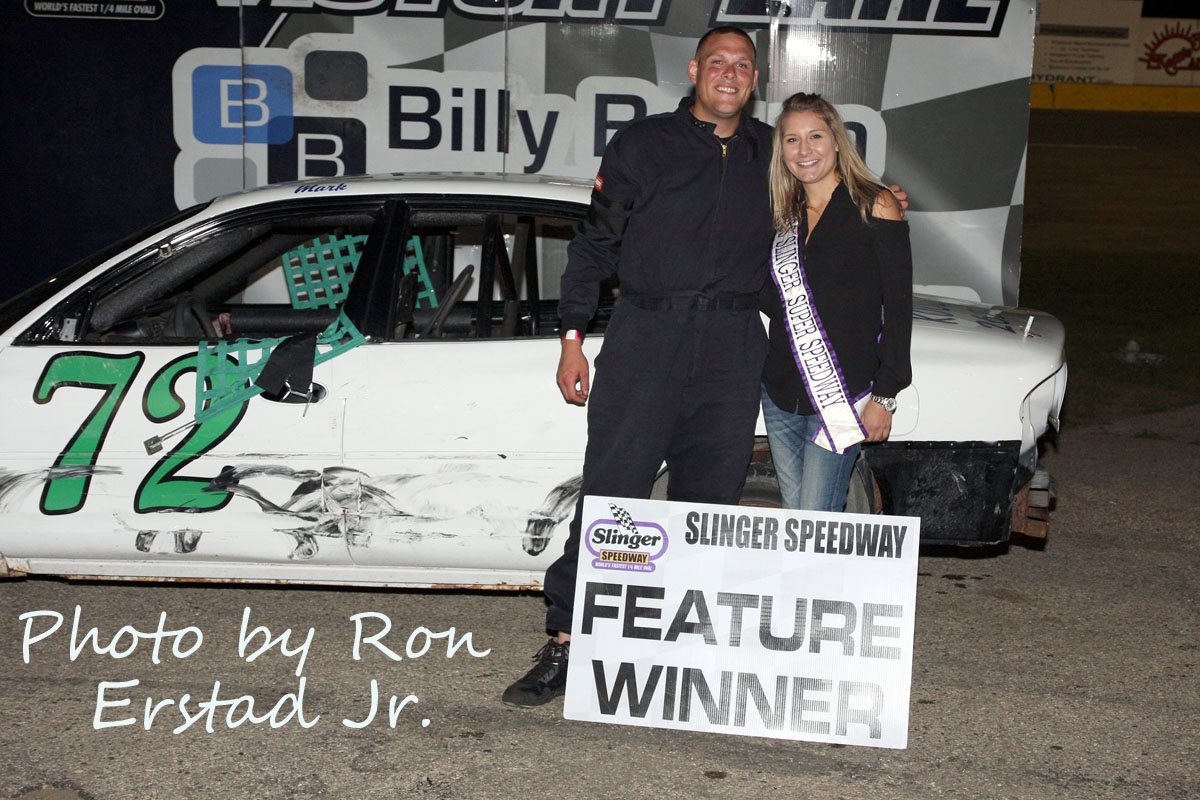 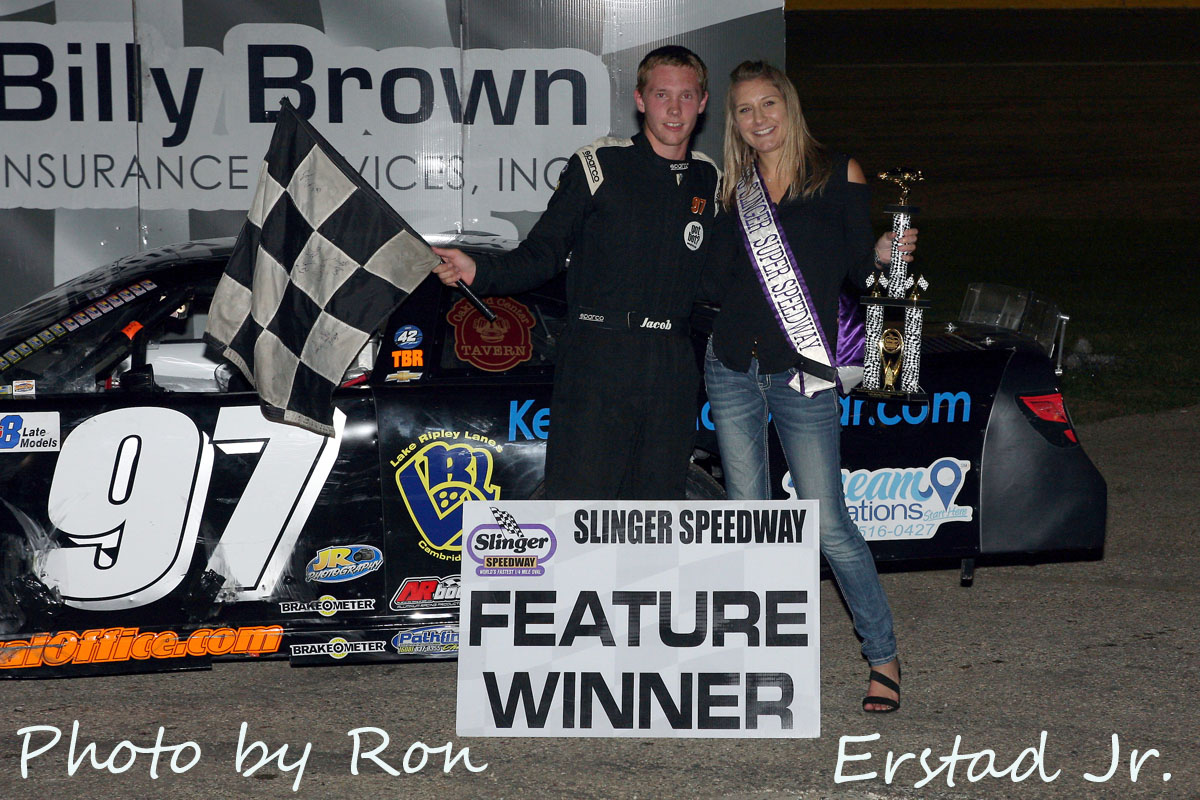 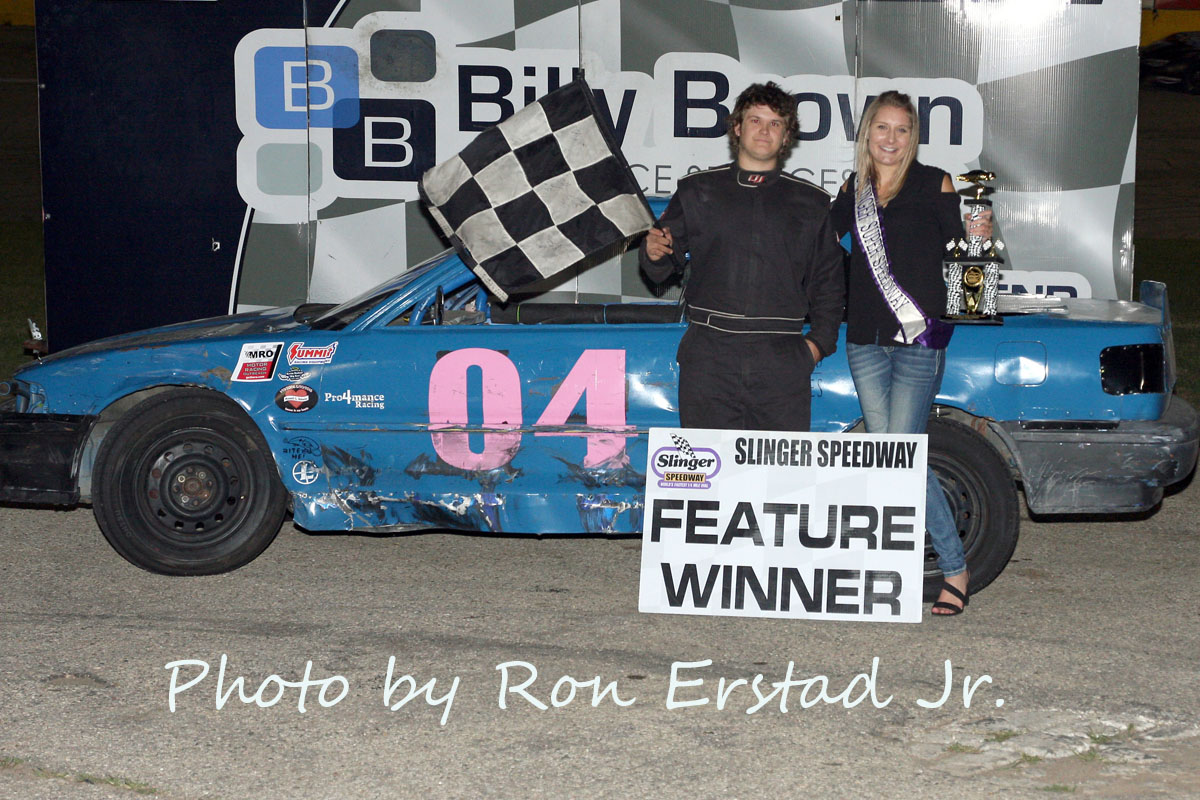 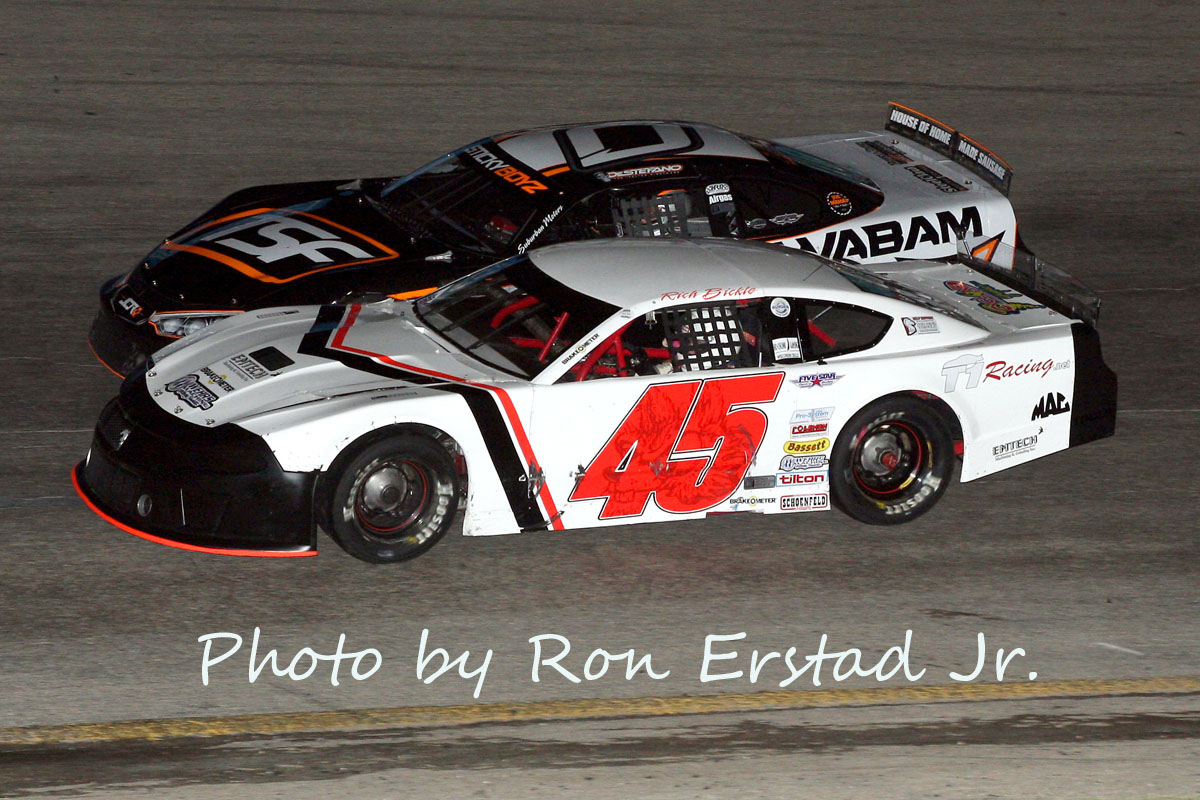 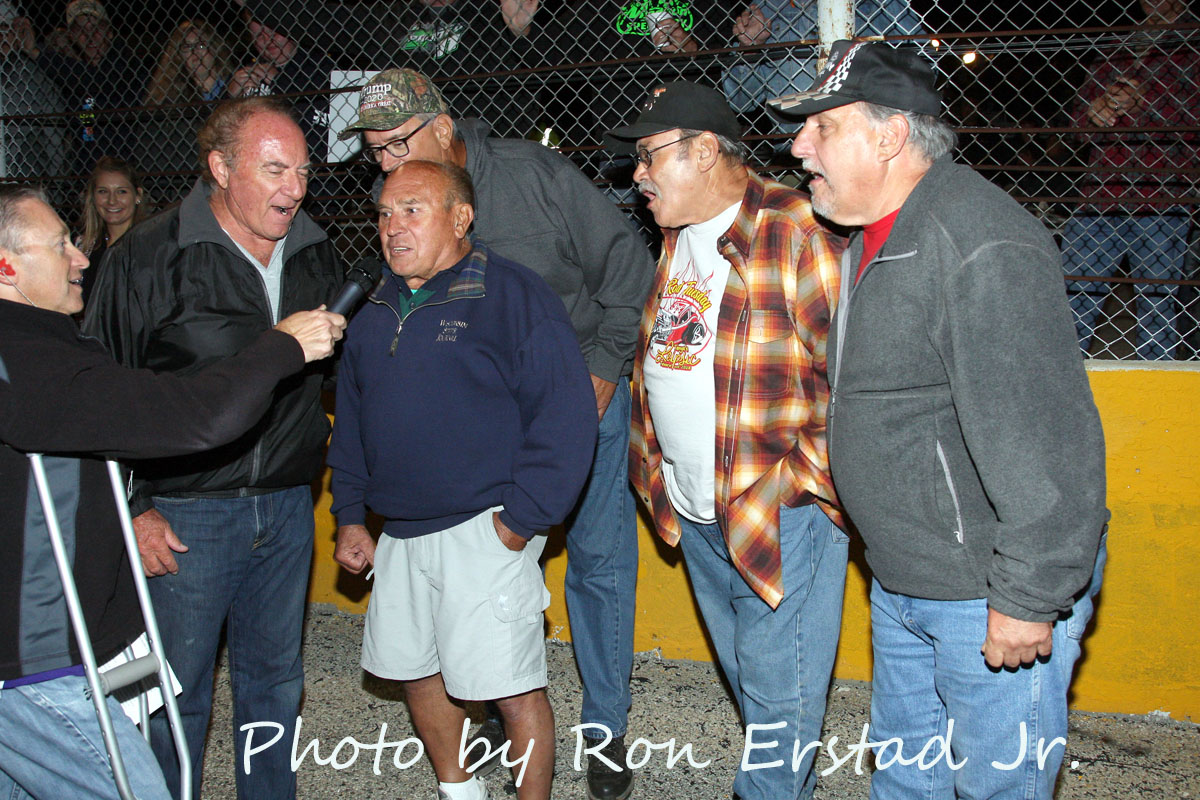 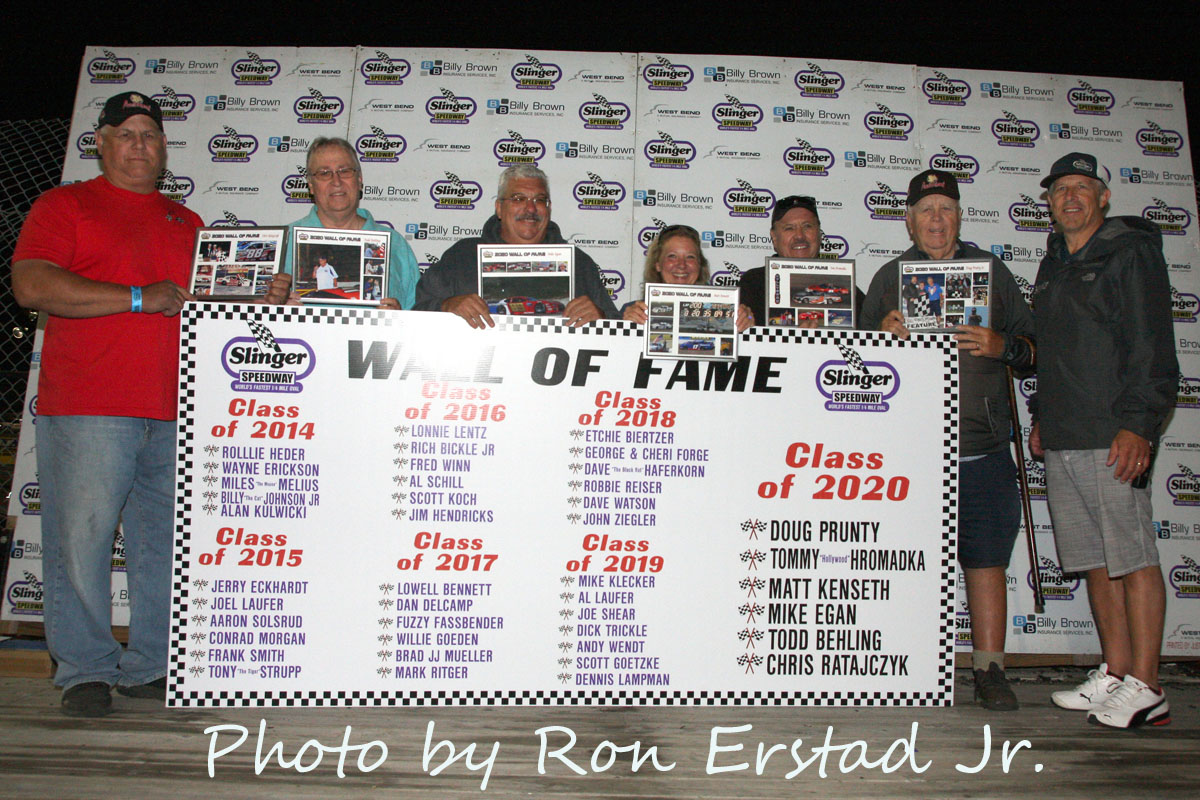 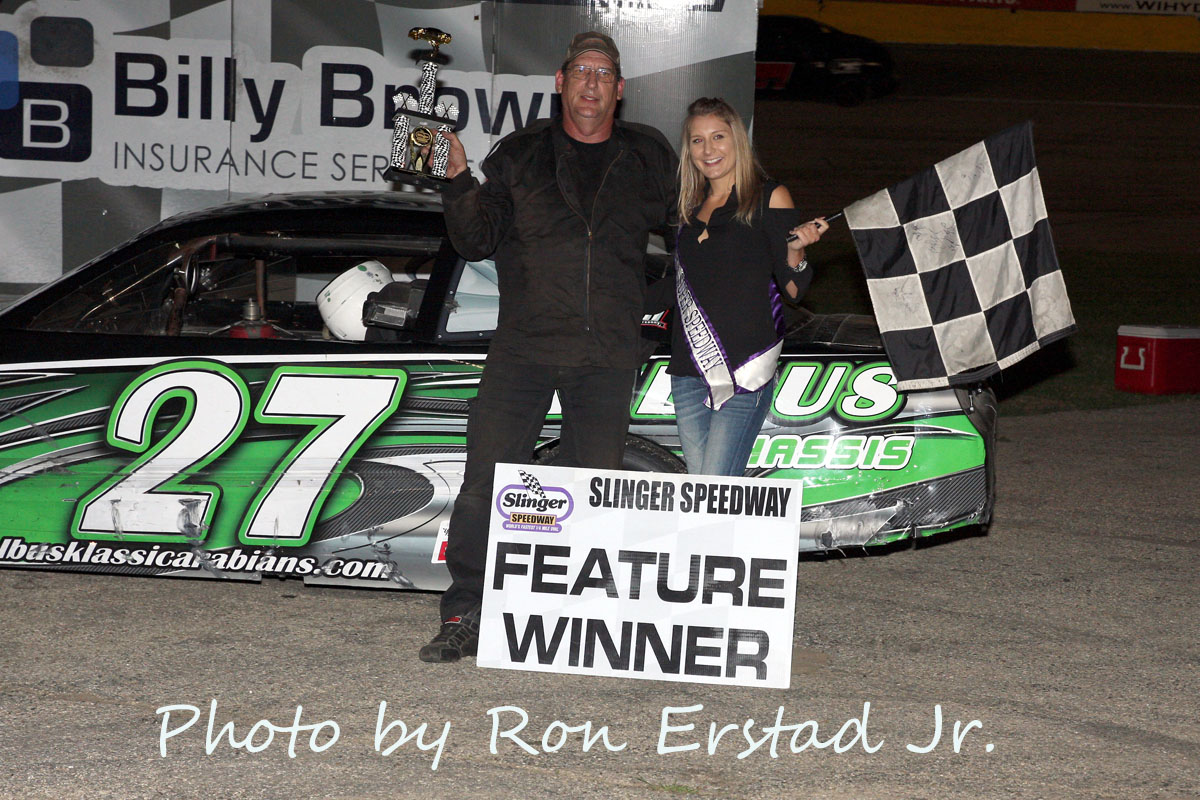 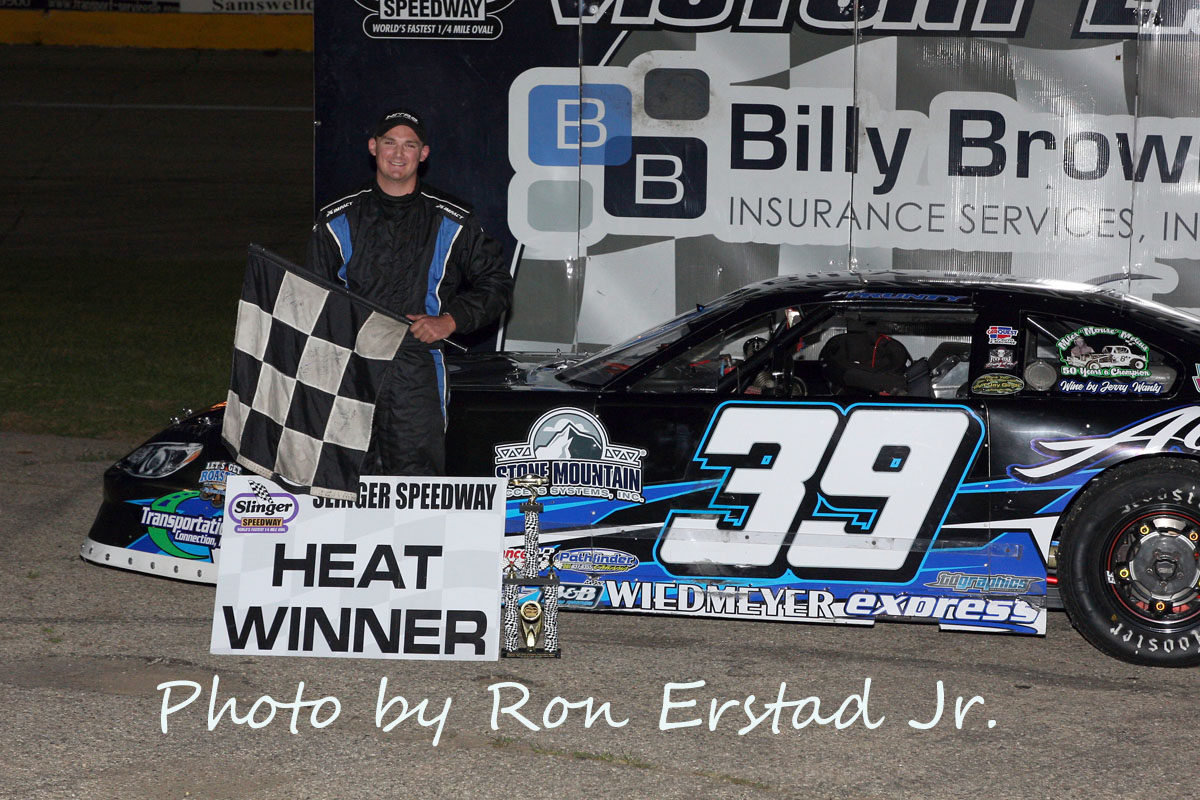 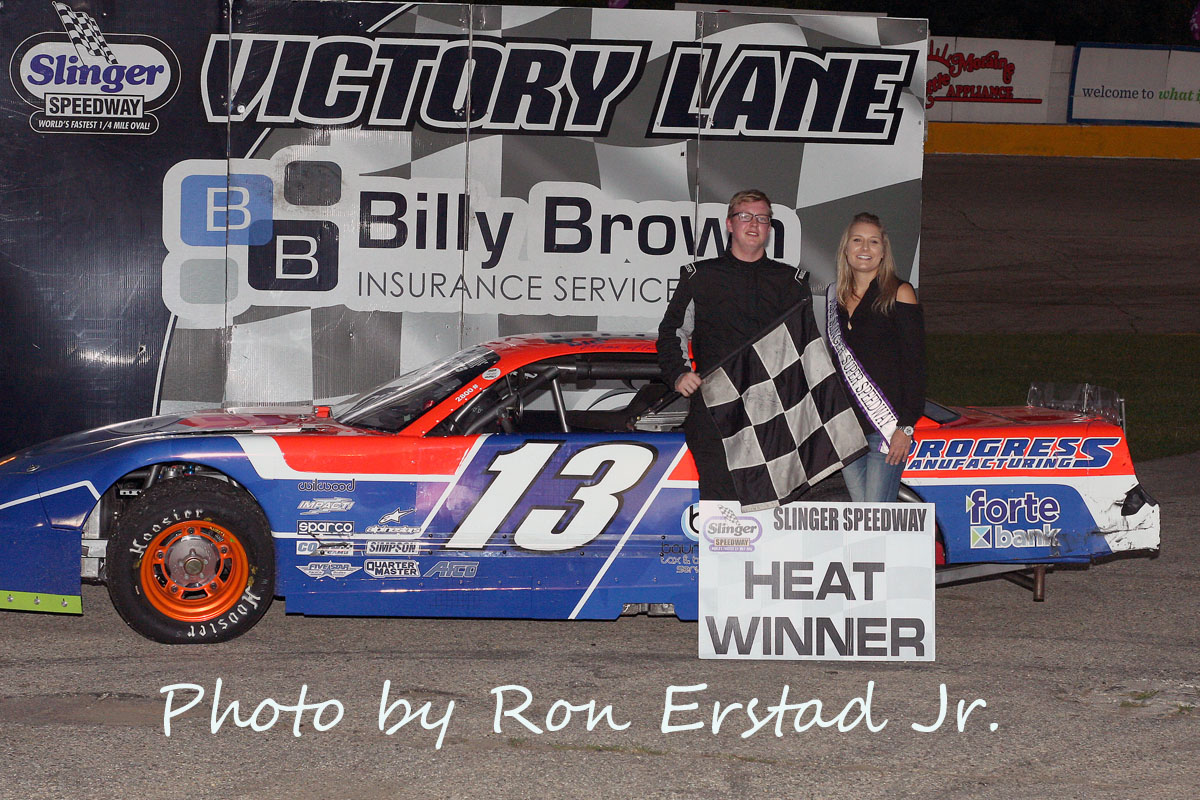 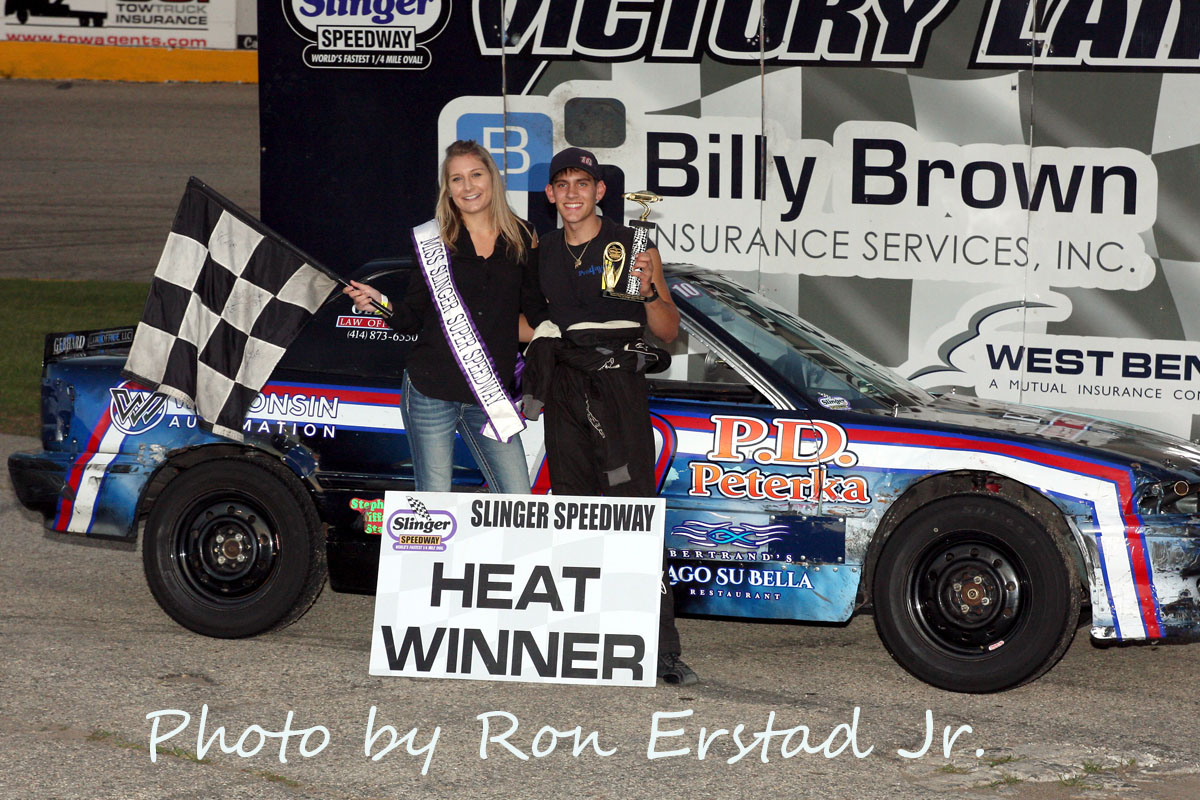 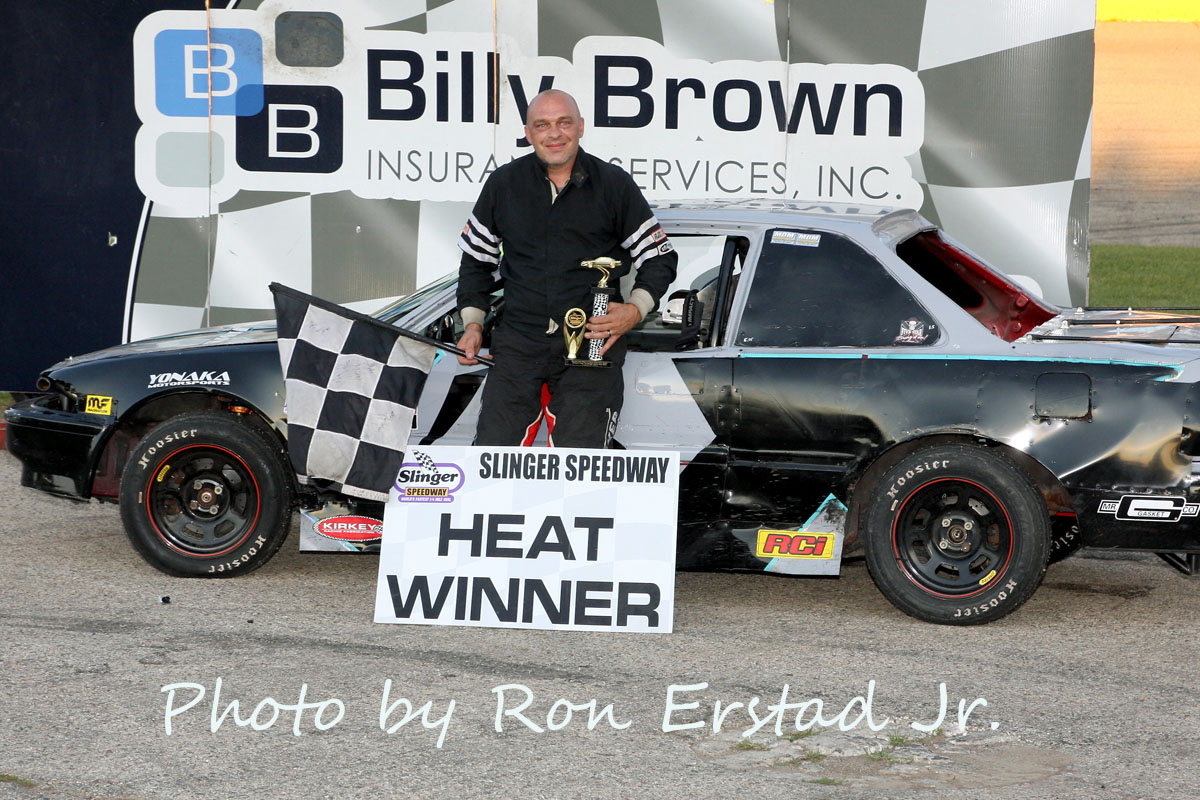 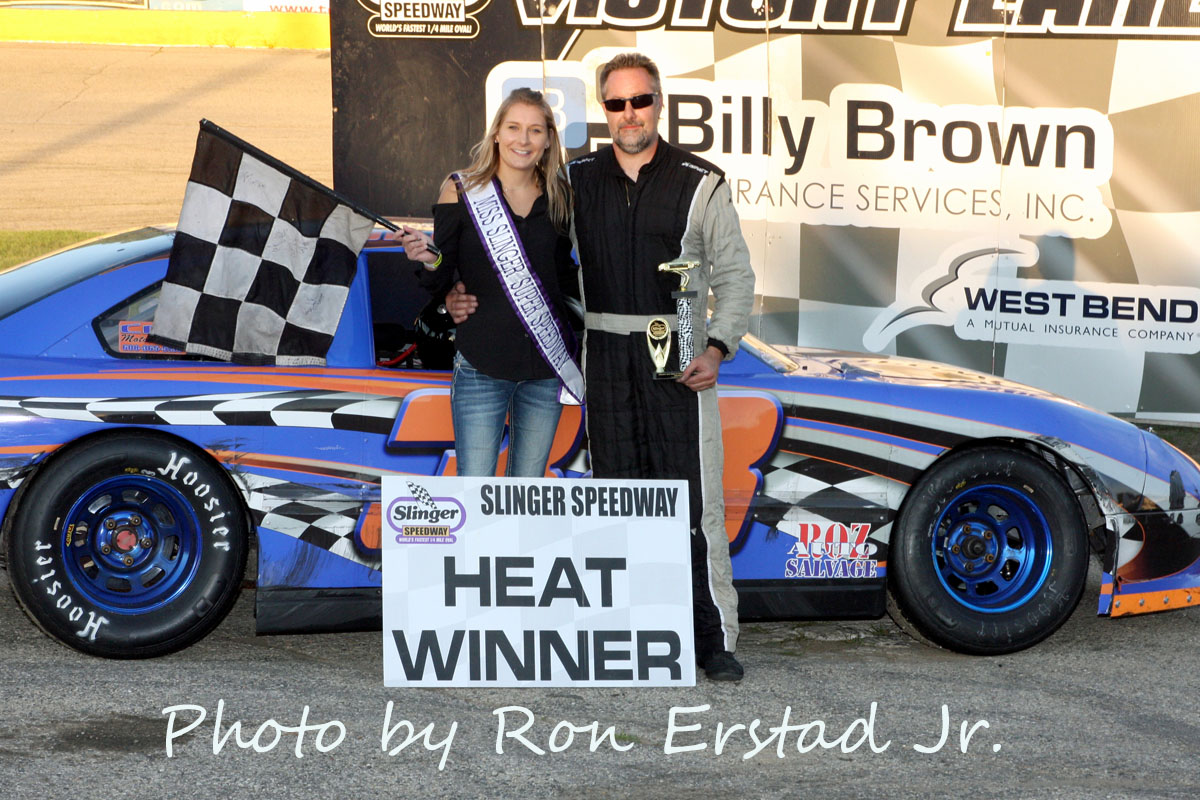 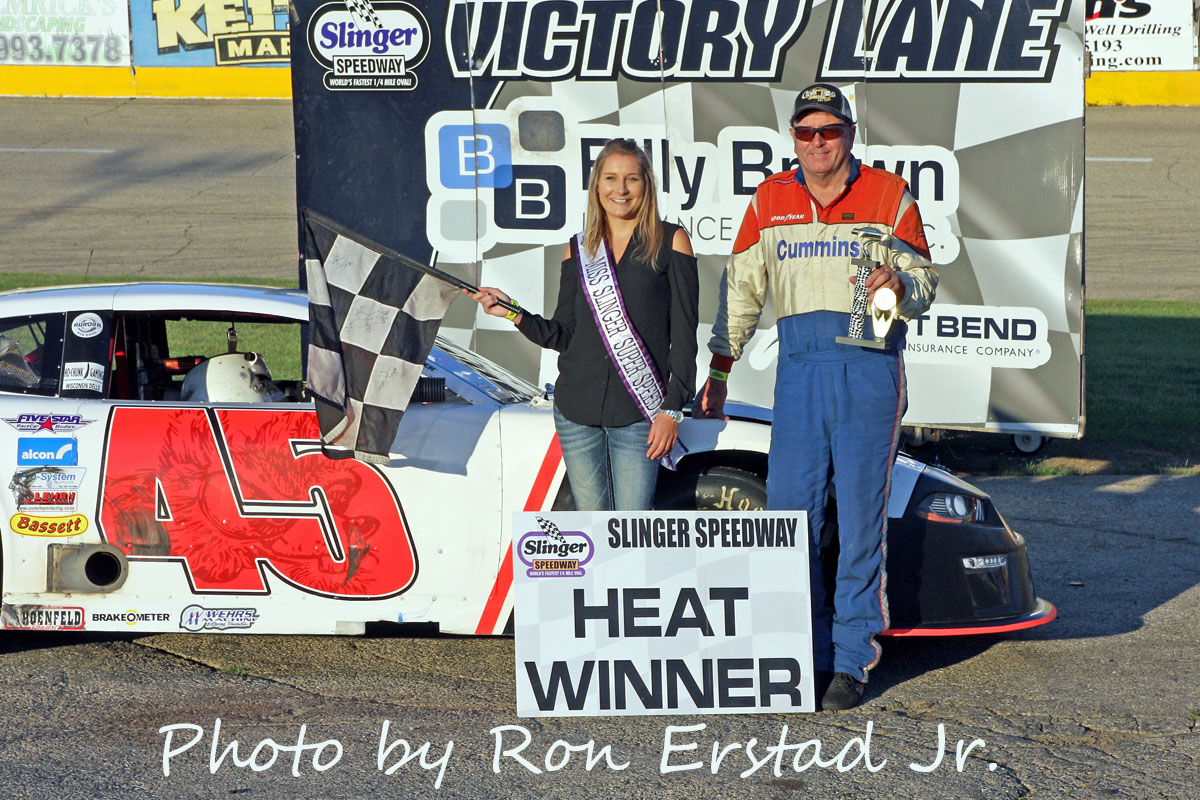 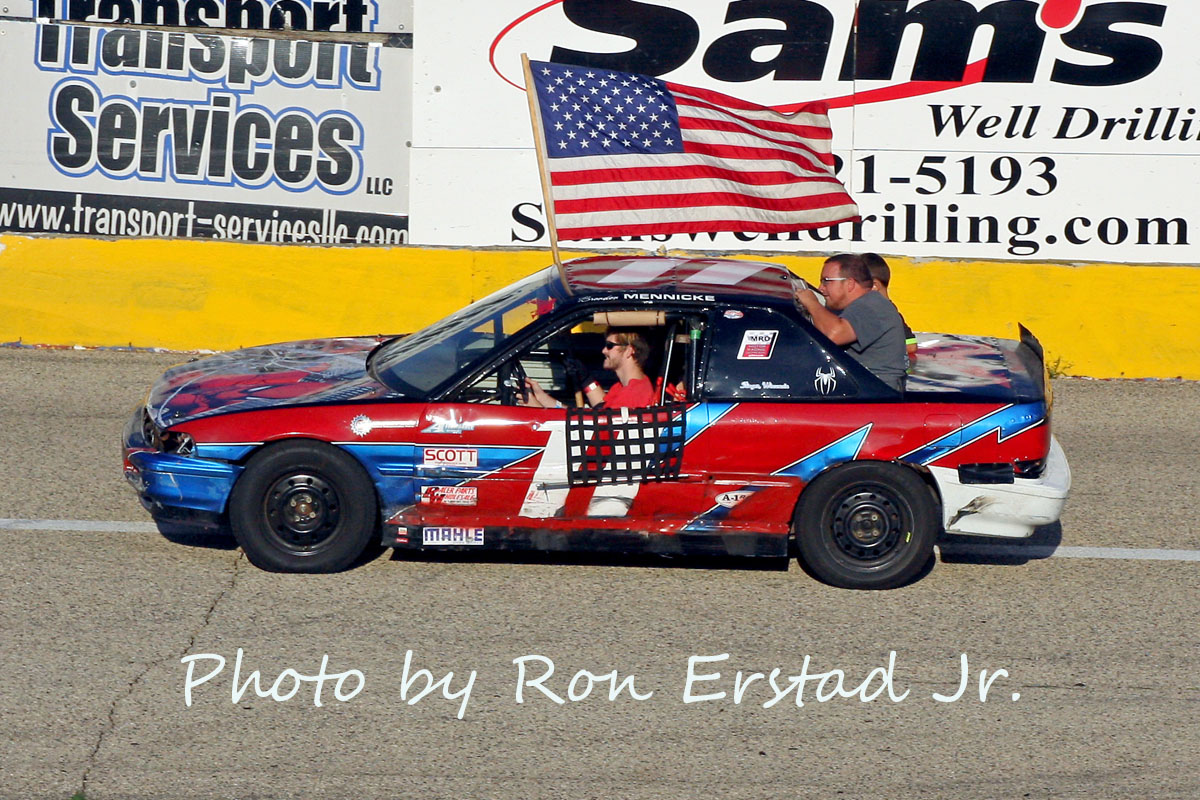 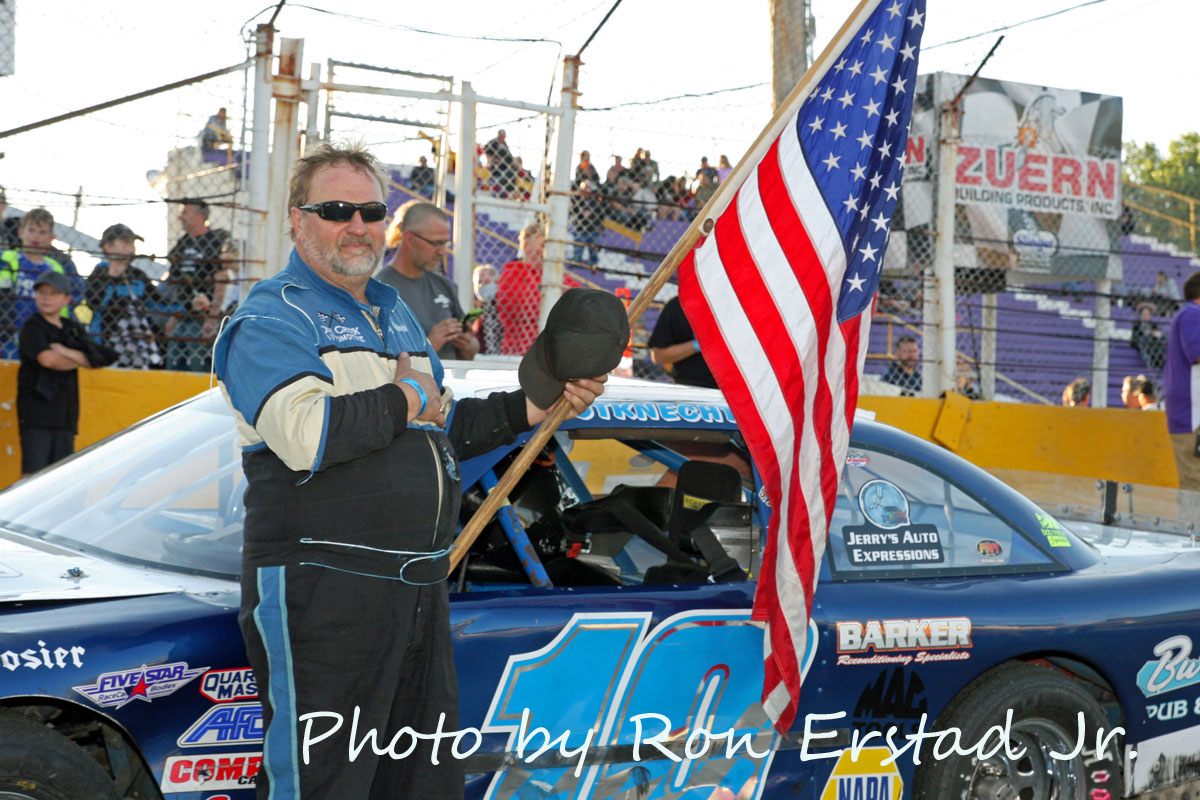 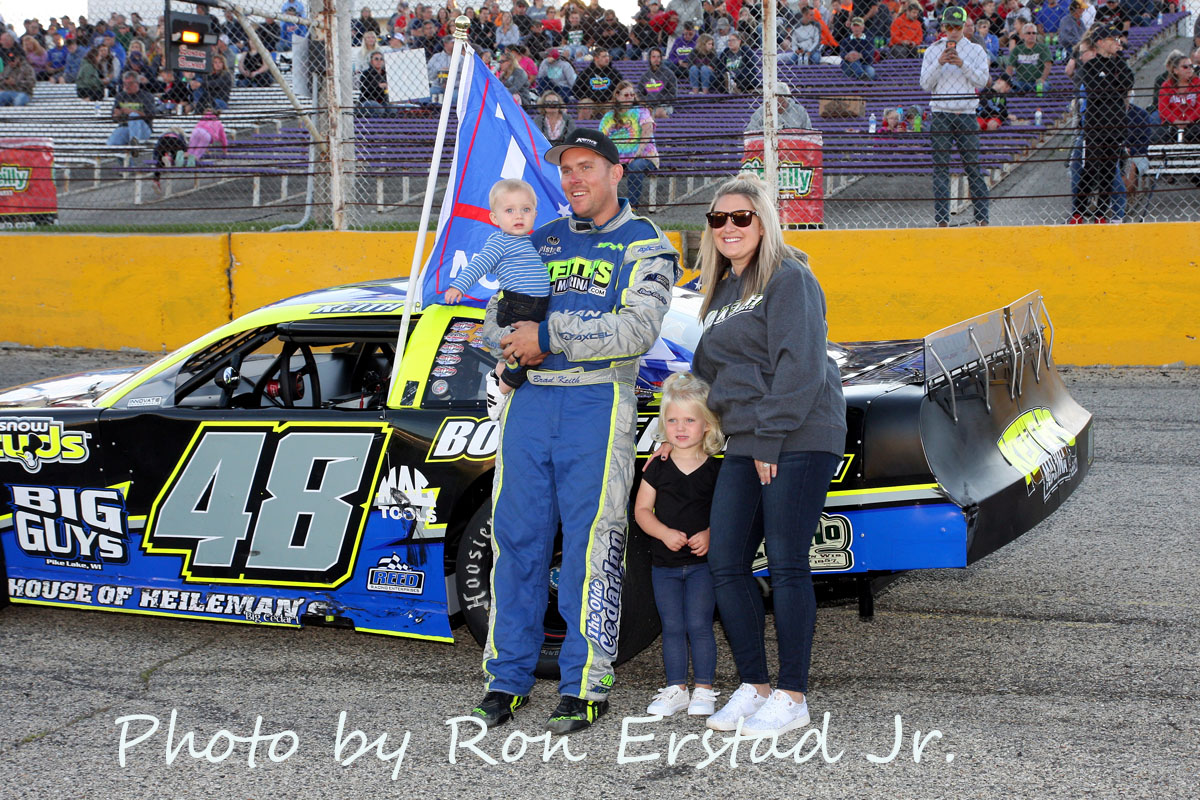