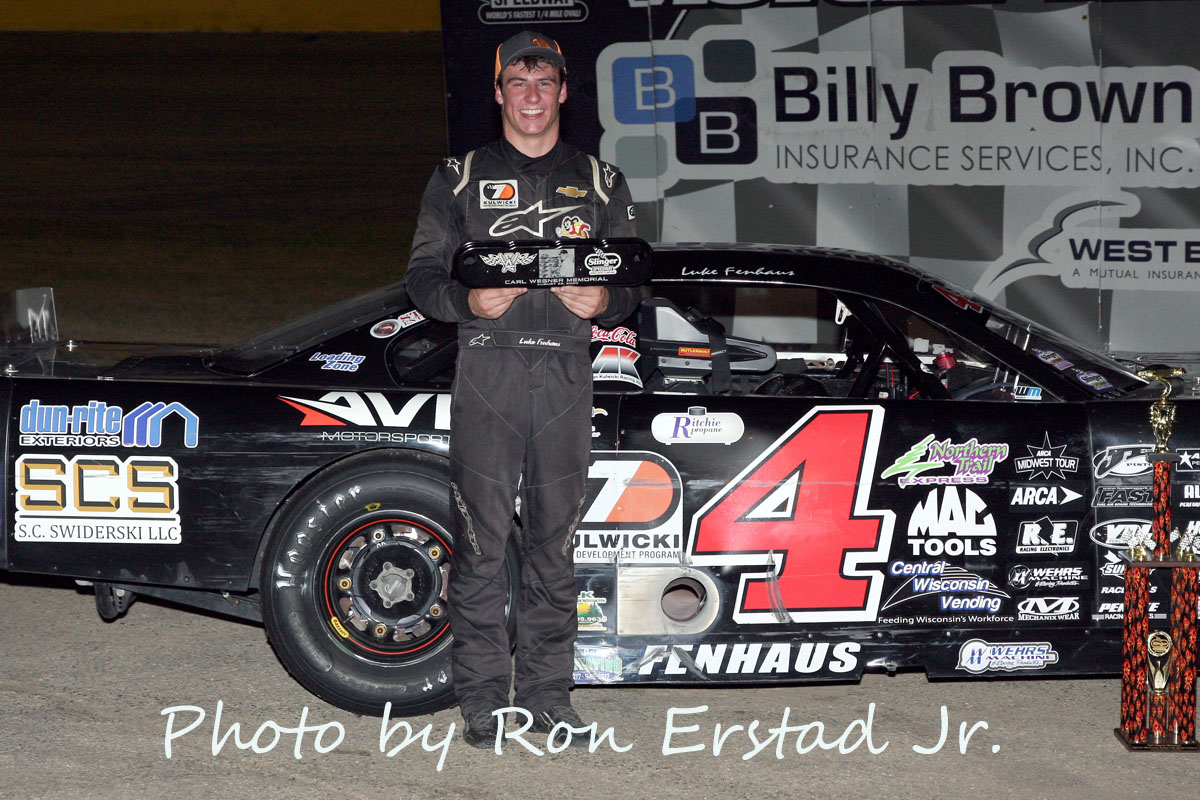 Nick Wagner and Dennis Prunty led the field to the green flag and Prunty used the outside groove to launch into the lead at the start. Rich Loch also used the high groove to grab second from Wagner who settled into third just ahead of Ryan Destefano and Luke Fenhaus who raced side by side over fourth place. Steve Apel, Alex Prunty, and Brad Keith were in tight formation directly behind the top five as the early laps clicked by. While Loch pressured Dennis Prunty for the lead, Fenhaus was persistent in the outside lane and he was able to work his way around Wagner and into third while DeStefano, Keith, Apel, and Alex Prunty all raced hard for the fifth spot. Fenhaus quickly closed on the lead duo as they raced nose to tail with Loch continuing to apply pressure to Dennis Prunty’s rear bumper. Loch’s car slipped slightly exiting turn two on lap 12 which opened the door for Fenhaus to stick the nose of his car to Loch’s inside and eventually take over second while Dennis Prunty continued to lead. Fenhaus then took his turn at Prunty for the lead and he made several inside looks off turn four as the back of Prunty’s car swung wide a bit exiting the turns. On lap 20, Fenhaus was able to edge his front fender far enough to the inside of Prunty’s left rear quarter panel to establish position on the inside and move to the lead. With Fenhaus inching away and Prunty moved to the high side, Loch took advantage and used the low groove to pull alongside and battle for second while DeStefano, Keith, Apel, and Alex Prunty all began to close ground on the leaders. Dennis Prunty’s car did not like the high groove he was forced to run in and DeStefano, Keith, Apel, and Alex Prunty all were able to pass by for position. Once into third, DeStefano tracked down Loch and moved into second place as the leader Fenhaus began to work lapped traffic. The first caution flag waved on lap 47 when Conrad Morgan’s car looped around in turn four while battling side by side with Mike Held.

Fenhaus chose the inside lane for the restart and was able to maintain the lead over DeStefano as racing resumed while Keith and Loch traded paint over third just ahead of Apel and Alex Prunty. Keith and Apel were both able to get around Loch for third and fourth respectively using the outside lane by lap 50 and two laps later the caution flag waved again when Mike Held brushed the frontstretch wall before riding the concrete hard into turn one in a shower of sparks. Fenhaus again chose the inside lane for the restart and this time had to fend off a serious high side challenge from DeStefano as Apel charged in front of Keith and Alex Prunty for third. Fenhaus was able to defend his lead and DeStefano tucked back in line behind him as the top six raced nose to tail. The final caution flag of the event appeared on lap 59 when Nick Wagner’s car broke loose off turn two and suddenly slowed collecting Brad Mueller’s car in the process. Fenhaus once again fended off the challenges of DeStefano as racing resumed but this time Apel was able to edge to the inside of DeStefano in a strong bid for second. The side by side racing for second between DeStefano and Apel allowed Fenhaus to begin to pull away as the laps wound down. The best battle on the speedway in the closing laps was between Alex Prunty and Rich Loch over fifth as Fenhaus, DeStefano, Apel, and Keith raced unchallenged in the top four spots. Fenhaus drove under the checkered flag to claim his first career Slinger Speedway super late model feature victory while DeStefano finished a strong second with Apel coming home in third. Brad Keith finished fourth while Alex Prunty edged Rich Loch for fifth. Dennis Prunty finished seventh while Chris Blawat, R.J. Braun, and Lowell Bennett rounded out the top ten finishers.

Nick Schmidt led all 25 laps en route to the victory in the super beez feature while Todd Buckley finished in second. Dale Kiley-Schaefer drove to a third place finish while Al Strobel and Brandon Tackes completed the top five finishers. Dale Kiley-Schaefer and Nick Schmidt were the winners of the super beez heat races and Kyle Stark was the fastest qualifier after circling the speedway in 13.615 seconds.

Karter Stark won a thrilling 25-lap slinger bees main event that featured a wild finish. Stark and Evan Hassler raced the final lap side by side with Stark appearing to edge Hassler at the stripe by inches in a photo finish. Drivers in the division race under a break out rule in which laps must not be completed in under 15.2 seconds with each driver receiving one warning before being disqualified. On the final lap both Stark and Hassler broke out with their lap times and because it was Stark’s first break out which constitutes a warning while Hassler received his warning a few laps earlier, Stark was declared the winner. Hassler’s final lap breakout relegated him to a disqualification status meaning Tom Elsinger Jr. finished second ahead of Misty Benn in third. Brady Held finished fourth and Ricky Gebhard was fifth. Evan Hassler won the first slinger bee heat race and Brady Held was the winner of the second heat race. Karter Stark was the fastest qualifier after turning in a lap in 15.234 seconds.

Tracy Thiemer drove the SideTracked of Oak Creek entry to victory in the Bar Car race and Rick Bruskiewicz won the Figure 8 race when last lap leader Ryan Lovald spun off the final turn and stopped just short of the finish line. 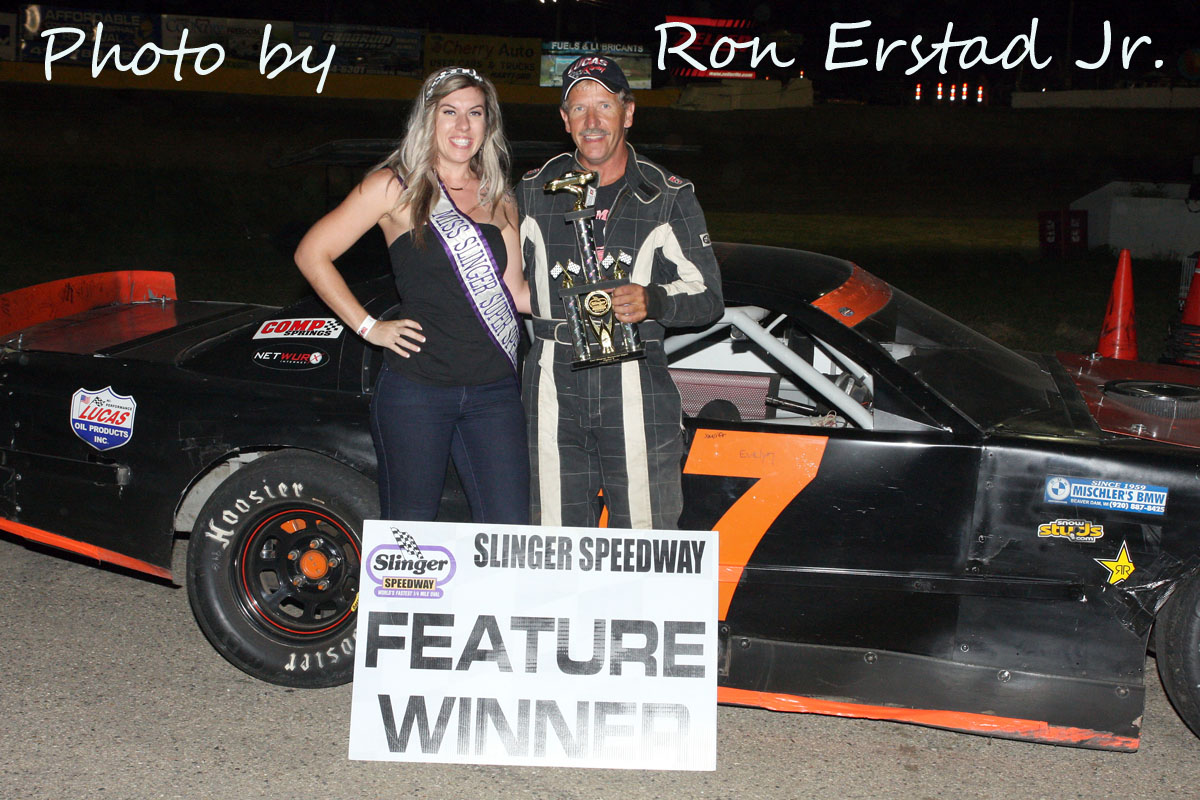 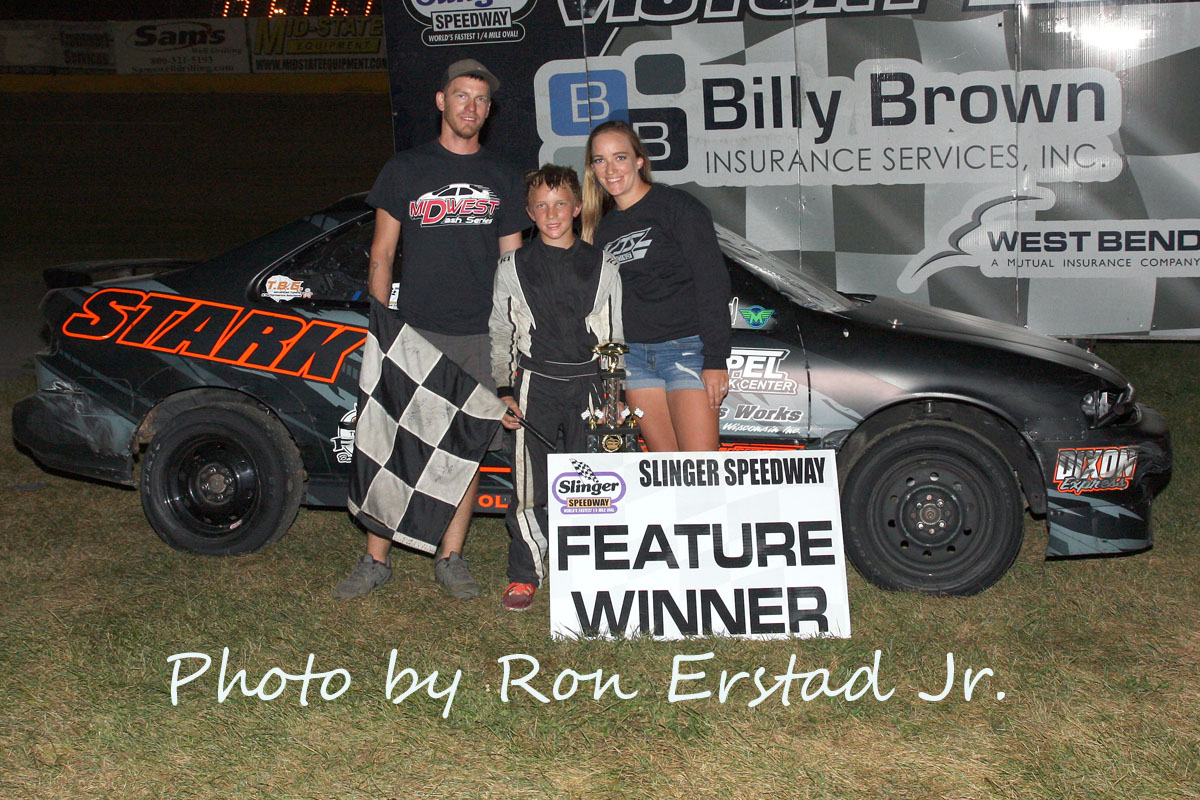 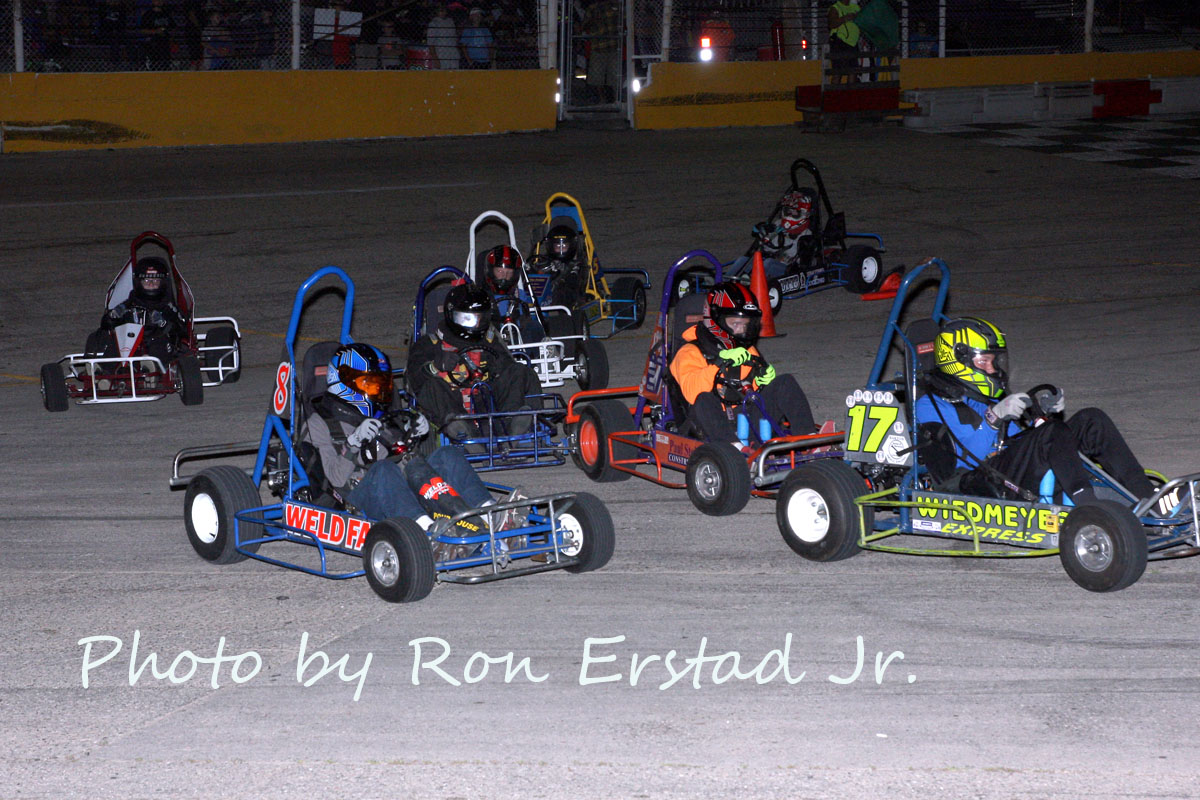 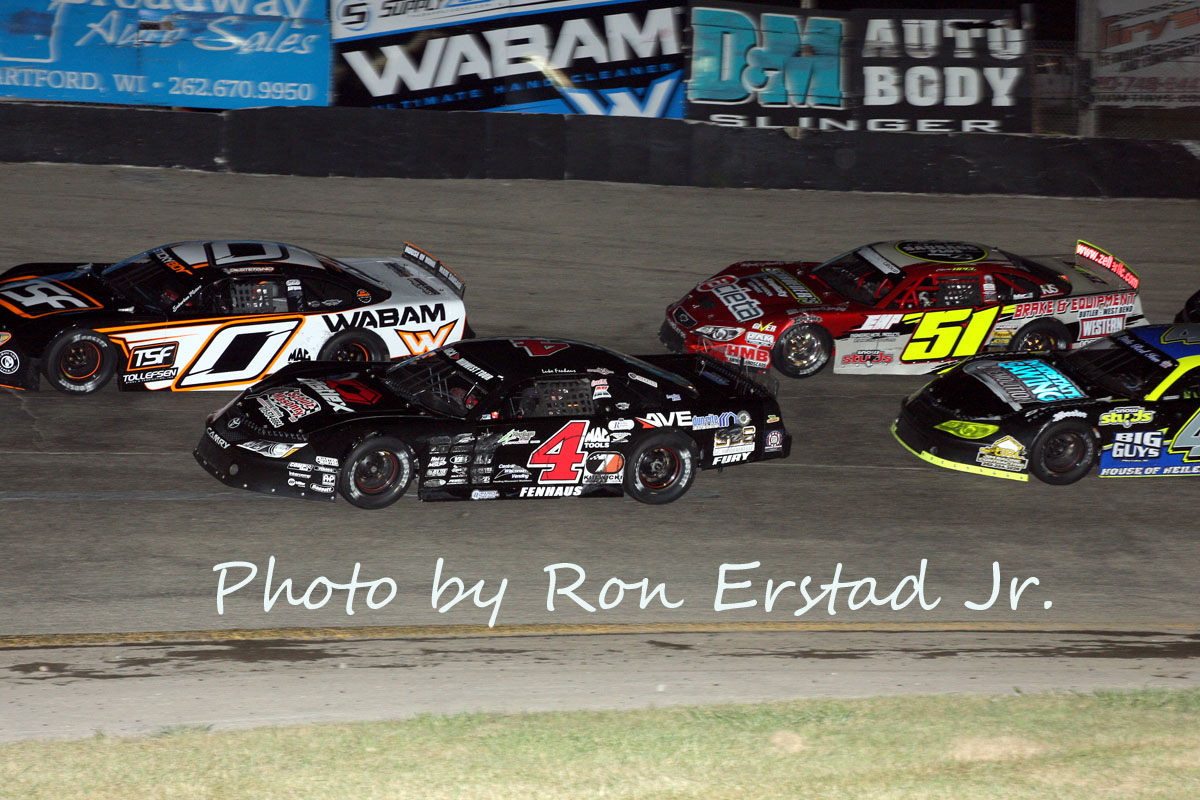 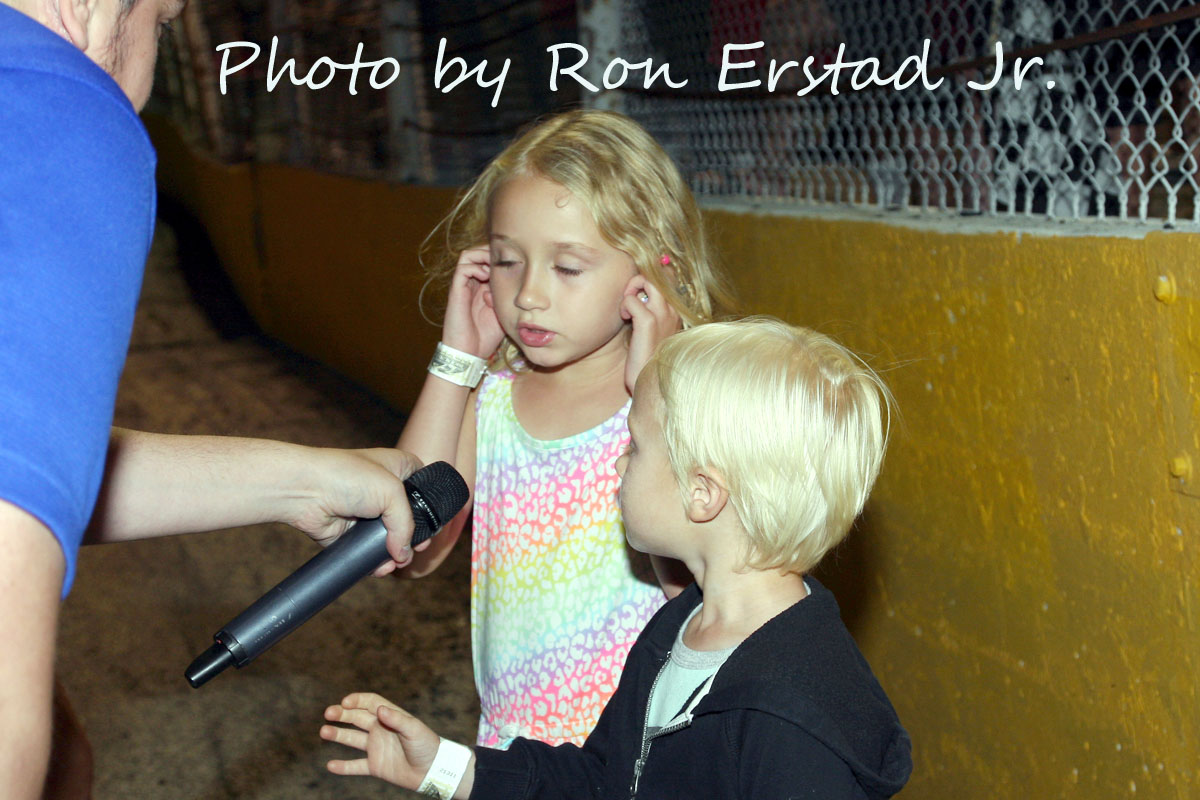 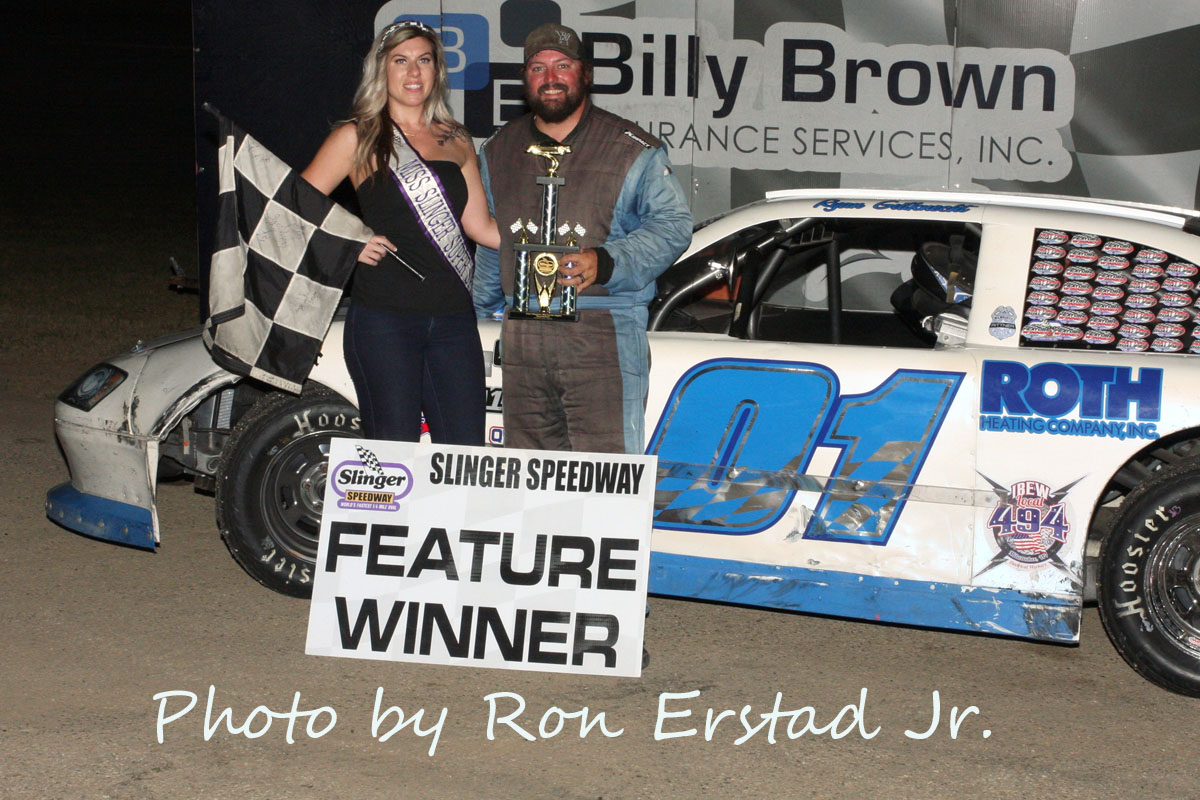 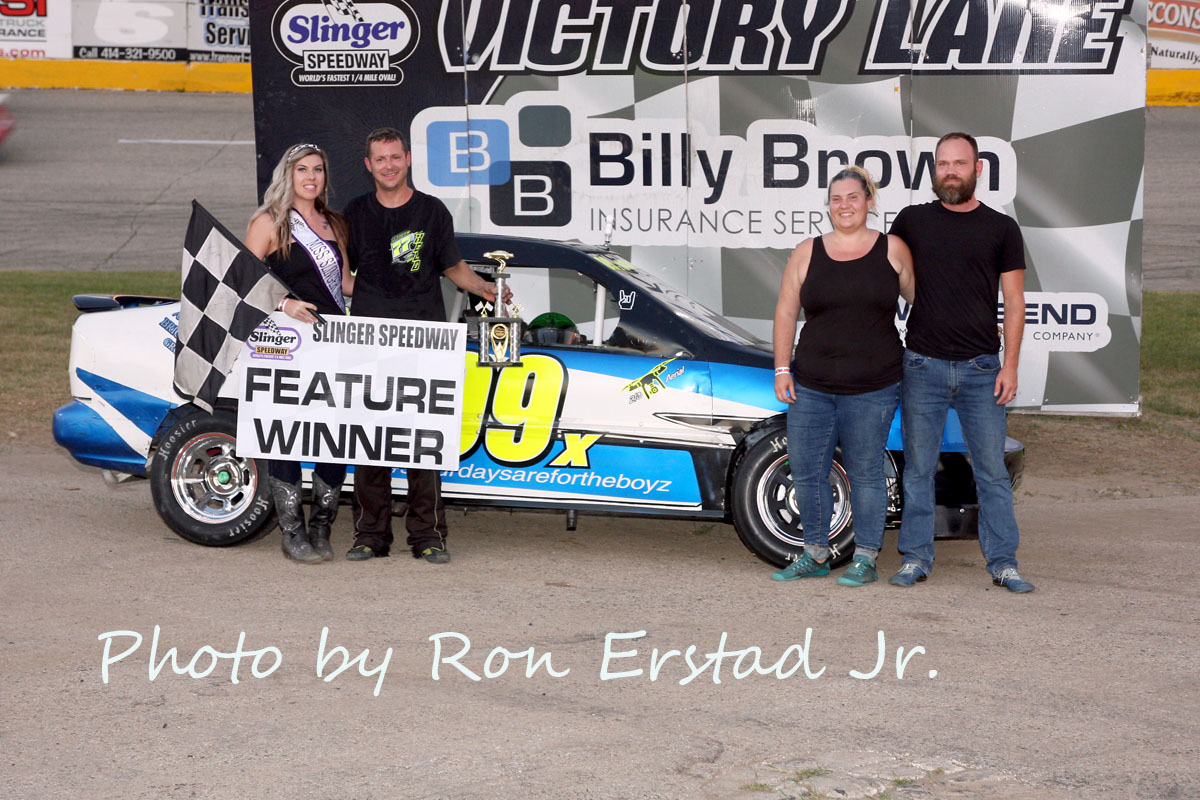 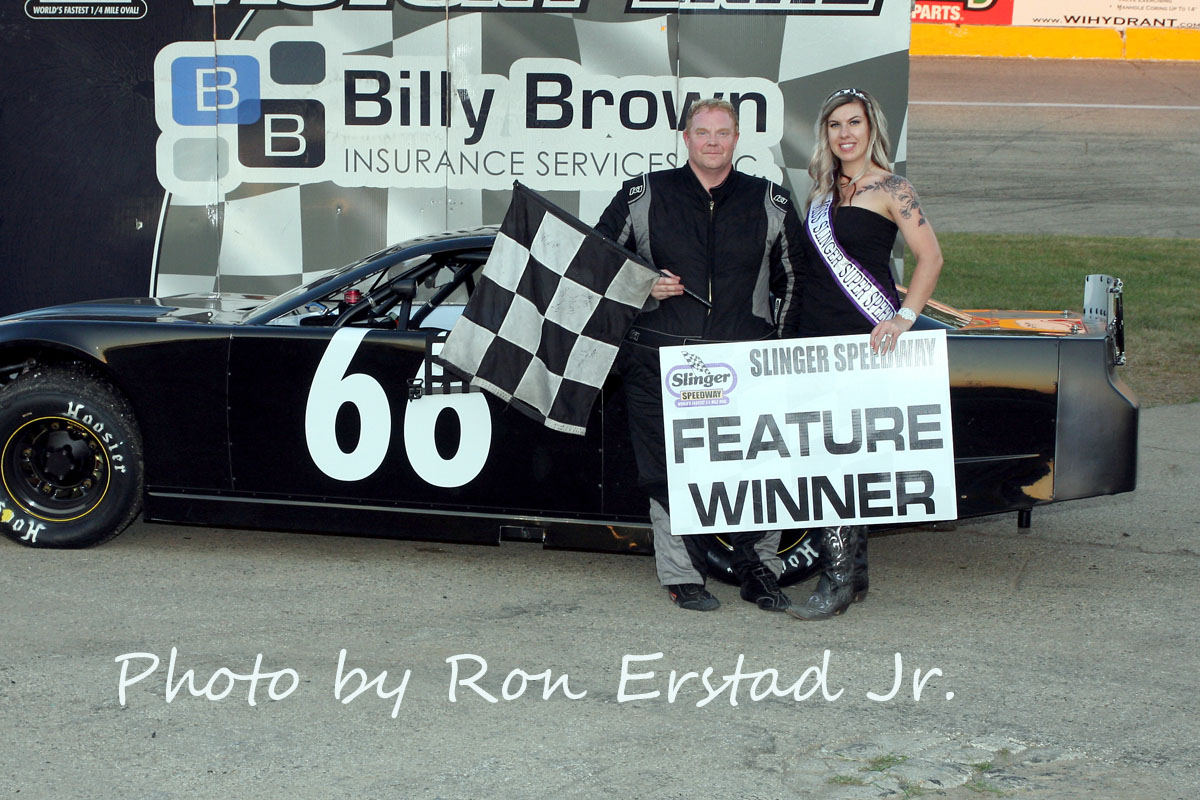 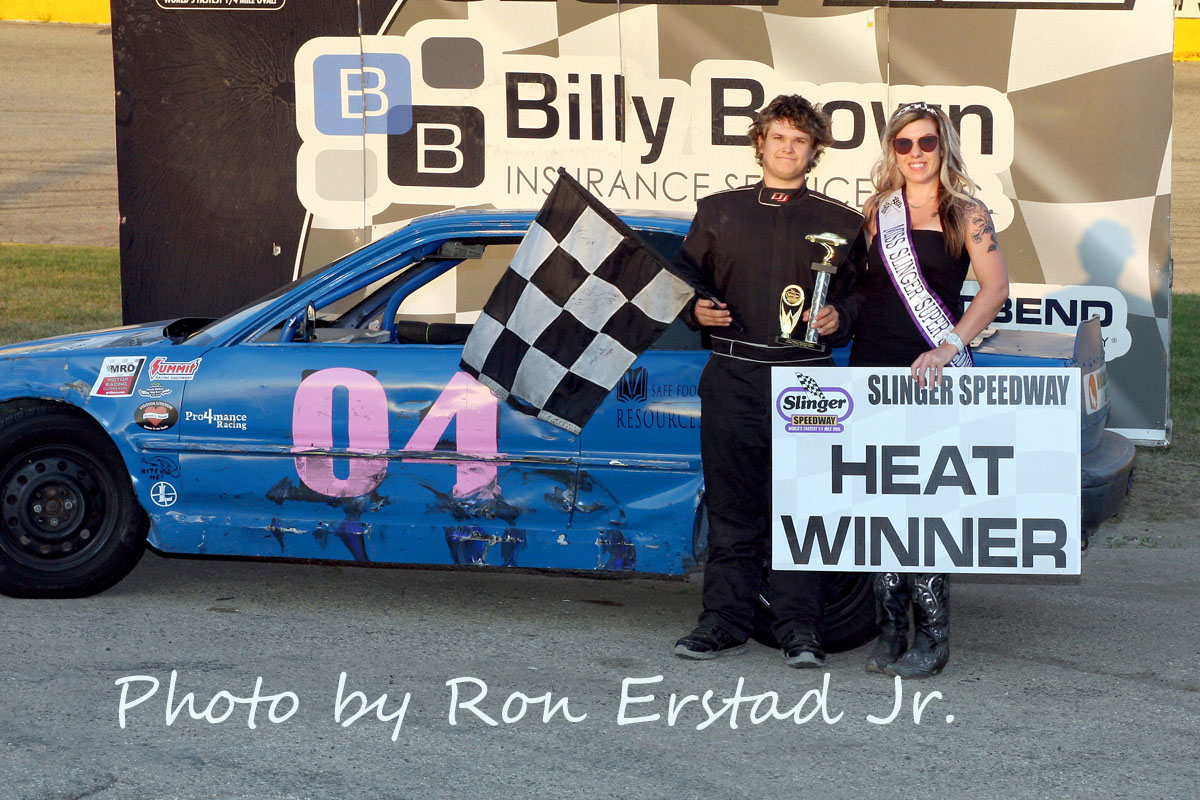 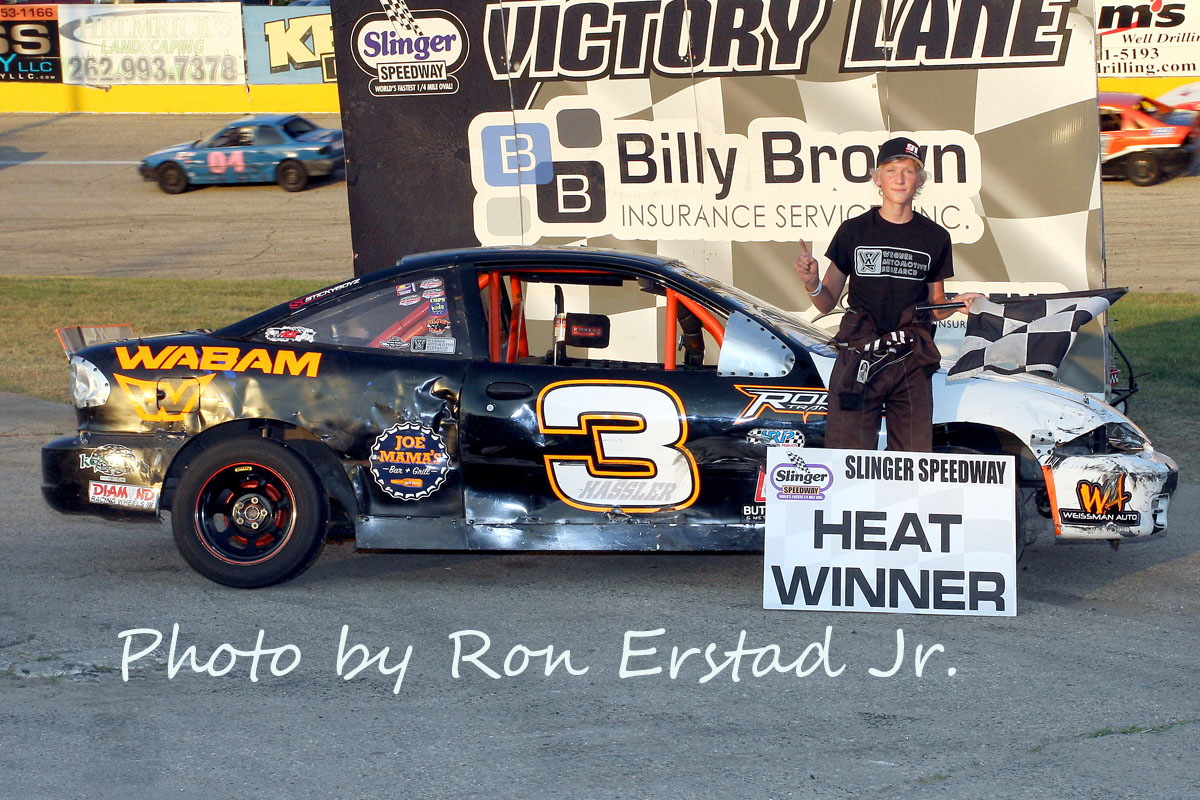 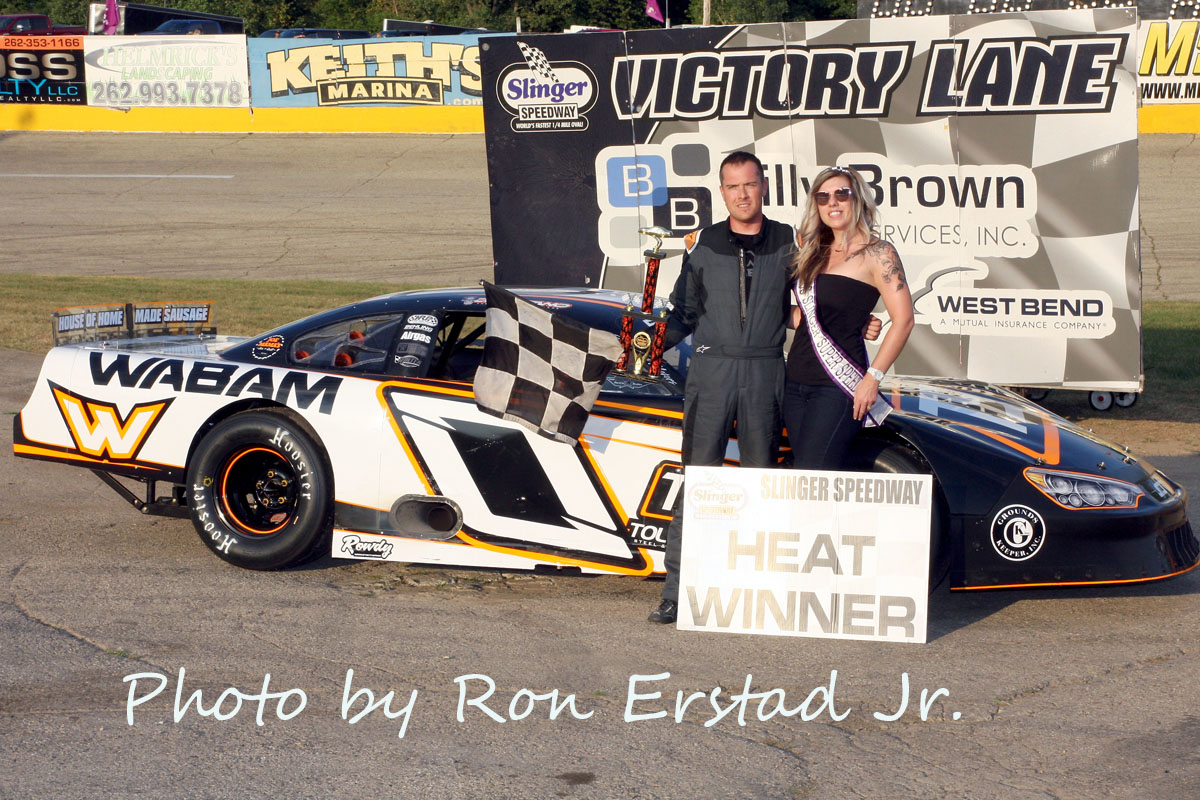 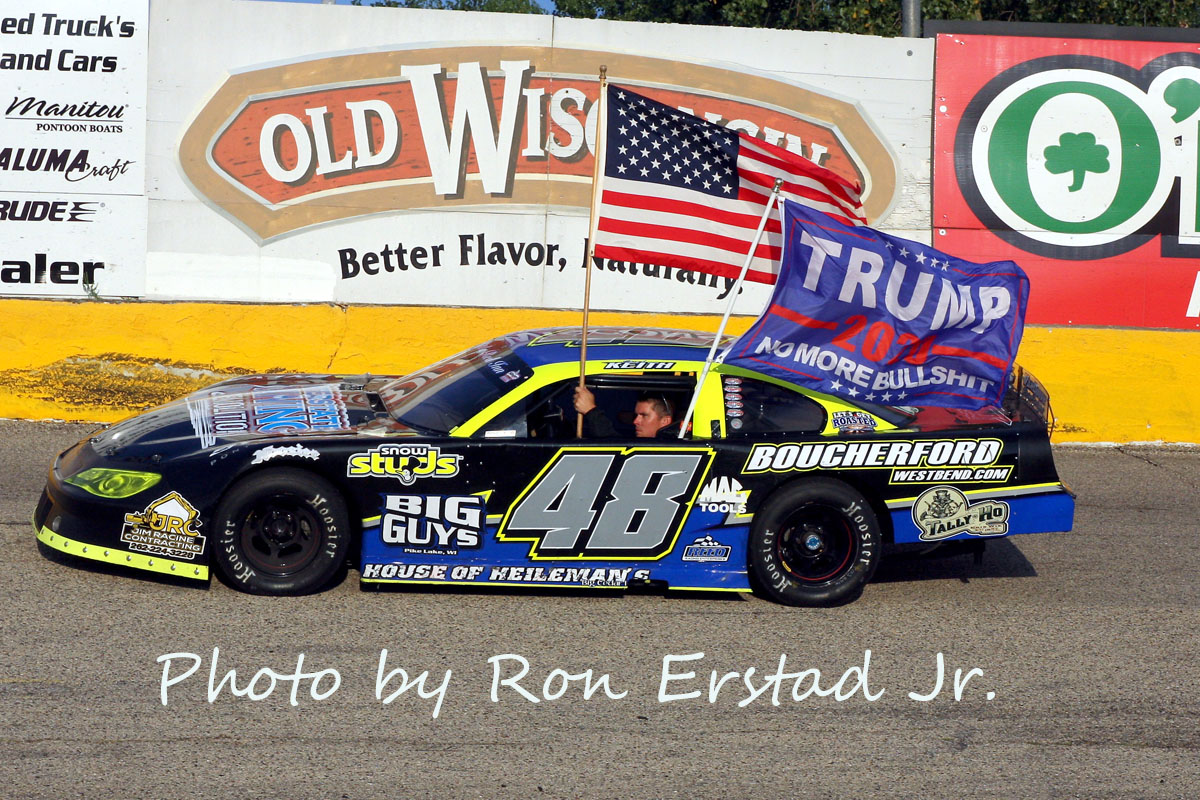 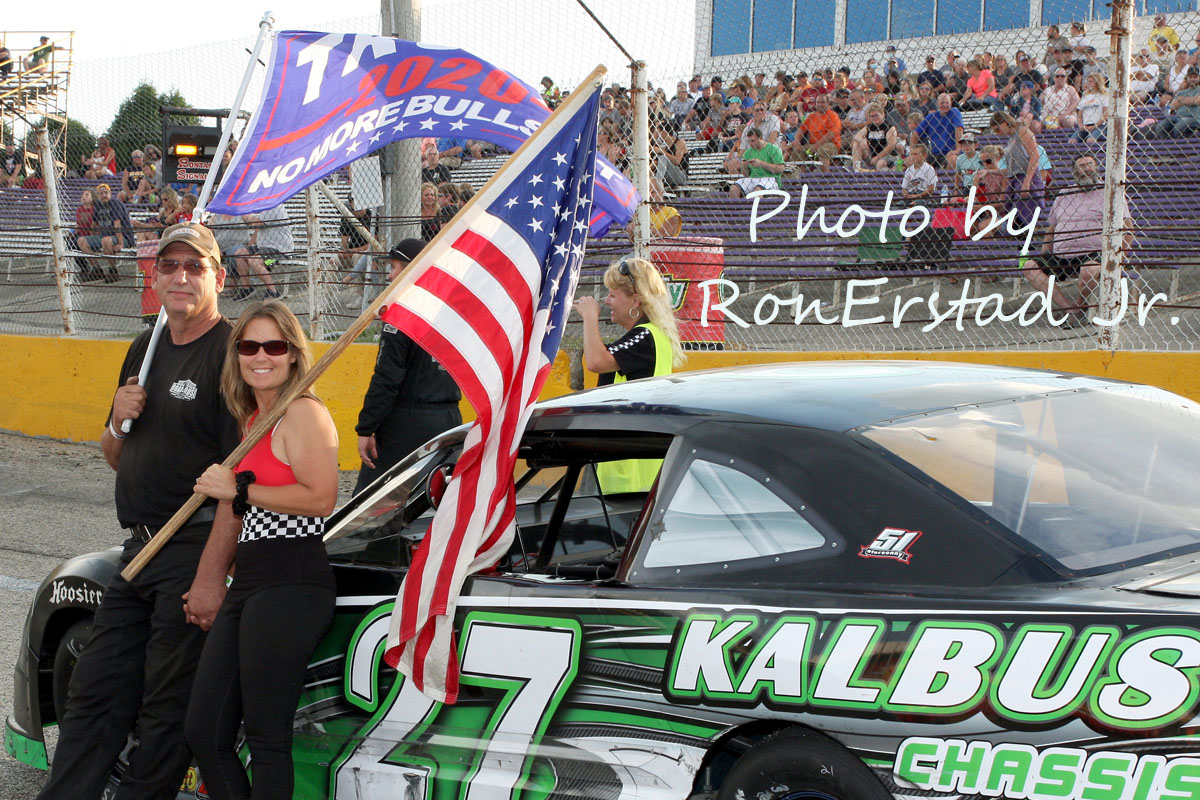