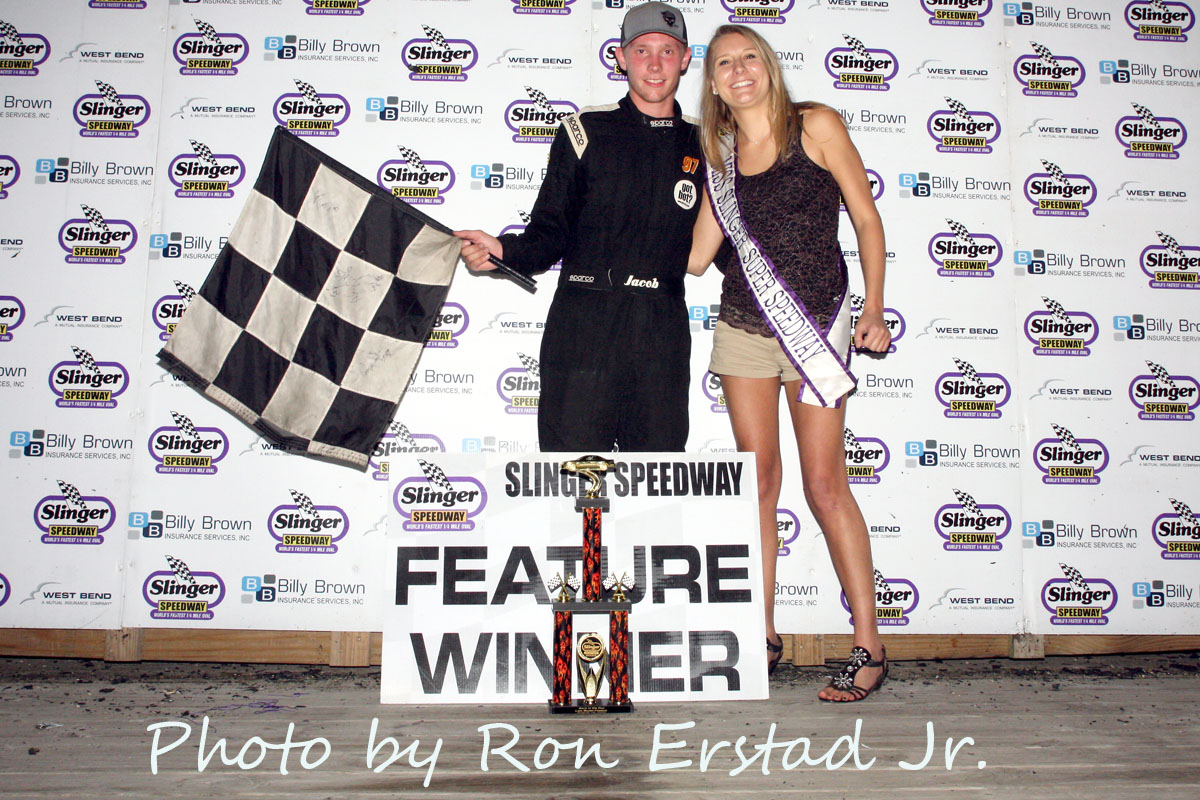 Slinger, Wis., Aug 16—Defending late model track champion Jacob Nottestad took the lead on lap 33 of the 50-lap late model main event Sunday night at the Slinger Super Speedway and then turned back challenges from Ryan Gutknecht to drive to the victory.

“That was unreal passing everyone on the outside there,” Nottestad said describing his many outside lane passes to get to the lead, “It just shows how good of a car we have. We got to run some good laps there and really show our ability.”

“I didn’t get the laps I wanted and got a little sideways getting in (to the turns) and he (Nottestad) had so much pull off the corner I couldn’t get to him, he’s pretty darn good,” Gutknecht stated following his runner-up finish.

Tom Berens and Ryan Gutknecht brought the field to the green flag and Gutknecht was able to charge to the early lead with Berens settling into second with Tom Jasinski, Zach Prunty, Cole Thomas, Tyler Schley, Jakob Hassler, and Jacob Nottestad all racing for position behind them. Nottestad used the outside lane to gradually work his way forward up to third place by the time the first caution flags appeared for single car spins on laps 13 and 14. Gutknecht continued to lead over Berens and Nottestad as the field prepared to return to racing with Jasinski, Tyler Schley, Prunty, and Nick Egan rounding out the top seven. Berens was able to work his way around Gutknecht for the lead a few laps after racing resumed by using the high side of the speedway. Nottestad also took to the high side and was able to pass Gutknecht for second while Tyler Schley also got around Gutknecht on the high side for third. Behind the top four Zach Prunty and Tom Jasinski battled intensely over the fifth spot with Jasinski hanging onto it despite heavy pressure. Nottestad used the outside again to get alongside Berens for the lead and the two raced side by side for several laps which allowed Schley and Gutknecht to close in from third and fourth. Nottestad was able to edge ahead for the lead on lap 33 while behind the top four Jasinski, Prunty, Jakob Hassler, and Nick Egan staged a hard fought battle over fifth just before the caution flag waved for debris on the track on lap 35. Nottestad chose the inside lane for the restart and was able to maintain the lead over Berens as racing resumed with Schley and Gutknecht in their tire tracks. The battle up front came to a head on lap 37 when contact between Schley and Beren’s cars sent Berens around in turn four collecting the car of Hassler in the process. Berens and Schley were able to continue but were sent to the rear of the field while Hassler’s car exited the speedway with damage. Nottestad and Gutknecht renewed their battle for the lead as racing resumed while Prunty and Jasinski continued to race hard over third while Jerry Eckhardt joined the lead group as he battled with Egan over fifth. Joe Shelby and Jack Stern race directly behind Eckhardt and Egan ready to move into the top five themselves. With two laps to go Egan took possession of fifth as the cars of Shelby and Eckhardt made contact in turn four sending Eckhardt spinning around, collecting the cars of Cole Thomas and Tyler Schley in the process and drawing the caution flag. Nottestad was able to fend off Gutknecht for the final two laps and score the victory while Zach Prunty finished a strong third. Tom Jasinski also turned in a strong performance with a fourth place finish while Jack Stern finished fifth. Nick Egan took the checkered flag in sixth place ahead of Cole Thomas and Dan Heying in seventh and eighth while Tyler Hromadka and Mitchell Haver completed the top ten.

Tom Berens and Nick Egan were the winners of the late model heat races while Jacob Nottestad timed in with a lap at 12.158 seconds as the evening’s fastest qualifier.
Jay Kalbus took the lead from Andrew Meyerhofer on lap 26 of the 35-lap sportsman feature and then held off Meyerhofer to capture the victory. Jake Schraufnage finished close behind in third place while Brian Holtz and Bobby Gutknecht rounded out the top five finishers. Dan Calhoun won the opening sportsman heat race and Bobby Gutknecht was the winner of the second heat race. Jay Kalbus set fast time by touring the speedway in 12.656 seconds.

Steven Schulz outdueled James Swan in lapped traffic to take top honors in the 30-lap modified main event. The pair raced the final laps side by side until encountering the lapped machines which forced Swan to check up slightly on the final lap allowing Schulz to charge to the victory. Bill Prietzel finished third and locked up the 2020 Slinger Track Championship for the modified division. Mike Sandholm finished in fourth place and Justin Okruhlica was fifth. Bill Prietzel also was the winner of the modified heat race while Steven Schulz was the fastest qualifier with a lap completed in 12.267 seconds.

Al Strobel took command of the 25-lap super beez feature on lap 8 when early leader Todd Buckley lost a wheel which forced second place runner Steve Zoromski to leave the track for repairs. When the third place car of Scott Hoeft suffered a flat tire during the caution flag, Strobel became the leader. Strobel then held off Dale Kiley-Schaefer over the final laps to take the win. Brandon Tackes finished third while Steve Zoromski and Scott Hoeft rebounded to finish fourth and fifth respectively. Super beez heat race victories were claimed by Dale Kiley-Schaefer and Al Strobel while Todd Buckley set fast time with a lap completed in 13.624 seconds.

Mark Fogel Jr. scored a clean sweep in the Slinger Sixers division as he won the feature event, his heat race, and set fast time on the night. Joshua Zacharias finished in second place in the main event ahead of Marty Tackes and Sean Worman in third and fourth place respectively. Rick Buss finished fifth.

To make up for earlier rain-outs, two Bar Car events were contested with Greg Chiconas winning the first one driving the Finish Line Bar entry and Sherry Elsinger winning the second race aboard the Raceway Pub and Grill entry. Al Roberts drove his 1971 Chevy pick-up to the Spectator Eliminator race win by defeating Carl Trapp’s 1972 Chevy Nova in the finals. 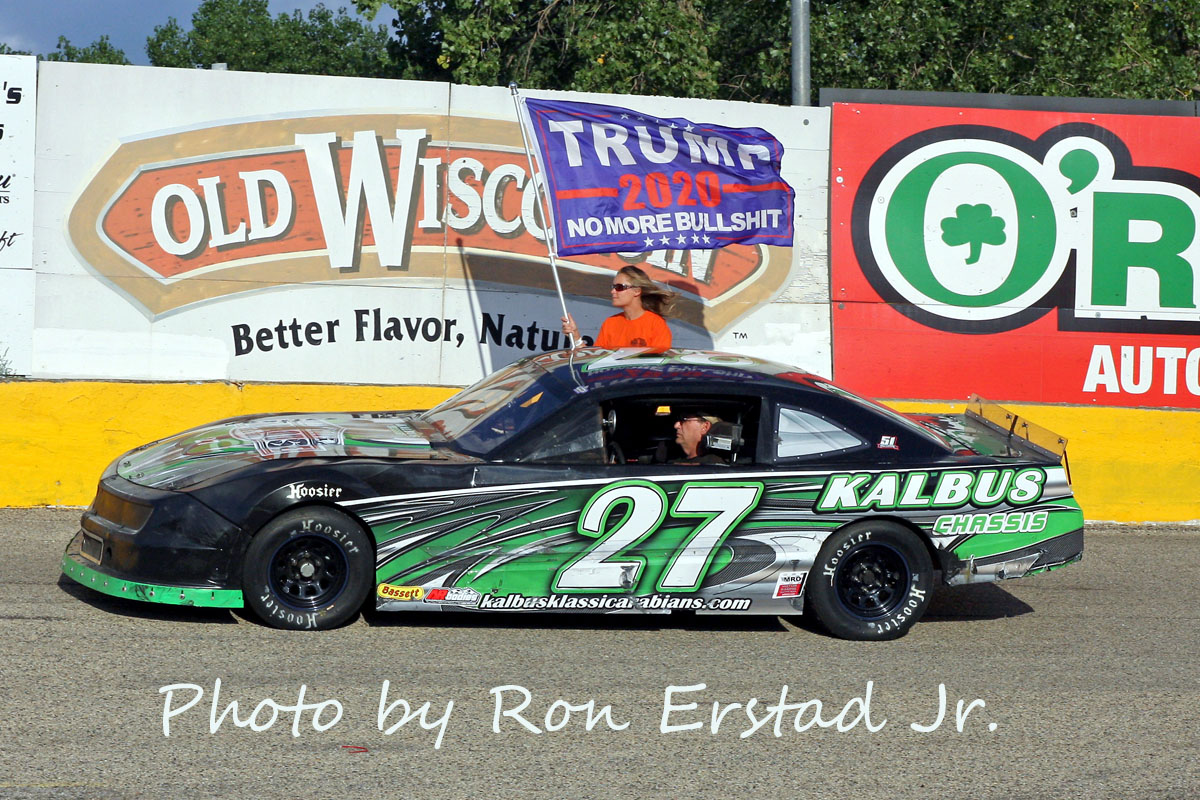 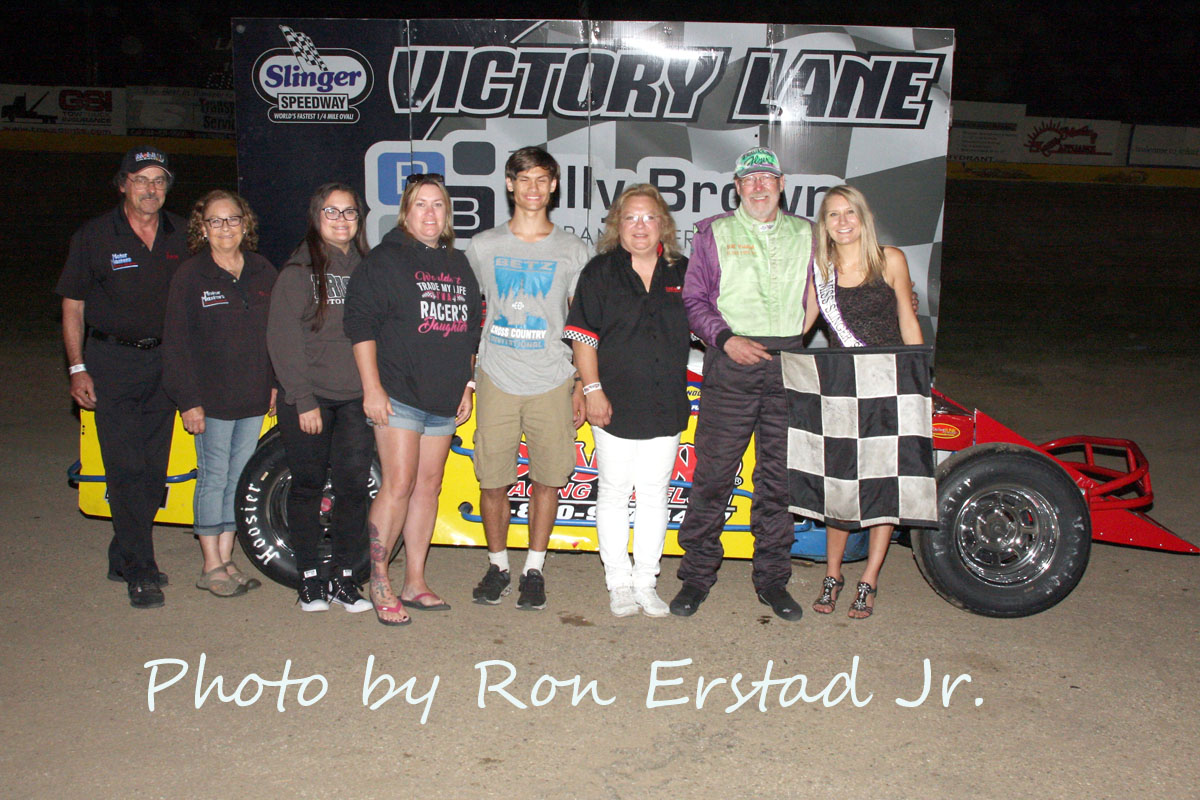 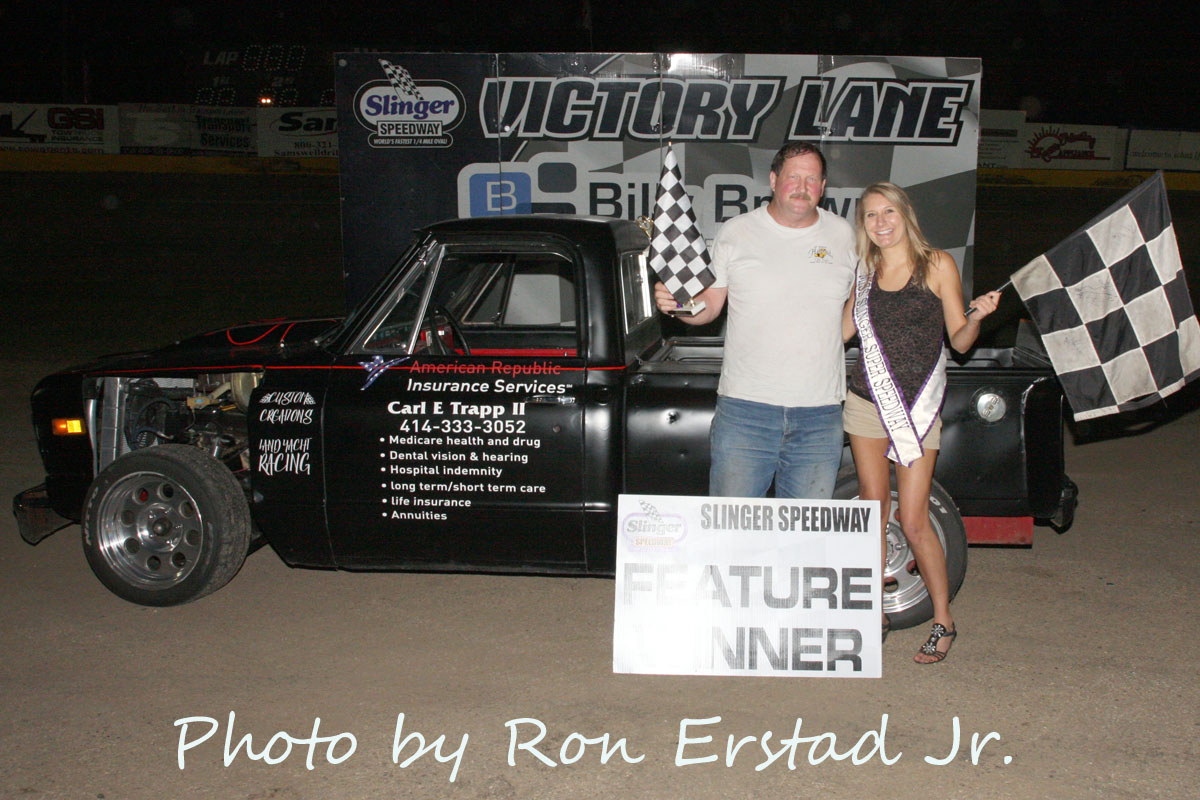 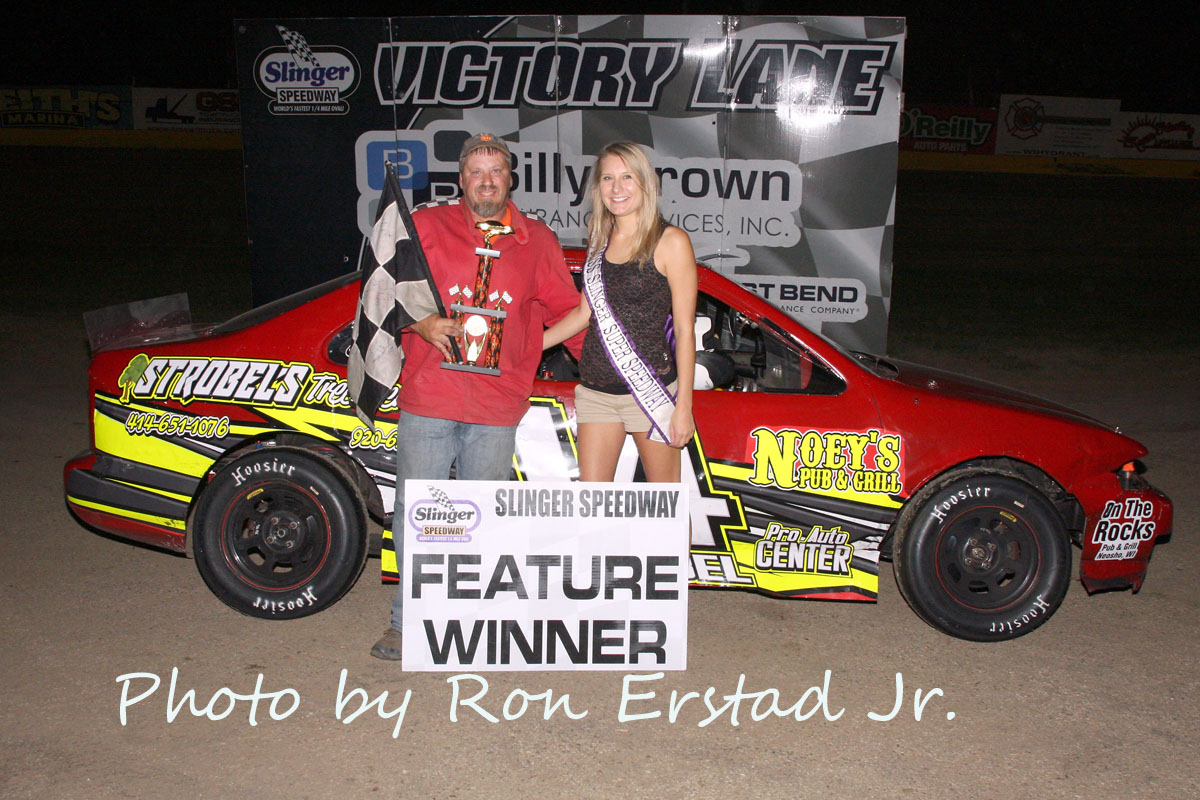 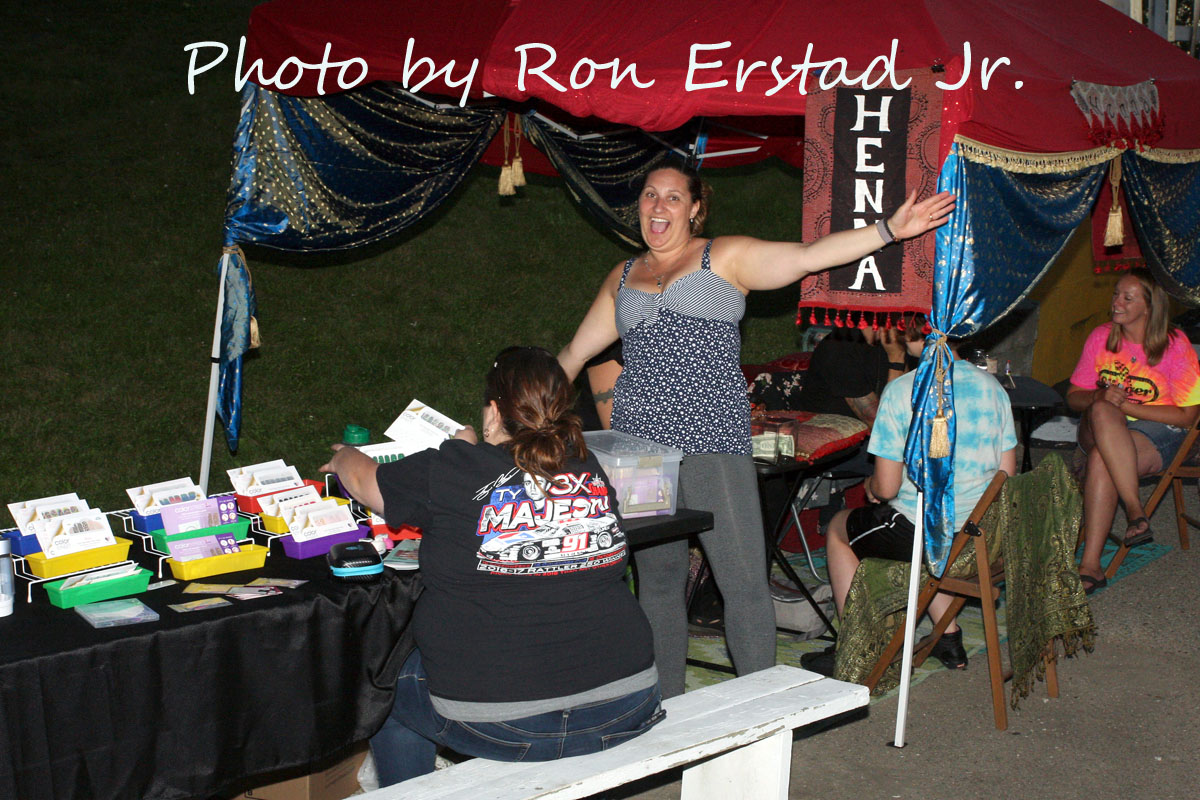 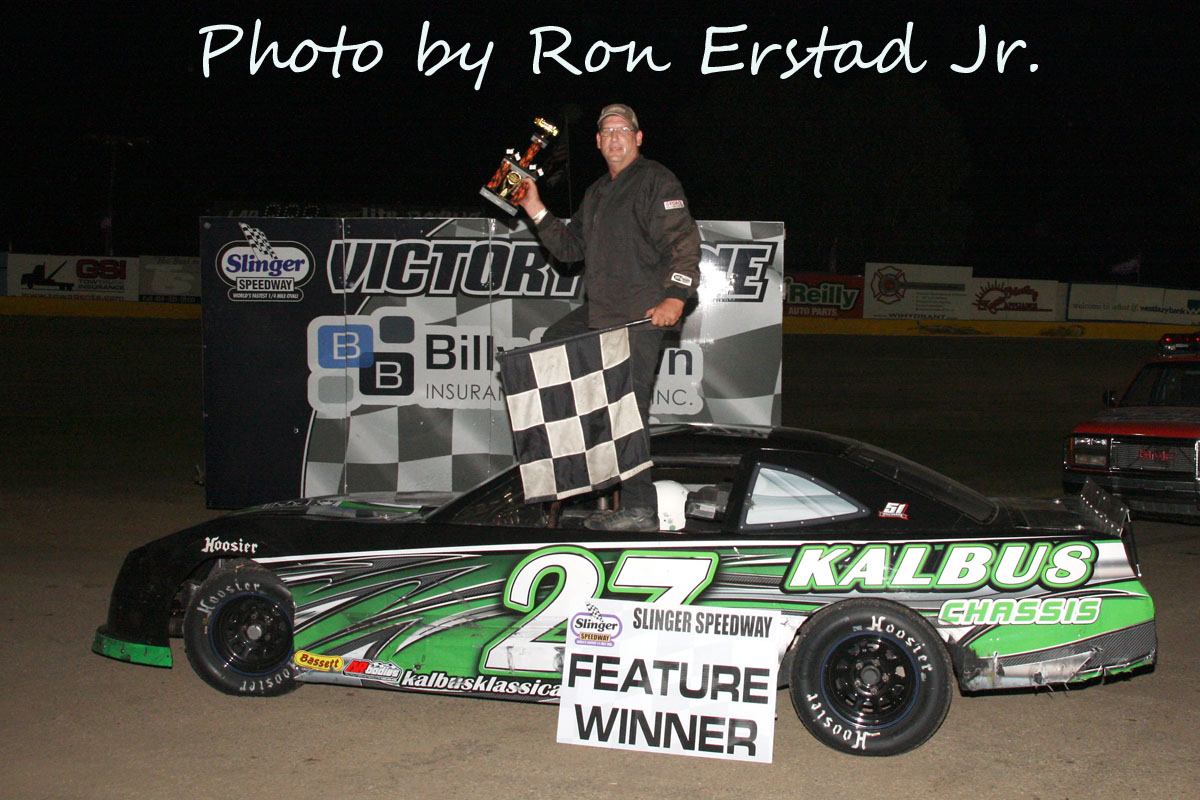 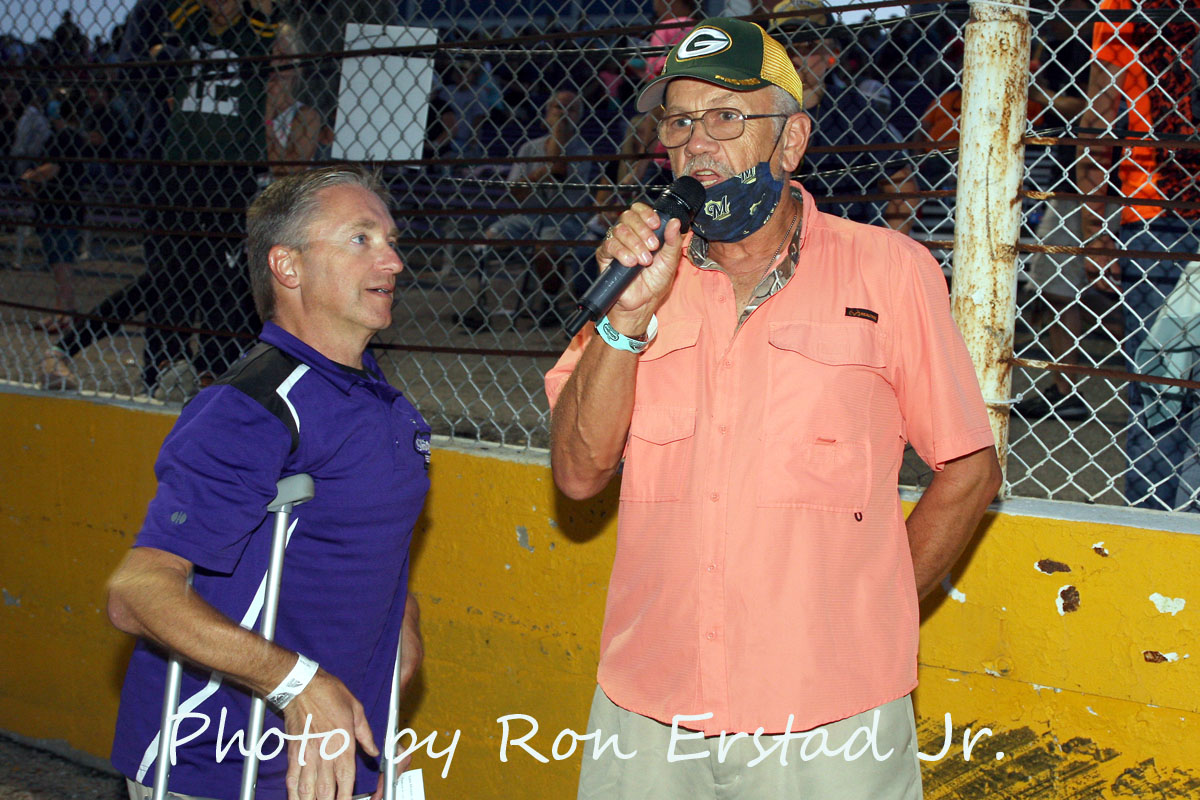 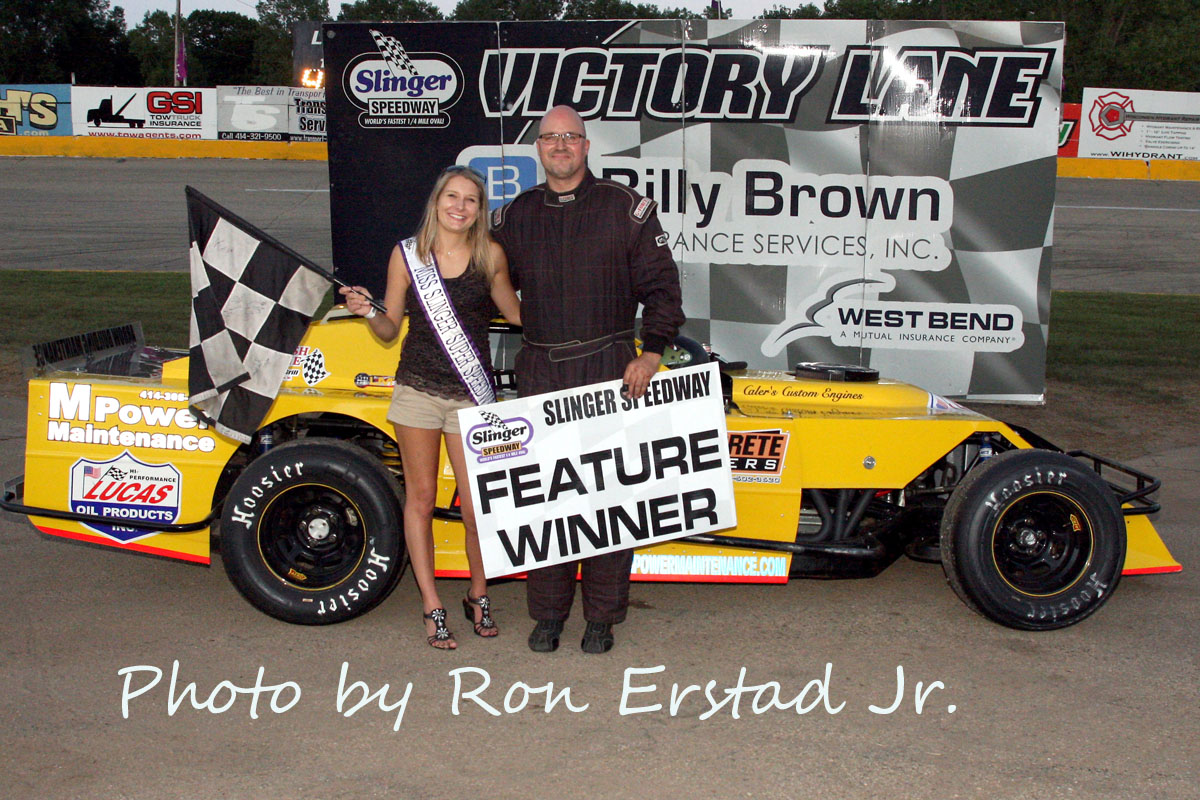 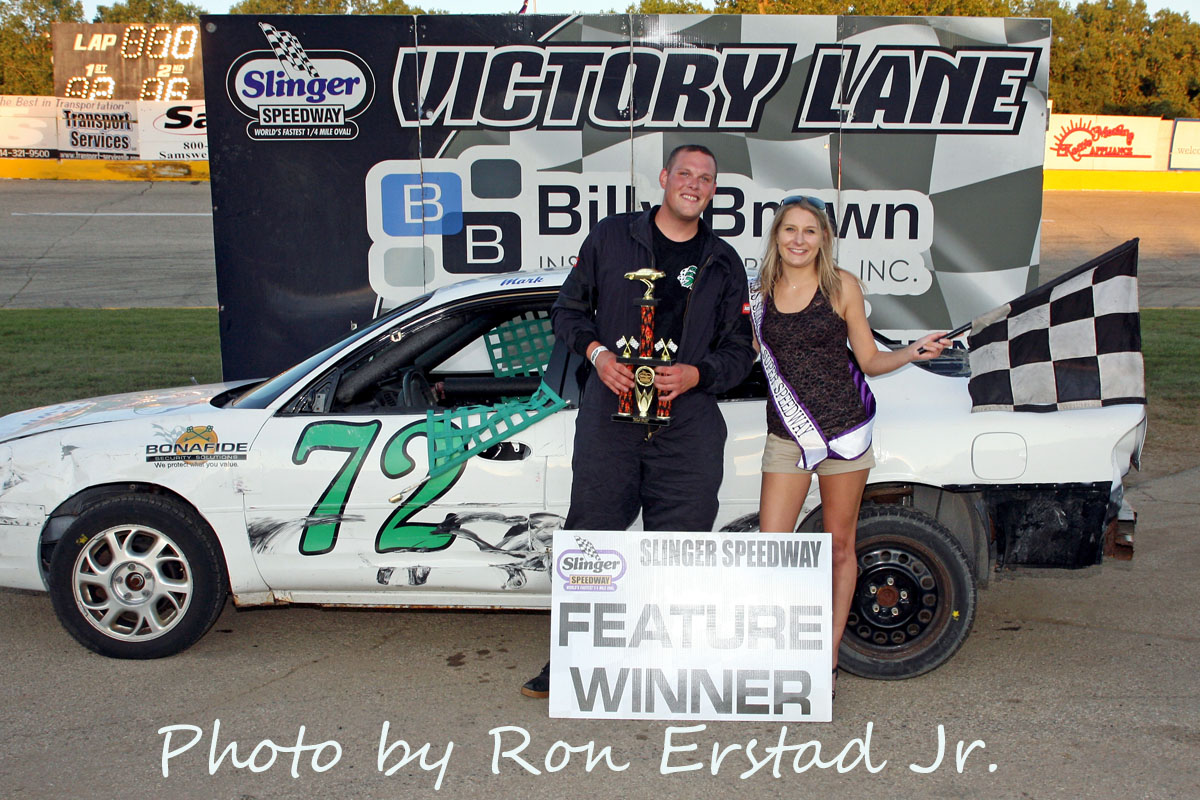 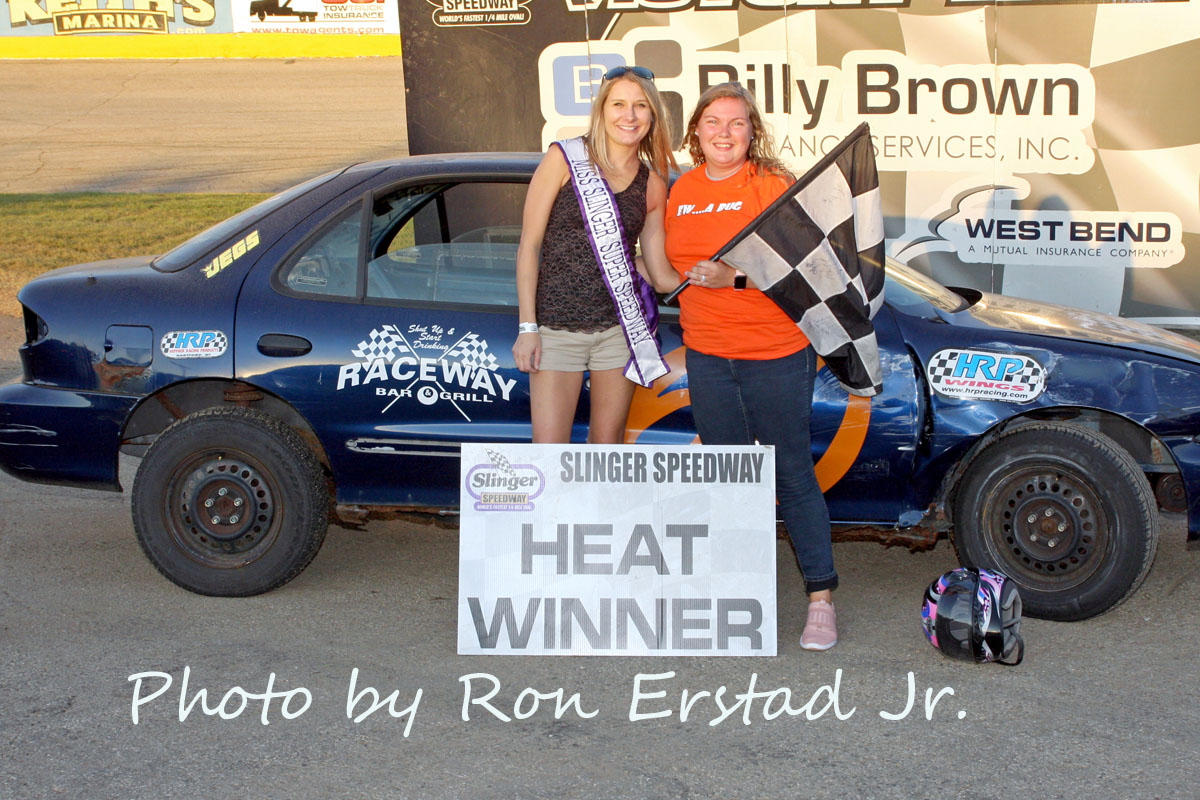 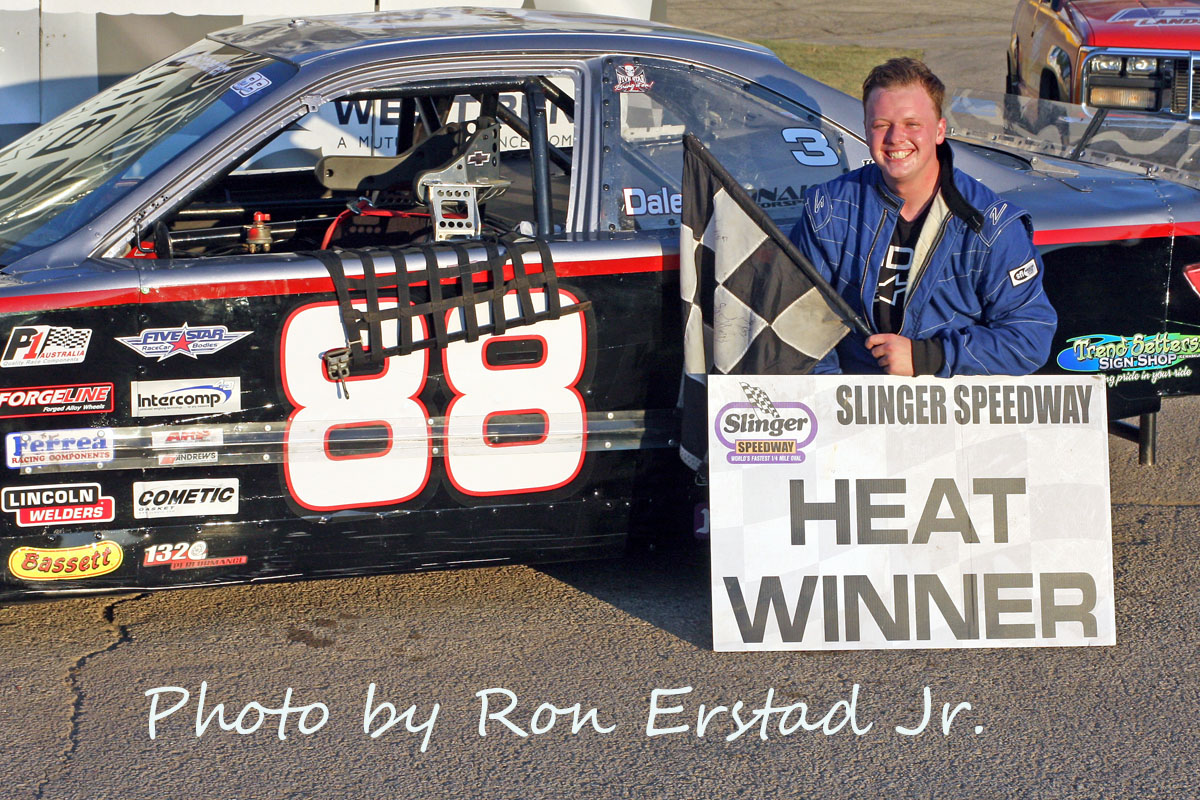 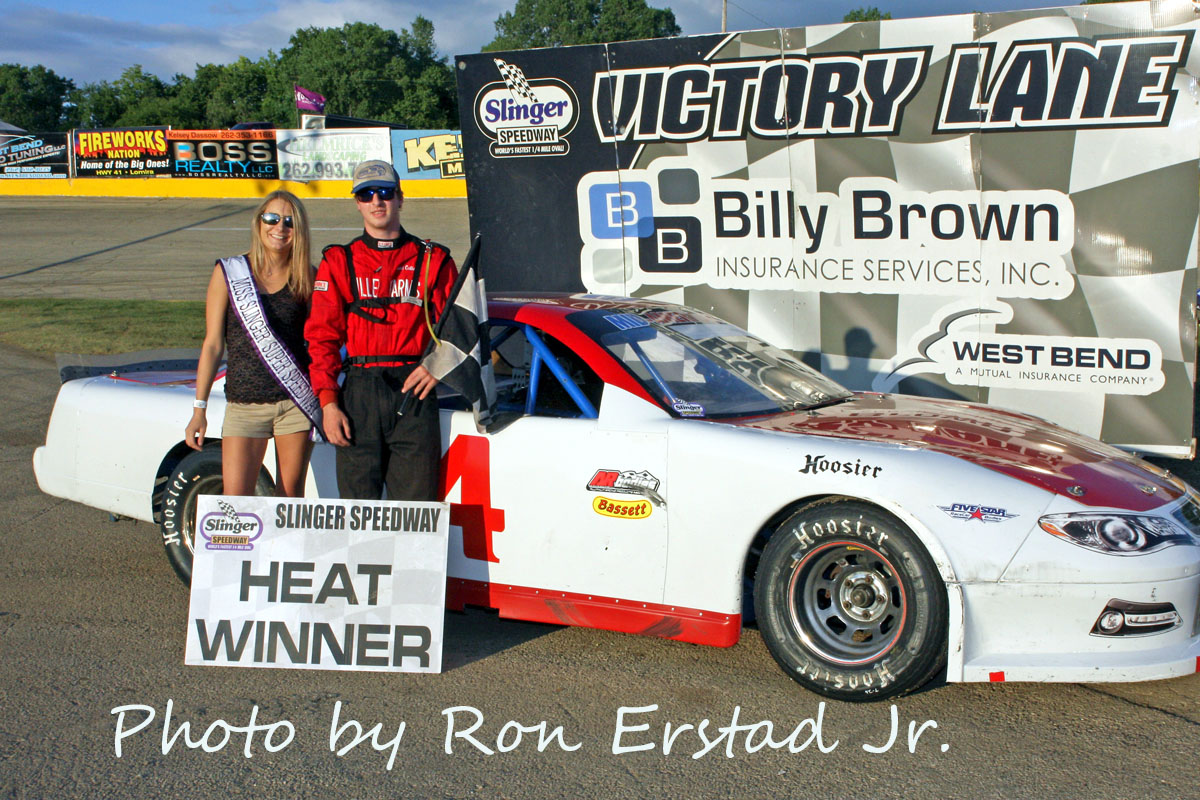 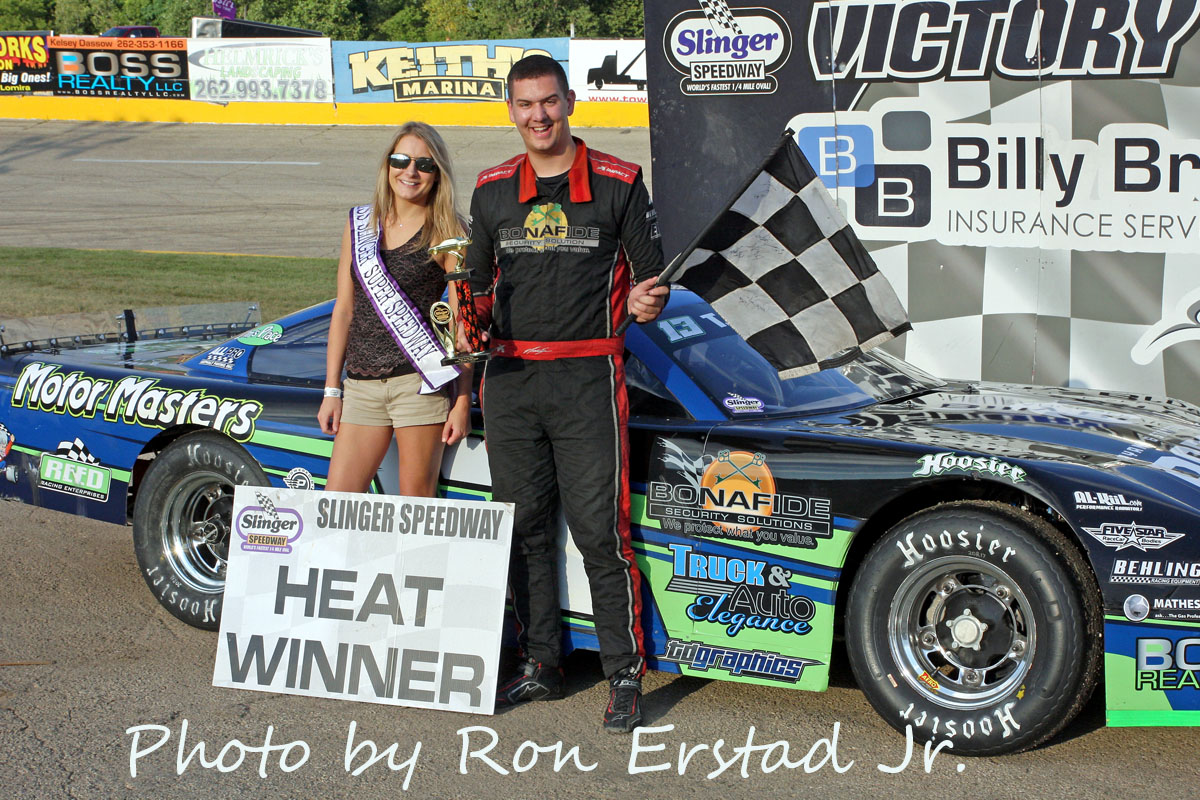 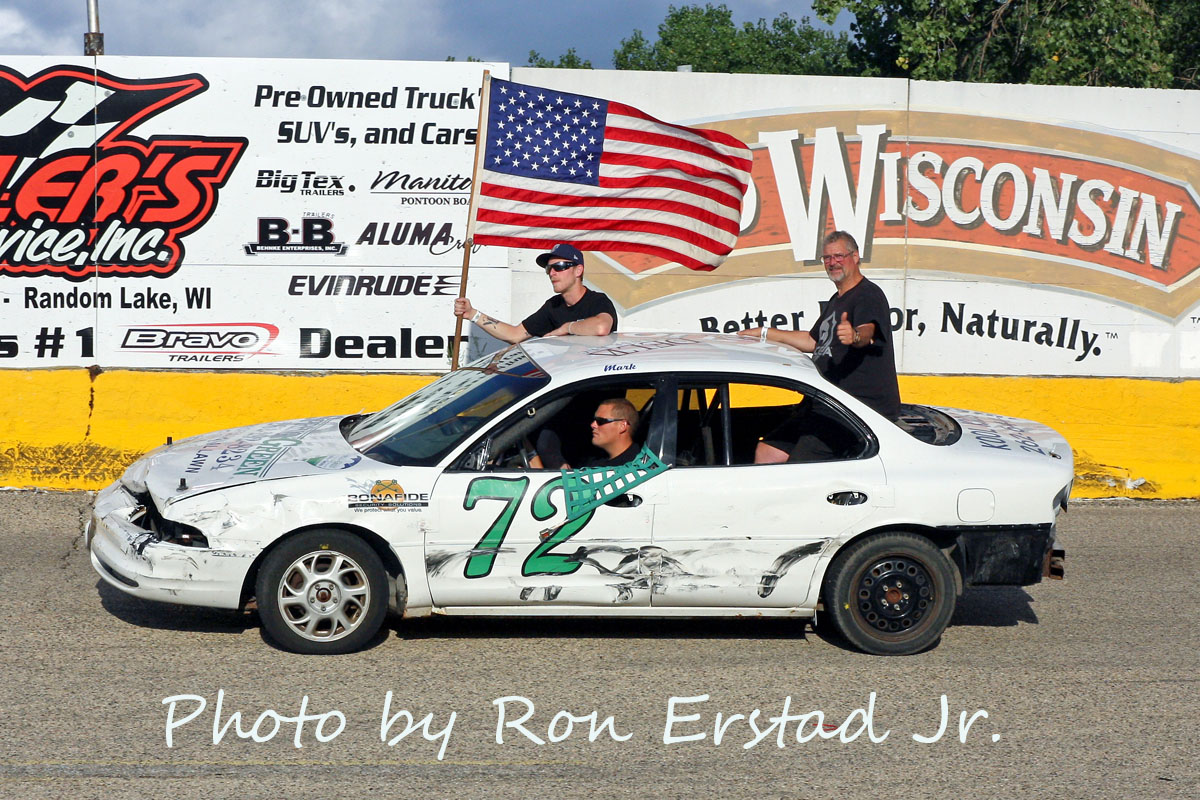