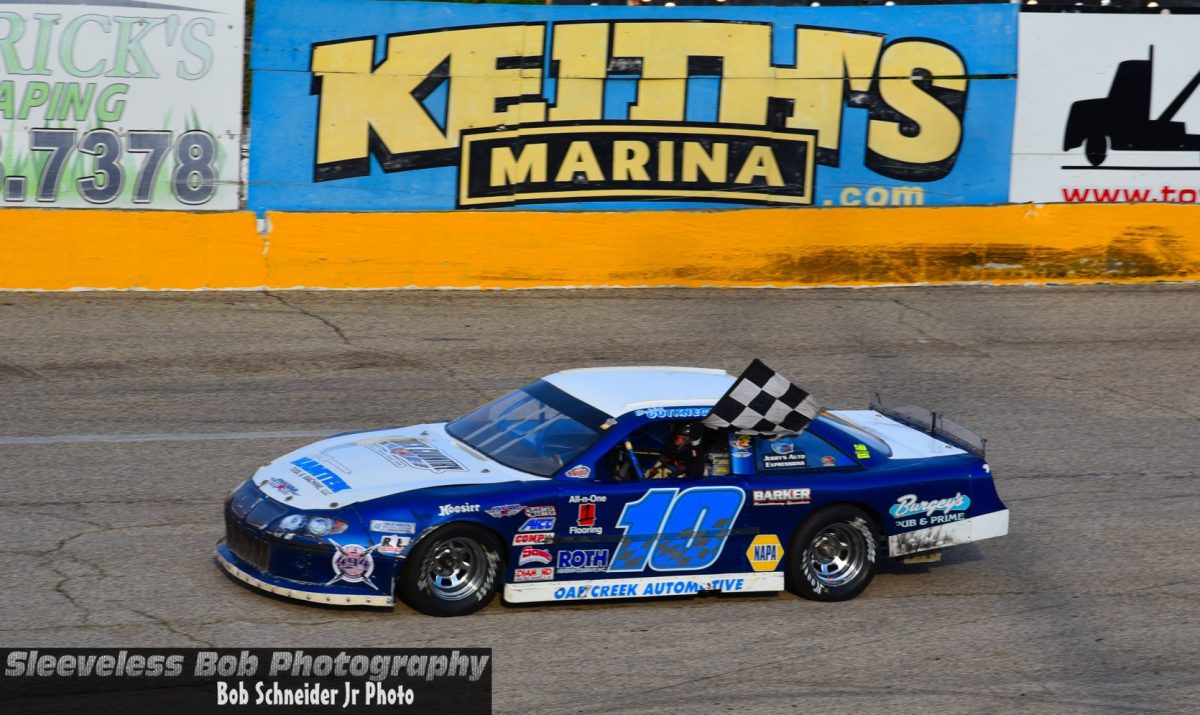 Driver of the #10 Sportsman

How did you get into racing?
When I was 16, I worked at a gas station. My boss’ brother-in-law had a car and I helped him during the week. At that time you had to be 18 to go in the pits, so I couldn’t go along to the track. Then there was another guy in Oak Creek and I helped him. One night at Wilmot I drove in the Wrencher’s race…and finished third. I was hooked! That was 1979 and by 1981 I had my own car.

So you have been racing almost 40 years – how much longer do you plan on doing it?
I’d like to do at least two more years, as long as I’m competitive. If not, I might put someone in the car a long as the division is around.

Who do you need to thank?
Sponsors: Oak Creek Automotive, Burgey’s Pub & Prime, IBEW Local 494, Hilltop Auto Wreckers, NAPA, Truck Country, KAM Tech Tool, Jerry’s Auto Body, All In One Floor, Barker Reconditioning, BT Signwriter, I Scream Ice Cream, Roth Heating
Crew: Darrek Travis (crew chief), Darren Travis, Colt Hall, Sandy Henderson, and anyone else I can steal from Ryan
Others: There are SO many people who got me to where I am…My mom (LaVerne) and dad (Harold) – they parked outside so I could use their house garage. My sister, Susie, and brother-in-law, Ken Dellman, gave me my first ride. Cordell Smeback – he gave me the chance to drive a car. Alan Kulwicki and Dennis Lampman taught me a lot. Steve Walter – he’s Ryan’s crew chief now, but was one of my main guys before I stepped away from racing for a little while.

How did you get your car number (#10)?
When you finished the season at Hales, you got the number of where you were in the standings. But then I also got a new paint job that next year which turned out perfectly. Someone said, “You got a perfect 10 there”. So 10 became my number. I traded for 10 every year but one – I had to be #6 one year because the guy who got number 10 wouldn’t give it up.

What is your favorite racing memory at Slinger?
It was after they brought us back as Midwest Sportsmen. I got caught up in a wreck in the heat race – the whole front end of the car was gone. I started the feature in the middle of the pack with no front end – just a bumper out there – and won the race. I remember Fay Hendricks came up and said, “That’s winning by a bumper!”. Tech asked, “Are you legal?” I told them I’d go get all the shit out of the trailer and put it back on!

If you could have dinner with any five people (alive or dead), who would you choose and why?
Alan Kulwicki – I’ve had dinner with him, but I’d like to have another one. Nicolas Cage – I really like his acting. My mom and dad – They are both gone. My dad only saw the first two years I raced. My mom was at almost every MidAm race right up until the end. We’d tell her we were leaving the shop at 10; she’d be there at 9:30 ready to go! Donald Trump – I’d love to pick his brain

What do you like about Slinger Super Speedway?
The track is fun to race, it’s close to home, and I’ve made lots of friends there over the years.

What is your real job?
To aggravate people. I own and run Oak Creek Automotive – for the last 31 ½ years.

You sponsor A LOT of cars. Why do you choose to do that?
Exposure. Plus, I like helping people – that’s what I like about racing, everyone helps each other out. I like sponsoring women because I think more people watch them. A lot of my sponsorships are not just money – I might fix their hauler or help in other ways.

Which Slinger driver (past or present) do you respect the most and why?
There are so many! Al Schill – watching him win all those championships without the technology we have now. Brad Mueller – he’s a good, clean racer. Jerry Eckhardt – to still be running at his age. Ryan Gutknecht [Bobby’s nephew] – we have fun racing together…we hardly ever touch.