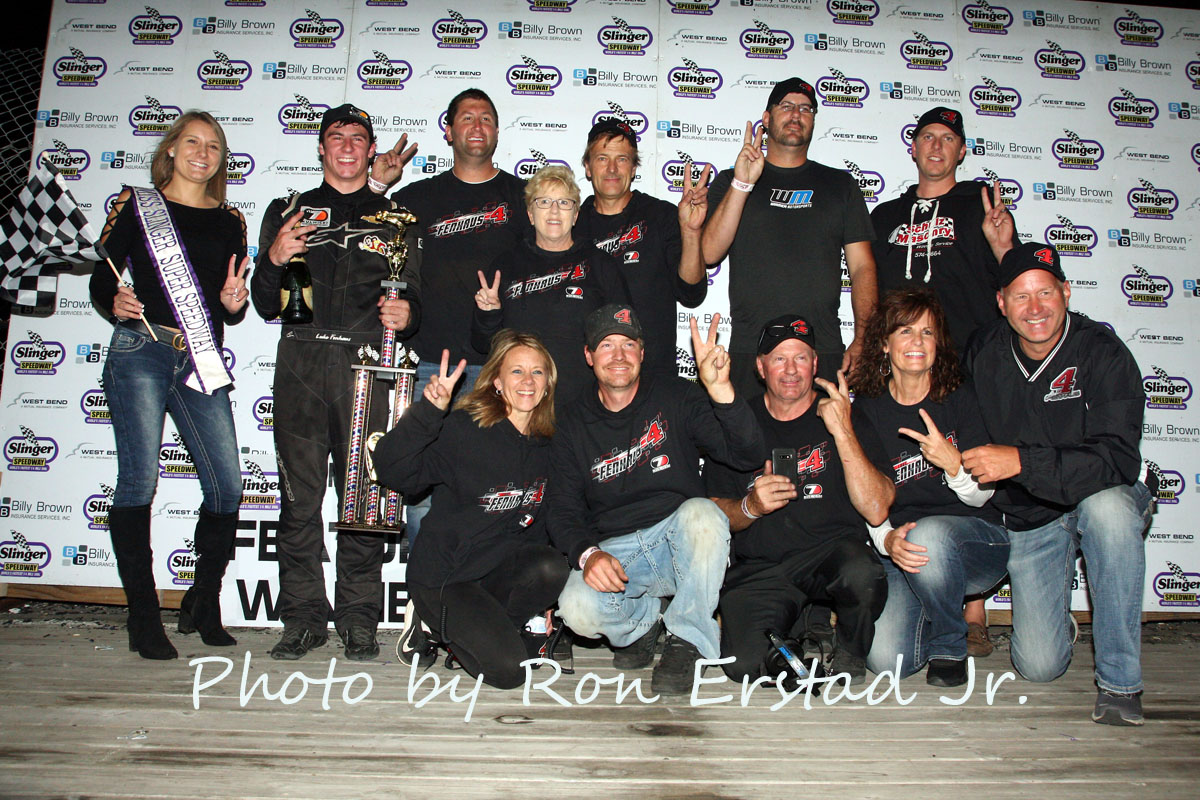 Apel, who led a race high 73 laps, appeared headed for victory with a large lead until Fenhaus was able to track him down late but his second place finish was enough to clinch his fifth Slinger Speedway super late model track championship.

“The goal at the beginning of the year was to go out and win races to be in position to win the championship and that’s what we did,” Apel stated after securing his fifth championship,” We won races and only had one finish outside the top three all year so the guys behind me did a great job. It’s an honor to win five titles now and I think Conrad (Morgan-6 championships) and Lowell (Bennett-7 championships) are in sight and it’s unreal to win five let alone one so we have to thank everyone for the support.”

“I knew he was coming,” Apel stated referring to the run Fenhaus had late in the race,” he nibbled it down and nibbled it down and I was hoping I could catch lapped traffic at just the right time with ten laps to go but I couldn’t hold him off as he was just too fast.”

Ryan DeStefano finished third a week after securing his first feature win and afterwards explained he was counting on a late caution flag that never materialized.
“The car was fast and early on I let them go as go ahead but my car was good and if a caution had come out, who knows, but I think we would have had a battle,” DeStefano said, “For what we have been able to do in the last few weeks here is pretty amazing.”

Dave McCardle continued to capitalize on an improved season as he led the opening 17 laps of the super late model feature as John DeAngelis, Alex Prunty, and Rich Loch all battled for positions behind him while Apel, Fenhaus, and DeStefano all worked their way forward from deep in the field. Apel’s car was hooked up in the outside groove and he used it to sweep past cars and gain positions before tracking down McCardle for the lead with another outside pass on lap 18. McCardle held his own in second while Loch occupied third just head of Prunty and DeStefano who found themselves in a side by side battle over fourth with DeAngelis, Brad Keith, and Fenhaus all in the mix as well. Prunty’s car kicked loose off turn two on lap 25 and he slid to the infield to draw the caution flag. Apel maintained the lead on the restart as Loch and DeStefano used the outside groove to get around McCardle while Fenhaus waited a few laps for things to settle down before he began to pick off cars and advance ahead. With Apel streaking away out front, and DeStefano holding second over Loch, Fenhaus began to methodically move up spots one car at a time until he found himself in second place just past the halfway mark. Apel enjoyed a large lead and he began to work lapped traffic as Fenhaus began to gradually erase his lead. Fenhaus drew closer and closer until he was on Apel’s bumper with 15 laps to go and the two leaders threaded lapped traffic as the laps wound down. On lap 91 the two pulled off an inside-outside split of the lapped machine of Steve Dorer with Fenhaus taking to the low groove and Apel remaining up high. The two raced side by side through turns three and four and on the frontstretch, Fenhaus was able to friction slide his rear bumper across Apel’s nose to clear him for the lead. Once out front, Fenhaus drove away a bit and raced to the victory as Apel crossed the line in second place. Ryan DeStefano finished third while Alex Prunty rebounded from his earlier incident to charge back up to a fourth place finish and John DeAngelis was fifth. R.J. Braun finished sixth followed by Brad Keith and Rich Loch in seventh and eighth place respectively. Nick Wagner and Steve Dorer rounded out the top ten.

Rich Loch won the super late model fast dash and Brad Keith was the fastest qualifier with a lap turned in 11.245 seconds.

Tom Jasinski led the first 13 laps of the late model feature before Gutknecht was able to pass by and take command on lap 14. Jack Stern, driving the #30 car normally piloted by Zach Braun, Jacob Nottestad, Zach Prunty, and Tyler Schley all spent time challenging in the lead pack before a lap 20 incident on the frontstretch heavily damaged the cars of Schley, Prunty, and Mitchell Haver. Gutknecht fended off a challenge from Berens as racing resumed and he was able to pull away while Nottestad advanced into third place. Gutknecht drove to the victory over Berens and Nottestad while Joe Shelby completed a strong race with a fourth place finish and Jack Stern was fifh.

Jerry Eckhardt and Ryan Gutknecht won the late model heat races and fast qualifier honors went to Zach Prunty after he turned in a lap in 12.123 seconds.

Bobby Gutknecht led every lap of the 35-lap sportsman feature but he had all he could handle from Dale Lecus Jr. who finished a close second. Paul Wagner finished third ahead of Brian Holtz and Jay Kalbus in fourth and fifth place respectively. Jay Kalbus was crowned the sportsman track champion for the 2020 season. Bobby Gutknecht won the sportsman heat race and Brian Holtz was the fastest qualifier with a lap turned in 12.693 seconds.

Steve Wick drove the Raceway Bar and Grill entry to the win in the Bar Cars race. Al Strobel drove a Chevy Corvette to the Spectator Eliminator race win as he outdueled a Jaguar in the finale and Rick Bruskiewicz won a wild Figure 8 race to close out the evening at 9:30 pm. 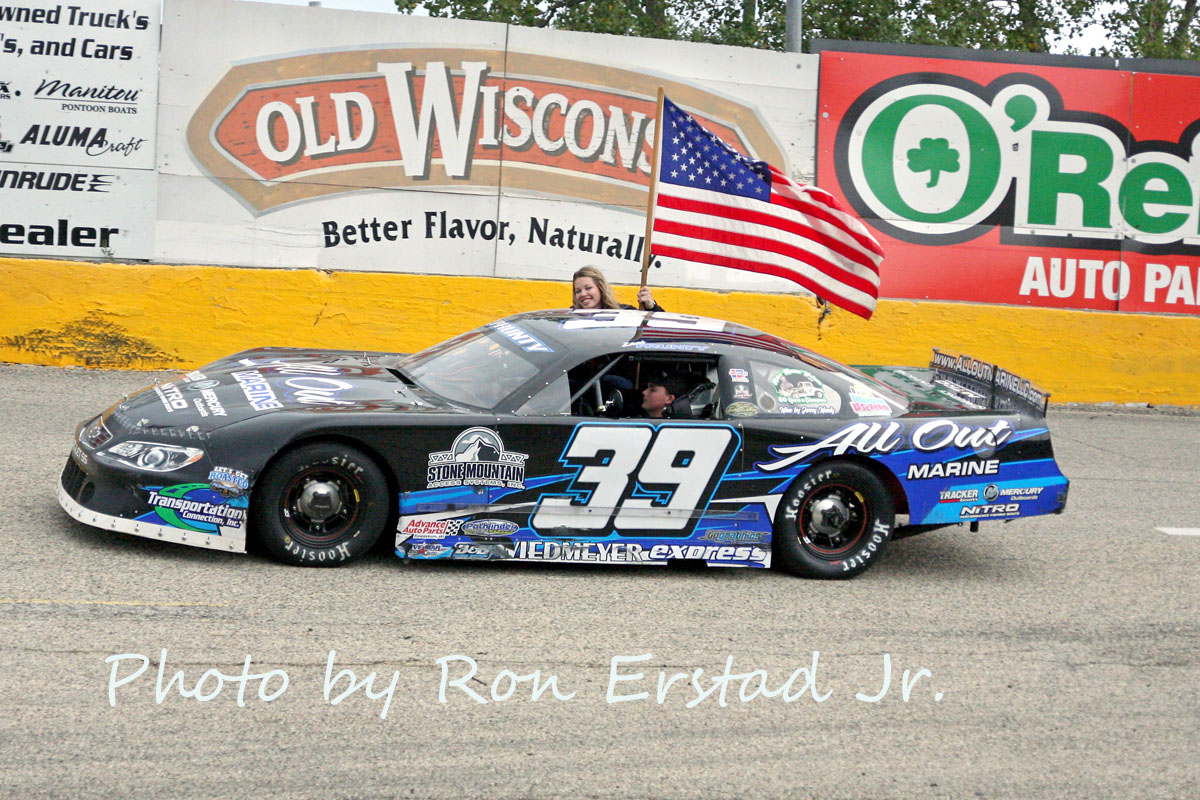 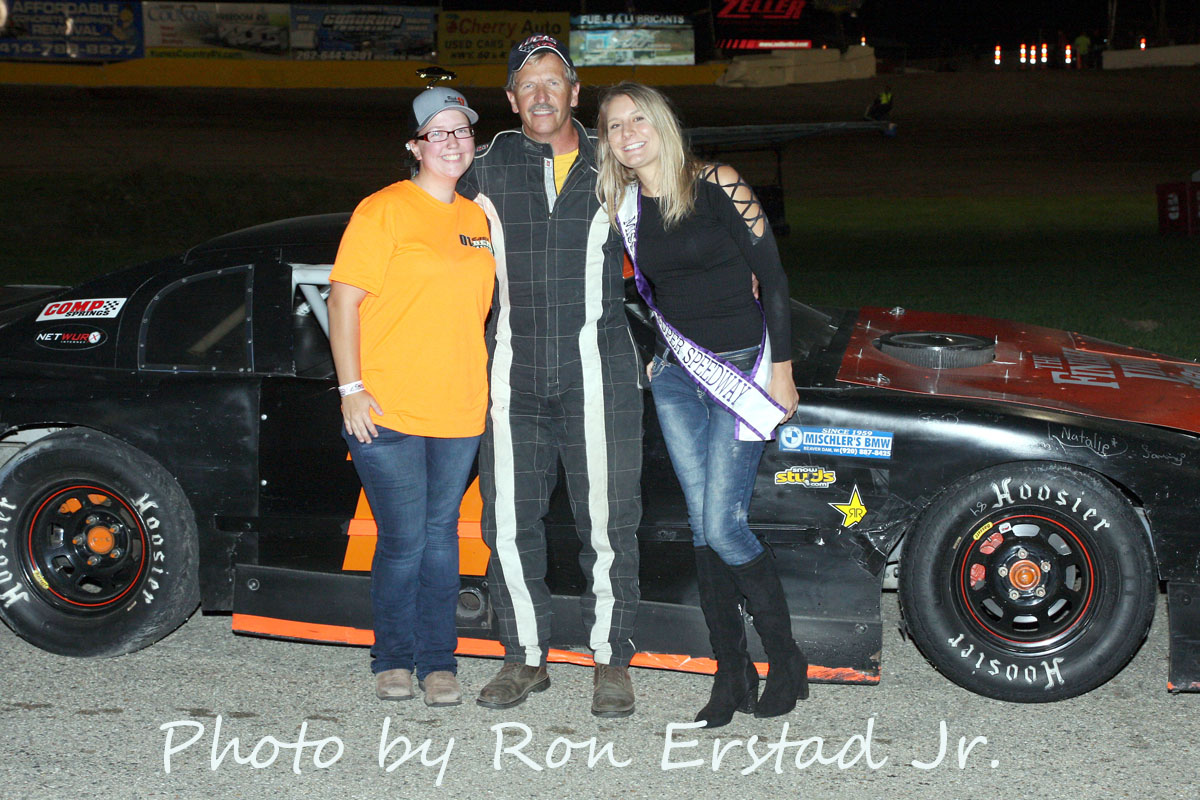 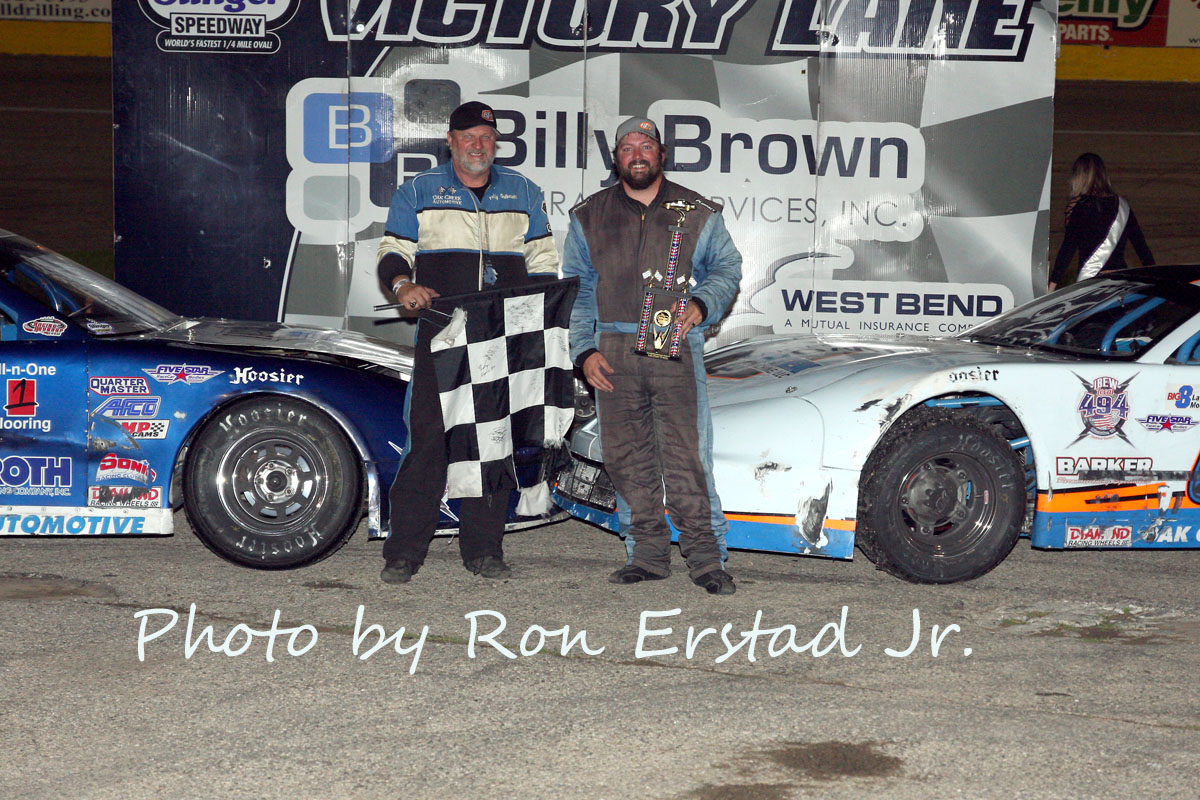 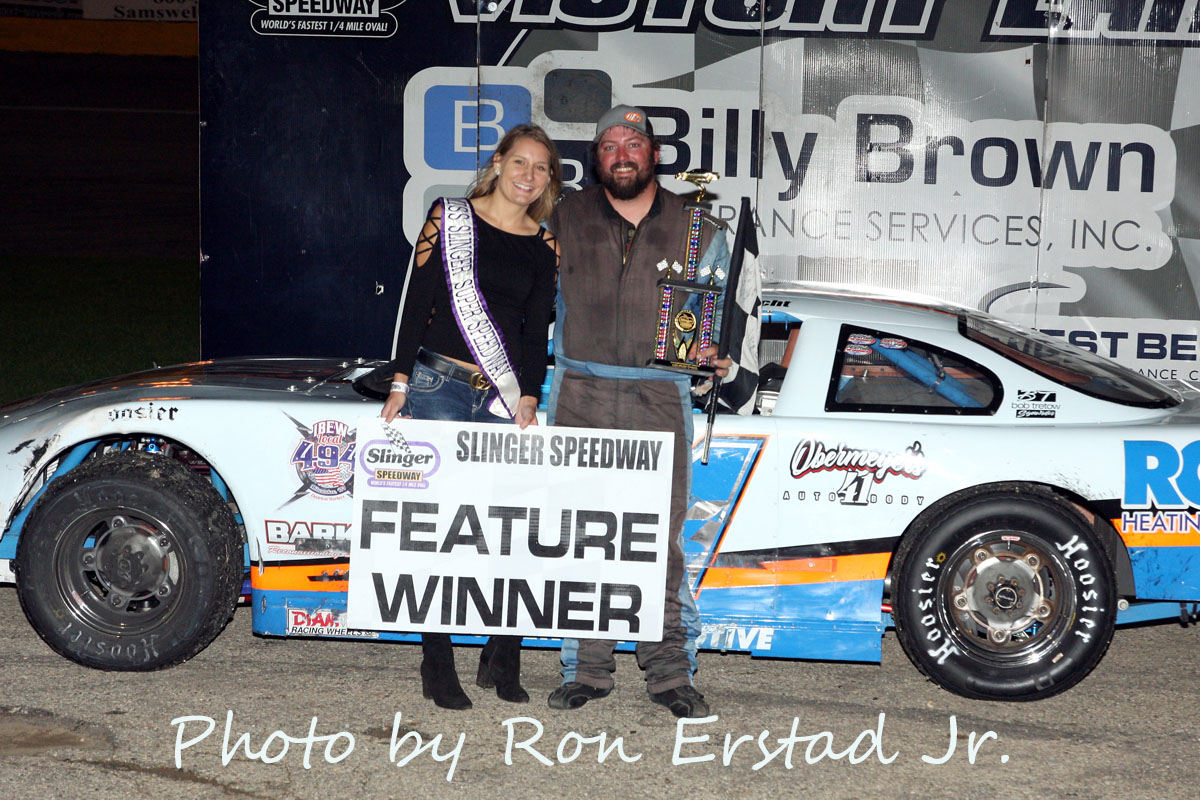 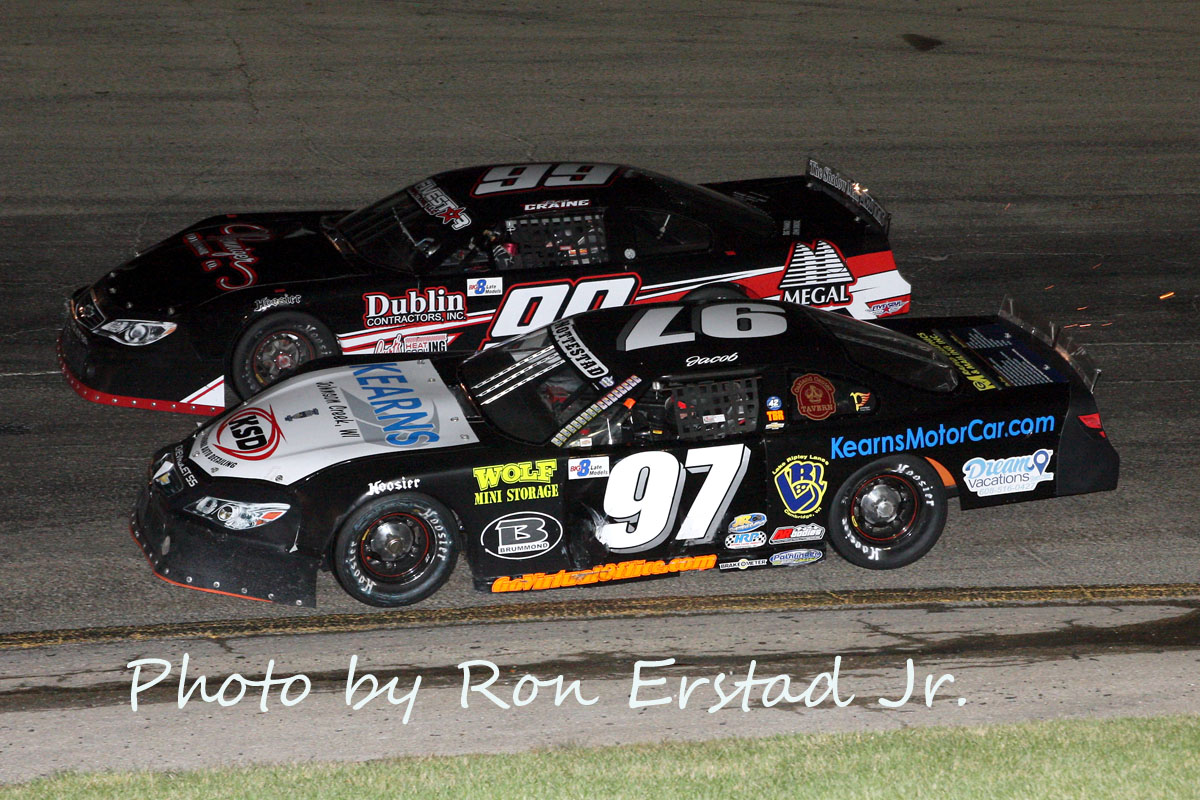 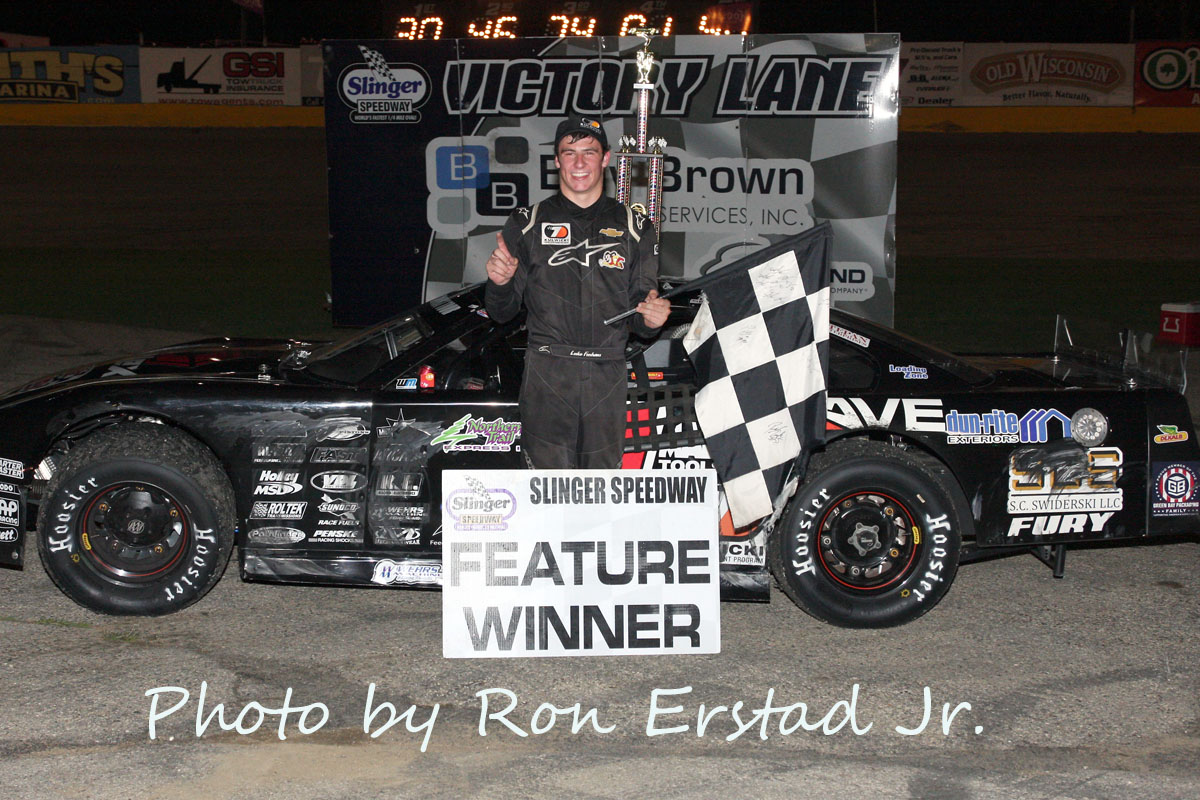 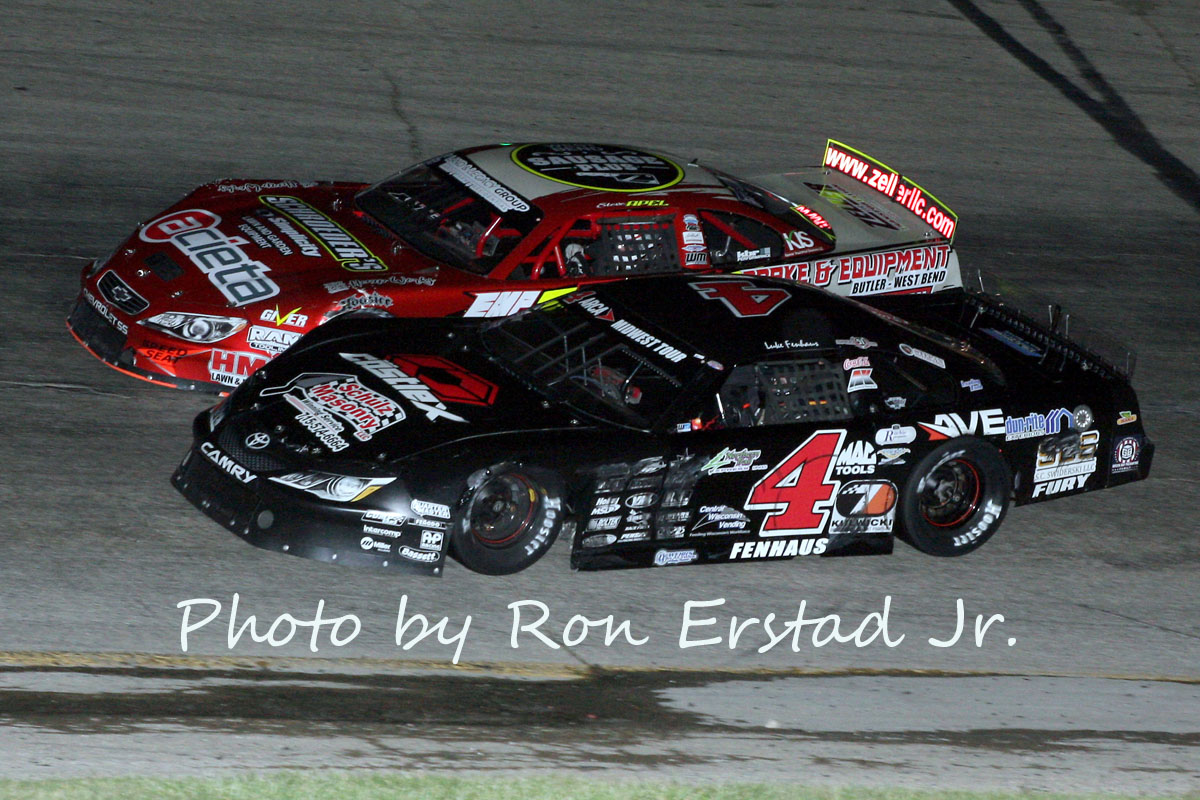 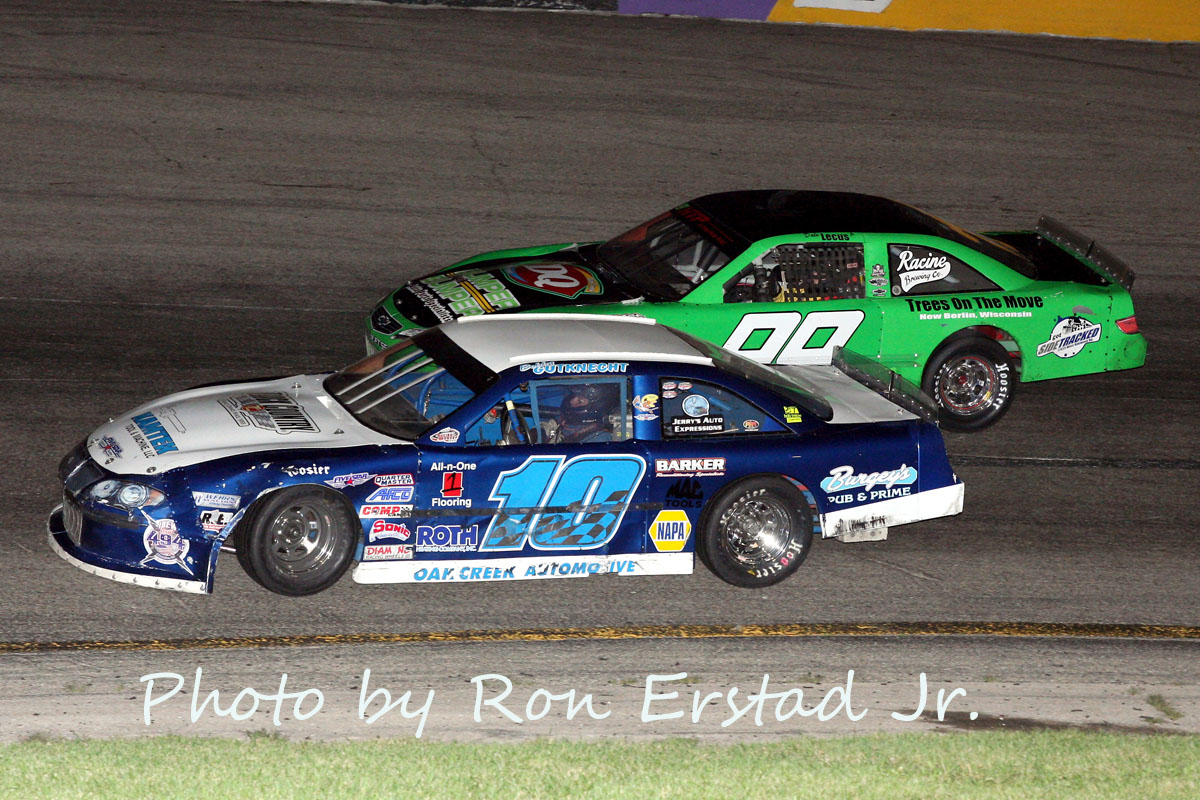 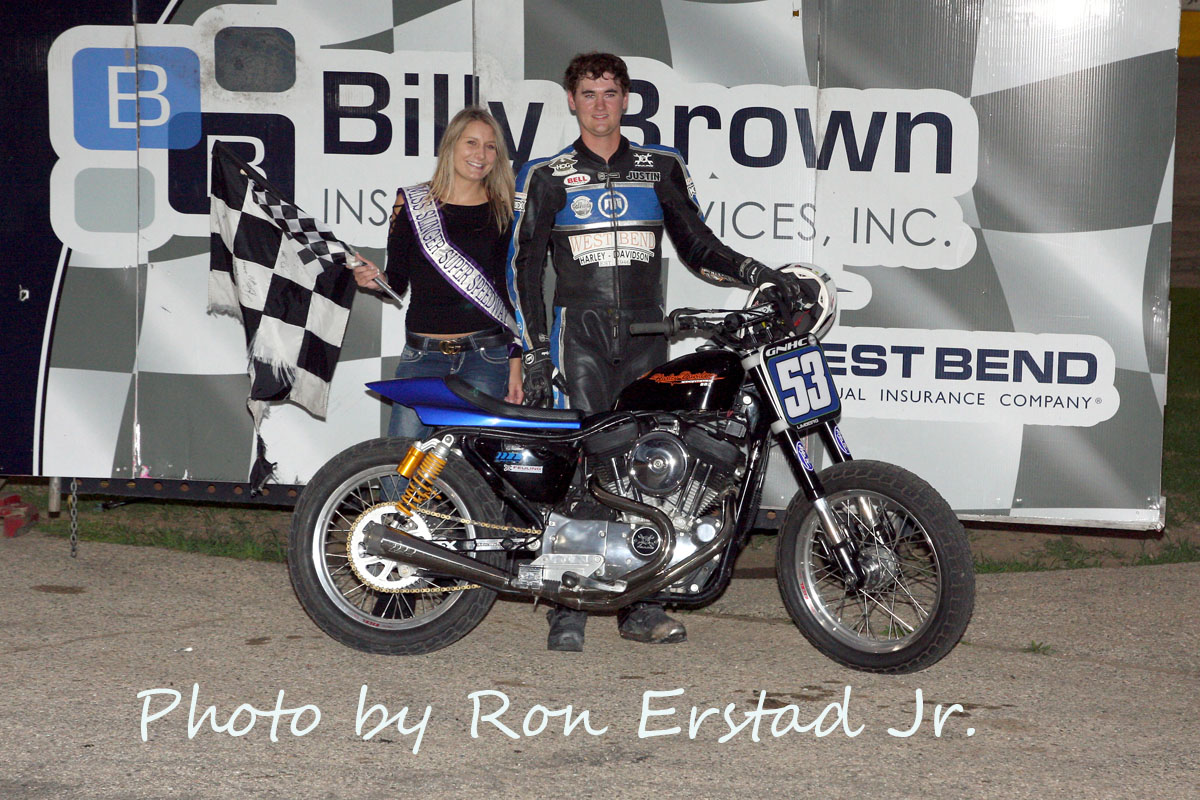 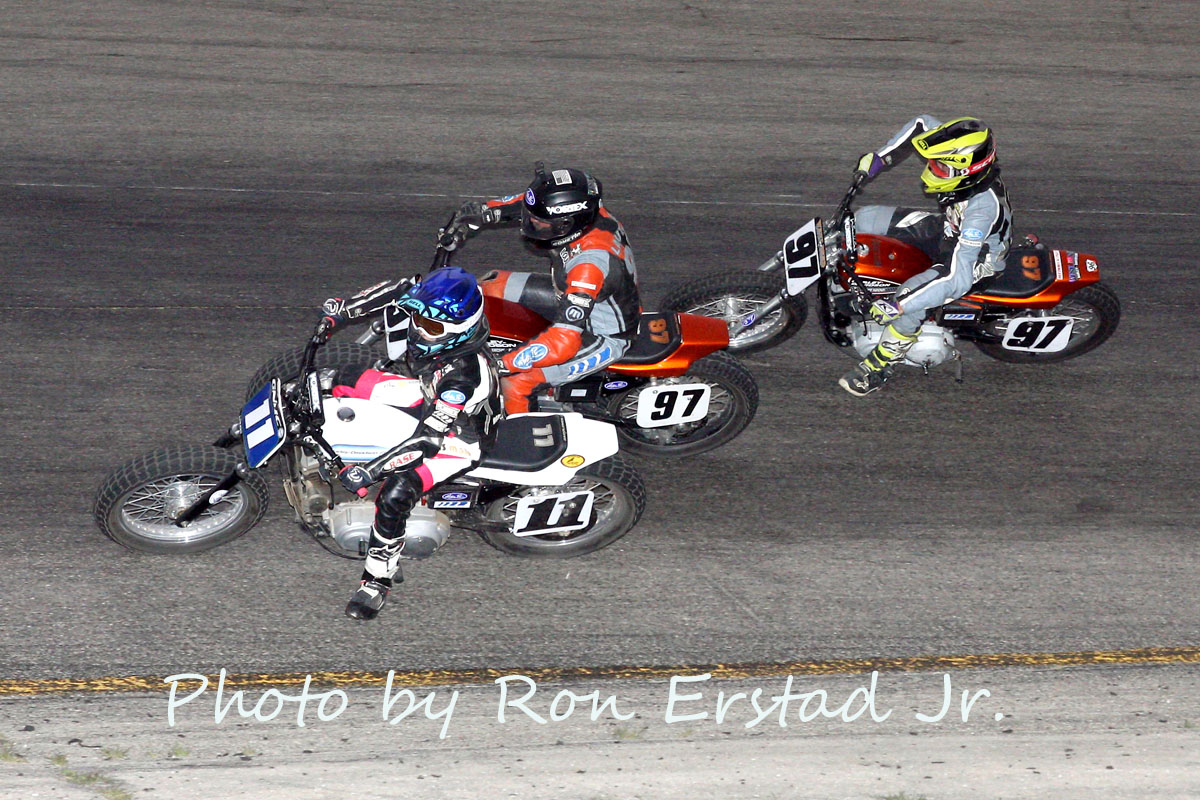 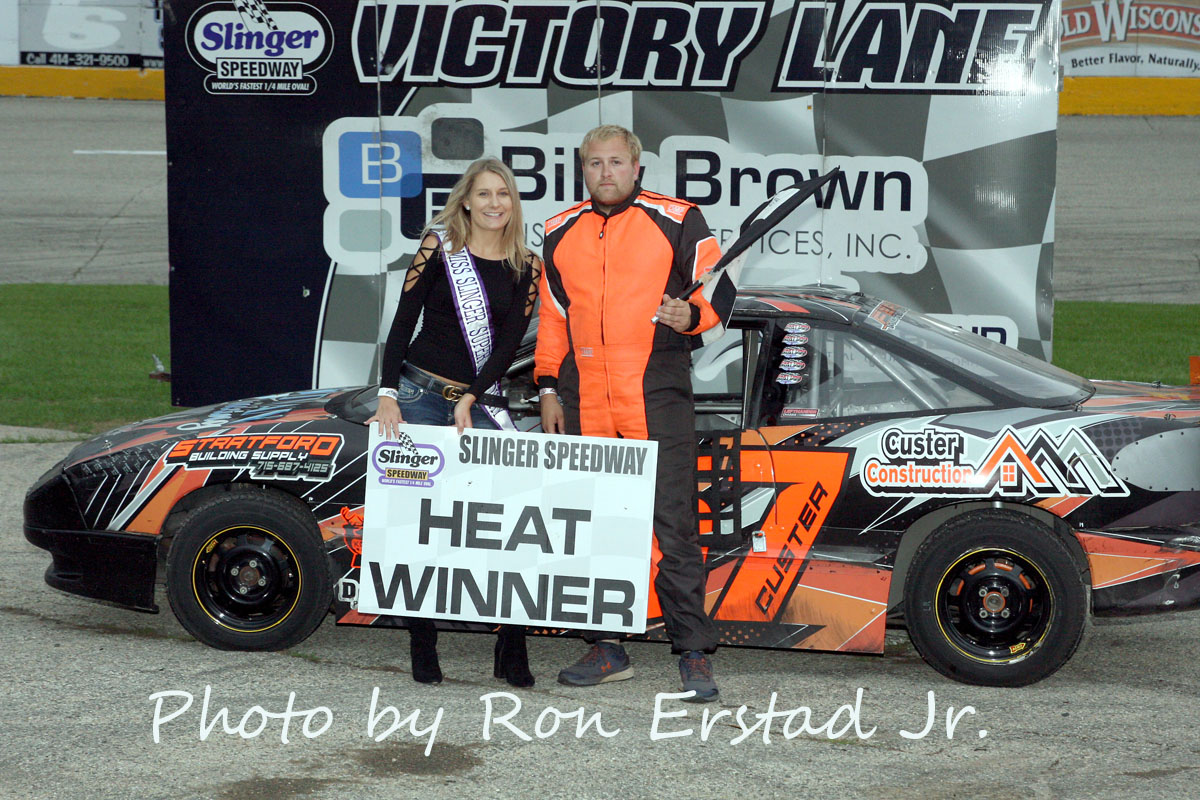 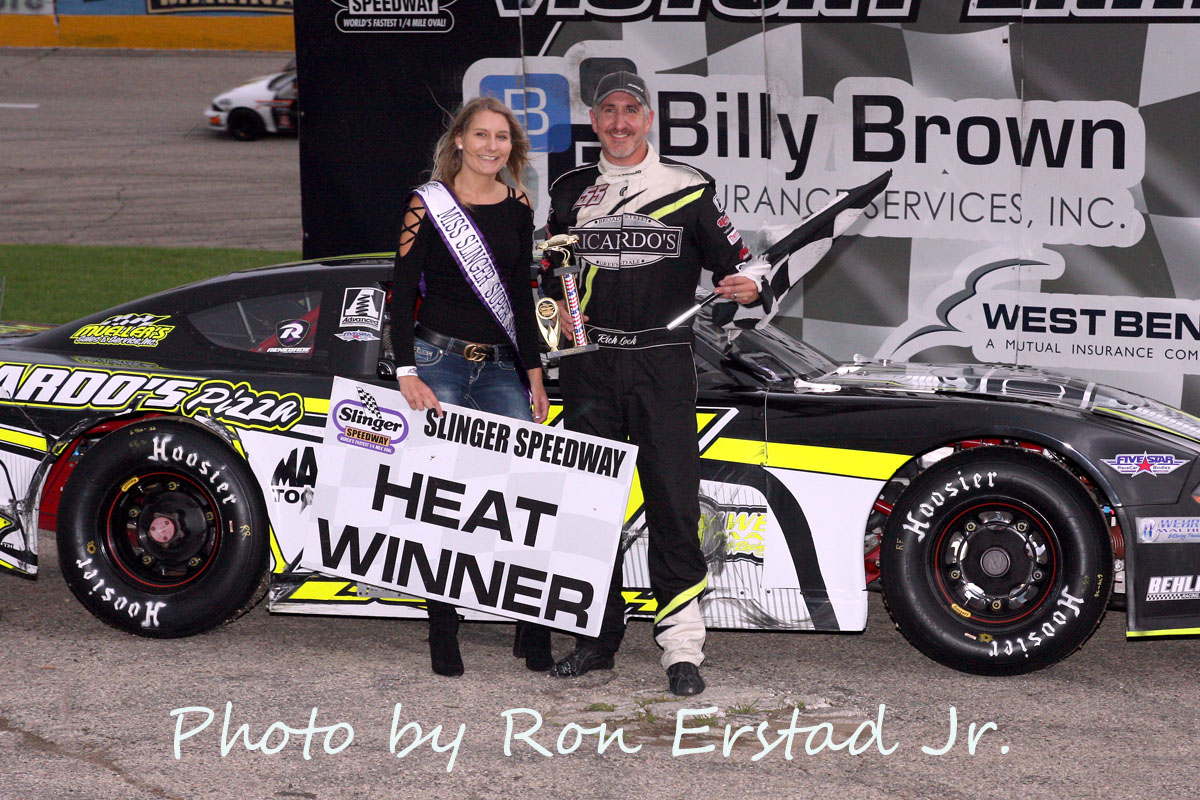 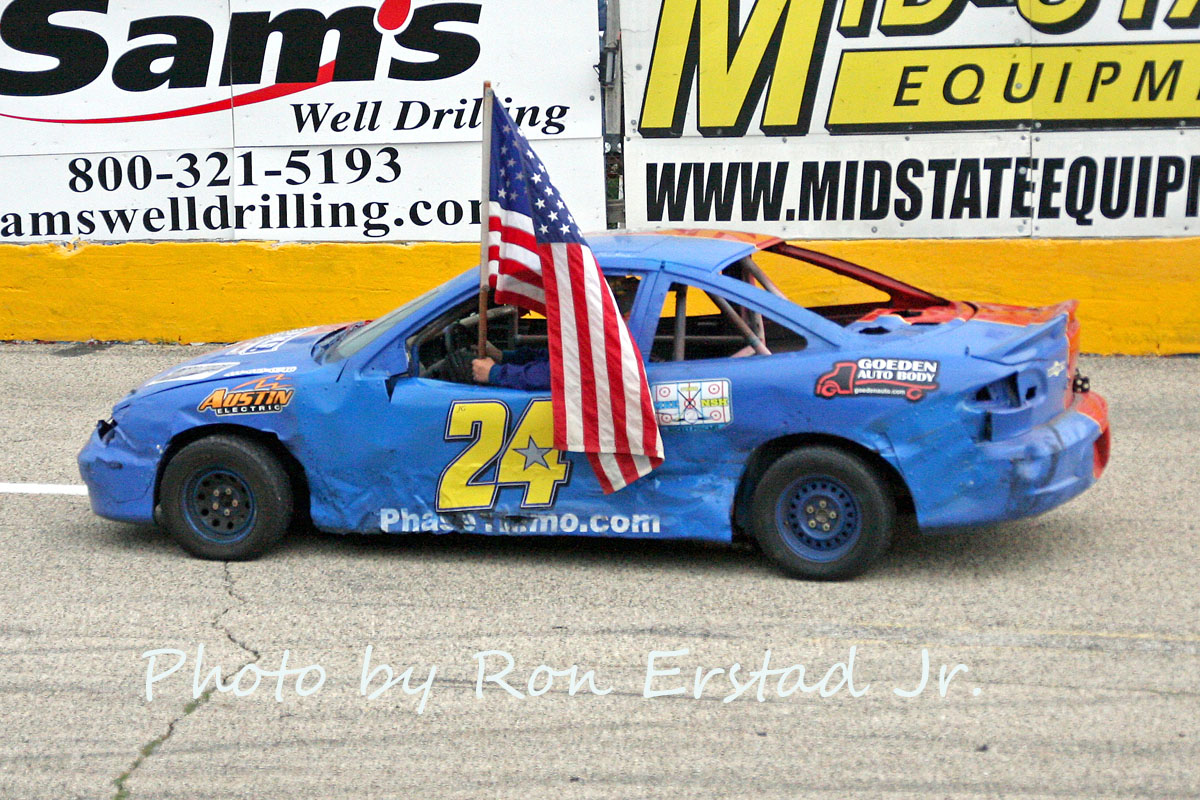