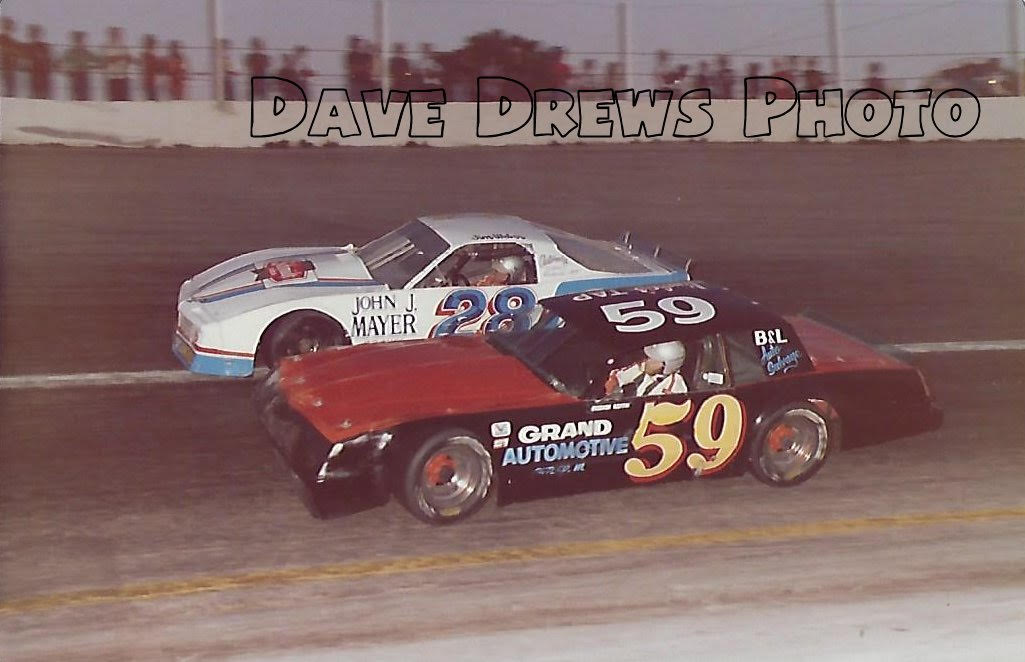 How did you get into racing?
Well, my ma and dad used to take us to Cedarburg, Hales, and Slinger. There were five of us kids in the family, so that was just something that my parents liked to do and it was cheap entertainment for us. I was hooked! As soon as I saw those modified flames coming out, I was in love. I raced Sportsman and then Late Models. I liked the late models more, naturally. The money was a little better.

What do you like about Slinger Super Speedway?
The speeds and the banking. There isn’t anything like it. I’ve raced all over the state and Slinger is just one of a kind. I love it – it is fast and fun!

Who do you need to thank from when you raced?
Fred Winn – Actually I got him involved in racing, but he was running a low-buck late model and one year he took the summer off to help me race one of my cars. I’d like to thank him because we traveled all over the state and we learned a lot. Schneider Grinding was my sponsor for many years. Tommy Olla from Headquarters Bar – he sponsored me for four or five years.

How did you get the nickname “Greasy Keith”?
It was just when I first started racing. I was 16 years old and bought a ‘58 Ford Sportsman Stock car that was at a local junkyard, and I thought, “Heck now I can go racing – just put a motor and tranny in”. I paid $50 for the car, two 3-speed transmissions, and two generators (the older guys will know what I mean by generator). So we dragged that thing home and then I went to Ixonia because my cousin had a friend out there that had a ‘63 T-bird with a blown transmission. So I bought that car for $10, and towed it with a chain from Ixonia to Milwaukee. I got the $10 motor out, went to another junkyard and bought a transmission and clutch for $30. I didn’t know anything about the stuff; I had just watched the races from the stands. Anyway, it broke all the time, naturally. Fred Winn was working with me at a gas station, RPM Sunoco, in Milwaukee at the time. Naturally, I was always greasy. I don’t know if Fred started calling me “Greasy” or some of the others guys. I’ve been called a lot worse, though.

What is your favorite racing memory at Slinger?
I won the semi-feature at the first Nationals, and got a nice trophy.

How did you get your car number (#59)?
I had a lot of car numbers over the years. The last one, 59, my crew chief’s daughter said, “Fifty-nine just looks like a cool number”. And it does. So that was my last number and we stuck with that for a number of years.

There’s a legend surrounding you about a boot…care to share?
Sure…this is my 15 minutes of fame here. I think it was back in like ‘79 or something like that. I finished 3rd in the Hobby Stock point standings. We were at the awards banquet at Slinger and everyone was drinking beer in pitchers. Well, they ran out of pitchers and I wanted to drink a wapatui mix I had brought. So, off went the boot! (If anyone wants to know, it was 4 shots of gin, 4 shots of rum, 4 shots of sloe gin, OJ and ice.) But then I kept doing this over the years. I don’t know what year it was, but Alan Kulwicki, Matt Kenseth, and Mark Martin were all at the banquet and all three drank out of my boot. Kenseth and Martin have both mentioned my name in interviews. I think it was on Dave Despain, Kenseth said, “There was even a guy up there named Greasy Keith…”. Mark Martin, on one of his podcasts talking about racing in Wisconsin said, “There was this greasy guy – he paid me $100 and I set up his car”. Which I did, but I paid him $400, not $100! It went the fastest I ever did, but of course the motor blew up. Martin, he left dirtier than I did back then, and he bought the beer! [Follow-up question: When’s the last time you drank out of your boot?] Ohhh, about 20 years ago. People nowadays just don’t see the…ya know. All of us back then, we raced hard and partied harder.

If you could have dinner with any three people (alive or passed), who would they be?
My mom (Myrtle), dad (Alden) and oldest brother (John). My oldest brother helped me out financially with the racecar with whatever he could. My mom and dad because my mom made spaghetti and meatballs once a week and that was my favorite! Without them, I couldn’t have raced. I took over their garage when I was 16 and after that they had to park outside.

What was your first car, and what happened to it?
A ‘57 Chevy, flat black. I cut it up to make a stock car out of it. I experimented on it with doing body work and everything else, then I got the bug of racing and said, “Let’s rip this up and see what we can do with it!”.

Which Slinger driver (past or present) do you respect the most?
Conrad Morgan because I raced against him at a couple different tracks and I could talk to the guy and ask him questions. One time he lost it in practice and ran into the side of my car at Slinger. He messed it up pretty good and he actually came over to apologize and ask if I needed anything. I respect that.