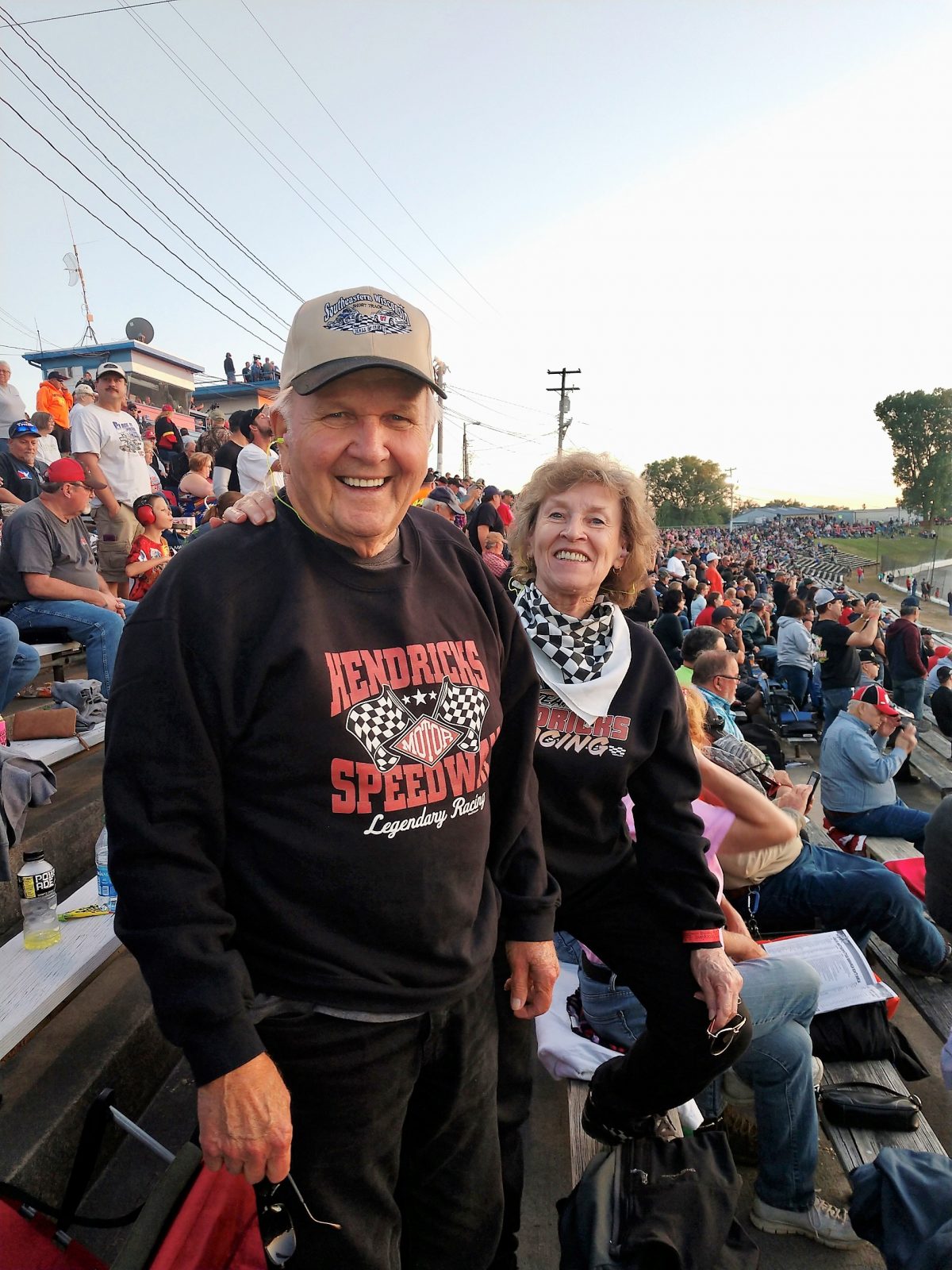 How did you get into racing?
Jim: I just had some friends of mine that raced and they weren’t doing that good. I thought I could do a little better, plus I had stuff in my garage to build my own racecar. So I started building my own racecar in my garage. Not long after, all my friends that were into racing quit.

How did you get started writing race reports?
Fay: I had no clue racing even existed until Jim started. That was two weeks after I had my fifth baby, so I didn’t actually get to see a race until 6 weeks later, which was mid-July. Once I saw it, I really liked it. I kept talking him into one more year, and then another, and then another…that went on for 14 more years. As far as writing, I never wanted to be a writer; I used to hate writing in school. It was because Al Fortner and his wife Jean sold Checkered Flag Racing News at the tracks, and Al was also a photographer for CFRN. They became friends of ours and they had an after holiday party they invited us to. That’s where I met John Quinn, and he wanted me to write the real lowdown on what happened at Hales and Slinger because he didn’t trust the official race story. I turned him down because I had five kids in school, I was working at school, and I was sleep deprived. A year later, he asked again. By then the federal funding for my job had gone away and I decided not to bump other ladies (I had seniority). I decided to give writing a try.

Fay, Todd Behling calls you the “track historian”…
Fay:That’s because I’ve been there so long! I tell people now that I came with the track. We started in 1969 when it was still a dirt track, and we’ve been there ever since.

Jim, you have championships in Sportsman and Mini Stock. Which was your favorite to drive?
Jim: Sportsman. I always raced Sportsman at different tracks. I just drove the Mini Stock because Doug Bandl asked me to – he was having heart trouble.
Fay: Doug Bandl had suffered a heart attack and had to sit out a season, and chose Jim because he had just sold his car and “retired”.
Jim: I drove it at Lake Geneva and Slinger that one year, and was champion at both tracks. [Which one was more difficult to drive?] Jim: The Sportsman because I drove it both on dirt and asphalt. I only drove the Mini Stock on asphalt. It was pretty easy to drive really. Bandl had the car setup; I just got in and drove.
Fay: They did all the work, and I even drove him to track so he could rest!

What do you like about Slinger Super Speedway?
Fay: That’s home! It’s 15 miles from the house. We used to have three or four tracks within half an hour of our house. We lived in the perfect place!
Jim: I just like it because it’s on a Sunday. We’ve been going every Sunday, even when it was dirt. Now that’s asphalt, it’s a little cleaner. It’s enjoyable racing. I liked it when I was racing because I was able to do really good at it – and then you like it when you are good at it.

Fay: When people remark about where they were when man first walked on the moon…I was at Slinger – it was a race night. We all kept looking at the moon thinking maybe we’d see a glint of metal or something.
Jim: I started racing at 31; now you see all these kids starting to race at 12 or 13. If you are 31, you are over the hill already. When I first started, you had to be 21 to race and 18 to get in the pits.

Who do you need to thank from when you raced?
Jim: I had a few good crew members that stuck with me for years. Some have passed on already. I had Kenny Heckendorf – he was really good, helped me build the cars and was there almost every night. Doug Steffen. Al Klockow. Fred Liebl. I didn’t have a big crew; I always had one or two guys, three at the most. Sponsors: Kowlaski Trophies, some taverns…First Edition and Pizza Saloon in Jackson, Schmid Brothers Builders, and Kowalski Brothers Builders (for jackets). I had a couple body shops who painted my car – Jim Dragich Auto Body and Meer Auto Body. I didn’t have a ton of money coming in.
Fay: He didn’t want to beg for money and he wouldn’t let me do it! I can tell you how we got our crew guys! Doug Steffen was a racer and wasn’t doing very good, so he got rid of his stuff and helped Jim. Ken “Heckie” Heckendorf was a race fan and a Ford fan as well. One night he came up to Jim after the races and said, “I can hear there is something different with your engine…and I can fix it.” He took a look at it, tweaked it a bit and was with us ever since. Fred was one of the scorers at Hales and always liked to watch Jim race. When he was done with that job, he helped us. His wife too; actually she did more of the work than he did.

What is your favorite memory at Slinger?
Fay: The first championship – the first one is always the sweetest. Of course we race people have coolers all the time, and everyone opens their coolers after the races. At the end of the season if you are champion (or at least in contention) you bring a ton of beer and munchies and celebrate long after the races are done. That’s the way we did it at all the tracks.
Jim: Winning the two track championships in Sportsman, two years in a row. I beat some pretty good guys. I had a couple of years of practice before ‘79 to try to beat those guys. Finally, I started to be able to do that – that was the fun part.

How did you get your car number?
Fay: He bought one that came with a trailer and ran that number, 261, the first year. It was not a good car, so he sold it for about what he paid and kept the trailer. Then he built his first car. He only built three of them and just one survived. Another Ford racer, Dick Stalter and his son Ryan, have plans to restore it.
Jim: When I was racing, you took your car number by how you finished in points. The first year I raced the car I built I picked #89 and I finished 28th. So my next year was 28. The next year was 14. The year after that, 7th. The year after that was 3rd.
Fay: Tied for third. So he was 3 ½. Technically they didn’t allow fractions, so they didn’t like that. But he had cut his number in half year after year, so I thought that was only fitting. They realized that people kind of liked it, so they let him keep it.
[Jim, why did you pick 89 for the first year?] I just picked that because nobody had it. There were 110 Sportsman a week when we started and you couldn’t pick a number somebody else had.
Fay: The top 50 numbers were earned. You needed to get permission to get a number if the driver was not coming back. The top Modified drivers became very superstitious because they were targets, so instead the champion would run 99, number two would be 98. They did that for several years.

What was your first car?
Jim: A ‘47 Ford, maroon, it went to hell after about 6 months, the engine went bad. Then I bought a ‘48 Ford. Then I switched to a ‘51 Oldsmobile. That car I really liked because it was a lot faster than that Ford
Fay: I didn’t have one. I didn’t start driving until after I had three babies.
Jim: Then she had a ‘60 Pontiac Bonneville.
Fay: That was actually the only car we had for the first few years of our marriage.

Which Slinger driver (past or present) do you respect the most?
Fay: Miles “The Mouse” Melius – if you never seen the sight, it was something to behold. He drove faster than anyone, with the left front wheel high in the air. I don’t know how he even saw where he was going, but we just lived for that.
Jim: In the old modifieds, I used to like Kenny Tlougan. I just liked the way he drove. When you start getting into Late Models at Slinger, I’m going to say Tony Strupp. When he got into the late models, he was really good. I drove a late model a couple of times, but I never had the money to build one. I would say he was one guy we liked to watch drive.
Fay: People used to say Tony drove the track like he was on a string. 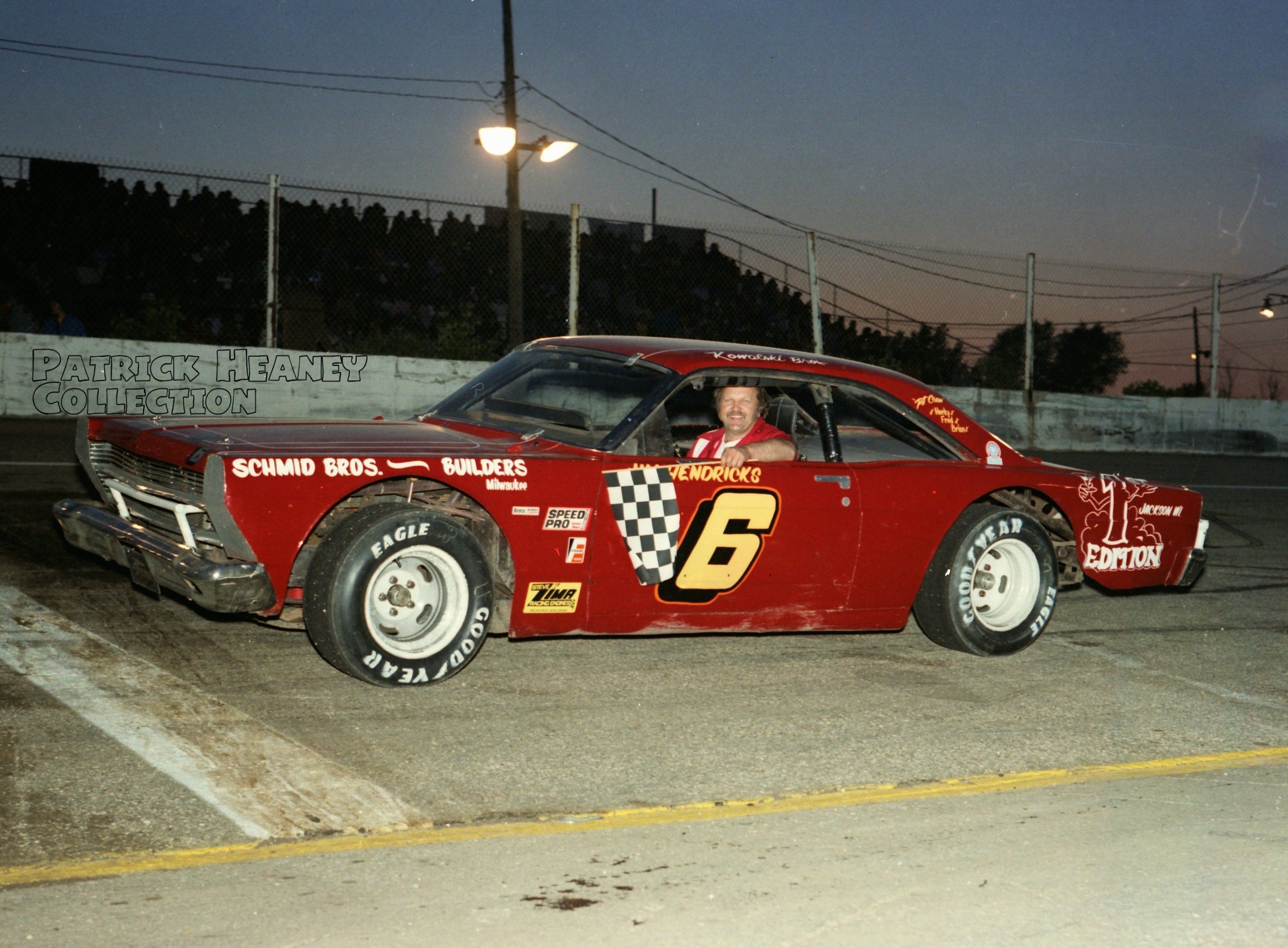