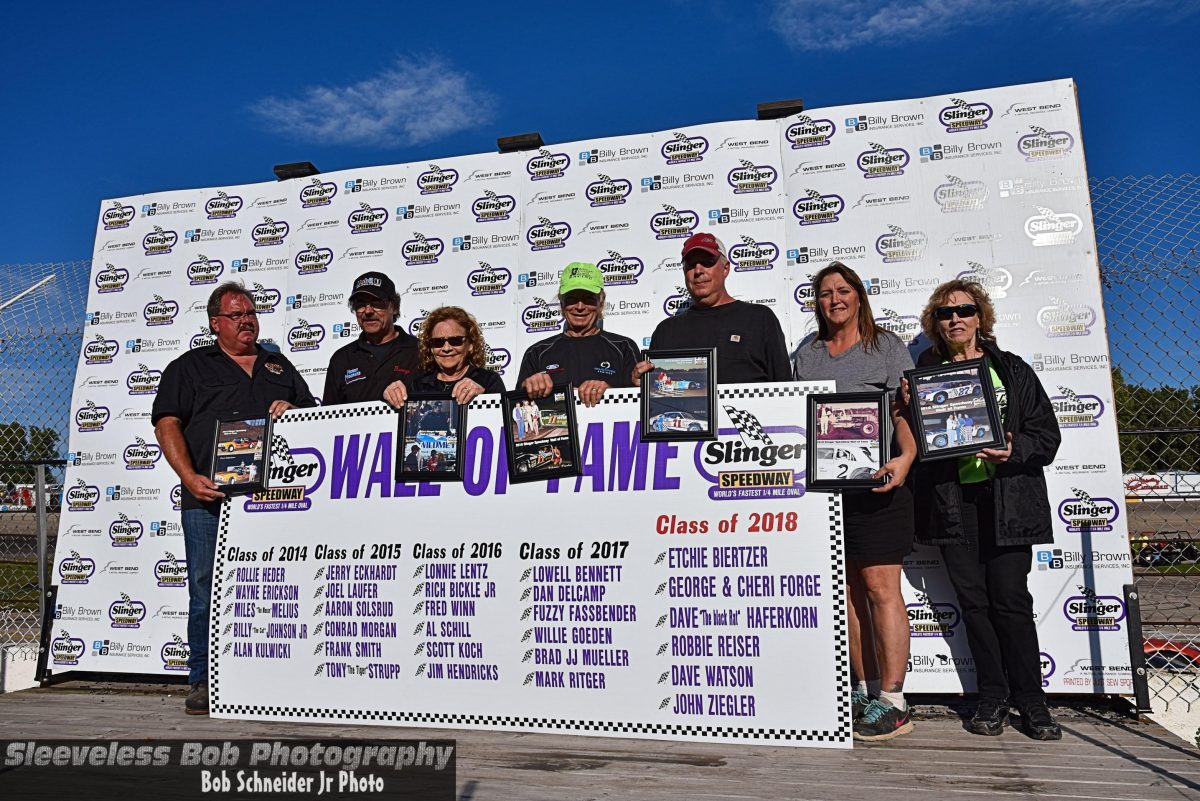 How did you get into racing?
George: Herbie Zabel and I started in 1967 and thought, “This is gonna be cool!”. In 1968, we had a stock car in the Amateur division; there were only three of us old enough to drive [George was 15]. Dennis Hecker did the driving and was the co-champion that year. Things transpired from there. In 1969, Dennis went in the Army and I drove. I ran a Sportsman from 1970 until Slinger got paved, then did drag racing for 11 years. [George was also in the Army National Guard from 1972-1978.] Herbie: You forgot to tell them that you drove on the only circle track in the Town of Erin, Mink Yard. If it had a motor, it got raced there. [Mink Yard was George’s parents’ house, and was also the site of the first Motor Masters shop.]

How did MotorMasters come to exist?
In 1968, all of the guys hung out at our old shop on Hwy K; it was the focal point for all of us. I’d put Motor Masters on the quarter panel of the racecar. It started as a partnership business in 1971, incorporated it in 1977.
Cheri: I was working at International Stamping and George was at John Deere, both working second shift. Our daughter was starting full-time school and I didn’t want to pay a babysitter at night and not see her all day.
George: I decided to quit working on cars and build engines because we had been farming that stuff out before. So we bought a cylinder hone, a rod hone, and a boring bar.
Cheri: We started machine work in ‘85 and I was able to be home at night with the kids. The first salesman who came in asked who would be running the machines. He laughed when he found out it was me and George kicked him out. We spent $200,000 with the next salesman that came in!
[Follow-up question: Which do you like better, driving or building motors?] George: Building motors. I’m better at that than driving. At least I think I am.

Where did the name Motor Masters come from?
George: Well, it was interesting, my dad said motors derive power from another source. But there was a place in Texas called “Engine Masters”. We get some calls from people wanting us to work on their electric motors…

What do you like about Slinger Super Speedway?
George: It’s super fast and a unique race track. We’ve gone from the east coast to the west coast and everyone knows about Slinger Speedway.
Cheri: It’s more exciting to watch the races there. There isn’t any other place you can go that racing is that close and things happen that fast. The level of competition in the last 15 years is awesome.

If you could have dinner with anyone (alive or passed), who would you choose?
George: Smokey Yunick – I respected his opinion and he was innovative; John Force – he started from nothing; Roger Penske – same reason
Cheri: Shirley Muldowney – I was into drag racing when she was running. She was shunned for being a woman and I still fight that to this day in this business.

What was your first car?
George: A 1956 Ford Crown Victoria. It had no engine; I paid five bucks for it. I was 11 years old. [What happened to it?] It went back to the junkyard because it had no title. When I was 12, my mom bought me a ‘56 Mercury. It didn’t run, but within 10 days it did and I raised all kinds of hell with it. When I was 15, Herbie and I would push it out of the driveway and take it to the drag strip…between Shamrock Lane and the Erin Inn we had it marked off by the foot. When I was younger, I rode my bike up at night and watched from the cornfield while the older boys raced.
Cheri: An Opal Manta – I drove whatever my brother-in-law had (he worked for a car dealer).

You are at Slinger Speedway every Sunday night. Walk us through what your night is like at the track.
George: When we get there, we go see our customers first…see if they need something and help them if they do. Then we see the ones who used to be our customers, but are still our friends. We make the rounds a bunch of times. We take a lot a lot a lot a lot of parts along; that big ass Impala has no room left in the trunk or back seat.
Cheri: You can’t even get a can of gas in there!
George: Anyone we can help, we do. There are lots of races not seen because we are helping someone or we have the luxury of being in tech. And I do mean that as being a luxury.

Do you remember your first championship as an engine builder?
That would have been with Chico Cina. It was cool. The first one with the Super Late Models was with Steve Apel in 2013, with Limited Late Models it was Wayne Freimund in 2011, Sportsman was Kyle Chwala in 2013, and Slinger Stingers was Paul Wagner in 1998.

Is there anything else I should have asked you about, any other stories you want to tell?
Cheri: Like stories from Willie and Kathy’s til the sun came out? Those were the days!
[Editor’s note: I was entertained by several stories at this point, but am going to leave it to the reader to hear those straight from George and Cheri, maybe while enjoying a “stump lifter” if you are lucky. Here is one that George shared, though…] George: We didn’t put the race tires on the car when we towed it to the track because we didn’t want them to blow. We were such great chassis specialists back then and put water in the tires for traction. When you are 15 years old, do you know how heavy a tire full of water can be?! I remember one time we were rolling the tires around to change them, and Jim Hendricks asked if he could help. No, no, no! 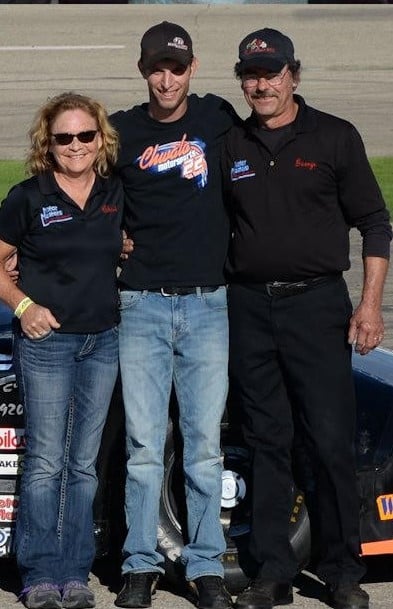