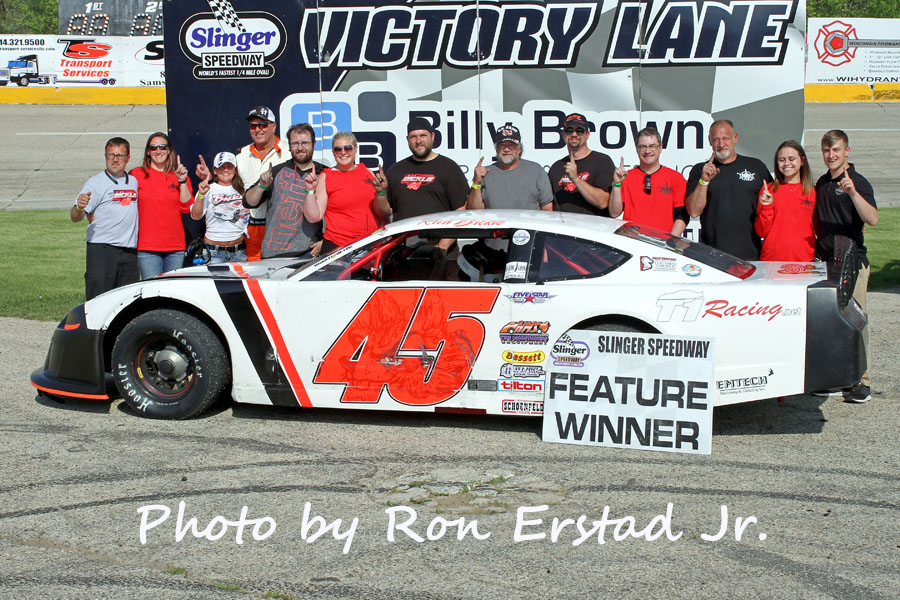 Slinger, Wis., May 16—Rich Bickle continued his strong start to his 45th and final season of racing by capturing the victory in the first 50-lap super late model feature Sunday afternoon at the Slinger Super Speedway and then finishing fourth in the nightcap to win the overall title in the Miller Lite regular season opener.

“I won the week before I was 60 and now I won the week after.” Bickle told the crowd from victory lane, “I’ll take it and I’m just glad 2020 is over for everybody because last year was a disaster for me. After that we had to come back and keep running and you never know we may run here all year.”

An added caveat to Bickle’s follow-up win to the race honoring Joe Shear, was Sunday’s checkered flag at Slinger occurred on the eight year anniversary of the passing of renowned driver Dick Trickle and Bickle cut his teeth racing weekly against both legendary short track stars.

“That day was kind of a crazy day for me with how close me and Dick (Trickle) were,” Bickle stated with emotion in his words,” This is for him…and here we are again.”

Dennis Prunty followed up his fifth place result in the first 50-lap super late model feature with a strong win in the second event.

“The track gets greased up when the sun is shining like this and Rich left a lot of rubber on the outside lane so when I got up there I couldn’t go,” Prunty said afterwards, “But we just added a shim to the right front and went for it.”

Bickle and Rich Loch paced the field to the green flag in the first 50-lap feature and the pair battled fiercely for the lead in the opening laps before Bickle was able to ease ahead and take command. Bickle then had to turn back challenges from Dennis Prunty as Luke Fenhaus and Steve Apel advanced to challenge the front runners. Fenhaus and Apel both were able to make their way around Prunty as Bickle continued to lead and a late race caution flag tightened the field with seven laps to go. Bickle was once again able to thwart the challenges of Apel as racing resumed with Fenhaus swooping to the inside to grab second from Apel as the defending track champion moved back into line in third. As the leaders exited turn four on lap 48, an excuse me nudge from Apel sent Fenhaus a bit wide opening the door for Apel to challenge for second as the white flag was displayed. The two rubbed doors at the start-finish line and as Apel tried to complete the pass and clear Fenhaus in turn one slight contact sent Apel looping around off turn two ending the race with the yellow and checkered flags waving. Bickle was declared the winner and track rules concerning last lap incidents with contact dictate the spun driver maintains the spot thus Apel was credited with a second place finish. R.J. Braun finished in third while Alex Prunty and Dennis Prunty rounded out the top five in fourth and fifth respectively. Ryan DeStefano finished sixth followed by Brad Keith in seventh and Rich Loch in eighth. Mark Eswein finished ninth and Nathan Matz was tenth.

An invert to start the second 50-lap event had Mark Eswein and Rich Loch contesting the lead early on while top finishers from the first feature found themselves deeper in the field. Dennis Prunty was the first of those to break through to the front and he grabbed the lead while Alex Prunty, Rich Bickle, and Steve Apel also worked their way forward. Alex Prunty moved into second place and tried to chase down Dennis Prunty for the lead while Ryan DeStefano advanced to third. Bickle and Apel also threaded their way forward with Bickle moving into the fourth spot late in the event. In the closing stages, Dennis Prunty would not be denied and he drove to the victory followed by Alex Prunty and Ryan DeStefano. Rich Bickle finished fourth which secured him the combined overall title between the two features. Rich Loch finished fifth. Steve Apel crossed the finish line in sixth followed by R.J. Braun and Brad Keith in seventh and eighth respectively. Nathan Matz and Mark Eswein completed the top ten finishers in the second feature.

Dennis Prunty was the winner of the super late model fast dash and Luke Fenhaus was the fastest qualifier after touring the speedway in 11.191 seconds.

Ryan Gutknecht drove to the lead and won the 40-lap late model feature in convincing fashion. Jacob Nottestad moved from his eighth place starting position to finish second while Brian Holtz also advanced six positions to finish third. Ryan Craine and Jordan DeVoy rounded out the top five in fourth and fifth respectively. Zach Prunty took the checkered flag in sixth followed by Cole Thomas and Jack Stern in seventh and eighth. Jerry Eckhardt finished ninth and Tom Berens was tenth. Zach Prunty and Tyler Schley were the winners of the late model heat races and Jacob Nottestad topped qualifying with a lap at 11.906 seconds.

Dale Lecus Jr. took the lead on lap 24 of the 35-lap sportsman feature and drove to his second main event victory of the season. Paul Wagner chased Lecus in the closing laps and finished second followed by Andrew Meyerhofer in third. Dan Calhoun finished fourth and Bobby Gutknecht was fifth. Tytus Helgestad won the sportsman heat race in his first Slinger appearance and Bobby Gutknecht set fast time at 12.777 seconds.

Dave Gauthier on the Speedway Guest car race driving the Sidetracked entry and Ryan Lovald won the Figure 8 feature which ended in spectacular fashion with a meeting in the “X between Shane Becker and Nick Ostberg. 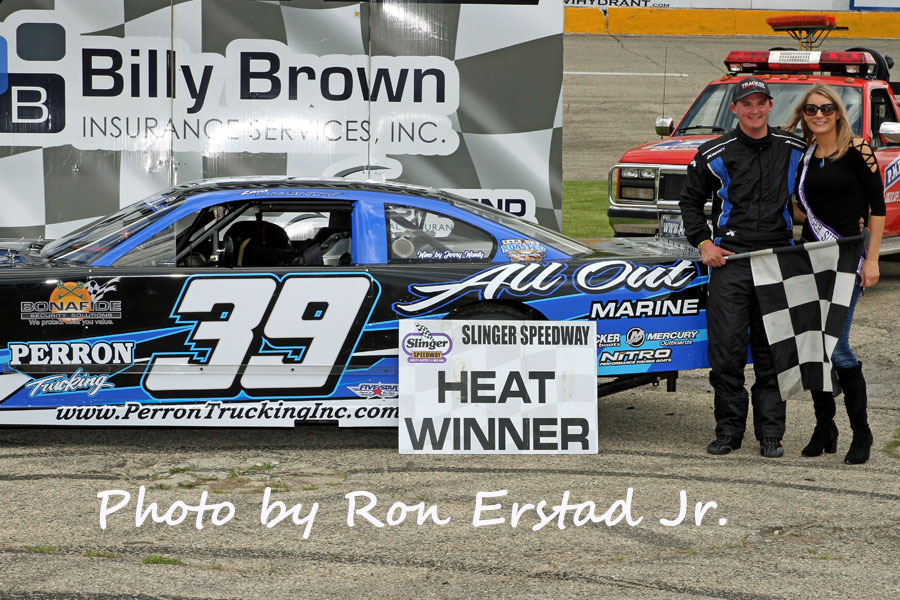 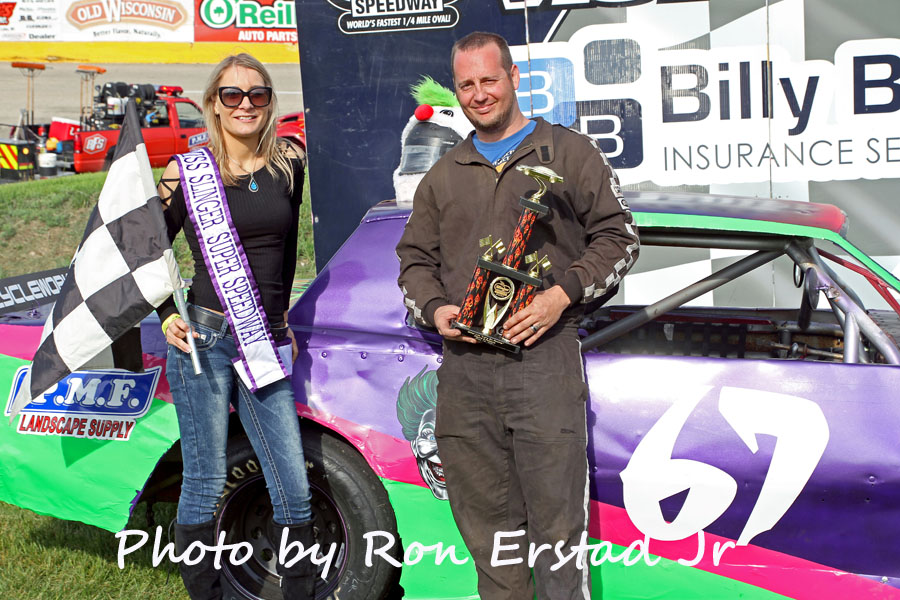 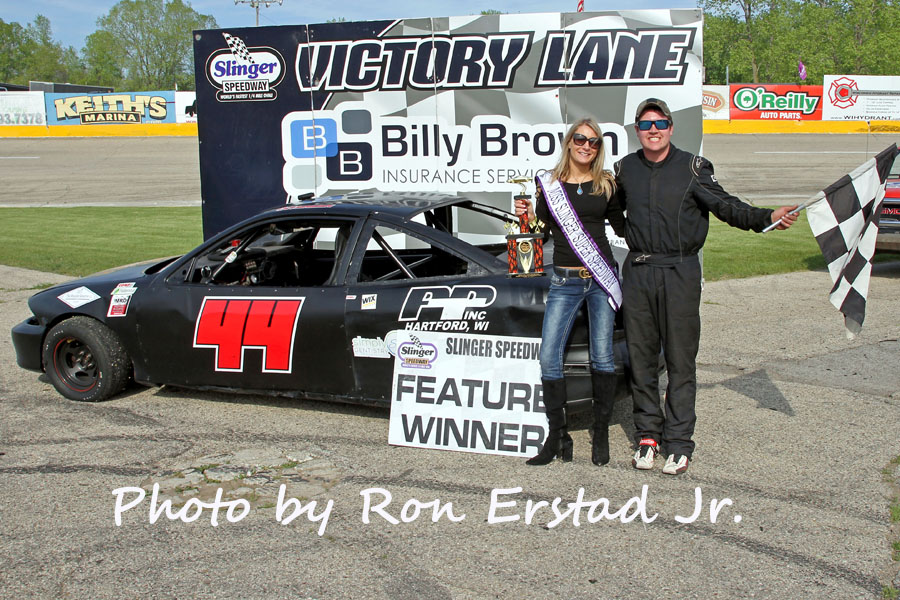 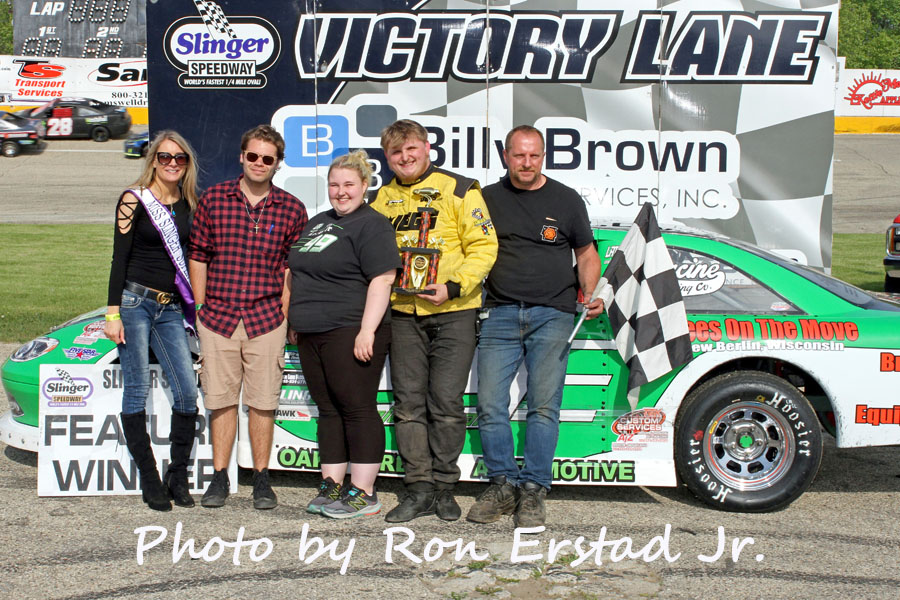 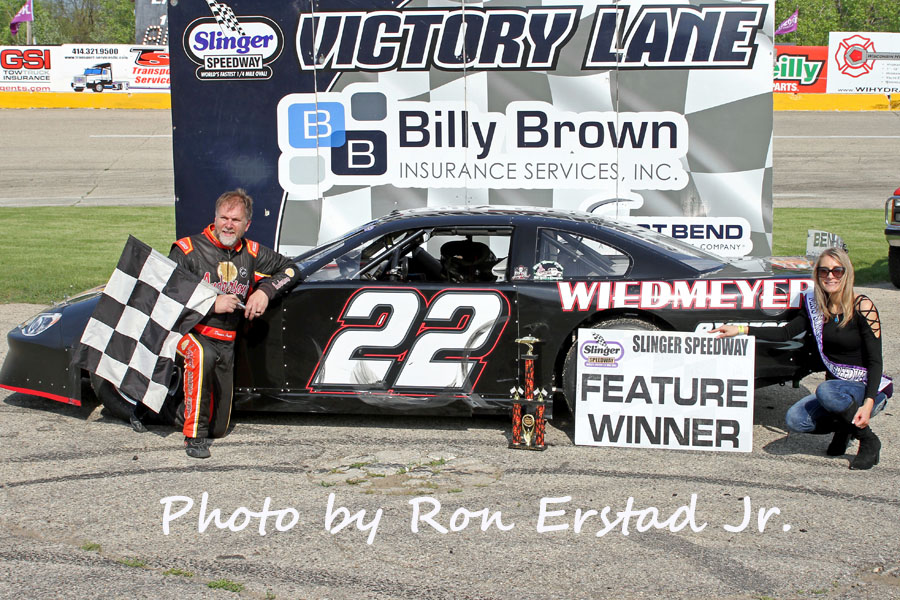 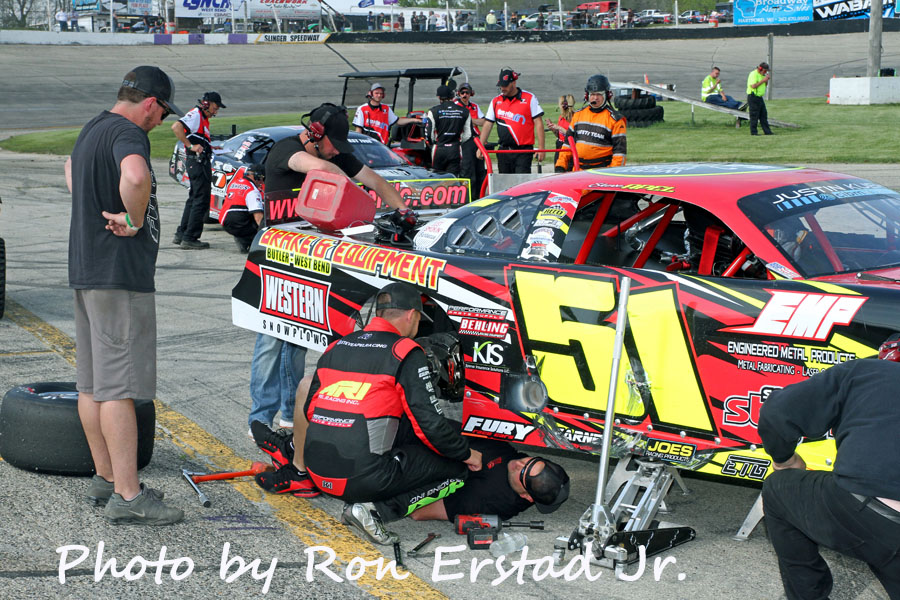 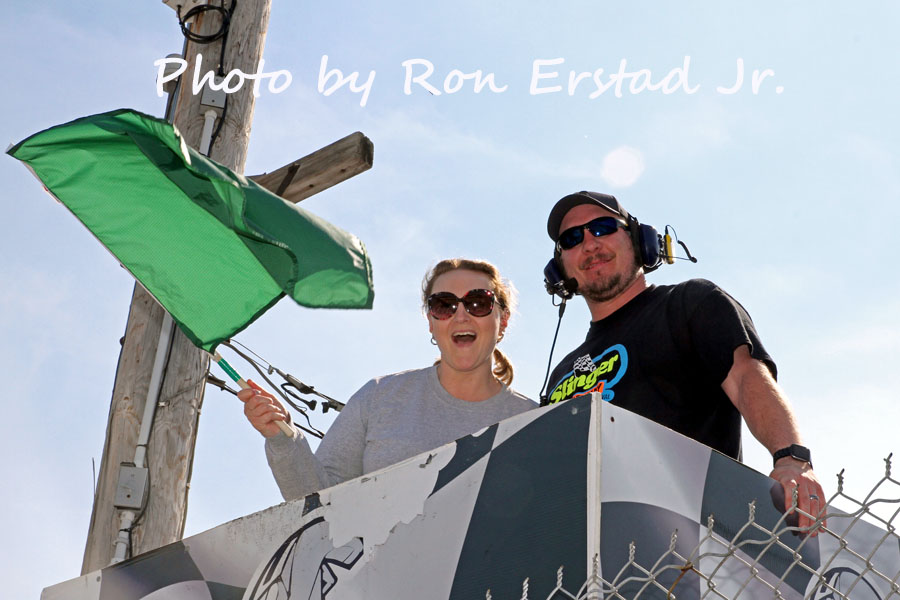 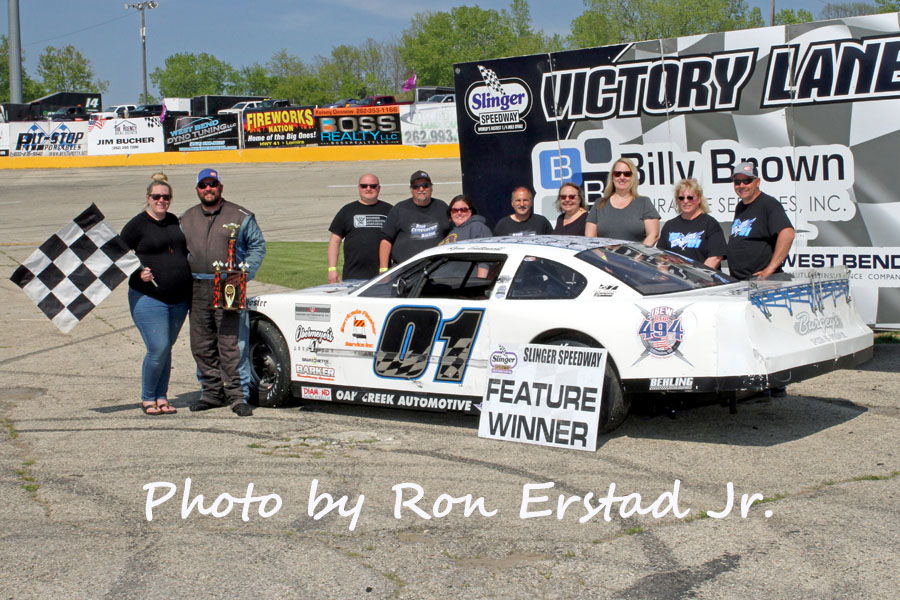 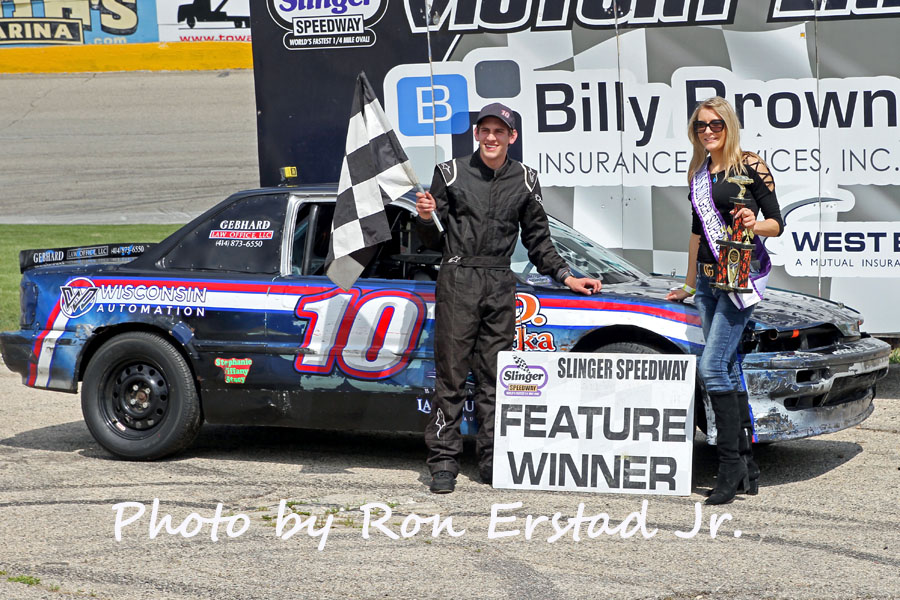 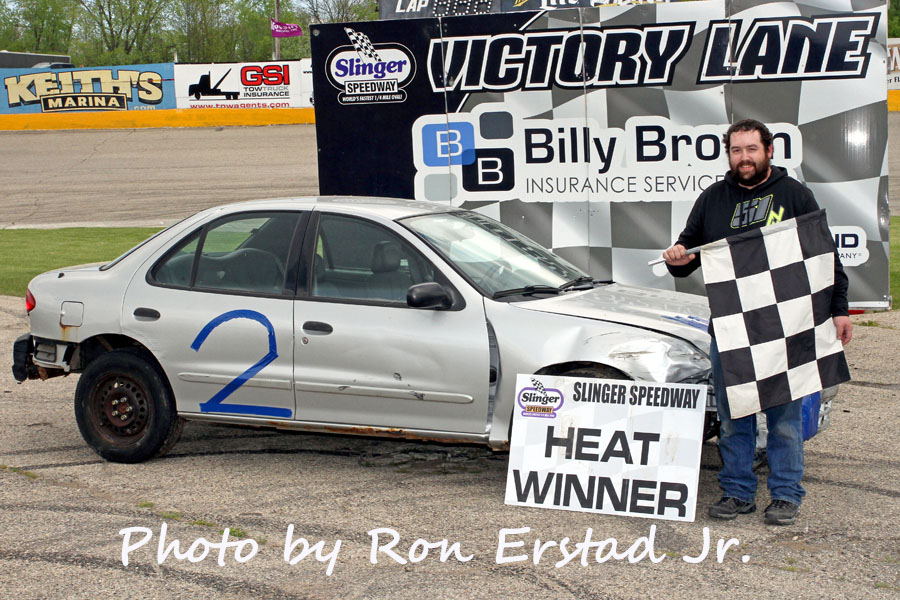 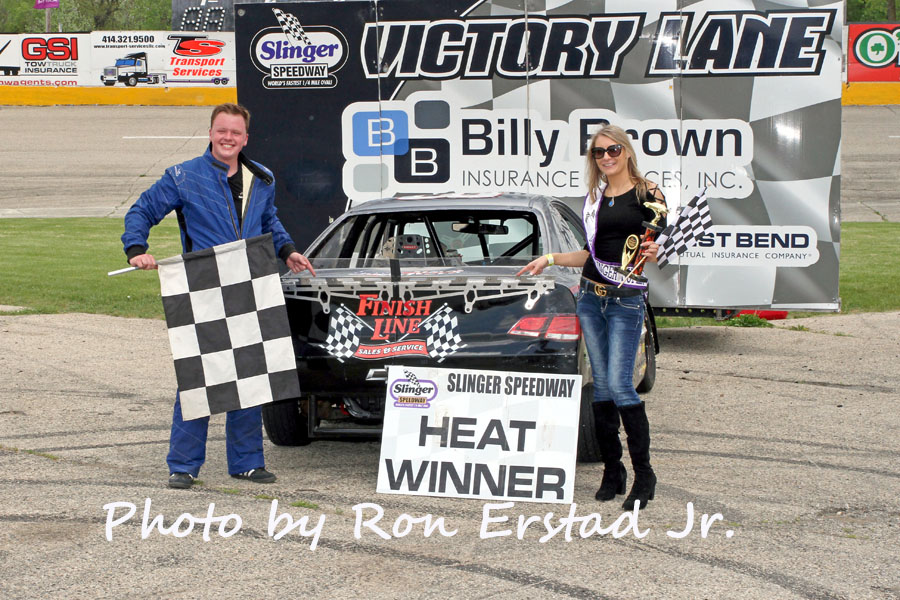 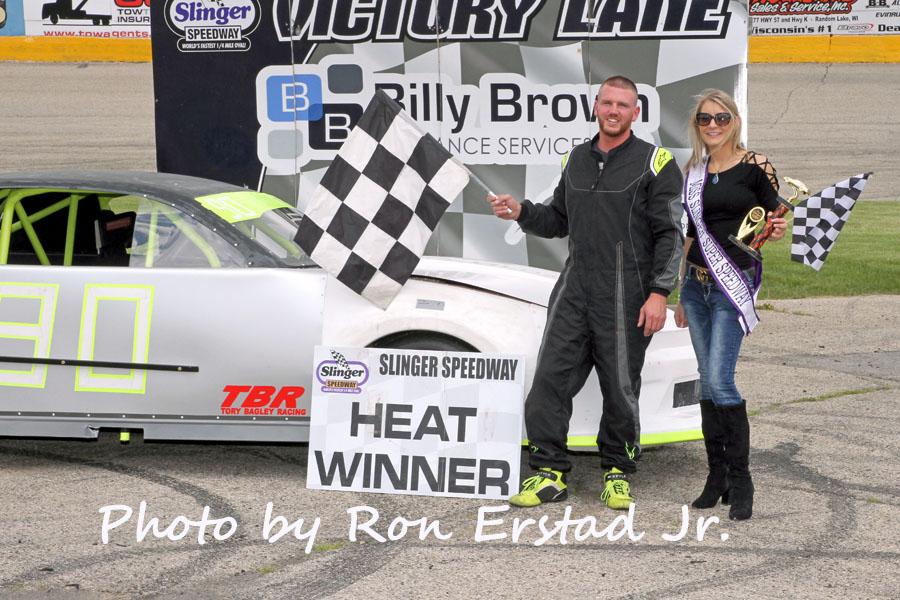 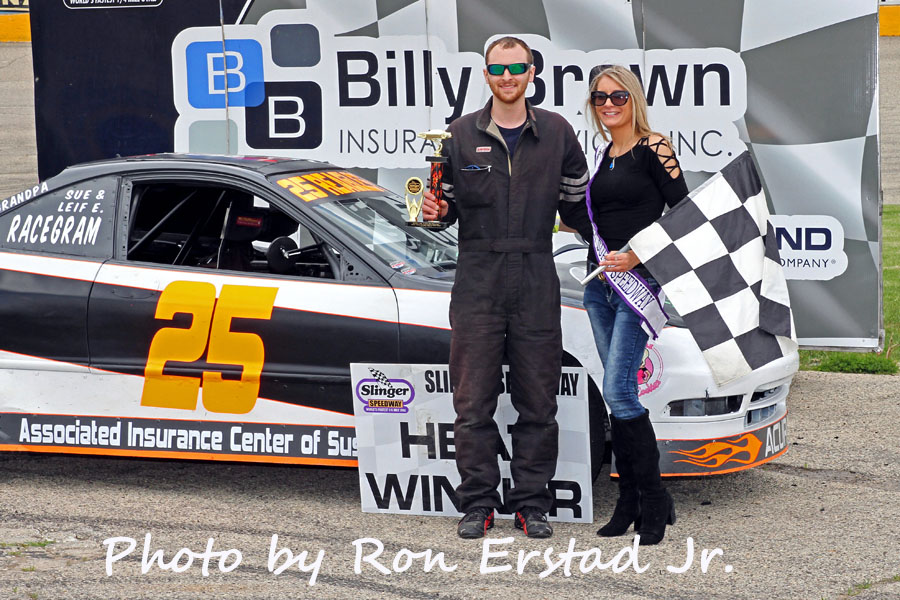 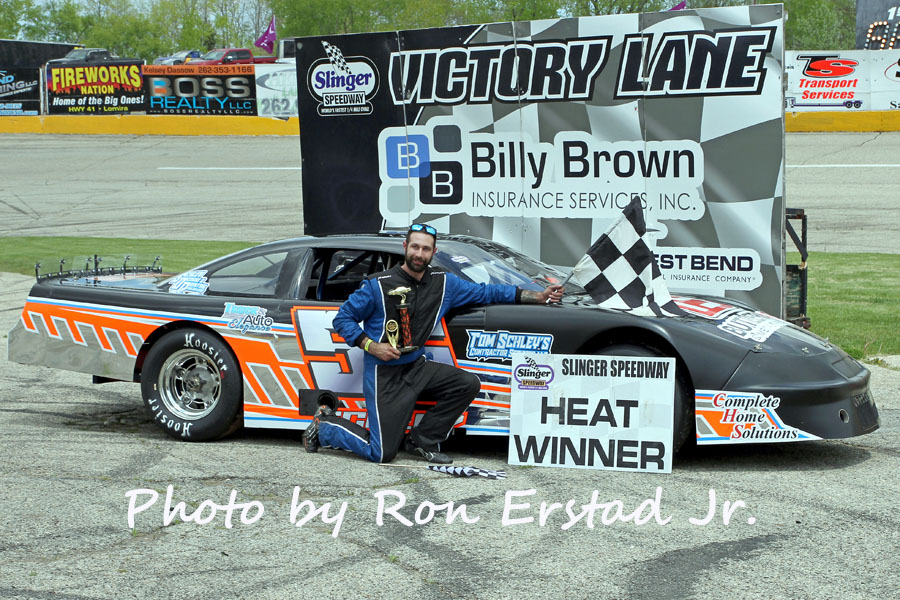