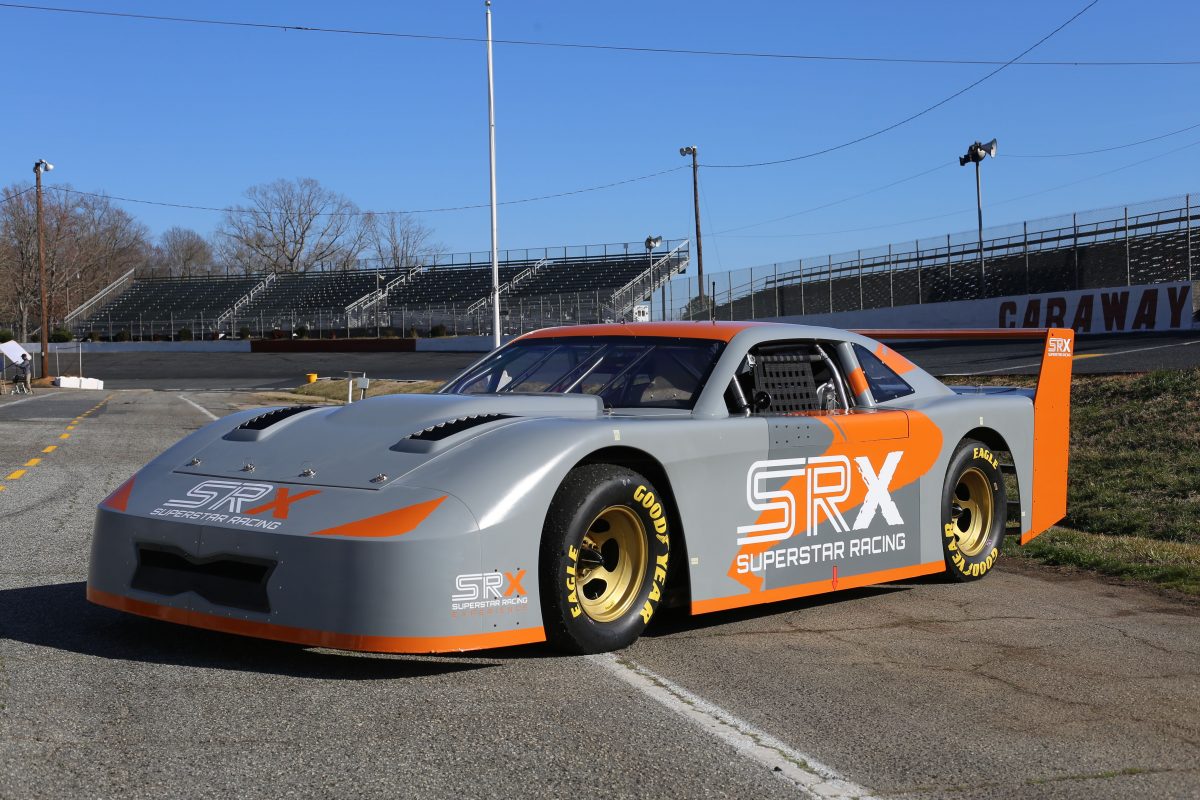 MOORESVILLE, N.C. (May 6, 2021) – Superstar Racing Experience (SRX) has announced the format for its six-race short-track series that will debut this summer on Saturday nights in primetime on the CBS Television Network and streaming live on Paramount+.
Each event will consist of three parts: two 15-minute heat races and a 100-lap feature race, with the heats setting the starting lineup for the feature. Points earned in both heats and the feature will count toward the season-ending championship. The season-opening SRX race is June 12 at Stafford (Conn.) Motor Speedway with the live broadcast starting at 8 p.m. EDT. Details on the event format are as follows:
Heat Race No. 1:
●  Timed race (15 minutes). When time is up, leader is shown white flag signifying one lap remaining.
●  All drivers draw for their cars to start this heat.
●  Field is lined up by a random draw.
Heat Race No. 2:
●  Timed race (15 minutes). When time is up, leader is shown white flag signifying one lap remaining.
●  Drivers’ finishing position in Heat Race No. 1 will be inverted for start of Heat Race No. 2.
Feature Race:
●  Distance is 100 laps (except at Slinger Speedway where distance is 150 laps).
●  Starting lineup is based on finishing position in Heat Race No. 2.
●  Unlimited attempts at a green-white-checkered finish.
Points will be awarded in both heats and the feature. In each heat, the winner receives a maximum of 12 points. Second place earns 11 points with every position in descending order receiving one fewer point, with the 12th-place finisher earning one point. Points increase in the feature, with the winner receiving 25 points, second place 22 points, third place 20 points, fourth place 18 points, fifth place 16 points, sixth place 14 points, seventh place 12 points, eighth place 10 points, ninth place eight points, 10th place six points, 11th place four points and 12th place two points.
“It was very important to come up with a format that would provide the best entertainment to our fans while rewarding the drivers for their performance. This format will do that,” said Ray Evernham, co-founder of SRX. “Every driver has the same opportunity. They’re in a car that’s very different because it’s so universal. It’s a road-course car first, a pretty good dirt car, and just an OK paved oval car. That takes the advantage away from the stock-car guys who run ovals all the time. We’ve tried to take the car out of the equation and force these guys to use the skills that we pay to see – how to figure out a new surface, how to figure out a new racetrack, how can they make this car go around using the old-school tools of the steering wheel, the gas pedal and the brake pedal. Driver input is what’s really important with this racecar, and this format accentuates that.”
“The SRX team and CBS have created a great format that will make for an exciting viewing experience,” added Pam Miller, producer, CBS Sports. “The short heats will make the competition between drivers more intense, creating a thrilling broadcast from the early moments through to the final laps of the feature race. Watching those battles play out on the short tracks will add drama and excitement, entertaining viewers each week.”
“With this format, you not only have to be the fastest driver, but you’ve got to be the smartest driver too,” said Tony Stewart, SRX co-founder and driver. “This is going to be a challenge. These are new, purpose-built racecars that none of us have driven before. Every track is so different, and we don’t know how abrasive the pavement tracks are going to be and what kind of grip we’re going to have on the dirt tracks. Even for the local all-stars who have turned thousands of laps at their particular track, they’ll be doing it in a totally different environment. It’s all unpredictable, but that’s what’ll make for great racing and a great fan experience, whether they’re in the grandstands or at home watching on CBS.”
After SRX’s debut at Stafford, the series visits back-to-back dirt tracks – Knoxville (Iowa) Raceway on June 19 and Eldora Speedway in Rossburg, Ohio, on June 26. SRX returns to pavement July 3 at Lucas Oil Raceway near Indianapolis and then ventures north to Slinger (Wis.) Speedway on July 10 before its season finale July 17 at the Nashville (Tenn.) Fairgrounds Speedway where the inaugural SRX champion will be crowned.
Stewart, Tony Kanaan, Paul Tracy, Bobby Labonte, Willy T. Ribbs, Bill Elliott, Ernie Francis Jr., Marco Andretti, Helio Castroneves and Michael Waltrip are the 10 fulltime drivers comprising SRX. Local all-stars join the SRX regulars at the first five races, with six-time NASCAR Whelen Modified Tour champion Doug Coby at Stafford, four-time Knoxville track champion Brian Brown at Knoxville, five-time USAC Silver Crown champion Kody Swanson at Eldora, prolific USAC and NASCAR Whelen Modified Tour winner Bobby Santos III at Lucas Oil Raceway and the winner of the July 6 Slinger Nationals – one of the most prestigious short-track races in the country – competing in the penultimate SRX race at Slinger. Inclusion of additional drivers to round out the 12-car fields will be announced at later dates.
About SRX:
Superstar Racing Experience was created by a team consisting of Sandy Montag and The Montag Group, George Pyne, NASCAR Hall of Fame crew chief and team owner Ray Evernham, and legendary driver Tony Stewart. The Montag Group leads business operations and Evernham oversees all racing operations. Pyne is a member of the Board and serves as an advisor. For more information, please visit us online at www.SRXracing.com, on Facebook, on Twitter and on Instagram.