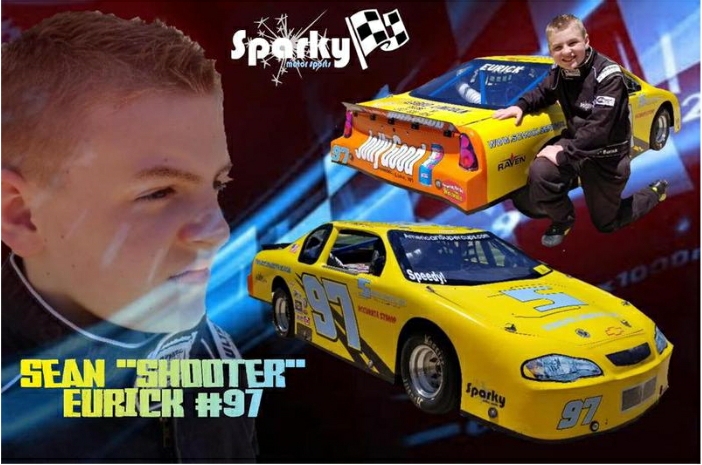 Driver of the 97 American Super Cup

How did you get into racing?
My dad was into cars. I watched the movie “Cars” at 2 ½ and became obsessed with racing from that day.

What do you like about Slinger Super Speedway?
I love the high banks and the speed through the turns. It’s a very wide track with lots of history, which makes me love the track as well.

You will be visiting Slinger with the American Super Cup Series this Sunday. Tell the fans what an American Super Cup is.
The American Super Cups are half scale stock cars in which you can start at age 10. People over 60 also run our series. We run tuned Honda GX390 engines, which have about 25hp, and can hit up to 80mph on certain tracks. It is a very family- and cost-friendly series, with cars starting at about $3,400.

Who do you need to thank?
I would like to thank my dad for working on my car and setting it up. I’d also like to thank Jolly Good Soda, Garbo Lincoln, and School Service for supporting our team, and allowing me to race. I would like to thank Mick Ellis for running our series and making the American Super Cup series as good as it is.

Tell us a little about yourself.
I am 13 years old. I go to New Berlin Eisenhower Middle/High School. I usually am doing something racing-related, but I also take parkour lessons in my spare time.

If you could bring any fictional character to life, who would it be and why?
Cal Naughton Jr. from “Talladega Nights”, since we both have a notorious habit of finishing second, and winning races by not actually crossing the line first.

What is your favorite racing memory at Slinger?
Seeing my first Nationals in 2016, and seeing my real racing hero Matt Kenseth win the Slinger Nationals in front of my own eyes. That was also my first Super Late Model race that I watched.

How did you get your number (#97)?
On a video game, I wanted to choose Matt Kenseth’s first NASCAR number, which I thought was 97. It was actually 94, but 97 seemed to stick with me. When I wanted to switch my number, 97 was my first choice since many Slinger Champions including Alan Kulwicki have used that number.

Which Slinger driver, past or present, do you respect the most?
Matt Kenseth because he respects all his fans, and never really got into many driver-to-driver incidents.