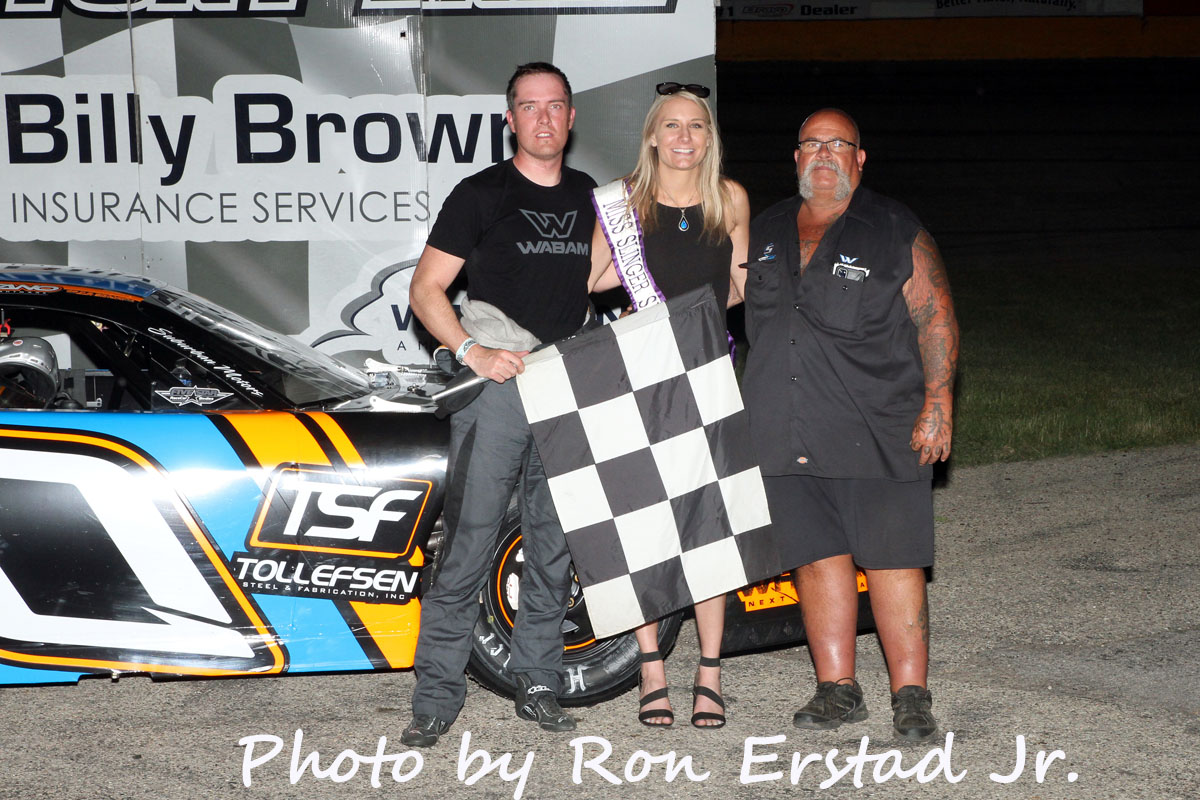 “Wow…these guys are good,” DeStefano said in victory lane following the thrilling finish as he scored his first feature win of the season, “I knew the car might not have been the fastest car at the end but it was still strong and I just took it to the outside and said ‘let’s see what we had up there’. It was fun and hopefully the fans got to see a good race.”

“It was pretty good and it was fun,” Braun stated after turning in his best super late model feature performance at Slinger despite coming up just short of the victory, “I was just trying to race him hard. He knew my weakness and he took it but it was a fun battle and we just came up a little bit short.”

Hard racing seemed to be the theme of the evening and several front runners including Steve Apel, Alex Prunty, and Rich Bickle found themselves deep in the finishing order or on the sidelines due to incidents during the event. Dennis Prunty, Luke Fenhaus, and Brad Mueller survived the excitement to complete the top five finishers in third through fifth respectively.

“It was pretty crazy,” was Dennis Prunty’s description afterwards, “My car was built four years before R.J. Braun was born and it was consistent but it’s only so fast and I had to wait for everyone else to fall off but I started catching them there at the end.”

“That’s how some guys race I guess,” Fenhaus said equally describing the hard nose racing that permeated the event where he brought home a fourth place finish, “We’ll just come back next week and try a little harder.”

“I wanted to capitalize on a good run,” said fifth place finisher Brad Mueller, “But I just couldn’t get going and it’s our second night with this car so we’ve got some stuff to figure out yet. There were some animals out front tonight and it was like Russian Roulette up there and I’m glad I finished fifth.”

Nick Wagner took the checkered flag in sixth place followed by Rich Loch in seventh and Rob Braun in eighth. Jacob Vanoskey and Steve Apel rounded out the top ten. Travelling drivers Carson Kvapil from North Carolina and Zach Telford from Idaho finished fourteenth and fifteenth in their Slinger debuts.

R.J. Braun was the winner of the super late model fast dash and Luke Fenhaus was the evening’s fastest qualifier with a lap of 11.205 seconds.

Ryan Craine captured his first career late model feature victory in the 40-lap main event as he held off Jordan DeVoy and Tom Berens at the finish. Ryan Gutknecht and Zach Prunty finished fourth and fifth respectively. Jerry Eckhardt finished sixth followed by Scott Shambeau and Jack Stern in seventh and eighth while Tom Jasinski and Tyler Hromadka completed the top ten.
Jerry Eckhardt and Zach Prunty were the winners of the late model heat races and Jack Stern set fast time with a lap of 12.179 seconds.

Alex Hartwig and Ayrton Brockhouse dueled for the lead through lapped traffic in the closing laps of the Bandolero 20-lap main event before Hartwig was able to secure the win. Brockhouse finished second and Lincoln Cain was a close third. Axel Oldenhoff took the checkered flag in fourth and Paxton Benz was fifth. The Bandolero heat races were won by Paegan Ellingson and Alex Hartwig while Ayrton Brockhouse was the fastest qualifier with a lap turned in at 14.511 seconds.

Rick Bruskiewicz won the Figure 8 race after Nick Ostberg and Bill Shavlik tangled while battling for the lead as they approached the final lap and the Sheryl’s 175 entry won the Speedway Guest Car event. 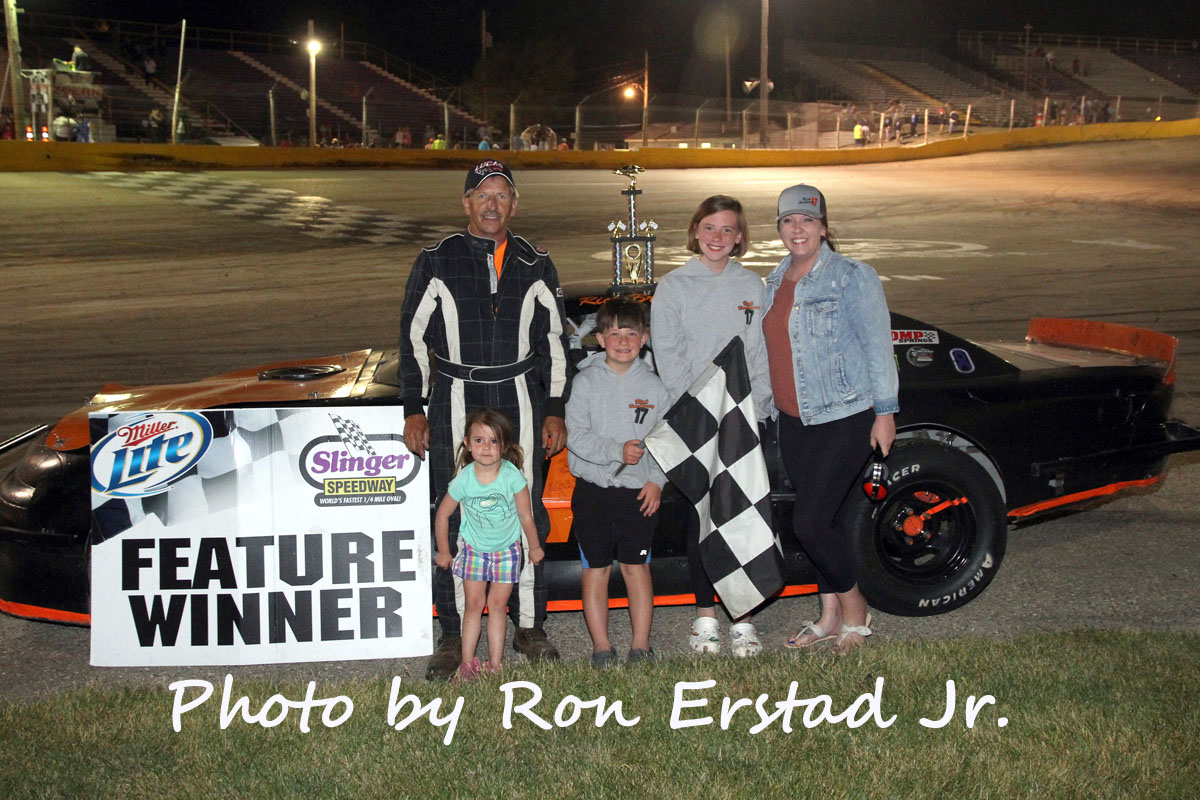 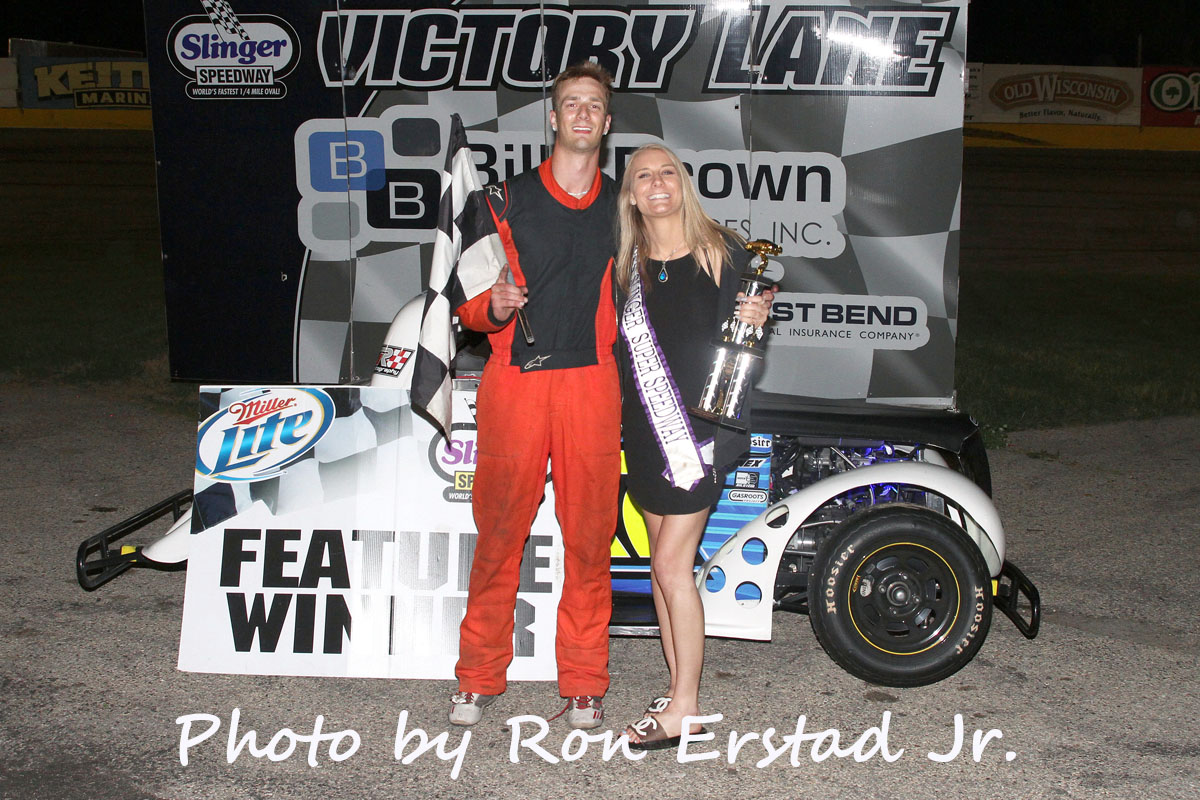 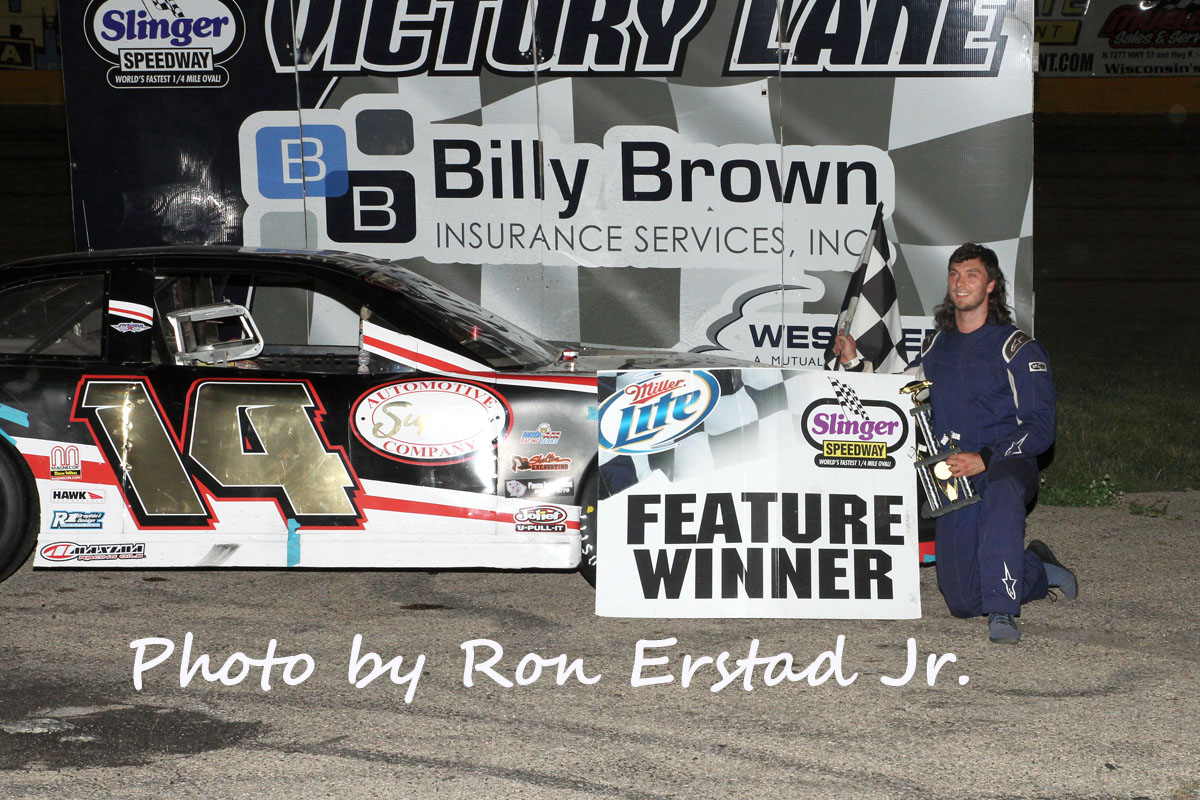 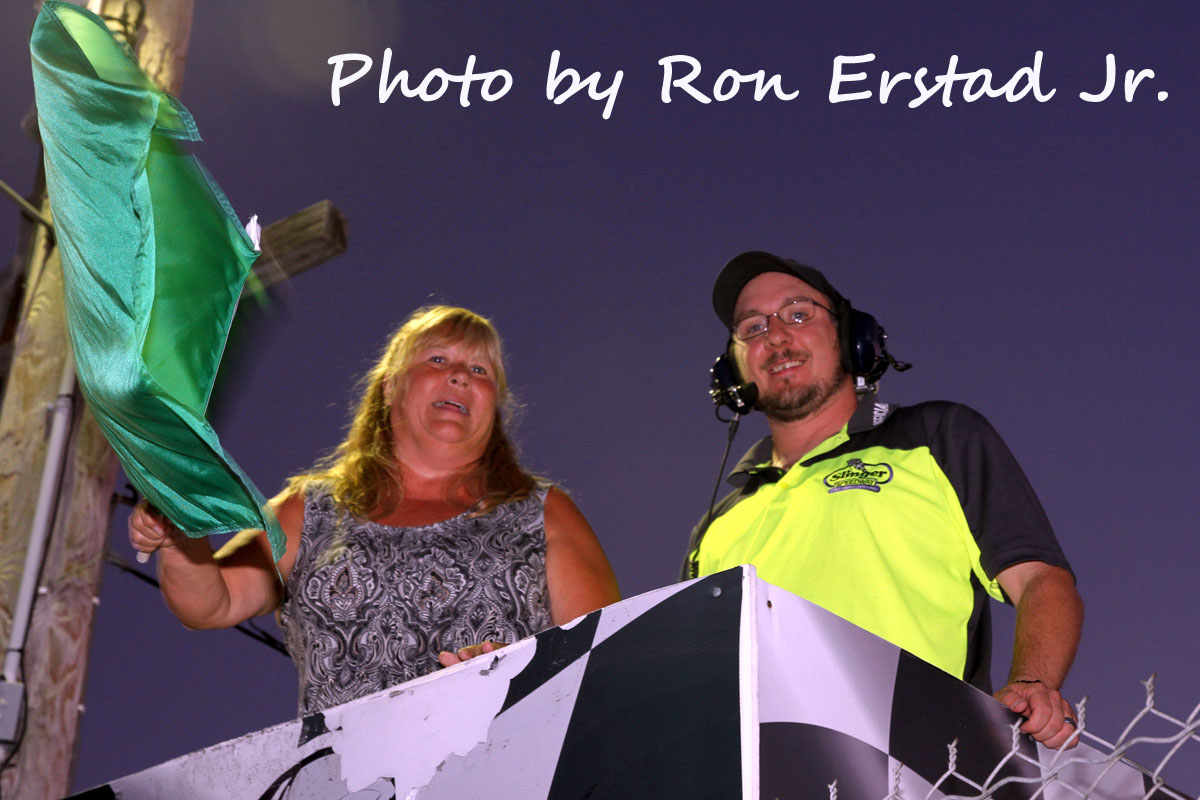 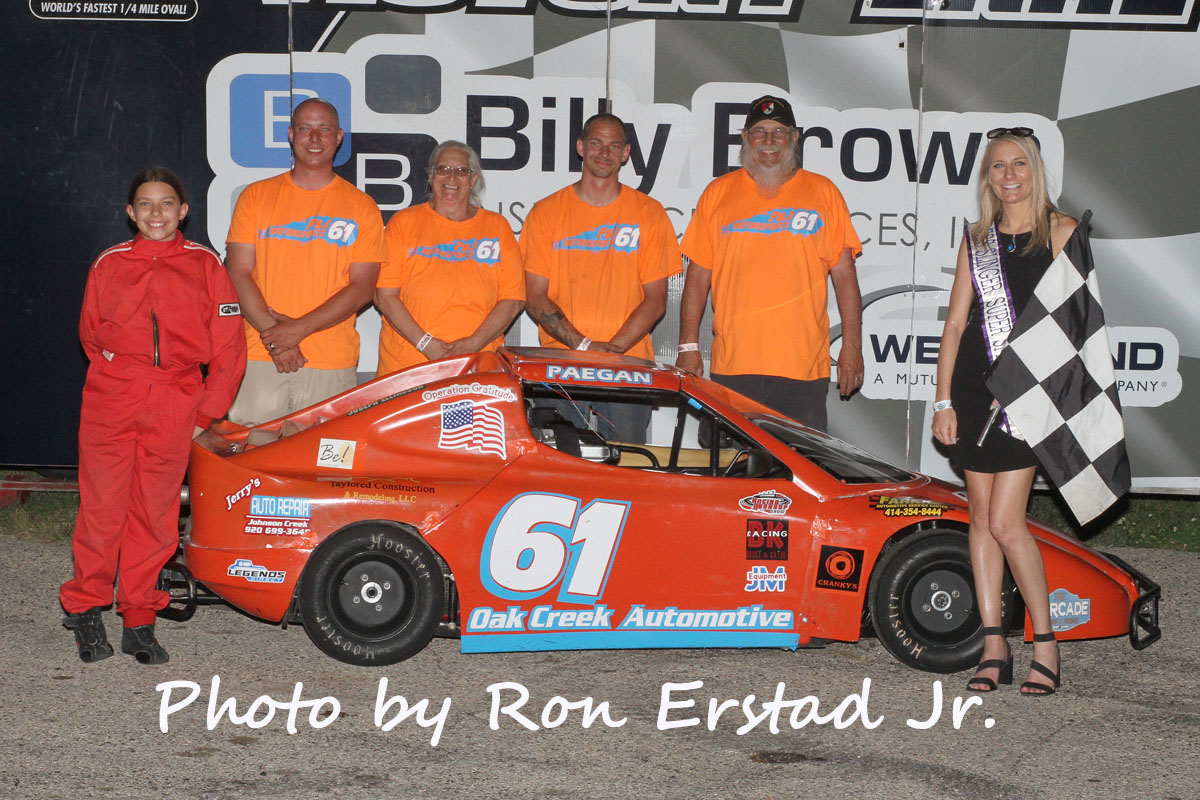 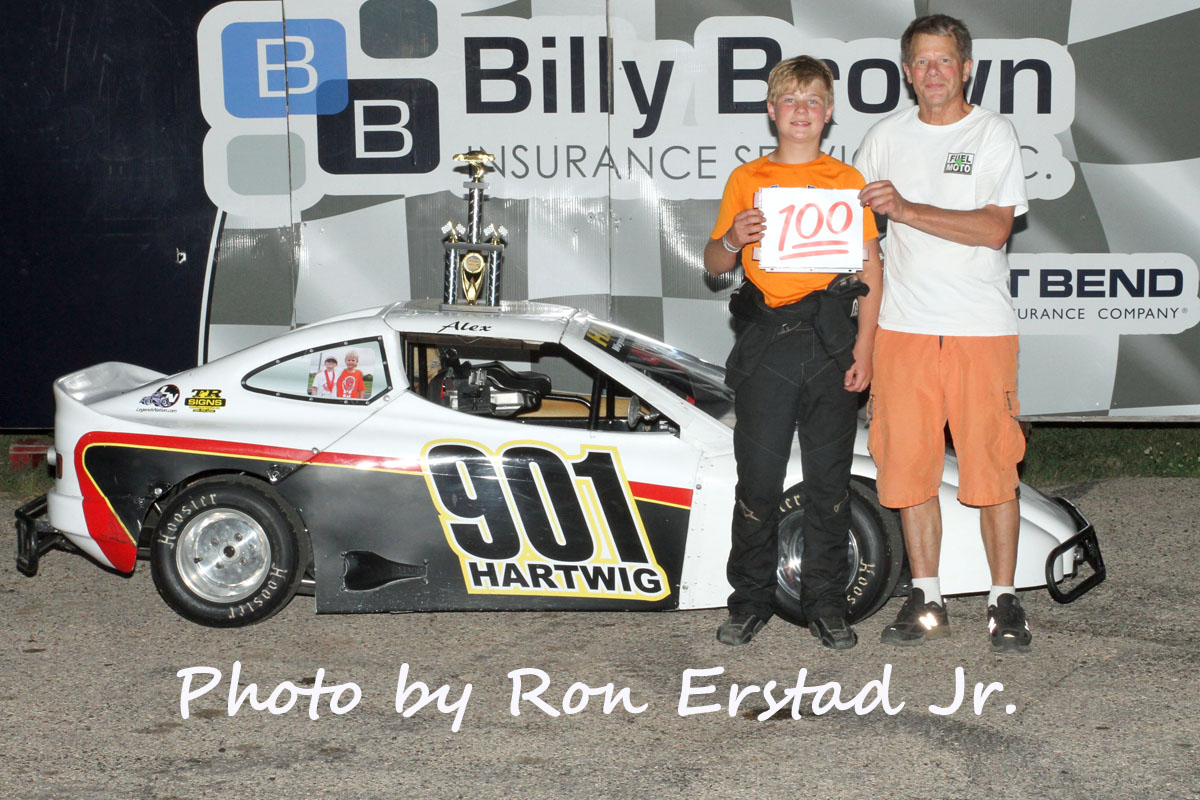 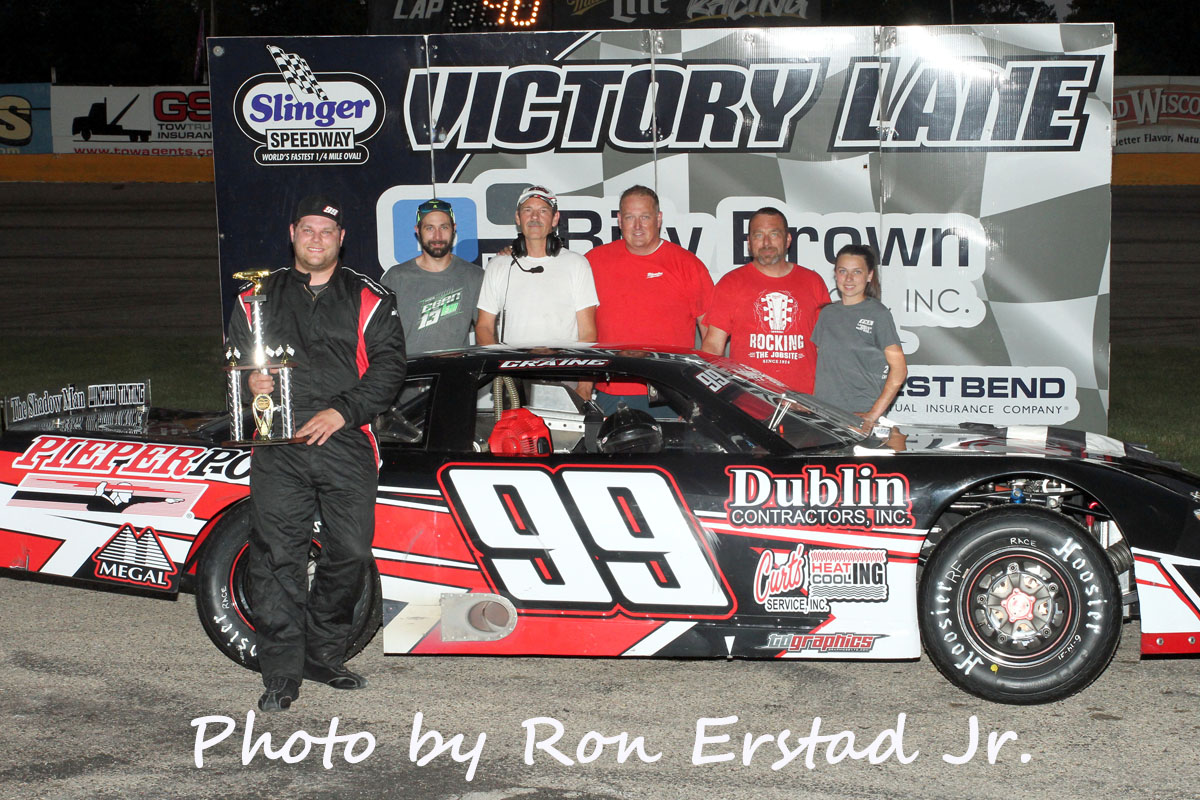 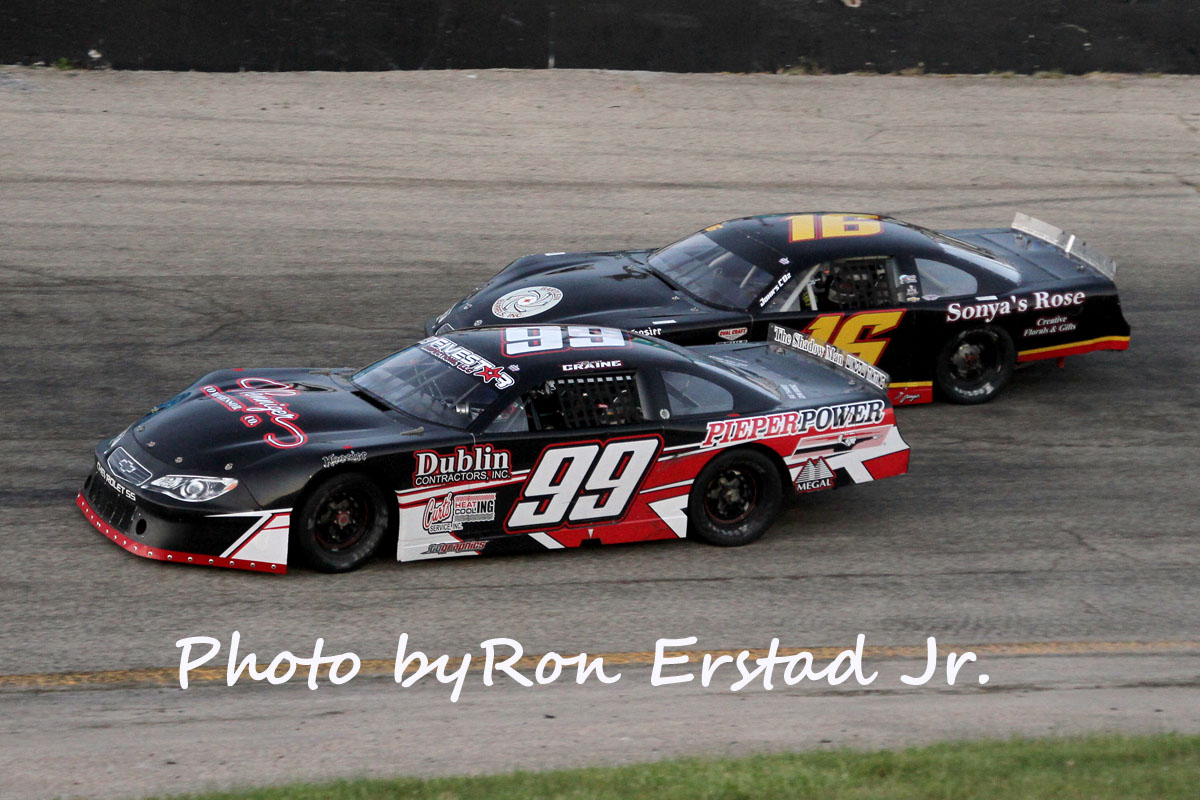 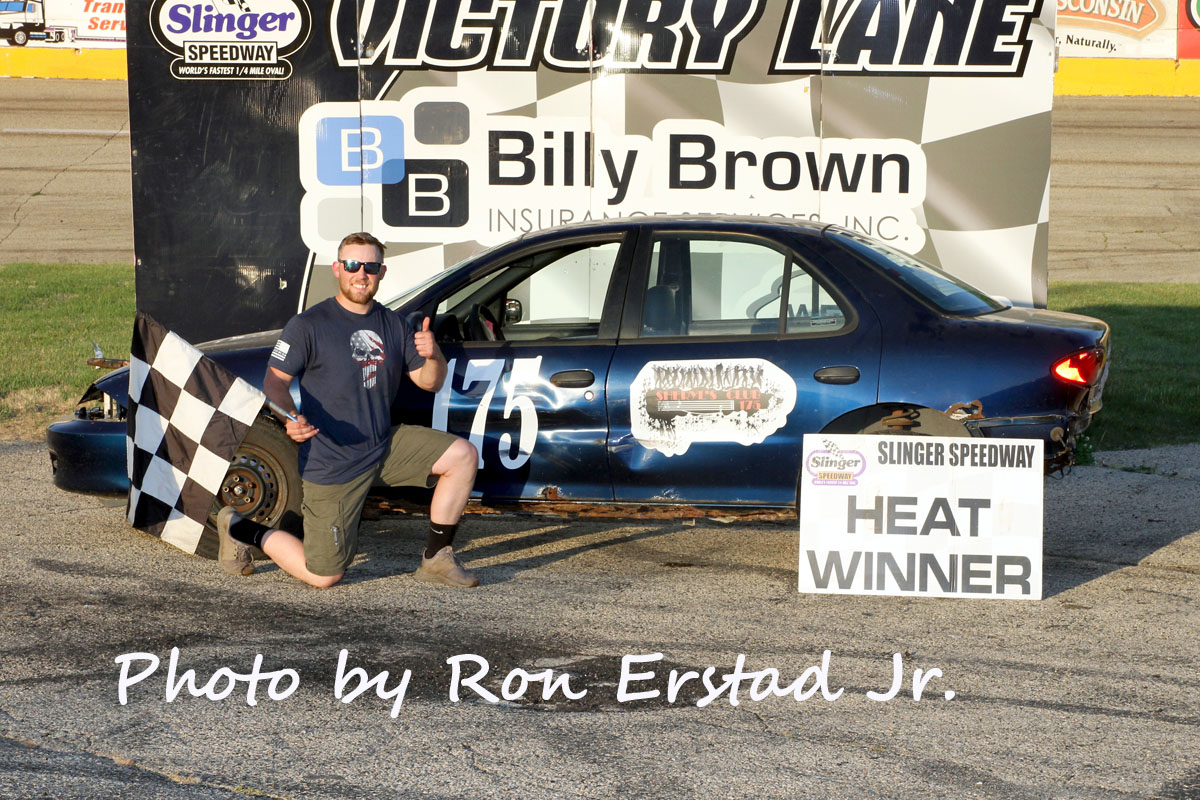 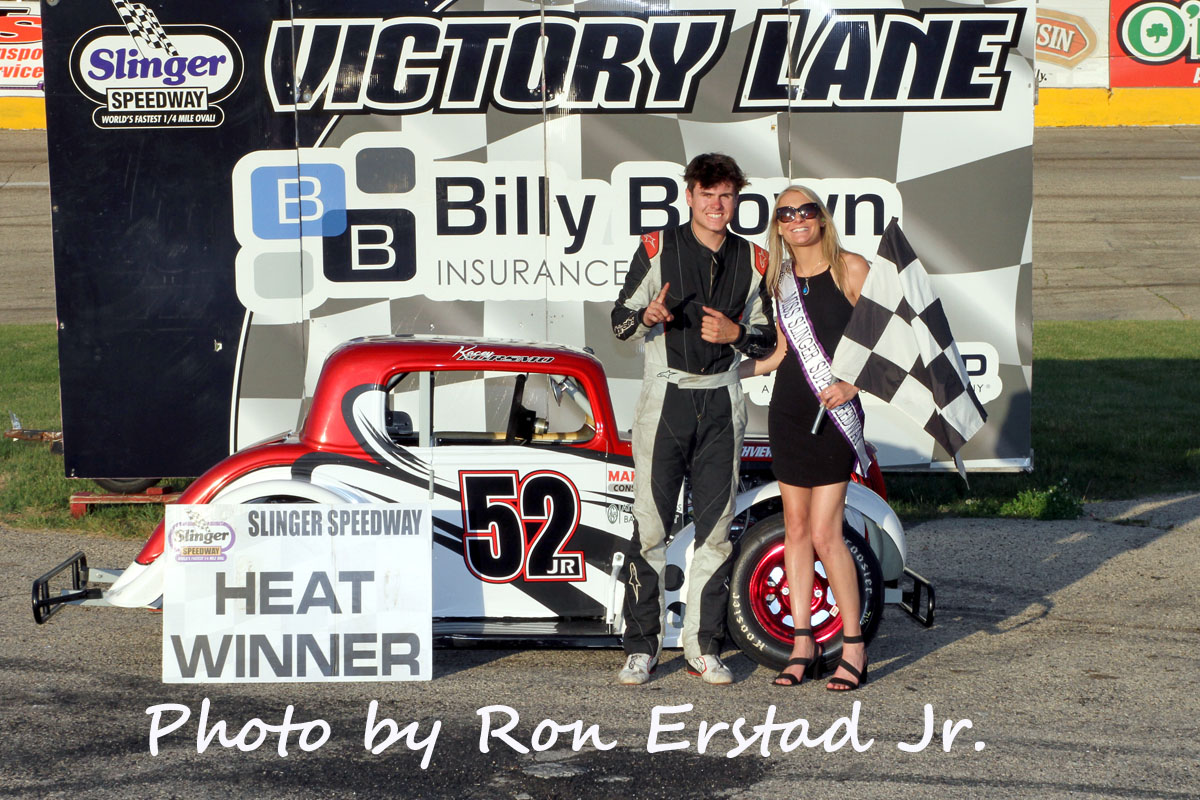 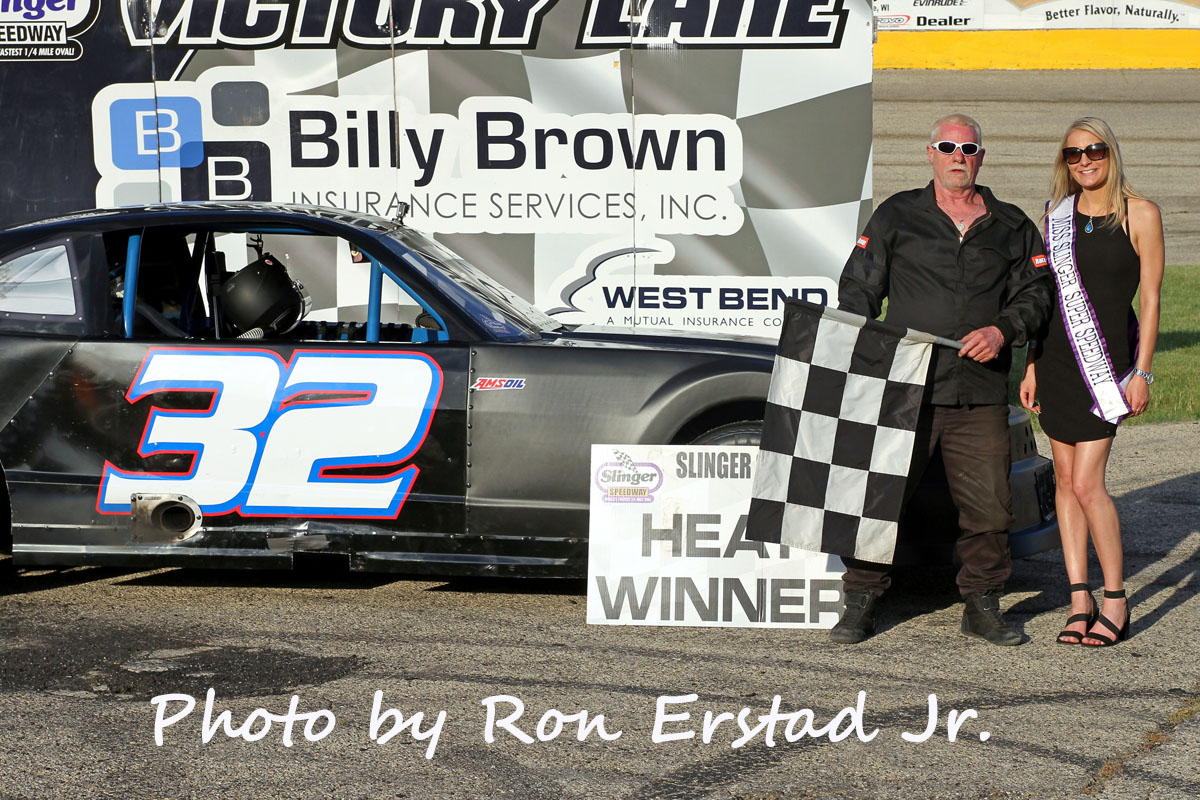 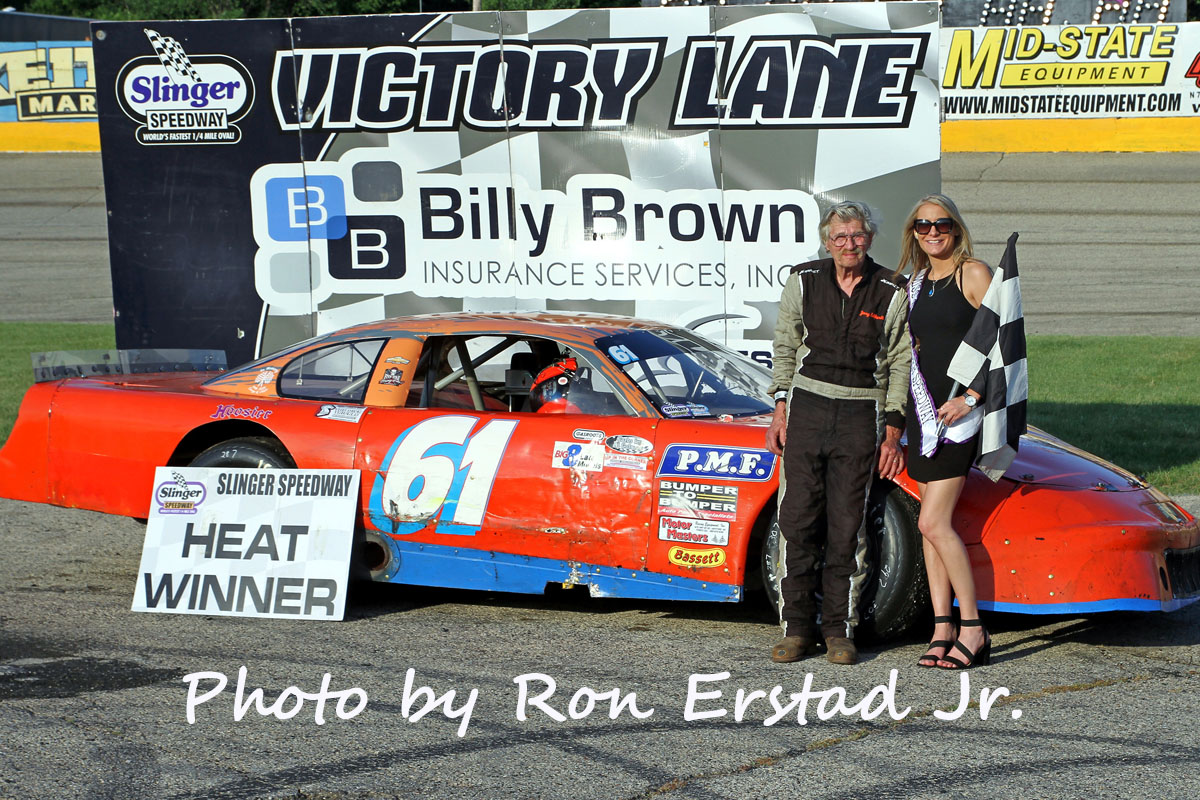 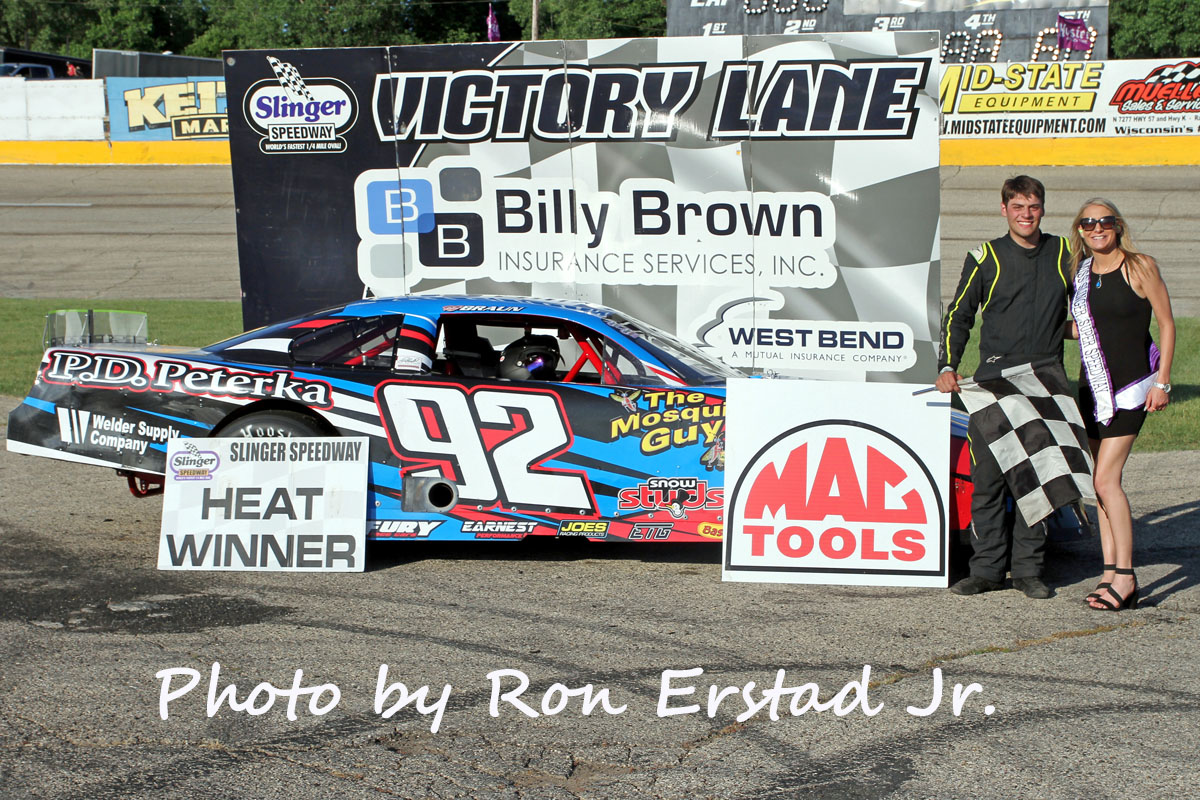 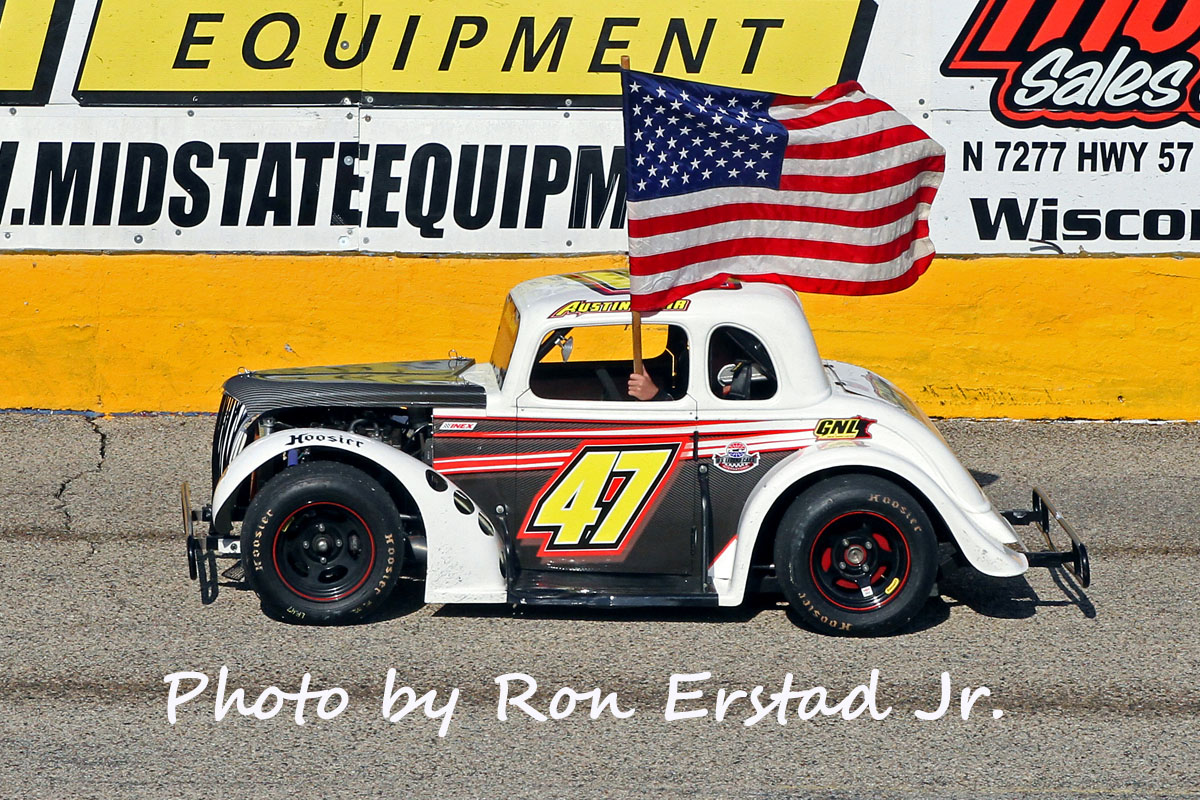 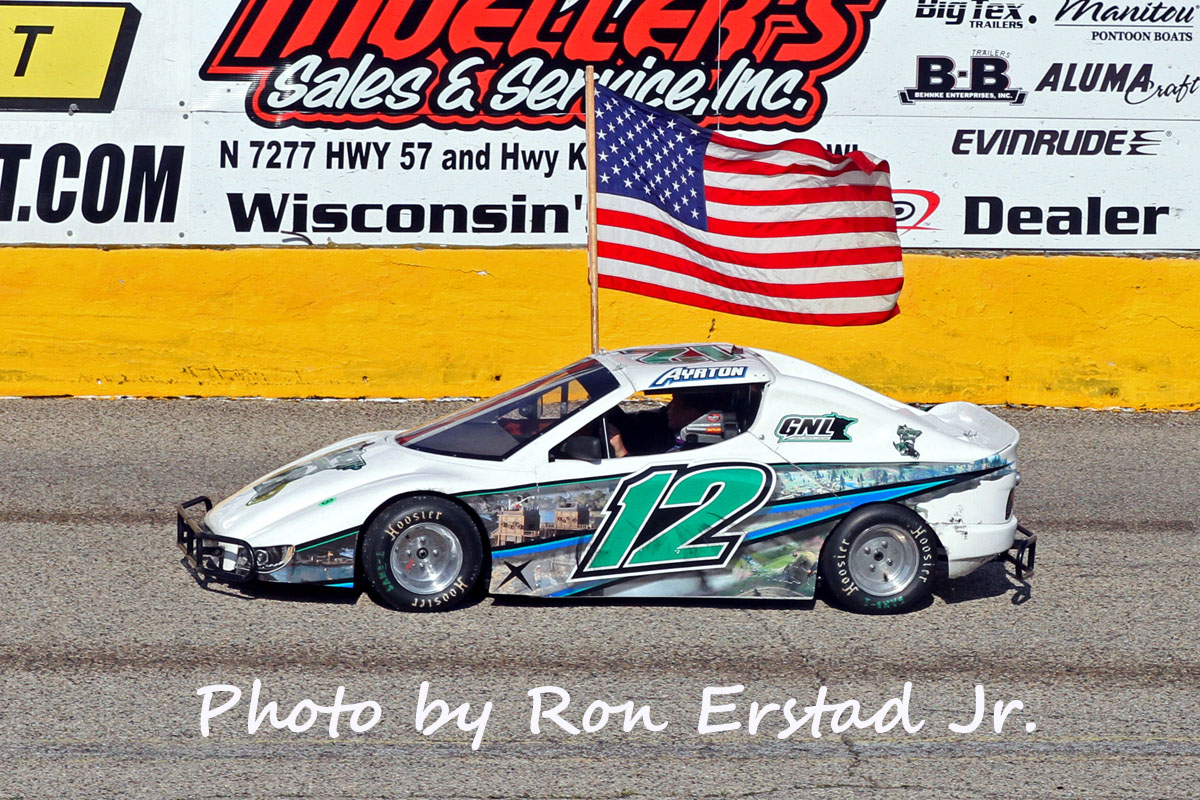 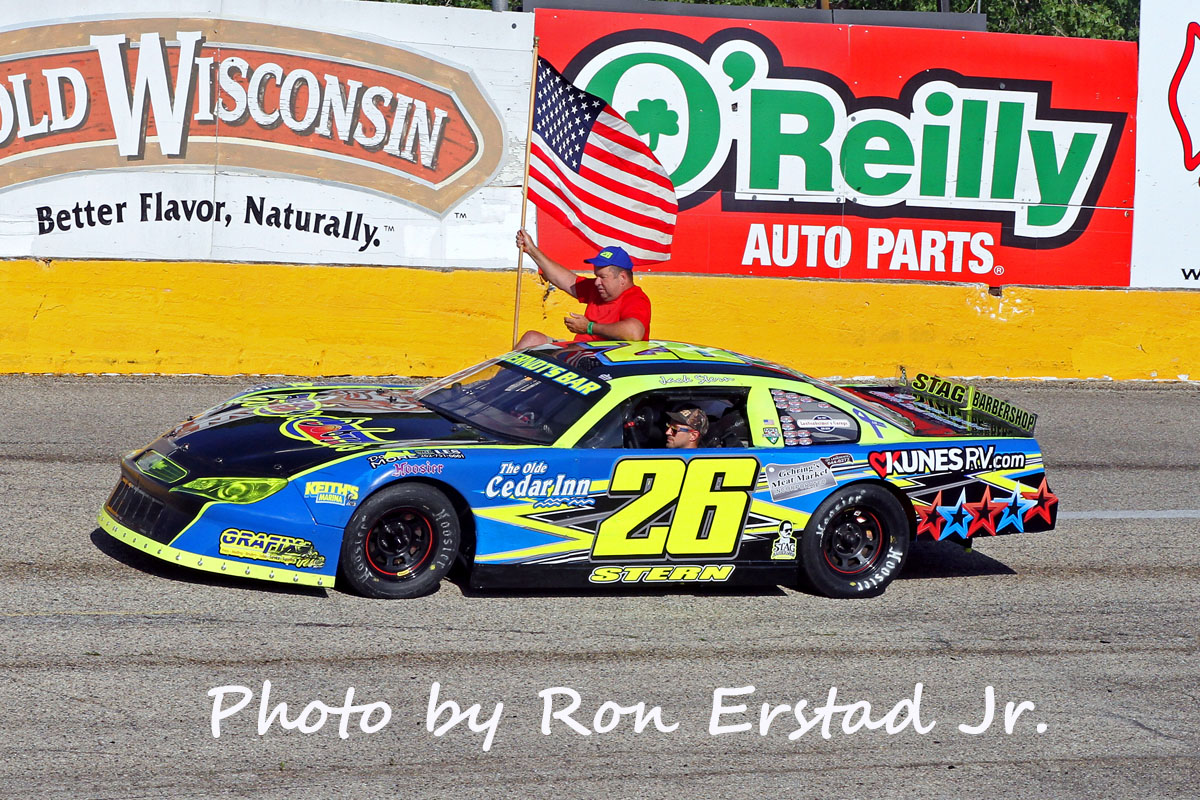 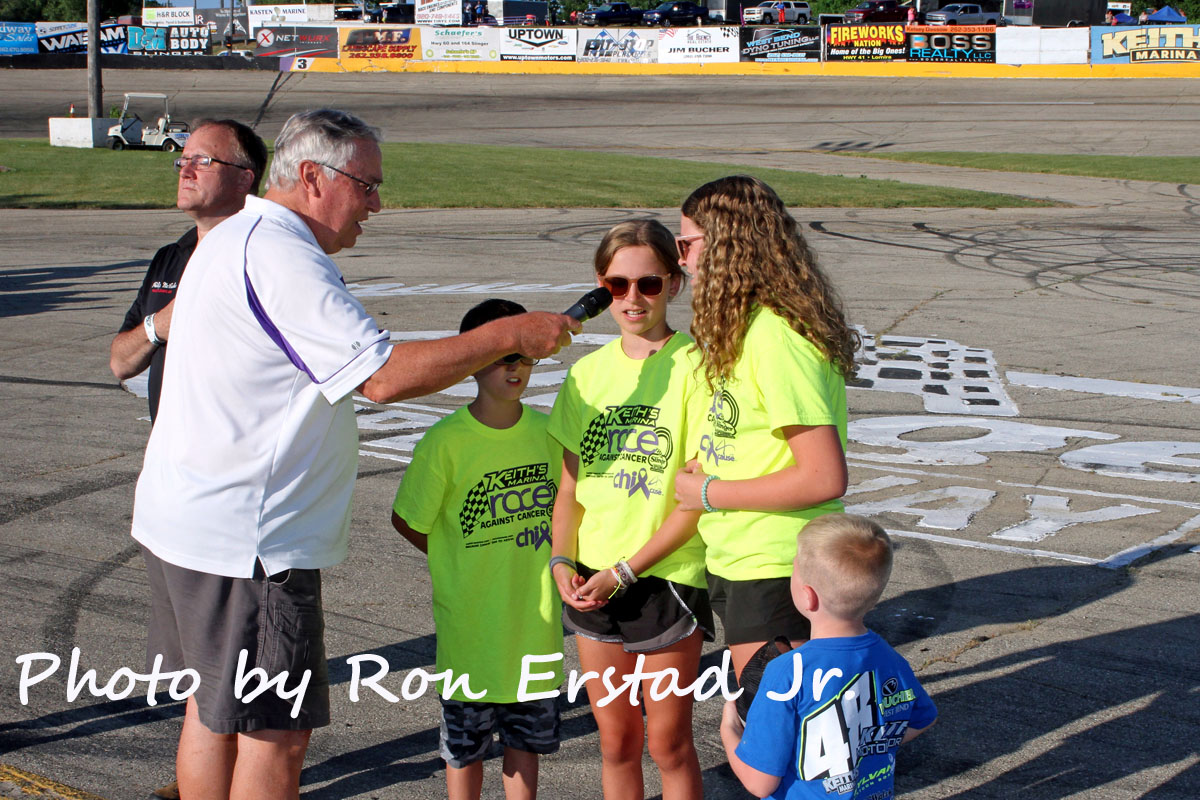