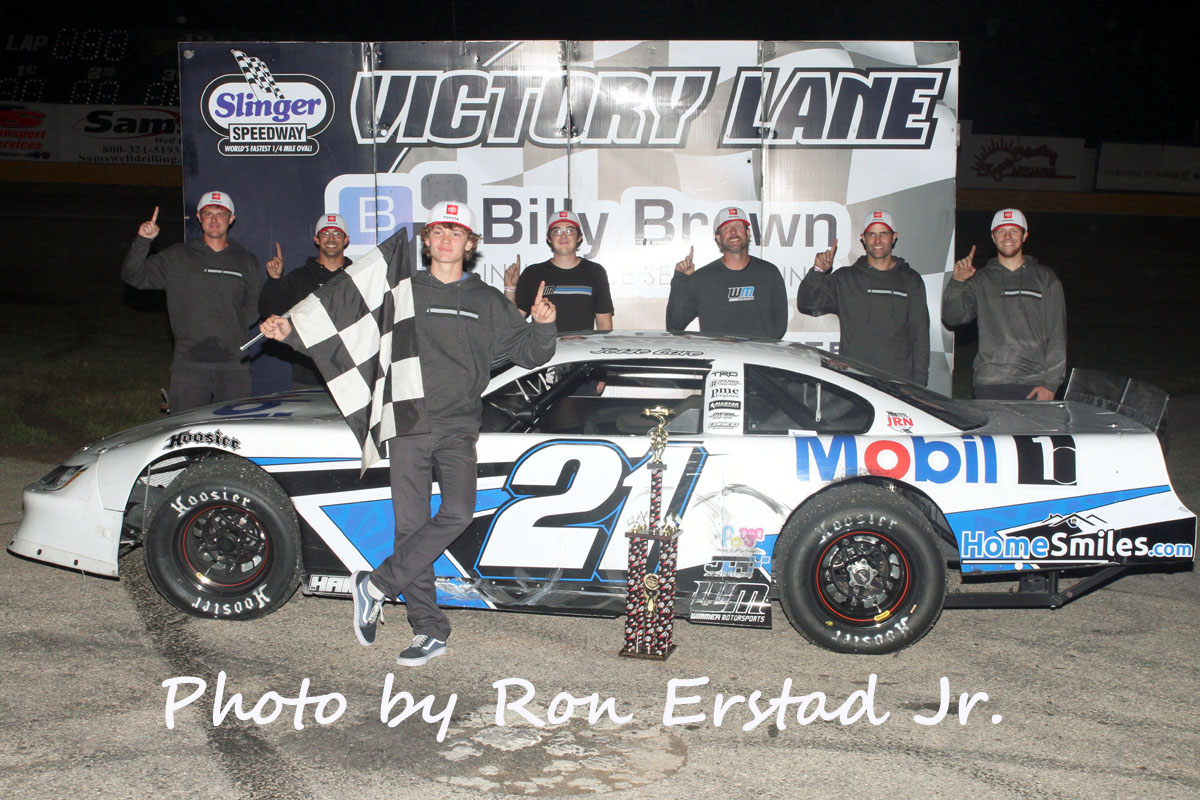 Love charged to the lead from the pole position and turned back the challenges of defending track champion Steve Apel in the early going before besting Rich Bickle and Grant Griesbach at the checkered flag.

“I’m normally not that emotional but I think I’m going to cry,” an impassioned Love told the crowd from victory lane, “It’s so special, I mean, racing with Rich (Bickle), obviously he was before my time so I didn’t even grow up watching him, but to have him say he was proud of me just means a ton.”

“We’ve had a lot of bad luck leading up to tonight, but tonight we qualified decent and started up front,” Love continued, “Racing hard with all those guys was really cool and I was kind of getting a little bit worried as the last restart kind of got a little bit rough with Steve (Apel) but it’s racing and I live for it so this is super special.”

“This was a great points night for me,” Bickle stated after finishing second while rivals Dennis Prunty spun to produce the only caution of the event and Steve Apel and Luke Fenhaus retired early from the race with mechanical problems, “This was probably the worse car I’ve had here all year so I’m pretty happy to run second.”

“I don’t know what we did wrong to the car but something changed because from practice to the qualifying we were pretty good,” Bickle said, “Then in the dash we weren’t very good but this is how championships are made by finishing second with a piece of crap. We’re knocking on the door and I won the championship here in 1989 and now it’s 2021 so I don’t think anyone has ever won them 32 years apart.”

“It took a couple laps there at the start to shake the rust off but towards the end we kind of got it going,” Grant Griesbach said after finishing a strong third in his first Slinger visit of the season, “There’s always never enough time when you’re not running first. I thought we had the bad lane on the last restart but it ended up working out and this was the best car I’ve ever drove here so I’m excited for the (Slinger) Nationals next week,”

Last week’s feature winner Ryan DeStefano finished in fourth place while Alex Prunty took the checkered flag in fifth. Rich Loch challenged the leaders in the first half of the race and finished sixth after a spirited battle with Brad Keith who finished seventh. R.J. Braun crossed the finish line in the eighth spot while Nick Egan and Ryan Farrell rounded out the top ten finishers in ninth and tenth respectively.
Rich Loch was the winner of the super late model fast dash and Luke Fenhaus was the fastest qualifier for the evening after he toured the speedway in 11.191 seconds.

Andrew Meyerhofer and Brian Holtz battled hard for the victory in the 35-lap sportsman feature before Meyerhofer was able to edge ahead at the checkered flag to score the win. Meyerhofer’s last lap pass for the feature win also netted him a $250 bonus from sponsor Kool Trikes. Holtz paced the field for most of the race but had to settle for second while Paul Wagner finished third. Dale Lecus Jr finished fourth and Bobby Gutknecht was fifth. Dan Calhoun and Brian Holtz each won a sportsman heat race and Jake Schraufnagel was the fastest qualifier with a lap at 12.639 seconds.

Michael Rose charged to the lead late in the 25-lap American Super Cup feature and captured the victory over Landon Hocking and David Cerar. Matt Rose finished fourth and Rob Baaske was fifth. Tony Rendina and Landon Hocking were the winner of the American Super Cup heat races and Michael Rose was the fastest driver in qualifying after turning in a lap at 14.704 seconds.
Blake Thelen won the Speedway Guest Car race and Ryan Lovald was the winner of the Figure 8 race that featured in intersection connection between Bill Shavlik and Shane Becker. 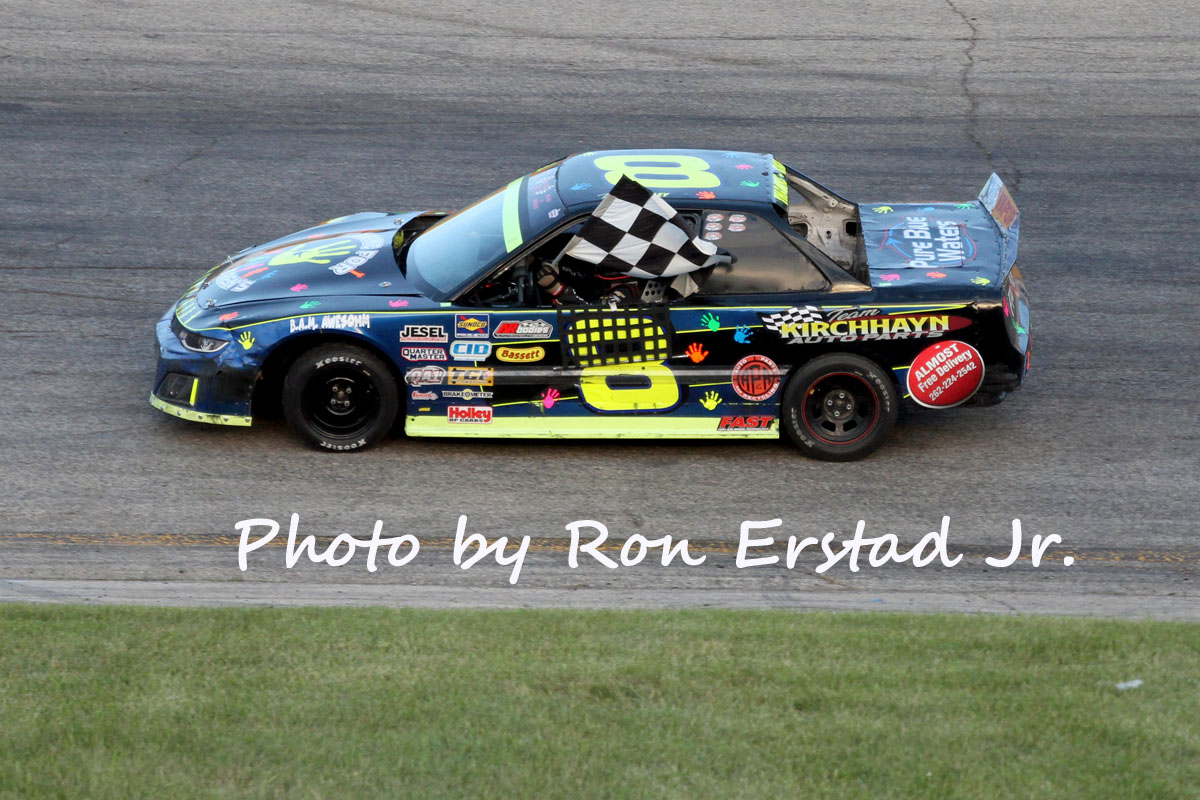 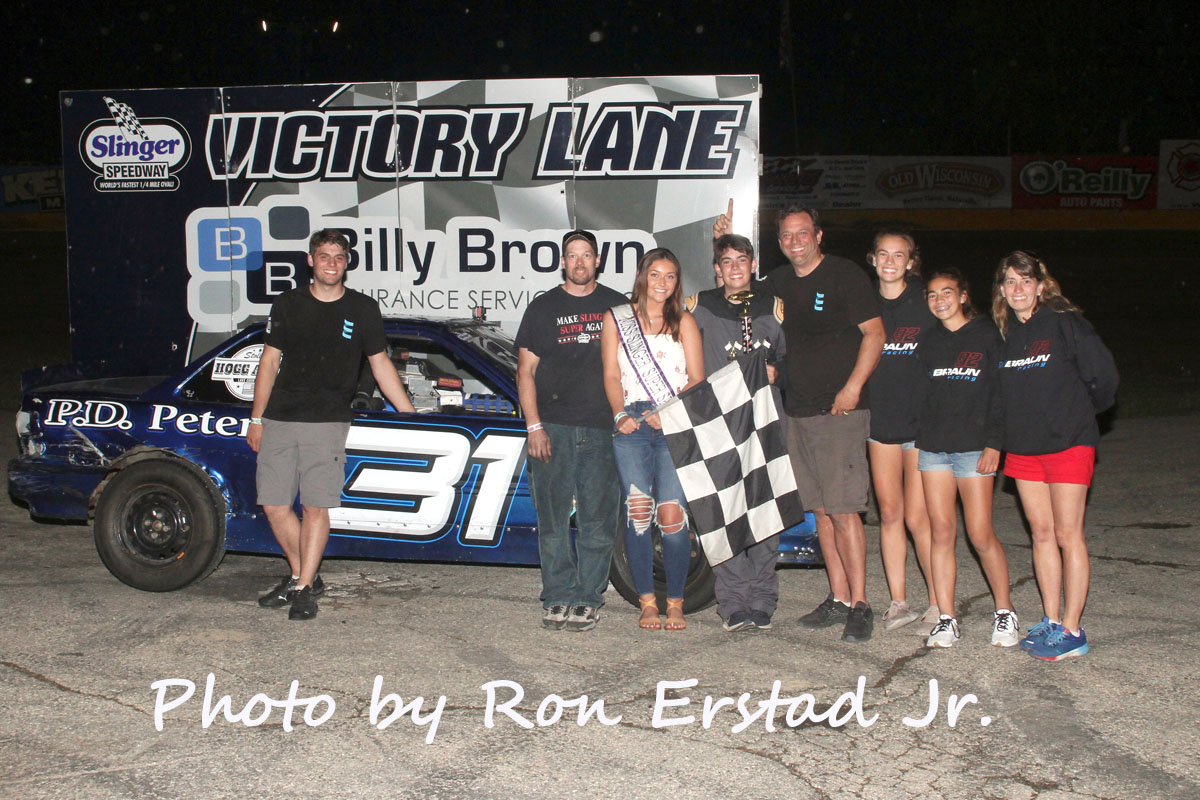 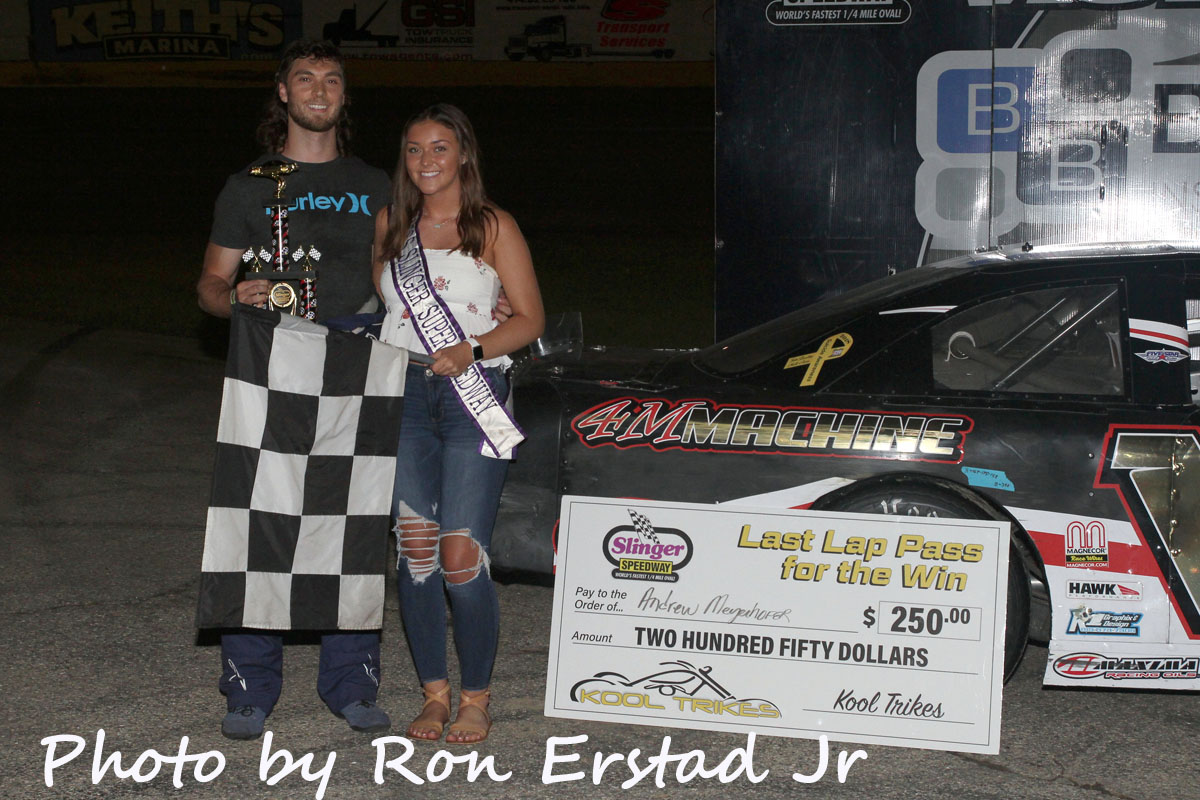 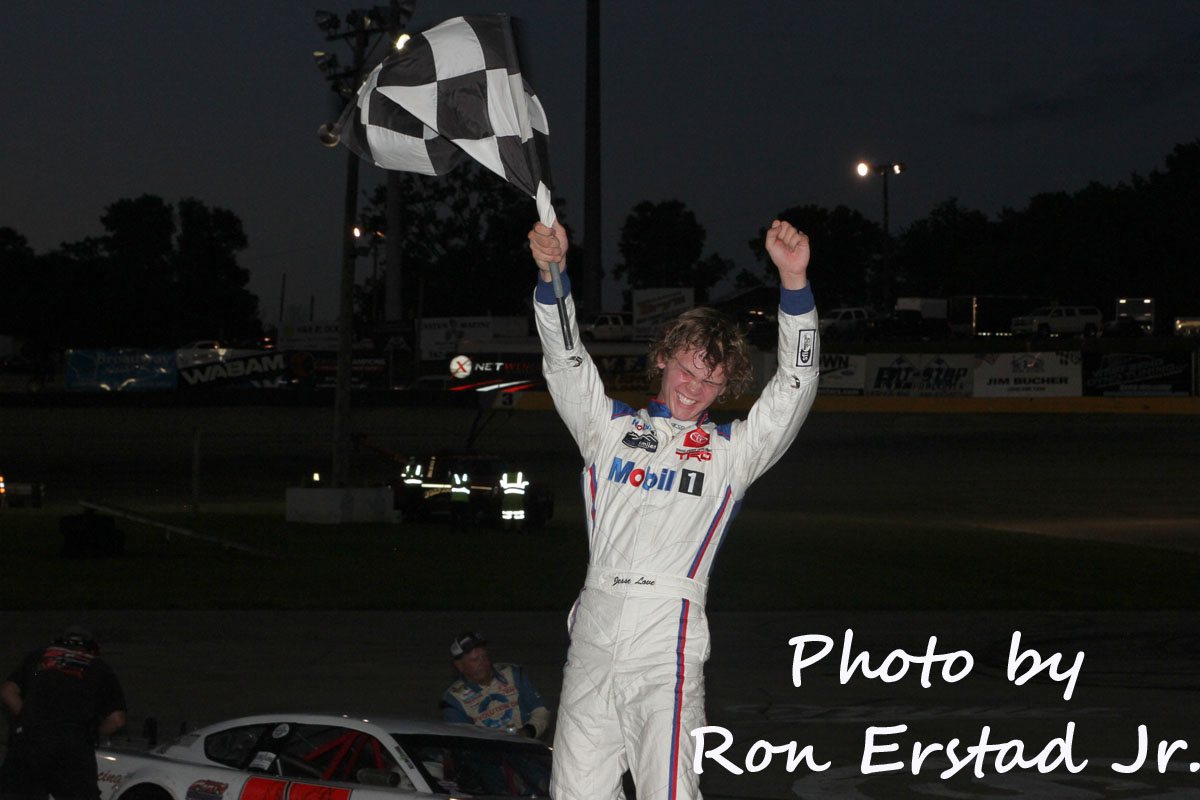 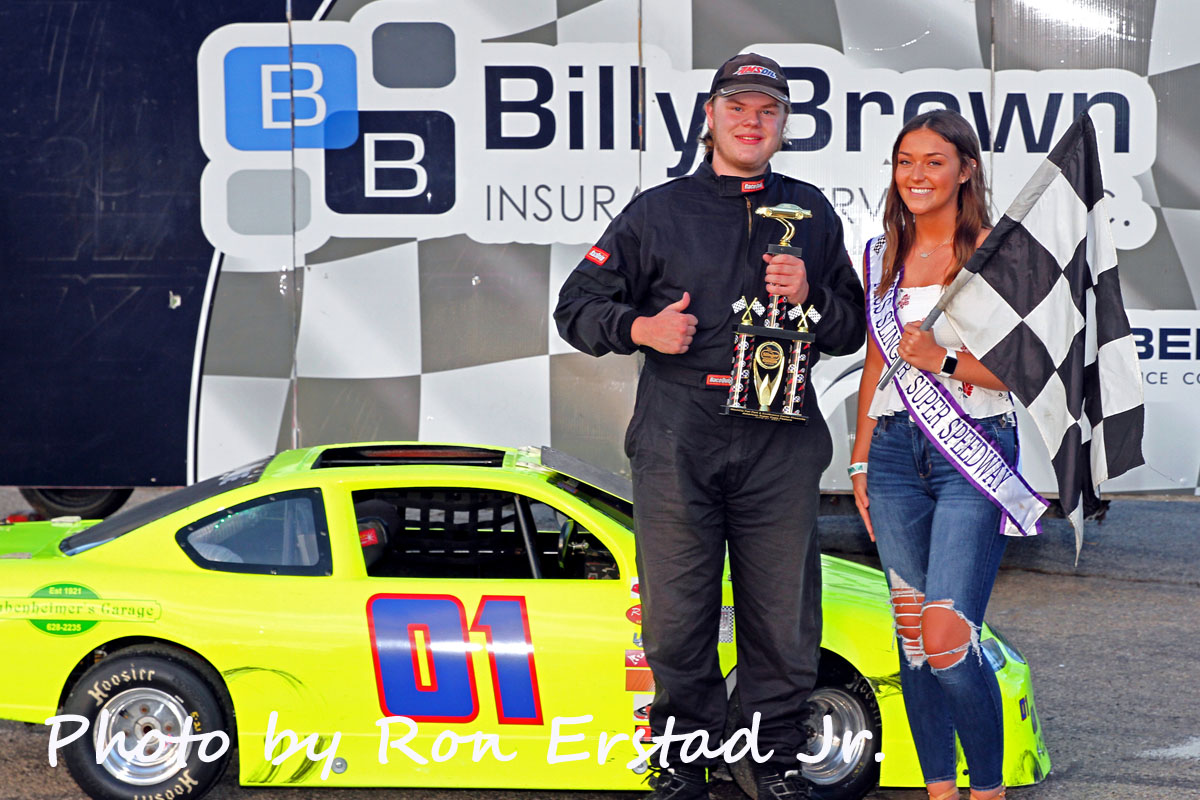 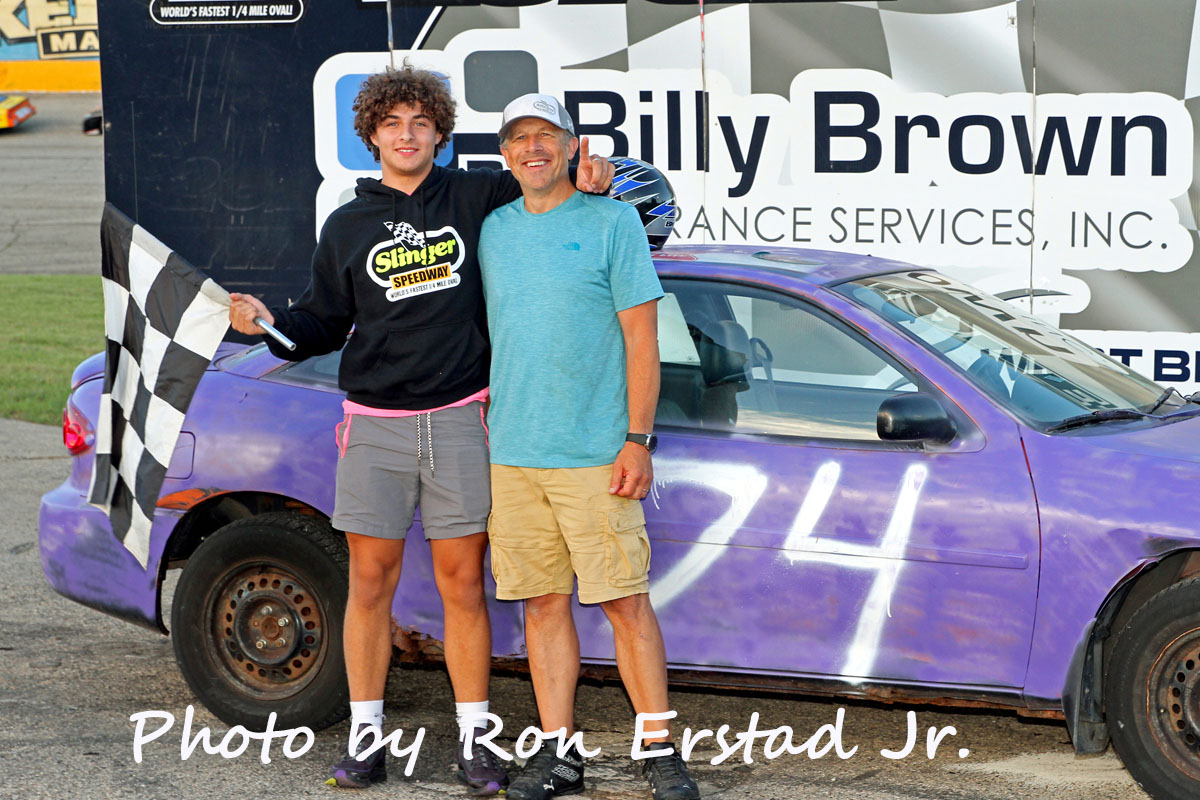 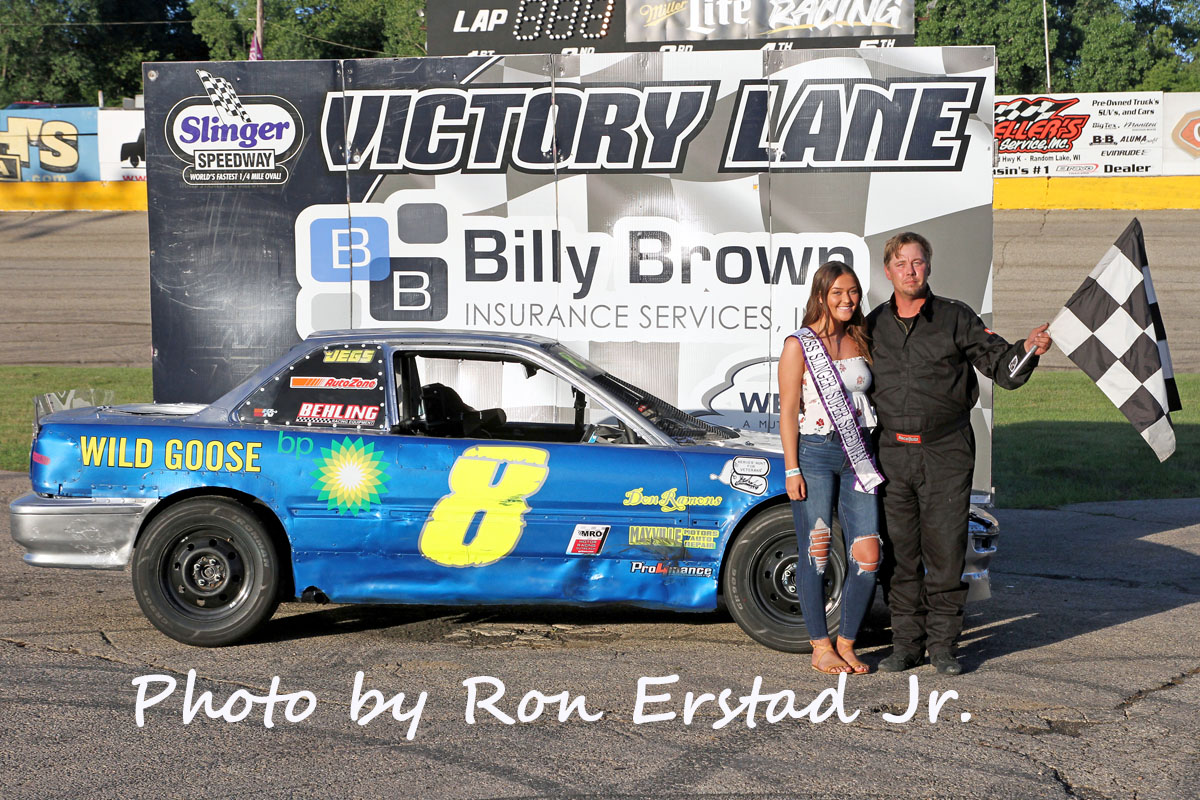 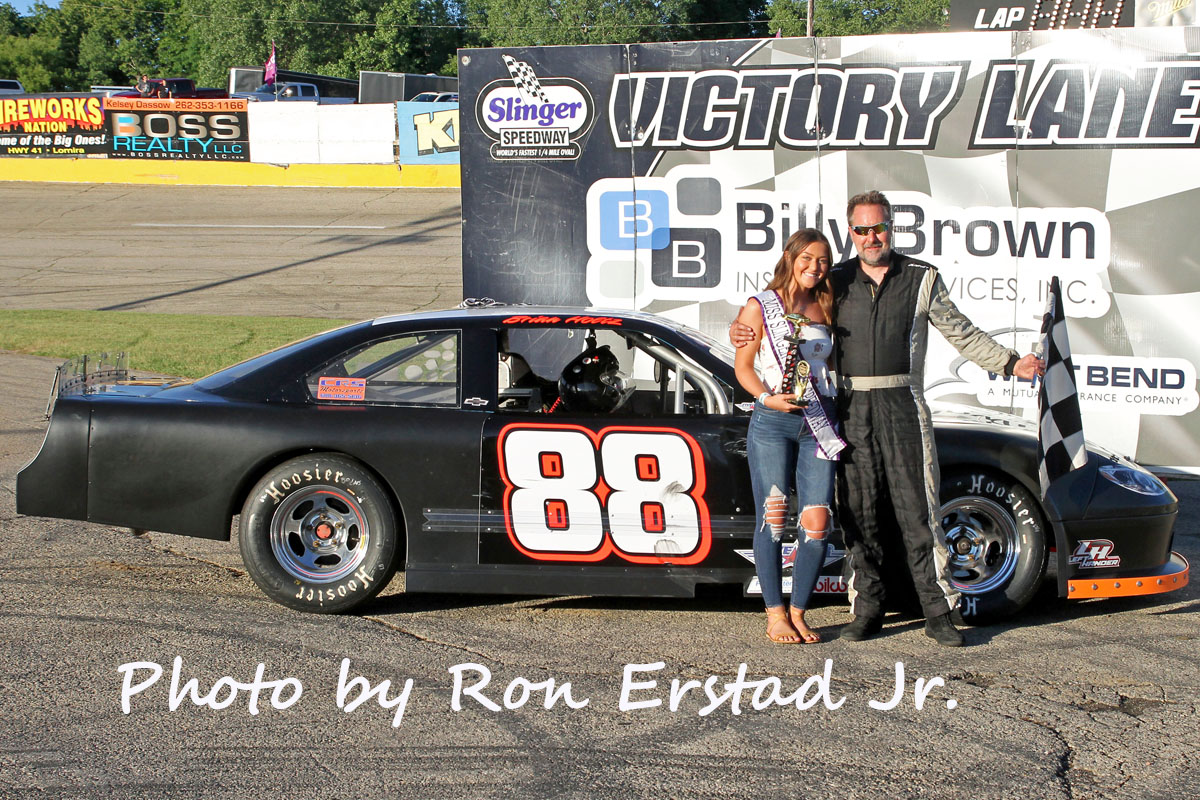 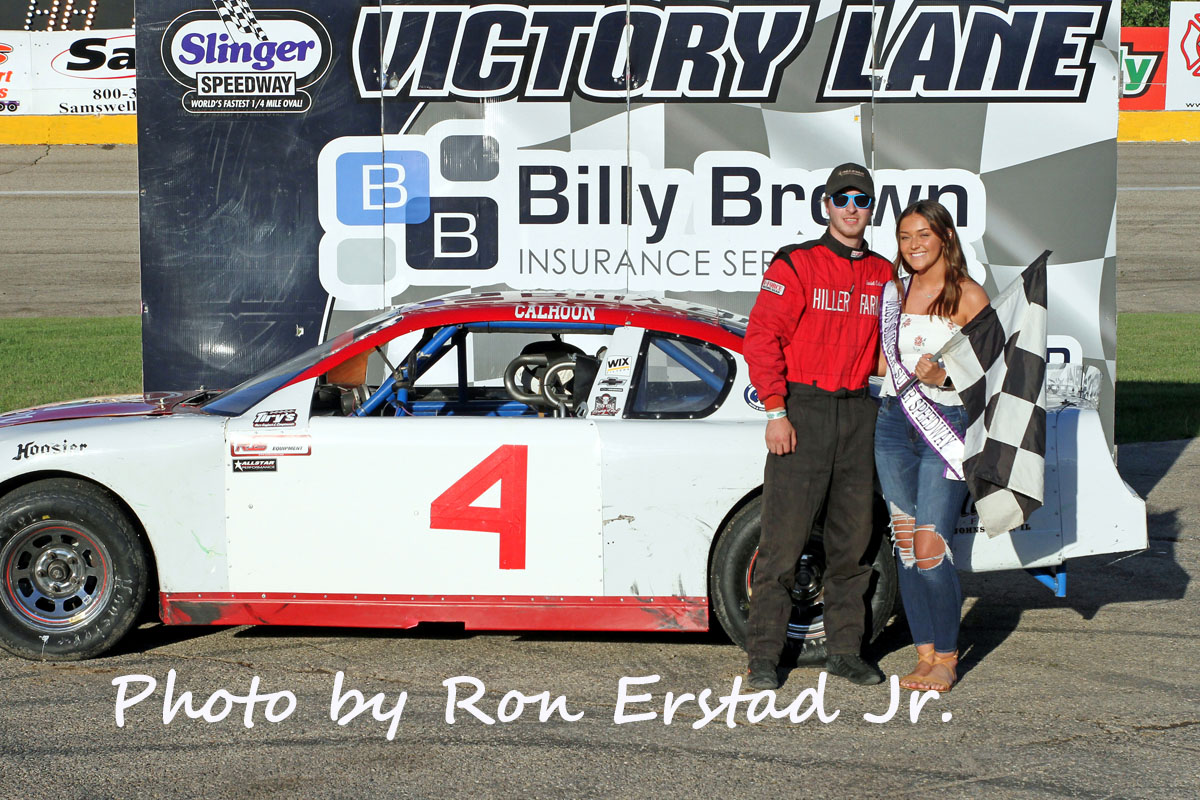 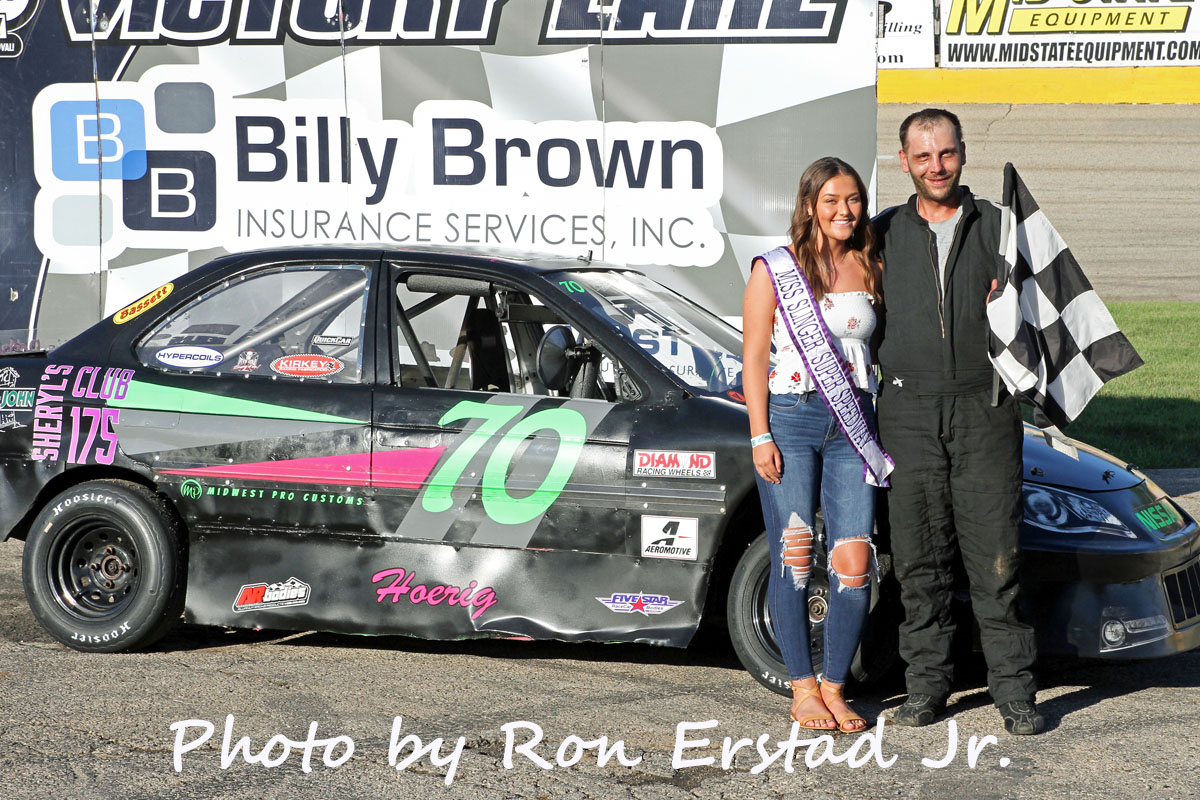 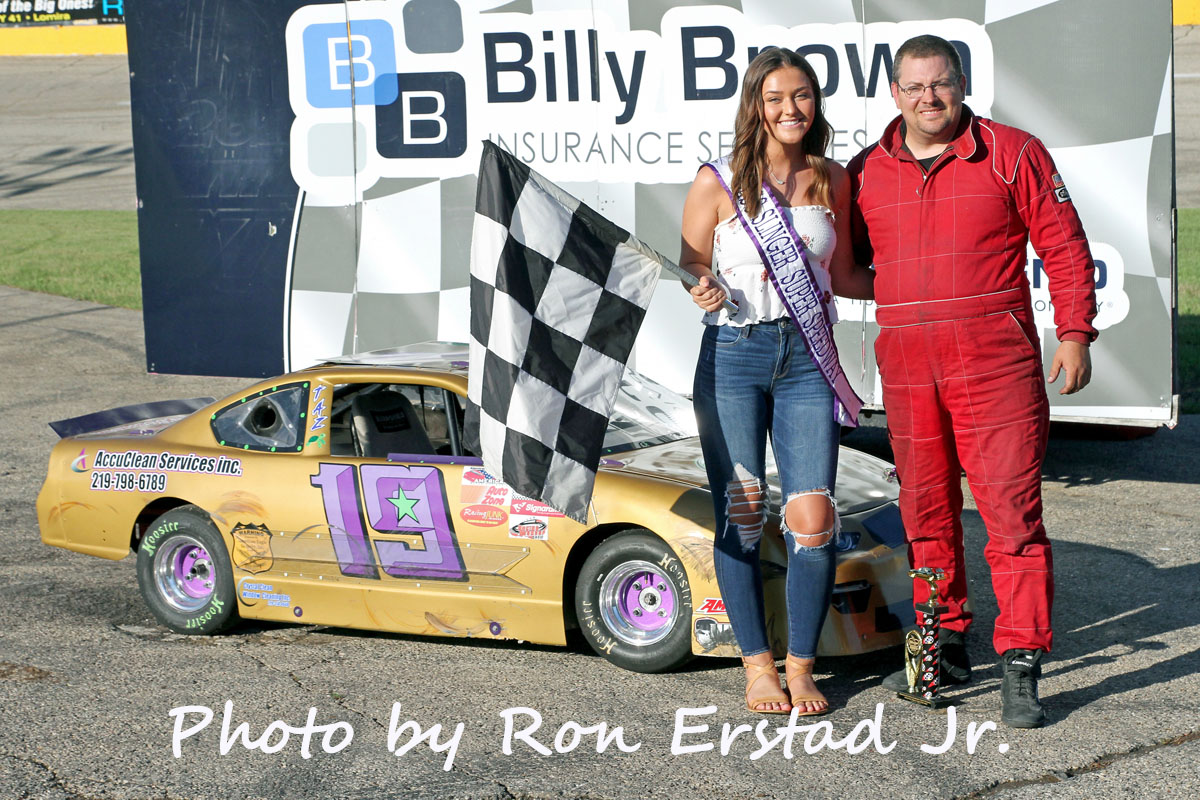 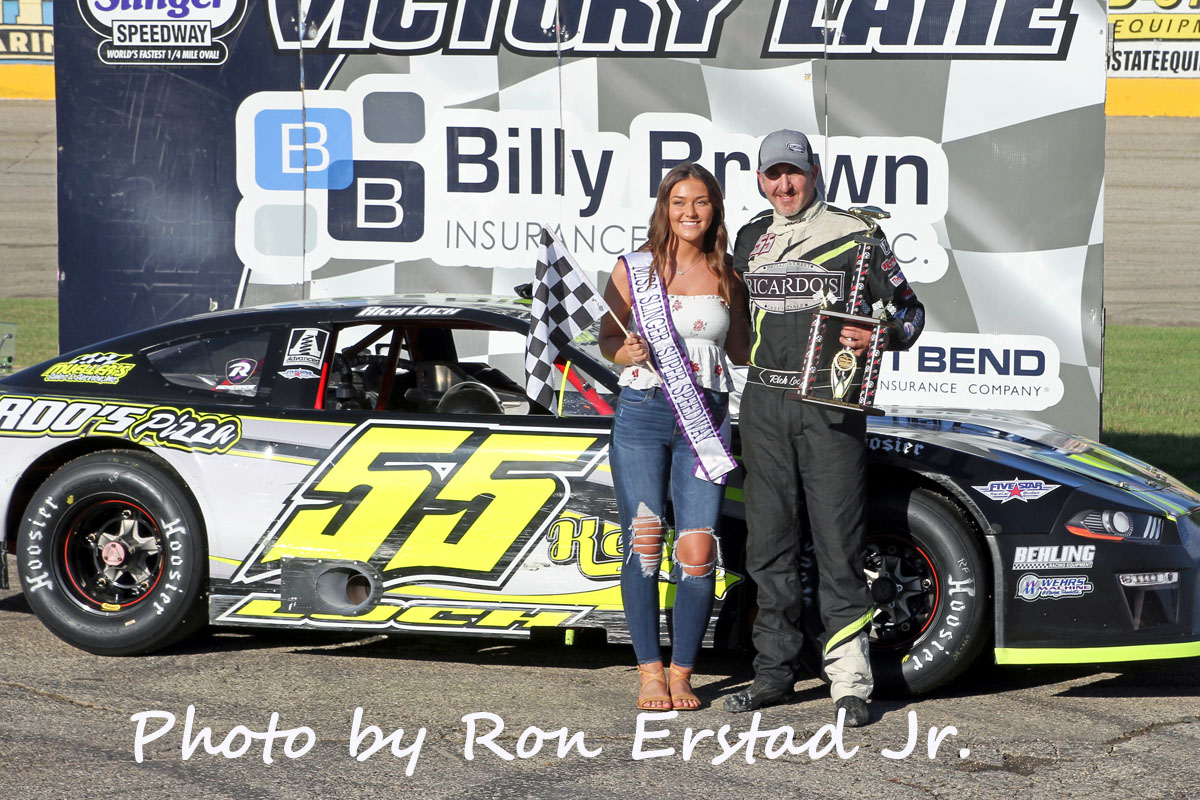 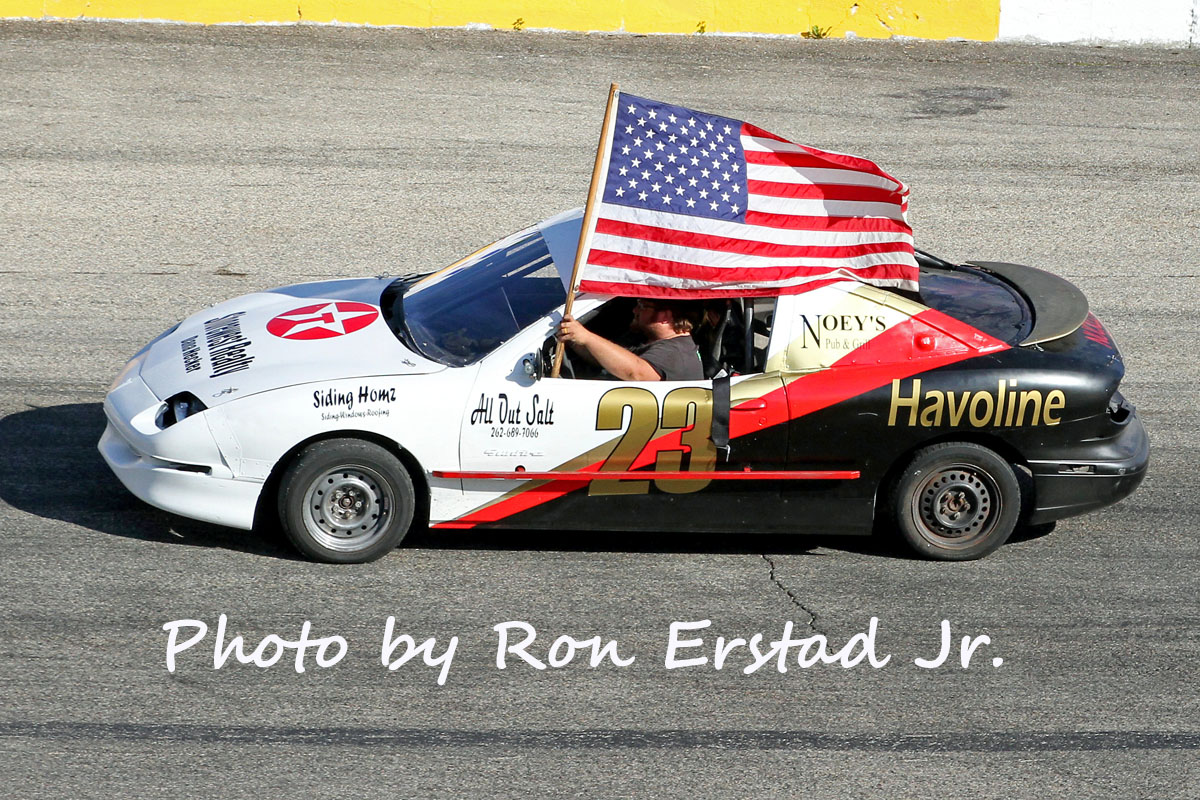 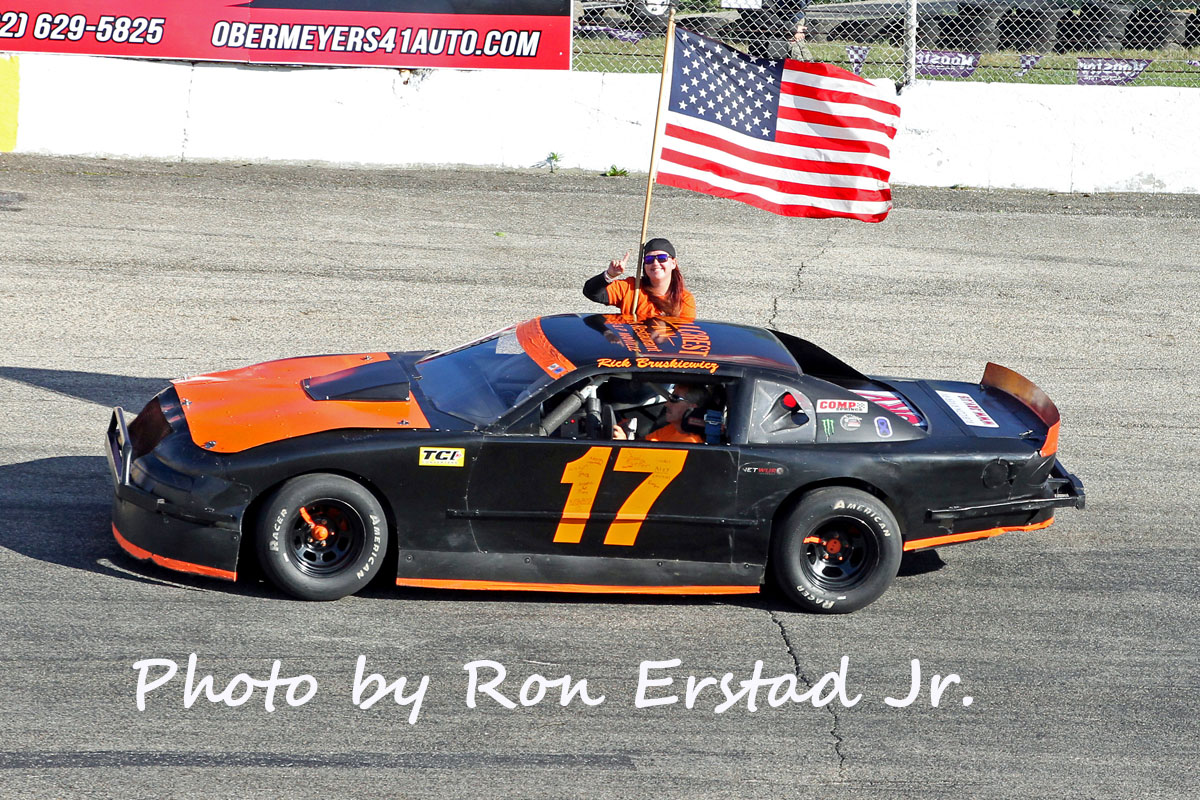 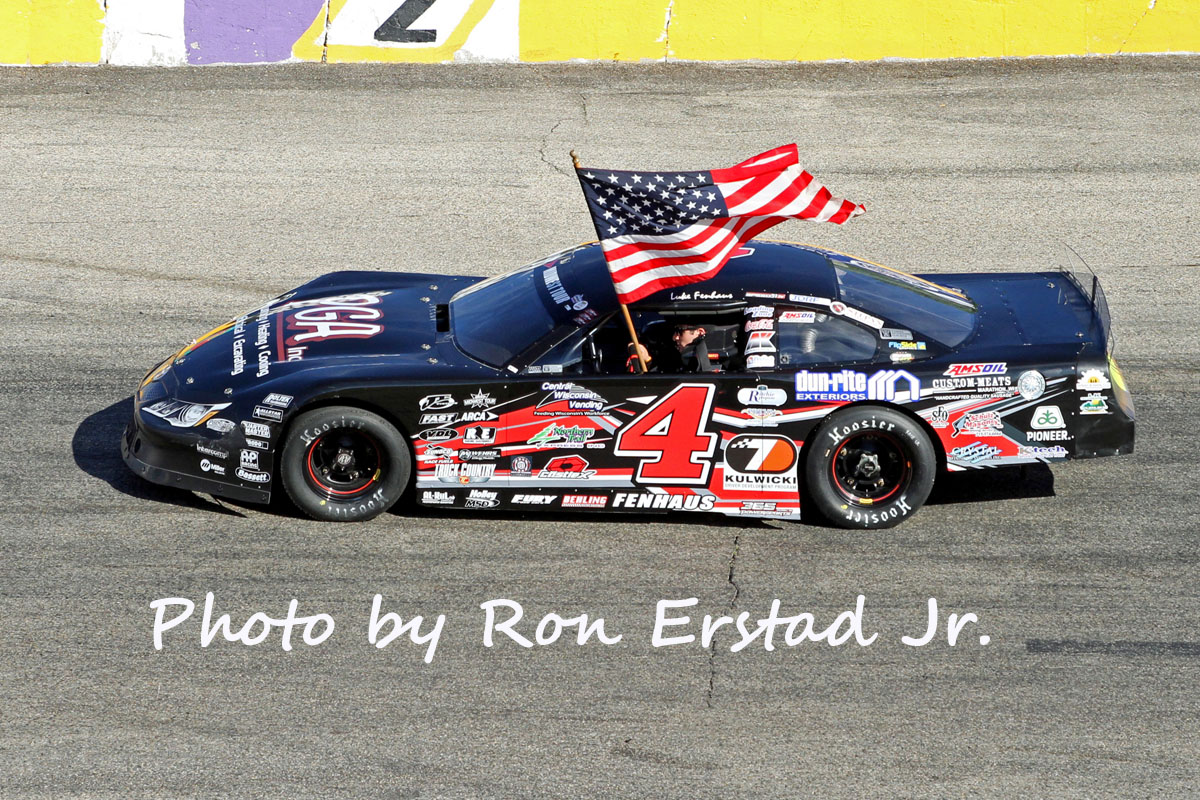 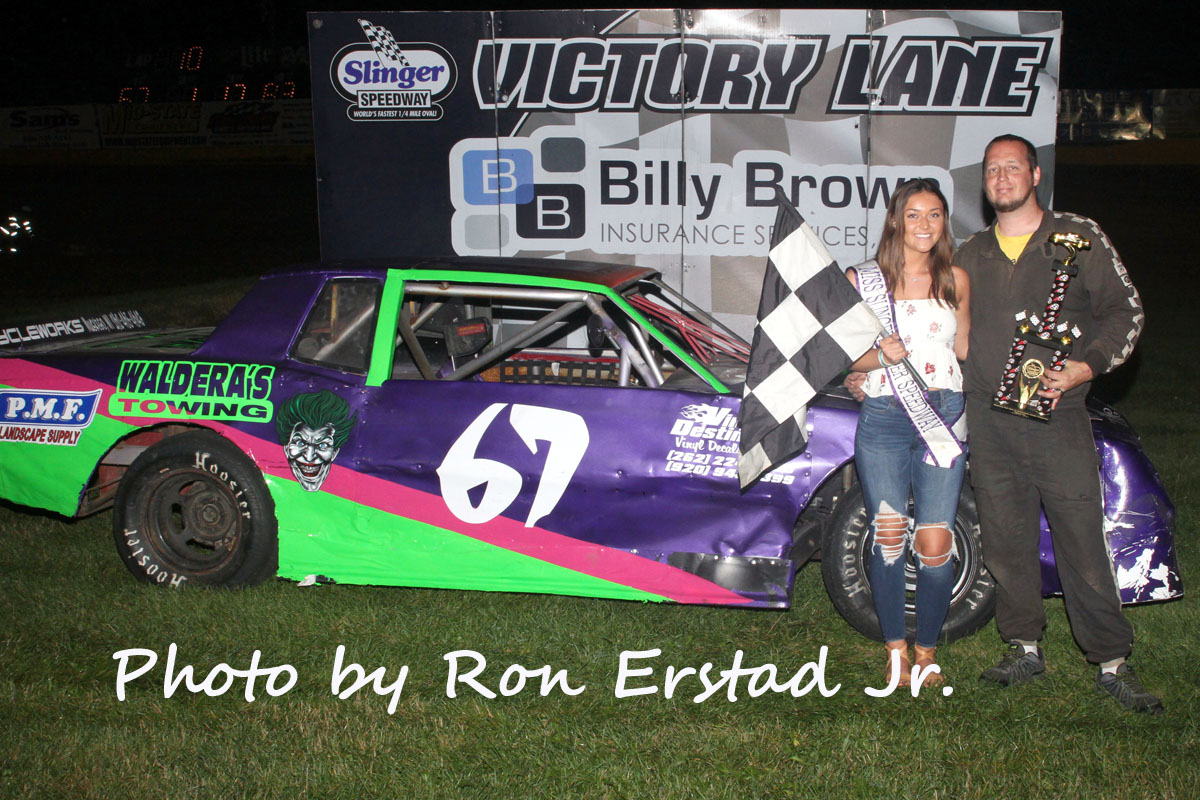