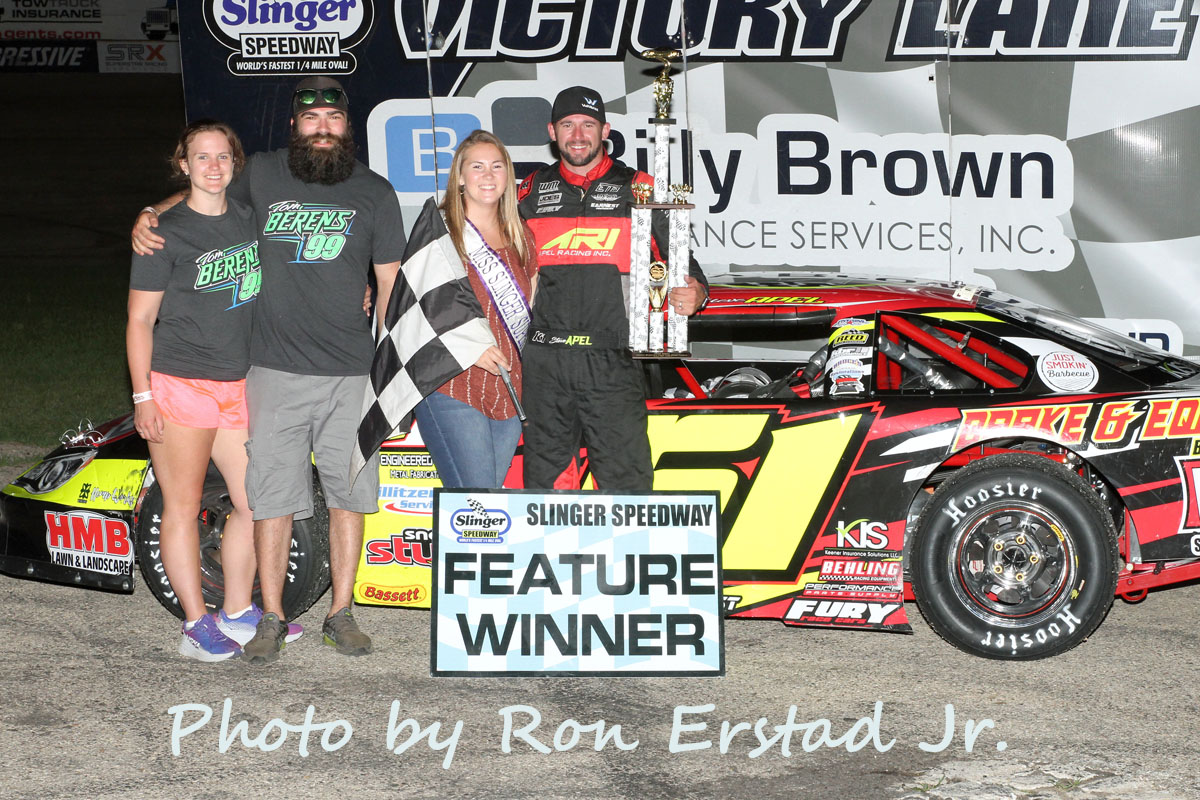 By Dan Margetta
Slinger, Wis., July 25—Defending super late model track champion Steve Apel hasn’t had much go his way this season but he found himself in the right place at the right time Sunday night at the Slinger Speedway as he won the 75-lap main event after Luke Fenhaus and R.J. Braun tangled late in the event while battling for the lead.

R.J. Braun took the top spot from Rich Loch just past the halfway mark while Luke Fenhaus sliced his way through the field into second as the two established themselves as the class of the field in the waning laps. Fenhaus was strong on the very bottom of the speedway while Braun ran a whisker higher and each time was able to maintain enough momentum to close the door on the attempts Fenhaus launched for the lead. With six laps to go, Fenhaus made another inside stab at the lead entering turn three and was able to place his nose just inside Braun’s rear bumper. As Braun defended the position, contact between the cars sent Braun’s car sliding sideways where the left front slammed hard into Fenhaus’ right front, damaging both cars and drawing a caution flag.

The incident between the leaders fared well for Rich Loch and Steve Apel who were battling intensely for third and now found themselves in the top two spots in a six-lap shoot-out for the win. Loch chose the outside groove for the restart and the choice proved costly when racing resumed as Apel was able to pull ahead slightly on the inside and then take the lead as Loch ran out of real estate on the outside off turn four. As Apel moved into the lead, Alex Prunty was able to also use the inside lane to pass Loch for second. Apel could not be caught in the final laps and he drove to his first super late model feature victory of the season as Alex Prunty finished second just ahead of Loch in third.

“Rich (Loch) and I were battling for third like it was the win before the 4 (Fenhaus) and 92 (Braun) got together,” Apel stated from victory lane, “But I feel like I stole that one from R.J. (Braun) as that kid’s been working his tail off. That fire is lit and I think today was his day for his first victory but he’ll get there and I have a lot of faith in him. I hate it for him as I really wanted to see him get his first win but we’ll take it.”

“We’ve been struggling this year and I feel like we hit on something on the 92 (teammate Braun’s) car,” Apel continued, “He had a good run at the (Slinger) Nationals and I think we’ve got it figured out. We just need a little bit at the end of the race but it’s really cool to see both cars out of our shop running in the top three each race.”

“Give credit to my crew as we’ve been working like crazy,” Alex Prunty stated finishing second for his best result of the season, “We keep learning every time we get out here and the car’s been getting better and better. All of us were smiling when that caution came out because Steve (Apel) and I were both saving and I’m happy to finally finish where we deserve.”

“We didn’t lead the right laps and it hurts to give one away like that,” Loch said after leading the first half of the race and then coming up short in the late race battle with Apel, “Overall I’m happy with the car as my crew chief is in the ICU and we’re doing everything without him. It stinks to give one away but Steve (Apel) has done that to several people out here. We’ll get one sooner or later as that’s the name of the game here. You have to run consistently up front and then your time will come.”

Steve Apel won the super late model fast dash and Luke Fenhaus topped qualifying once again by turning in a lap in 11.266 seconds.

Ryan Gutknecht won the 40-lap late model feature over Jack Stern and Zach Prunty. 78-year-old Jerry Eckhardt had a marquee night by finishing fourth in the feature and earlier extending his record as the oldest race winner in speedway history by capturing the heat race victory. Tyler Hromadka finished fifth. Jack Stern was the fastest qualifier after posting a lap time of 12.112 seconds.
Jake Schraufnagel won the 30-lap sportsman feature by beating Andrew Meyerhofer and Dan Calhoun to the checkered flag. Dale Lecus Jr. finished fourth and Paul Wagner was fifth. Schraufnagel also won the sportsman heat race while Andrew Meyerhofer denied Schraufnagel a clean sweep as he turned in a lap at 12.864 to become the division’s fastest qualifier.

Nick Schmidt edged Zach Greer to win the 25-lap Super Beez feature while Brandon Tackes finished third. Colin Saegert took the checkered flag in fourth place while Derek Hoerig rounded out the top five in fifth. Al Strobel and Zach Greer each were winners of a Super Beez heat race and Zach Greer was the fastest qualifier with a lap time of 13.649 seconds.

Carl Benn won the 25-lap Slinger bees feature by holding off Brandon Mennicke and Misty Benn for the victory. Al Strobel crossed the finish line in fourth place and Ricky Gebhard finished fifth. The Slinger bees heat races were won by Brady Held and Ricky Gebhard while fast qualifier honors went to Marty Tackes was a lap time of 15.221 seconds.

Nick Ostberg brought the evening to a close just after 9:30 pm with a victory in the Figure 8 race over Bill Shavlik and Scott Goetzke. 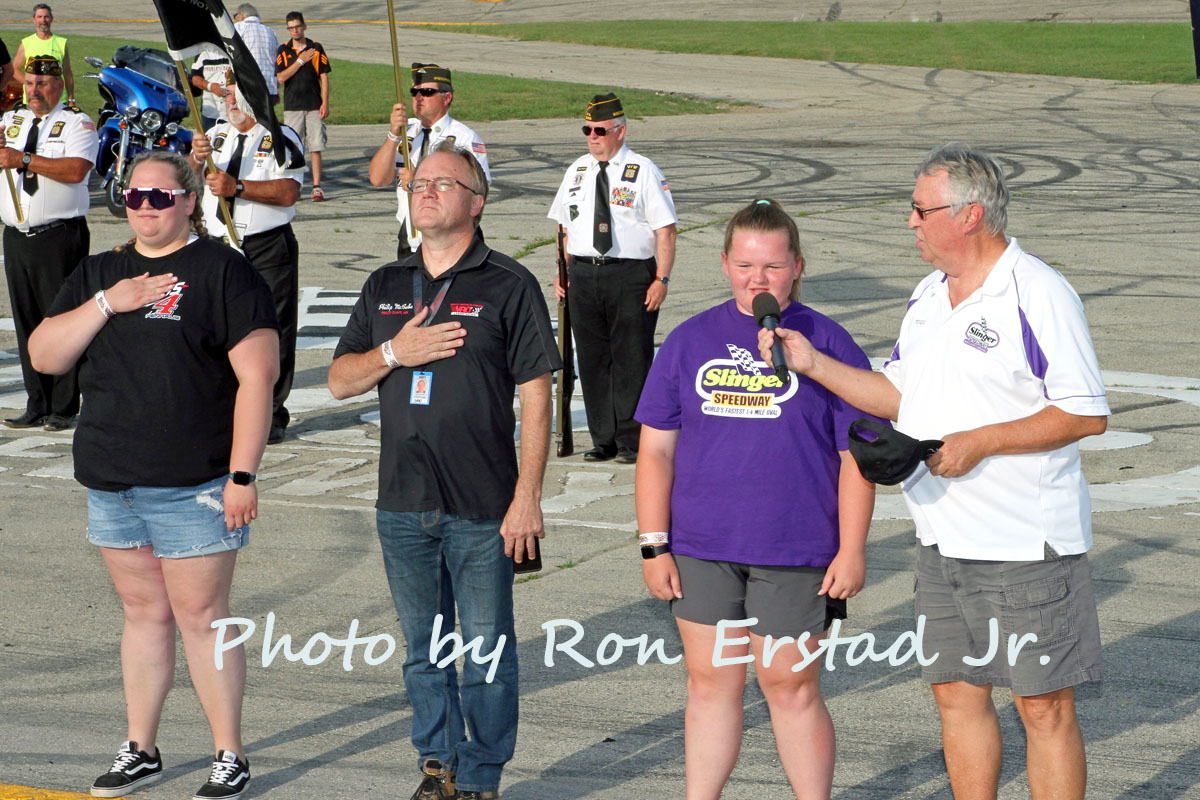 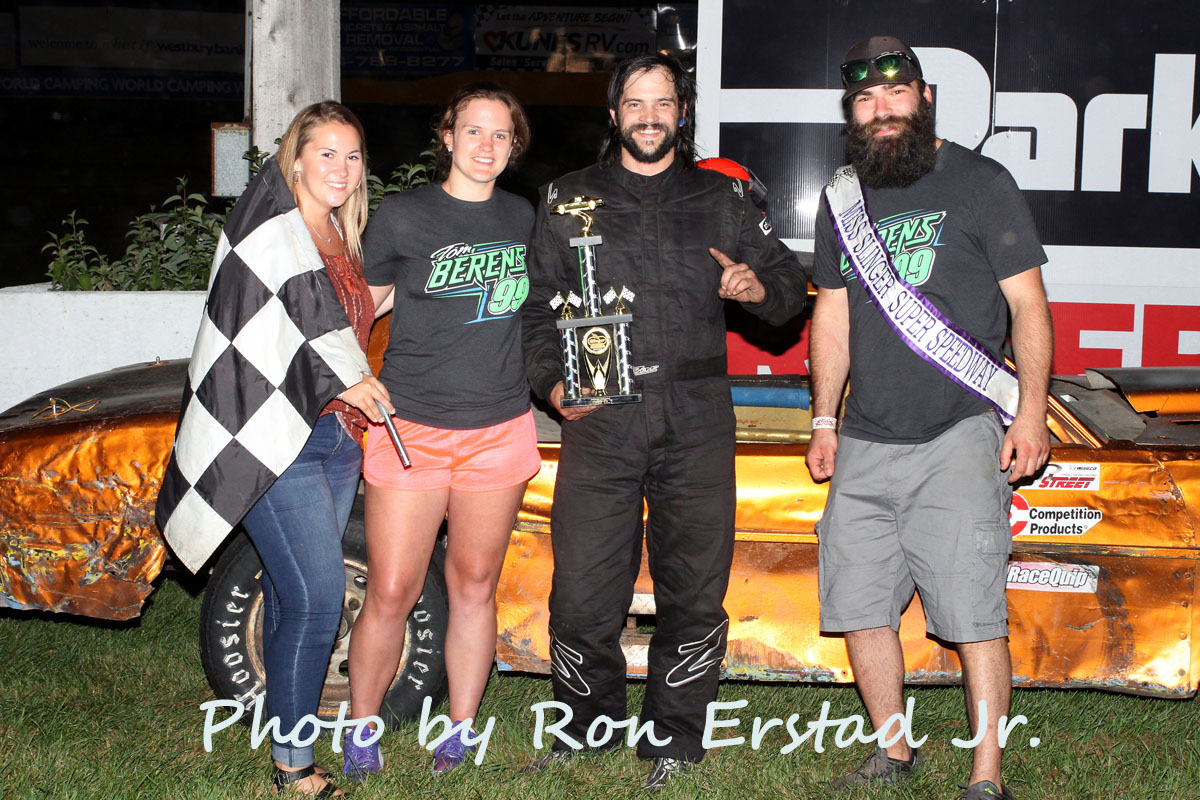 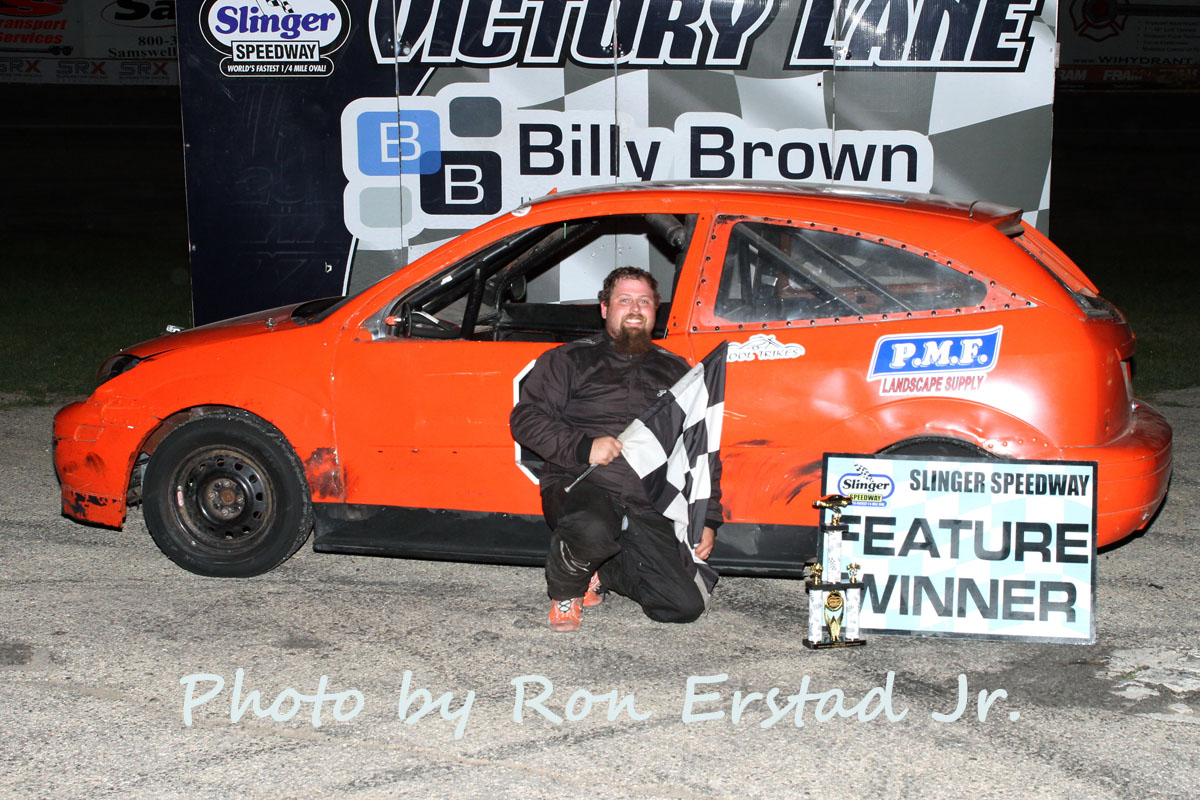 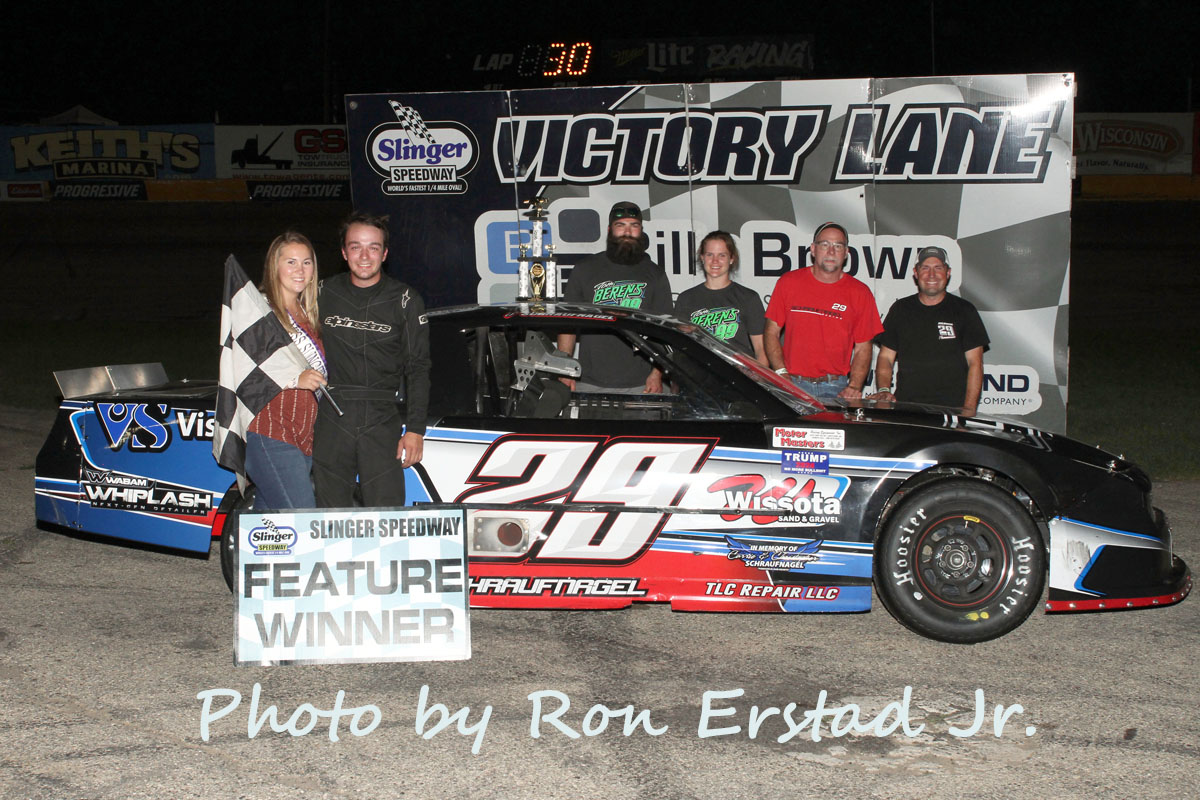 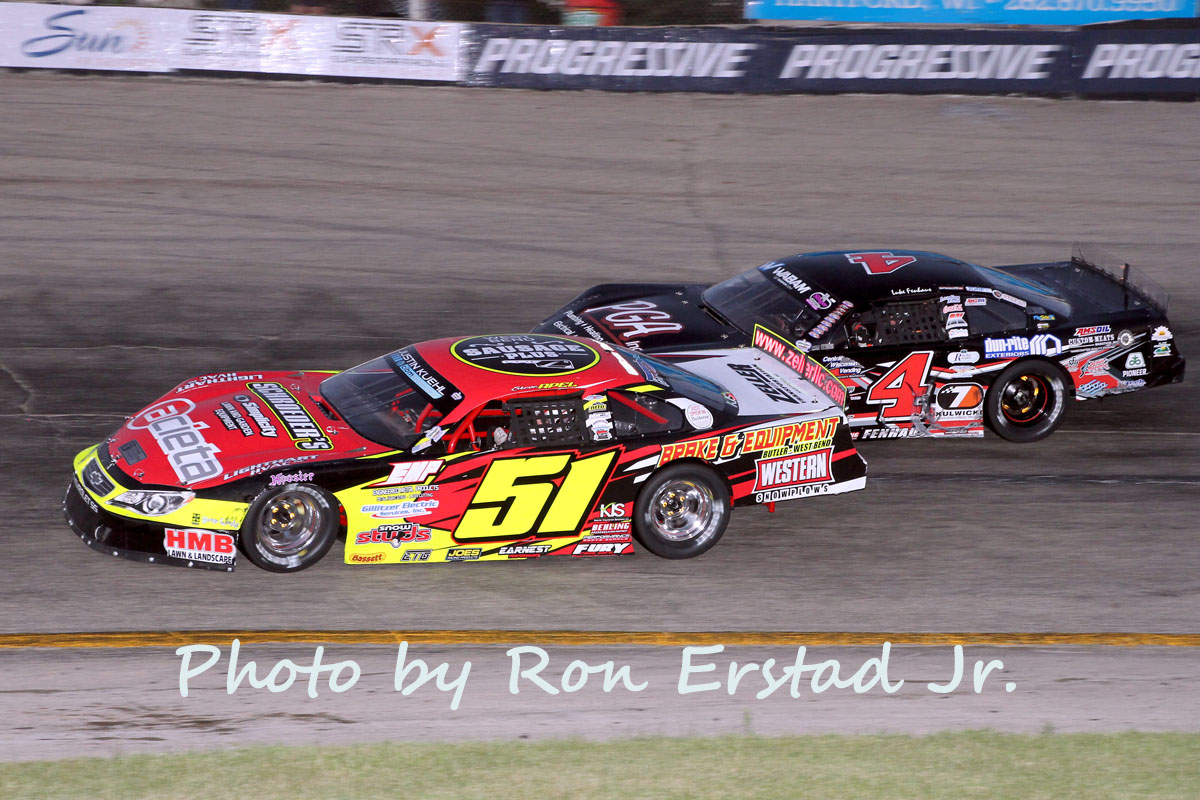 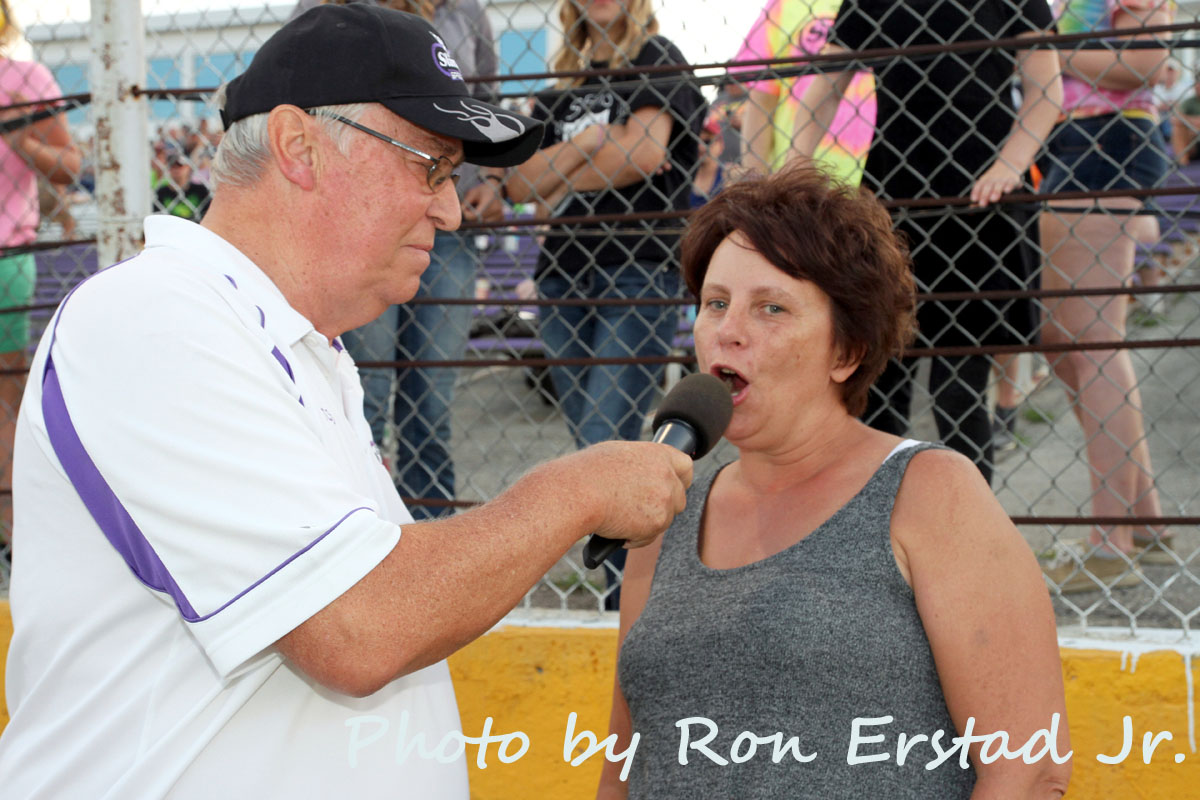 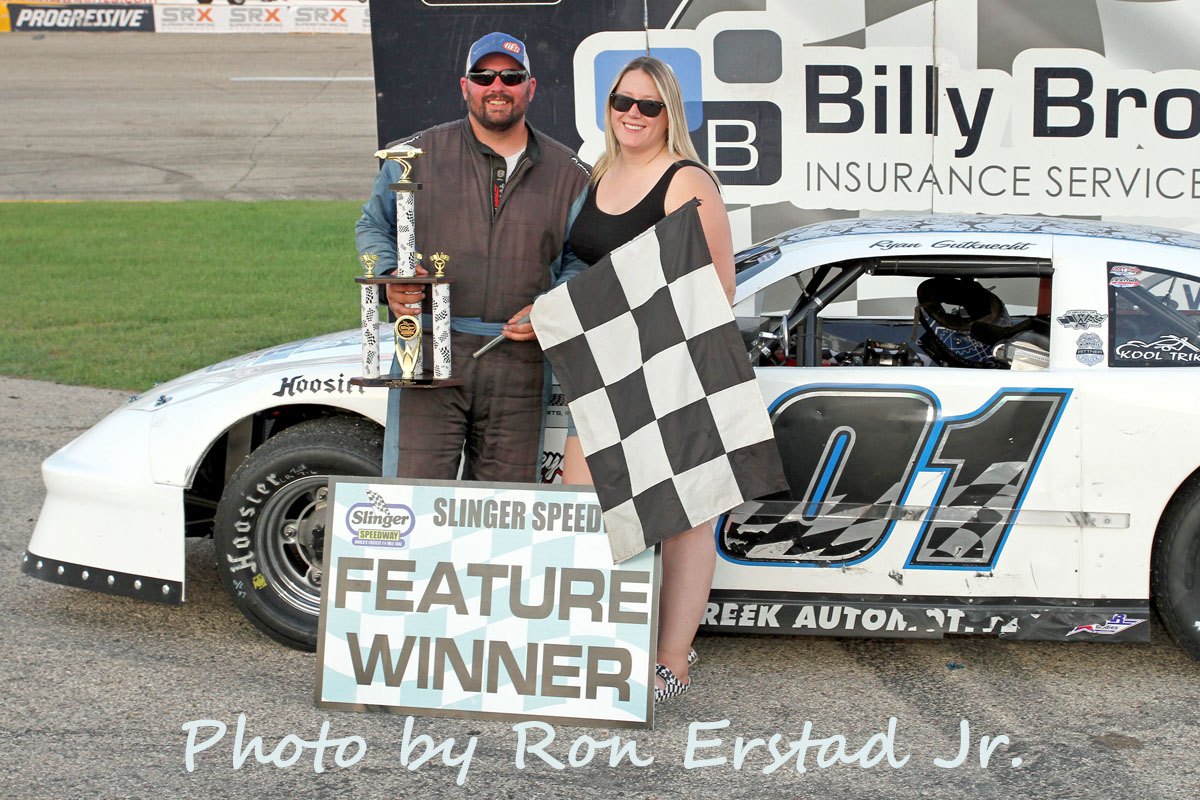 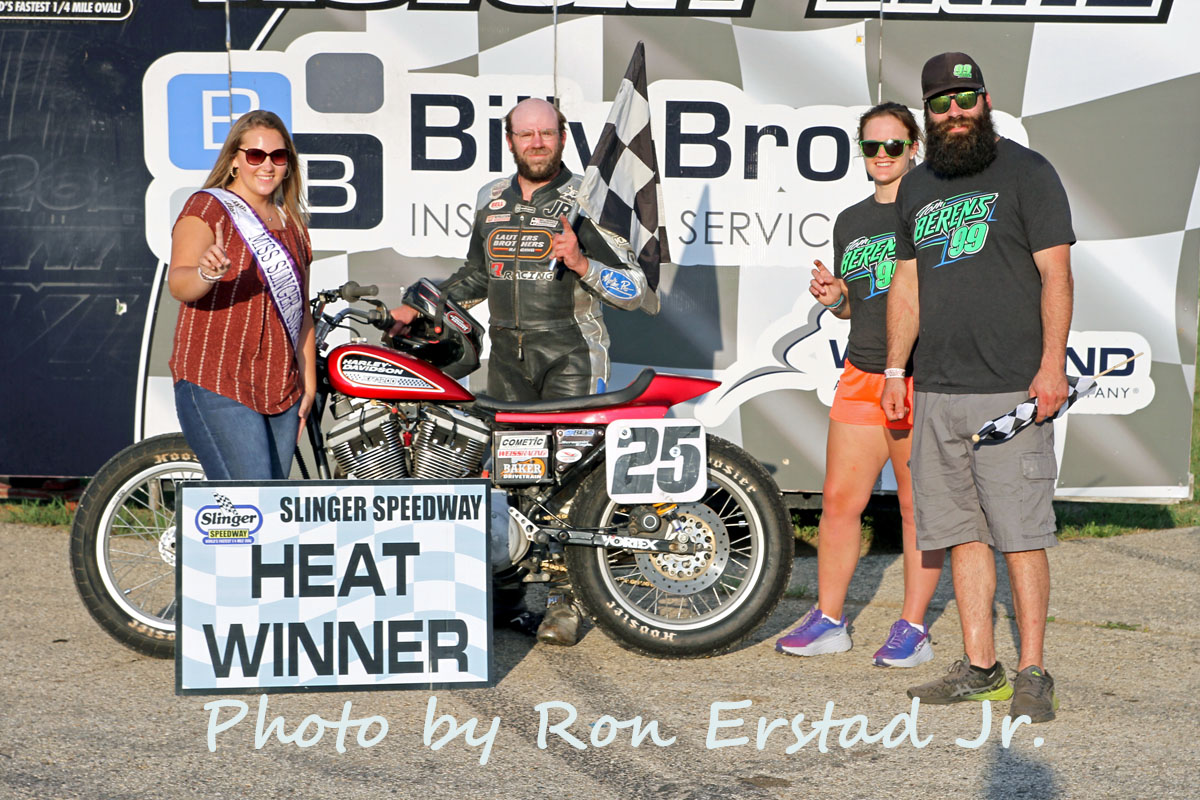 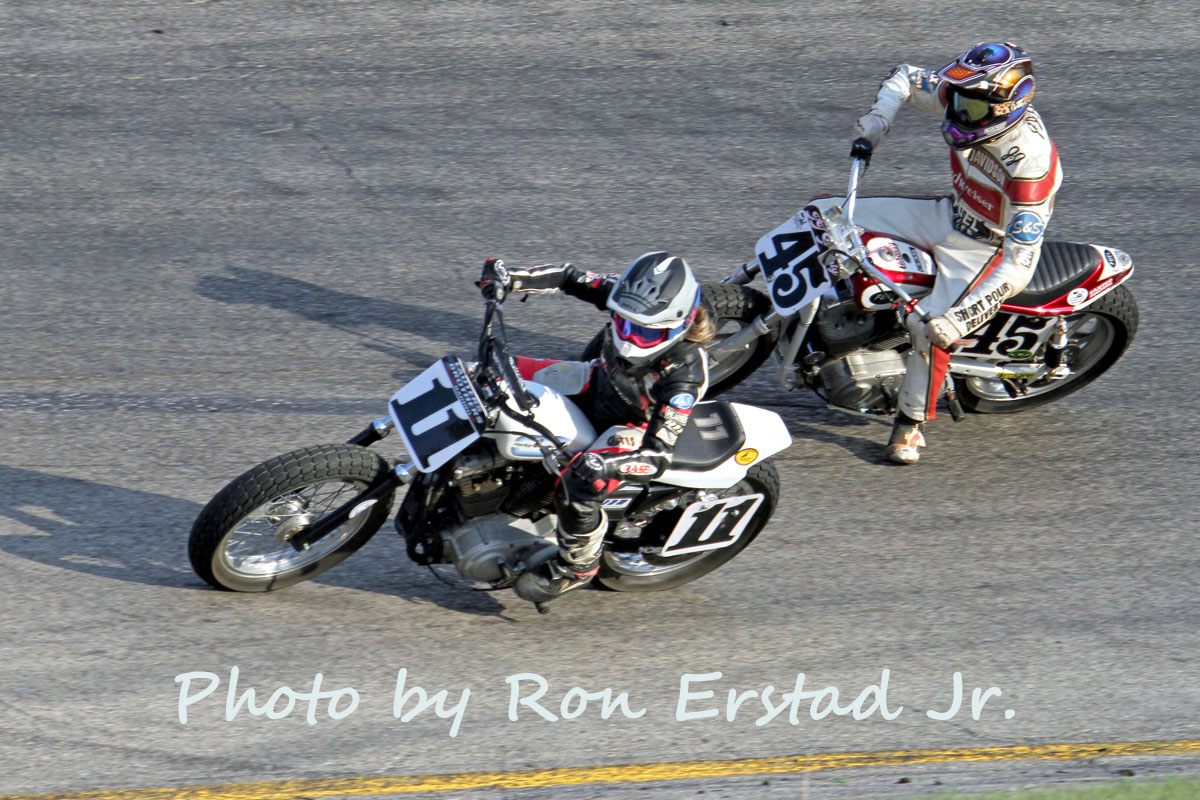 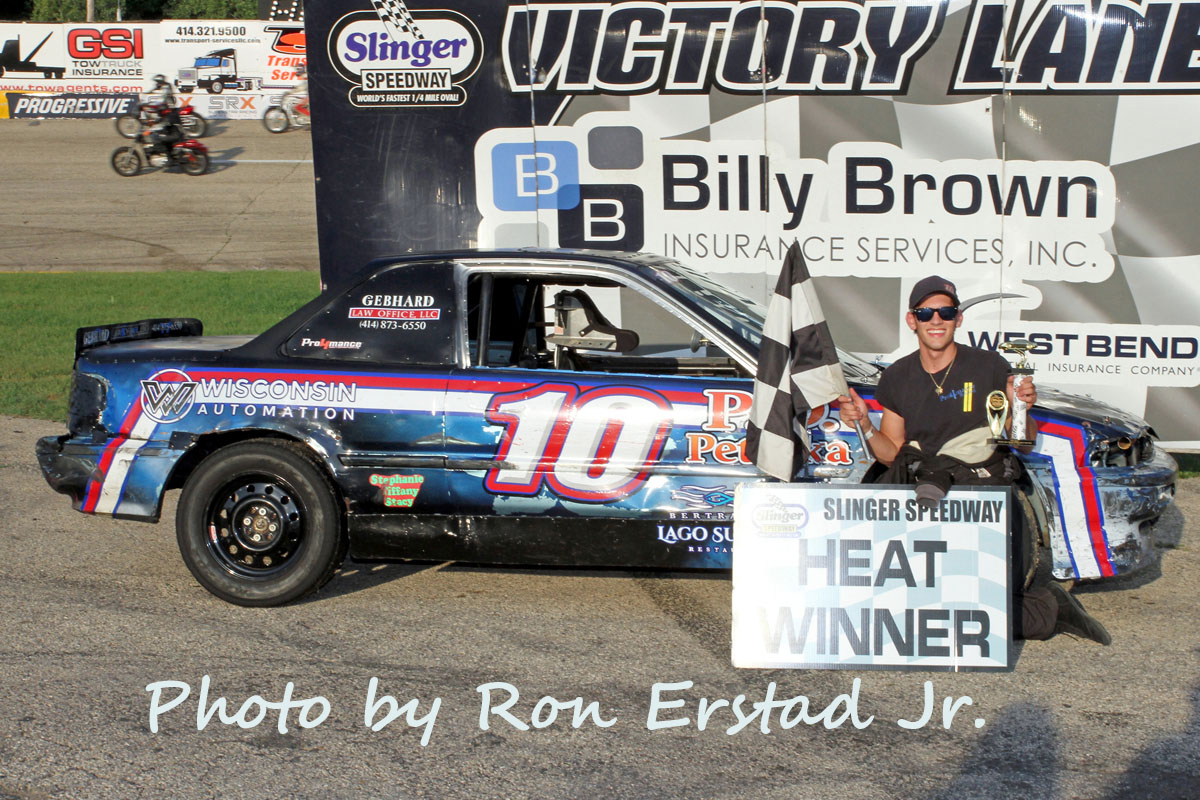 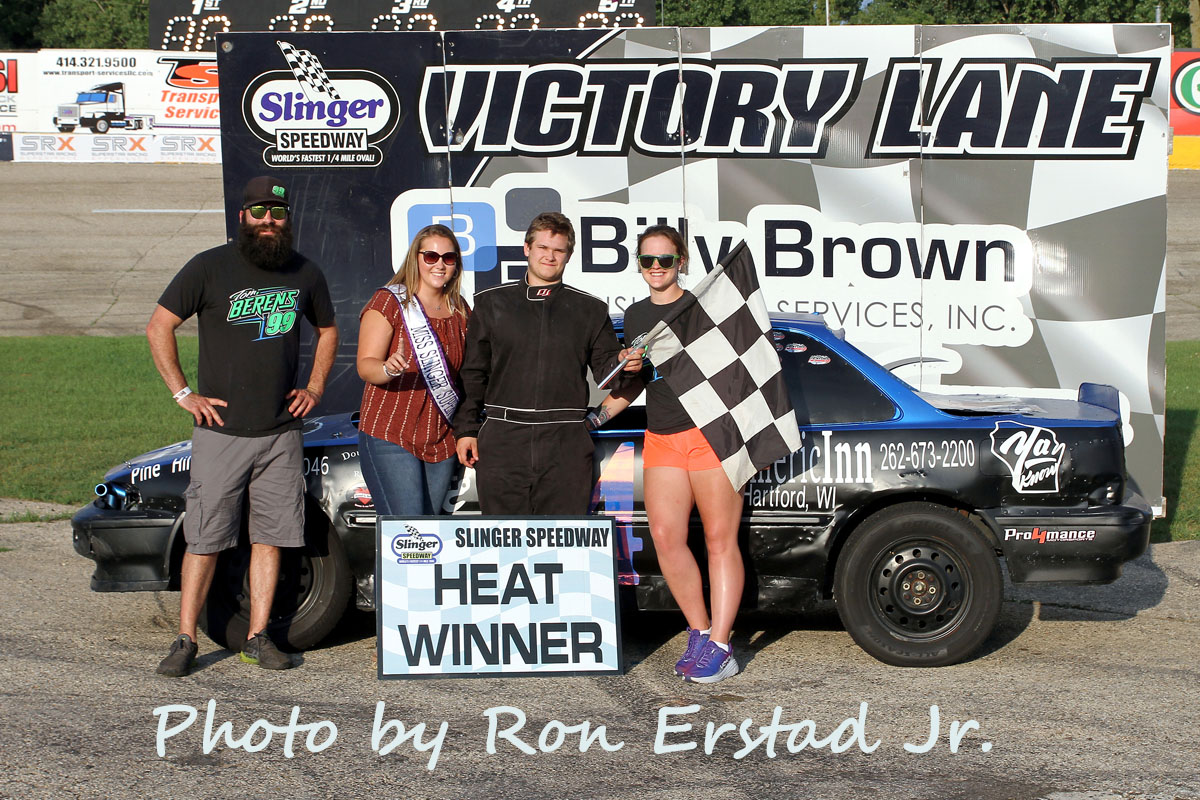 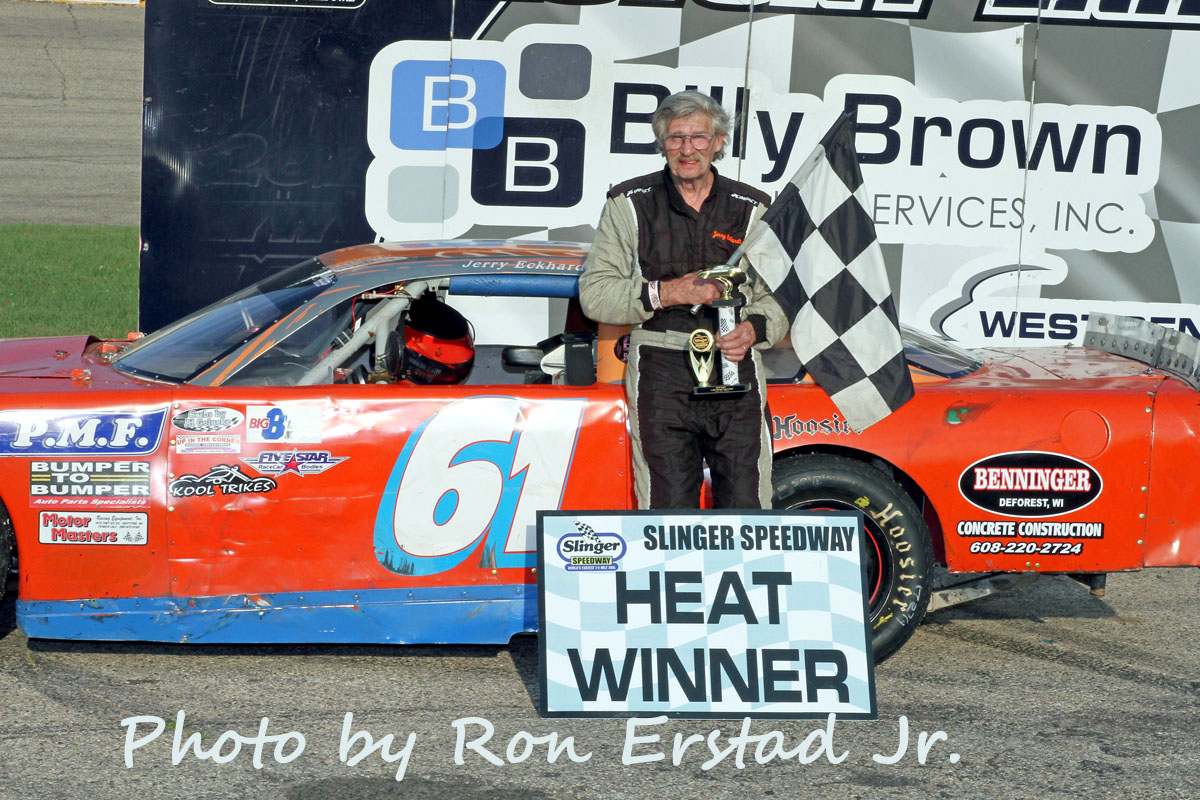 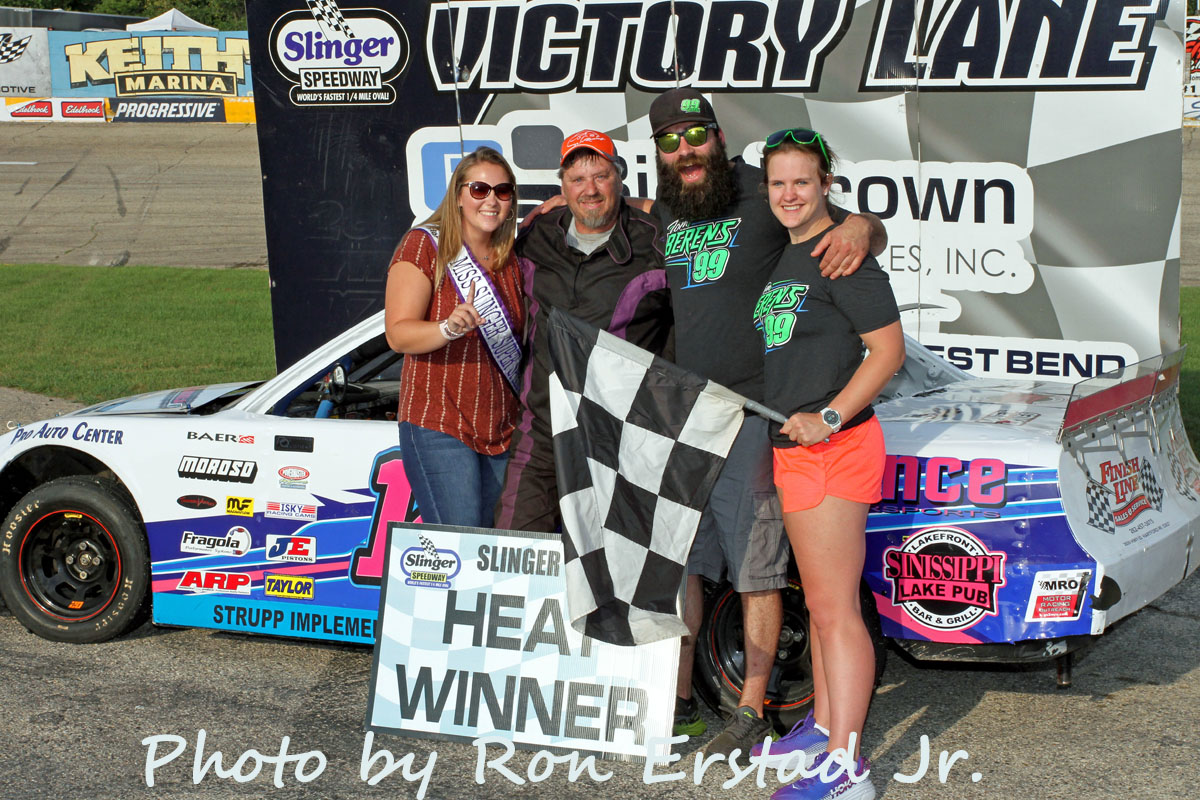 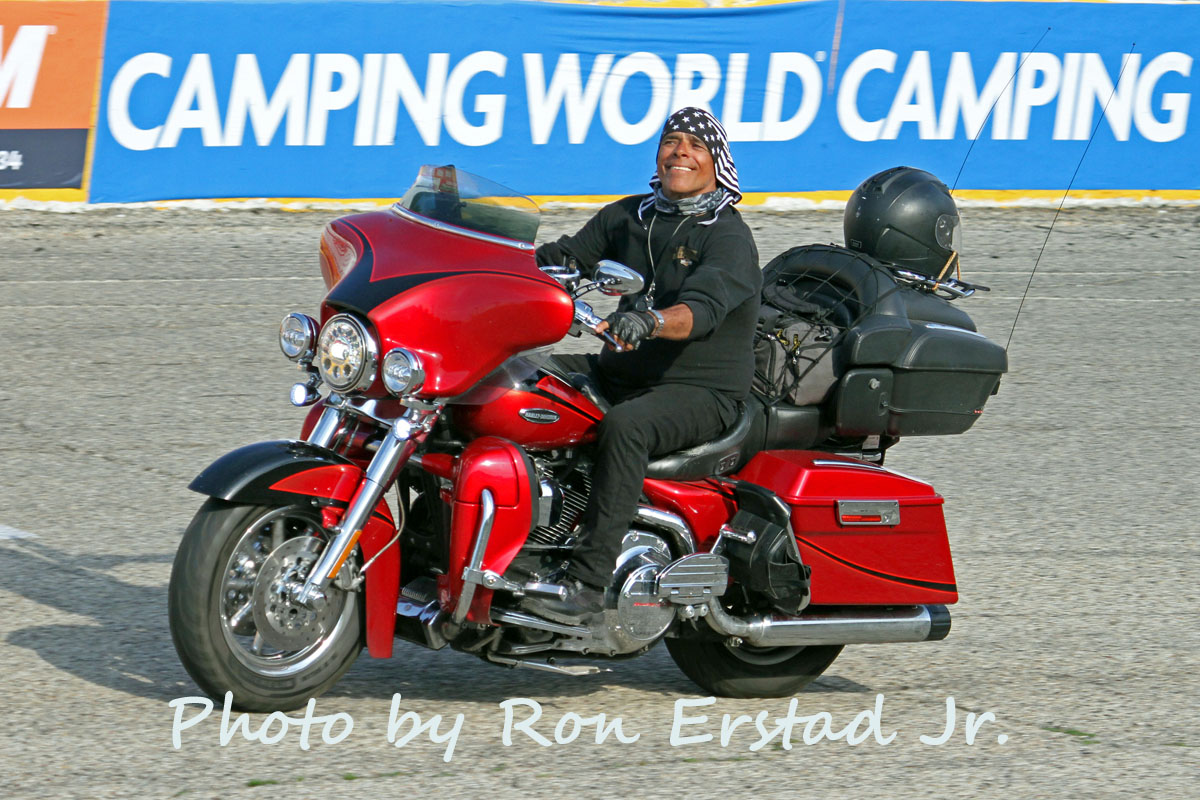 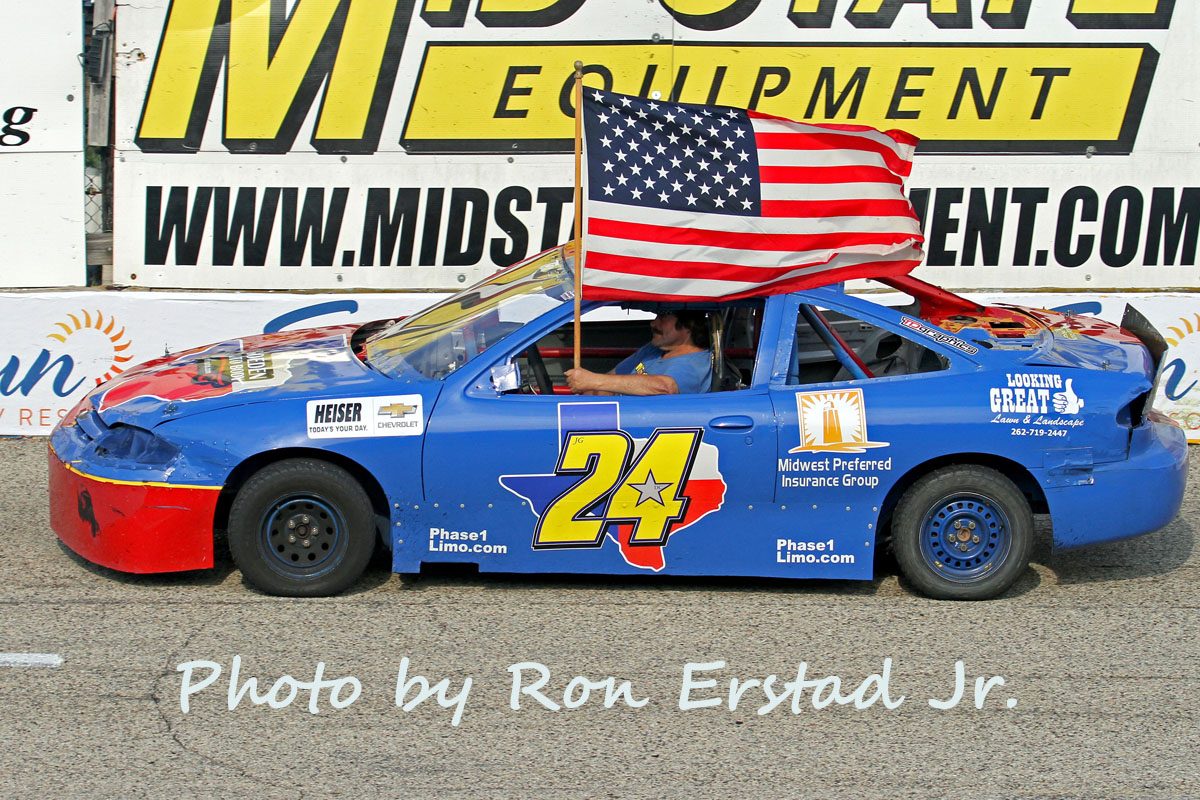 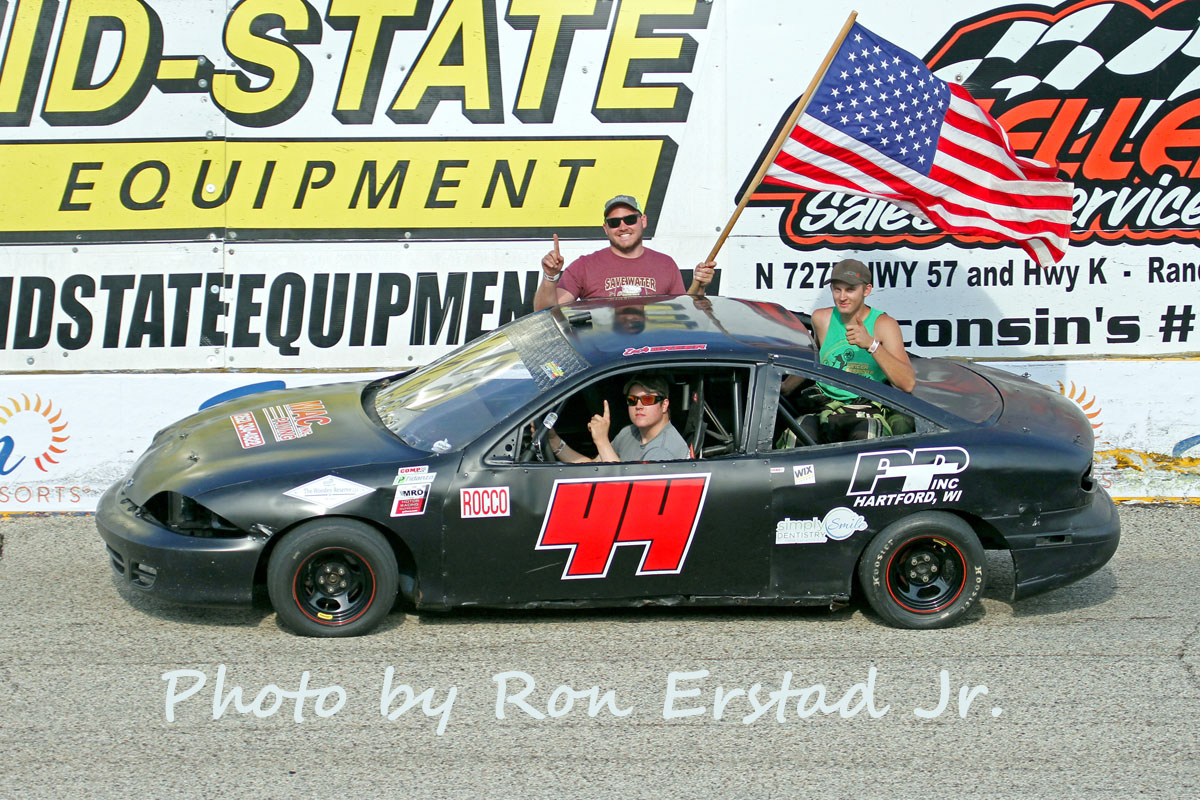 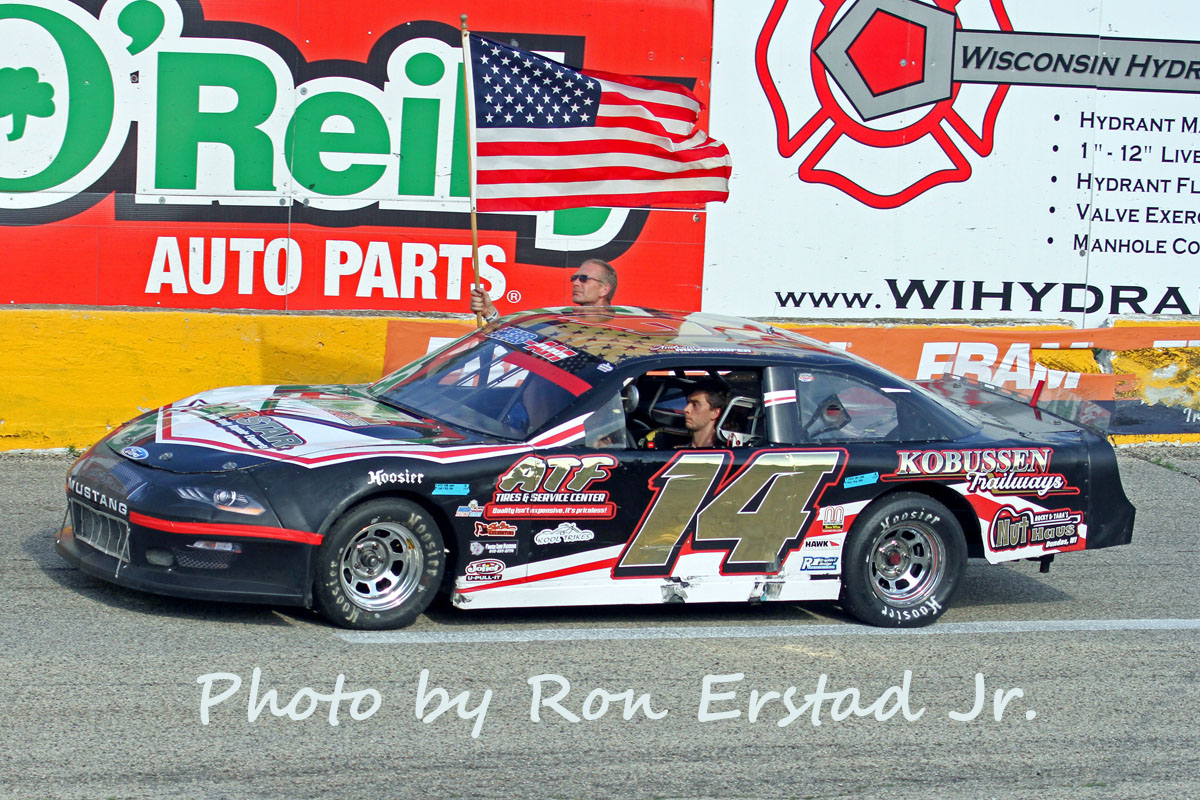 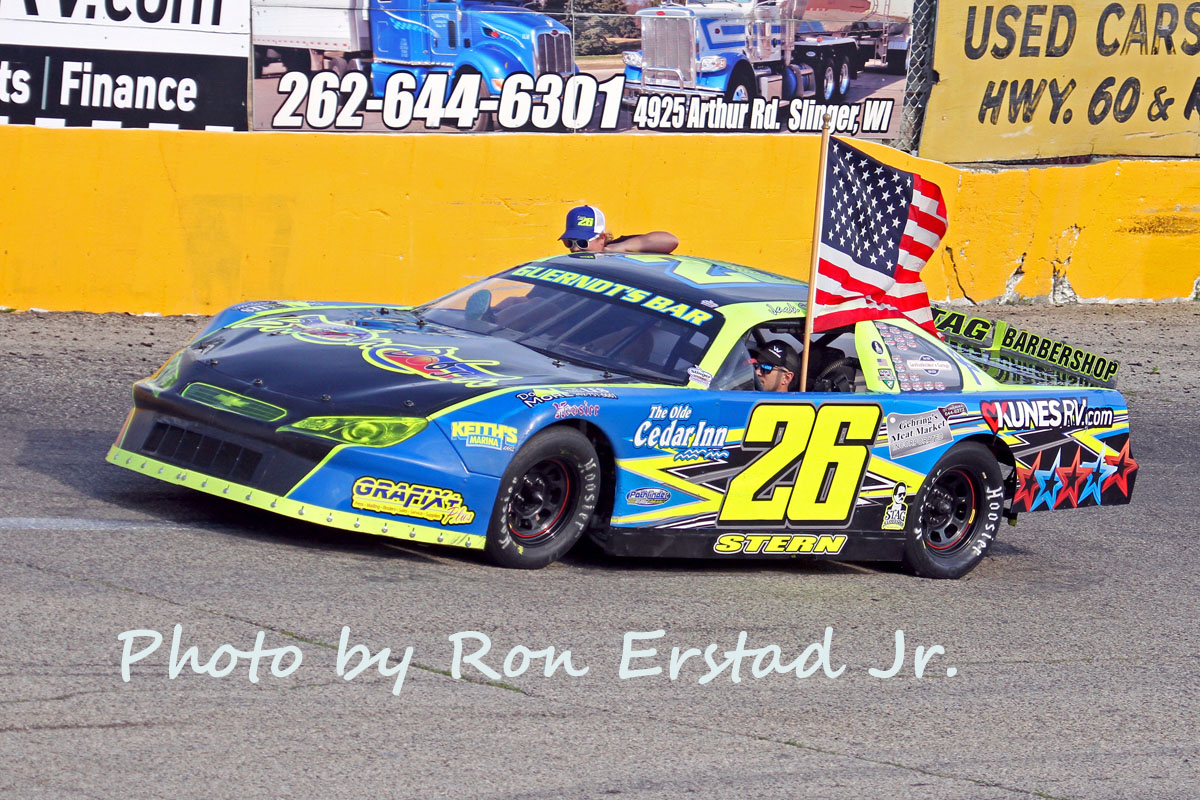