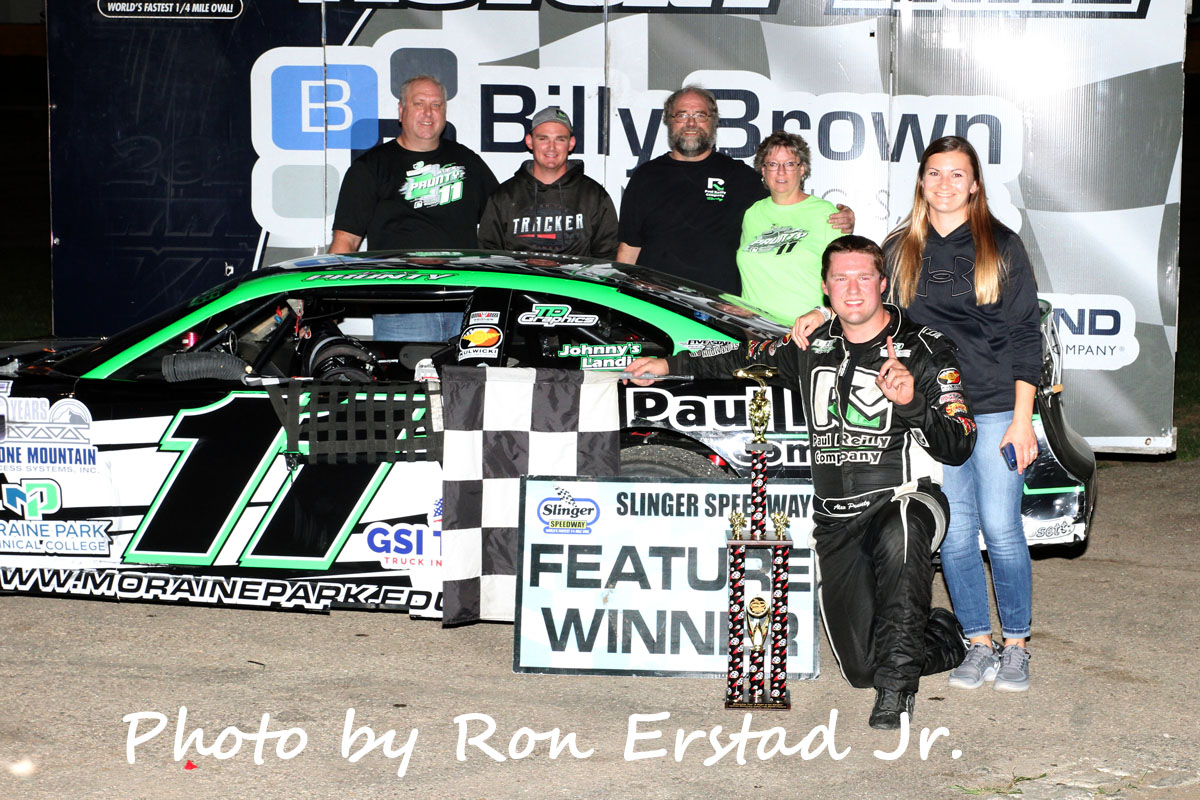 “How about that?” Prunty asked from victory lane, “With the year that we have been having, we built this whole new car and we wore everybody out. We wanted to get a competitive piece to race against these big dogs and it wasn’t looking good this last month as we have just been slow. We went to work on it these last two weeks and with the off week we found some things we wanted to try and damn, that thing was good tonight.”

“I don’t think we need to talk about our relationship,” Prunty continued when asked about having Bickle on his tail for the closing laps. Ever since the two tangled at Rockford a few years ago and Bickle gave Prunty some carpentry advice with a 2×4, the relationship between the two has been testy and just two weeks ago they were involved in another incident at Slinger. “I was looking behind and thinking, oh boy is he (Bickle) saving or is he going?” “Finally, we had a really good car and I was confident with what we could do with it and he gave me the top and after that it was “Sayonara”, let’s go!”

“It was one of those times we didn’t need a yellow,” Bickle explained having lost the lead just after a competition caution break on lap 35 to check tire wear,” The car was really tight in practice and qualifying and we loosened it up a little bit too much. We had the restart and I ran the 11 (Prunty) like we really race and not like he races me normally. I didn’t run into the side of him, I didn’t run him into the wall or run him in the infield.”

“I didn’t spend $125,000 on a chassis to come outrun me with our home built stuff,” Bickle continued all but assuring the rivalry lives on. “I’m pretty happy with that.”
Current championship point leader Luke Fenhaus finished third and was able to maintain his 25-point lead over Bickle heading into the super late model championship round next Sunday night.

“Other than the championship, the Alan Kulwicki Memorial is probably the biggest one I wanted to win,” Fenhaus stated as he also currently leads the standings in the Kulwicki Driver Development Program, “but tonight is about Alan Kulwicki and I’m super proud of Alex Prunty as he has helped me in so many different ways so it’s cool to see him grab one. To run top three tonight and be the fast qualifier, I’m proud of my effort and it’s tough to grab these finishes but I try when I can so we just have to keep rolling and working hard on our stuff.”

Dennis Prunty started eleventh and worked his way through the field to finish fourth while early race leader Ryan DeStefano took the checkered flag in fifth place. R.J. Braun gained three spots from his starting position and finished sixth ahead of Mike Held in seventh and Brad Mueller in eighth. Rich Loch and Brad Keith rounded out the top ten finishers in ninth and tenth respectively.

Alex Prunty won the super late model fast dash and Luke Fenhaus was the fastest qualifier after posting a lap time of 11.258 seconds.

Justin Okruhlica took the lead in the later stages of the 25-lap modified feature and drove to the victory over Bill Tandetzke and Tyler Schley in second and third respectively. Carl Benn finished fourth and Vince Jung made his modified debut a successful one with a fifth place finish. Bill Tandetzke won the modified heat race and Justin Okruhlica was the fastest qualifier after lapping the speedway in 12.400 seconds. Tyler Schley’s third place finish earned him the track championship in the modified division over Bill Prietzel, who broke a hub in the heat race and crashed.

Misty Benn turned back challenges from Brandon Tackes, Billy Braun, and Marty Tackes to win the 25-lap slinger bees main event. Brandon Mennicke finished fifth and Brady Held was sixth as the top six cars crossing the finish line in a tight pack. The slinger bees heat races were won by Brady Held and Evan Hassler while Brandon Mennicke was the fastest qualifier after turning in a lap at 15.255 seconds.

Ayrton Brockhouse was the winner of the 20-lap Bandolero feature over Axel Oldenhoff and Paegan Ellingson. Paxton Benz and Colton Pershall rounded out the top five in fourth and fifth. The race was briefly halted under the red flag on lap nine for a multi-car incident in turn two in which the car of Haylee Flairty rolled over several times. Flairty emerged from the wrecked car and walked to the ambulance under her own power before being taken to a local hospital for precautionary reasons.The Bandolero heat races were won by Markus Obermeyer and Ayden Brockhouse while Lincoln Cain was the fastest qualifier with a lap time of 14.720 seconds.

Scott Goetzke closed out the evening with a win in the Figure 8 race over Bill Shavlik and Rick Bruskiewicz. Nick Ostberg and Ryan Lovald finished in fourth and fifth. 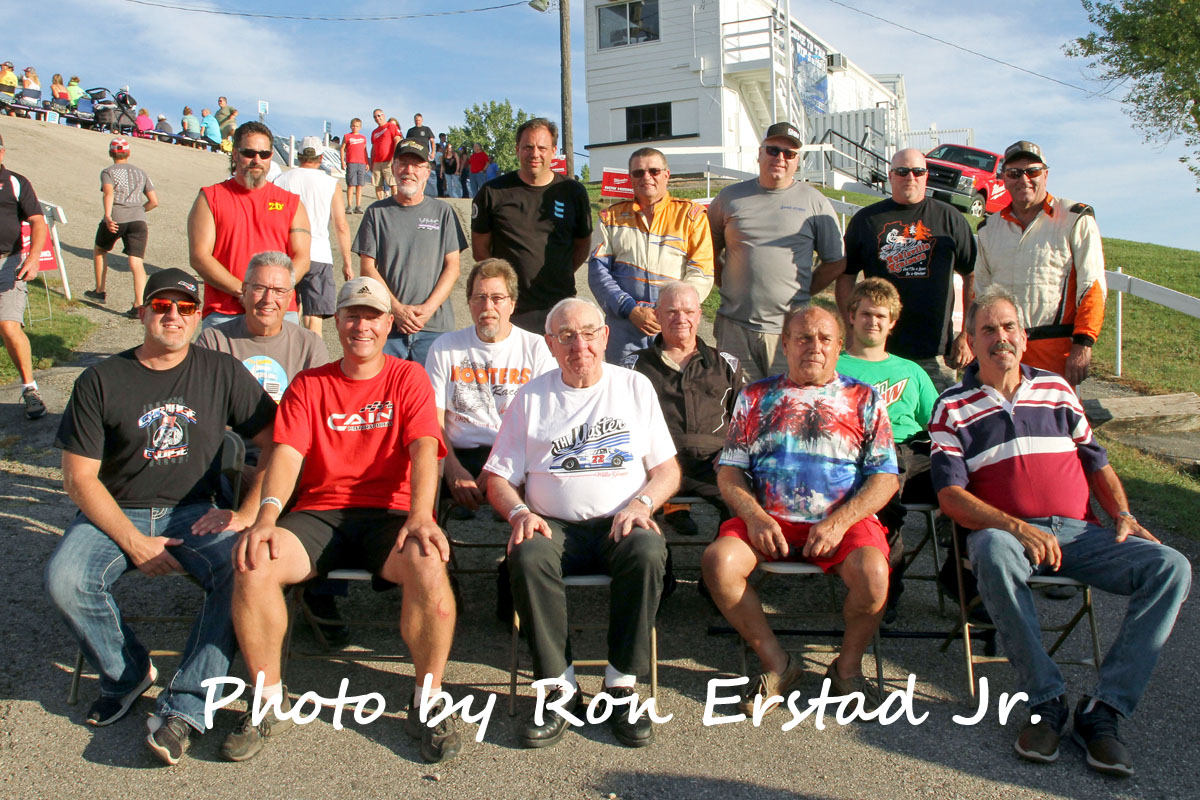 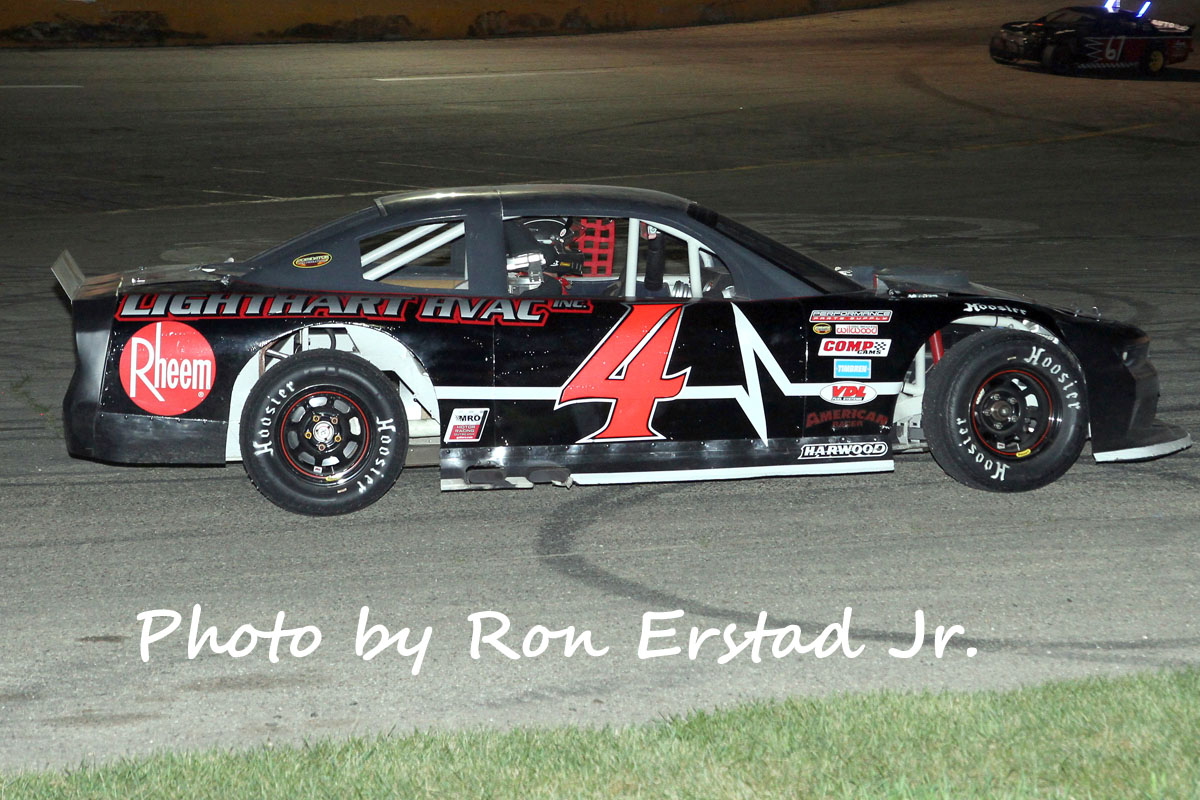 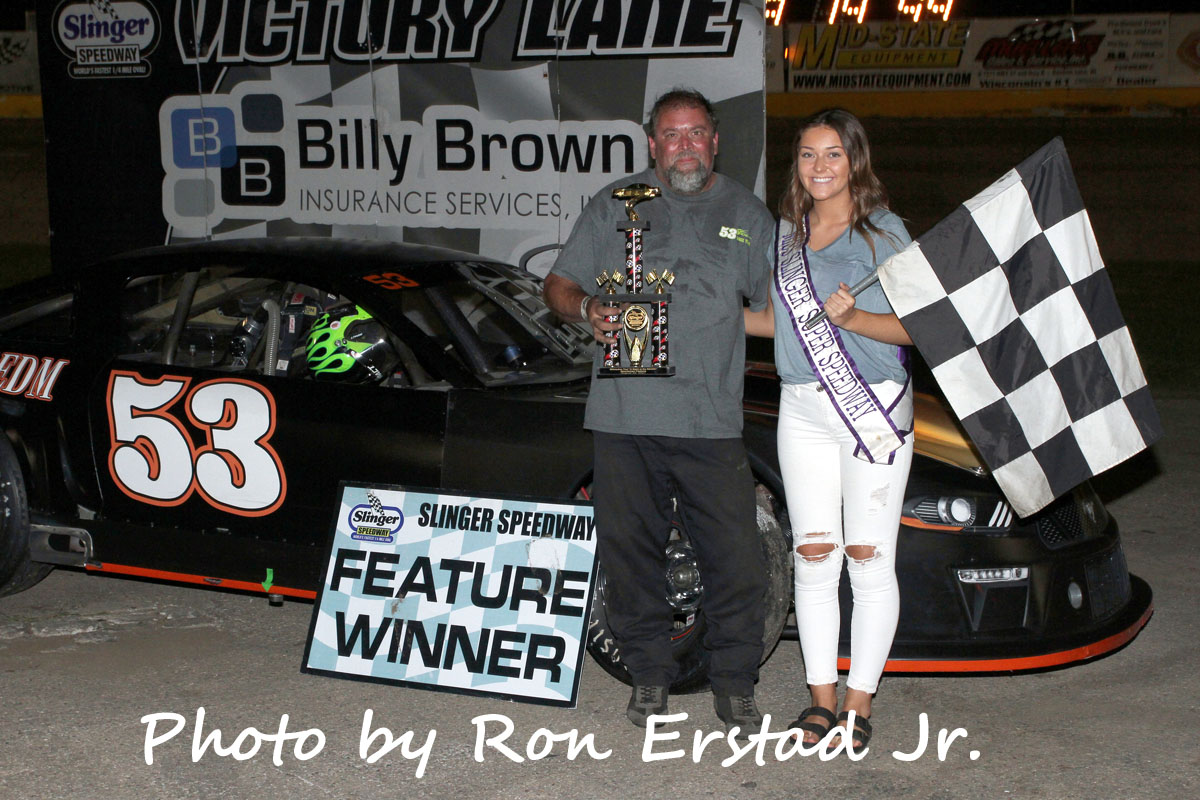 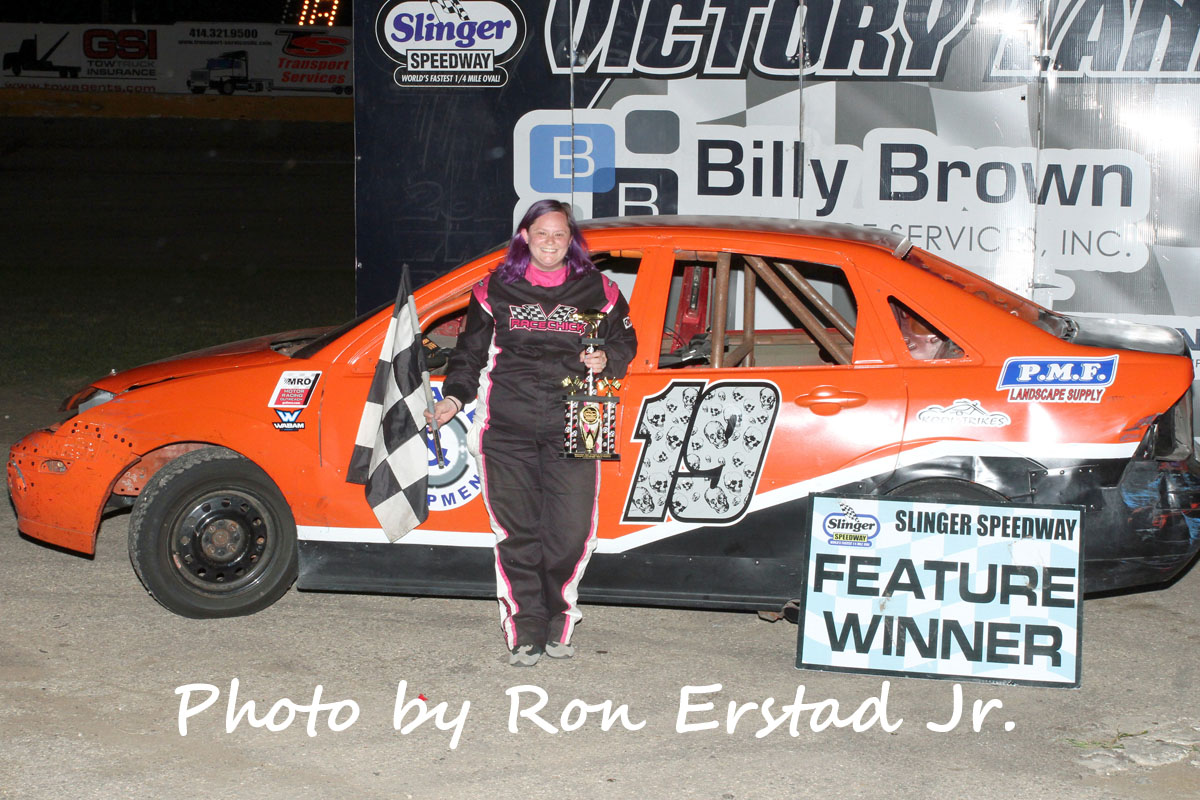 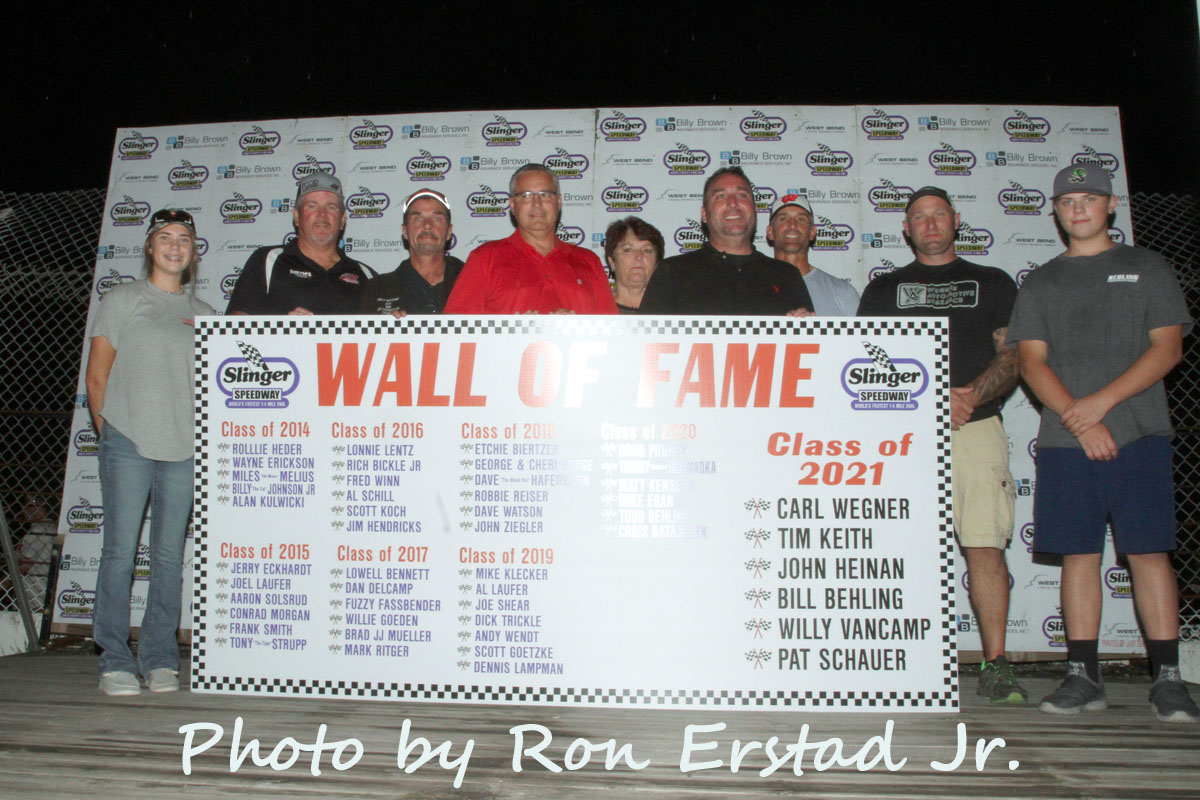 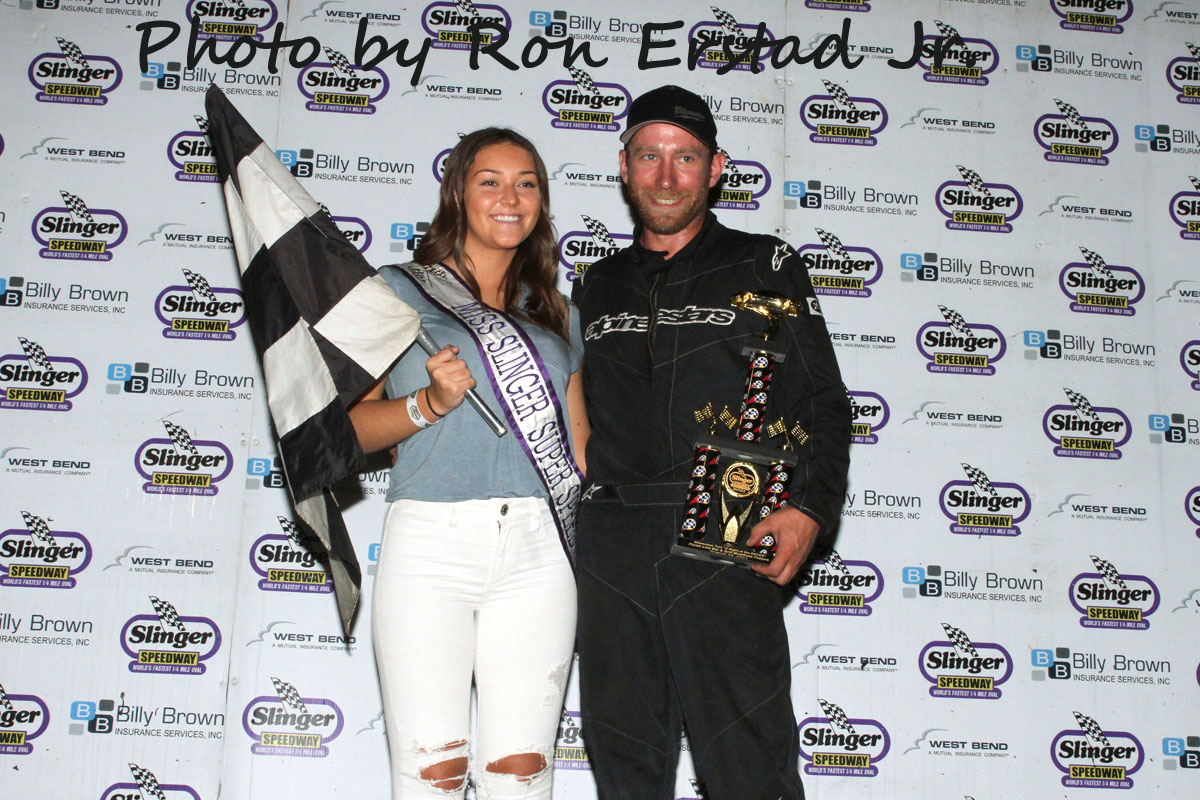 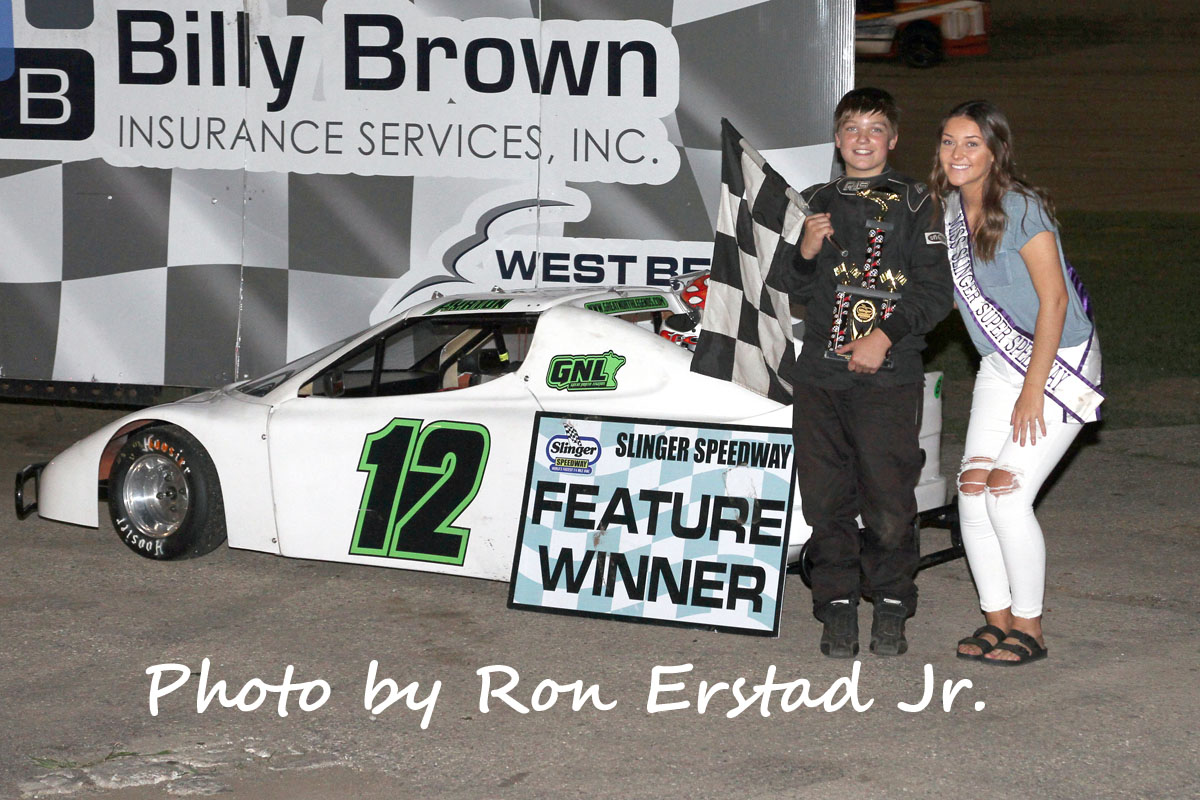 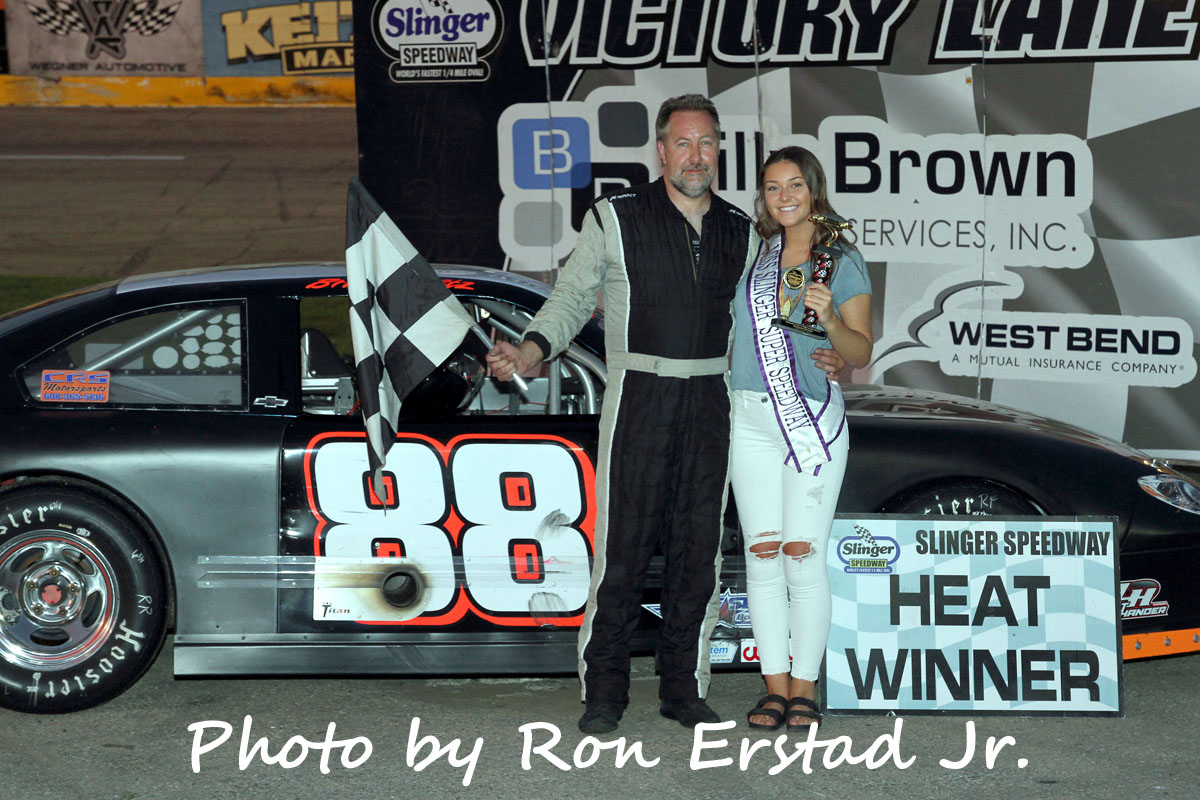 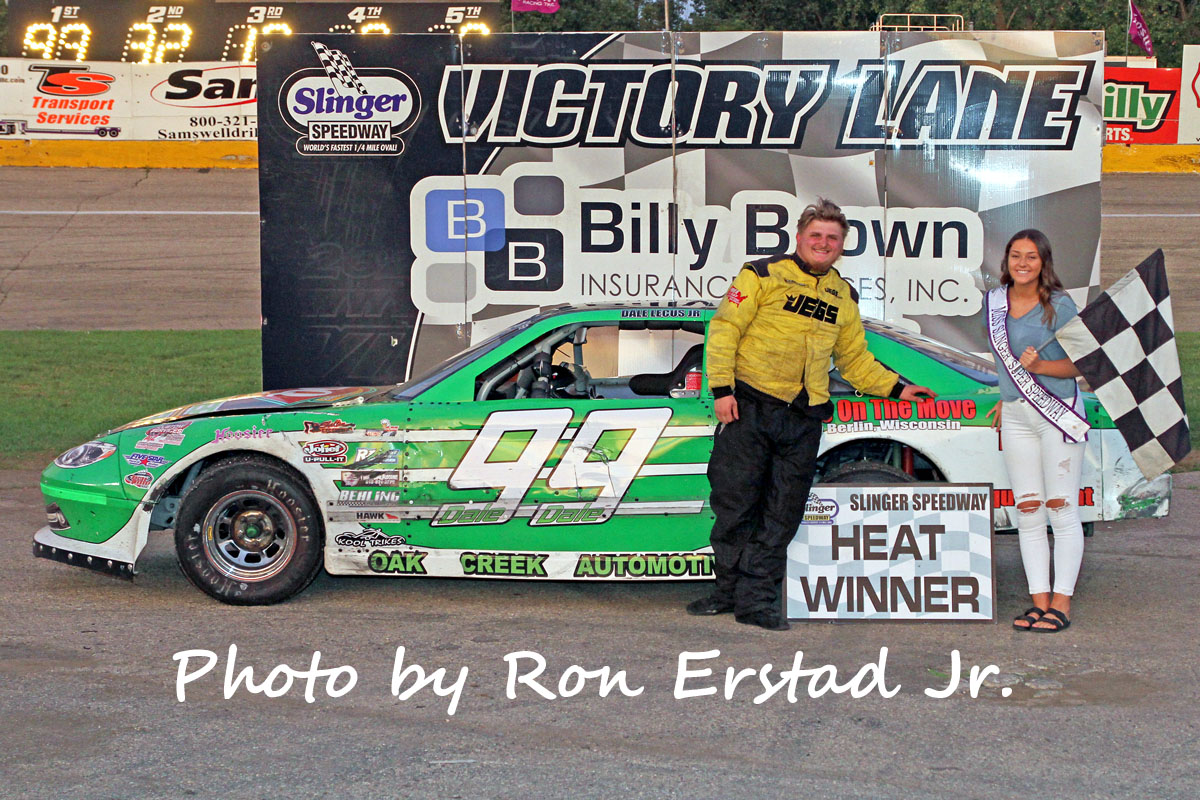 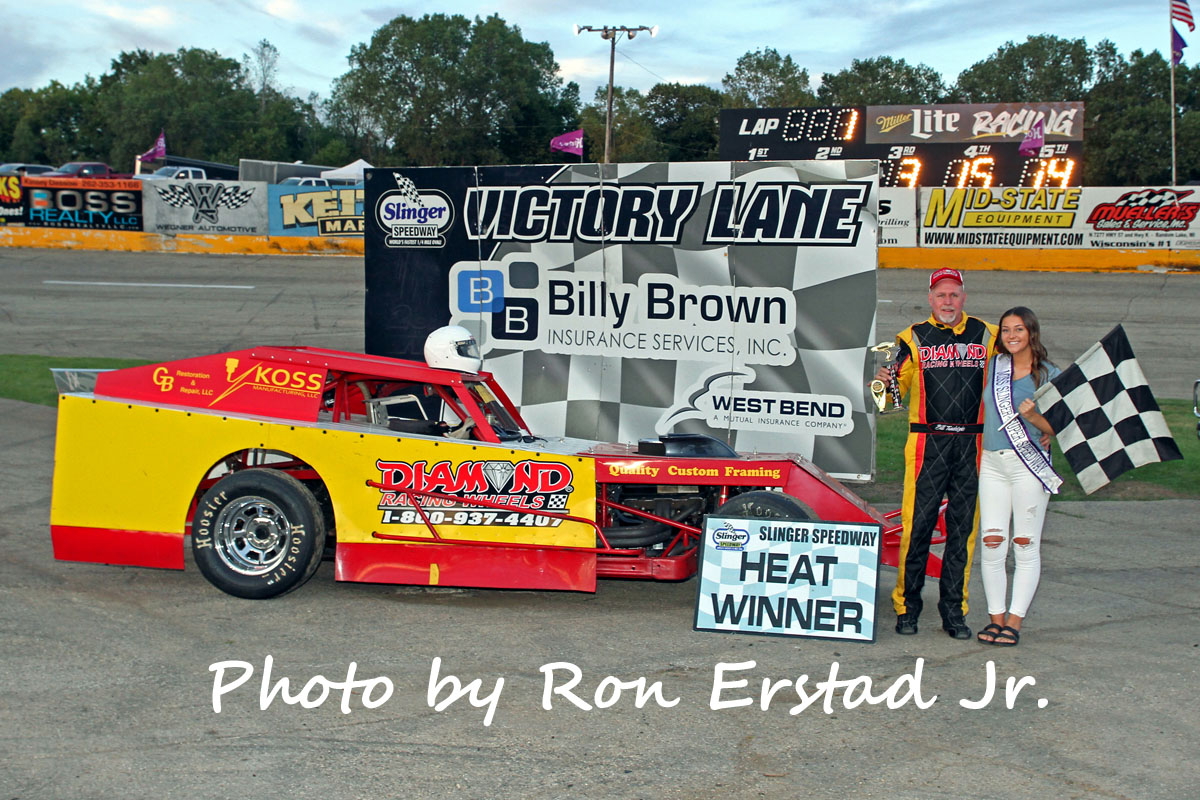 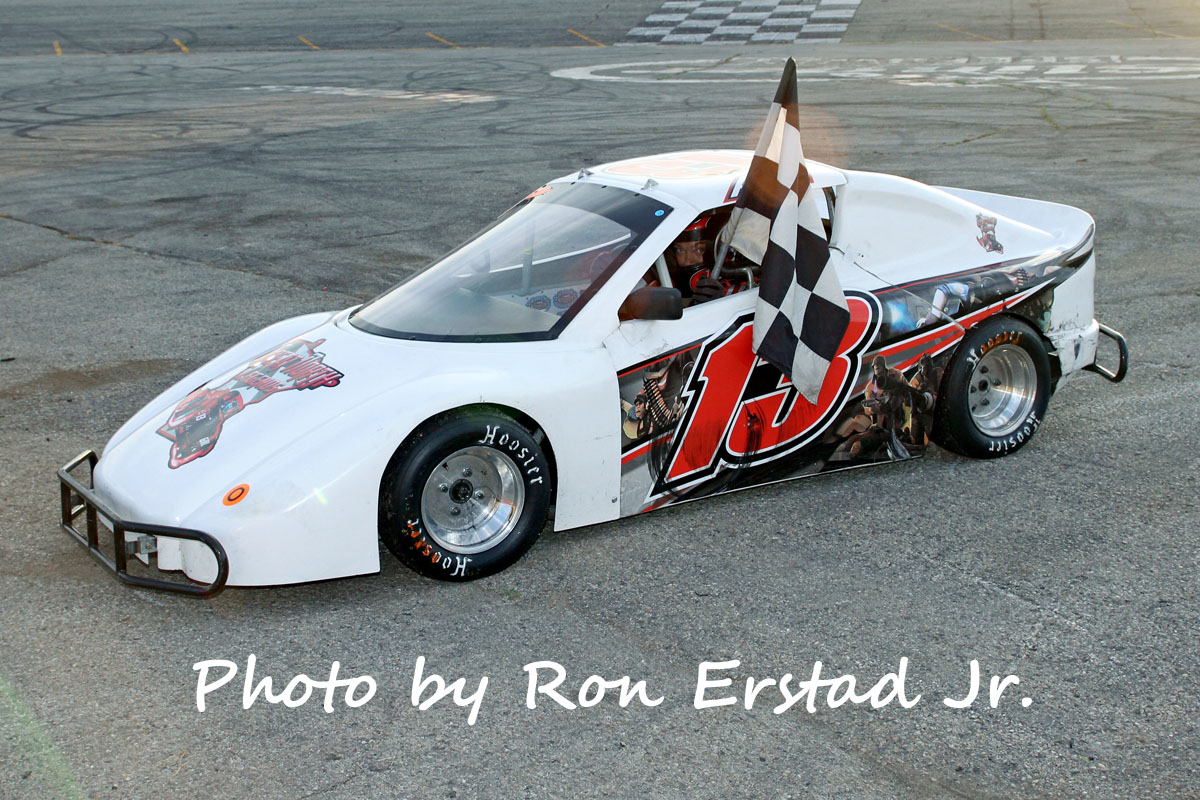 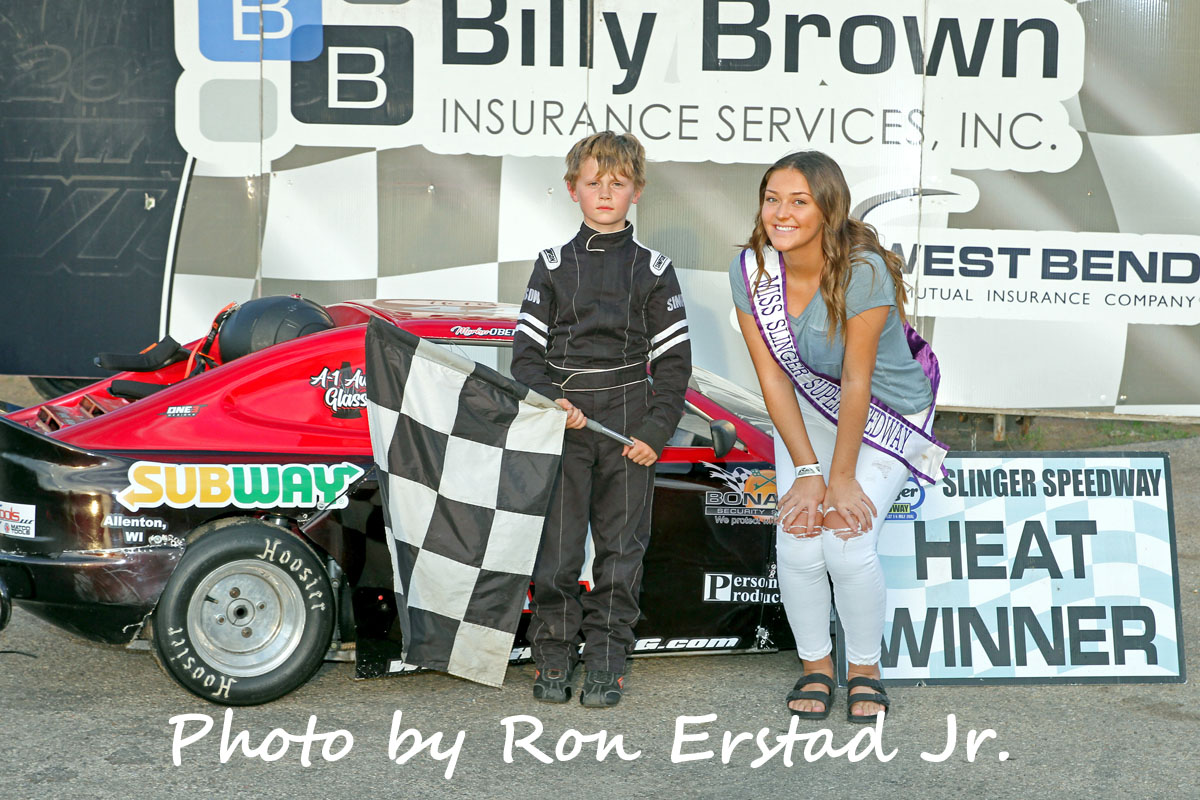 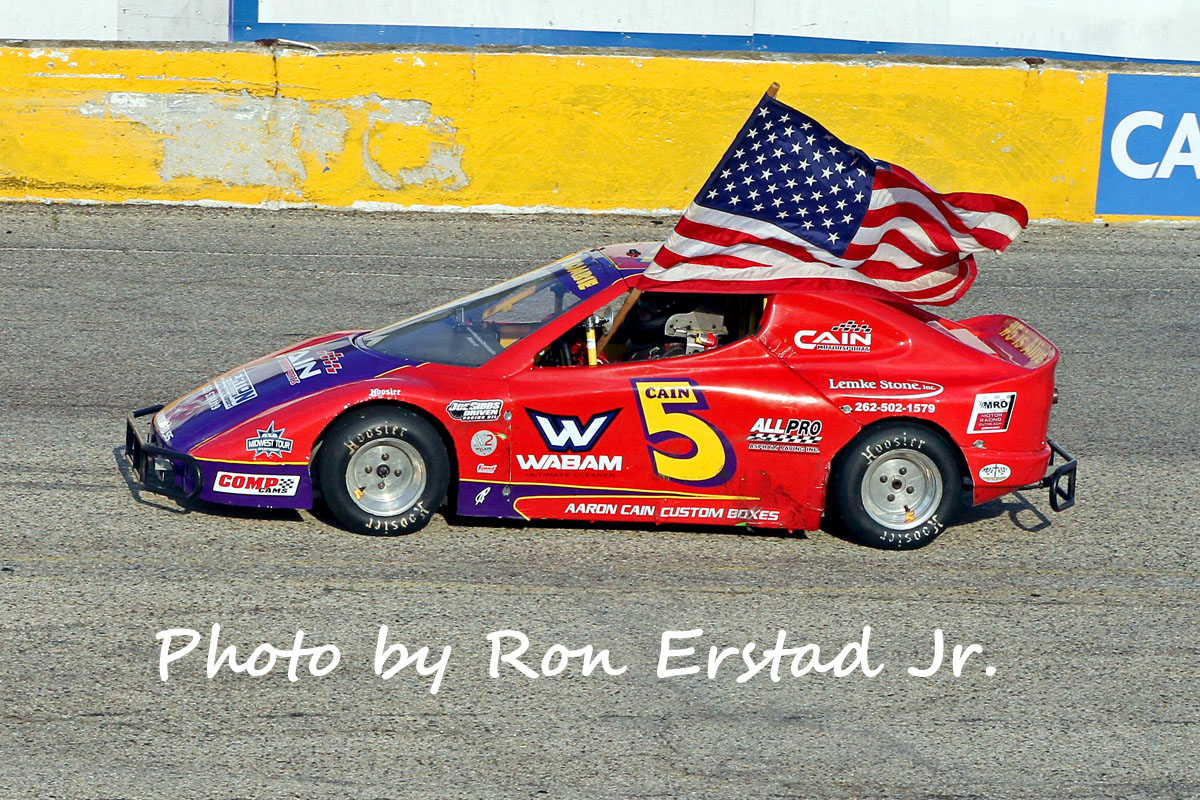 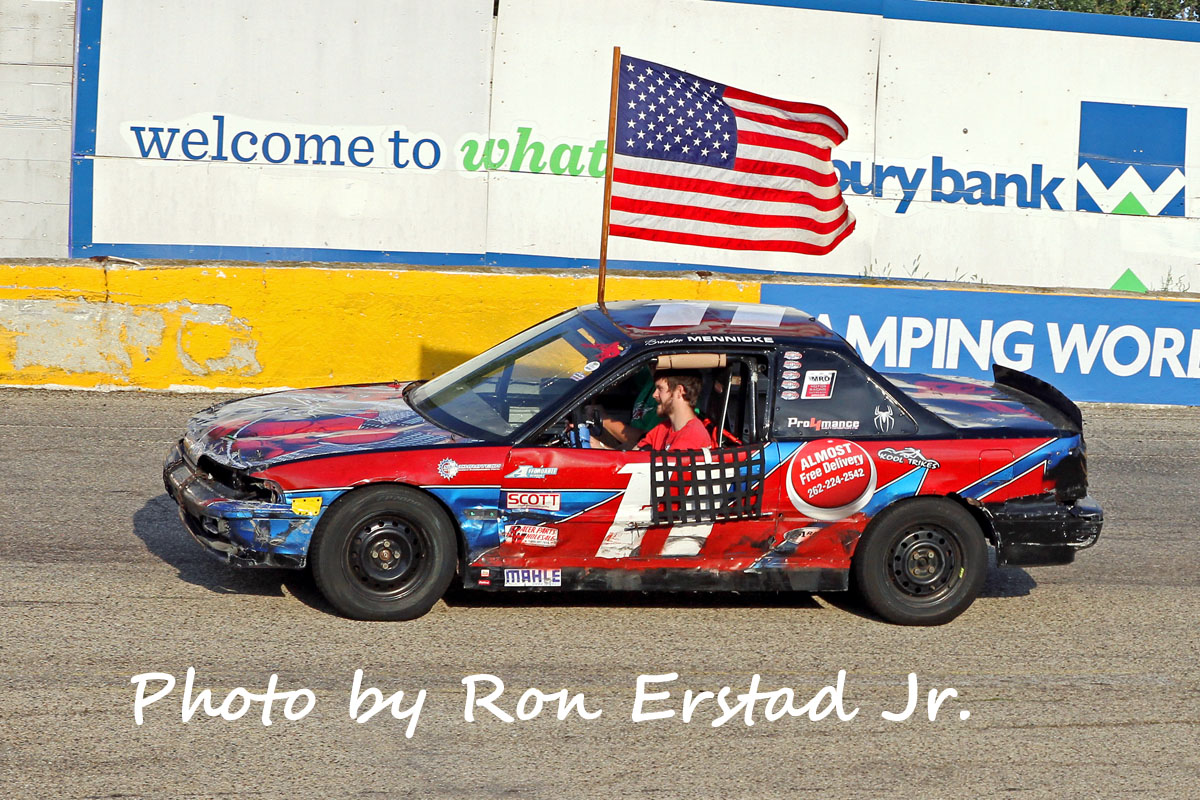 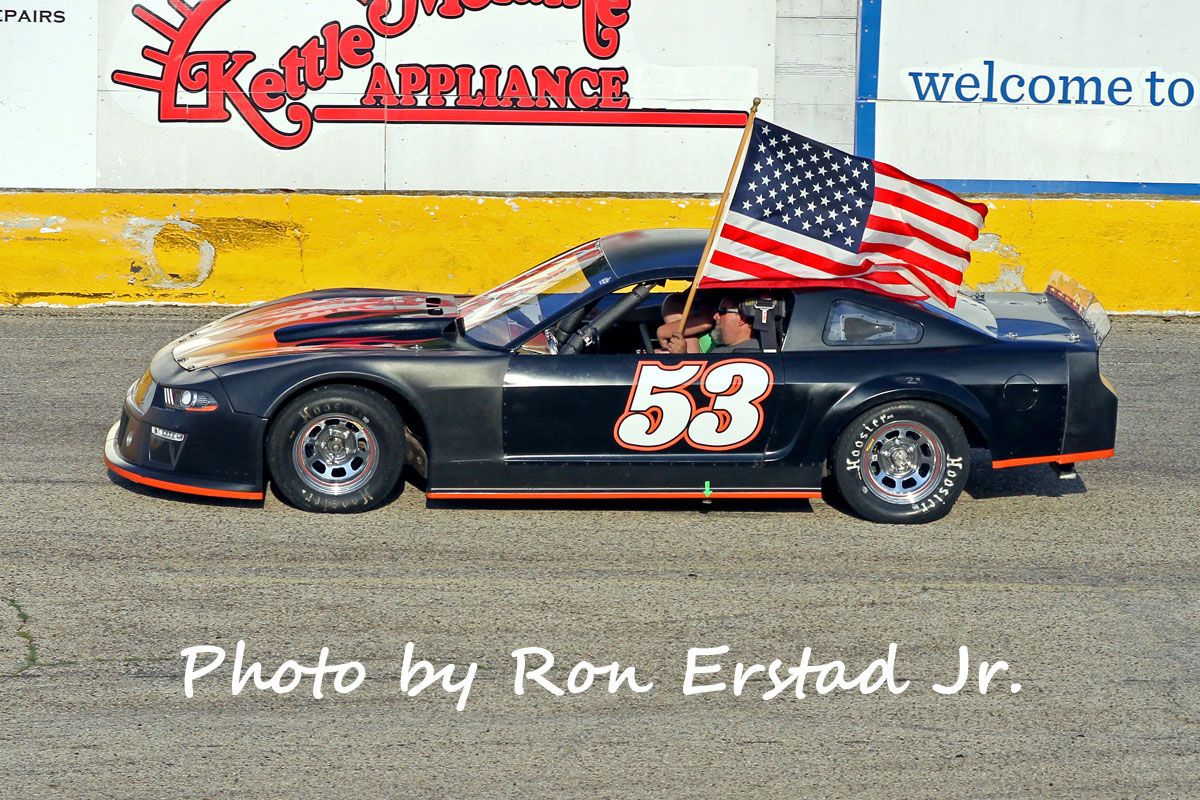 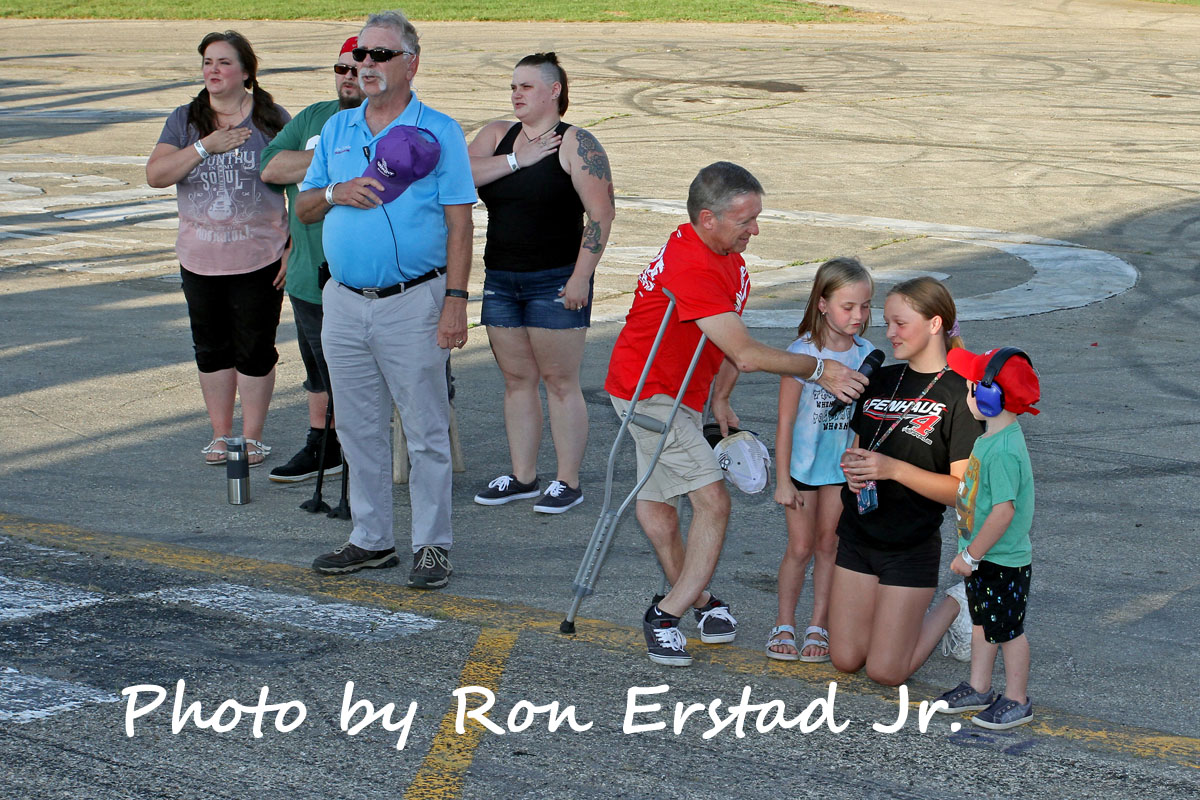 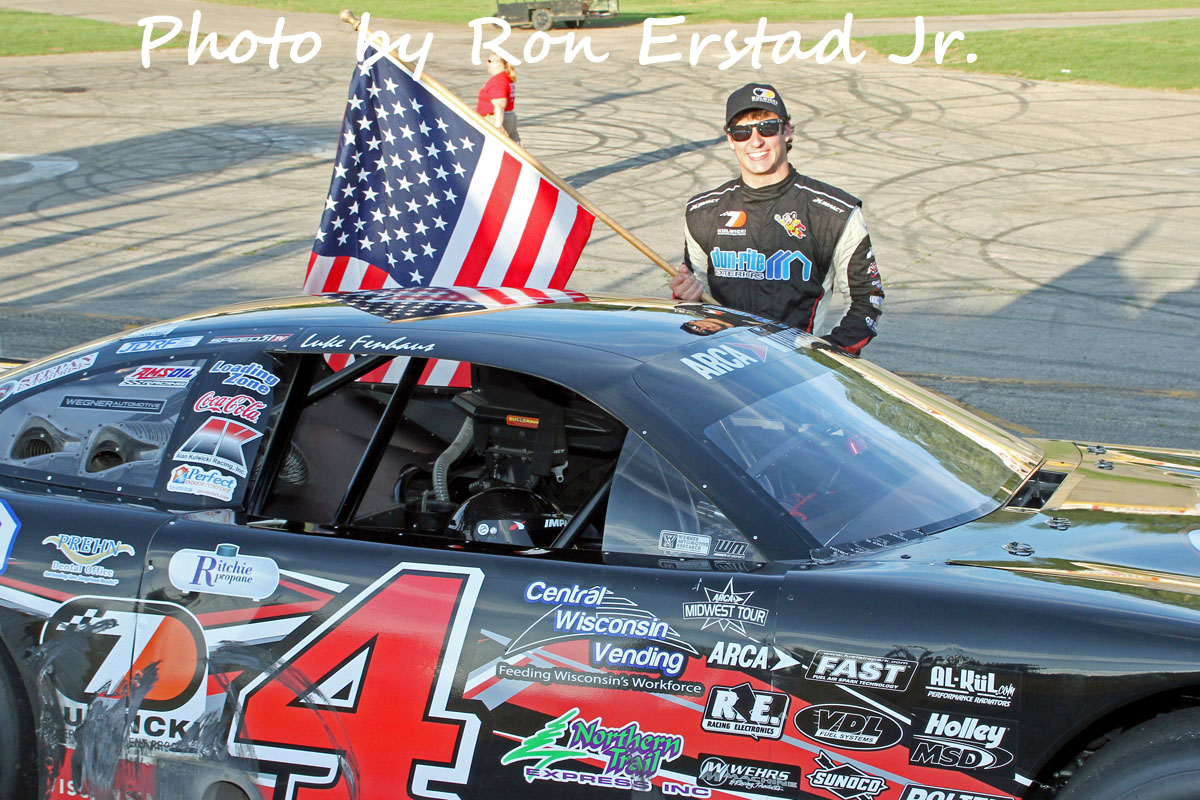 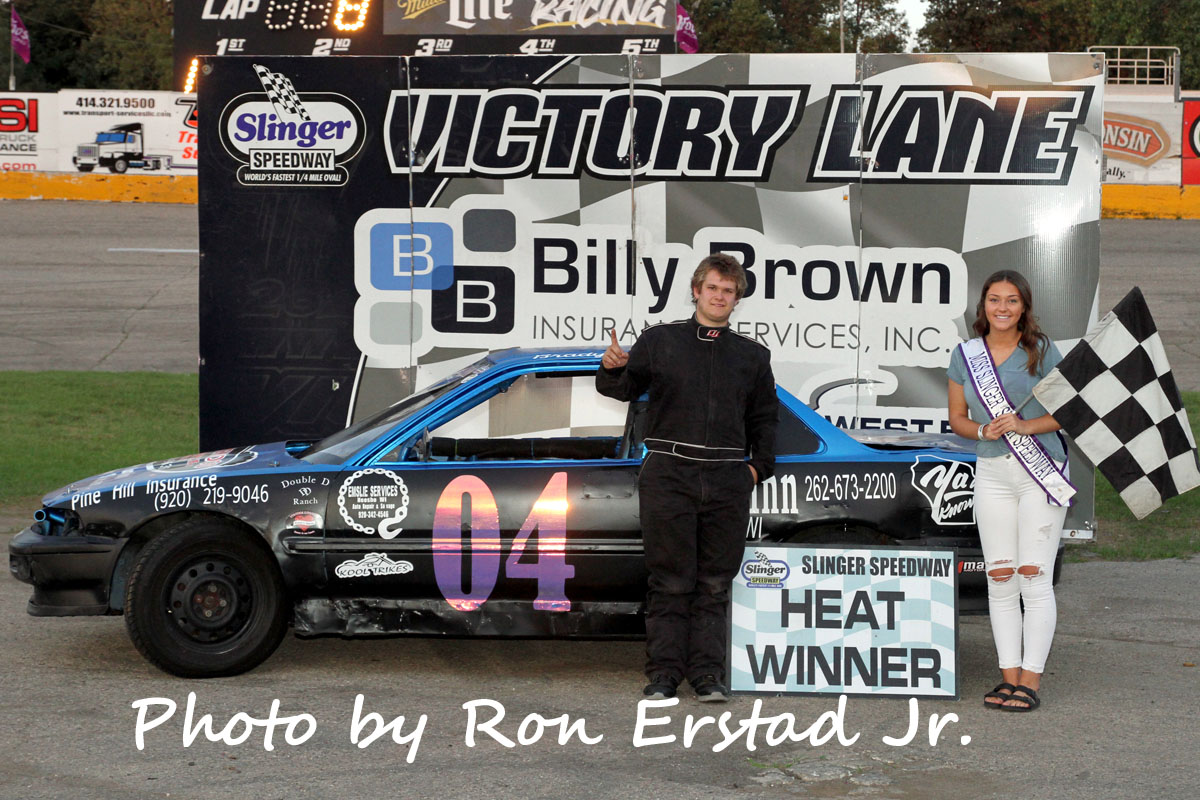 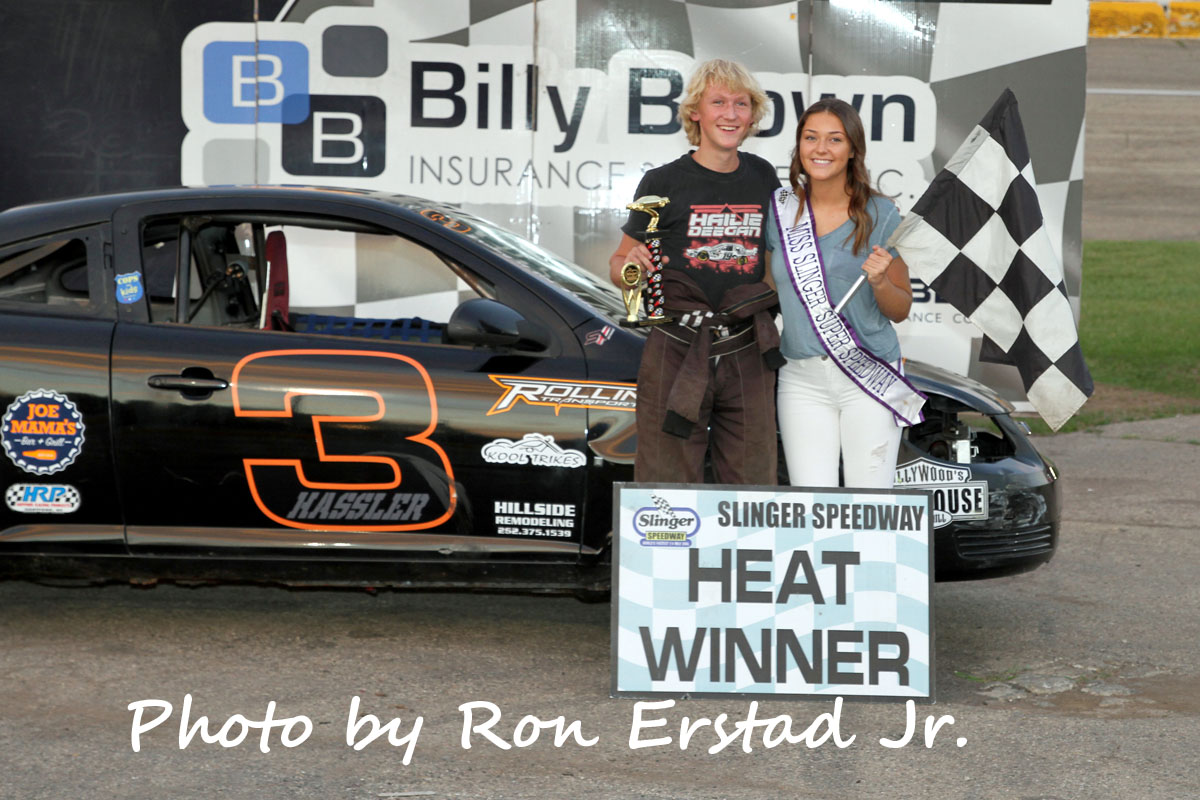