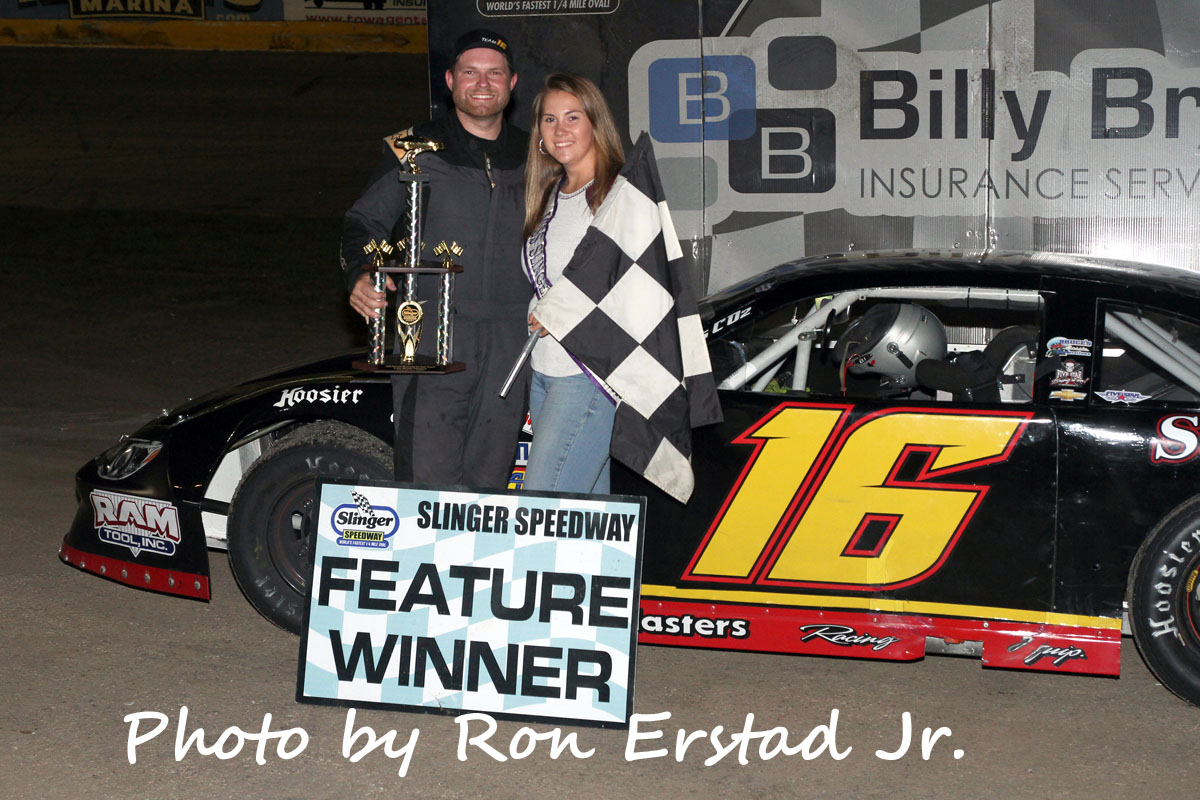 By Dan Margetta
Slinger, Wis., August 22—With the way Jordan DeVoy’s race day began, standing in victory lane after winning the 50-lap late model feature Sunday night at the Slinger Speedway was likely the last place he thought he would end up. Yet, there he was perched on the victory deck with the big trophy after besting Jack Stern and Ryan Craine to claim his second feature win of the season.

“Today was a disaster but we overcame it,” a somewhat bewildered DeVoy told the crowd afterwards, “We had a valve stem issue on the trailer before the trailer even left the shop and the crew got the tire off and fixed it. Then we jumped in the truck and tried to start the truck and the starter is dead on the truck. So, we found another truck with an open trailer and loaded the car on that and came with four pick-up trucks with all the stuff we needed today.”

“(Fellow Driver) Tom Jasinski let me bum whatever I needed out of his trailer and we made some big changes all day today,” DeVoy continued, “I can’t believe we are standing here but this is awesome.”

DeVoy used the outside groove to work his way around early leader Tyler Hromadka on lap 23 and drove out to a convincing lead while Hromadka, Jack Stern, and Ryan Craine all raced for the second spot. Craine used the outside lane as well to get around Hromadka and Stern followed a few laps later to move into third. With DeVoy well out front, Craine and Stern battled for the runner-up spot with Stern finally able to edge Craine for the position in the closing laps.

“I’m pretty happy with what we had tonight,” Stern said afterwards, “Ryan (Craine) beat us in qualifying and we made some changes but we weren’t good in the heat race. Then we took some bigger swings and I felt like we had one of the better cars we have had all year.”

“Me and Jack (Stern) had a blast there at the end,” Craine stated, “That was good stuff. I screwed up going into turn one and that was enough for Jack to get underneath me. We had a fast car and I felt we could’ve got this one tonight.”

With the super late models having the week off, R.J. Braun brought a late model scheduled to be eventually driven by his brother Billy Braun and drove it to an impressive fourth place finish while Tyler Hromadka finished fifth after pacing the opening 22 laps of the event. Ryan Gutknecht and Tom Berens finished sixth and seventh respectively after being involved in the event’s only caution period on lap seven. Jerry Eckhardt, Tom Jasinski, and Mike Graczkowski completed the top ten finishers.

The front of the field in the 25-lap Super Beez feature was not the place to be on a full moon night of racing as both Al Strobel and Todd Buckley experienced mechanical problems while leading before Zach Greer captured the victory. Brandon Tackes finished second followed by Carl Benn in third. Derek Hoerig finished fourth and Mitchell Strobel was fifth. Rick Schaefer and Zach Greer were the winners of the Super Beez heat races and Todd Buckley was the fastest qualifier after timing in with a lap at 13.535 seconds.

Dillon Schwanbeck stole the show in the Great North Legends division as he scored a clean sweep on the evening by winning the 25-lap feature, his heat race, and setting fast time. Aaron Moyer finished second in the feature while James Lynch was third. Jacob Tiegen and Michael Guderski finished fourth and fifth respectively. The Great North Legend heat races were won by Adam Hansen and Dillon Schwanbeck. Schwanbeck was also the fastest qualifier with a lap time of 13.549 seconds.

Taylor McMullen won the Slinger Sixers feature over Brandon Tackes and Joshua Zacharias. Mark Fogel Jr. finished fourth and Steven Mueller took the checkered flag in fifth. Brandon Tackes won the heat race and Rick Buss was the fastest qualifier. With his second place finish, Brandon Tackes won the Slinger Sixers track championship for 2021.
The Memorial Go-Carts which normally race on Wednesday evenings, held their season finale features throughout the evening in front of the Sunday night crowd to cap off a successful season.

Marty Tackes won the four cylinder Figure 8 race which ended early after a hard on track collision between Allen Maher Jr. and Tom Elsinger. Both drivers were not injured in the mishap and the evening’s racing program was complete at 9:30 pm. 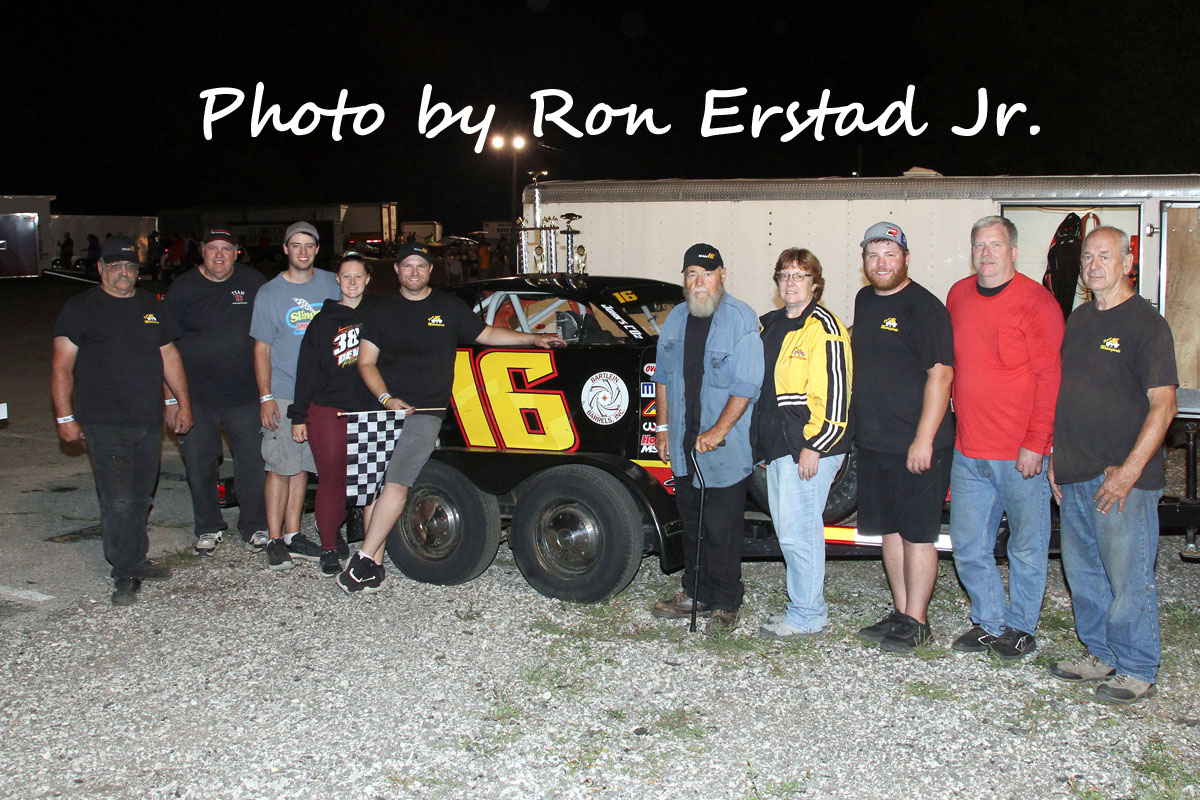 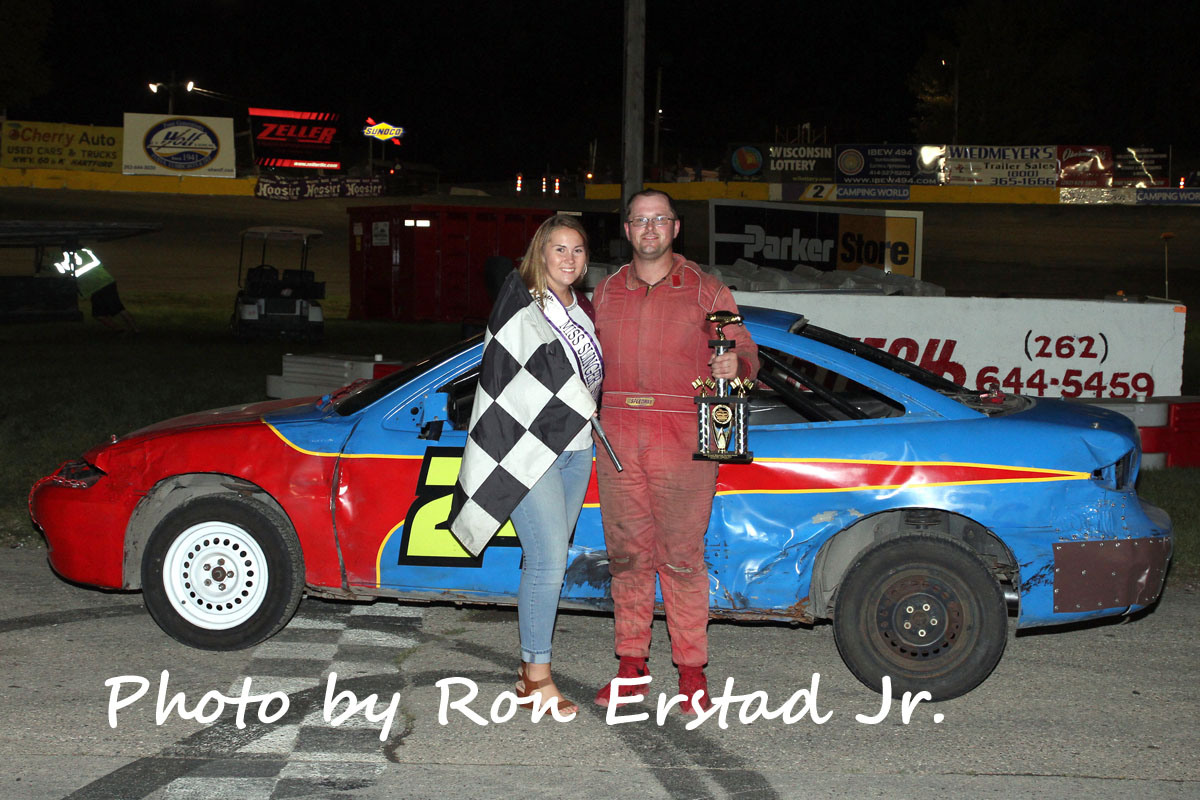 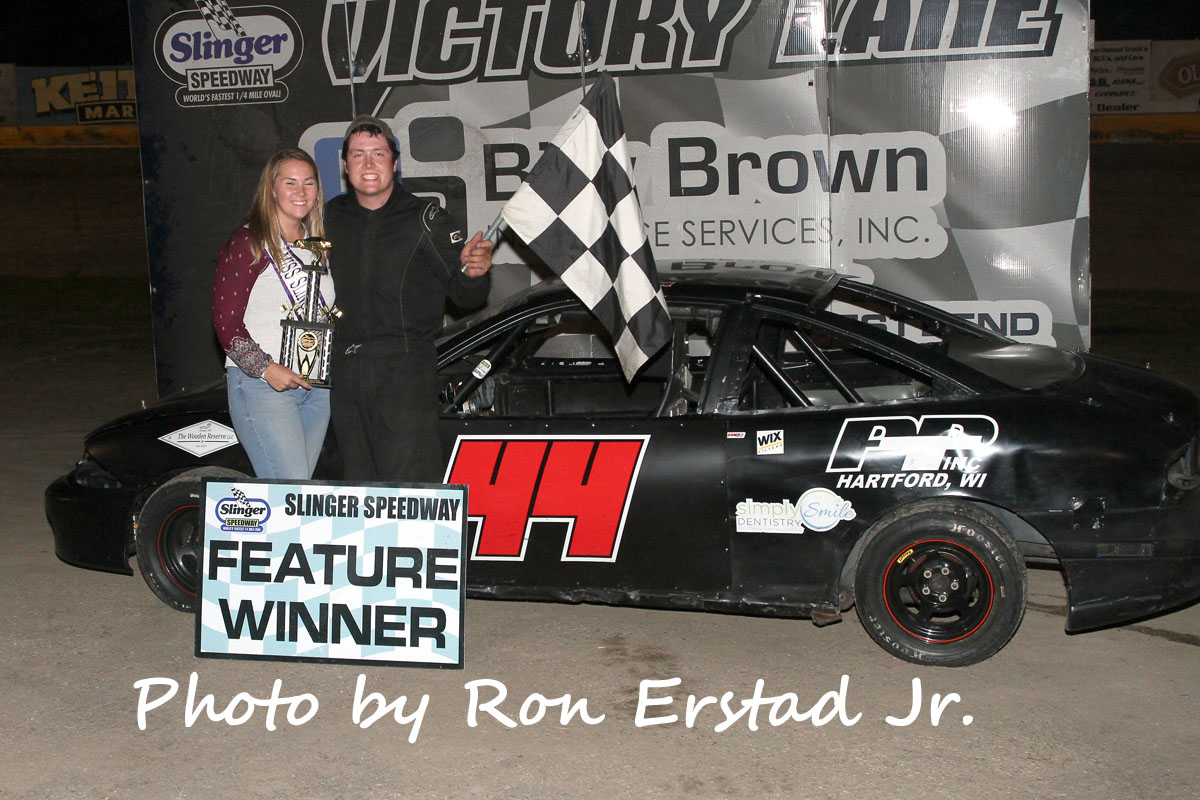 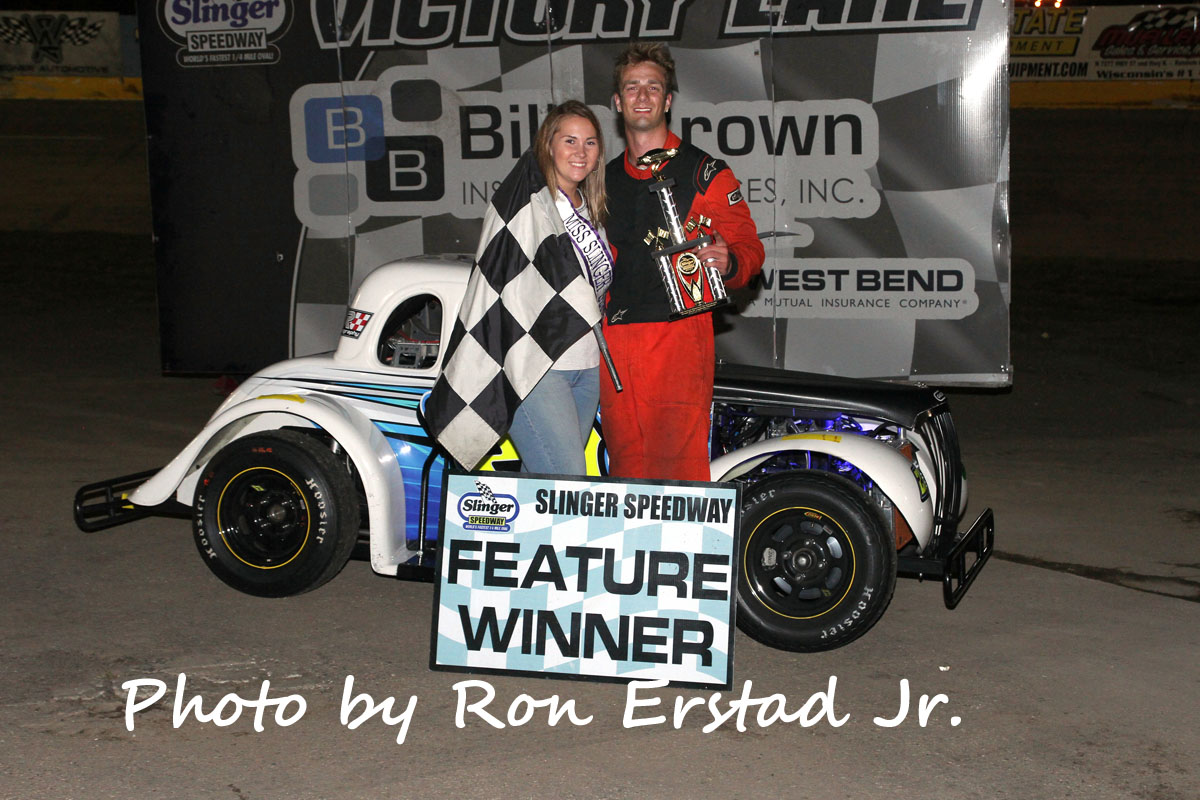 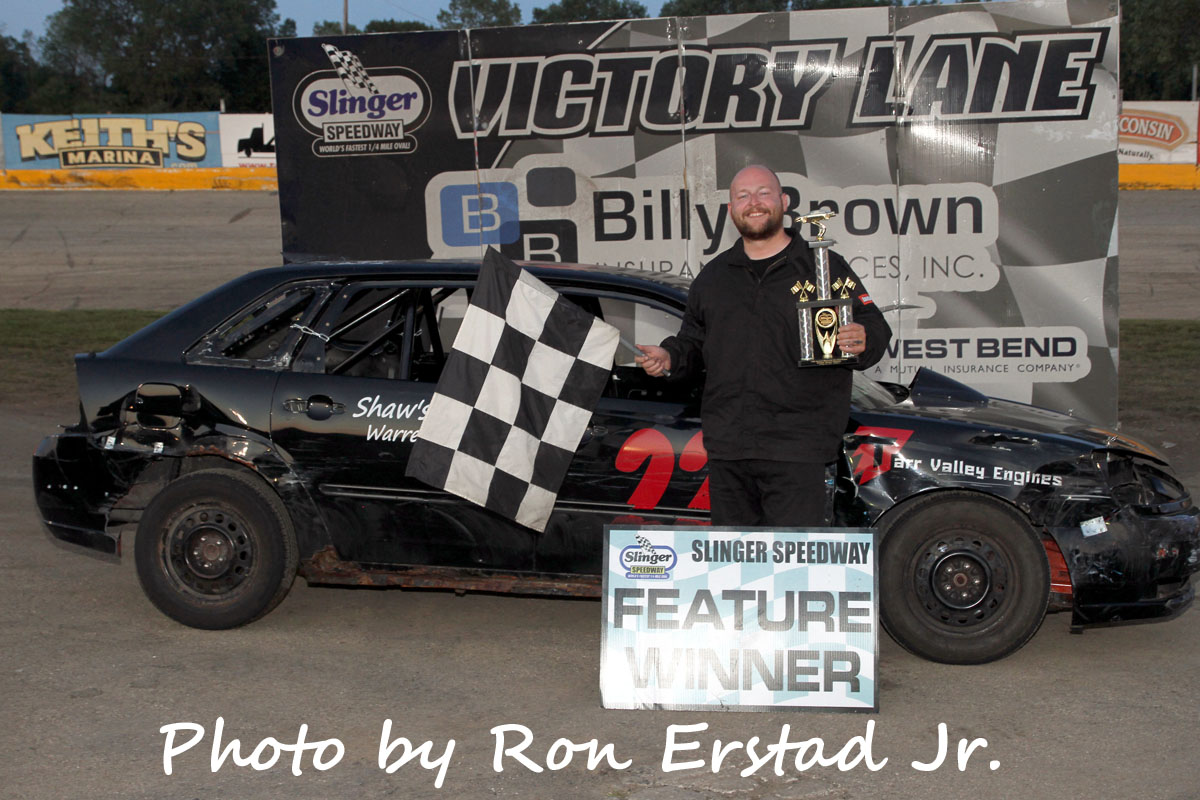 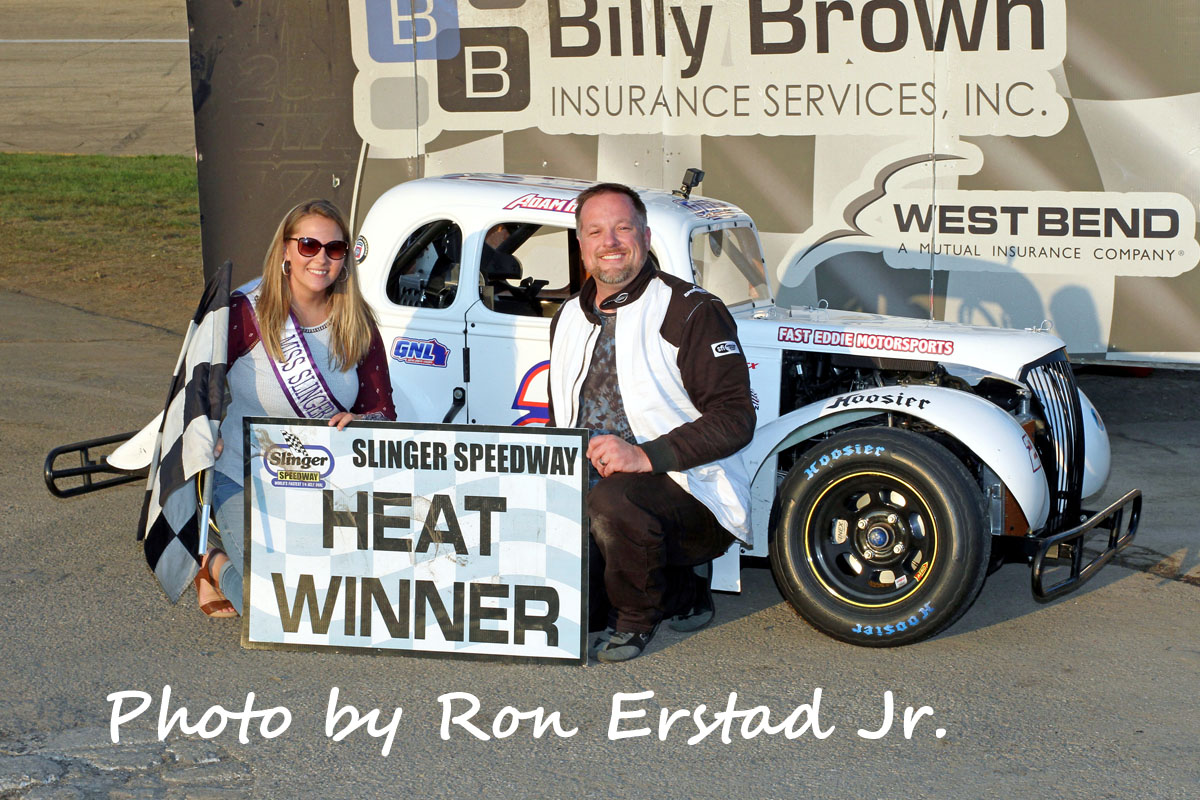 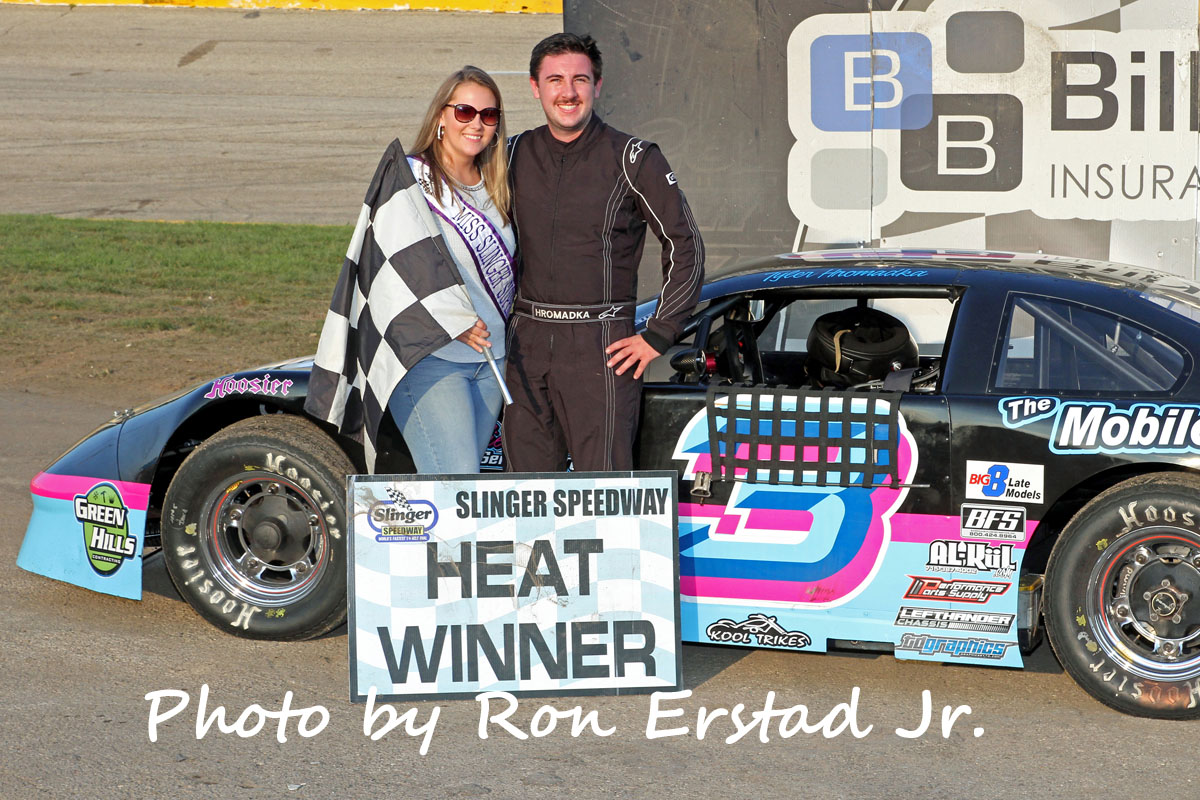 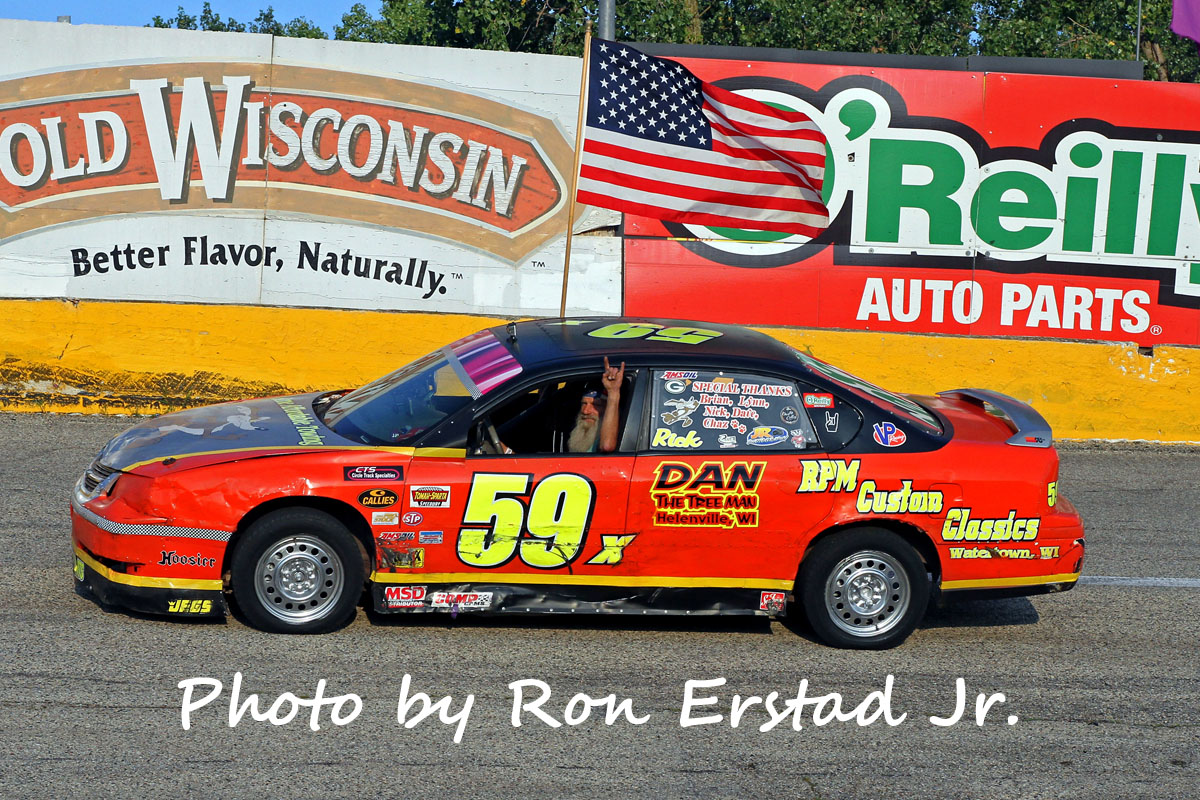 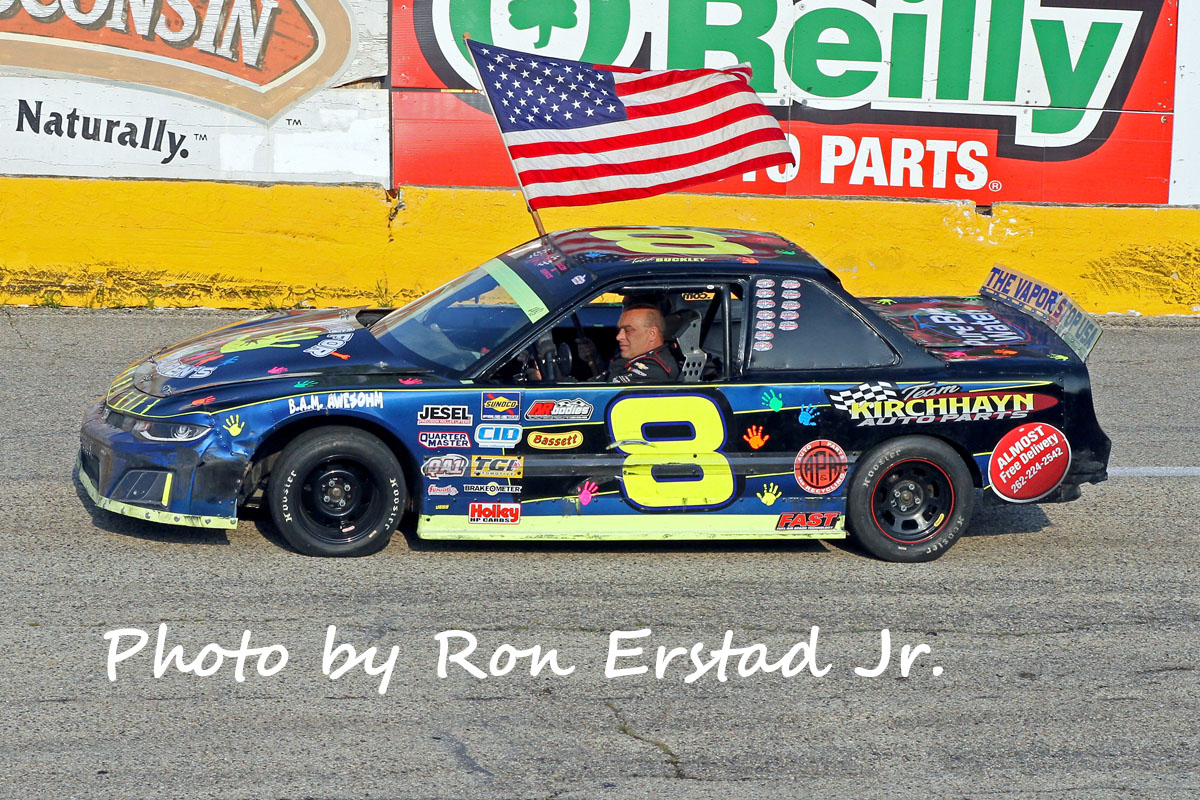 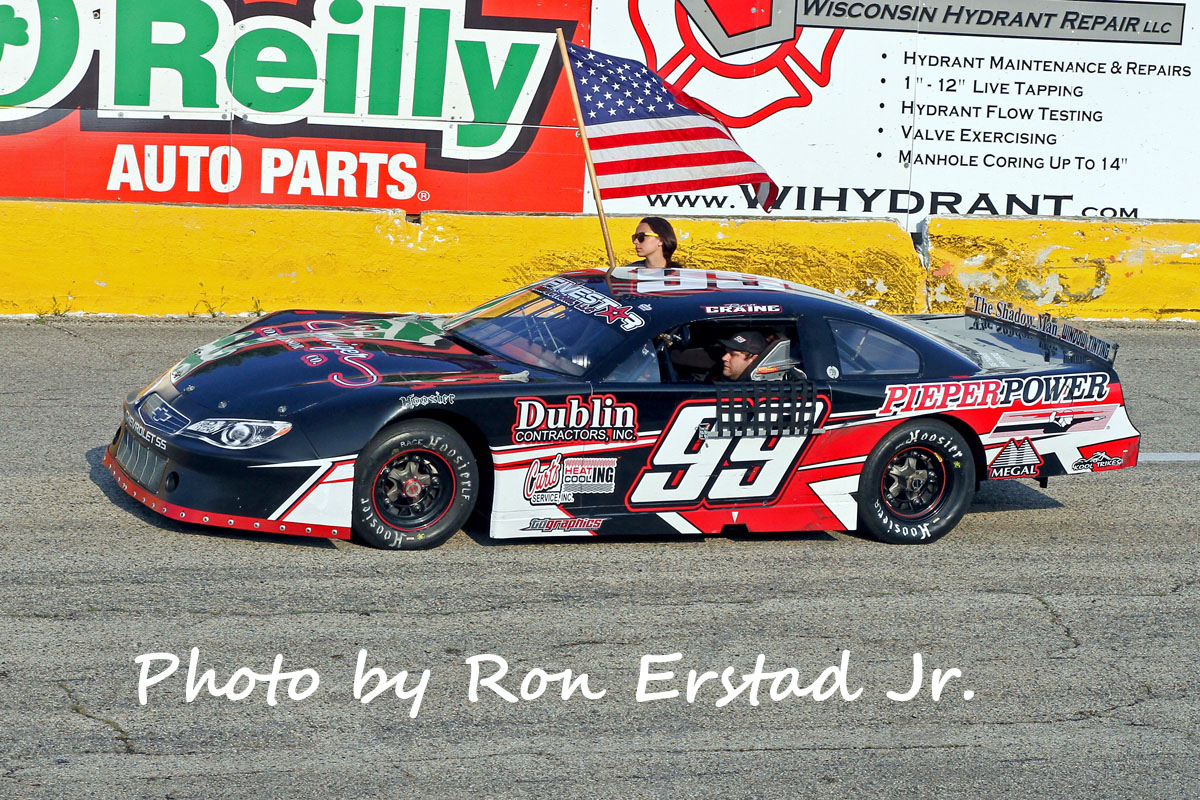 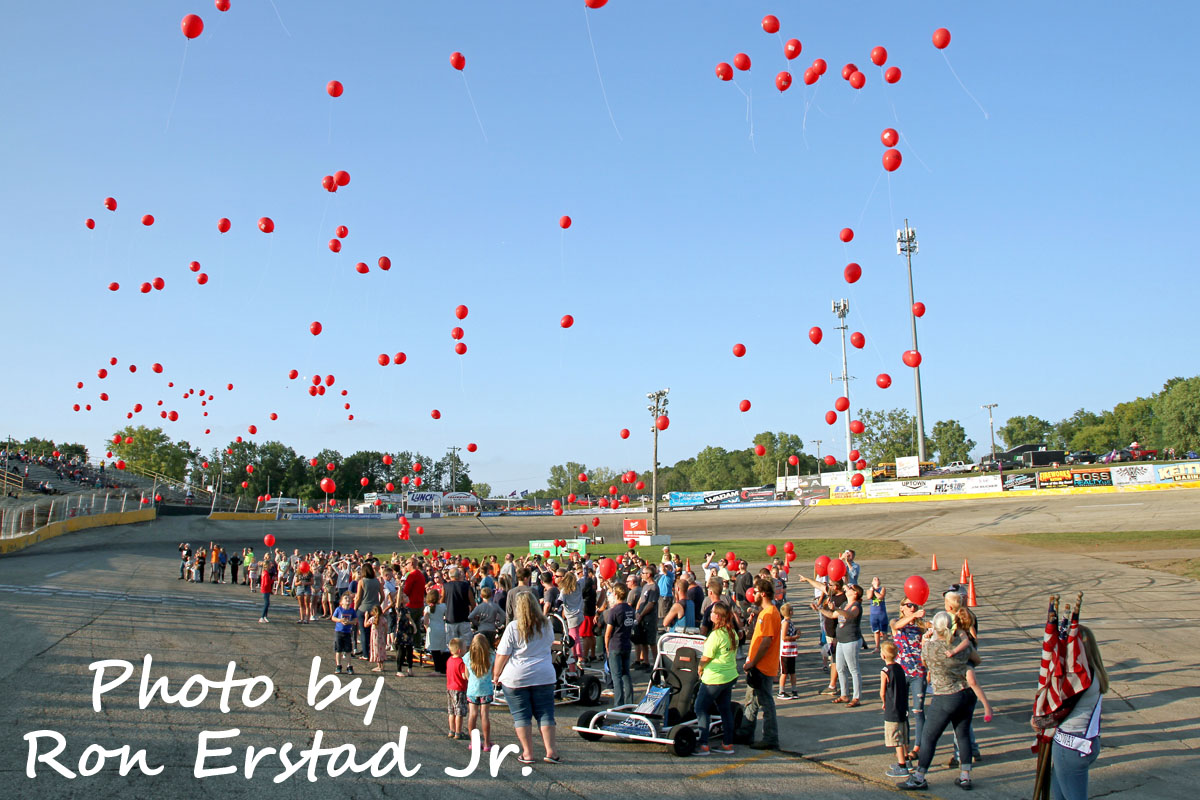 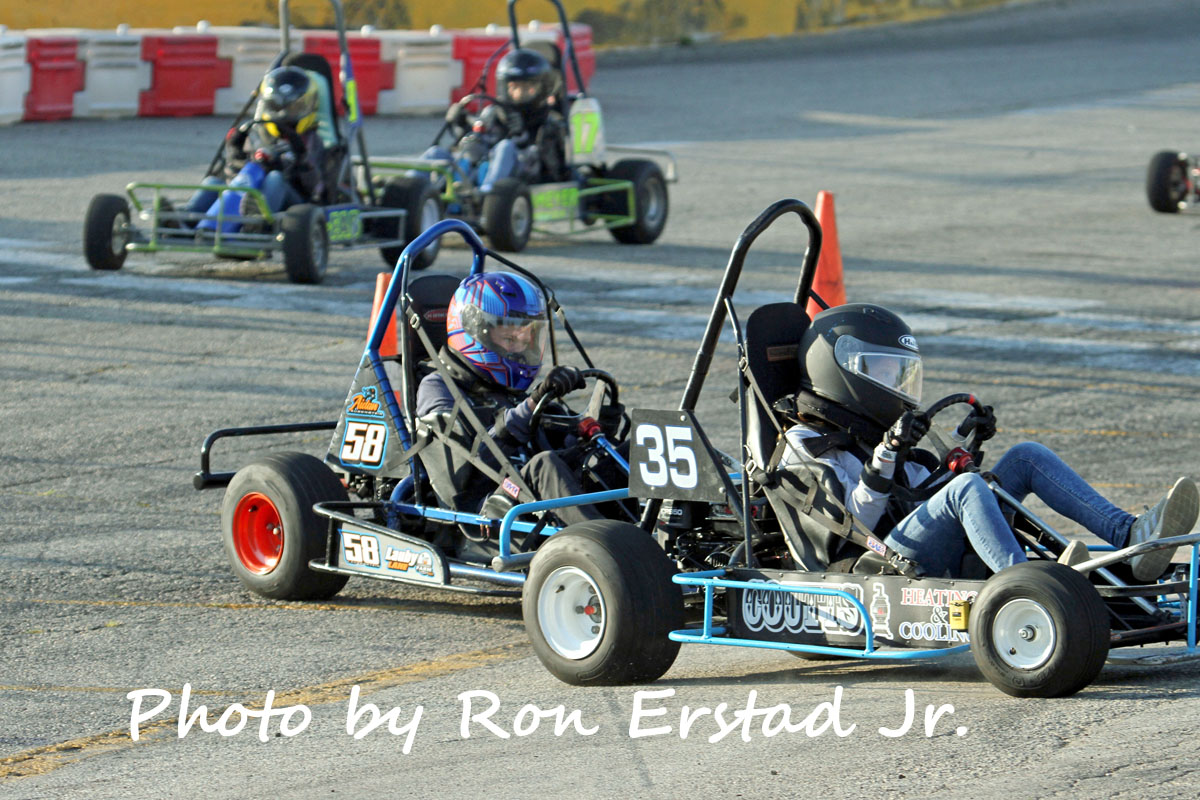