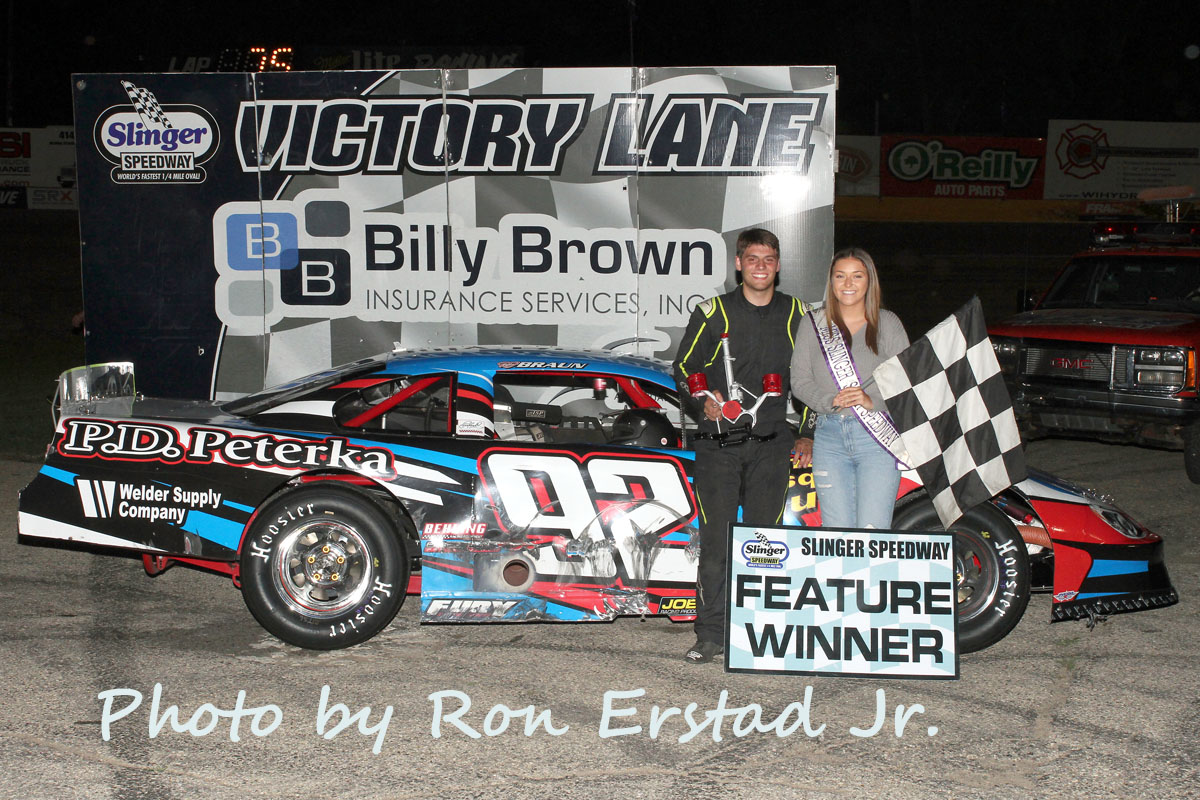 By Dan Margetta
Slinger, Wis., August 1— After being close many times this year, R.J. Braun finally broke through into the win column Sunday night at the Slinger Speedway as he won the 75-lap super late model main event over Ryan DeStefano and Luke Fenhaus.

“We were definitely close and I have to thank Ryan (DeStefano) for giving me a lane because it was a great race,” Braun stated from victory lane after racing side by side with DeStefano for nearly the entire race, “It’s definitely cool and I’ve been waiting a long time for this one.”

Braun ran the outer groove while DeStefano occupied the inside lane and the two of them battled door to door which left the third running Fenhaus with nowhere to go despite appearing to have a faster car at times. DeStefano looked like he would be able to ease ahead from the inside but each time Braun was able to keep his momentum up in the top lane and the two continued their side by side battle. In the closing laps, the racing between the leaders began to ramp up in intensity and despite a few minor scrapes, Braun remained committed to the outside and was able to take sole possession of the lead. Braun would not be denied at the finish and he was able to capture his first career super late model feature victory at Slinger. DeStefano barely edged Fenhaus for second place at the checkered flag while Steve Apel and Brad Keith rounded out the top five finishers.

“RJ ran a hell of a race,” DeStefano stated afterwards, “I told him though he’s lucky because any other driver would’ve given him the old ‘eight tires corner better than four” but I was nice. We were tight on the inside and he knew that which is why he took the outside. I wish the finish was different but we’re just going to keep digging.”

“It was just short track racing,” Fenhaus said after settling for third, “They (Braun and DeStefano) raced side by side and they raced clean. It was another front row finish but we’ll get better and work on our stuff and get better overall as a team. I’m happy we came home clean with a third place finish.”

Rich Loch finished in the sixth position followed by Jacob Nottestad who made his Slinger super late model debut with a seventh place result. Nick Wagner, Dave McCardle, and Rob Braun completed the top ten finishers. The race was delayed under the red flag following an incident on lap four in which several cars trying to occupy the same piece of real estate resulted in Rich Bickle’s car hitting the wall and riding the billboards in turn three. Bickle emerged from the incident uninjured but his car was heavily damaged and the race was delayed as repairs were made to the catch fencing. Despite the incident, Bickle was able to maintain his lead in the season championship point standings by just 24 points over Fenhaus and 32 points over R.J. Braun and Steve Apel.

Steve Apel was the winner of the super late model fast dash and Rich Bickle set fast time by blistering the speedway in 11.173 seconds.

Ryan Craine won the 40-lap late model feature over Jack Stern who advanced late in the race to finish second. Zach Prunty finished third just ahead of Ryan Gutknecht and Cole Thomas in fourth and fifth respectively. Ryan Craine also won a late model heat race while Jerry Eckhardt was the winner of the opening late model heat race. Jack Stern was the fastest qualifier with a lap at 12.004 seconds.
Justin Okruhlica made a late charge to win the 25-lap modified feature over Aaron Marthaler and Bill Tandetzke. Tyler Schley and Carl Benn finished fourth and fifth respectively. Bill Prietzel won the modified heat race and Justin Okruhlica was the fastest qualifier by completing a lap in 13.324 seconds.

Tom Elsinger won the 25-lap Slinger Bees feature over Ricky Gebhard and Misty Benn. Marty Tackes finished fourth and Brandon Tackes was fifth. Roman Blank and Brandon Tackes were the winners of the Slinger bees heat races and Jason Clope was the fastest qualifier with a lap time of 15.216 seconds.

Anna Price was the winner of the Bandolero 20-lap main event with Ayrton Brockhouse finishing second and Carter Nilson finishing third. Paxton Benz and Haylee Flairty rounded out the top five in fourth and fifth respectively. Axel Oldenhoff won a Bandolero heat race while Carter Nilson won the second heat race event. Lincoln Cain was the fastest qualifier with a lap of 14.700 seconds.

Scott Goetzke was the winner of the Figure 8 race to wrap up the night’s festivities. 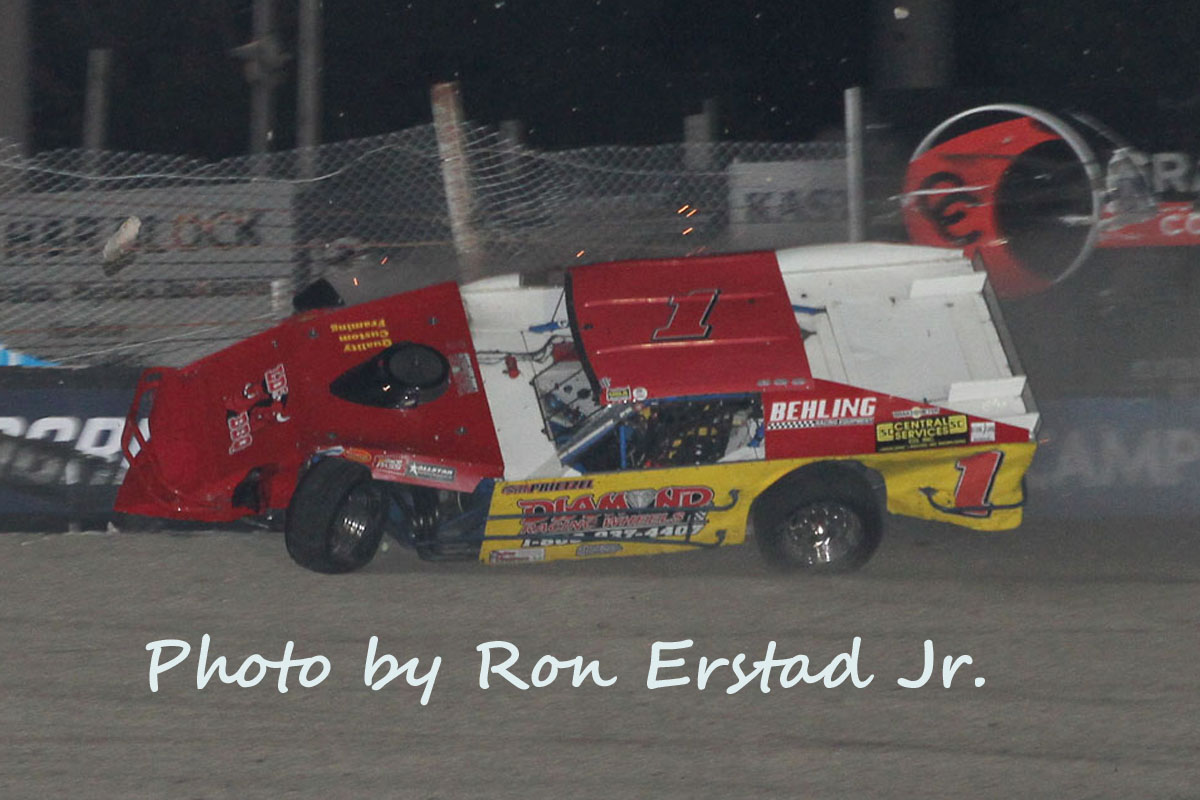 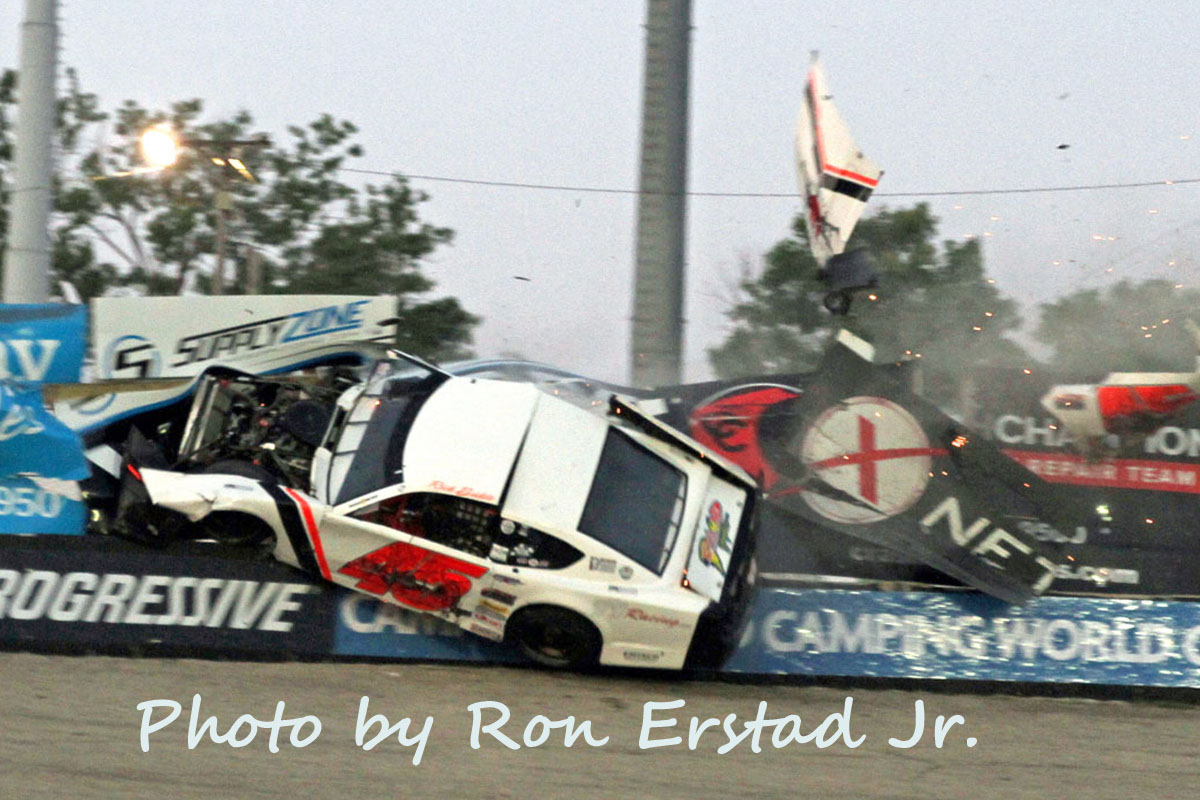 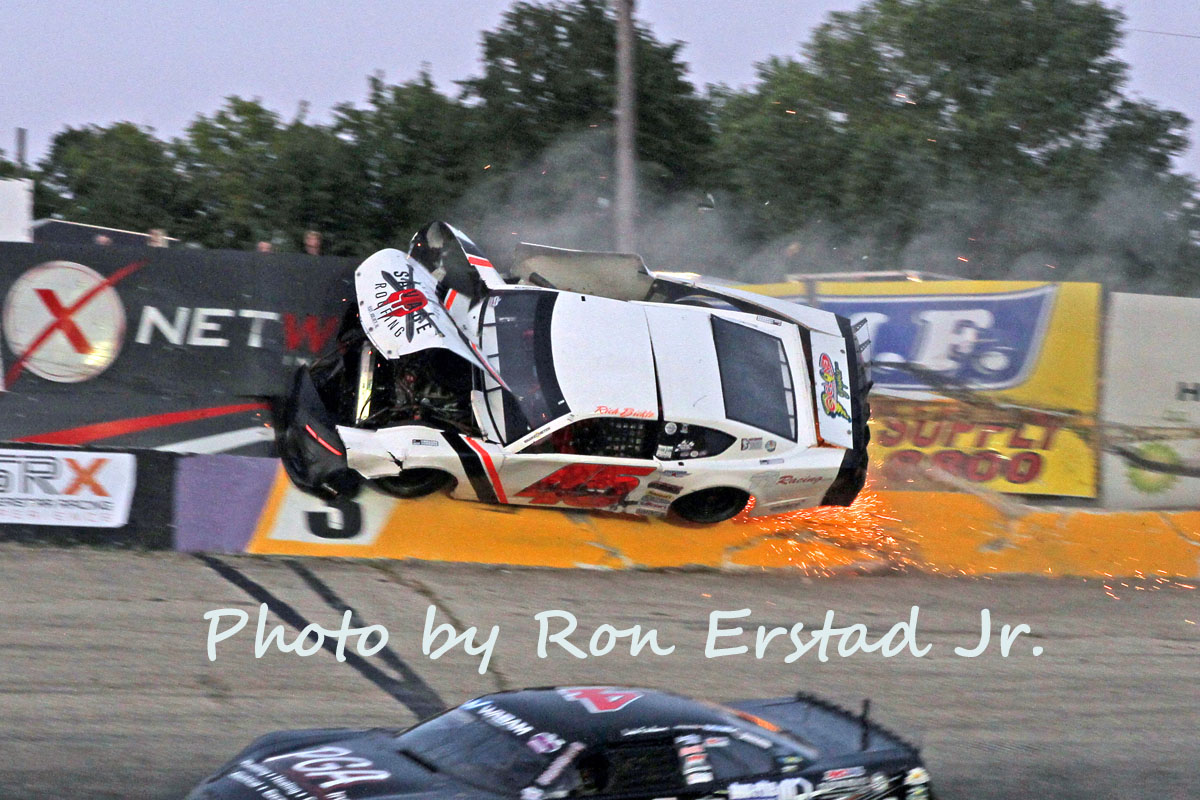 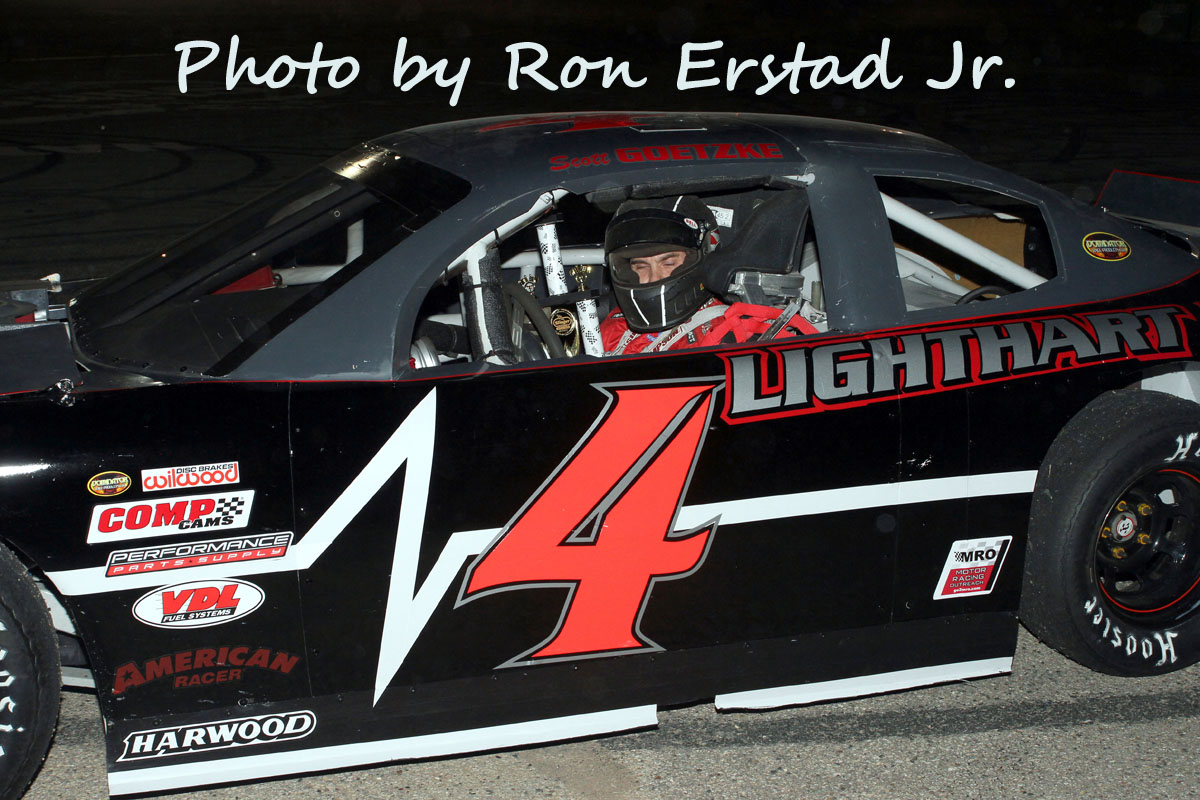 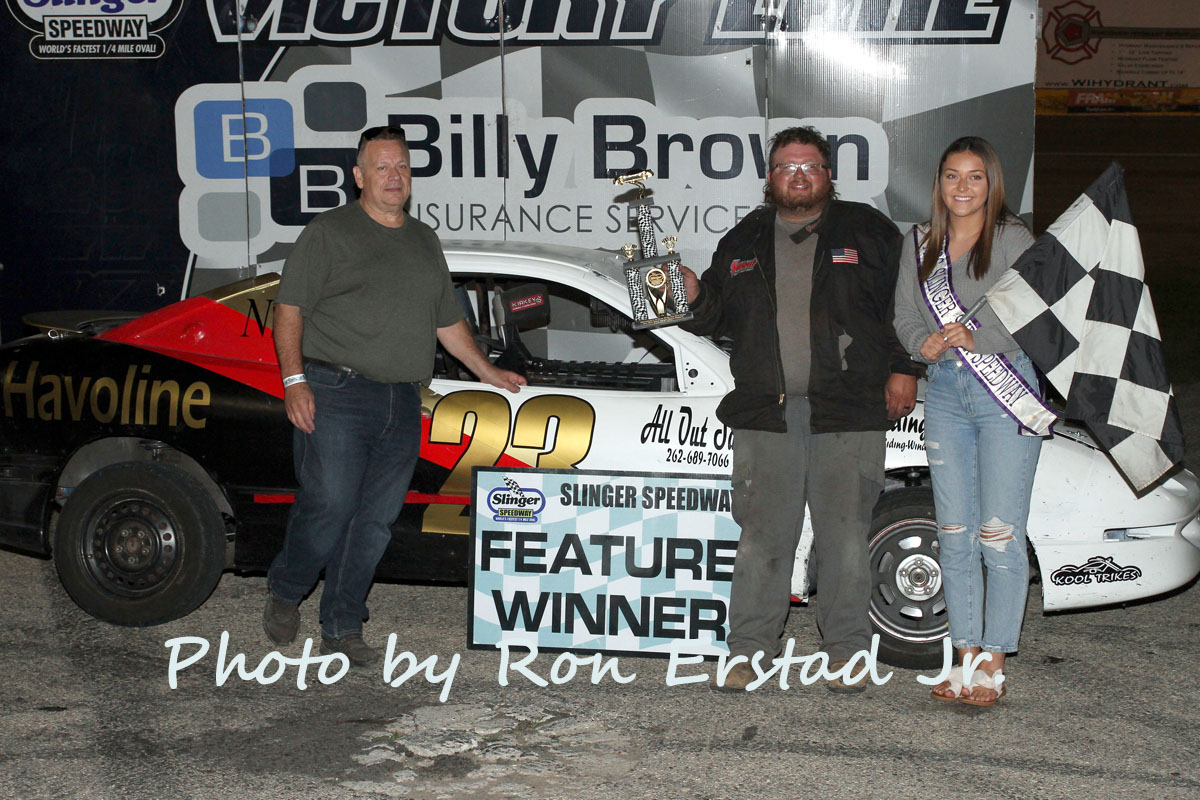 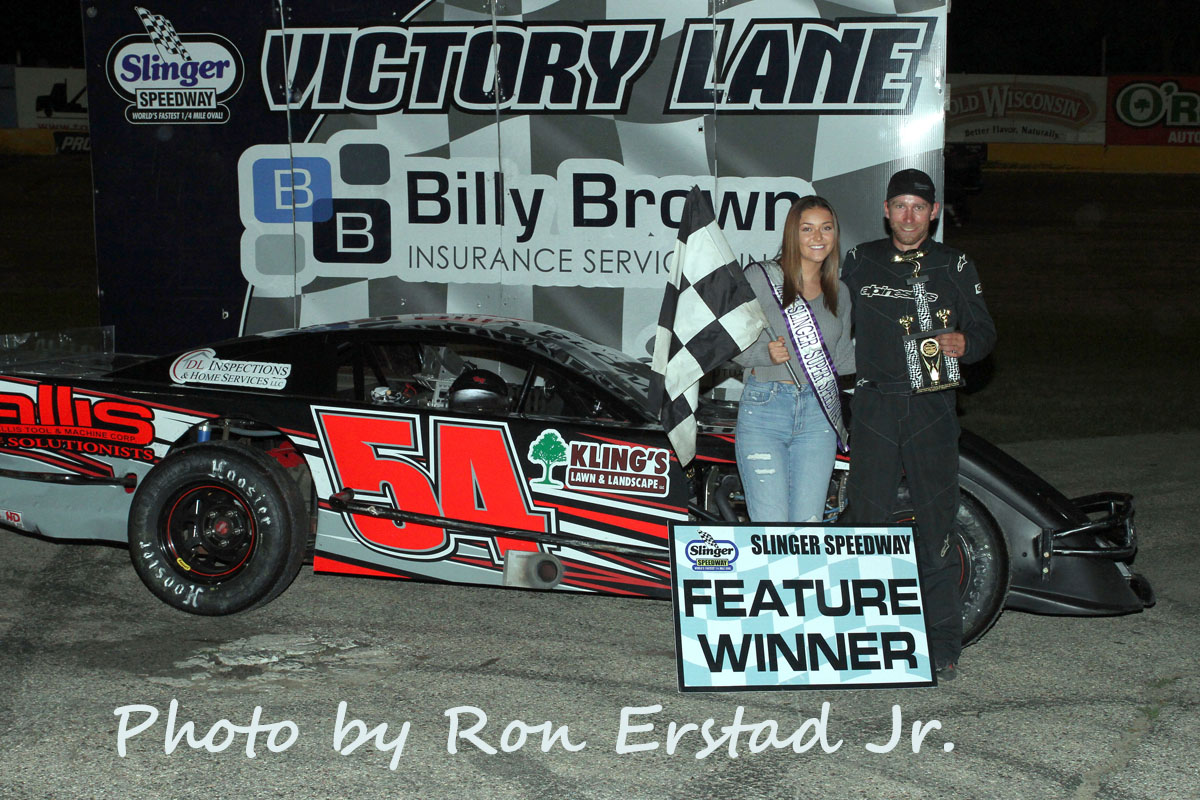 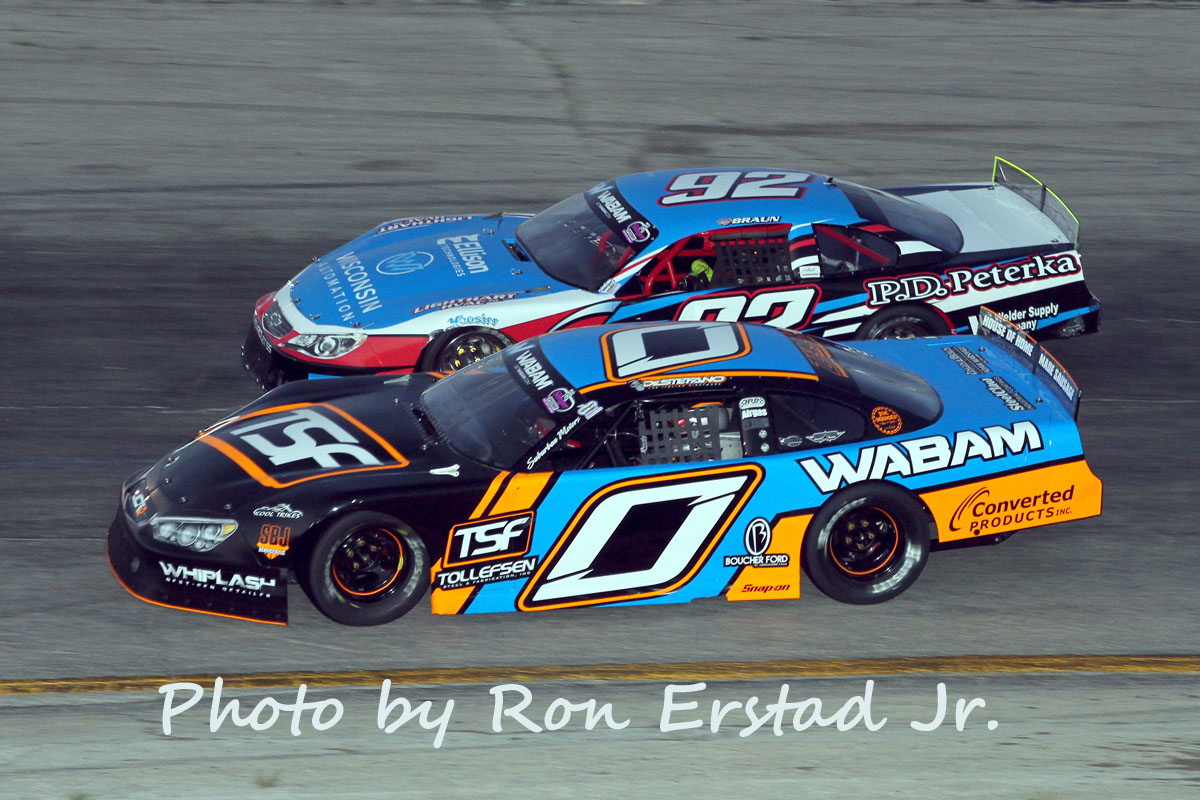 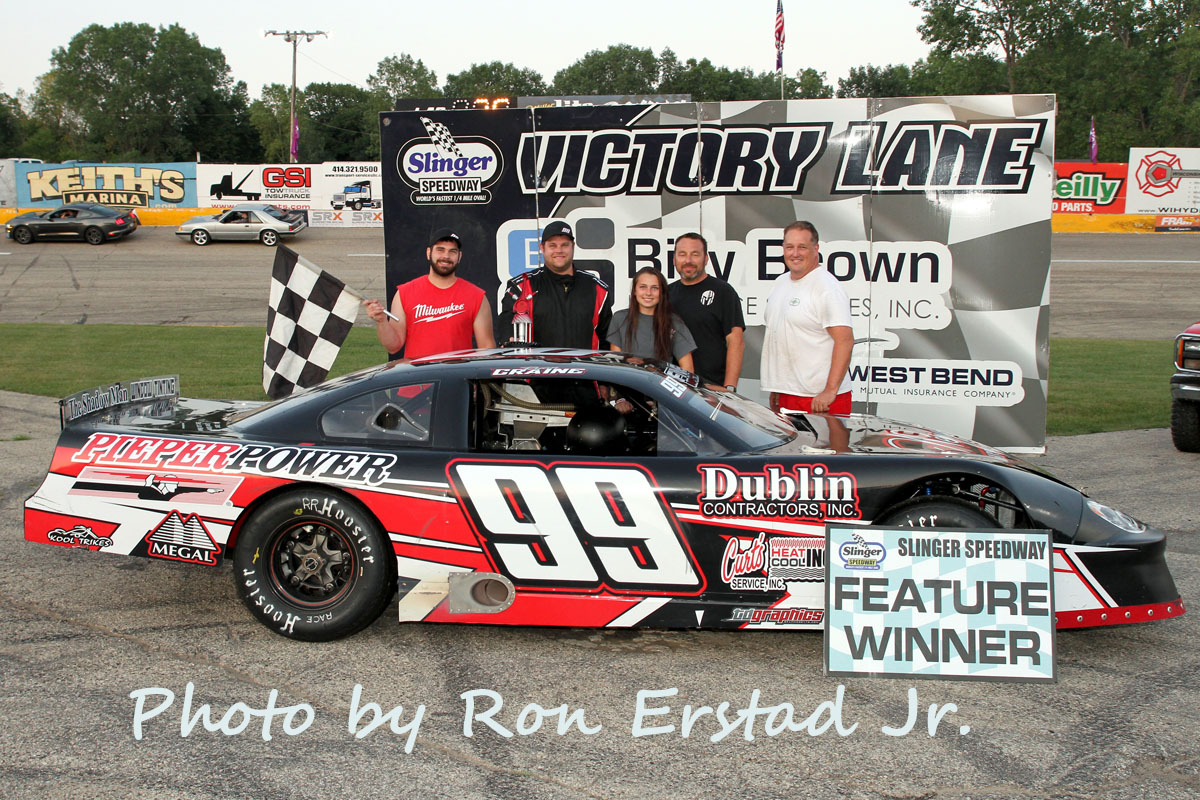 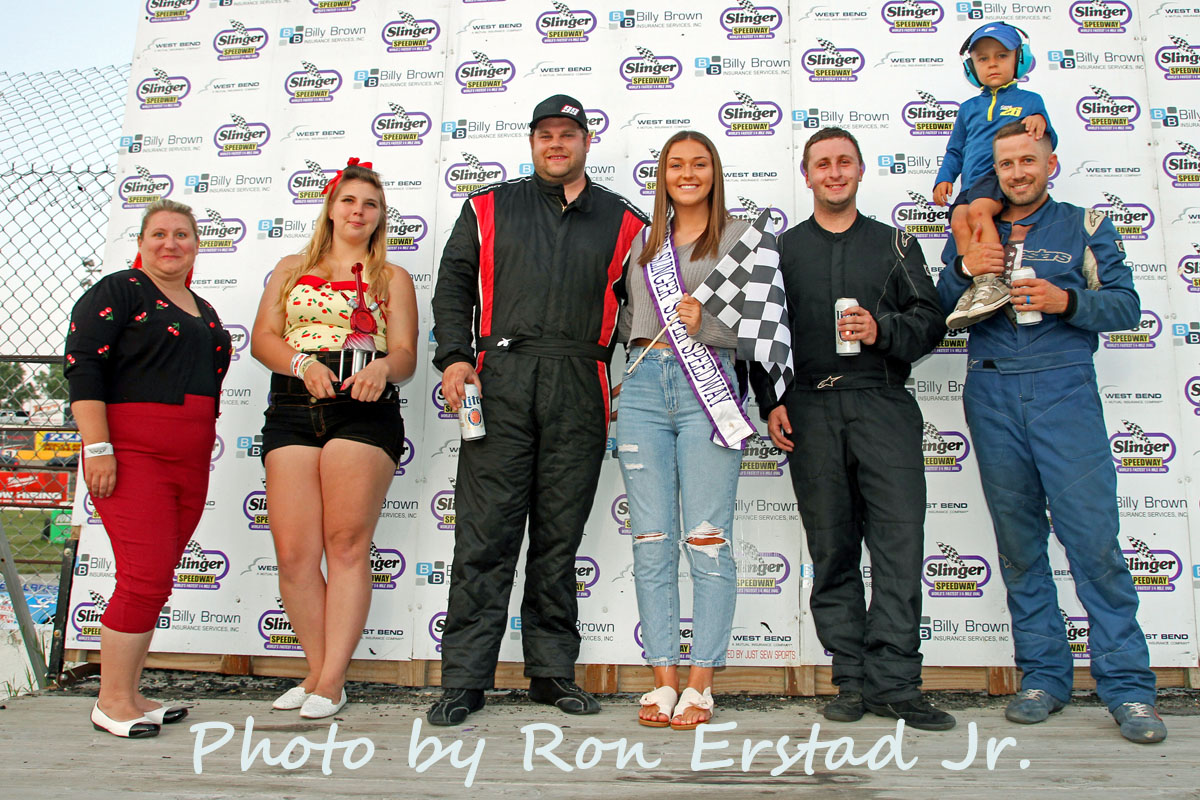 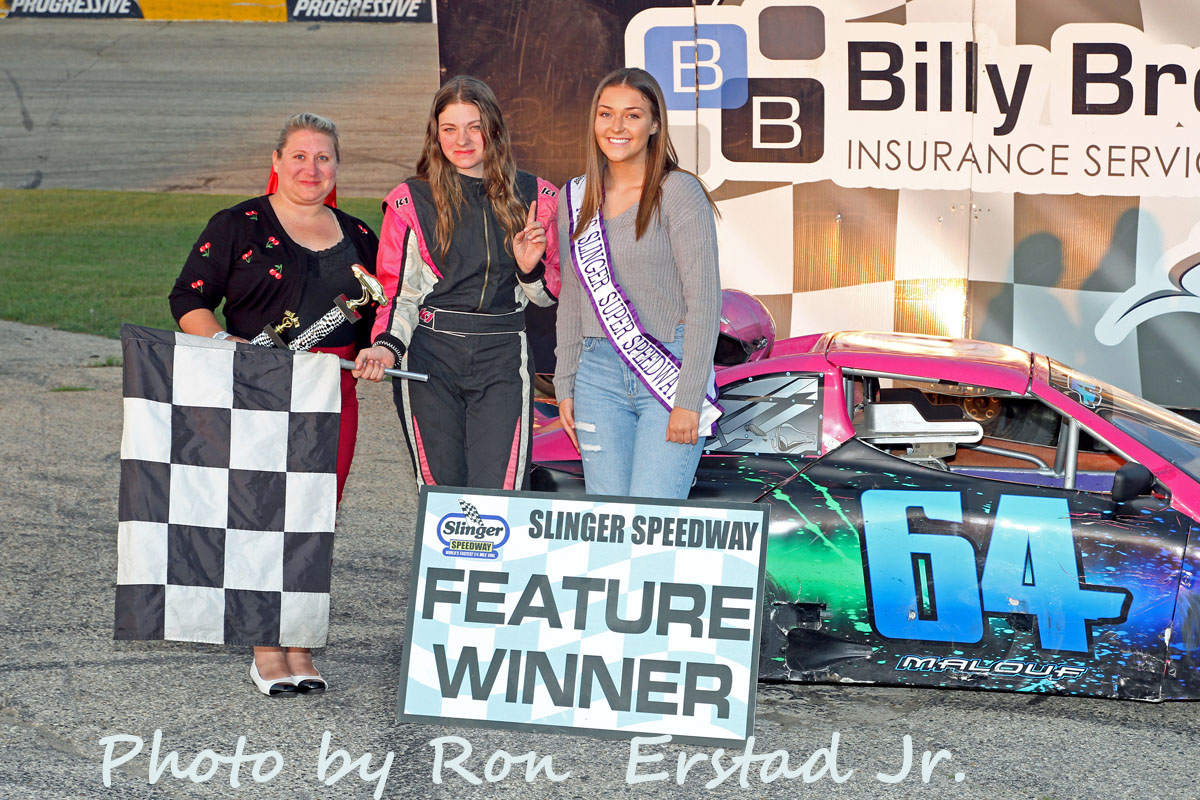 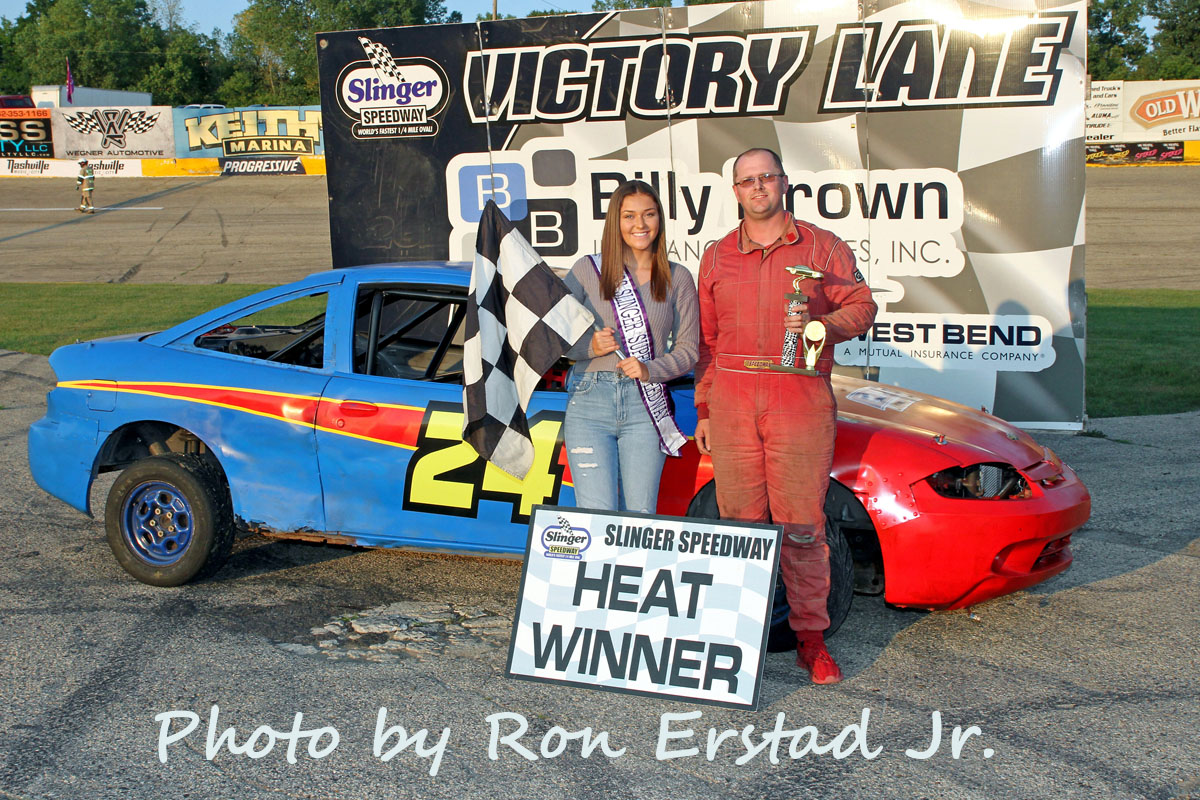 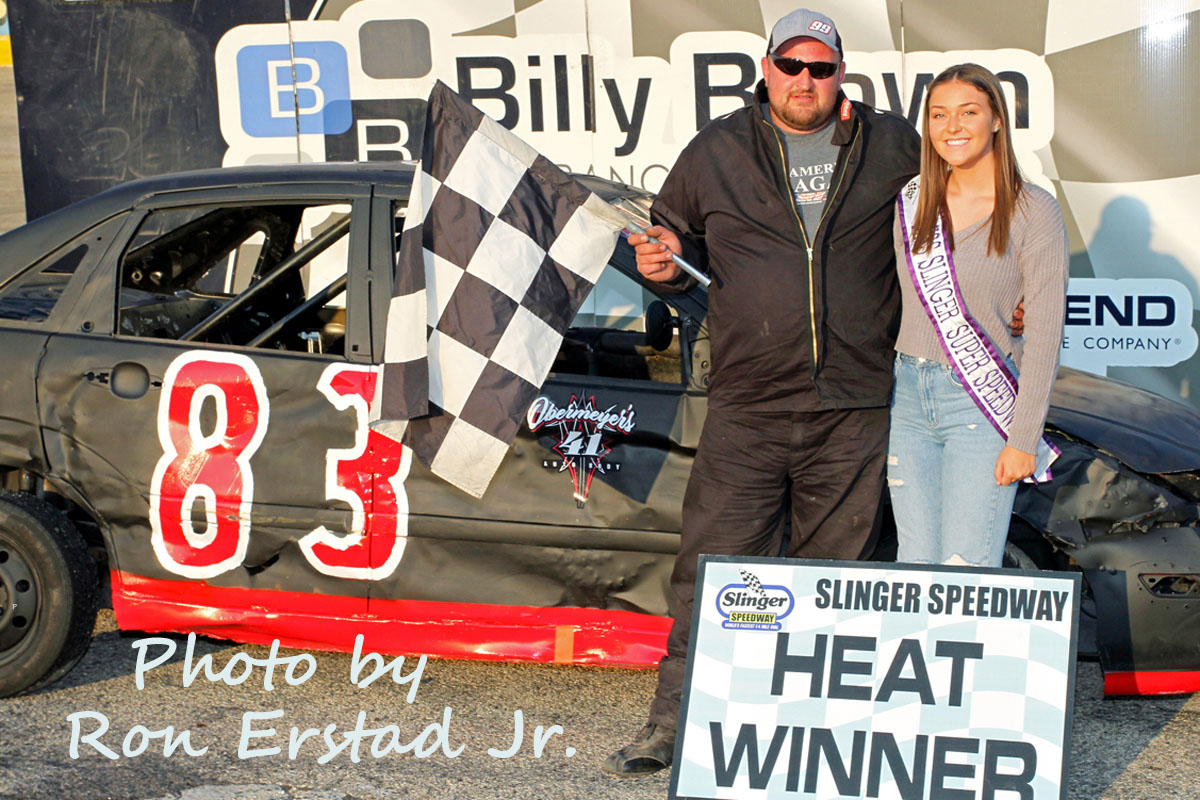 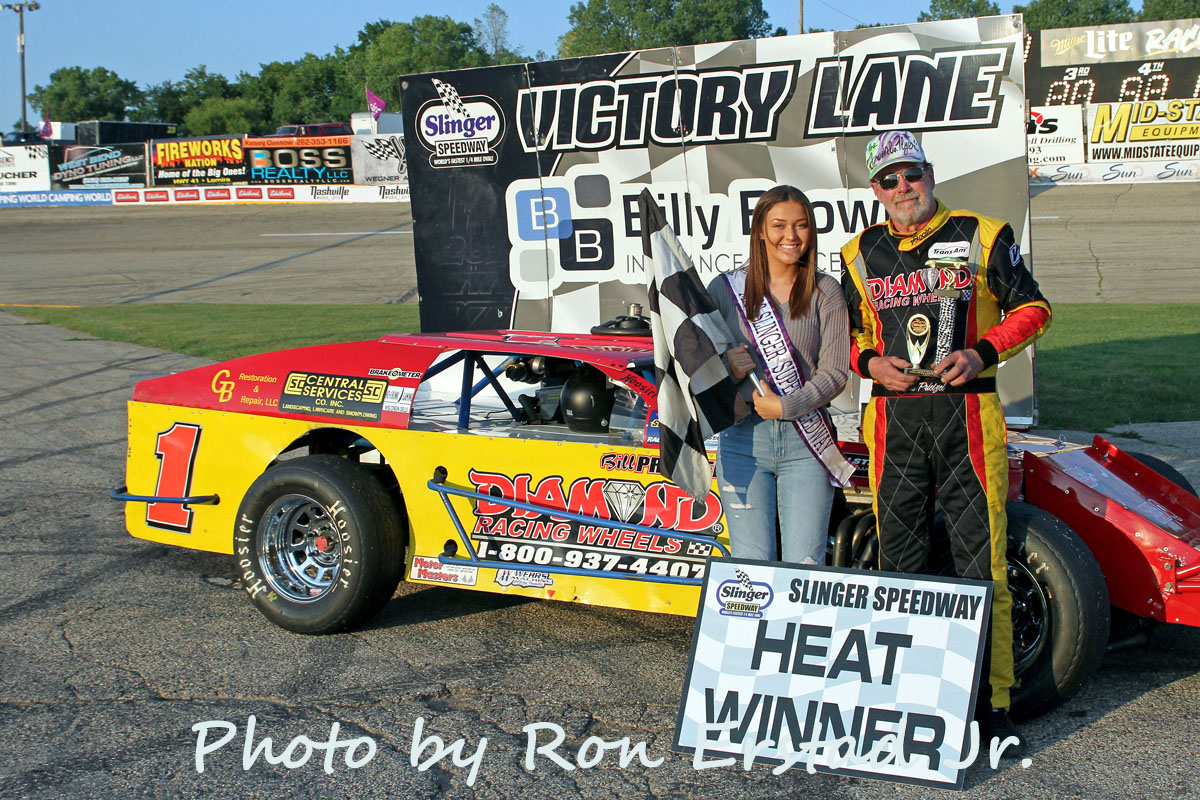 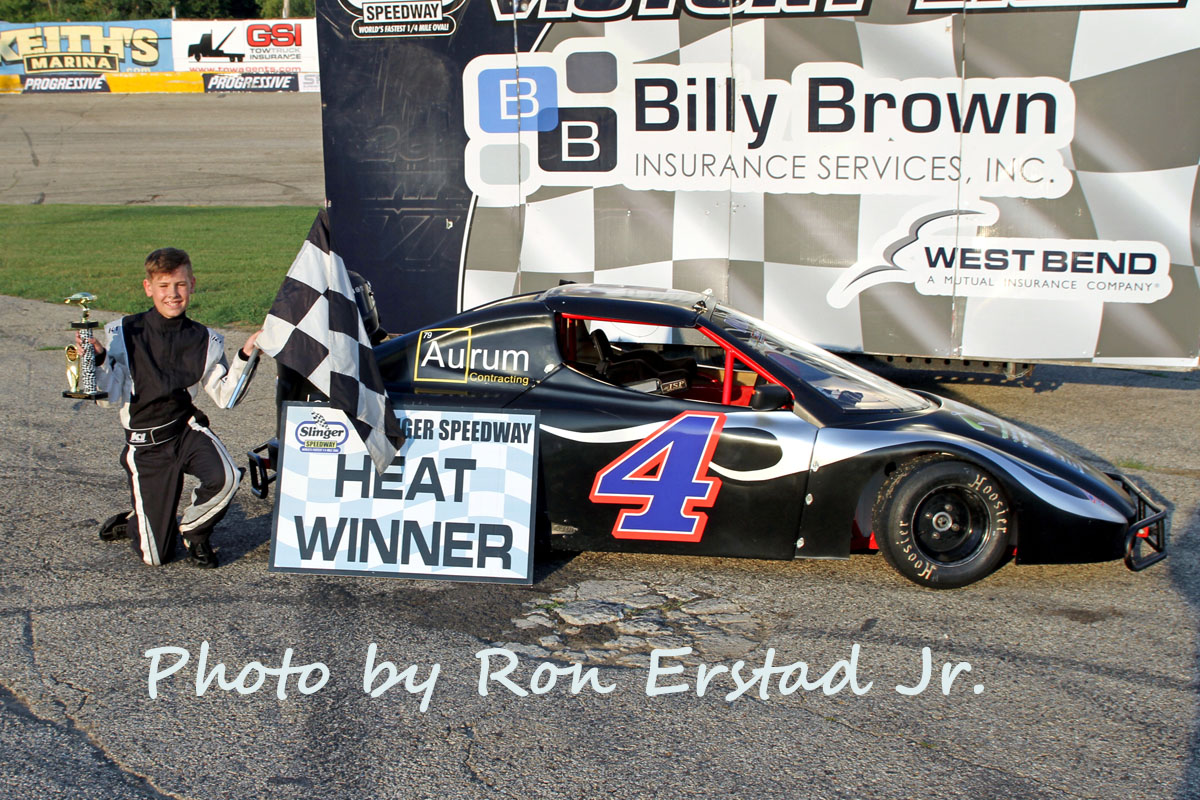 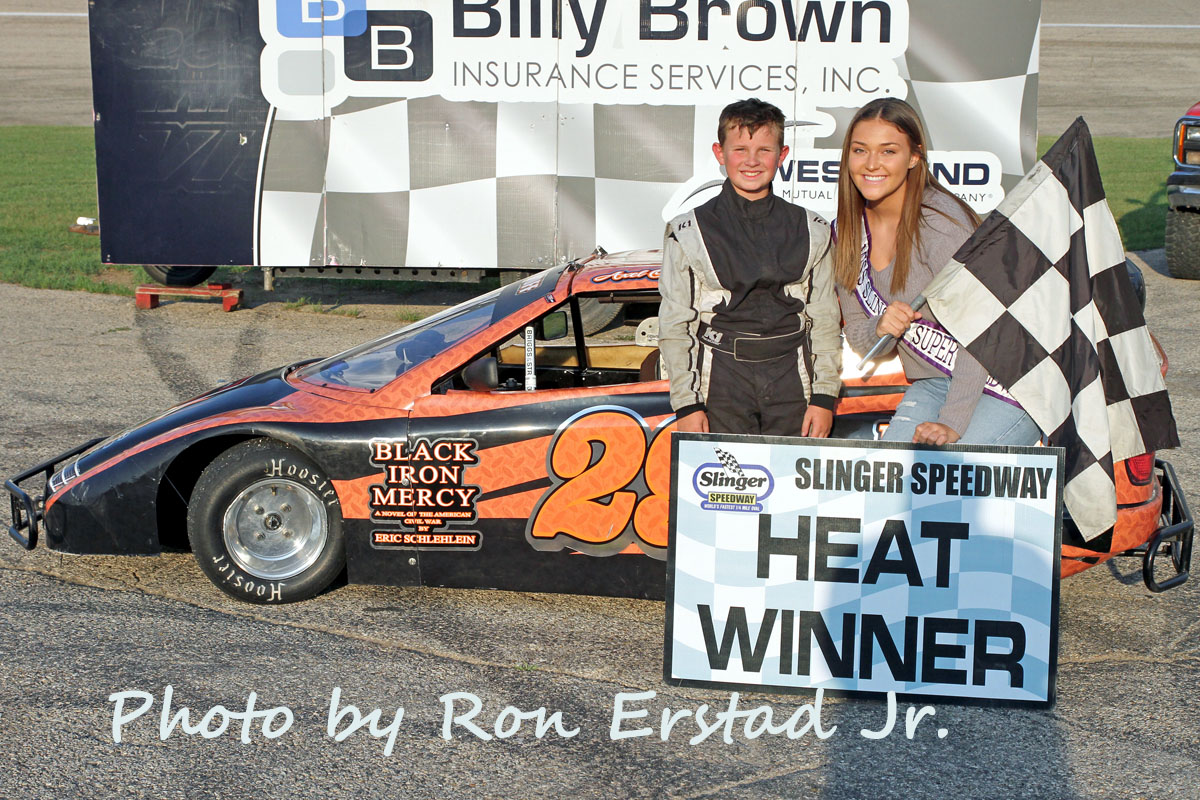 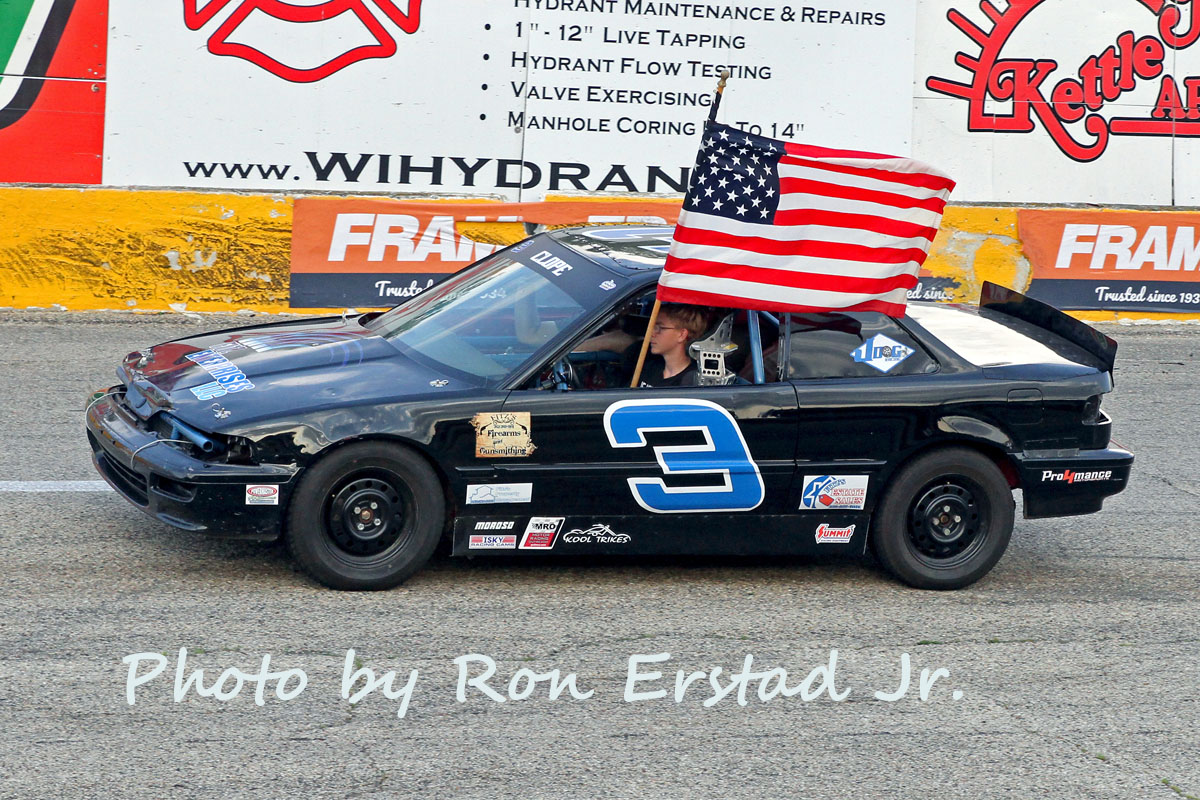 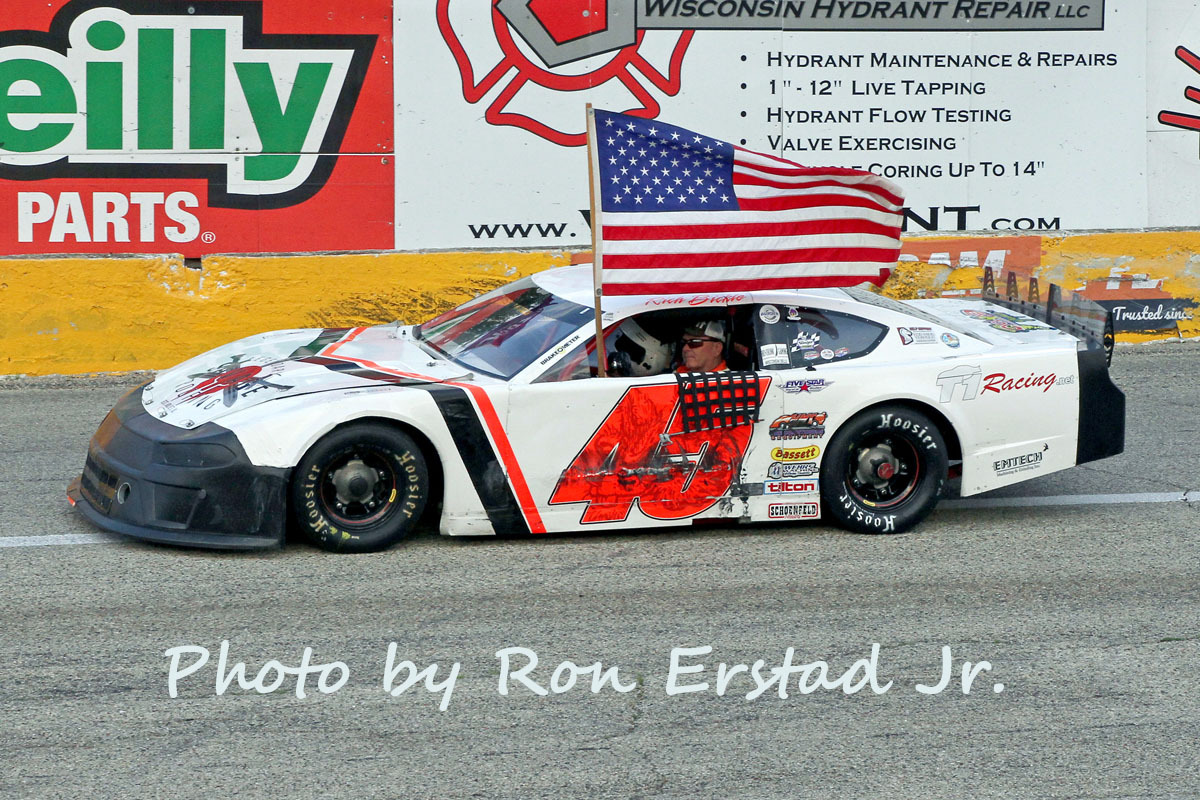 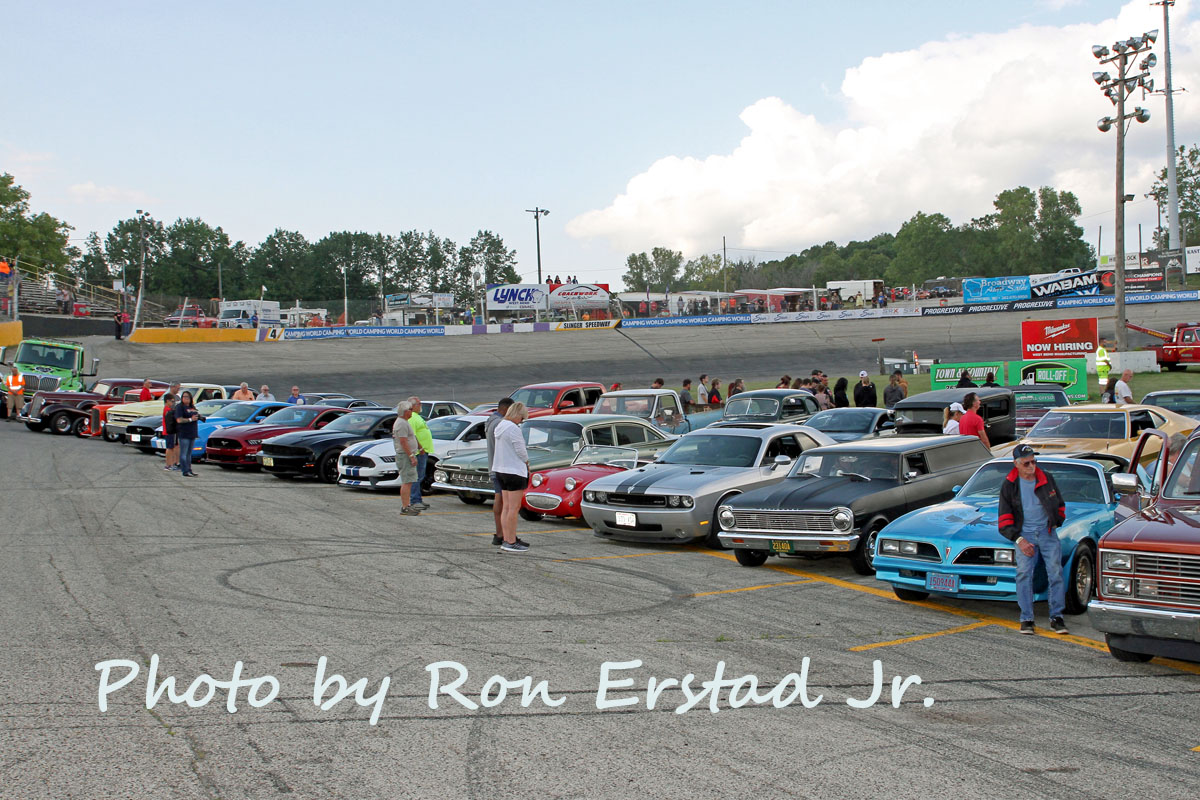