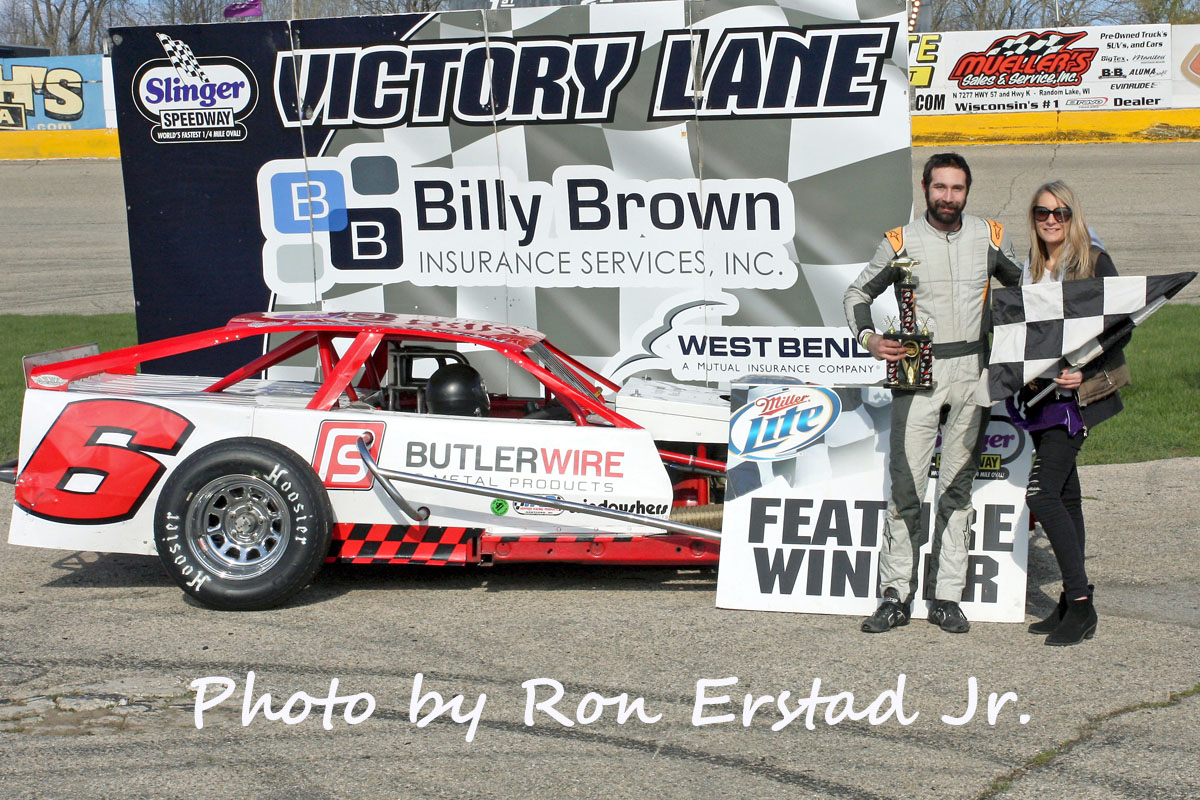 How did you get into racing?
To make a long story short, my dad coached Parker Klumb in football. After Parker was killed, Kathy Fies started the Memorial Go-Kart deal. At that point I wasn’t racing so dad got me involved in the go-kart. I did that for a few years. Then if my grades stayed up, we decided I could get a Slinger Bee. We ran that. And we kept moving up divisions after a couple of years and that’s how I’m at where I am in the Late Model.

What do you like about Slinger Super Speedway?
I like how the momentum is always there and how steep the banking is compared to any other track I’ve been to.

Who do you need to thank?
Crew: Dan Scholl, my dad (Tom), John Kruschel, Mike Sandholm, Ed & Matt Wilbert, Don Christenson. Sponsors: Butler Wire and Metal Products, Tom Schley Contracting Services, TTK Services, Truck and Auto Elegance, Hartford Wine and Spirits, Complete Home Solutions, and all my past sponsors that helped me get to where I’m at. Anyone else: Grandpa Tom, Great Uncle Ricky, Mom-Jane, Kelly, Miranda Sandholm, The Hromadka’s, The Egan’s, Jerry Eckhardt, and everybody that helped me through my years of frustration.

What is your real job?
I am a residential/commercial contractor/fixture setter, and I also do property maintenance on apartment buildings.

Your grandpa also raced at Slinger…
Grandpa Tom raced the Mods and a USAC car. That was the generation of racing with Alan Kulwicki and those guys. My Great-Uncle Ricky also raced a Modified; a lot of times they [Tom and Ricky] raced together. My dad got the storyline of he couldn’t race unless he could afford it. There wasn’t enough money back in the day for him to be able to race, so he helped his dad and Ricky.

What is your favorite racing memory at Slinger?
It would have to be my first year with Butler Wire as a sponsor and my first night out – didn’t even have the car wrapped yet. I qualified terribly, started 13th and passed a lot of guys on the outside; it was a 50-lap race that seemed like forever. I want to say around eight laps to go, I got on the radio and asked Ed, “How many more guys do I have to pass? Where am I at?” He said, “You got a couple of laps to go, just keep on going.” That was probably the most exciting win that I have ever had.

How did you get your car number (#6 in the Mod, #55 in the Late Model)?
#6 – Came with the car – it was Mike Sandholm’s number
#55 – The first Slinger Bee that I got already had that on. I kept everything the way it was, we just wanted to race more than make things look pretty.

You driving the first Mod race of 2021 came down to a coin flip…explain.
John Kruschel had planned to field two cars, but only one was ready. Mike Sandholm and I were both practicing it on the day before the Opener, and we both ended up with pretty close to identical times. So we were like, “What do we have to do to figure out who’s going to run tomorrow?” Mike said, “You run the car.” I said that he worked on it too, so he should run it. We flipped a coin, Mike chose, and I won. After the fact, Miranda (his daughter) told me that it was Mike’s birthday the next day. So we got a cake and everything else. I ended up actually winning the feature that night, which was good because it would have felt weird to take the car away after a coin flip on his birthday and not win.

Which Slinger driver (past or present) do you respect the most?
I would have to say I definitely respect Rich Bickle for all of the things he accomplished through the years, and the way he presents himself to a lot of the younger drivers. You’re able to go over and talk to him and he’s personable. I respect Luke Fenhaus for his ability to drive the wheels off the car and the respect he gives the older drivers as well. Those are the two that stick out the most.