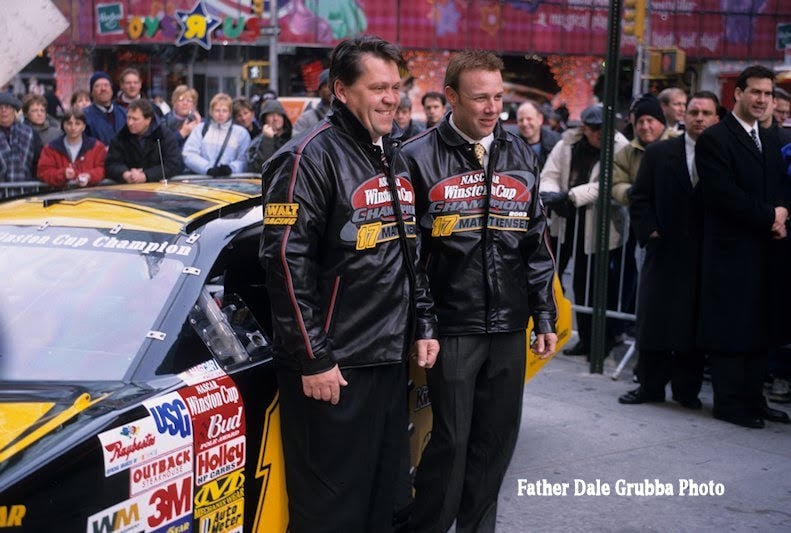 How did you get into racing?
My dad and my grandpa raced together in the Modifieds from 1958 to 1970 and then in 1971 they switched to Late Models. My dad was the ‘72 Cedarburg Track Champion and the ‘73 Hales Corners Track Champion. He ran Late Models until 1976 and actually the last two years he drove for the Mueller brothers out of Random Lake, which was Brad’s dad. [How did that transition to you driving…?] I was 16 years old and didn’t have an interest in driving or racing, but my dad was racing. I wrecked Roxanne’s [Robbie’s sister] Pinto on the way home from school one day and my dad made me fix the car. I was racing Bob Hart past Allenton Elementary coming home from high school. I was on the inside and he was on the outside. He got in the pea gravel and his Duster came around and clobbered me in the door. I had to go home and tell my dad that I wrecked my sister’s car. At that time he was doing pit work for the Mueller brothers and we were going to Trenton, New Jersey that night for a USAC race; I had to ride all the way out there with my dad…it was awful damn quiet. Anyway, Eugene Miller rolled his Pinto over that weekend and the only thing good on it was the door – and that’s what I needed. I bought the whole car from him for $150 and fixed the door on my sister’s car. Slinger started its season in 1980, I went to watch and they were racing mini-stocks – the first time they had mini-stocks on the track. So I went home and said, “Hey Dad, we got that car back there, what do you think we take the roof off of it and weld a set of rollbars in it?” So in 1981 I started racing based off of wrecking my sister’s car! [And how did your dad feel about that mini-stock idea…?] Oh, my dad was all about it. My mom hated every minute of it, but my dad was all about going racing. He never said to me, “Do you want to race?” until I said, “Hey, let’s do this”. Then he was in, but my dad never forced me into anything. [Then you transitioned to Super Late Models…?] I raced Mini Stock from ‘81 to ‘83, and then Late Models…you call them Super Lates now…from ‘84 to ‘93. We won the Track Championship in 1983 in the Mini Stocks and being from a Reiser family, you always have to be challenging yourself to the next thing. So the next thing was to go Late Model racing. We bought a used Late Model and in 1984 we started running it at Slinger.

What do you like about Slinger Super Speedway?
Well, it was eight miles away from the house…from Allenton. I grew up with my whole high school time going to Slinger High School, being around the racetrack, and being around a racing family so obviously Slinger was kind of in the blood, if you want to call it that. The biggest thing was that it was local, it was very competitive and a lot of local racers also ran there.

Who do you need to thank from your days racing at Slinger?
If you go back in time, I was very fortunate because everybody that worked on my racecars were kids I went to high school with: Dave Ritger, Ronnie Ritger, Tony Priesgen, Jerry Brost, Jeff Jossart, Russ Strupp. We all went to school together, we all played Little League together, and we raced together. Tony, Russ, and Dave were all a year ahead of me in school and Ronnie was a year behind me. If you looked at the radius of everybody, we probably lived about a mile apart. It was a great time, we had a great team, and we had a great sponsor in Bob Fish Pontiac, which was super local, and other sponsors like Triton Trailers-obviously my dad’s company, Wegner Automotive, Schlieper Racing Engines – they did a lot of stuff with my Mini Stock. There were a lot of local people involved with me because I was a local guy.

Speaking of those days, what were your hotspots when you were growing up?
Well there was Shoey’s Brown Jug, Steamers in Allenton, in Slinger you had Kirk’s Corners and Kathy and Willie’s. I was just a local guy at the local places; they were all probably within eight miles of where I lived.

You are retired now, how is that going?
I don’t go to work every day for a company, now I go to work every day for three boys. Reid started his own landscape business and he keeps me awfully busy with maintenance and “Dad, I need this…Dad, I need that.” Ryan went to Virginia Tech, graduated as a mechanical engineer, and moved to South Carolina. But, he has a drag truck up here that we have been building, so he comes up every weekend and we spend our weekends getting that drag truck ready to go. Rhett was dirt bike racing, but he’s kind of backed off of that the last six months and gotten serious about running equipment at a construction company and he will graduate in December with a civil engineering degree. So Rhett’s a little less maintenance than the other two, but they all keep me pretty damn busy. Plus, I have some land that I recently built living quarters on, and I have a shop with things to do. I retired in July, and I’ve been busier these last four months than I have been in the last year.

When you return to Wisconsin, where are the must-gos?
There are four guys from high school that are always around; we always get together at Christmas time. My background is I love to hunt. Those four guys like to hunt, so we do a lot of things together. A couple of years ago we went out to New Mexico elk hunting and had a great time. So at Christmas time I always end up at Wild Wings or a place like that and we go pheasant hunting. Then they usually take me to some place local. I always get a Friday Night Fish Fry when I come up. That’s something I really, really miss. I miss Wisconsin…the four seasons, and the people.

What is your favorite racing memory at Slinger?
I would say probably my first Mini Stock win. It was something I never thought I’d win so that would be one of my bigger highlights. Obviously, winning the Track Championships was big, but I think my first win in the Mini Stock was a pretty big memory. I passed Doug Bandl on the last lap coming to the checkered flag because there was lapped traffic in the way. We slammed doors all the way across the finish line and I won the race by about 6”. I was a senior in high school, and I remember going to school the next day and not even thinking that anyone went to the racetrack. But, SO many people came up and congratulated me on winning the race. I guess I remember that because it was kind of the start. That’s what kept me racing. Once I got a little taste of that, then I wanted to win all the time.

If you could have dinner with any three people (alive or passed), who would they be?
I’m a family guy so it would be my dad, Grandpa Elmer and Grandma Veronica.

Which Slinger driver (past or present) do you respect the most?
I think that when I grew up racing we were very fortunate to race against a lot of great racers. We raced four or five nights a week at that time and you met all kinds of different people. You raced different tracks with different drivers. I don’t think that I really have a standout driver because there were so many good ones out there that you raced with. Your friendships were more than just one other driver. If I had to pick a driver from the past, I’d pick my dad. My dad raced at Slinger, at Hales Corners, and he was my mentor; he was the guy who kept me out of trouble. When I was in trouble, he got me out of it and he was the one who tried to keep me out of it when I didn’t know any better.. A lot of the guys I grew up racing with at Slinger knew I didn’t know any better. There were a lot of guys who wanted to rip my head off half the time when I was there, but didn’t and gave me an opportunity to grow up. In a lot of cases, I didn’t have a lot of talent, but I think my desire and determination was big and a lot of guys helped me get through that. There were so many good guys that I don’t have one particular person that stands out. There were so many people that helped, from drivers to those type of people who helped me learn. I credit them all. 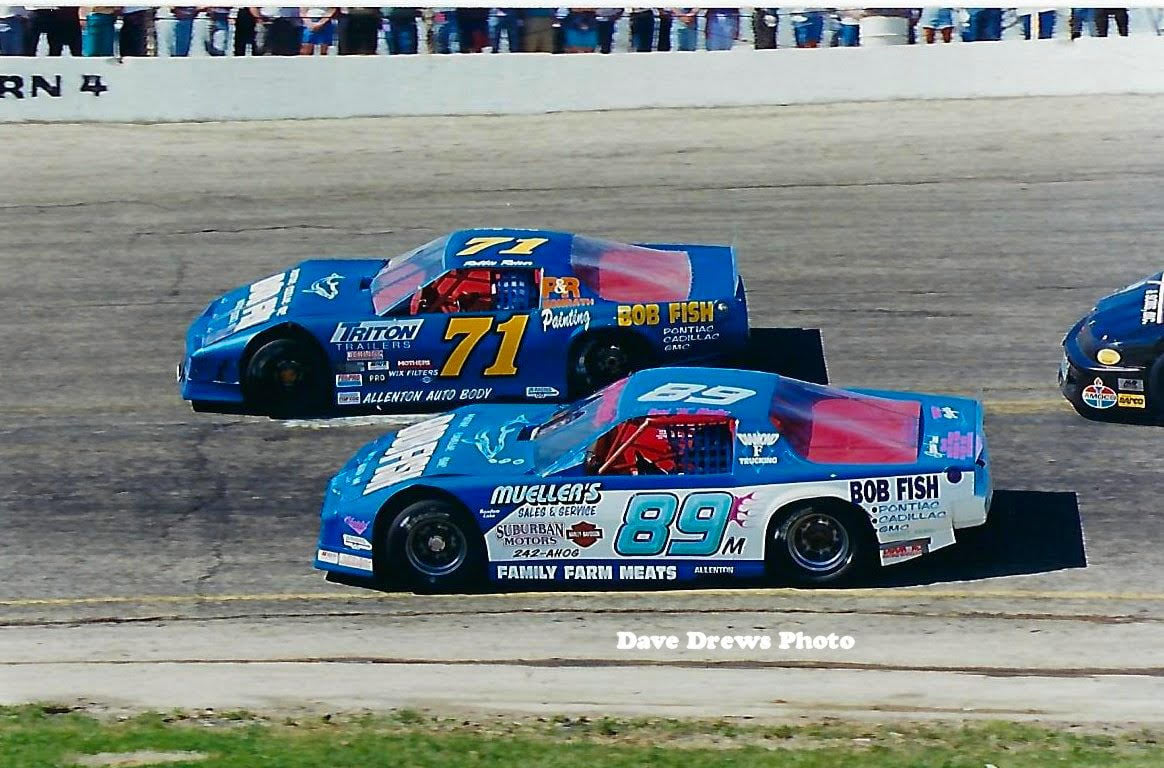