How did you get into racing?
I’ve really grown up watching racing quite a bit. My dad didn’t race when I was kid, but he raced right out of high school and then he quit to go on the road working. So I kind of had a little bit of ties racing growing up, and then my uncle sponsored Bobby Wilberg so we’d go to Madison a lot to watch. My grandpa was a big dirt midget fan, so I’d go with him to Angell Park quite a bit as well. After that I guess I just begged for a go-kart long enough, and when I was 12 we started go-kart racing

Is this your first time racing at slinger?
First time in a big car. I raced a Legend car there once. I believe I finished 4th or 5th, qualified in the top 5 – there was a good field of 25 Legend cars there that night. [Do you remember how it felt the first time you hit the track at Slinger?] Yea, I’ve never really been on anything close to the banking of that. It’s just crazy how even the backstretch is banked more than most of the tracks we go to in the corners, so it’s really a different feeling, but it’s a lot of fun once you get up to speed.

We’ve seen you at Slinger in the pits quite a bit, though. Who have you helped out?
I’ve crewed for a couple different people. I’m buddies with Zach Braun, so I’ve helped him with his Late Model there weekly for the last couple of years on and off. I was on the crew for Matt Kenseth when he won the Nationals in, I think, 2019. Then the last couple of years I’ve been helping Ty Majeski at Nationals. [Those are some impressive connections…how did that come about?] With Matt I was helping the Pathfinder house car and with Ty, I’ve been friends with him now for the last five years or somewhere in there. We met racing in iRacing and from there became friends in real life. I’ve started driving some of their chassis now and we’ve been working together for the last couple of years.

What do you like about Slinger Super Speedway?
Definitely just how up on the wheel you have to be. There really isn’t anything like it, you don’t have time to rest. It really is a driver’s race track.

Who do you need to thank?
Crew: In the shop pretty much it’s me and my dad and we have a couple of others who come to the shop. Then at the track it’s myself, my dad, my spotter Brian Tedeschi, my tire guy Randy Teigen, my buddy Cade Watters comes to help, and my Uncle Ross comes to help too. It’s a smaller crew, but then I bring in a couple of people to help now and again. Sponsors: Kulwicki Driver Development Program, Screamin’ Norwegian, Hausz Contractors, Direct Networks, Hougan Farms, Stenjem Construction, Utica Bar, Brown Heating and Air Conditioning, Kurt’s Welding, D and D Olson Farms, Deerfield Pistol Range, EPYK Media, Two Sisters Inc., Tom Gullickson Inc., Performance Parts Supply, Lefthander Chassis, Toby Race Products, FRS Shocks, Wegner Automotive. Anyone else: My parents, Randy and Debbie, they’ve been supportive of me racing over the last ten years. We pretty much do it every weekend all summer long, so they’ve invested a lot of time and effort into helping me move up the ranks racing and I couldn’t do it without them.

What is your real job?
I’m currently a full time student at Milwaukee School of Engineering. I’m going to graduate in November with a mechanical engineering degree. [What type of job will you be looking for after graduation?] I’d like to work in the racing industry in some capacity, that’s why I went to engineering school. That’s kind of the generally accepted engineering degree when you want to be a crew chief or engineer in NASCAR. I think that would be kind of cool

How did you get your car number (#77)?
That was my dad’s number when he raced for the 4-5 years in mini-stocks at Jefferson.

Which Slinger driver (past or present) do you respect the most?
Alan Kulwicki- In his time Alan went about things in his own way, and it worked for him. He was ahead of his time, applying a mechanical engineering degree to racing. He didn’t care that he was different than his peers and he believed in himself and doing things his way. It took him to the highest levels of racing and I really respect the way he carried himself.

Tell us how the KDDP application process works.
I’ve applied the last, I believe, four years, and I was a semi-finalist the last three years. This is the first year being a finalist. You start out by submitting a Google form; it’s just a short ten-questions with paragraph responses. I’ve heard they receive over 100 applicants, and they pick 15 semi-finalists out of those. After that you have to send in a letter of recommendation and they do 30-minute phone interviews with each of those finalists. Then they pick seven of those, and give them a $7,777 stipend to start the year. Throughout the year you chase the Kulwicki Cup to win seven times that $7,777. You score points against the other drivers in the program who are across North America, you don’t really need to race against them. They take your fifteen best on-track finishes, there are some discretionary points by the board members, and then they also vote based off of community service, community engagement, and promoting Alan’s legacy. [What is your community service of choice?] I will be raising money benefiting the Greatest Need Fund at the American Family Children’s Hospital in Madison. Also this year I am working with young Bandolero drivers; I’m going to be mentoring two drivers in the Future Legends program through Legends Direct. They are going to be competing in a program kind of similar to the Kulwicki program, but it’s for free arrive and drives in a Legend car next, compliments of Legends Direct. 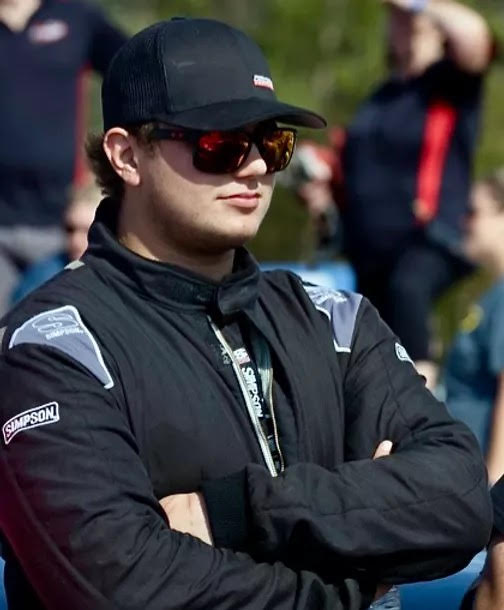