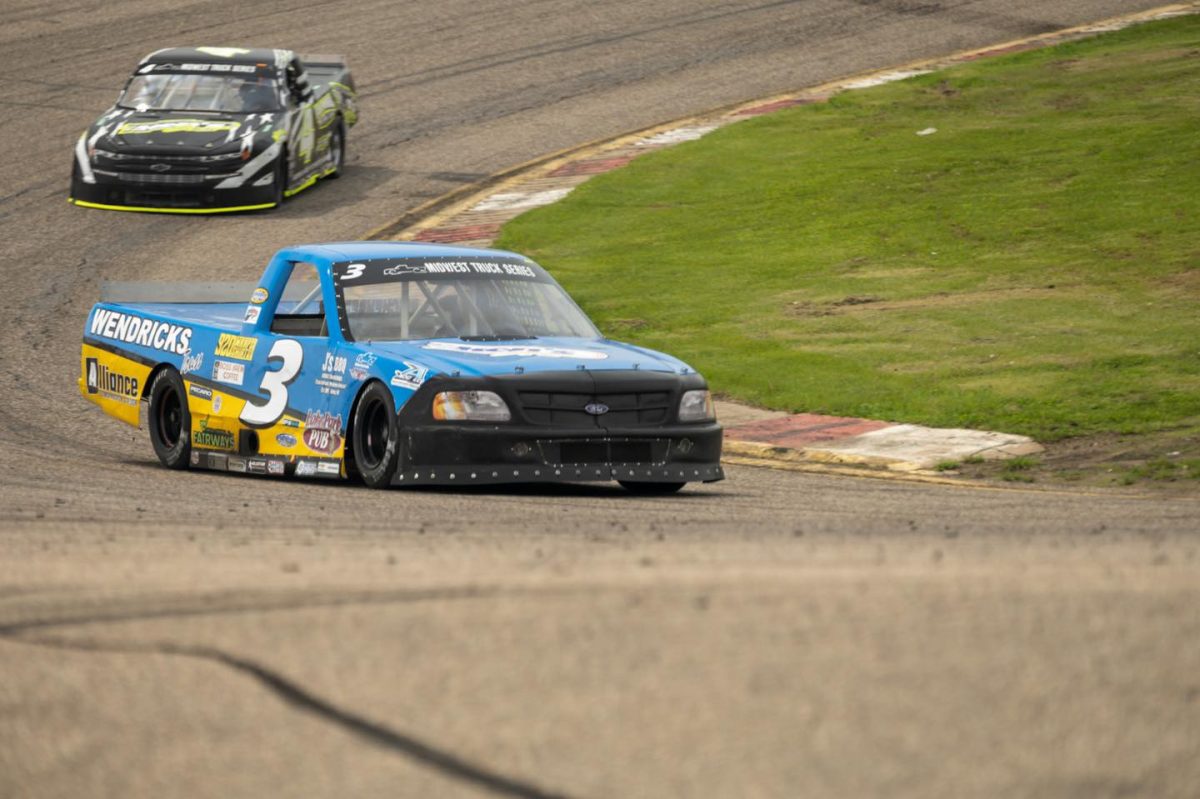 Midwest Truck Series Driver returning to Slinger Speedway this Sunday for the first time in 27 years!

How did you get into racing?
I got into racing because of my dad; he was doing it and I fell in love with it. Forty-three years later I am still doing it. I am not that old, lol. I Started at 15; Slinger was my very first race. My last race at slinger was 27 years ago, 1995. I drove the 96.5 WKLH radio sponsored car owned by Gary Borher.

Who do you need to thank?
I have 43 years of people to thank, I have been so blessed my whole career. I would have never ever been able to do what I am doing to this day without everyone who has helped (either in the pits, or sponsorship, car owners AND fans) me along the way. I don’t want to start a list as it would never end nor do I want to forget ANYONE. The people that have helped me know who you are and I want to say THANK YOU for everything!

What is your real job?
I have been in the engineering department at Mercury Marine for 39 years, and I am going to retire this year.

Do you have any pre-race traditions/superstitions/foods/etc
I really don’t have any, the only thing is preparation. Prior to a race, I like to get ready early and sit in the car and get my game face on. All drivers turn into people we don’t know once they put the helmet on. Lol

How did you get your truck number (#)?
My truck number is actually my son’s number, which he has had for many years. He is driving the majority of the truck races.

If you could have dinner with any three people (alive or dead, real or fictional), who would they be?
Hmmm…First off, it would be Alan Kulwicki. We did know each other and did talk ,when he said something you better make sure you heard it. He was a very interesting guy. Another guy would be Dennis Lampman, we had many long long conversations. He taught me two things about racing: My first thing I ever learned in racing…No matter who gives you anything in the racing world, always say thank you, because those two words can lead into more…and it did over the years, he was right. Secondly, he told me, if you have to ask how much is a part or anything on a race car, you should not be racing. You should be asking how many, again he was right. I loved talking to him, so much knowledge, and so many laughs. Third would be my grandson who was born Oct 12th at 1lb 12oz , and hopefully coming home soon. I would tell him about my lifetime and what I have learned.

A couple of years ago, our Safety Director, Shelley Greenwald, came across some buttons of drivers. One of them had your face on it, and it is now in the Slinger Historical Museum. Do you remember those buttons?
Yes I do remember those. Jean and Al Fortner were very good friends of mine. I would go to races with them and Dave Panske when I was like 12 years old. Anyway they took pics and did the buttons.

Which Slinger driver (past or present) do you respect the most?
I am not sure I can single out just one, there were a lot that deserve this recognition: Lowell Bennett, Al Schill, Both Laufers, Rich Bickle, Conard Morgan, Robbie Reiser, Dennis Lampman, Willie Goeden, Rich Somers, Jim Weber, Jerry Wood, Tony Strupp, Brad JJ Mueller, Johnny Ziegler

I hope we can have a reunion at the track Sunday and live one last memory that I lived for 15 years at Slinger, that was a great ride! I would love to round up the band one more time and share the memories. I am not retiring from racing yet!