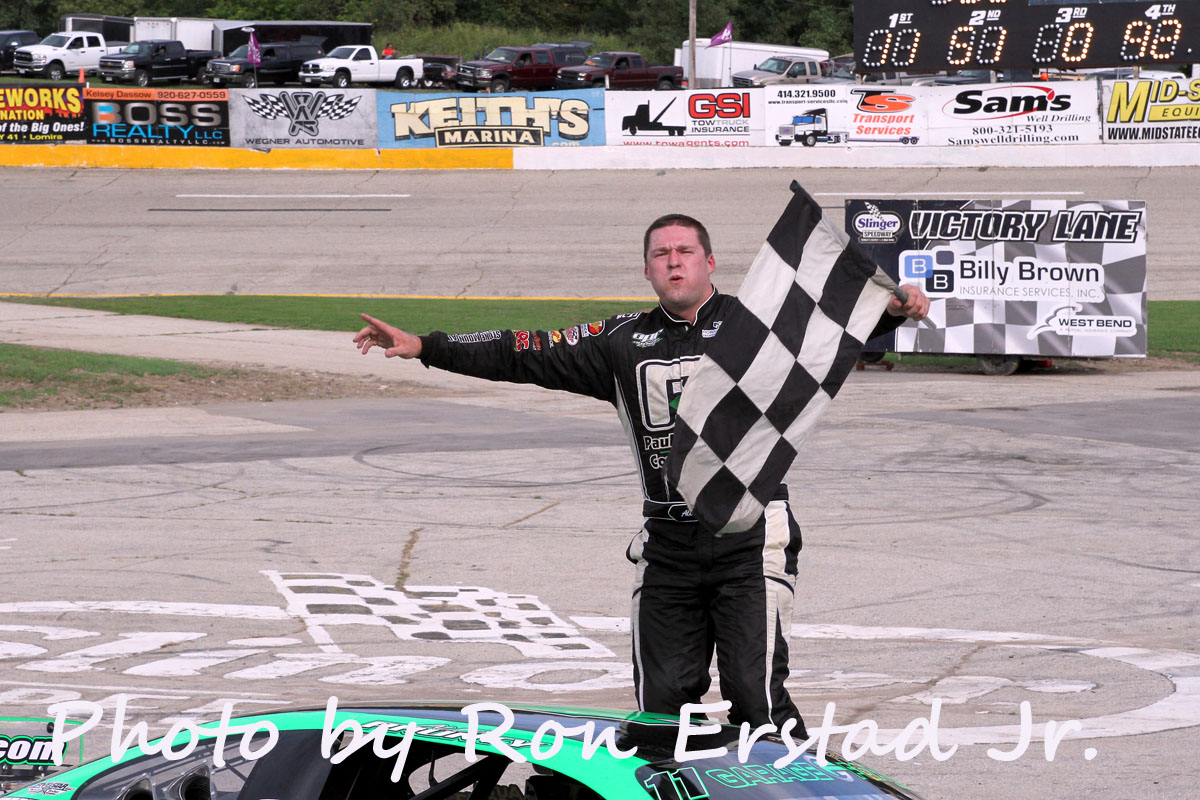 Slinger, Wis., Sept. 18—Alex Prunty used a late charge to take the lead from Steve Apel with six laps to go and drove to his first Elite Eight Super Late Model Series feature victory of the season in the Carl Wegner Memorial 100 Sunday afternoon at the Slinger Speedway while R.J. Braun edged Jacob Nottestad to win the 2022 championship.

Dennis Prunty dominated a majority of the 100-lap super late model main event as he drove to the lead at the drop of the green flag and pulled away to a sizeable advantage over Ryan DeStefano and Steve Apel by the halfway mark. Dennis Prunty’s cruise at the front of the field came to an abrupt end when he suffered a flat tire and slowed on lap 73, drawing the only caution of the race. DeStefano and Apel battled for the lead as racing resumed with Apel using the outside groove to claim the top spot on lap 75 while Alex Prunty moved up to challenge DeStefano for second. By lap 79, Alex Prunty was around DeStefano for second and he began to hunt down Apel for the lead while championship contenders R.J. Braun and Jacob Nottestad raced in fourth and eighth place respectively. Prunty was on Apel’s rear bumper with ten laps to go and took the lead following a slight nudge off turn four with six laps to go. Once out front Prunty was unchallenged as he drove to the victory over Apel and DeStefano. R.J. Braun finished fourth and was crowned the 2022 Elite Eight Super Late Model Series champion while Dennis Prunty rebounded from his earlier issues to finish fifth. Grant Griesbach finished sixth followed by Rich Loch and Jacob Nottestad in seventh and eighth respectively. Brad Keith and Conrad Morgan completed the top ten finishers.

Brad Hetzel won the 50-lap Uptown Motorcars Pro Late Model feature for his first main event victory in six years. Ryan Craine finished a strong second while Ryan Gutknecht was third, driving a car borrowed from Hrmodka Motorsports after his own car was severely damaged in a serious crash on September 4th. Jeff Holtz finished fourth and waited with Gutknecht as the season points were tabulated to determine the Pro Late Model track champion. When the total points from the race and qualifying were added up, Holtz was the winner of the track championship by a mere five points. Jakob Hassler took the checkered flag in fifth place followed by Scott Shambeau in sixth and Brian Holtz in seventh. Tom Berens finished eighth and Willie Nelson was ninth just ahead of Tom Jasinski in tenth. Jakob Hassler was the winner of the 20-lap Pro Late Model last chance race for those drivers who had yet to win a feature in 2022. Willie Nelson finished second and Jerry Eckhardt was third. Tyler Hromadka and Jacob Vanoskey finished fourth and fifth respectively. Tom Berens turned in a lap time of 12.109 seconds to nail down top time honors in qualifying.

Paul Reagles won the 25-lap Super Beez feature and with that claimed the 2022 track championship for the division. John Preston led many laps and finished second while Brandon Tackes was third. Brian Hillringhouse was fourth and Rich Schaefer was fifth. Mitchell Strobel and Brian Hillringhouse were each winners of a Super Beez heat race and Todd Buckley was the fastest qualifier with a lap of 13. 499 seconds.

Tracy Neu and Misty Benn battled for the win in the 25-lap Slinger Bees feature before Neu earned her first main event victory in a close finish. Neu and Benn became the first female drivers to finish first and second in a feature event in the 75 year history of the track. Kendall Becker scored his career best finish with a third place result while Brandon Mennicke and Ricky Gebhard rounded out the top five. Brian Stanczyk won the 16-lap Slinger Bees last chance race for those drivers who had not yet won a feature event in 2022. Misty Benn finished second followed by Jason Clope, Scott Schlafke, and Kendall Becker. Tom Elsinger Jr. was the fastest qualifier with a lap time of 15.263 seconds. Elsinger Jr. was also crowned the 2022 Slinger Bees track champion.

Nick Ostberg won the Figure 8 race over Scott Goetzke and Rick Bruskiewicz. Goetzke was the crowned the 2022 Figure 8 track champion over Bill Shavlik who finished fourth. 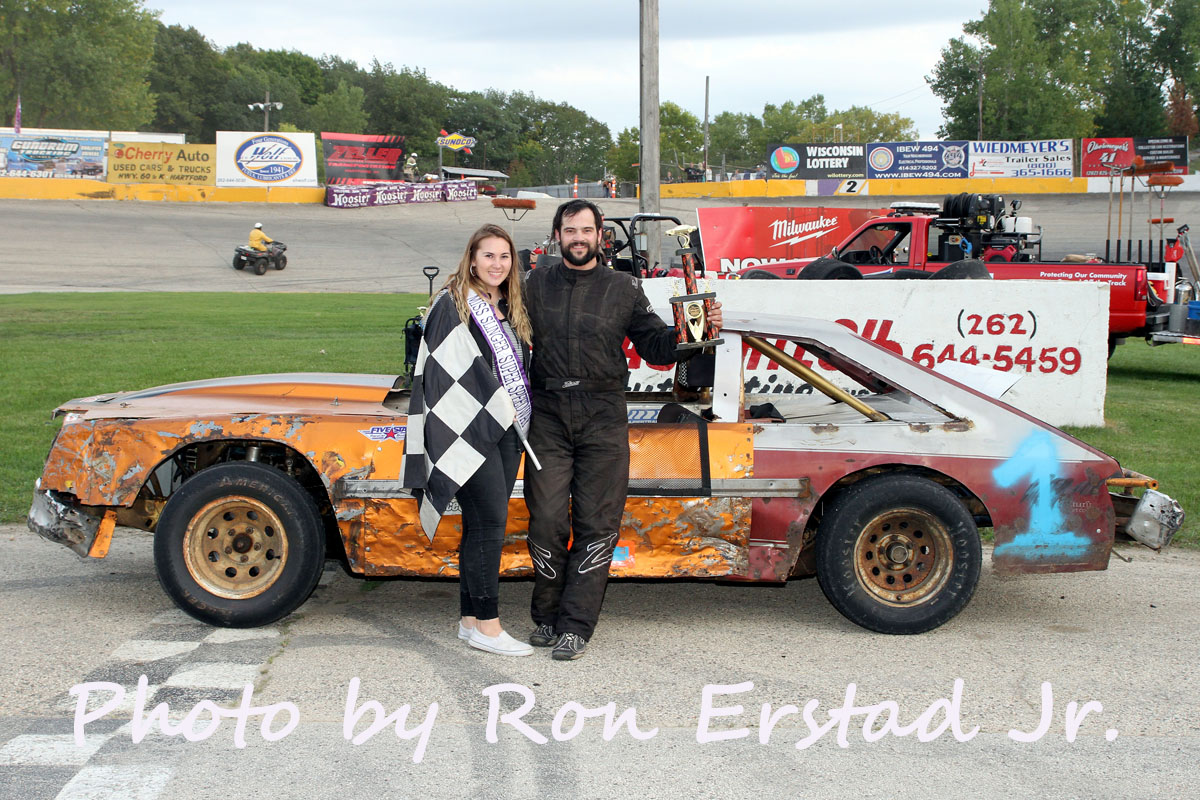 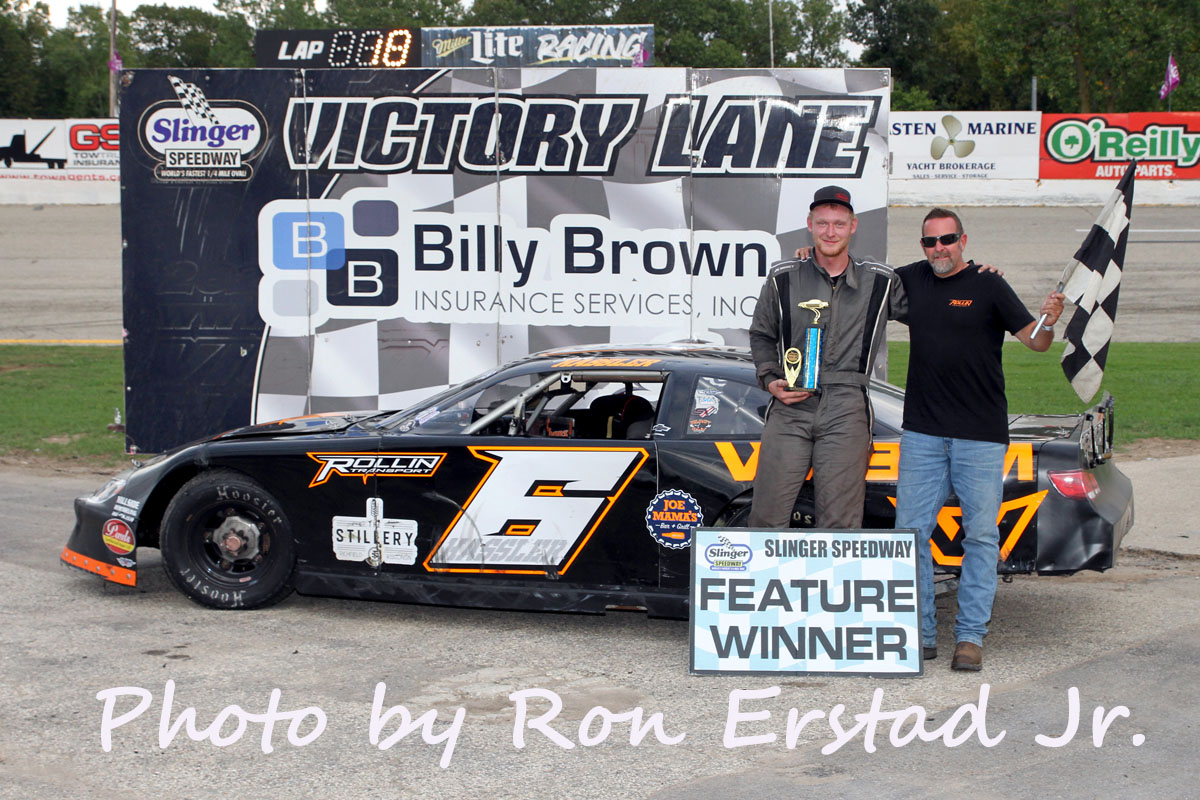 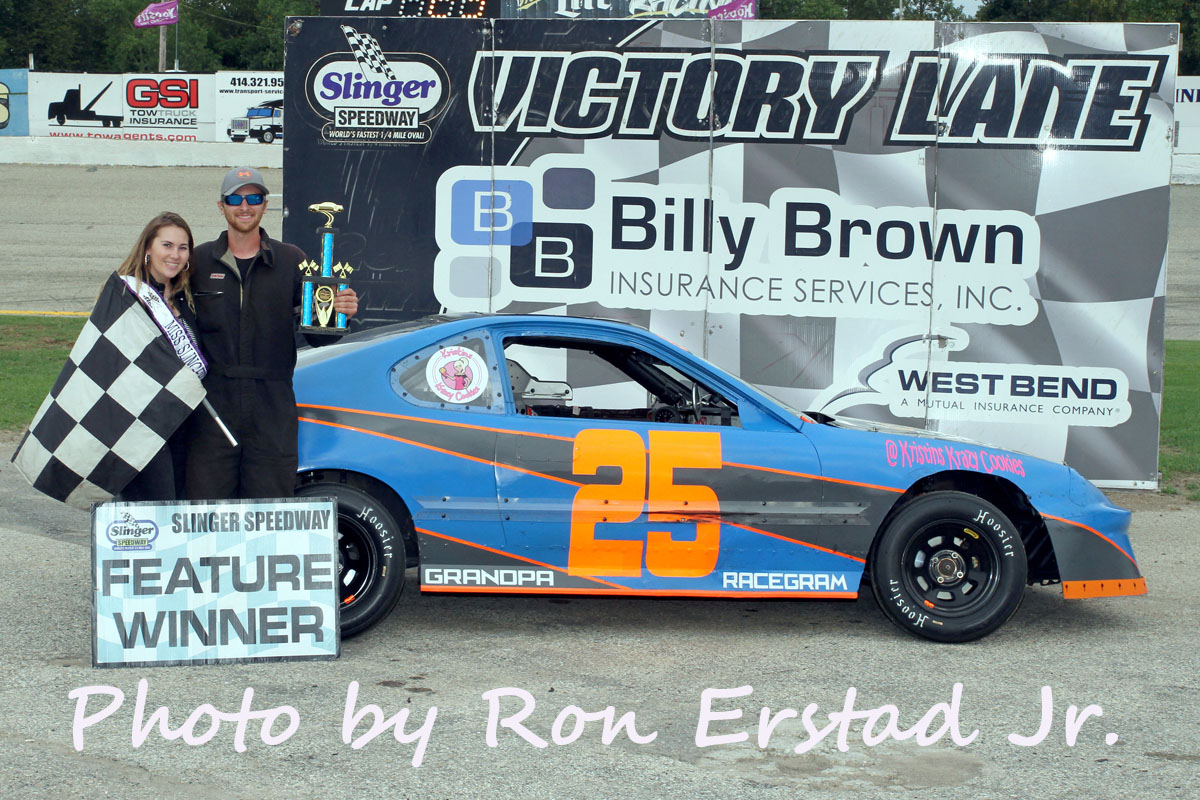 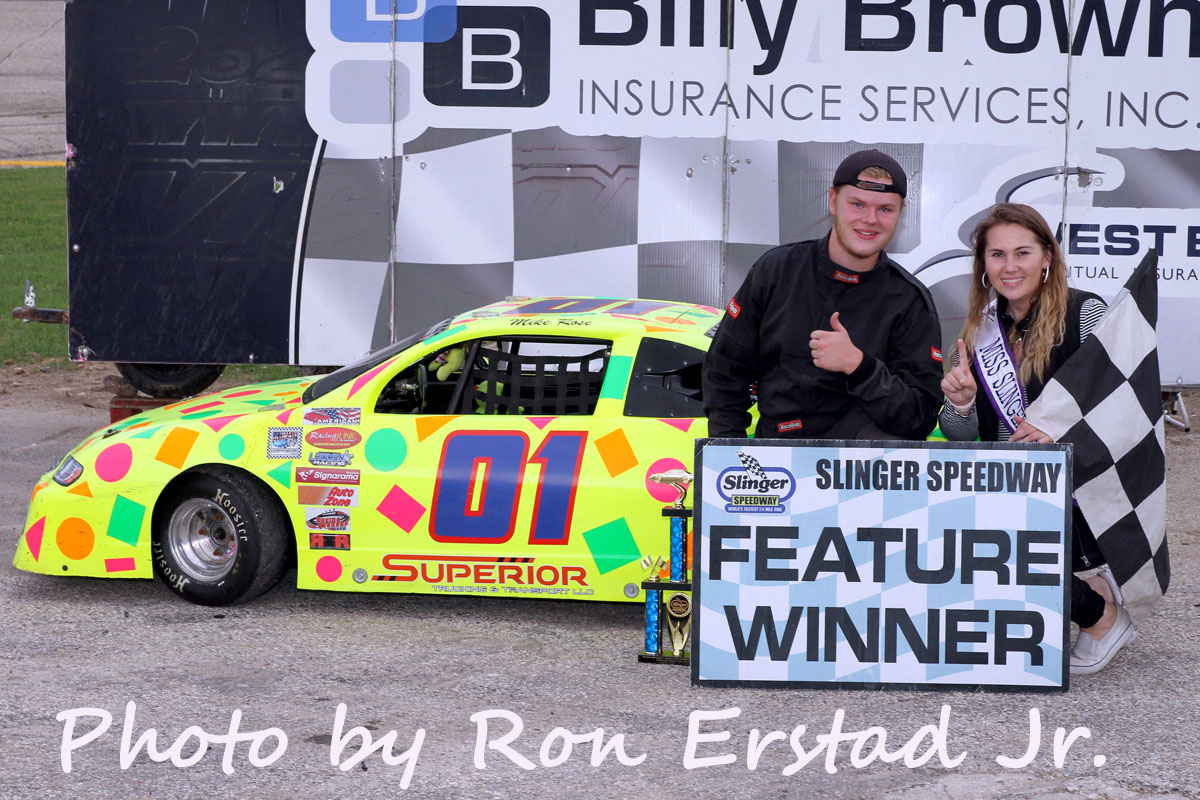 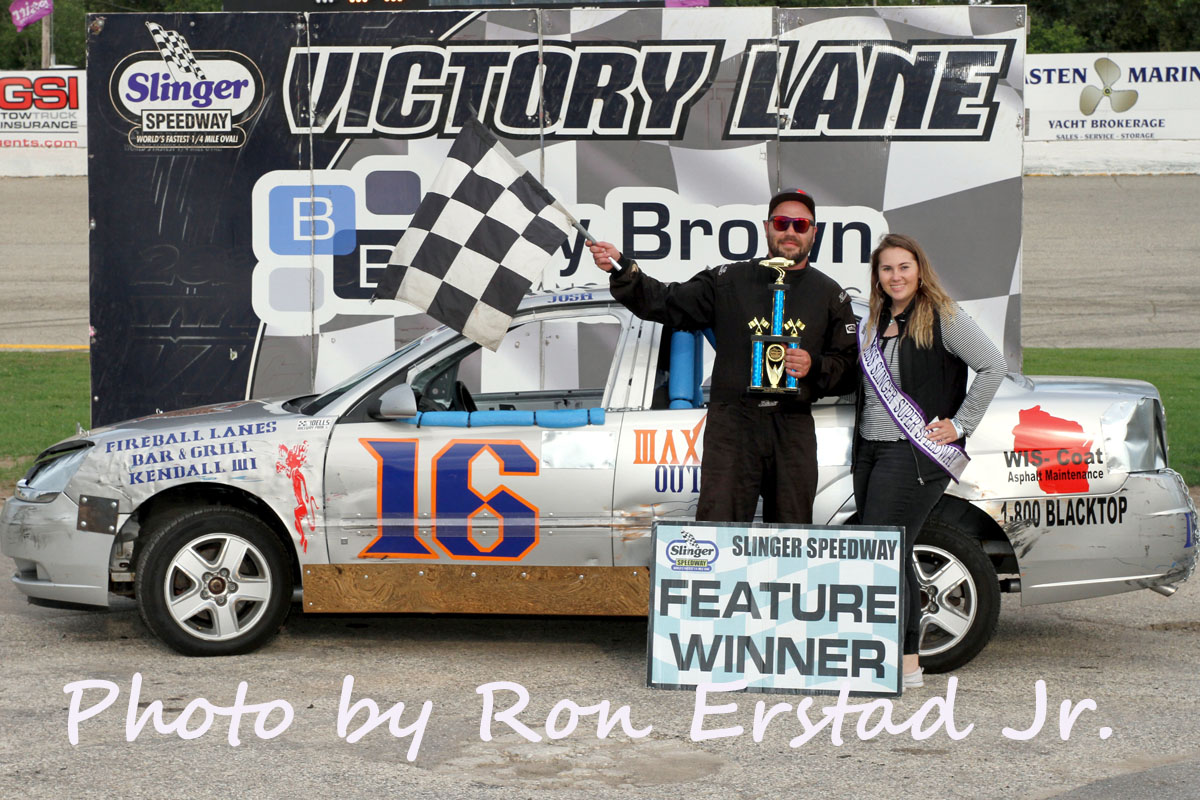 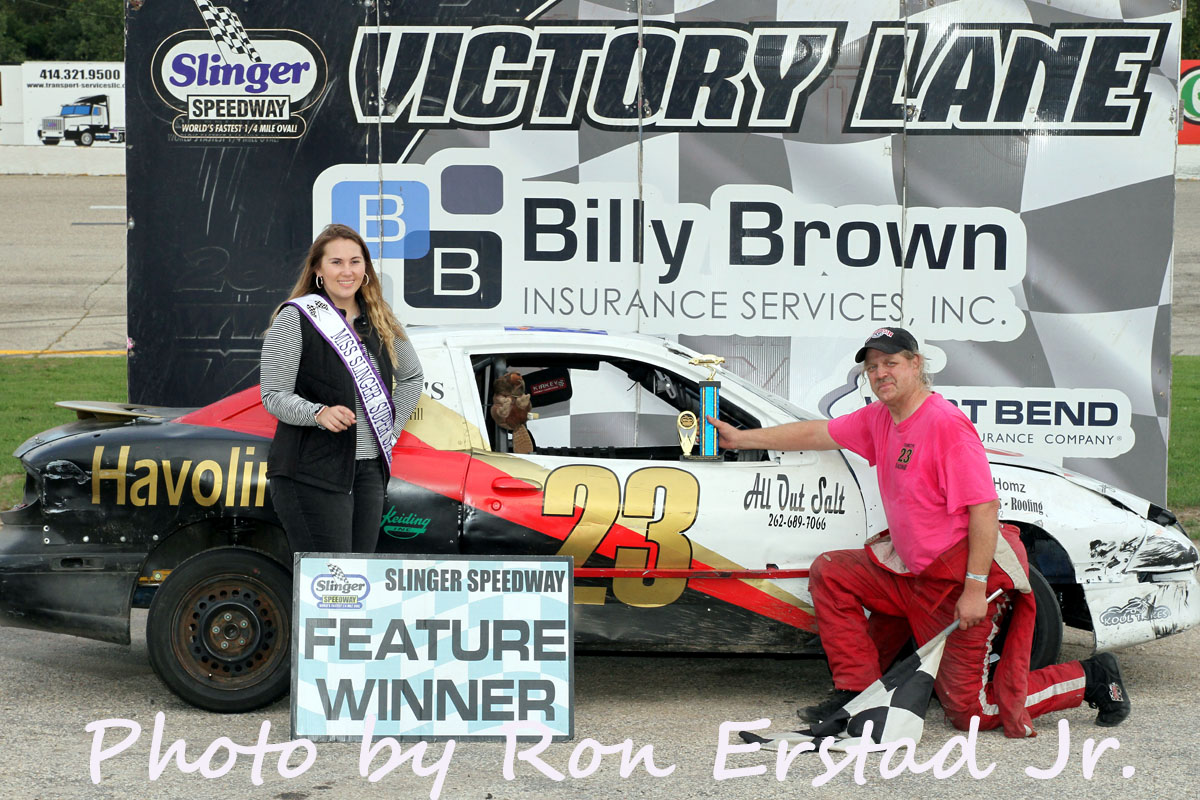 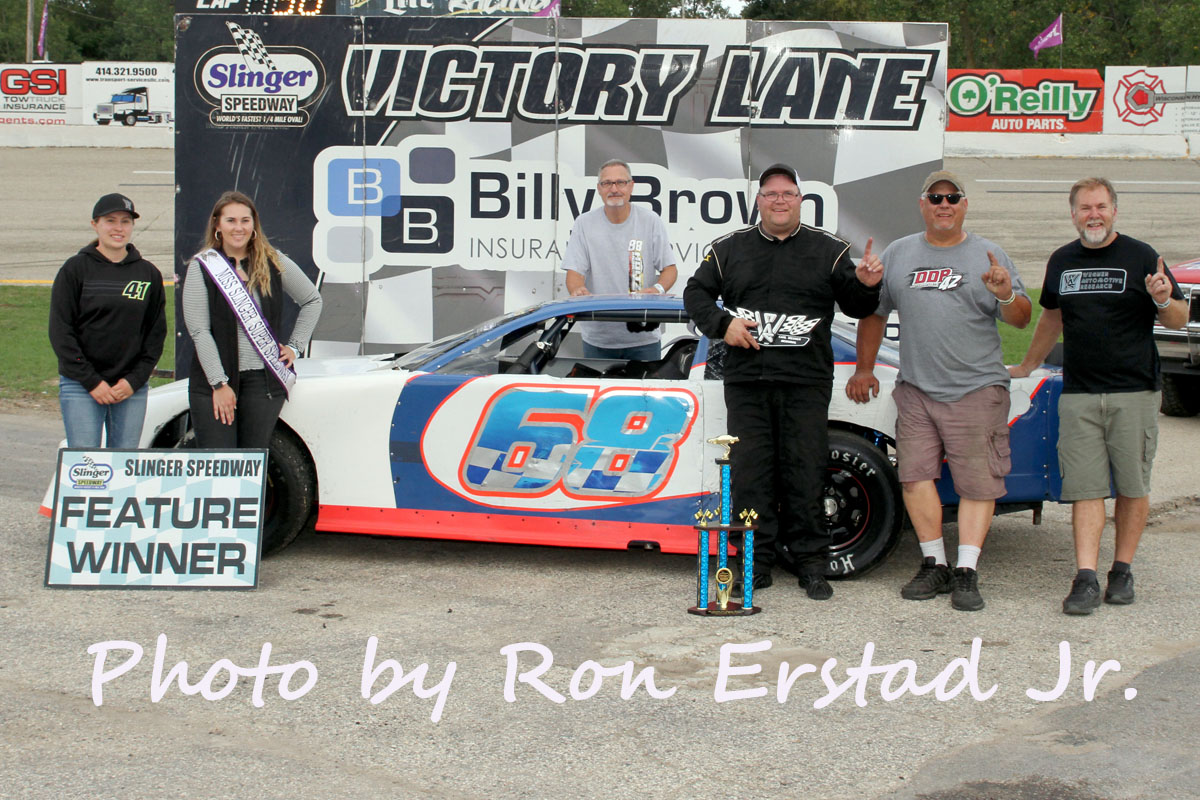 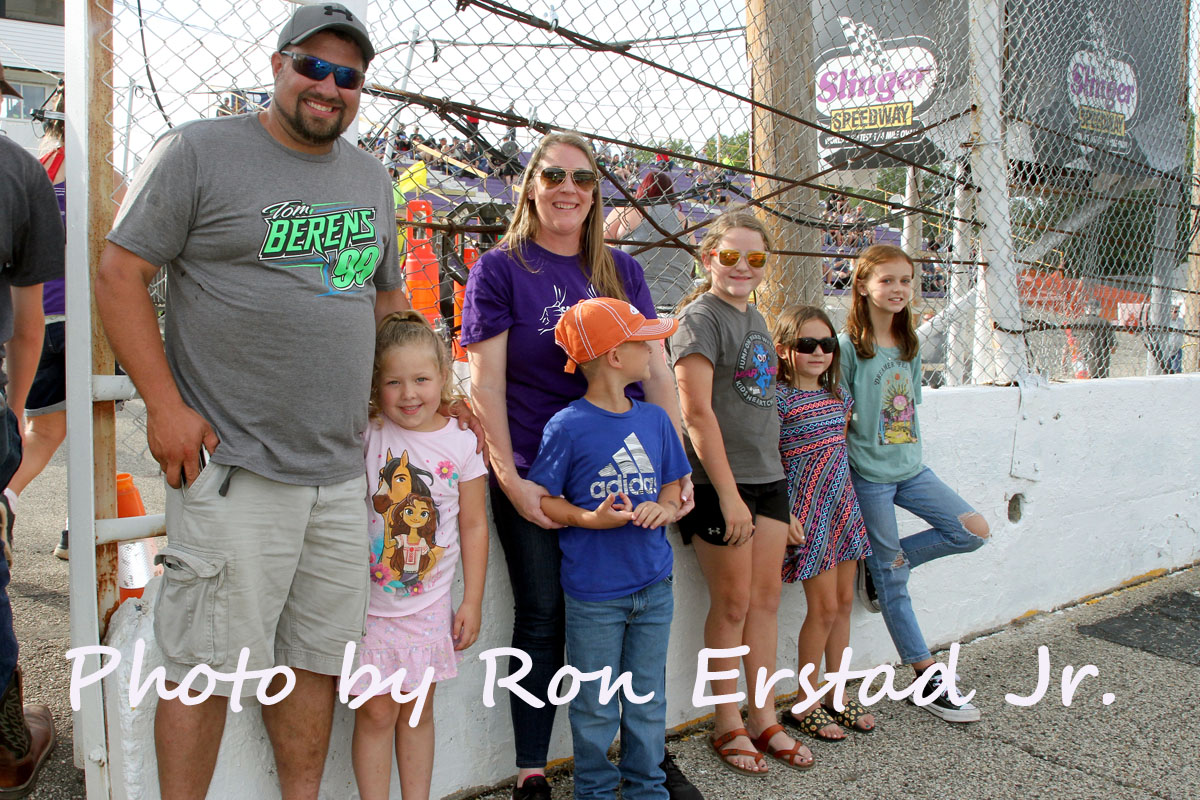 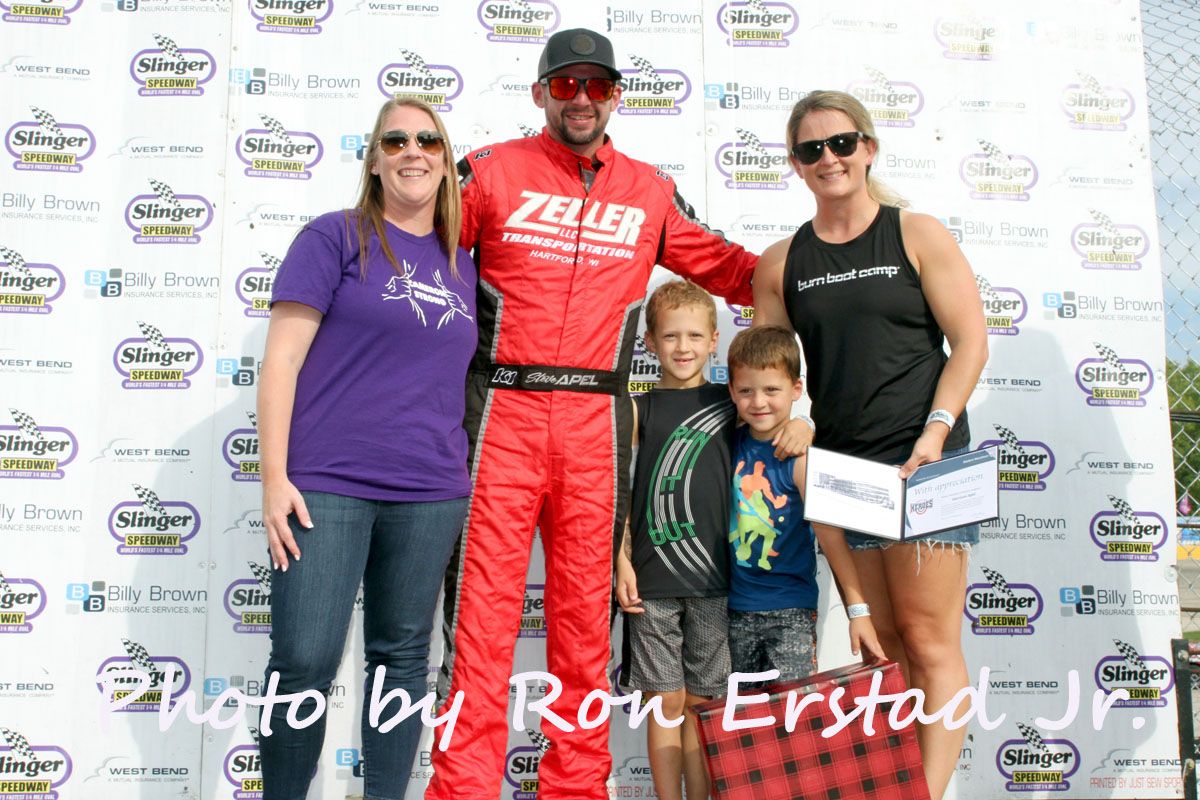 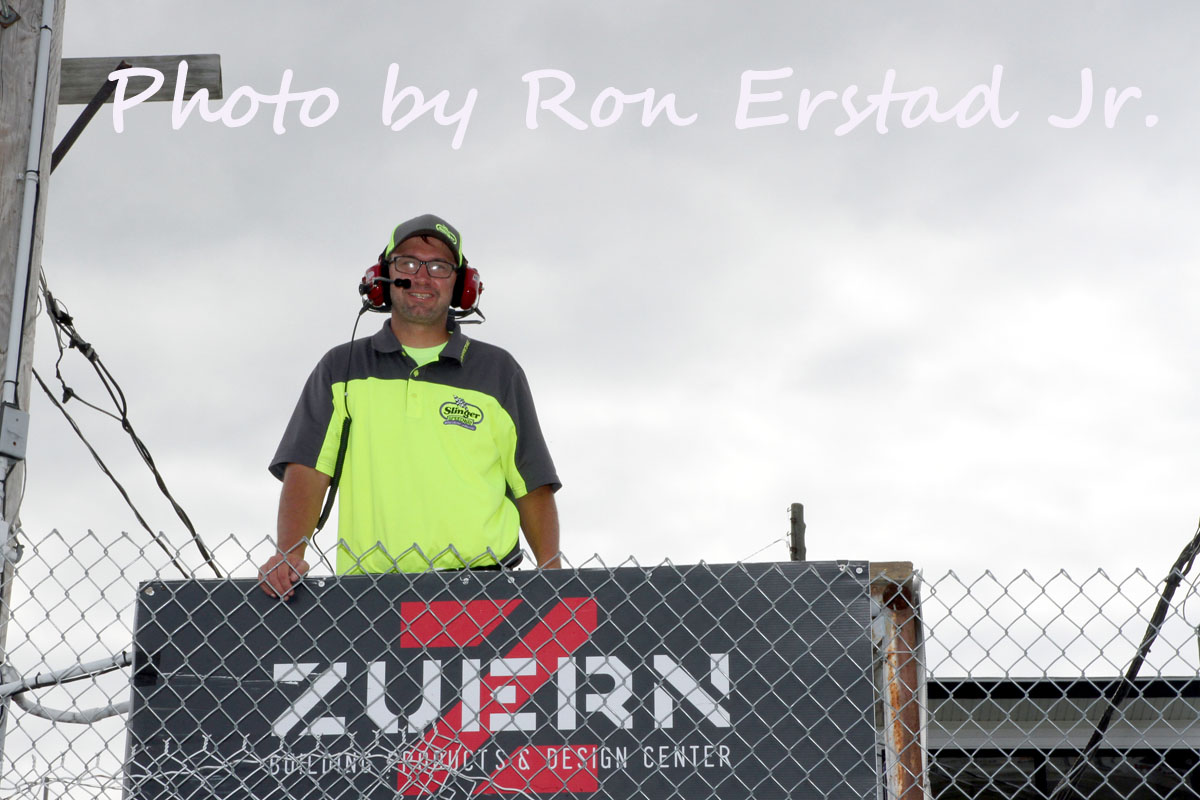 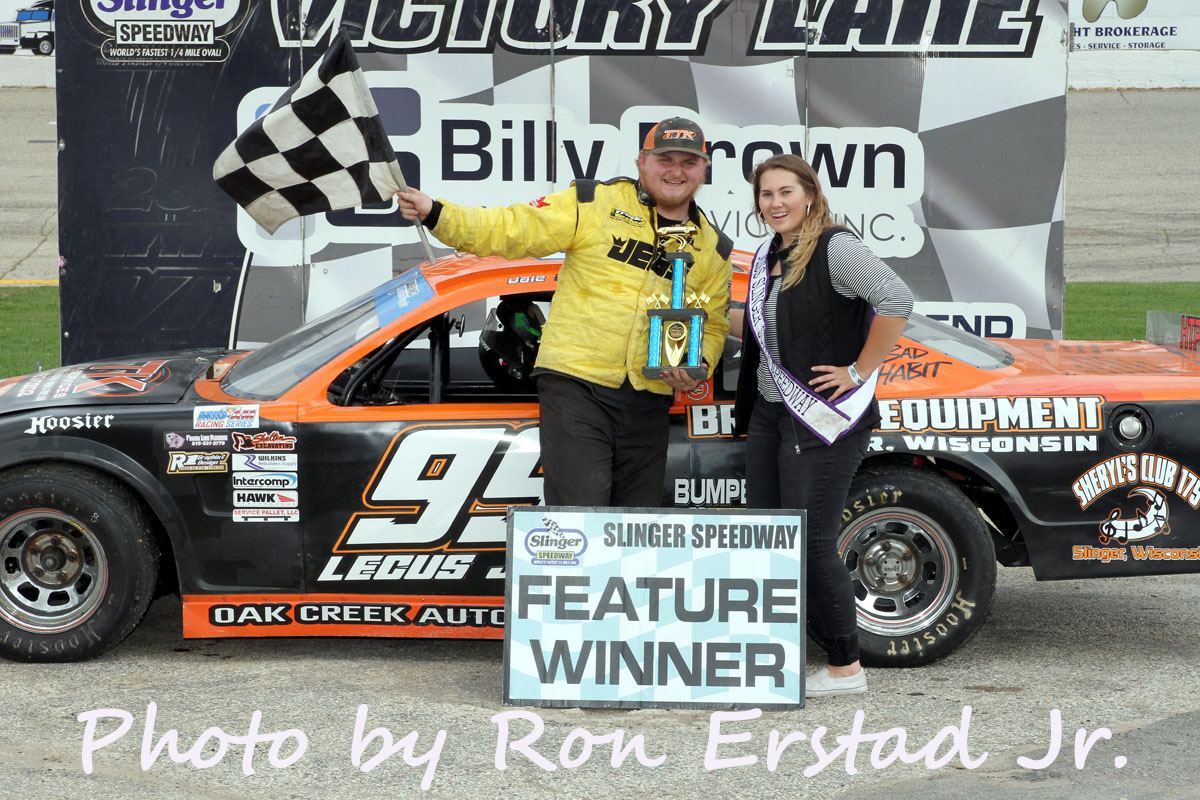 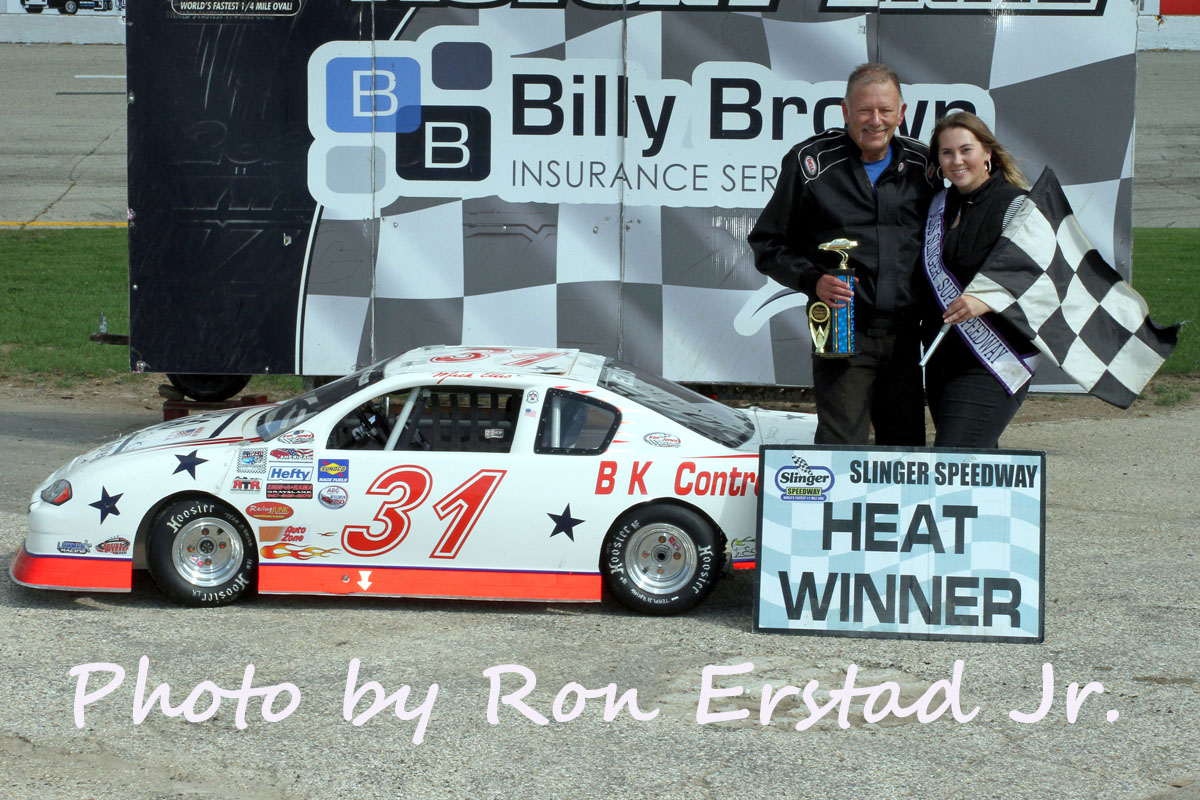 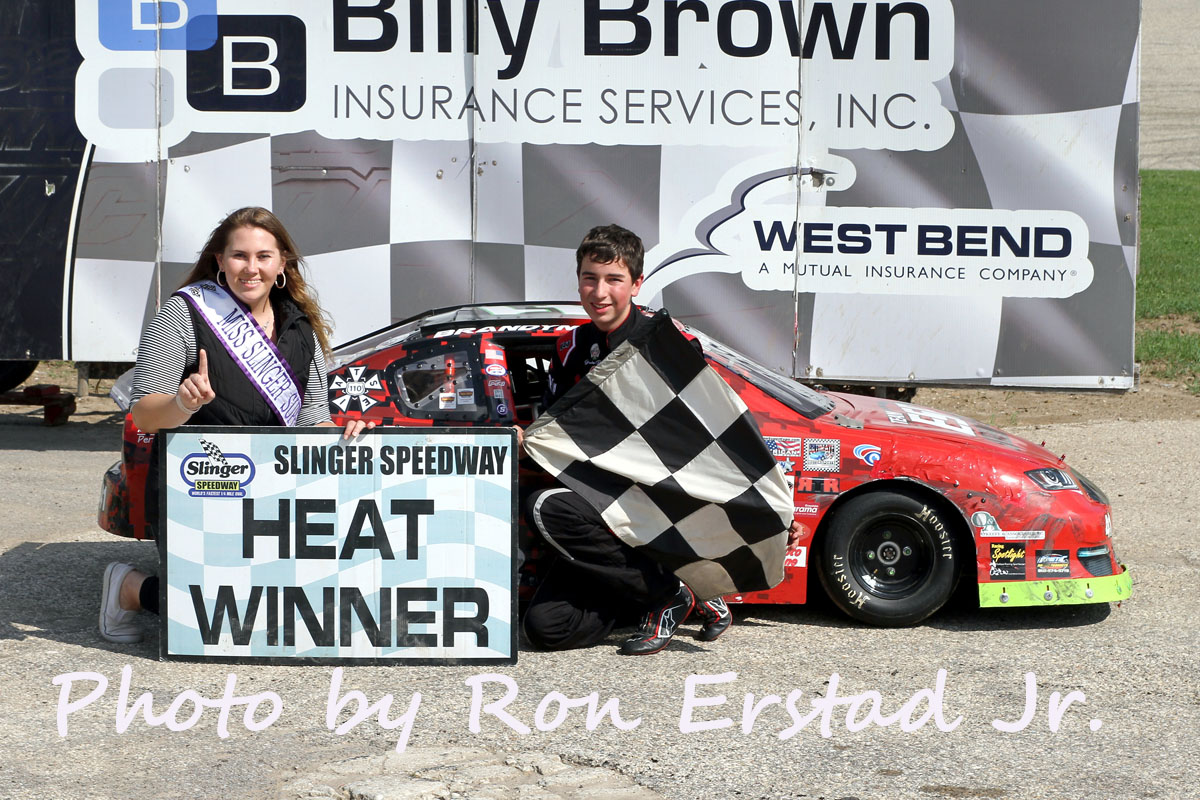 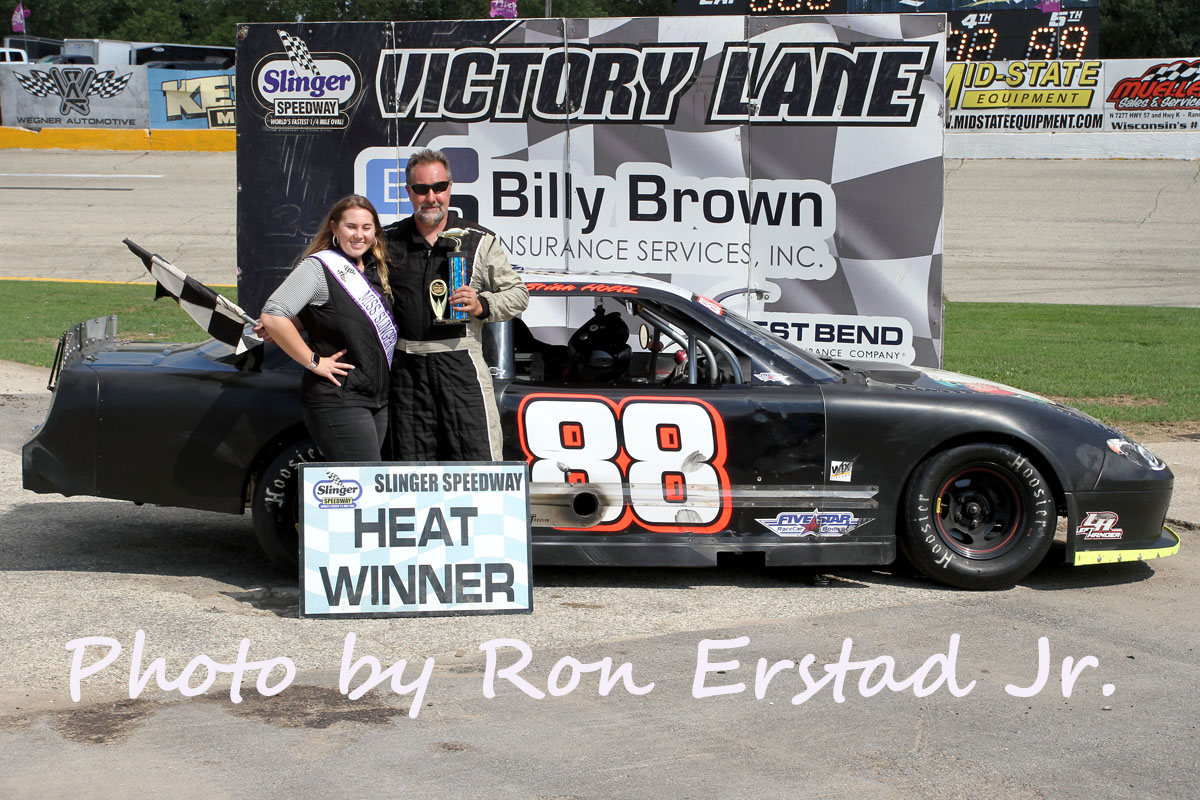 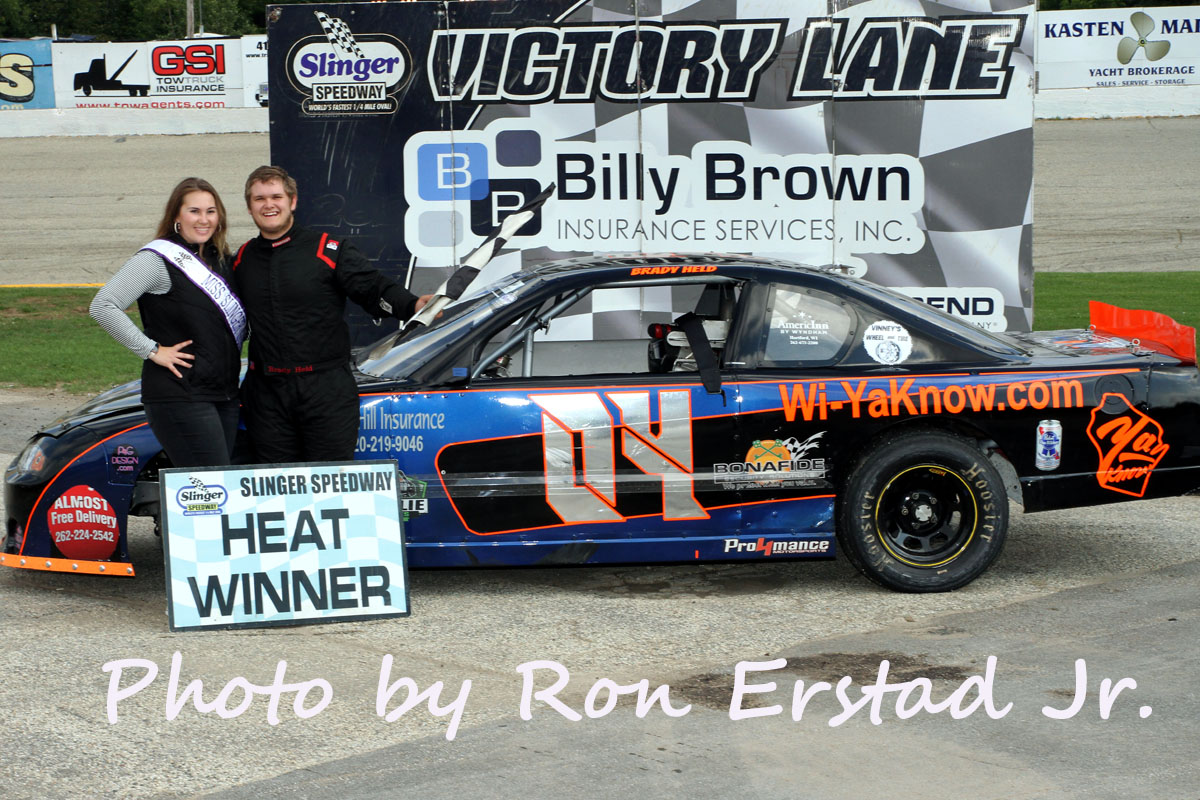